This month Charles has been researching in the graveyards of Swansea. If you have a question regarding YOUR family history that you would like to put to Charles, he can be contacted at swanseafamilyhistory@yahoo.co.uk – he’d be delighted to hear from you.

This month I am looking at the fascinating history of churchyards, cemeteries and the symbols that can be found on headstones. Churchyards and cemeteries can be attractive yet unsettling places. The word cemetery derives from Greek, and means ‘sleeping place’. They can be a haven for wildlife and some will have romantic monuments in decay. Sometimes they can be places that evoke fear of our inevitable fate, and the reminder of our sad losses in the past. There is no typical churchyard – they differ according to denomination, region and date of origin. In this article I will cover some interesting gravestones to be found in and around Swansea.

Firstly, a brief history of the headstone, and when they made an appearance. Burials in churchyards were normally on the South side of the church, on either side of a path and near the nave and chancel walls. The north side of the church was considered unlucky and associated with the Devil. Churchyards vary in size from very small e.g. any Gower church, to the extremely large one e.g. St. Peter’s, Cockett.

Under the care of City and County of Swansea council, there are seven municipal cemeteries; Danygraig (1856), Oystermouth (1883), Cwmgelli, (1896), Morriston (1915), Coedgwilym, Clydach (1920), Rhydgoch, Pontarddulais (1907) and Kingsbridge, Gorseinon (1935). Wales was the first place in the United Kingdom to have a municipal cemetery, St. Woolos Cemetery, Newport, where the burial took place on 1 July 1854, of a sailor named Cooper. The cemetery was used as a location for the BBC series, Doctor Who and Sherlock.

What is a headstone? A headstone or gravestone is a marker that is placed over a grave. The stone may also contain pieces of funerary art. Funerary art could incorporate the following: the personified figures of Death, Time, the Virtues or other figures as well as angels. There are some good examples of these found on graves at St. Matthews, High Street. Located also in this churchyard, in the corner is a series of paving slabs. These represent the mass grave of those people that succumbed to the cholera outbreak in the Greenhill area of Swansea during the summer of 1849, claiming 150 deaths. A sad reminder of Swansea’s not so distance history. Oystermouth Cemetery, has some elaborate pieces of funerary sculpture dating from the 19th century. It was at this time that graves were laid in regimented rows. 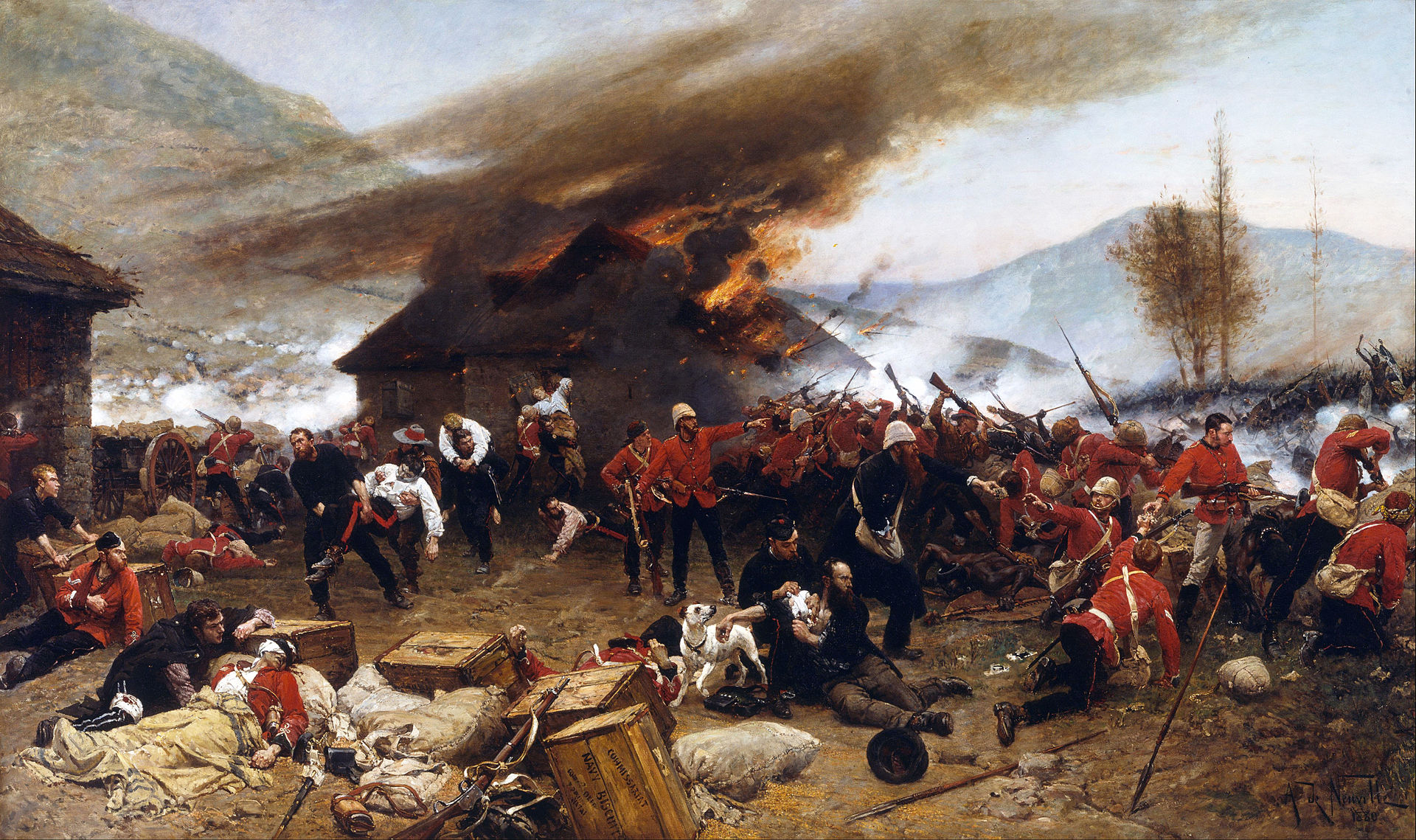 The defence of Rorke’s Drift – 1879, by Alphonse de Neuville

During the early part of the Georgian and Victorian eras, the burial marker was made of wood.   Due to the nature of wood, the marker didn’t last more than 50 years due to the natural decomposition. Many wooden markers have been lost over the years, and the names of those buried are just a distant memory. This is probably what happened to a grave at Bethel Welsh Congregational Chapel, in Sketty. It seems that the grave of James Owen, initially had a wooden marker erected in 1938, it fell into disrepair and was replaced in 2014 with a modern headstone, by the South Wales Monuments Ltd., Caerphilly. He was a veteran of the Battle of Rorke’s Drift, in 1879, where he served under the alias of David Lewis

After wood, came headstones of white bronze which was used between 1874 and 1914. These are equally hard to find as they stand only a few inches above the grave and the inscriptions are near impossible to read. A few examples of these headstones can be found both in St Peters, Cockett and Oystermouth Cemetery. 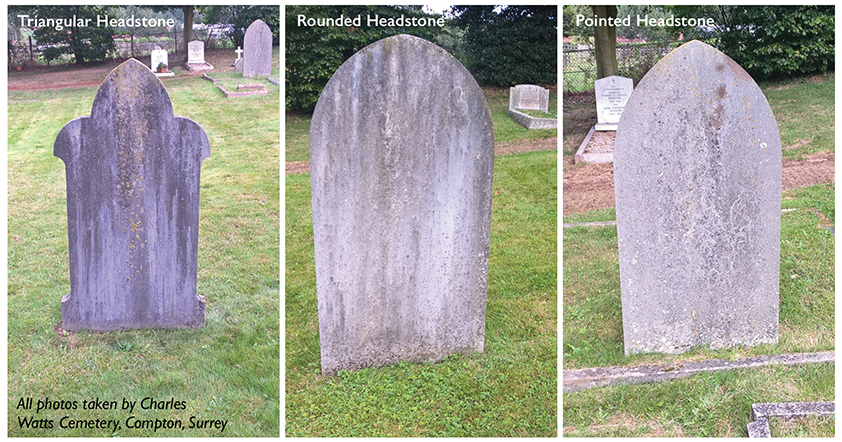 The popularity of erecting a headstone grew during the Victorian period. The most frequently seen headstones are constructed out of granite, marble or other stone materials. In Wales headstones are constructed using either Welsh Granite, Aberdeenshire Sandstone, Forest of Dean Sandstone or Welsh Limestone. It was during the 19th century that the style of the headstone changed, inspired by the architecture of the period. There were three ‘common’ types; triangular-topped, derived from the neo-classical, round-topped from the Romanesque, and the archetypical pointed headstone from the Gothic revival. Other common headstones are the crucifix and the Celtic cross. 19th century epitaphs included, the full name of the person, the date of birth, date of death, and the age. During this period ‘In Memory’ was the common personal inscription. 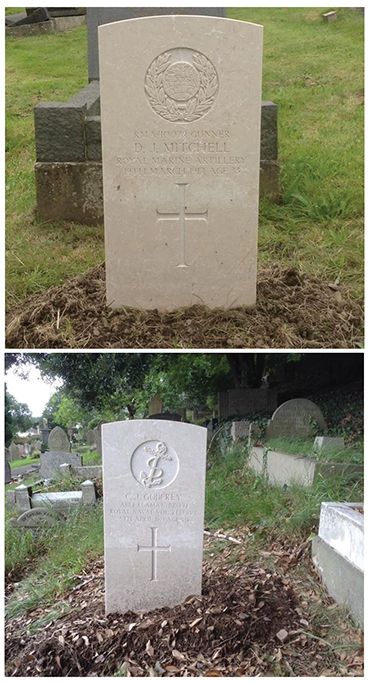 Symbolism was also used – examples and explanations of the symbol are: anchor and chain – firm faith in salvation, bird flying down – with Holy Spirit, bird flying up – the Spirit ascending, broken column – cut off in the prime of life, circle – sign of eternity, clasped hands – hope of reunification in the next life, IHS – an abbreviation of Iesus Hominum Salvator, Jesus in Latin and an urn – the symbol of death.

According to the Commonwealth War Grave Commission there are 472 war graves in and around Swansea. In my article from last November, Remembrance Sunday, I wrote about the information that can be obtained from a military headstone. During my research I wrote an article, Military Service Papers, October 2015, about two burials at Danygraig Cemetery, St. Thomas, of David James Mitchell and Charles James Godfrey, who didn’t have a military headstone. I can report that since August, 2016, they both have a newly erected headstone.

Though the saddest of all of the military burials, is that of the Unknown Sailor buried at St. Illtyd’s Church, in Oxwich, who was washed ashore in 1916 and buried by the locals.

We have one Quaker and two Jewish cemeteries in Swansea. The original Jewish cemetery is located off North Hill Road, Mount Pleasant. It was here that shopkeeper Bernat Hecht, father of Michael Howard, MP, QC, was buried in 1966, later to be exhumed in 2009 and reburied in a Jewish Cemetery, in London.  The oldest Jewish cemetery in Wales was opened in 1768 and by 1965, was practically full. The ‘new’ cemetery was opened in 1962, and located at Oystermouth Cemetery. The Quaker Cemetery situated at the back of the Grand Hotel, High Street was opened in 1692, but is today sadly overgrown and hidden by brambles. 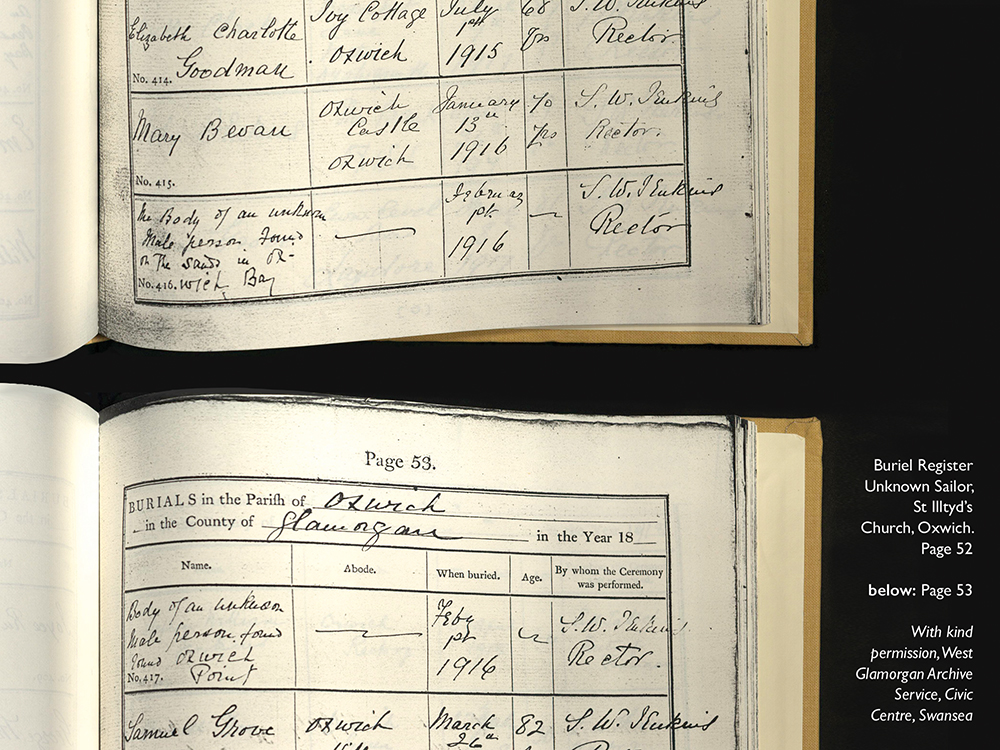 A final note, Burial Registers for churches are very important as they record the name, abode, date buried, age and who performed the ceremony. Burials Registers for Chapels, record when the plot was purchased, and not when it was first used.

Here’s a case for Sherlock. I have copies of the Burial Register from St. Illtyd’s Church, Oxwich, for the Unknown Sailor as mentioned earlier. There appears to be two entries for him; this could be for one of two reasons. Firstly that it is a simple mistake or secondly that there were two sailors found on the beach and they are buried under the one headstone. If any of you have the answer, do let me know.