EARLIER THIS SUMMER, LIZ WENT IN SEARCH OF THE SUNSHINE THAT HAD FAILED TO MAKE ITS APPEARANCE IN SWANSEA. SHE FLEW OUT FROM CARDIFF TO MALTA AND OF COURSE SHE TOOK HER CAMERA! 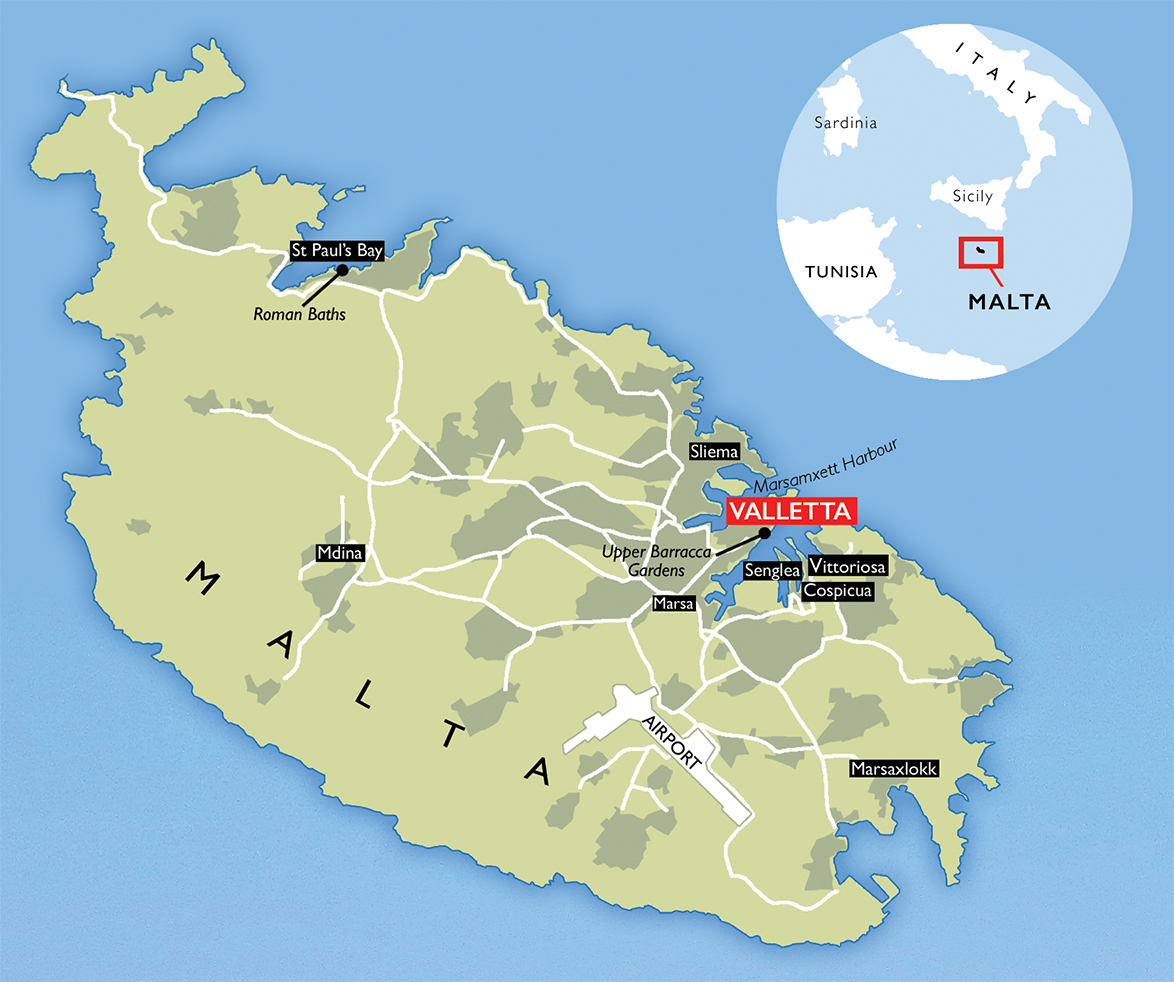 MALTA or the REPUBLIC OF MALTA as it is officially known, is an archipelago in the Mediterranean Sea which lies between the island of Sicily and the North African coast.

The capital, Valletta has been declared Europe’s Capital of Culture in 2018. The city was constructed by the Knights of St John as a refuge to care for injured soldiers and pilgrims during the Crusades in the 16th century. Today it is the island’s commercial and financial centre and throngs with tourists.

The Upper Barracca Gardens, offer one of the best views overlooking the Grand Harbour and out across the water to the three cities, Vittoriosa, Cospicua and Senglea. 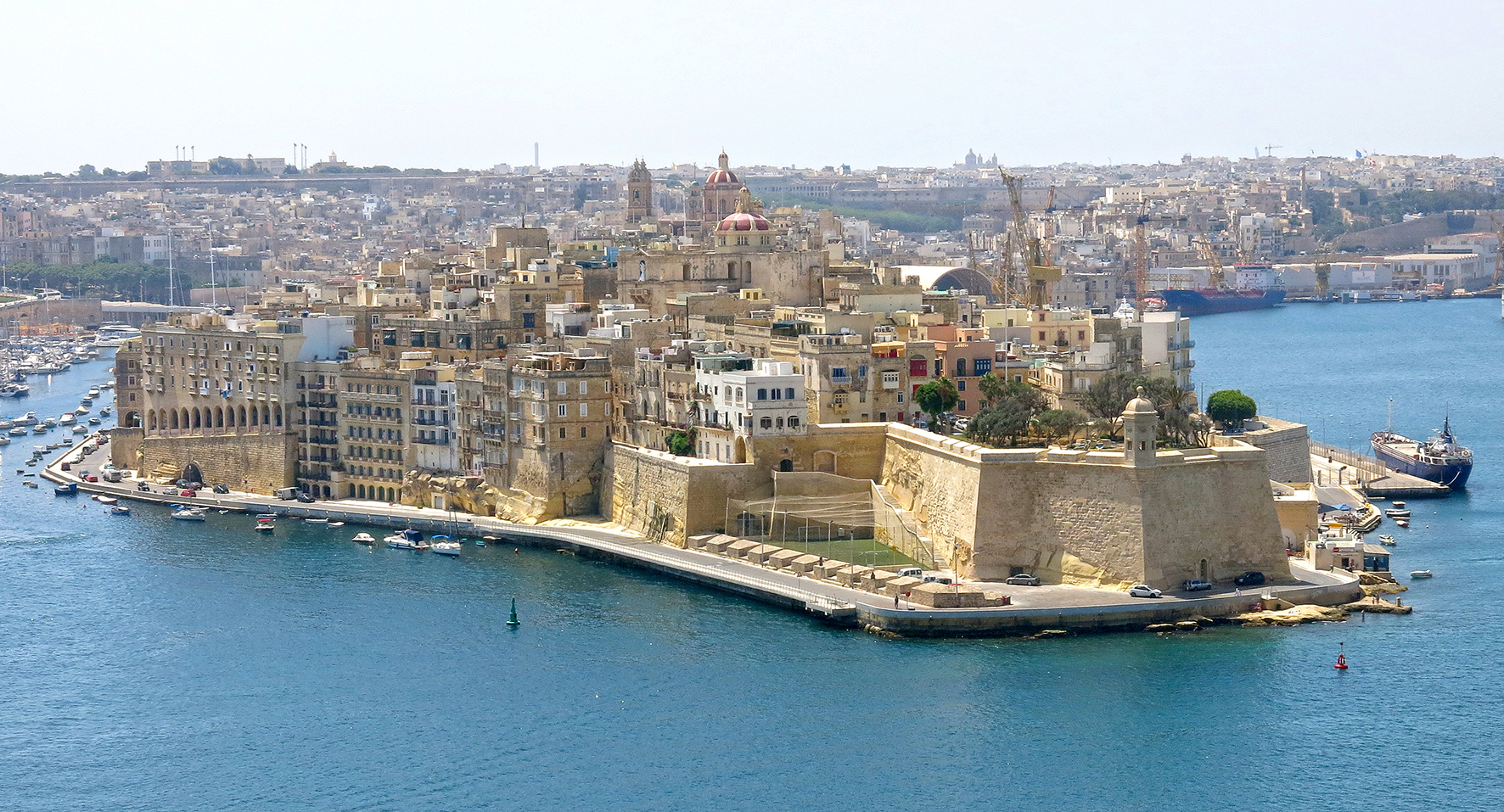 View of the three cities Vittoriosa, Cospicua and Senglea

A walk through the narrow picturesque streets uncovers Malta’s maritime heritage. As midday approaches, crowds of tourists, cameras at the ready, gather along the terraces, eager to capture the shiny black cannons firing the noonday gun, from the saluting battery in the gardens below.

The city of the Knights doesn’t disappoint, many examples of its baroque architecture and art can be seen in St John’s Co-Cathedral. Here are to be found works by Caravaggio who was made an official painter to the Order, by Grand Master Alof de Wignacourt who commissioned him to paint ‘The Beheading of John the Baptist’ and ‘St Jerome Writing’. Later Caravaggio fell from grace and was imprisoned. In an attempt to build bridges he painted ‘Salome with the Head of John the Baptist’ and depicted his own head on the platter. He sent the painting to Wignacourt as a plea for forgiveness. This painting can be found in the National Gallery in London. 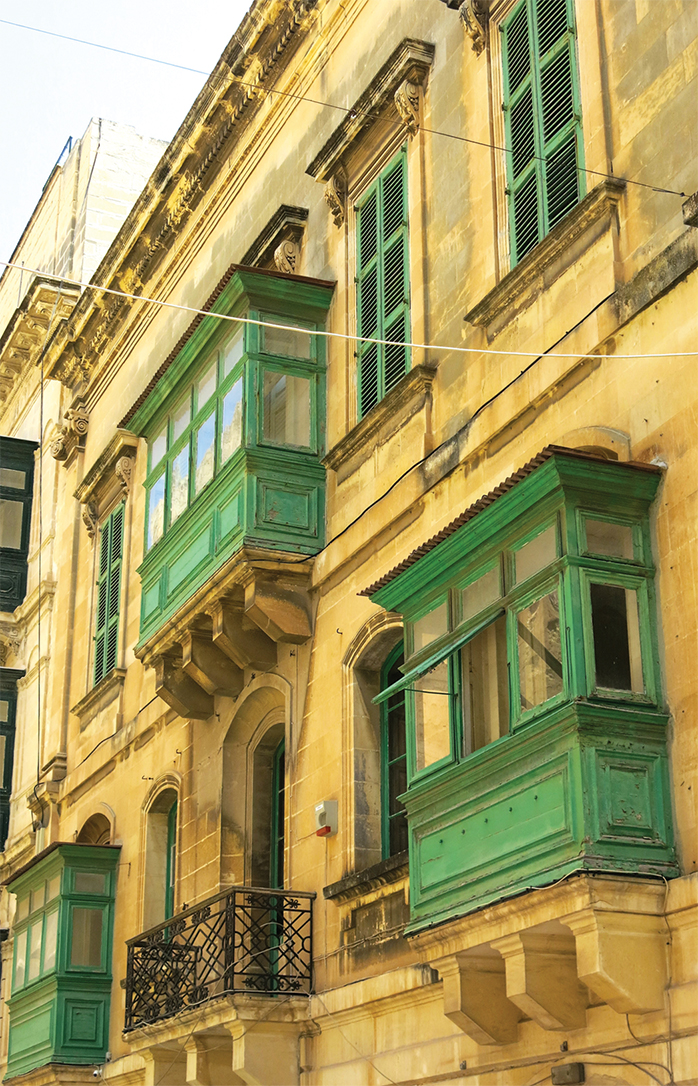 Simpler but no less impressive are the beautifully painted traditional closed wooden balconies, on the façades of the honey coloured stone buildings – like hanging gardens showcasing the skills of master craftsmen. 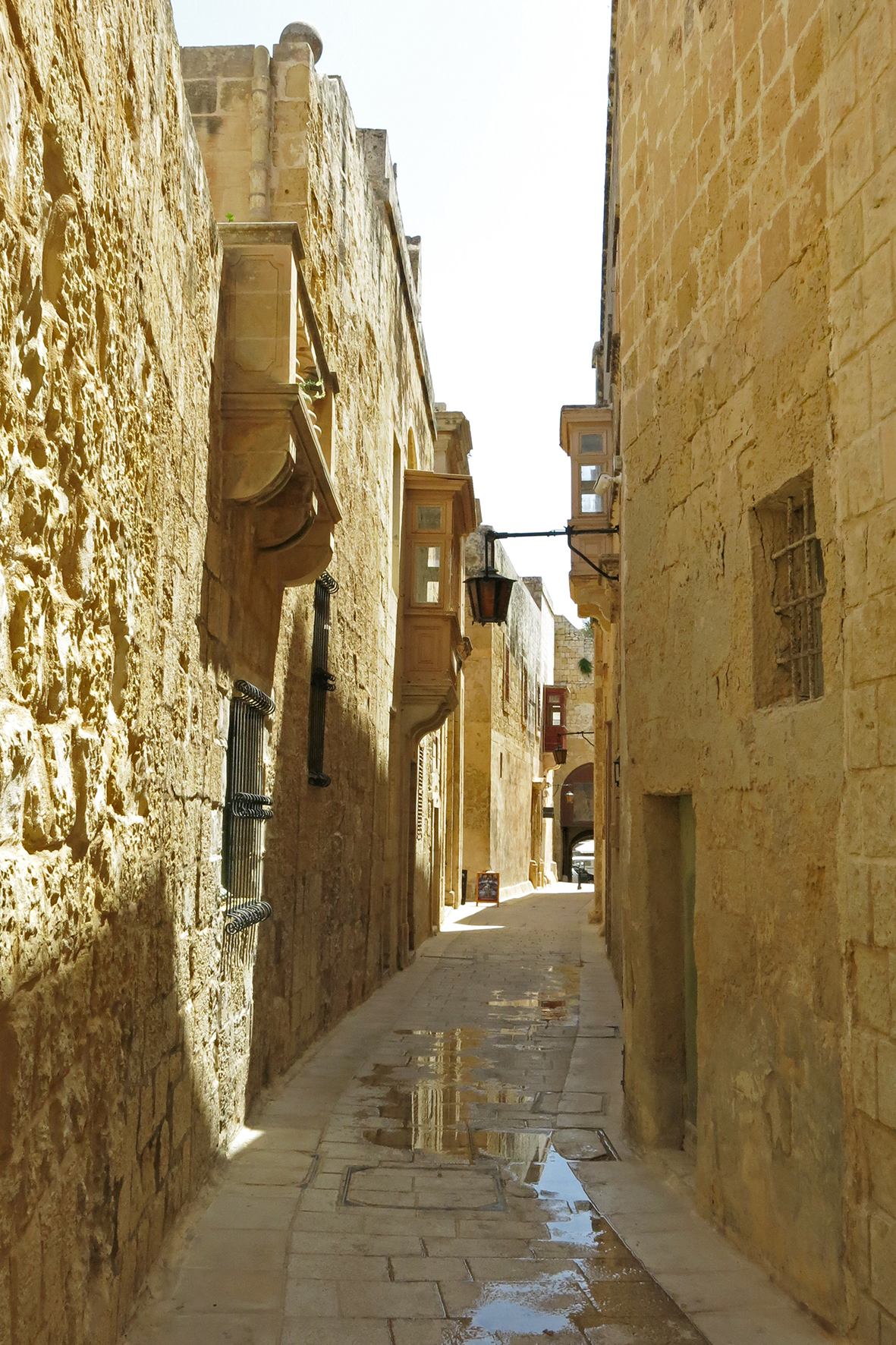 The enclosed streets of Mdina

In contrast to the bustling streets of the city’s capital, a walk through the Mdina, the medieval walled town and former capital until 1530, is like stepping back in time. Vast walls hung with wrought iron lanterns protect the streets from the sun; it’s a fascinating place where once you are within, you feel safe, protected and far removed from the world outside. Cafes with panoramic views over the Island nestle along the walls, the echo of metal-shod horses hooves clinking along the stone thoroughfares as visitors explore from the shade of a carriage – the town is car free except for those owned by residents. Richly painted doors of red, green and blue adorned with knockers of brass, many in the form of curva-ceous dolphins are set in the walls, the entrances to homes of nearly 300 people who live here. When evening falls and tourists leave they claim back their “Silent City”. 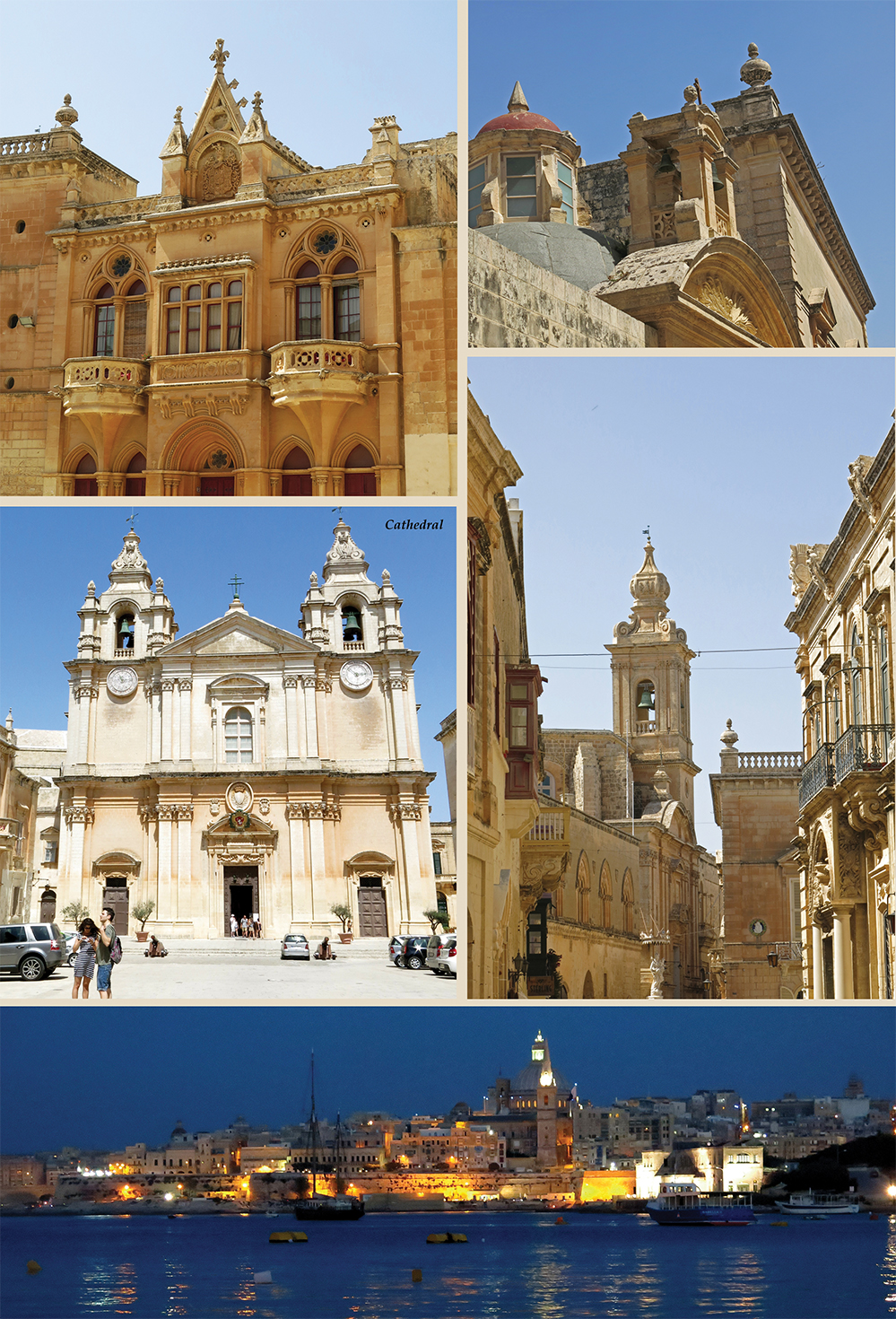 In the evening a stroll along the waterfront prome-nade of Sliema makes for a picture postcard view as the magnificent fortifications and church domes of Valletta are bathed in golden light. Then with a flick of a switch the lights of the city are turned on and their jewel like reflections sparkle in the deep waters of Marsamxett Harbour far below. 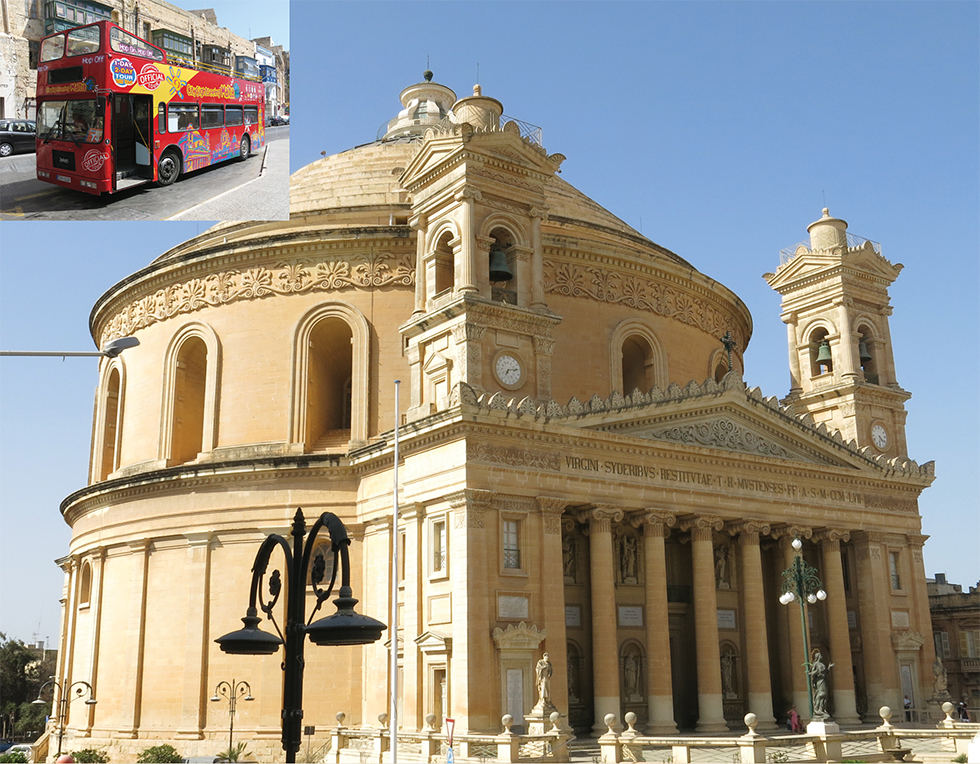 Travelling around Malta is easy, there is an inexpensive and efficient public transport network or you can opt to buy a one or two day pass for the Hop-On-Hop-Off sightseeing buses. From a seat on top of the open air double decker I was able to get a flavour of the Island aided by a set of personal head-phones and English commentary. With only a week’s stay it was impos-sible to visit all the sites. In particular I would have liked to have gone into the Mosta Dome – one the most impressive churches in Malta with its massive rotunda, the third largest unsupported dome in the world. Also a major tourist attraction for another reason – the display of a replica bomb, as during the Second World War the church was nearly destroyed when on the morning of 9th April, 1942 a 200kg bomb fell through the dome without exploding. Miraculously the 300 people attending mass were left unharmed. I didn’t get to go inside but I did get a photo from the great vantage point on the upper deck of the red bus. 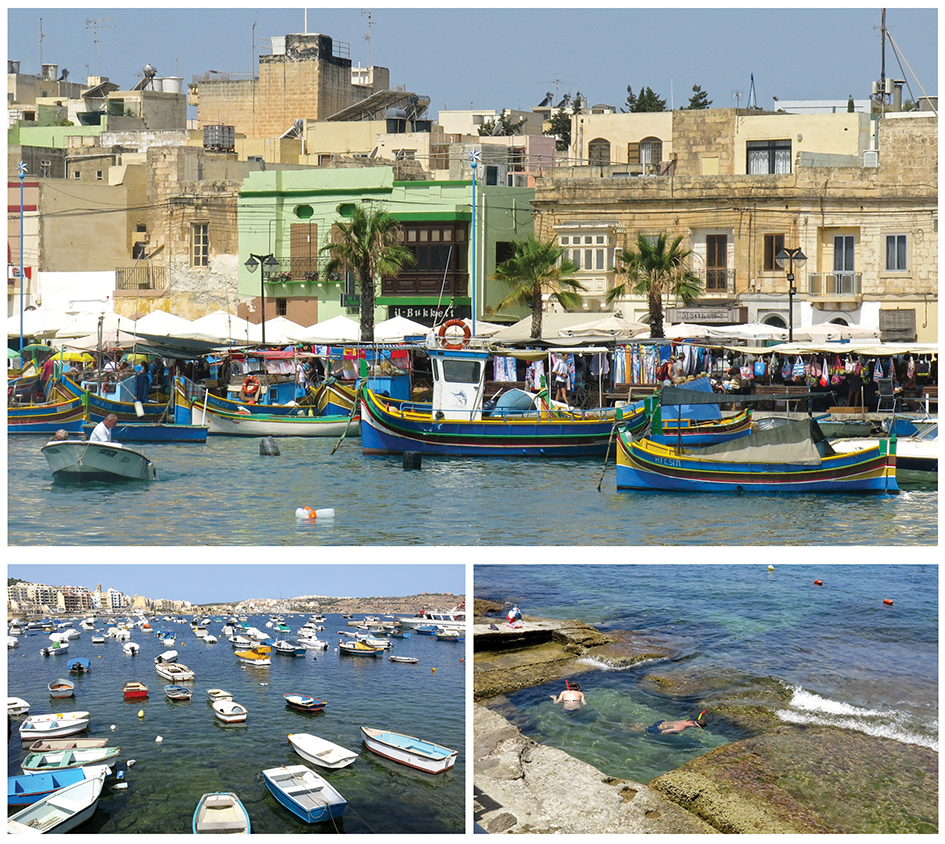 With over 300 days of sunshine a year, Malta lures visitors who want warm days and equally warm sea. There are plenty of water sports and diving opportunities with a multitude of wrecks around the coast. As well as many sandy beaches parts of the coastline are rocky; in these spots entry into the sea is aided by built in ladders. At Sirens Bay a few minute’s walk along the coast from St Paul’s Bay, (where according to legend the ship carrying the Apostle was wrecked in 60 A.D.) you can snorkel or swim in the lovely shallow pools of Roman Baths, edges lapped by the Mediterranean sea as it washes over the classic footings. 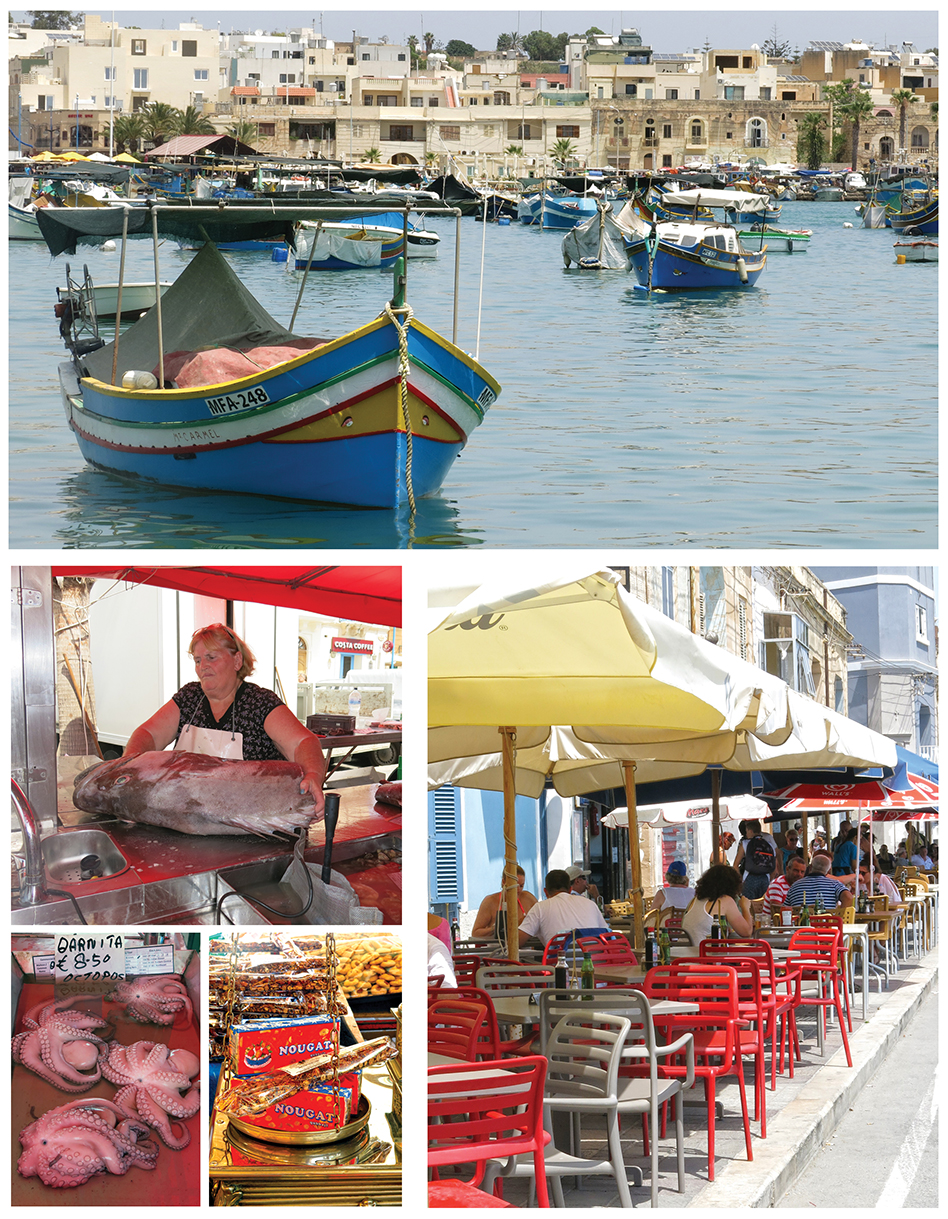 The sea and fishing play an important part in the Maltese way of life; the largest fishing harbour on the island is at Marsaxlokk. Fishermen supply the fish market in Marsa during the week while on Sundays they sell their catch directly to the locals from stalls set out along the harbour walls. The Sunday market is also popular with tourists as there are many stalls selling crafts, souvenirs alongside, the octopus, prawns and fish. The pavements opposite are lined with family owned and run cafes and sea food restaurants, creating a lively street party like atmosphere.

Within the sheltered harbour you’ll find traditional fishing boats painted in bright shades of yellow, red, blue and green – on the bow is painted the eye of Osiris, which is believed to protect the boats from dangers at sea – a custom passed down from the ancient Phoenicians.

Throughout the summer, towns and villages hold festas in honour of their patron saint. The festivities combine church services alongside marching bands, street parties and after dark, firework displays culminating on the Sunday evening when the Saint’s statue is carried shoulder high in a pro-cession through the streets. Visitors are welcomed and it is a great way to meet the local people, experience their warmth and friendliness and gain a brief insight into the traditions, culture and rich legacy of one of the oldest civilisations in the Mediterranean.