The story of FANNY IMLAY serves to illustrate that deceit, betrayal and family upsets are not a new phenomenon – a 19th century Jeremy Kyle would have had a field day with this lot 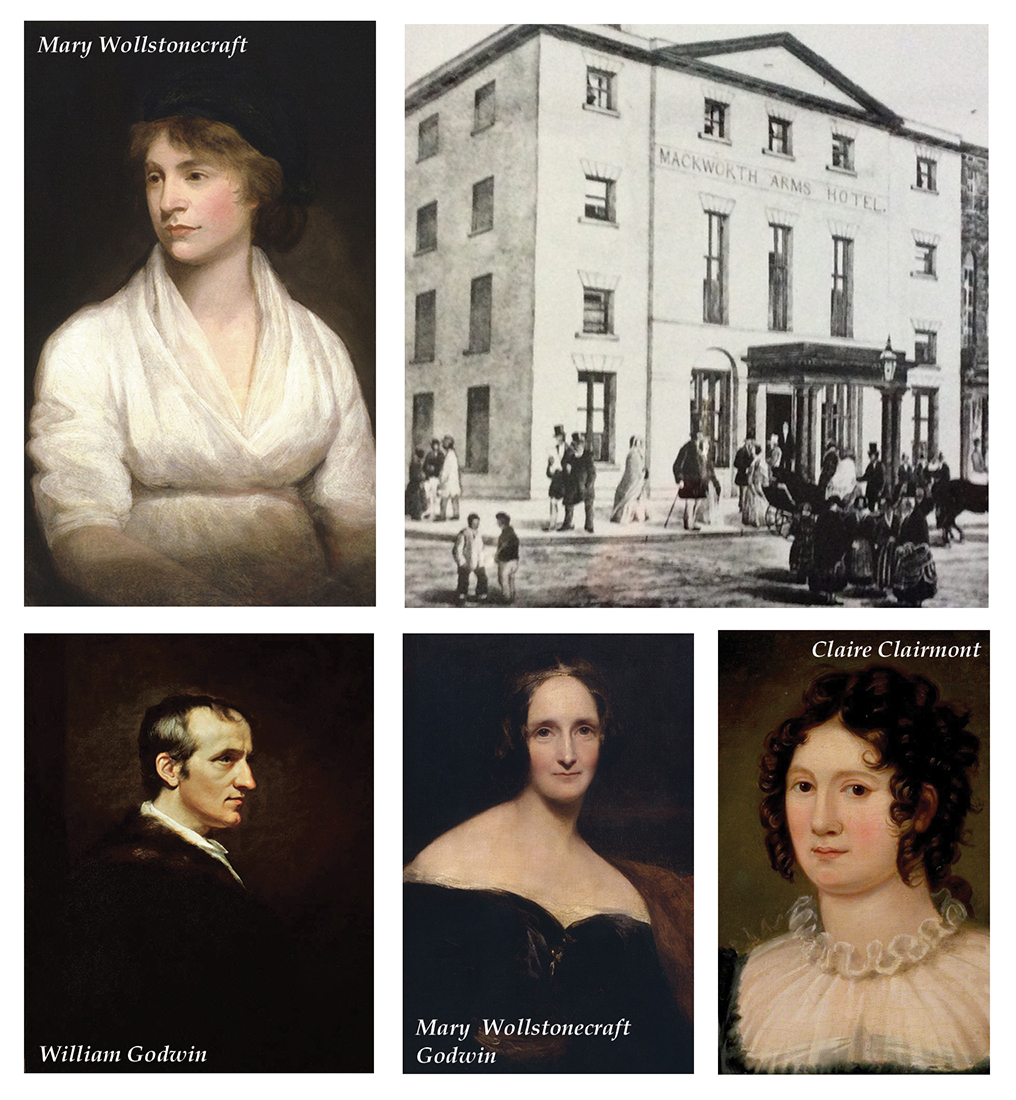 October 9th 2016 marked the 200th anniversary of the death of Fanny Imlay, in 1816, at The Mackworth Arms, Wind Street. (pictured far right)

Gilbert, a diplomatic representative of the United States to France, had a brief relationship with Mary, at the time of the French Revolution. Gilbert and Mary took shelter at the American Embassy and, even though they were-n’t actually married she acted as if his wife.

It was at Le Havre, Normandy, on14th May 1794, that their daughter Fanny was born. Shortly after the birth, the ’family’ went to Paris; Gilbert soon made off to London, leaving Mary and Fanny behind. By the time they followed him to London, in April 1795, they discovered that Gilbert was living with an actress and had no interest in his child. Mary tried to commit suicide, by taking laudanum.

Life for Mary was hard during this period; she returned to her literary scene, and through a variety of people she met William Godwin. William was an English journalist, political philosopher and novelist. In March1797 Mary married William and their daughter Mary Wollstonecraft Godwin was born on 30th August. Mary senior died of septicaemia on 10th September and William was left to raise the two young girls, Fanny and Mary. He married his neighbour, Mary Jane Clairmont, during 1801 and went on to have a further daughter Claire Clairmont. Fanny at this time was 7 and she lived with Mary her stepmother. So many Marys!

After the death of Fanny’s mother, William tried to locate her natural father but to no avail. Fanny was brought up by her two aunts, Eliza Bishop and Everina Wollstonecraft. By the age of 13, Fanny who was living at Somers Town, London moved to 41 Skinner Street, near Clerken-well, the bookselling district of the capital. 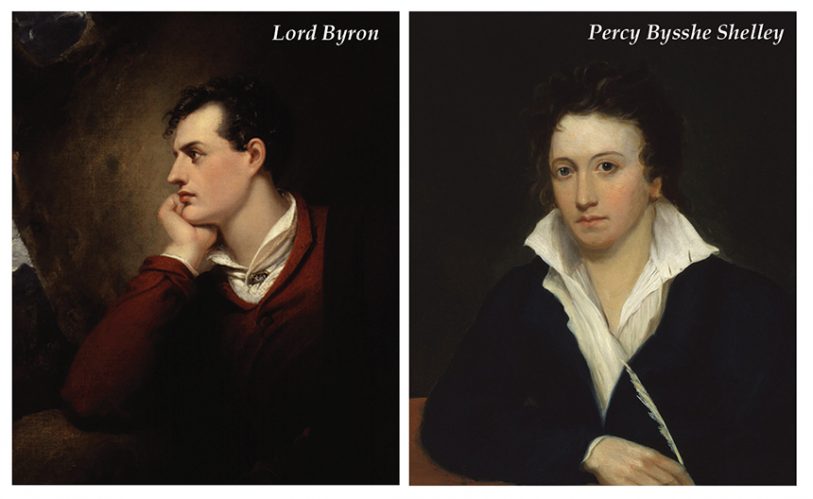 Aged 18, Fanny, was asked by Percy Bysshe Shelley, the Romantic poet, to come and live and be his wife. Shelley had an impact on the two sisters, Fanny and Mary. In turn their mother, Mary was one of Percy’s heroes. Fanny hadn’t met Percy and she turned down his proposal. When they did all meet, both girls were enamoured of him. Both Fanny and Percy were interested in radical politics.

Things during 1814, didn’t run so smoothly, Fanny and Percy were falling in love, but during May of that year, Fanny was sent to Wales by William Godwin who wanted to separate the two of them. Life was tough in the Godwin household as William sank further in dept. Mary Godwin’s relationship with her stepmother, Mary was hostile and the younger Mary sought console in Percy. The two started a passionate love affair, meeting secretly at her mother’s grave at St. Pancras Churchyard. William, exploded in a rage when Percy told him that the two were in love. 28th June 1814, the three of them, Percy Shelley, Mary Godwin and Claire Clairmont ran off to Europe. Fanny was brought back from Wales.

When the trio came back from Europe, in September 1814, they took a house in London, enraging William even further. Fanny was in a difficult position as she felt loyal to both her sisters and her father. Mary and Percy had a baby girl, born prematurely during February 1815. Fanny was sent for, as the baby was fatally ill – William chastised Fanny for disobeying his orders in contacting Mary and Percy. After the death of the child, Fanny paid more visits to the grieving parents.

Mary and Percy had a second child on 24th January 1816, a son called William after her father. Father, William was still in debt and demanded money from Percy – at this time, Claire, Mary and Percy all left for the Continent frustrated by the tension in the Godwin’s household. Before they left, the two sisters had a major argument and never had a chance to reconcile.

Around this time Fanny met, Robert Owen, a utopian socialist and founder of the CO-OP movement. The trio returned from the continent to settle in Bath, to spare Claire’s reputation and hide the fact that she was pregnant by Lord Byron. During September 1816, Fanny saw Percy twice.

In October, Fanny left the Godwin’s London household, stopping at Bristol to post two letters, one to her father, William and the other to her sister, Mary in Bath. She arrived on the evening of 9th October, at the Mackworth Arms Hotel, in Wind Street, Swansea. On arrival at the hotel, Fanny took tea and instructed the chambermaid not to disturb her. By the time both parties received their letters the following day, it was too late as Fanny was already dead. Mary and Percy travelled separately from Bristol. Fanny had been discovered after taking a fatal dose of laudanum on the 10th October aged just 22. There was an unaddressed note, where Fanny wrote: –

“I have long determined that the best thing I could do was to put an end to the existence of a being whose birth was unfortunate, and whose life has only been a series of pain to those persons who have hurt their health in endeavouring to promote her welfare. Perhaps to hear of my death will give you pain, but you will soon have the blessing of forgetting that such a creature ever existed”

Only Percy stayed to sort the situation out. The note that was originally signed had the signature torn off and burned, so that Fanny’s body couldn’t be identified. An article in the Cambrian newspaper didn’t refer to Fanny specifically.

At the inquest Fanny was declared “dead”, rather than a suicide. No one claimed the body. Supposedly Fanny was buried in a pauper’s grave at St. John-juxta, High Street. I looked at the St. John-juxta’s burial register located at the West Glamorgan Archives Services, Civil Centre, for Fanny’s burial, but to no avail.

What became of the others? Gilbert Imlay, who had no interest in his daughter, died in November, 1828; William Godwin expected maternal support and consolation from his daughter, Mary. She cared for him until he died in April 1836; Mary Shelley, wrote her famous novel ‘Frankenstein’ (1818), dying on 1st February 1851 from a brain tumour and Percy Shelley, drowned in a sudden storm on the Gulf of Spezia, Italy, July 1822.

Unfortunately there are no recorded pictures of Fanny

Her voice did quiver as we parted,

Yet knew I not that heart was broken

From which it came, and I departed

Heeding not the words then spoken.

This world is all too wide for thee.

I seemed to have solved the little mystery regard-ing the two entries in the register for the unknown sailor buried in Oxwich (see last months issue of TheBAY Exploring Swansea’a Graveyards). I made a phone call to the Commonwealth War Grave Commission, in Kent and it would seem that there was just the one burial. The curate must have been having some high jinks and entered the burial twice in the register.

READER LETTER RECEIVED I received an email from Mrs Patricia Prismick, who wrote:

“I read with interest your article [Exploring Swansea’s Graveyards (October 2016)] and am wondering if you photographed the new headstone that was erected in 2014 at the grave of James Owen who was a veteran of the Battle of Rorke’s Drift (1879) and who served under the alias David Lewis”. I am pleased to say, that I have a photograph of the said headstone which I took when the headstone was erected in 2014, by South Wales Monuments Ltd., Caerphilly. James Owen died in 1938.

Mr Brian Hawes, told me a story he remembered from the valleys during the war. In the village of Pontrhydyfen, the home of Ivor Emmanuel, a stray bomber flew and dropped a bomb and most of the Emmanuel family were killed. Coincidentally, Ivor Emmanuel became a television singer and actor and he is famously remembered for portraying “Private Owen”, in the 1964 film, Zulu (pictured above right).

It’s amazing the little stories people remember – keep sending them in to me as hearing about them shows that there is a bigger picture to be discovered.