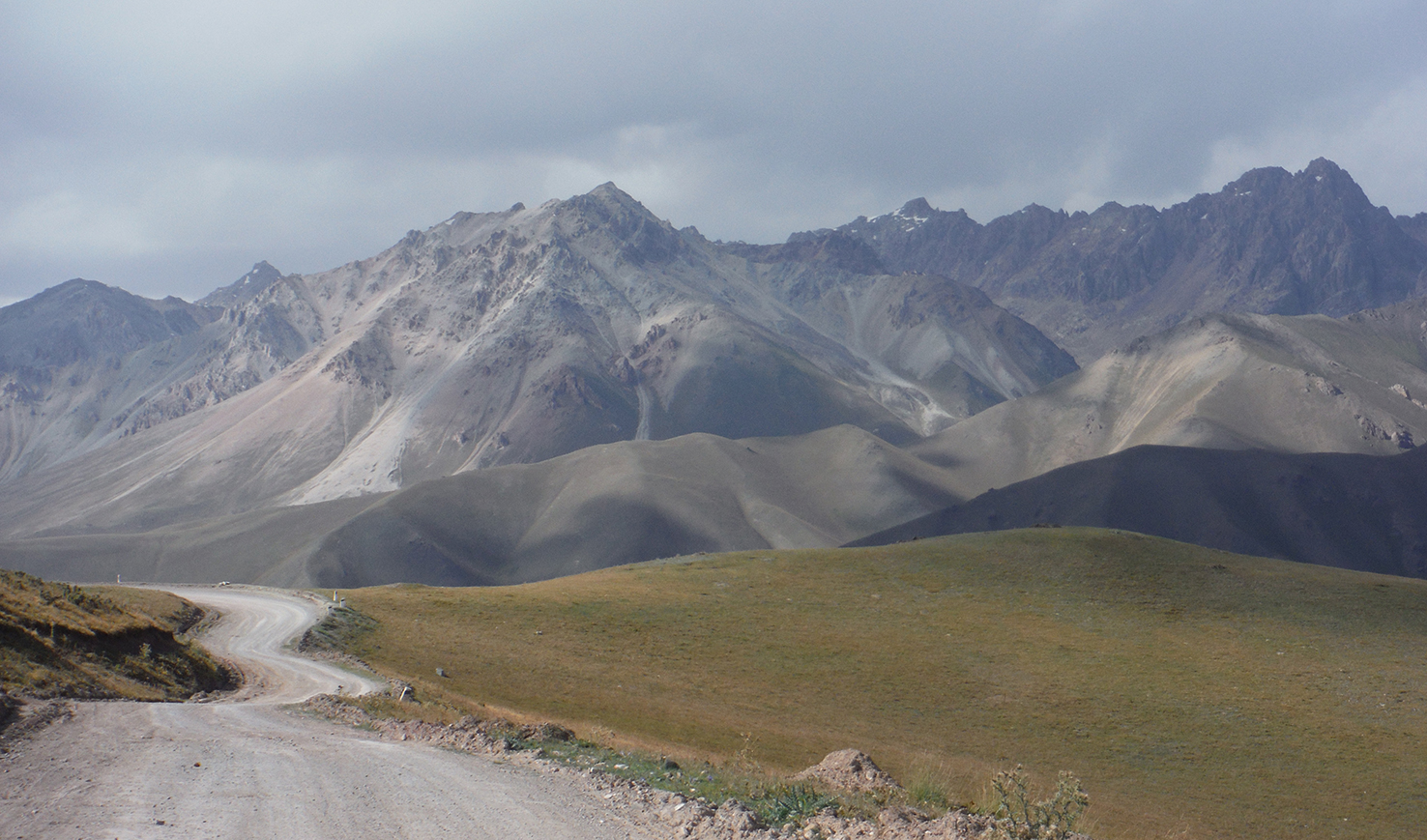 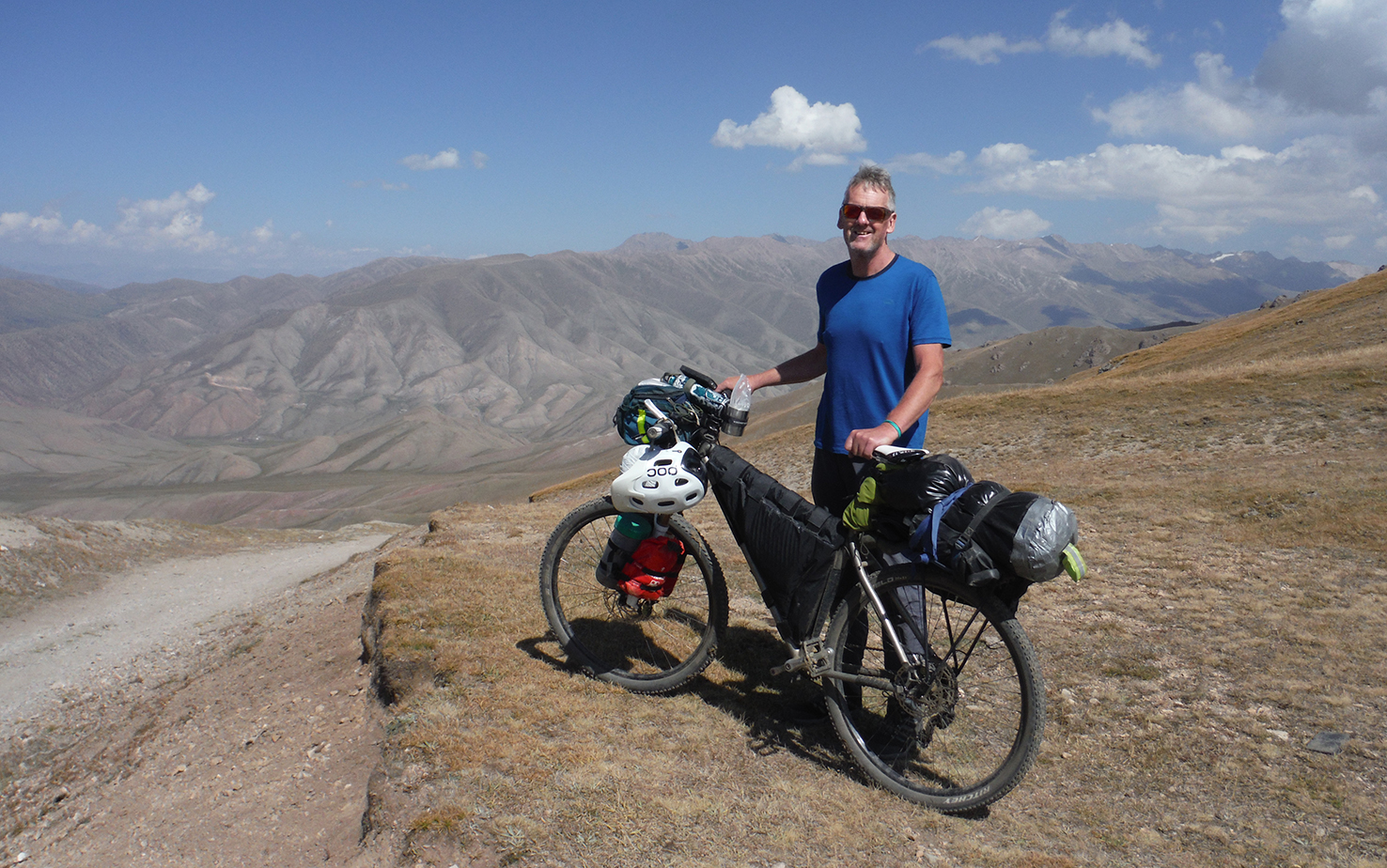 THE INTREPID KIM JONES CERTAINLY LIKES TO PUSH HIMSELF TO THE LIMIT. LAST MONTH HE TOOK HIS BIKE TO KYRGYZSTAN AND DISCOVERED A COUNTRY THAT EXCEEDED HIS EXPECTATIONS. WHILST THERE KIM MET UP WITH SOME FELLOW CYCLISTS

Slowly, ever so slowly we climb, forever upwards, inching our way towards the top of the pass, our legs barely turning the cranks. Kyrgyzstan is a mountainous country, 90% of it lies above 1500m and with an average elevation of some 2700m it’s not for the faint hearted. I’ve never before ridden a loaded bike at these altitudes and I must admit I was struggling. For what seemed like the umpteenth time in the last hour, I laid the bike down, took several large gulps of water and grabbed a handful of beef jerky, my head thumping and my legs like, the light, starting to fade. 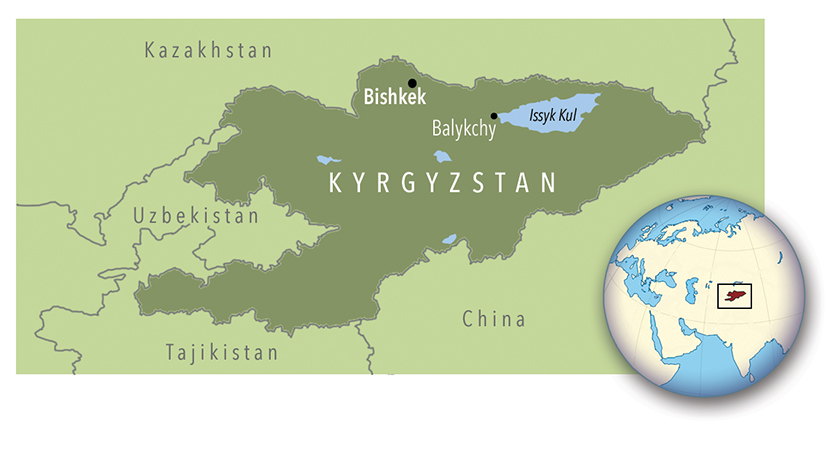 Looking back down the vast steep sided valley which we’d spent most of the afternoon riding up, I smiled to myself, happy with the thought that the climbing was nearly over. Back on the bike and with one last effort we reached the top of the climb and there laid out before us was a view that literally stopped us in our tracks. The sun, ending its daily journey across the sky was casting iridescent colours on the surface of the lake; the distant yurts belonging to the nomads seemed like white hot coals littering the Jailoo (green pasture land) which appeared to be on fire.

The following morning as I was sitting outside the yurt, watching and wondering, an eagle flew low above me manifesting the sense of freedom I crave. Could I? would I? It was a question I asked myself many times during my short stay in this wonderful country.

Kyrgyzstan in 1991, was the first of the Russian ‘stans’ to gain independence and since that time there have been over 20 Prime Ministers – it struggles to come to terms with its apparent freedom. In the capital Bishkek, unemployment is high and alcoholism rife, gone are the days of communist labour which offered guaranteed wages together with housing and heating; jobs are now scarce and money is tight. 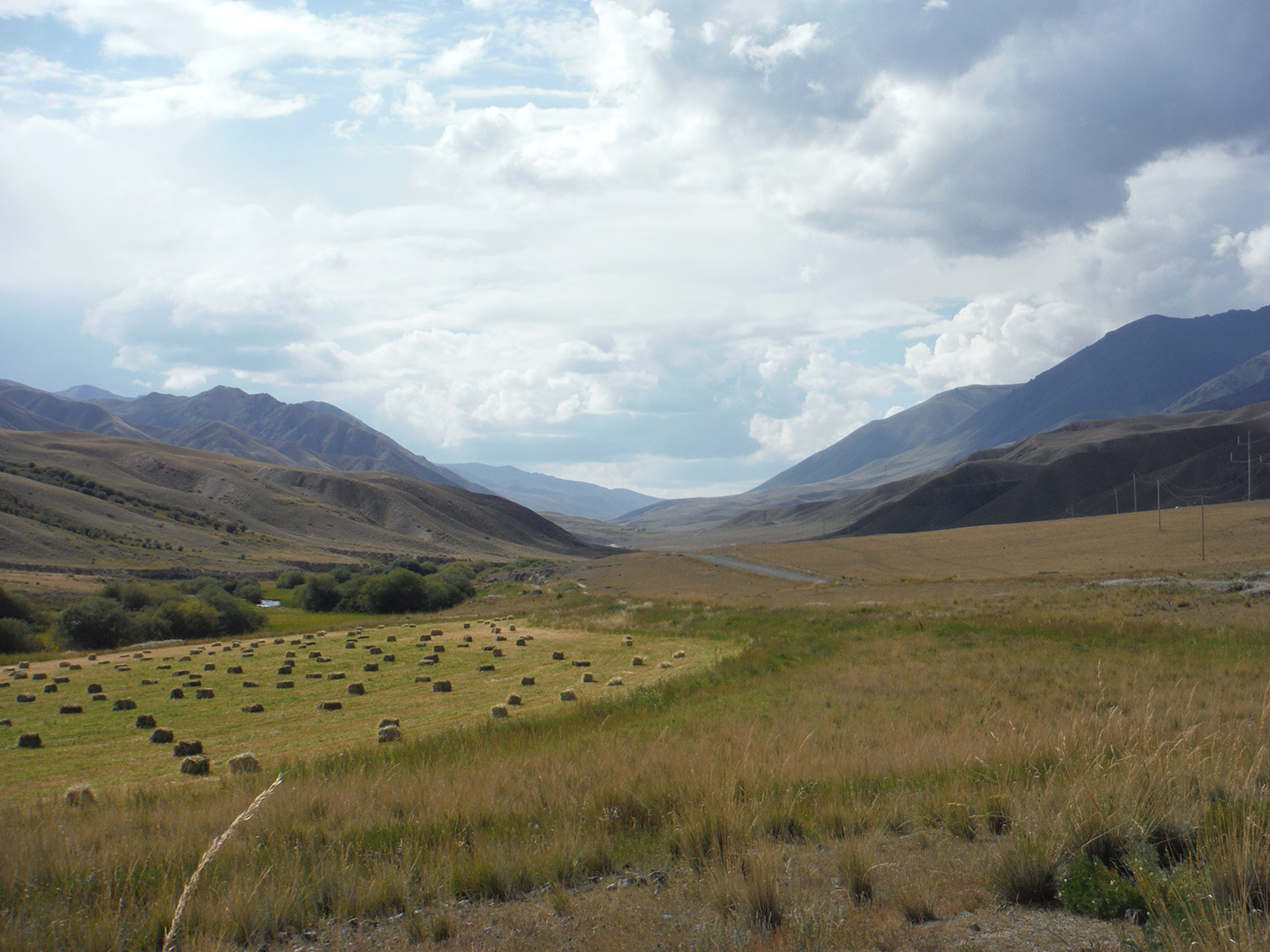 A lot of the younger people have migrated to Russia, leaving an older generation struggling to survive on their meagre pensions. The country is heavily reliant on foreign investment, predominantly from China, Russia and Turkey; the benefits of which are apparent, in particular the Chinese investment in infrastructure and the Turkish in education. But the Russian money isn’t as tangible and one senses a presence that feels almost sinister. I had an interesting encounter with a Russian Special Forces soldier and his dark suited colleague who seemed particularly keen to know where I’d been and what my plans were. It was a conversation that left me both uncomfortable and curious.

The cost of living here seems ridiculous by western standards, a meal in one of the rather good buffet restaurants costs less than £2 and fuel is only 35 pence a litre. Vodka at just over a £1 for half a litre, lends some truth to the joke that it’s used as a sub-stitute for anti-freeze here in the freezing winters. Yet in a country where corruption is rife, where driv-ing licences can be exchanged for dollars, speeding fines can be negotiated and settled at the roadside, vehicles ooze acrid black smoke because the catalytic converters have been removed and sold; the people are the most kind, helpful and unquestioningly generous I have ever met.

A week or so into the trip, having survived on cold porridge and couscous for two days – my stove had developed satanic tendencies and decided to self-combust – we arrived in a small village hoping to find a guesthouse. Of course being where we were this was a ridiculous assumption, and, after a fruitless search cycling up and then back down the only street, we saw a lady in her garden. I got off my bike and walked towards her, gesturing with my hands that we were looking for somewhere to stay. To my complete surprise, she invited us in and with no com-mon language we shared a meal with the family who then let us stay in one of their rooms for the night and in the morning gave us breakfast. As we were packing the bikes, I offered her some money, but this was refus-ed as the lady indicated we were now friends. Such generosity is incredibly humbl-ing and once again leads me to question the way we lead our materialistic lives here in the west. I can just imagine how people I know would react if an unshaven Kyrgyz cyclist covered in dust, turned up at their door looking for a bed for the night. 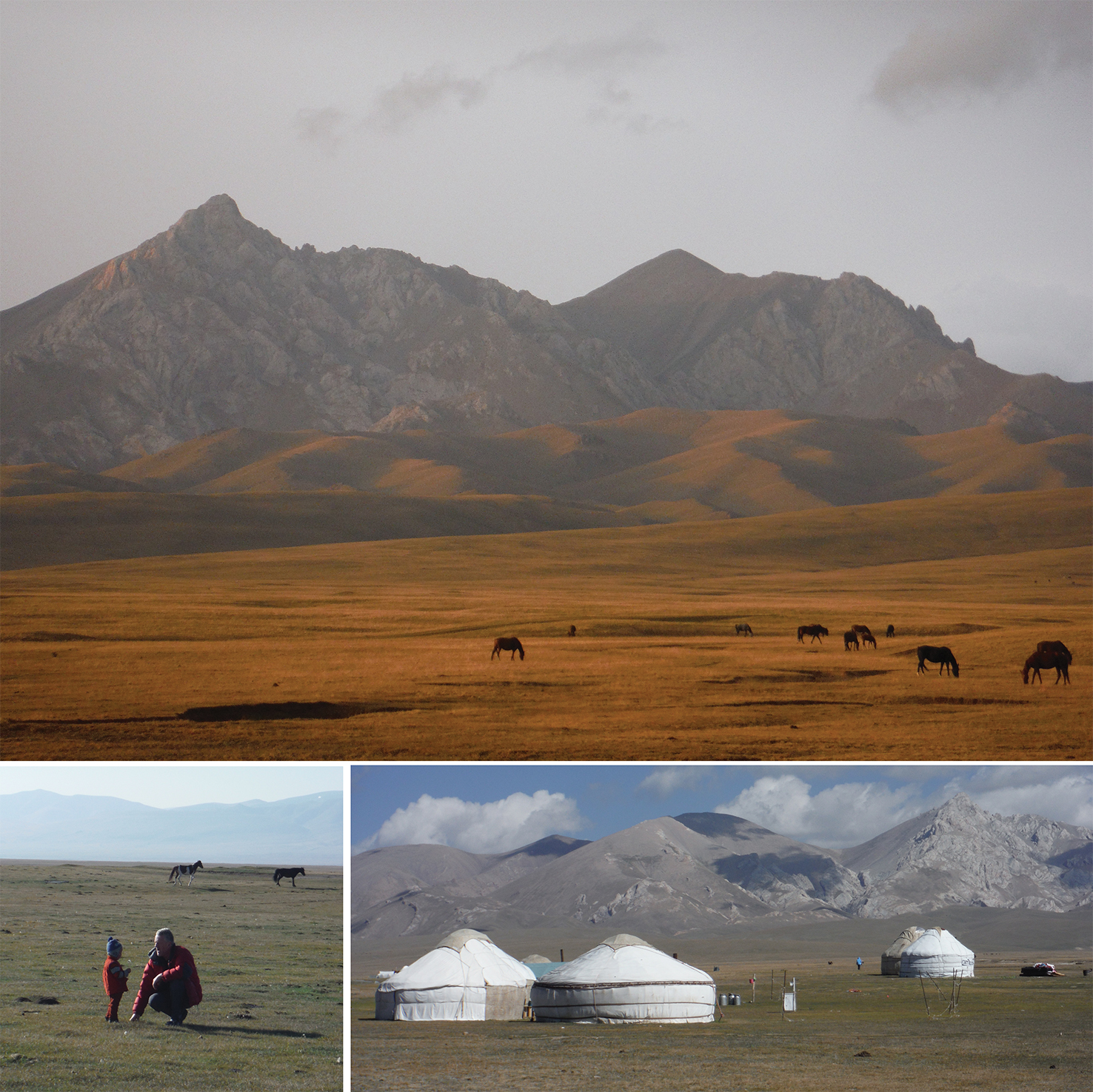 Outside the capital, life is different. Historically, the Kyrgyz people were nomadic, but despite the various attempts over the centuries to tame their spirit, and settle the people, the nomadic blood is still in their genes. Every summer they live what seems a hard but idyllic life with their animals on the Jailoo. We were lucky enough to spend a couple of days staying with a family whilst their animals feasted on the abundant grazing that the Jailoo offers. The horses, sheep and goats are brought here for the summer, then, come mid-September, they are driven back down to lower pastures where they spend the winter.

One morning in particular will stay with me. I spent several hours picking dandelions and blowing their seeds away with a child called Fatima, who was the daughter of one of the nomad women. If the wind took the seeds first, she would tear off the head in comic frustration and throw it into the air, keeping the stalk in her free hand which she then presented as a gift to her mum. The day of our departure Fatima was riding a donkey with her older brother, her body warmer perched on the donkey’s head, its ears sticking through the arm holes. They waved us goodbye, their faces beaming. It is an image that still brings a smile to my face.

Here again, as in the Sahara, the nomadic people seem to have an affinity with the cycle tourer and we were always made to feel welcome. Whether this is because you’re seen as vulnerable or perhaps it’s simply the fact that you have all you need for a life of travels with you on your bike. Riding a bike loaded with all your kit gives you that sense that everything is going to be okay, all is well with the world, bizarrely the same feeling I get when I put on my duvet jacket. The camaraderie that exists amongst the travelling-cycling community is something to cherish as stories are exchanged, possible routes discussed and days in the saddle are shared if your destination is common.

On one occasion we were sitting in a café with a few other solo travellers when an organised group with their guide came in – it was interesting to observe the different dynamics that played out within the organised group and their shared experiences, compared to the conversations that had been exchanged amongst ourselves. Talking with other travellers, both young and old, I realise how culturally insular we are here in the UK; this island nation of ours still has so much to learn. 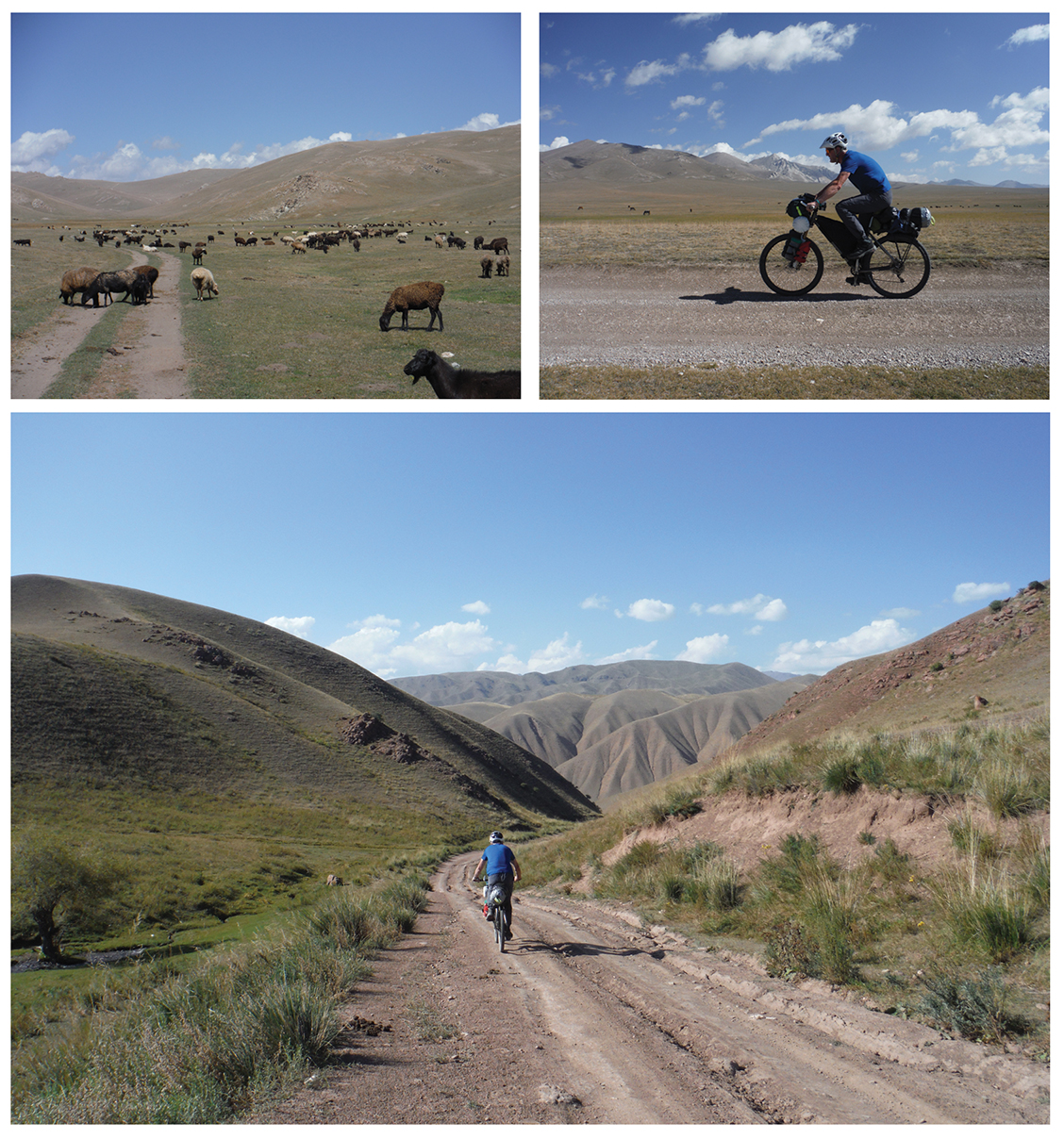 As you travel along the dirt roads occasionally passing through small villages, you can’t help but be struck by the topography and the sheer variety of landscape that this country is blessed with. Cycling along the valley floors, sometimes dwarfed by the massive snow- capped crags and cliffs that towered above me; other times surrounded by a brown arid almost desert-like landscape with little or no sign of life, I felt so insignificant, a tiny moving speck in a true wilderness.

The best days were spent amongst the endless roll-ing green hills, on these days I felt strong and could ride all day. It feels as if my soul belongs in these hills and the sun, my spirit rises high, allowing me to roam free. The worst days were the long sections on the washboard tracks and having to change into an easier gear whilst pedalling downhill because the headwind was so strong. I remember one day towards the end of the trip, things had been going particularly well so we thought we’d push on into the next valley to camp; it was then we hit what turned out to be an awful section of track. For km after km it felt as though we were cycling across someone’s rib cage and after an hour of this I stopped by a small stream to rest. The muscles in my back wouldn’t stop twitching and my hands felt as if I’d been holding a jack hammer. I sat on the bank to soak my feet. 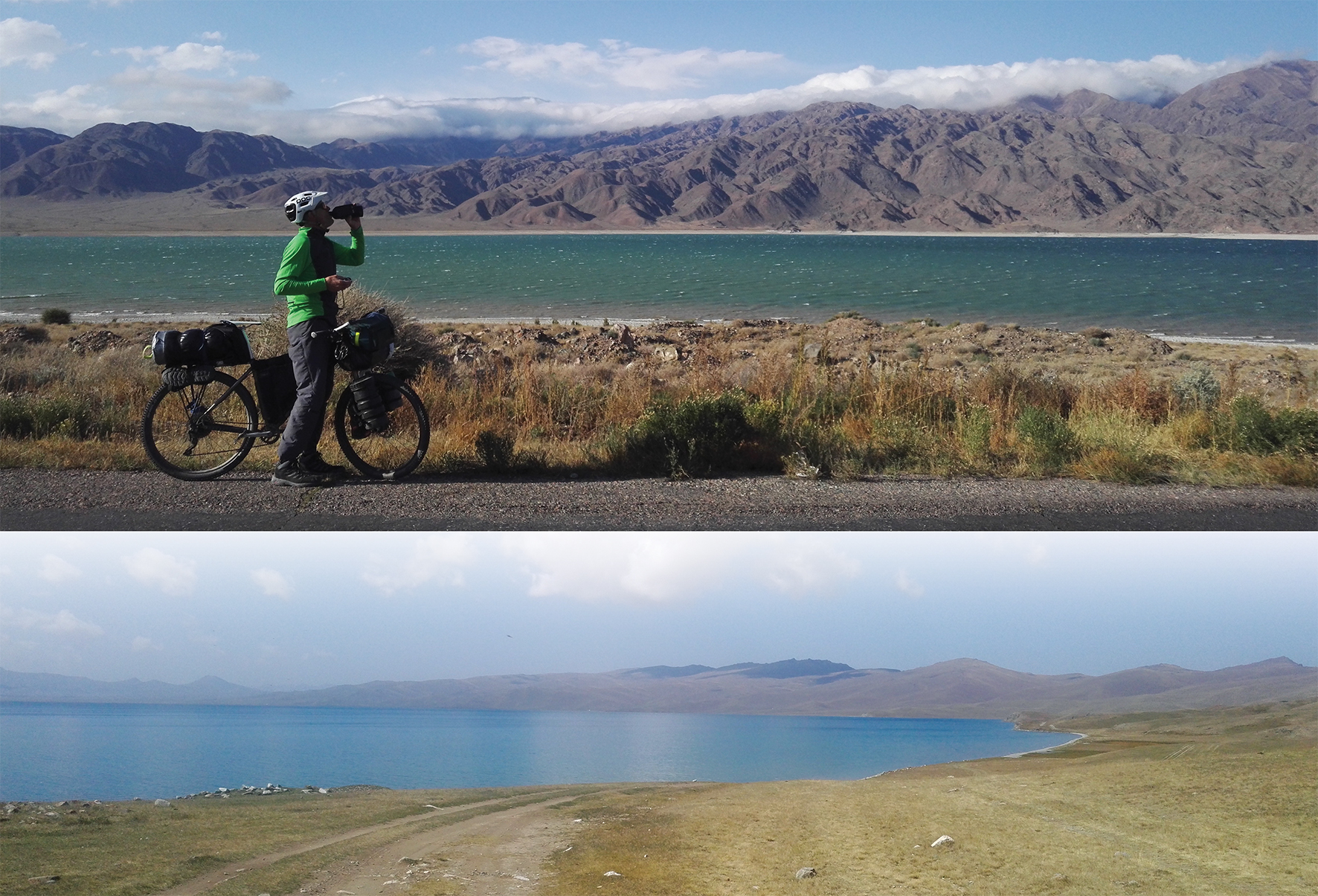 I stood up slowly and walked back to my bike, No! My sandals, where were my sandals? Gone! Just a loop of paracord left on my rack where they had been. It’s difficult to describe how I felt at that moment, anger, despair, sadness, laughter, all of those emotions and possibly more. It was too late to go back and look, as we needed to find somewhere to camp – so they were destined for a night under the stars. Once in the tent and with a full stomach I realised that during this trip I’d become somewhat pragmatic and had realised the futility of letting mishaps get to me, it’s almost inevitable that things will go wrong, you just need to adapt, but still, losing my sandals was careless! As it turned out we didn’t have to backtrack far to find them and after a break-fast of kumis (fermented mares milk) and biscuits we were once again on our way. The last day of our travels we spent a lazy afternoon and morning in Balykchy by the lake Issyk-Kul, resting our bodies in the heat of the sun and swimming in the cold clear waters of the lake, before heading back to Bishkek and a flight home.

Unfortunately because of current world tensions there seems to be a popular misconception about certain countries, particularly if they end in ‘an’. People have asked if I felt safe, was it dangerous? Whilst these questions are understandable they are based on people’s preconceived ideas of a place they have never visited and on what is fed to us by the media; but they are so misplaced. Whilst this sort of travel isn’t for everyone, for those who go and take the time to immerse themselves in the lifestyle and absorb the culture, the rewards will be life long, and the memories and experiences will stay with you forever. Tourism here is still in its infancy and at present there is little evidence of any of the western trappings, so if it’s your thing, go now before it be-comes the next ‘cool’ place to visit and is forever changed.

Thanks again to Sam & Lucas at URBAN CYCLERY