This month Charles looks at the history of the theatre in Swansea.

If you have a question regarding YOUR family history that you would like to put to Charles, he can be contacted at swanseafamilyhistory@yahoo.co.uk – he’d be delighted to hear from you.

“All the world’s a stage” so begins a monologue by Jaques in Act II Scene VII from William Shakespeare’s As You Like It. I’m not sure how true this statement is, but one thing for sure is that we can learn a lot of social history from our theatres.

Christmas 2016, the Swansea Grand Theatre is hosting a production of the pantomime Sleeping Beauty, starring Lance Corporal Richard Jones, a serving soldier who has sprung to fame as a magician in the reality television programme Britain’s Got Talent.

I am going to go back to the early days of the Grand Theatre, and just like a theatrical production, this social history, will be in two acts.

This month – ACT 1 There was a theatre in Swansea, dating back to 1807, this was The Theatre Royal. Located at the corner of Bank Street, later renamed Temple Street it was opposite the first Police Station in Swansea, and opened on July 6th. The very first pantomime to be performed in Swansea, dates back to1809, and was Mother Goose. 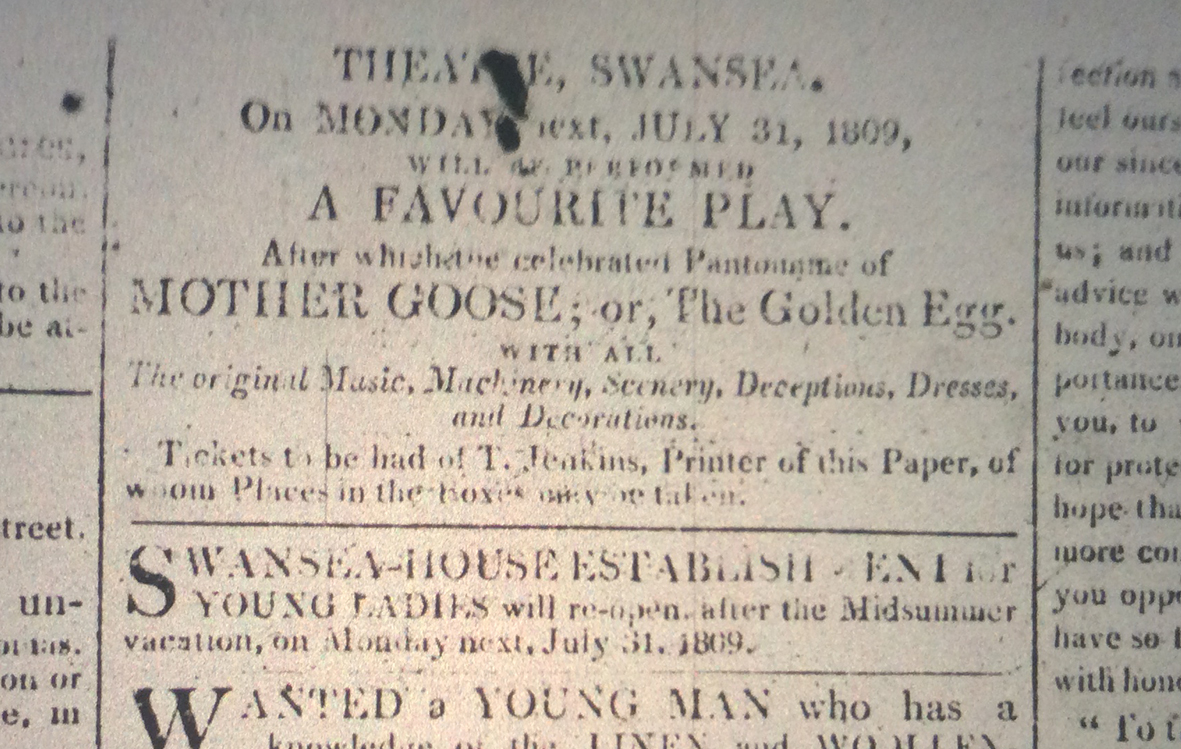 “The celebrated Pantomime of Mother Goose was produced at our Theatre on Monday last, with all its tricks, deception, and machinery, all of which were executed in a masterly manner, and met with their deserved need of admiration and applause. The dresses of all the leading characters were entirely new, and presented a curious variety of whimsical costume. A general emulation seemed to pervade the actors, whim, collectively and individually, used their best exertions for the entertainment of the public”, 29th July 1809. If anyone wanted to go to the show, they had to obtain their tickets from T. Jenkins, the printers of The Cambrian.

Unlike today a theatre would only be opened for short seasons, often to coincide with the town events at the time. These events hopefully would draw in large crowds, people that needed entertaining. Often the theatre would remain closed for many months of the year. Some famous performers/actors to tread the boards were Shakespearean actor Edmund Kean and poet and dramatist, Sheridan Knowles who were unknown at the time. They came to Swansea, and went on to seek their fame elsewhere. It seems to be the Swansea way!

Numerous managers tried to make a success of The Theatre Royal, but they all seemed to fail, and by 1864, it was shabby and in need of renovations. These were carried out during 1867, with a new summer season commencing in June and a winter season in October. The final curtain came down in 1898, when it wasn’t attracting touring companies, and was only being used occasionally. The Theatre Royal the oldest in Wales, was finally pulled down during 1899, to make way for David Evans the department store. The German Luftwaffe put an end to trading here in February 1941.

During 1892, at the Mackworth Arms Hotel, in Wind Street, an auction, held by Mr W. J. Rees, produced a catalogue with the catchy title: – ‘Particulars, Plans, and Conditions of Sale of very valuable and important freehold properties, situate in the thriving town of Swansea. comprising: – Ground Rents secured by The Drill Hall, The Public Houses……’ The catalogue provides a colour map of Singleton Street with the location of the Drill Hall and the description of Lot 19. The ground rent of £10 per annum would be worth £888 today and the rent per annum of £100, £8,883.

Five years later in 1897, the Drill Hall was gone – It was purchased from Colonel Pike by Frederick Mouillot and H. H. Morell, who were two entrepreneur actor managers. The building was demolished, and a Renaissance style theatre was built by the very experienced architect William Hope.

What did William Hope build?

The auditorium comprised of three tiers, allowing 2,500 people to be in attendance. The Dress Circle, was fitted with 300 comfortable red plush upholstery tip-up chairs, each one provided the viewer a good view of the stage. Meanwhile downstairs in the Pit, the seating was comfortable. There were ample exits, allowing the theatre to be cleared within 2 minutes, with the main entrance being located at Singleton Street.

The opening ceremony on July 26th 1897, was performed by opera singer Madam Adelina Patti who lived at Craig-y-Nos. Madam Patti, christ-ened the memorial stone, with an orthodox bottle of wine, saying ‘I name this building the Grand Theatre’. The local populous were in attendance. If any reader had relatives who remembered this exciting day, and has any family tales, it would be wonderful to hear from you. 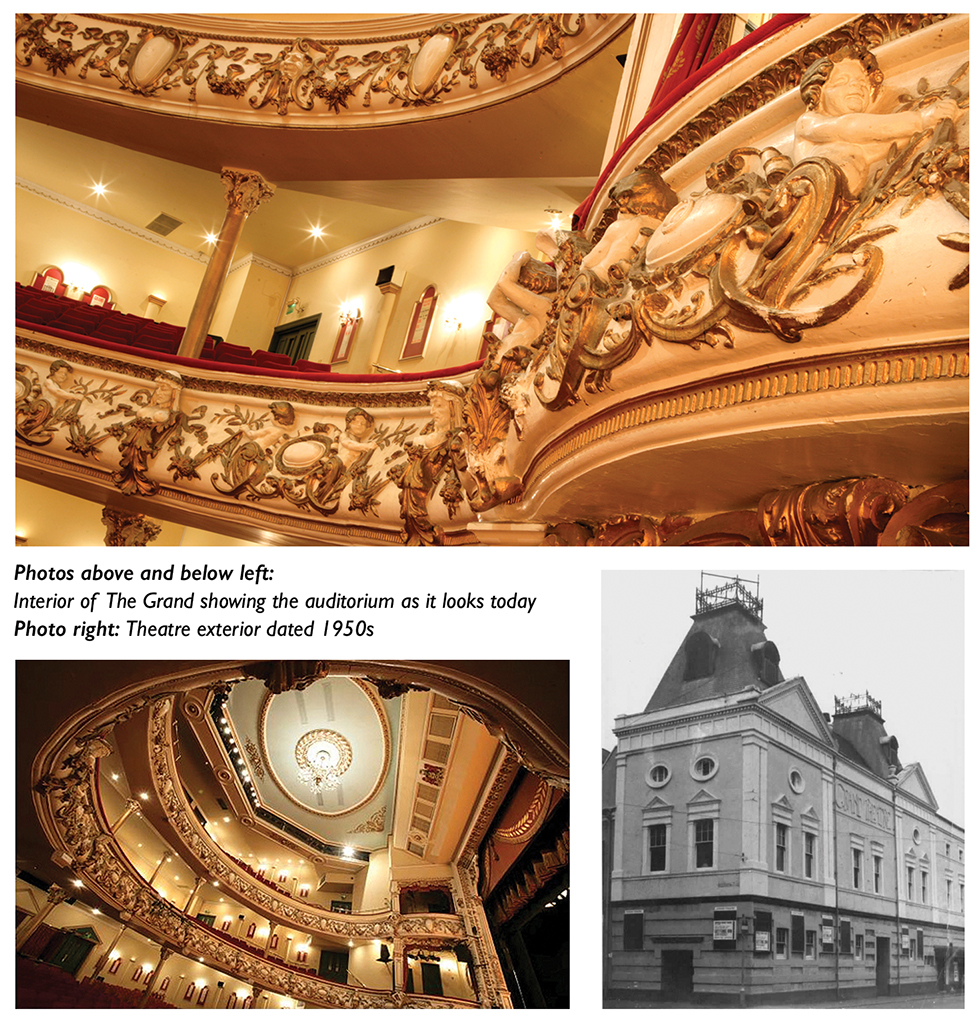 Early actors/performers at the Grand Theatre, included household names of the time, married couple Fred Terry and Julia Neilson, in their production of ‘The Scarlet Pimpernel’, French actress Sarah Bernhardt, the highly acclaimed Frank Benson, with his Shakespearean Comp-any, and another married couple, Oscar Ashe and Lily Brayton. It was during 1924, that ‘our own’ Welsh composer and actor, Ivor Novello made an appearance, in ‘The Rat’. During the latter part of the twenties, performances included ‘Rose Marie’ and the ‘The Sacred Flame’, starring the English actress Gladys Cooper.

What information is available for those who are interested? West Glamorgan Archive Service, have a collection of early programmes and memorabilia. The Grand Theatre itself has copies of programmes on display.