I was recently asked what nationality Fulke Andel our gardening columnist was – Norwegian? Swedish? I was rather taken aback as I had assumed that readers would have got the joke. Fulke Andel is a pseudonym of a local gardener who would prefer to remain anonymous. Fulke Andel/Fork Handle! – Ed 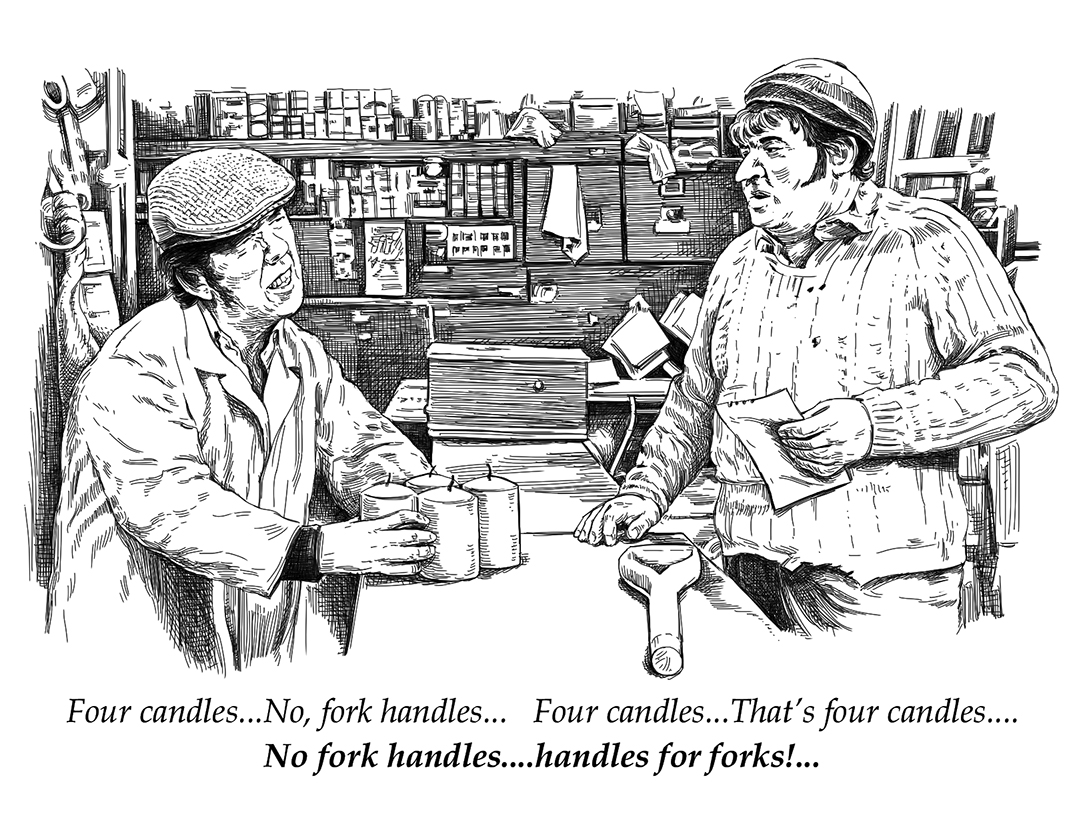 Well, just as per last year, October has provided us with a nice dry spell, which allowed me to get ahead of myself with the autumnal chores. Borders have been tidied and I’ve made a start on digging the veg garden.

However, many gardeners see these cold months as a time to hang up their wellies and hibernate until the spring. Yes there’s far less to do in the garden, but there’s also far less daylight or good weather, in which to do it! I see the next few months as a good time to plan ahead and decide on what

I’d like to do differently with the garden or what new plants I want to experiment with. I use the brief periods of good weather we get to tidy up the garden in general, but especially the flower borders. They’re also used to roughly dig over the vegetable garden. It’s a good time to extend your vegetable plot or start a new one from scratch. The best approach to digging, in my opinion, is to just do a small amount when the weather allows. That way, you don’t end up overdoing it – and your back will thank you! 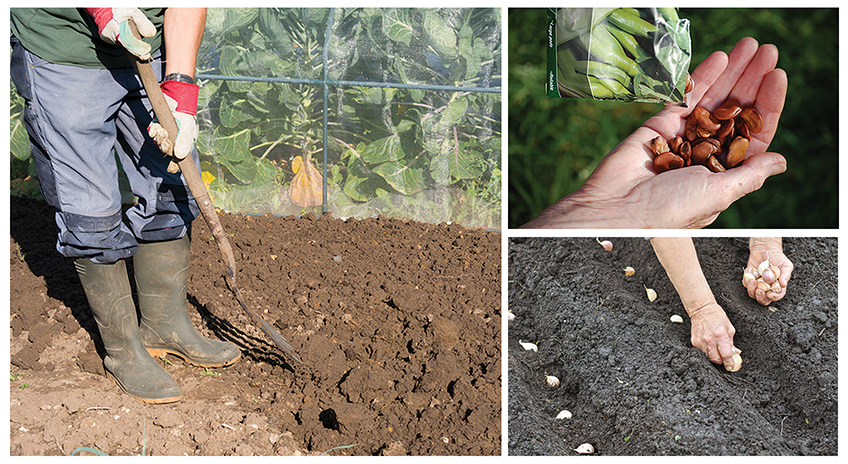 November is really the last month that you can plant or sow. Traditionally, it’s the last opportunity you’ll have to sow broad beans and plant out garlic bulbs. Personally I’ve had very little success with autumn sown broad beans – losing at least 50% to frost. I find it better to sow in February under a cloche, the beans will be ready only a week or so behind the winter sown beans – but the crop is far heavier as you have more plants. Garlic, however, seems to survive winter sowing very well. They will be slow to show signs of growth but seem to survive (if not flourish) when they’re hit with severe frosts.

Soggy, brown, collapsed plants are an eyesore and deserve nothing better than to be cut back and given a decent burial on the compost heap. Cut down herbaceous stems and clear the tatty remains of annuals, but do leave a little cover of the perennials that fade relatively elegantly (sedum, astilbes and grasses for example). They will provide winter interest as well as some much needed wildlife shelter – ladybirds especially appreciate winter quarters and will repay your hospitality by disposing of aphids in industrial quantities next year. Leaving sodden debris and fallen leaves around plants will only encourage pests and disease.

If you own a greenhouse, now’s a good time to wash pots and trays, clean, mend and oil your tools and throw away anything that is beyond hope or reasonable repair! Cleaning your greenhouse thoroughly will prevent pests from hibernating and leaping into action next spring. Wash the windows inside and out to allow maximum light in over the winter and scrub benches, fixtures and glazing bars with disinfectant, making sure you hose the whole place down really well, especially dark and dusty corners.

For really effective pest elimination in your greenhouse, fumigation is the ticket. Move all plants out-side, shut the windows, and light a sulphur candle in the middle of the floor, (retreat at speed!), shut the door and wait until the smoke and fumes have completely dispersed several hours later. Your greenhouse should now be delightfully pest free!

With Christmas just around the corner, now is the perfect time to prepare for Christmas day itself. I’m not suggesting planting any specific vegetables for consumption on the day, more importantly I’m suggesting it’s time to start hinting about what you, as a gardener, really want for Christmas! Garden Centres are full of all things Christmas, but I some-times wonder how many gifts bought for gardeners are really well thought through. So rather than leave it to chance, and if you suspect your hints are being ignored – tell your nearest and dearest what you’d like!

Something to look forward to in 2017 – I’ve been asked to help some good friends carry out a make over of their small garden. The brief has yet to be agreed, but I suspect it will involve the removal of some mundane shrubs and the inclusion of more interesting fragrant plants and a small vegetable garden. If all goes to plan, I’ll be able to share the steps I take to bring about this transformation, during 2017.

JOBS TO DO IN THE GARDEN FOR THE WINTER MONTHS

Harvest Your leeks should be coming ready now. Harvest every other one in a row leaving the rest to grow on. Brussels sprouts should be starting as well. Pick from the bottom of the plant upwards. Just remember the sprout is for the whole of the winter, not just for Christmas!

Along with sprouts you can harvest kale and take up the winter cab-bages and cauliflowers. A cauliflower tightly wrapped in cling-film kept in the fridge can be kept fresh for as long as six weeks.

Main crop carrots can be lifted to store safe from pests in damp sand or peat in your store along with parsnips but parsnips do hold in the ground better than carrots.

You could still be harvesting celery and celeriac and kohl rabi as well as turnips, swedes and spinach.

Fruit It’s pruning time for apples and pears and they’ll benefit from some compost around the base as a mulch. With younger, staked trees check the stakes are firm and the ties. Winter winds can shake the roots loose on young trees causing poor growth or even death.

As with October, November is a good month to attend to pruning the raspberries, blackberries and hybrid berries as well as being the ideal time to plant bare rooted canes. Don’t forget to add plenty of compost to the soil and 250gr (8oz) per square yard of bonemeal.

General Prune roses lightly to prevent wind-rock, full pruning to be done in the spring

Clear up fallen leaves – especially from lawns, ponds and beds

Raise containers onto pot feet or onto upturned saucers, to prevent water-logging

Plant tulip bulbs for a spring display next year

Cover brassicas with netting if pigeons are a problem

Put out bird food to encourage winter birds into the garden

Have a bonfire – to dispose of excess debris unfit for composting BUT check there aren’t any hedgehogs hibernating in it before you light it. 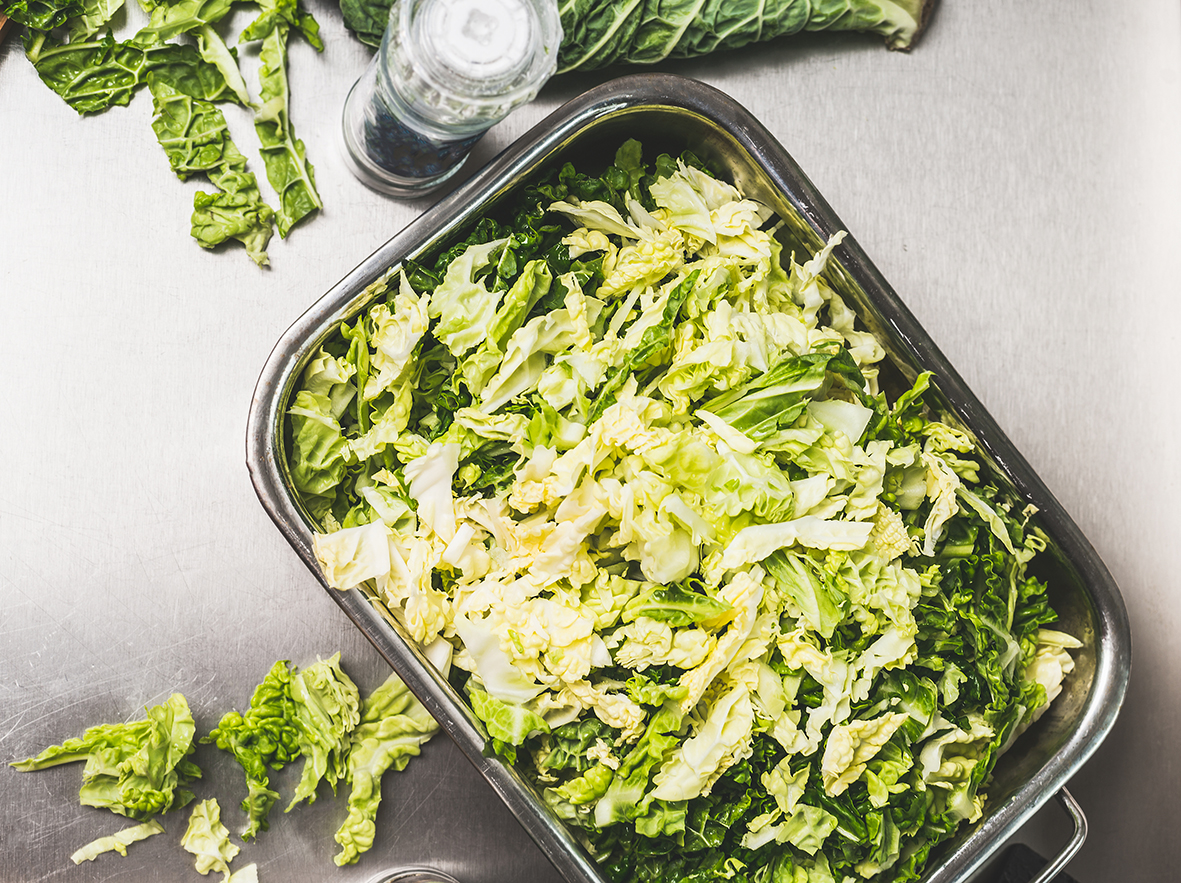 Brassicas are at their best over the coming months, so here’s a recipe for an alternative to plain boiled cabbage. To serve 4, you will need, 1 tbsp of Olive Oil, 150g unsmoked streaky bacon – sliced, 2 leeks – sliced, a large Savoy cabbage – thinly sliced, 100ml vegetable stock.

Heat the oil in a large lidded frying pan. Cook the bacon until golden. Remove and set aside. Add the leeks to the pan and cook until softened. Stir in the cooked bacon, cabbage and stock. Cover and leave for a minute or so to help the cabbage wilt. Remove the lid and cook for a further 6 to 8 minutes, stirring occasionally until the cabbage has softened. Serve immediately.

Readers Tips Many garden machinery retailers have special offers on servicing mowers and strimmers at this time of year, so make the most of them by phoning around to get the best price. GJ Pontarddulais