This month, John Ashley takes us on a walk far from home. John while doing his day job, travels the world, and here he gives his account of his time in the Horn of Africa where he discovers a country of distance runners and gets to feel a little younger. 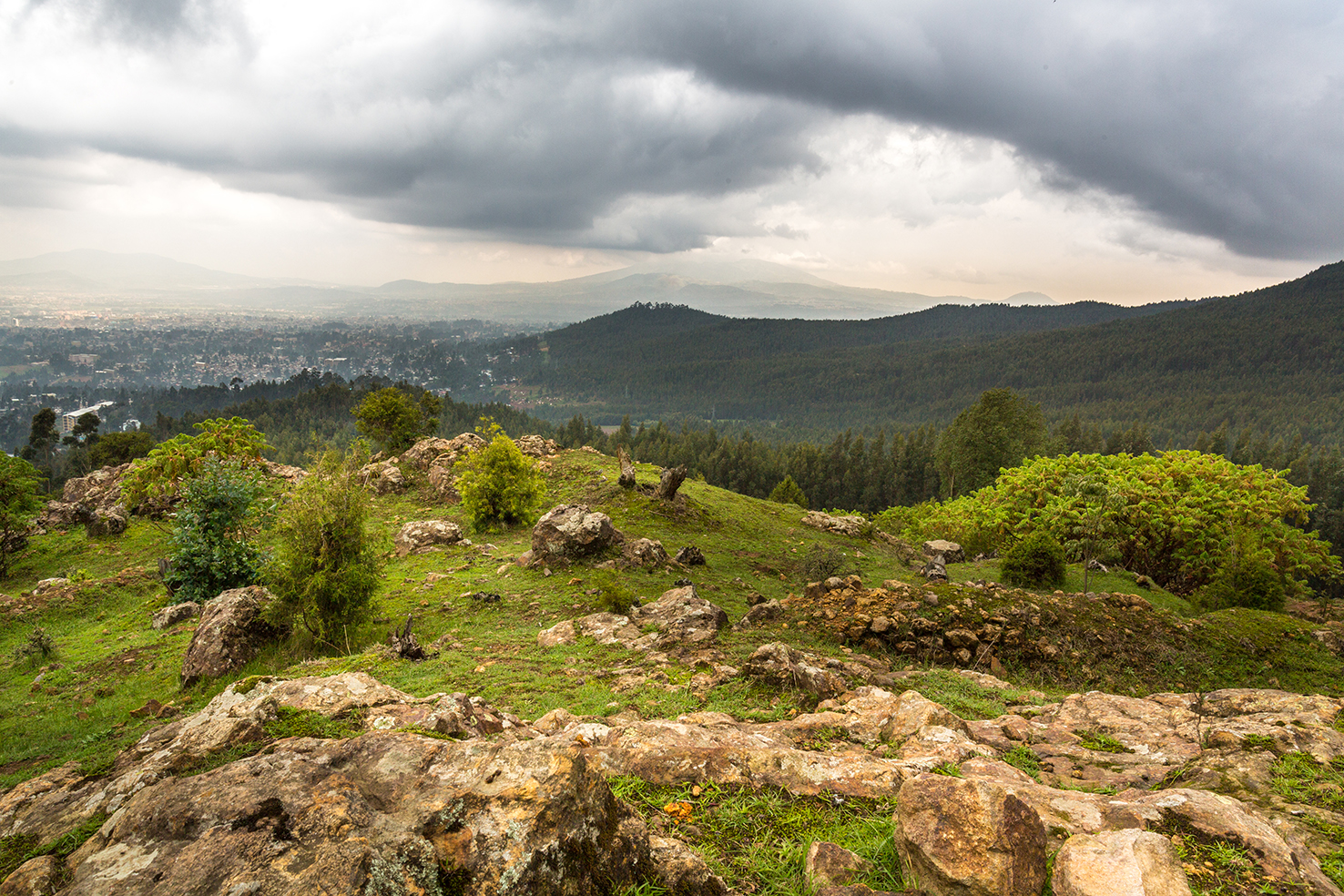 View of the beautiful landscape from the top of Mount Entoto, just outside of the city of Addis Ababa, Ethiopia 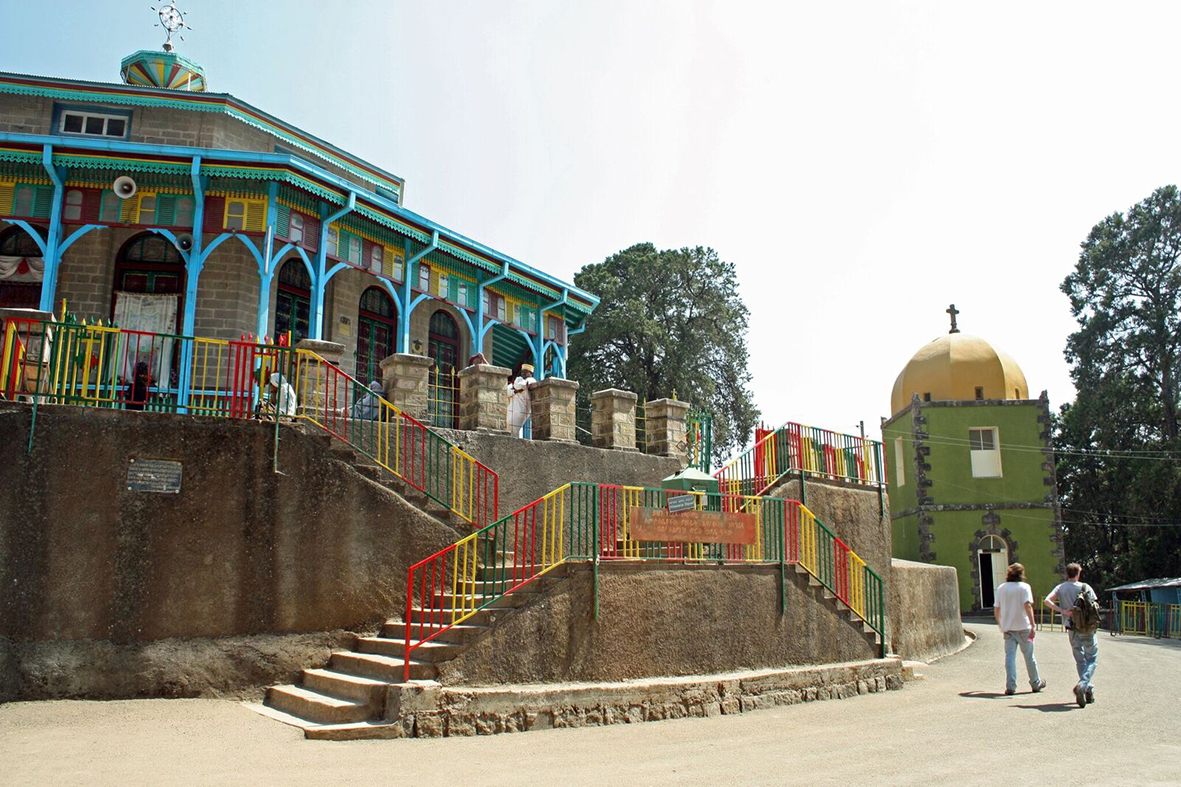 Mount Entoto overlooks Addis Ababa from a height of over 10,000 feet. There are many churches and monasteries, and a small museum (no cameras – a recurring theme). This was my first outing outside Addis, and a reminder of the thin air as I walked around the summit in the heart of the Horn of Africa.

Ethiopia is one of the thirty poorest countries on the planet. It is land-locked, bordered by Eritrea, Djibouti, Somalia, Kenya, South Sudan, and Sudan. Just Djibouti is regarded as truly friendly, and provides the only safe route to the sea. A shooting war is going on with Eritrea. The Foreign and Commonwealth Office strongly advises against travel near any of the borders. The risks are war, insurrection, terrorism, and kidnapping. The border with Somalia is shown on maps as a nervous dotted line.

Like many other poor countries Ethiopia has a history of revolution and corruption which it has not yet left behind. Poverty is extreme, the streets populated with beggars and crippled war victims. Life is hard, with little if any state support for the 80 million citizens. The crime rate is low, crime against visitors almost unknown in the capital Addis Ababa. 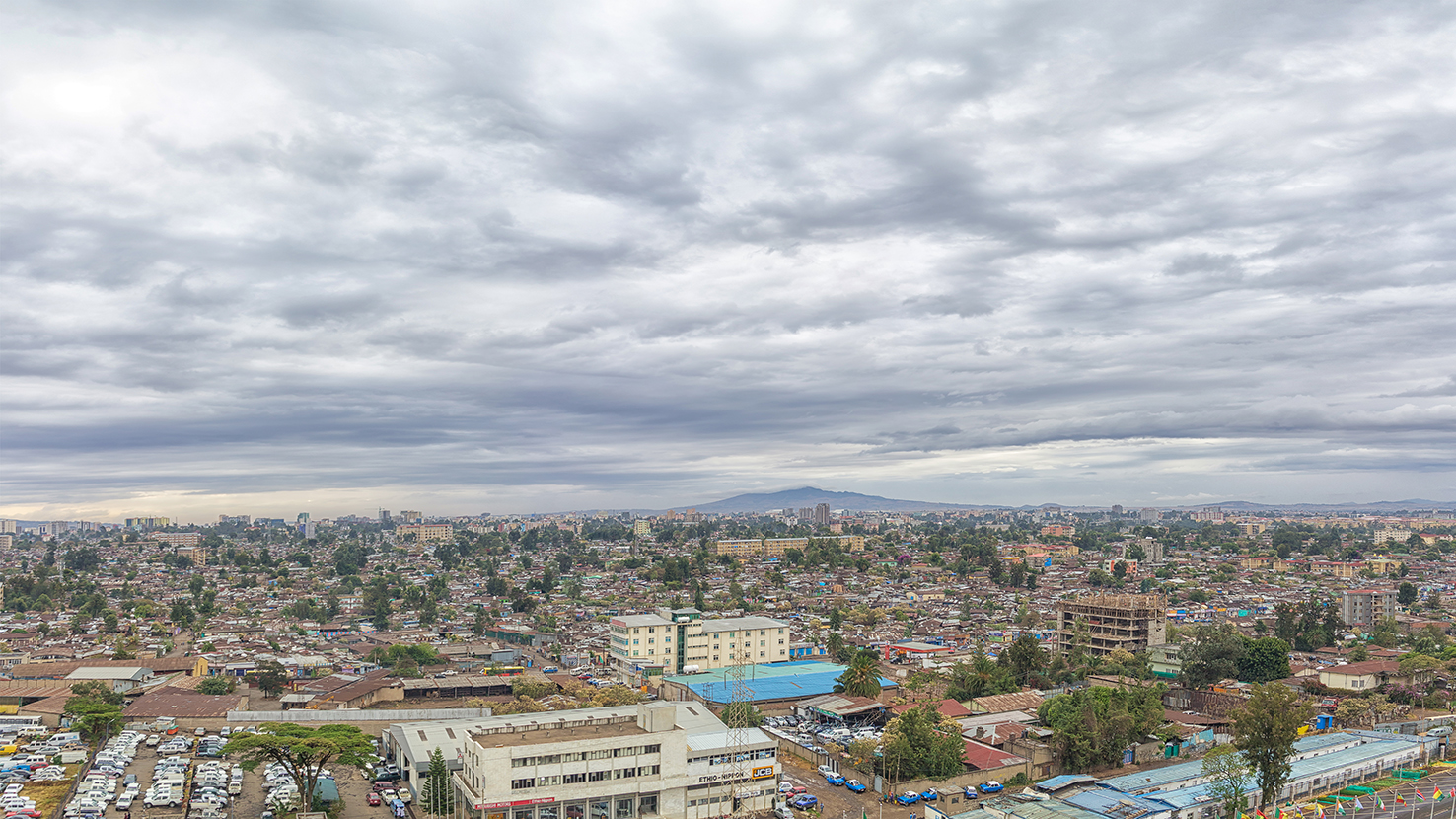 Aerial view of the city of Addis Ababa, showing the densely packed houses 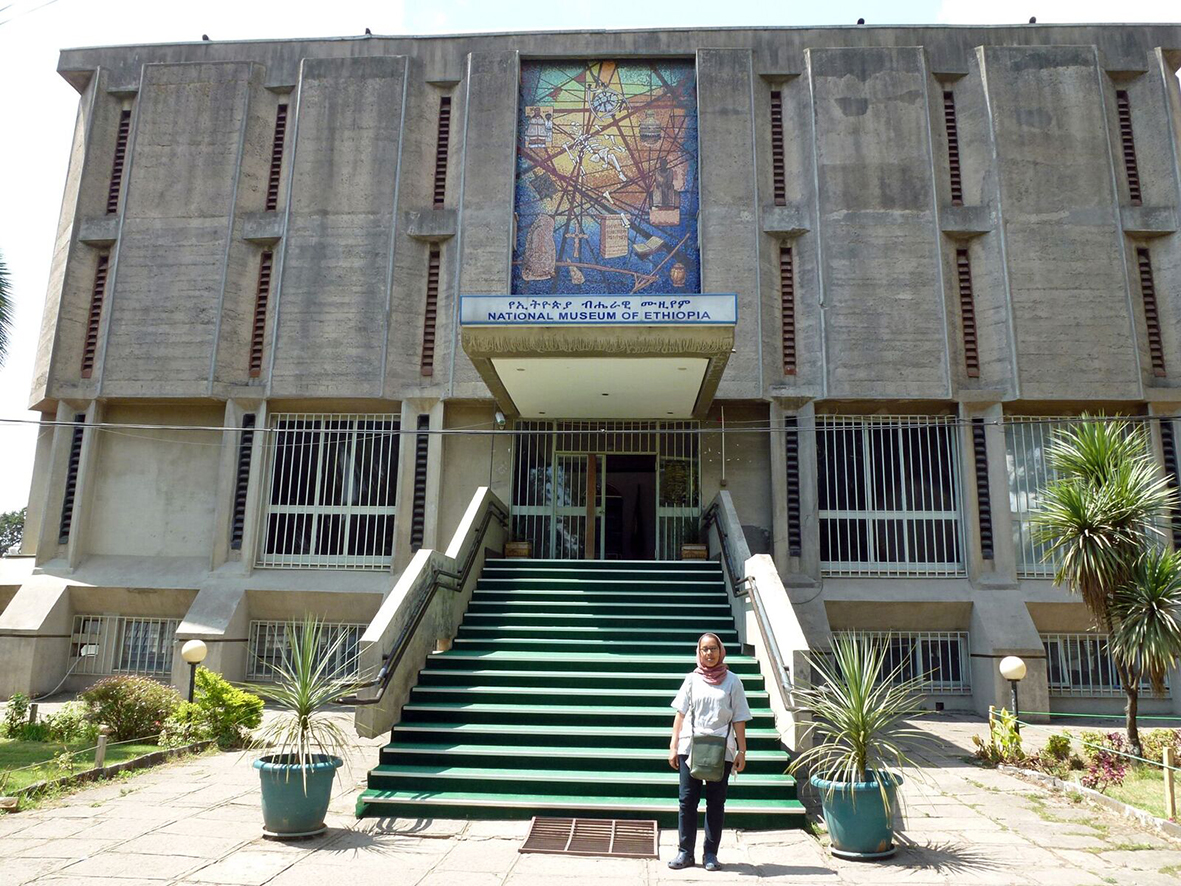 Genet at the National museum

Come again? In Addis Ababa, escorted by Genet my female Coptic Christian guide and travelling crammed into the ubiquitous public mini-buses, heavily armed police and army everywhere, I never once felt threatened. I have been in some dodgy situations in the Caribbean and Central America but the experience was not repeated here.

By the time I made my third visit in 2015 the atmosphere had changed a little for the foreigner due to the deteriorating international situation and a newly elected government unpopular with some sections of the population. There is always the risk of the kind of attacks on hotels that have happened in Mali, Kenya and Somalia, but take care and Ethiopia is the most welcoming and hospitable of countries, though with a minimal tourism industry.

Why is Ethiopia, with memory of the Derg Red Terror and 100,000 deaths barely twenty years old and with fighting today on most of its borders, so safe for the traveller who follows the rules? Perhaps it is because Ethiopia has never been occupied by a foreign power. The nearest to achieving it were the Italians in WW2, but they never really established themselves and were ejected with the help of the British. Crucially, Britain did not attempt to stay in place of the Italians. Winston Churchill Avenue sweeps magnificently through the centre of Addis. 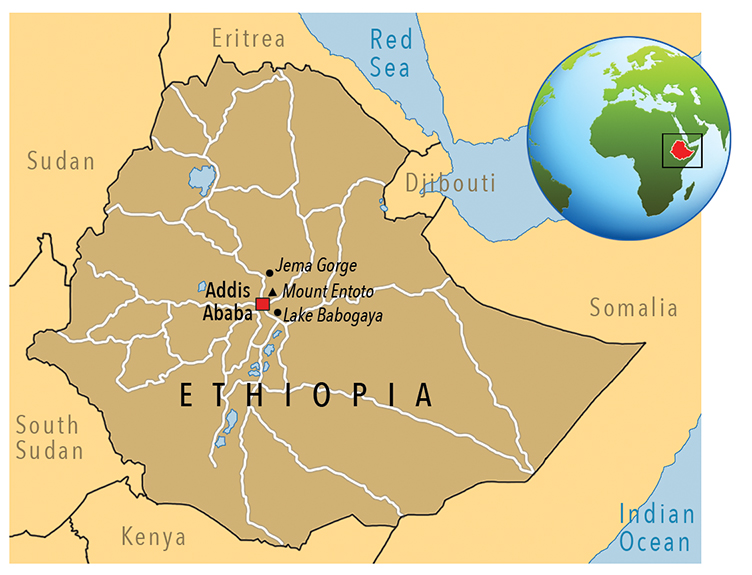 Perhaps it is because Ethiopia has a legitimate claim to be the oldest nation on earth. Perhaps, though Genet laughed at the Darwinism, it is because Homo Sapiens originated in the Great Rift Valley. I paid my respects to Lucy, the first hominid, in the National Museum.

These were work trips, for a British examination board. Like any sensible traveller I arranged time for exploration around the work. Here are impressions of the capital Addis Ababa and trips out to the mountains, the high savannah, and a tributary to the Blue Nile.

Addis Ababa hosts the secretariat of the African Union. It is second only to New York in the number of embassies it hosts. One of the Union’s semi-annual meetings was underway, with the added distraction of a visit by Barack Obama. Motorcades roared hither and thither, traffic halted by police and army alike. It is always somewhat alarming to see how casually weapons are handled. I saw several shoulder slung AK47s with the safety off.

The few new vehicles on the roads belong to the government and the embassies. (The US embassy looks like some-thing crouching on a hill in ancient Rome.) There are not many vehicles per head of population, but plenty of them them nevertheless. Traffic laws are not obvious. There are several huge roundabouts. Imagine the Place de la Bastille without road markings, direction signs, central refuge, rules of precedence, recognis-able circulatory system, or the Gallic driver’s innate sense of courtesy and fair play. It is assumed you know where you are going. The idea is to head for your exit by the shortest route, negotiating with fellow road users along the way. Yes, there are a lot of accidents. 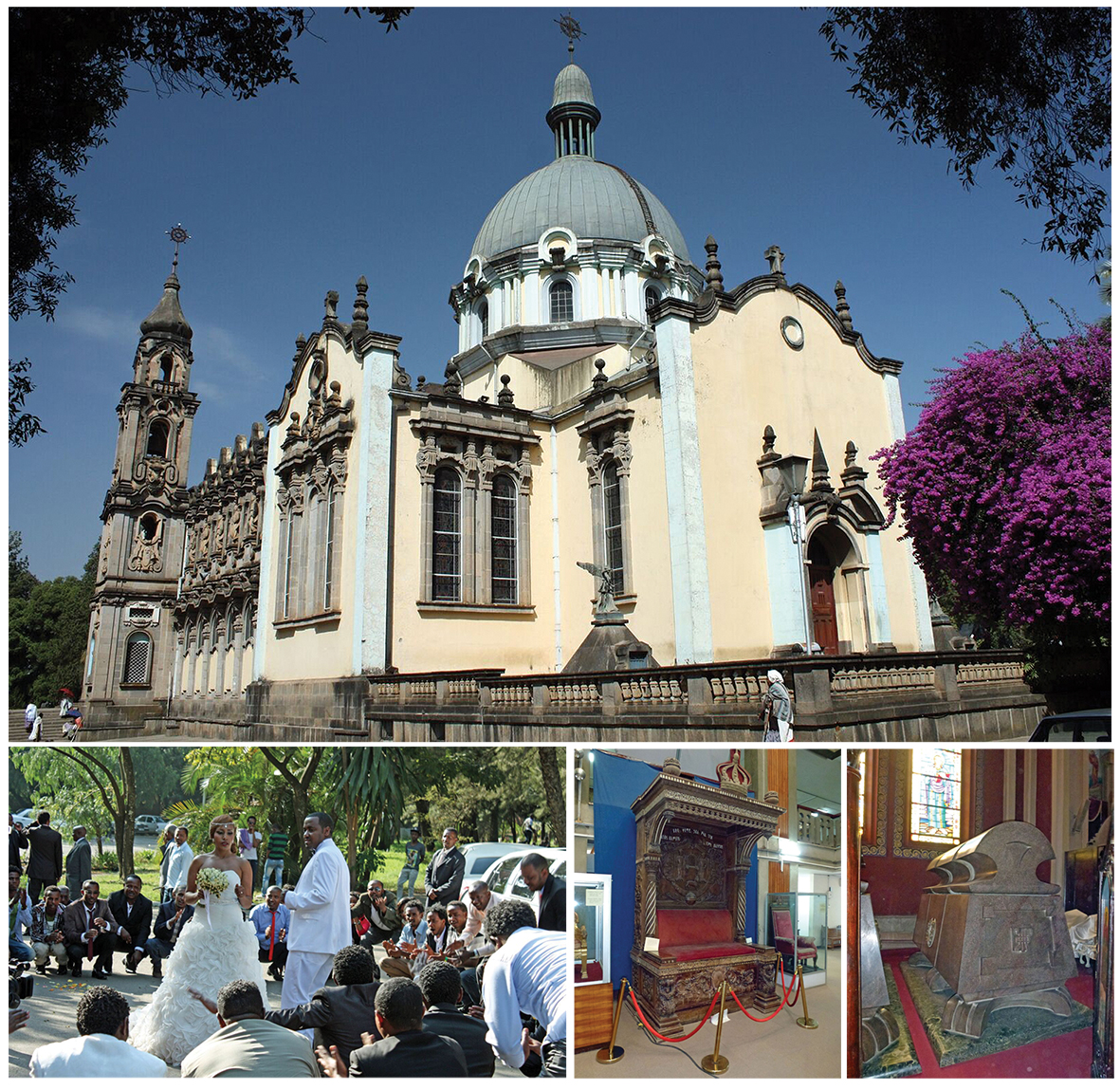 January is the wedding season. Getting married can cost more than buying a house. The wedding ceremony is followed by a raucous car procession to a park, where the bride and groom with their four bridesmaids and four best men perform a traditional dance. Music is supplied by a saxophonist – Ethiopians love the instrument – and everything is captured on video. In two hours at the park we saw at least five wedding parties. The next day there is a reception by the bride’s parents. All ten main characters have a new costume for the second day. See how the cost ramps up?

Haile Selassie was deposed by Marxist elements in the army in 1974. The Derg were in turn unseated in 1991, but not before they had unleashed the Red Terror. The country made great steps in reconstruct-ion under the leadership of the Prime Minister Meles Zenawi (who died in office in 2012), though domestic peace has deteriorated since then as factionalism and corruption have increased. Selassie and his wife are entombed in Holy Trinity Cathedral. The priest who showed us round was suspicious of the US dollar bill I proffered until it had been translated into Ethiopian birr. Sylvia Pankhurst, friend and adviser to Haile Selassie, is the only foreigner buried at Holy Trinity Cathedral.

I was allowed to photograph the tomb and throne of Haile Selassie inside the cathedral, but armed soldiers prevented photography of the grave of Meles Zenawi outside. No one could explain the logic.

I asked if Bob Geldof and Live Aid had really made a difference in 1985, at the height of the Derg era. I was left in no doubt that many more than the 400,000 who died in 1983–85 would have perished without the efforts of the uncompromising Irishman. There is a place for him at Holy Trinity alongside Sylvia Pankhurst. 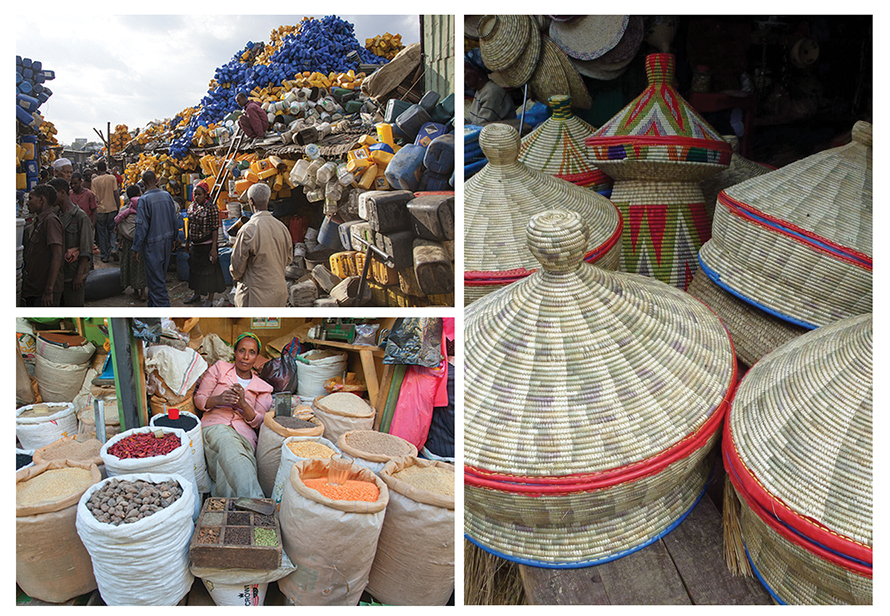 The Mercato is said to be Africa’s biggest market. I believe that. The market is 6km by 4km, with every-thing imaginable on sale. Food comes in from the countryside, bought at the entrances to the city by market traders. A whole huge block is populated by men repairing and recreating everything automotive. Scrap metal is at a premium. Imported goods are mainly plastics from China. This was the only place Genet advised me to take particular care about pickpockets. My ‘care’ was no more than I take in Swansea Market.

Ethiopia is the home of coffee. There is a lengthy ritual associated with drinking it. In a business environment it saves a lot of time if you ask for tea. The clocks in coffee shops were six hours behind my watch – the day starts at dawn, 0600. The Coptic calendar used in Ethiopia and Egypt is seven years and eight months behind the Gregorian calendar. I felt young!

Get names right. Genet explained. “My name is Genet. My card says Ms Genet Mengistu but don’t call me Ms Mengistu – that is my father’s name! Why call me that? I am Woizero (Mrs) Genet.” Everyone is known by their given name. I was Ato (Mr) John.

I went west out of Addis on the road to Djibouti (now supplemented with a rail-way line built by China, opened as TheBAY went to press). The contrasts are jarring. Poor and rich – or at least well off – of course, but infrastructure as well. We drove on a fragment of a new motorway, also Chinese, complete with French style tolls. Then the tarmac ends at a drop onto an unmade dirt road full of battered Tata-built lorries. 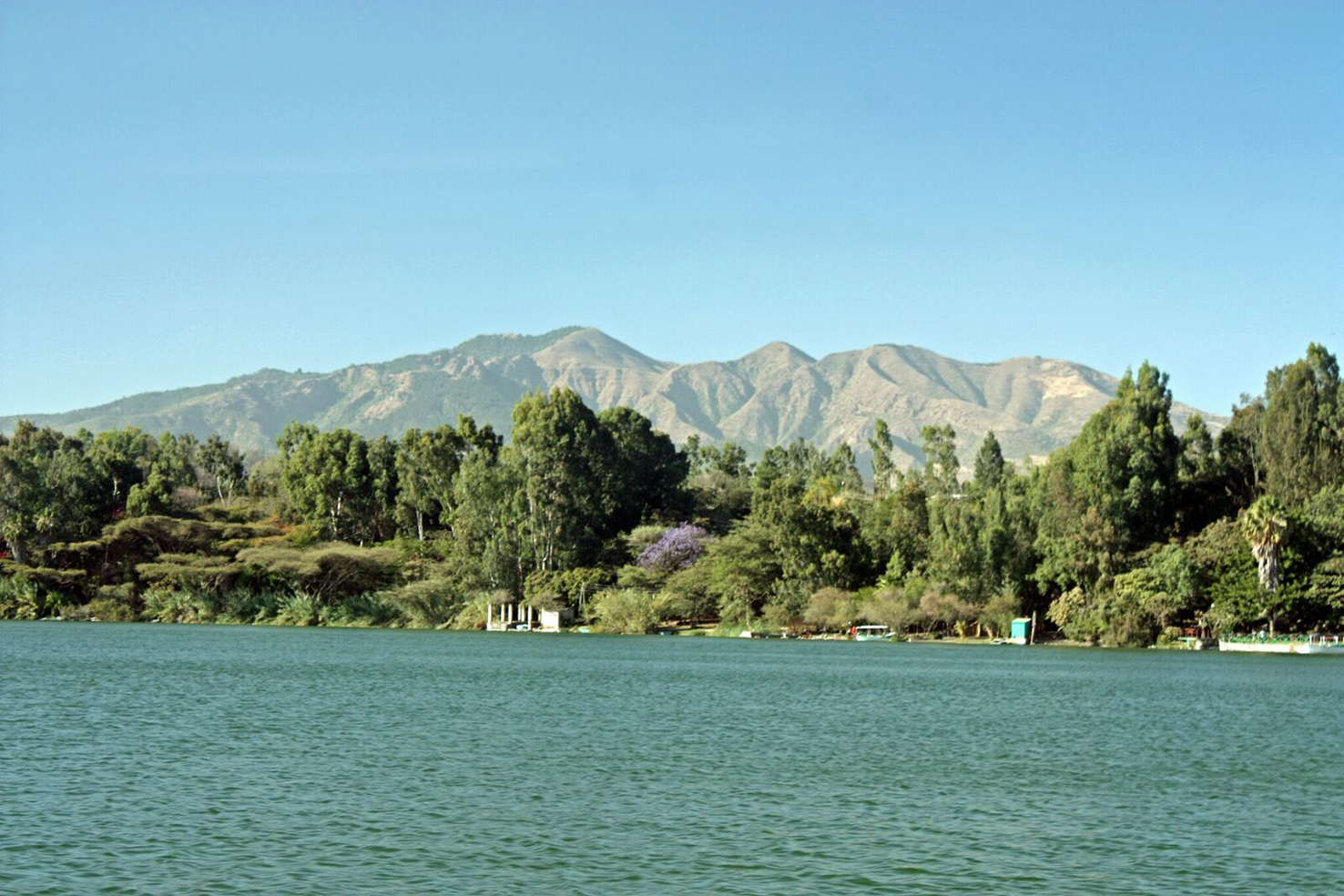 Clockwise from the top: Lake Babogaya – Luxury surroundings of at Liesak – Approahing Liesak by boat – Washing cattle in the lake waters

Lake Babogaya is surrounded by mountains, boasts the luxury Liesak Resort, and offers a rowing boat to admire the views from the water. Cattle were being washed in the waters. I took advantage of everything but the washing.

A disadvantage of travel to Ethiopia is that the London flights both ways are at night. Don’t ask me how they work that out, but with an 0200 plane to catch I had a day to venture further out of Addis. A tour operator in the hotel provided a minibus, driver and guide for a very long day. We headed northwest early in the morning to the high savannah and the Jema River Gorge, a tributary of the Blue Nile. 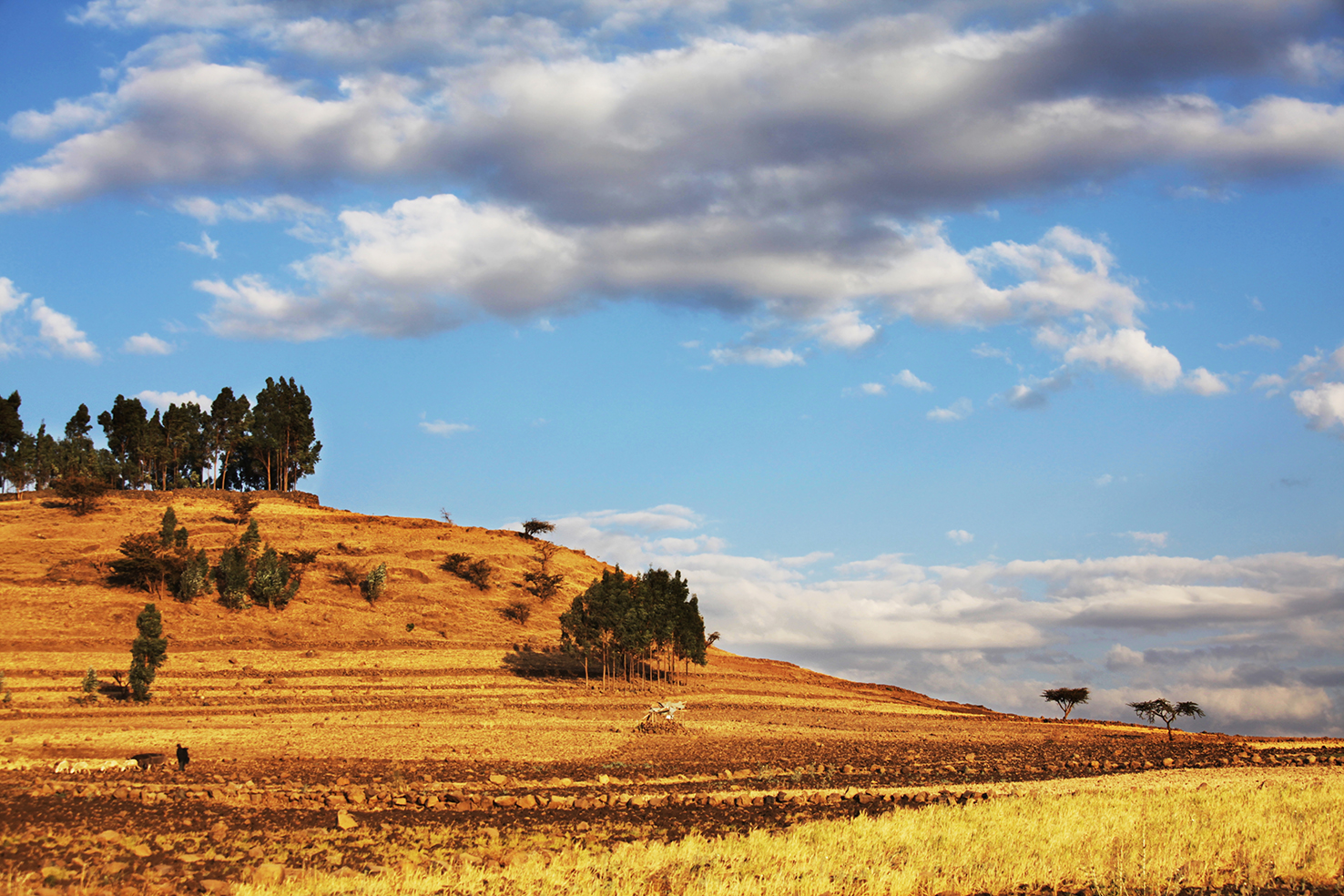 Having crossed the Entoto mountain range we were into the Sululta Plains, the high savannah bread basket of Ethiopia. It was the rainy season, the harvest was in, and the fields were being ploughed. There are thousands of fields. Each is a patch maybe 80 yards across, separated from its neighbours by a strip of grass. There are no fences or hedges. Every field was tilled with a plough pulled by two bullocks and driven by a single ploughman, ploughwoman or plough child. In all that long day I did not see any evidence of automation. No tractors at all. Food for the country of 80 million people is all grown by hand.

At this time I became acutely conscious that I had more cash in US dollars and Ethiopian birr in my wallet for sundry expenses than the average Ethiopian annual income. The trip in the minibus cost the same as a pair of Swans tickets, or four months Ethiopian income. A measure of the wealth (or poverty) of a country is how long it takes to earn enough money to buy an aeroplane ticket out of it. In Ethiopia it takes about three years.

Jema Gorge and the Portuguis Bridge

Ethiopia is famous for its long distance runners. I can see why. Everywhere on the Sululta Plains men, women and children were running, carrying big loads in the thin air. Here high altitude training is a way of life. The walk from the minibus to the Jema Gorge viewpoint involved a 600 foot descent via the Portuguese Bridge (built in the nineteenth century to shorten a very long trade route), starting at 10,000 feet. Then back up. I should have entered the Olympics after that. The floor of the gorge is 3,000 feet below, a spectacular view even on a murky day.

On the last night my hosts took me to a popular restaurant for the traditional meal of injera – a sourdough flatbread served with delicious spicy meats and vegetables – and music and dancing from the many ethnic groups of the country. When we came out the jeep had a flat tyre. A ragged man was crouched asleep against the wall. He woke, saw what we were doing, and offered to change the wheel. When he was done we tried to give him some birr for saving us a messy job in the dark. He grinned, shook our hands, and flatly refused the money. Ethiopia is a proud country.