You’ve seen the opera, you’ve enjoyed the ballet—now read the original poem: Eugene Onegin by famed Russian poet and playwright Alexander Pushkin (after whom the Pushkin Press is named). This fresh translation is a delight to read and perfect for a fireside retreat.

When long-forgotten Viennese poet Eduard Saxberger receives a visit from a young fan who invites him to meet a group of young admirers, the Venerable Poet is catapulted into an alarming yet flattering Bohemian milieu. Schnitzler is a celebrated writer and Late Fame is one of his most perceptive and humorous satirical novels.

Odessa Stories is considered a great masterpiece of 20th century Russian literature. The acclaimed author, Ukrainian Jew Isaac Babel, brings to life the rich voices and colourful characters of the Jews living in the tough Moldavanka Ghetto of the Black Sea port of Odessa. The violent and amoral adventures of mobster Benya Krik, his family, his cohorts and his gangster enemies make hilarious reading. Ideal to cheer you up on a grey winter’s day. 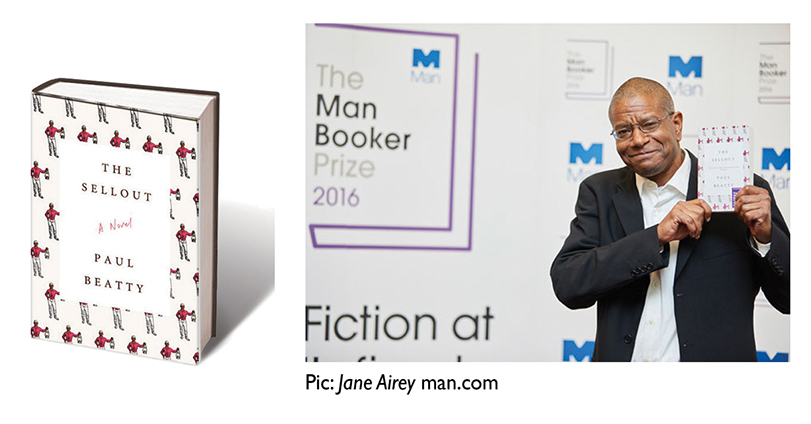 Paul Beatty author of The Sellout is the first American novelist to win the Booker Prize—not surprisingly, since participation has been limited to Commonwealth citizens till very recently. For once, the usually unreliable panel of judges has selected the finest novel from the Booker long – and shortlist, a rare occurrence. Furious reviewers and book-lovers are used to seeing a populist compromise choice winning the award, while outstanding novels are overlooked.

Last year, for example, easily the most brilliant submission, Tom McCarthy’s Satin Island lost to Marlon James’ dreary Brief History of Seven Killings. However the literary world suffered the greatest outrage when magnificent novels of towering literary value, namely Will Self’s Umbrella (2012) and AS Byatt’s The Children’s Book (2009) were rejected in favour of the same writer of utterly unremarkable ‘historical’ novels, Hilary Mantel.

The Booker judging panel has earned credibility with the choice of black American Paul Beatty’s dazzling The Sellout, and redeemed itself by selecting this vital and vigorous modern satire.

This is one of the rare occasions in Booker history when I would urge you without reservation to buy the winning novel and read it. 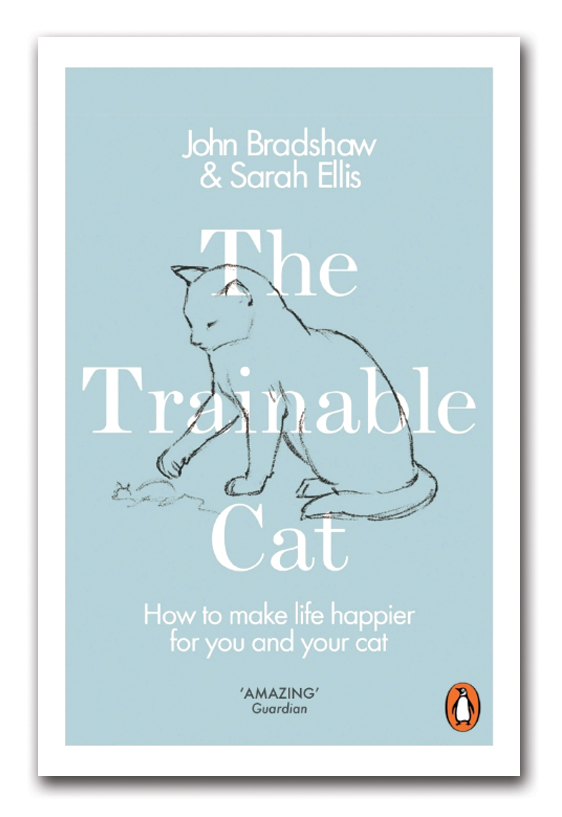 I have been trained by my pet cats for over twenty years now and have as a result become quite a good cat keep-er. I am very pleased to hear that cats are trainable too. In their behavior manual The Trainable Cat, feline experts Bradshaw and Ellis explain in some detail how we can turn the tables and gently teach the cat to behave as we would like it to.

Bradshaw and Ellis, experts who were involved in the BBC’s 2013 televised study of cat behaviour, expound the view, which I certainly share, that domestic cats, now living in an increasingly hazardous indoor or urban environment, need to learn to obey simple commands for their own safety and quality of life.

Despite the popular view of the intransigence of the domestic cat, most cat owners have all had some experience of their malleability. John Bradshaw and Sarah Ellis explain step-by-step how to teach your feline to obey simple commands that will safeguard the cat against quotidian dangers indoors and outdoors.

The Trainable Cat will fascinate and inform all cat lovers who want to experience the delight of happy cats in the home. 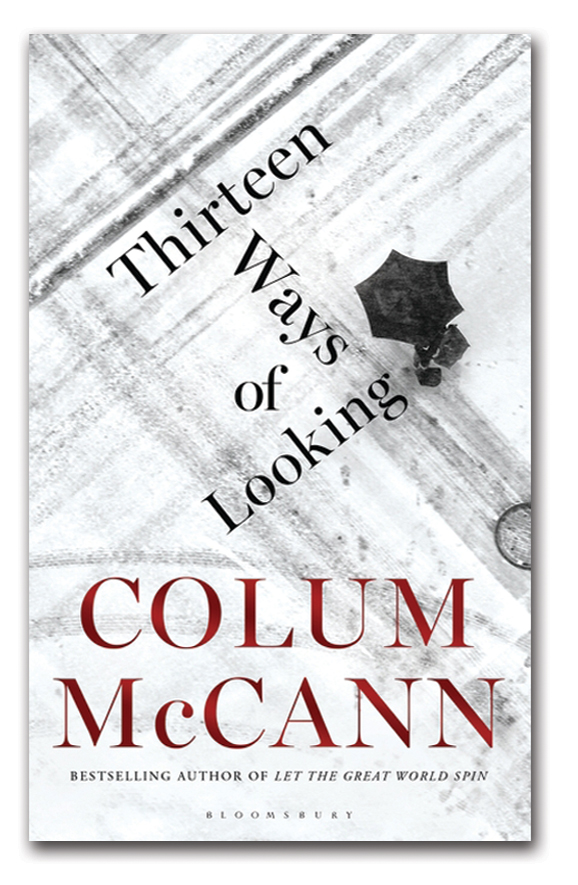 Irish-born Colum McCann’s 2013 Booker longlisted novel, the memorable TransAtlantic was reviewed in this column, a novel with unusual subject matter, viz the narrative of the first transatlantic flight by Alcock and Brown juxtaposed with the story of Frederick Douglass, the black American slave who influenced thought on democracy and freedom in famine-haunted Ireland. This book should unquestionably have displaced several submissions of indifferent quality on the 2013 Booker shortlist.

McCann excels himself in his latest offering Thirteen Ways Of Looking which consists of an eponymous novella and three short stories. Each of the thirteen chapters of the novella is preceded by a small exquisite haiku-like poem featuring a blackbird.

Thirteen Ways of Looking, set in New York, is a sensitive portrayal of Jewish octogenarian Peter Mandelssohn, a retired Supreme Court judge, once hugely respected and now living out his final years, a widower looked after by his black ‘help’ Sally.

In sharp counterpoint is Peter’s rich and successful Hooray Henry son Elliott; as Peter reflects the best in civilised humanity, so Elliott epitomises the ugly face of crude hedge-fund wealth. The pair meet for lunch with violent consequences.

The three other stories are set in Afghanistan, Galway and London and are powerful vignettes of three unusual lives in three unlikely situations.

Colum McCann’s voice is beautiful and evocative throughout. His tone is sometimes playful, but largely contemplative: this book is full of narrative surprises. McCann’s style is impeccable, each word carefully selected, each expressive phrase perfectly placed. With Thirteen Ways of Looking, McCann takes a very definite place among the best writers of contemporary fiction today. 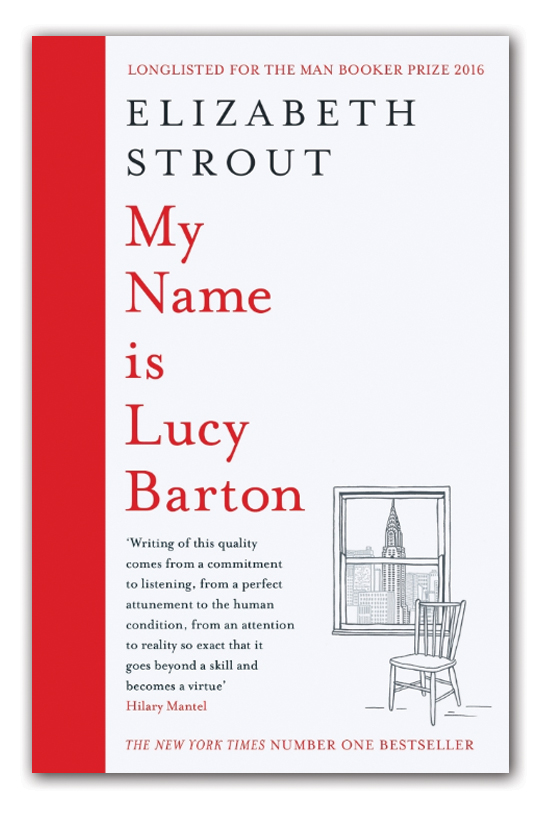 My Name Is Lucy Barton by Elizabeth Strout (Viking £12.99)

Pulitzer-prize winning American writer Elizabeth Strout attains best-seller status for her novels across the English speaking world. My Name Is Lucy Barton, visible on every best-seller list, (and on the Booker 2016 longlist) is a well-written rags to riches account of a woman writer’s escape from a childhood of abject poverty to a respectable status as a college graduate, leading the life of a middle-class professional.

Lucy Barton’s unremarkable story is told from her hospital bed where she is being treated for an unnamed illness. Her mother, who does not appear to have any maternal instincts at all, is summoned by Lucy’s husband to help with the care of her daughter.

The visit triggers a host of memories as Lucy takes us through the misery of her neglected childhood, to her well-earned academic and professional success.

Strout is an extremely popular contemporary novelist, and it is easy to see why. My Name Is Lucy Barton is both well-written and unchallenging. It is a simple story, well-told, easy to read and accessible to all. 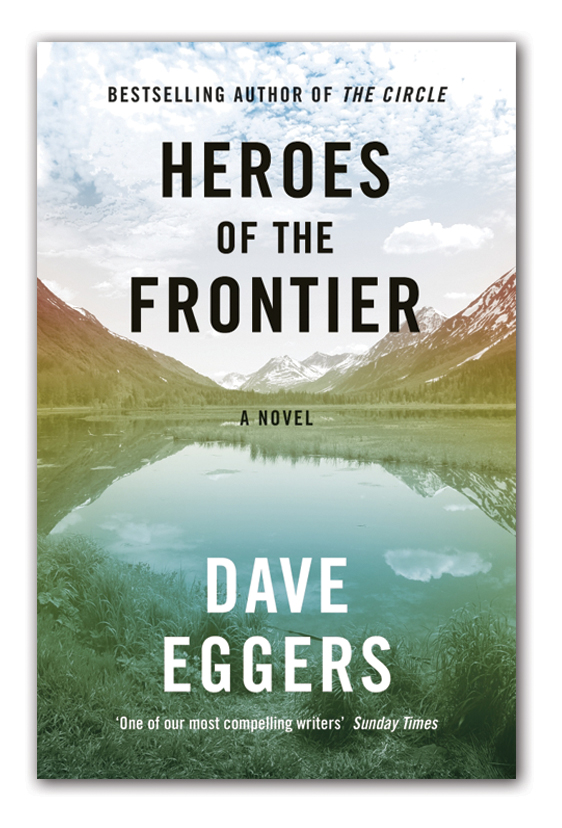 Heroes of the Frontier by Dave Eggers (Hamish Hamilton £18.99)

The works of American award-winning novelist Dave Eggers have been reviewed in this column enthusiastically. Eggers’ inventive genius is in dazzling evidence in every novel he writes, dealing with equal virtuosity on diverse themes— about American businessmen in the Middle East (Hologram for a King), a US cyber-conspiracy (The Circle), and most recently about a hostage drama where the kidnapper is only seeking answers (Your Fathers, Where Are They?).

Eggers’ latest work Heroes of the Frontier appears to bring the thesis of the seminal English religious writer John Bunyan, The Pilgrim’s Progress (1678), into contemporary life —without a single direct reference to this work. Heroes of the Frontier starts off with Josie, a young dentist in Ohio who loses her clinic as a result of a malpractice suit; her useless husband has left her with two young children Ana and Paul, and she is truly in the ‘City of Despair’, entering the ‘Slough of Despond’. She is driven by her situation to take off for Alaska with the children for a reunion with Pam, her ‘sort of half-sister’.

Josie starts her Alaskan adventure by hiring a decrepit old Recreation Vehicle (RV), a type of American mobile home, driving across the state through deep forests and remote towns, getting to know her children, but above all, encountering a multiplicity of people, fears, problems and situations that challenge her underdeveloped psyche. She stays on the move, fleeing uncomfortable people, fearsome fires and approaches from creepy strangers.

During her jouney, as she is impelled to move ever forward, she finds she is slowly becoming more in tune with herself, her children and her constantly changing environment. The parallels with Bunyan are quite deliberate, well sign-posted and numerous. Josie lives in a silver mine, experiences a mountain of fire, survives a great storm and seems to be the modern-day re-creation of Christiana, protagonist of Part 2 of John Bunyan’s Pilgrim’s Progress, who also embarks on a journey with her children.

Josie conquers a multitude of anxieties and depressions to end up in a remote mountain cabin, and finally ‘knew that this was who and where they were supposed to be’.

Subtle and beautifully written, Dave Eggers’ Heroes of the Frontier is a modern spiritual parable without any heavy or sententious references to the source of his inspiration. 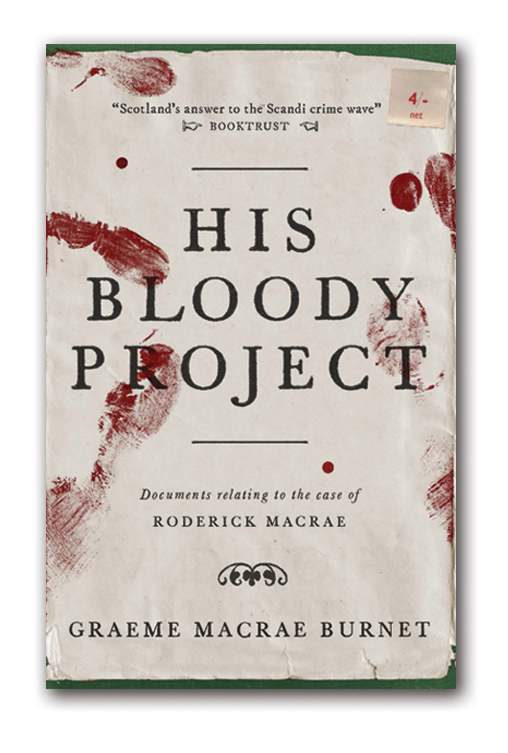 On the 2016 Booker shortlist was a remarkably interesting novel which I regrettably did not receive in time for the final shortlist reviews. The little-known Scottish publisher Contraband was not geared for the mainstream suc-cess of this sub-mission, but the book demands attention for its aloof quality, maintained even when describing events of great physical violence. His Bloody Project is a moving narrative of life in an impoverished croft and the desperation that led to the brutal murders of Constable Lachlan Mackenzie and his two children by the oppressed young crofter Roderick Macrae.

Graeme Macrae Burnet tells the affecting story of poor murderous Roderick Macrae in a detached, unembellished style, engaging the reader wholly in the pathos surrounding the crime. The protagonist’s violent reaction to years of parental abuse and official harrassment bears the dreadful inevit-ability of a Greek tragedy.

Burnet tells his story in the form of witness statements, medical reports, and other legal documents that shed light on aspects of the Scottish legal system. Each evidence statement is crafted superbly so as to create a vivid overall picture of the village of Culdie and its residents, the harshness of the environment and the haughty indifference of feudal officialdom.

Graeme Macrae Burnet is a gifted writer and His Bloody Project has earned well-deserved critical acclaim. Though it has not won the Book-er it will definitely attract other literary prizes. 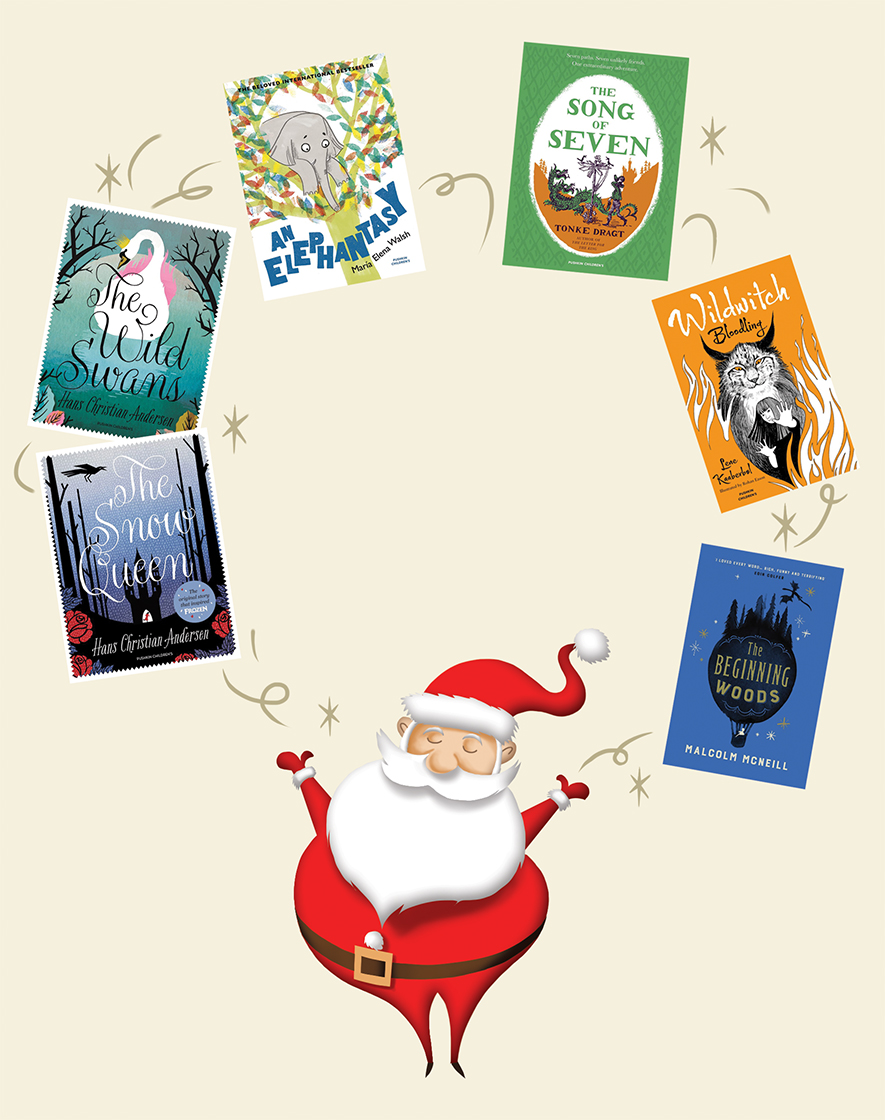 ONLY THE BEST WILL DO

Pushkin’s 2016 selection of the best national and international books for children will beguile the whole family with their classic beauty, perfect prose and stimulating thoughts and ideas. These books explore the thin border between fantasy and reality with plenty of weird and scary happenings. Traditional themes of childhood innocence and purity pitched against dark forces, and the triumph of good over evil continue to enrapture children of all ages—and their parents!

Droll and charming, the friendly elephant Dailan Kifki is happy to join in all the adventures his adopted family embark on with hilarious results. Argentinian author Maria Elene Walsh has frequently been compared to Lewis Carroll for her wonderful inventiveness.

A fresh new translation of these two classic fairy tales by Hans Christian Andersen recreates the lyrical beauty and pathos of the Danish genius’ evergreen stories for children of all ages.

English writer Malcolm McNeill’s debut novel takes the reader straight into the realms of fantasy with his action-packed novel about the mystery of the Vanishings. Children and adults alike will be enthralled by the surreal happenings in the Beginning Woods.

This is the latest in the Wildwitch series, tales of Clara ,a schoolgirl witch and all her Wildworld friends. Dark secrets and eerie happenings make for a  marvellous and memorable read.

The Song of Seven by Tonke Dragt Translated by Laura Watkinson (Pushkin Children’s £12.99)

Meet Frans the village schoolteacher whose classroom stories told to amuse his pupils come excitingly true and they are all drawn into the mystery of  the house of stairs and the conspiracy of seven. A rivetting story.