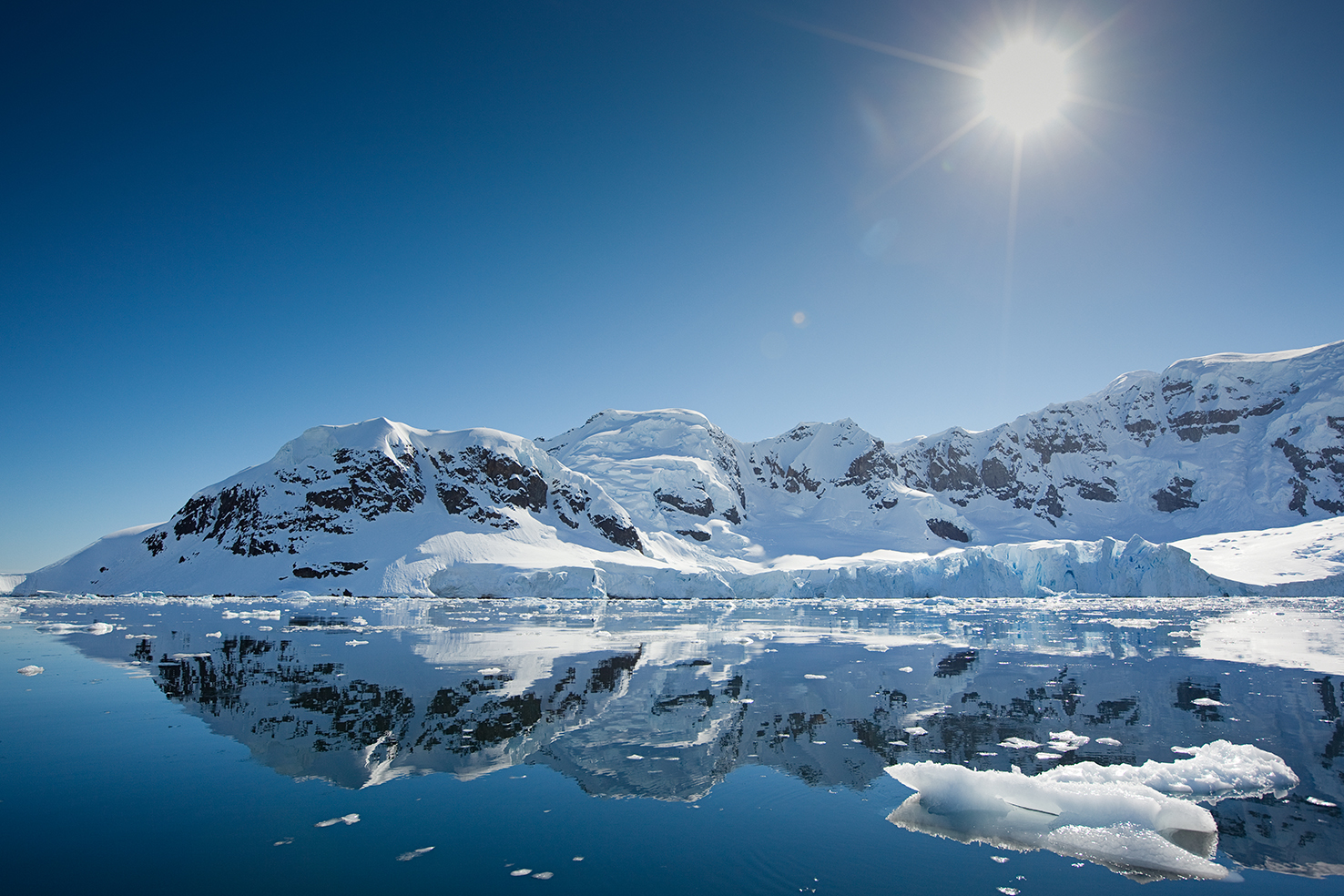 Antarctica is the coldest, most inhospitable and far-flung place on earth. So why would anyone want to go there just to see a few penguins and icebergs? Because it’s also the best place on earth, says local travel writer and photographer Nick Smith, who journeyed from the Gower Peninsula to the Antarctic Peninsula. Bay Magazine is delighted to be able to count Nick amongst its contributors for 2017.

People never seem to get tired of saying that it’s a small world. But it’s not until you’ve actually set foot on the continent of Antarctica that you begin to realise how truly enormous it really is. Think about it: more than five million square miles of totally and utterly deserted and inhospitable frozen landmass. Okay, there are a few thousand scientists down there and maybe at any given point a dozen or so explorers skiing across the icecap for the hell of it. But other than that, there’s simply nobody there. Just to rub it in, there’s no such thing as an Antarctican citizen (although, admittedly one human baby has been born there). 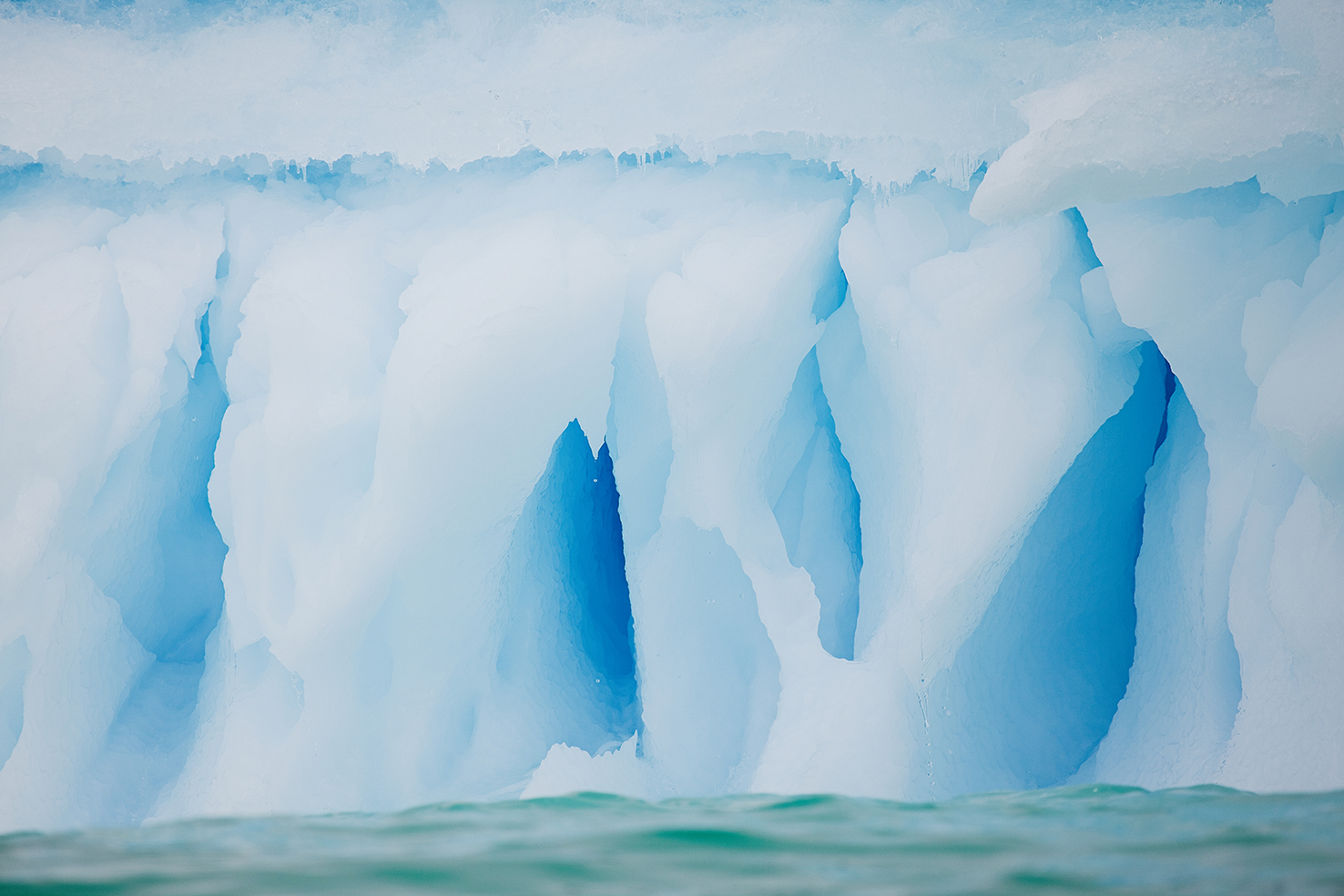 It’s not so much another world as another planet. And people who tell you it’s a small world are those who do their travelling from armchairs in front of their TV. Talking of which, don’t think those broad majestic vistas of Antarctica you see on the plasma screen (soundtrack courtesy of terrible synthesiser music and a breathless David Attenborough) come anywhere close to being anything like a decent substitute for the real experience. And that is because nothing – and I mean absolutely nothing – can prepare you for being the most isolated human on the planet. In Antarctica you can look in any direction, and apart from the people you are traveling with, there won’t be another living human soul within a radius of 500 miles. Before you set off, you’re told that if something goes seriously wrong, it’s unlikely you’ll be rescued and you’ll die. The odd thing about that particular health and safety lecture is that you simply don’t care. And it wasn’t just me. As we prepared to disembark the port of Ushuaia in Argentina, every one of the ship’s complement was beyond anxious to set sail on their adventure, to leave behind the world of traffic jams and mobile phones, pollution and 21st century hassle.

And that’s because Antarctica is the dream. Well, it was my dream in any case. Ever since I first heard the unbearably heroic story of Captain Robert Falcon Scott of the Royal Navy in my geography lessons at Olchfa School, I’d been hooked on the southern ice. Of course, we now know that Scott’s tragedy was avoidable, and there can’t be many people of Swansea who are unaware that one of Scott’s five-strong polar party a century ago was Edgar Evans of Middleton, near Rhossili. If you go inside St Mary’s Church just by the bus stop, you’ll find a plaque on the wall put there by his widow Lois, with the immortal line from Tennyson’s Ulysses: ‘To strive, to seek, to find, and not to yield.’ That very same line is carved on a wooden cross at Observation Hill in Antarctica, memorialising Scott and the men who bravely died with him on their way home from the pole. 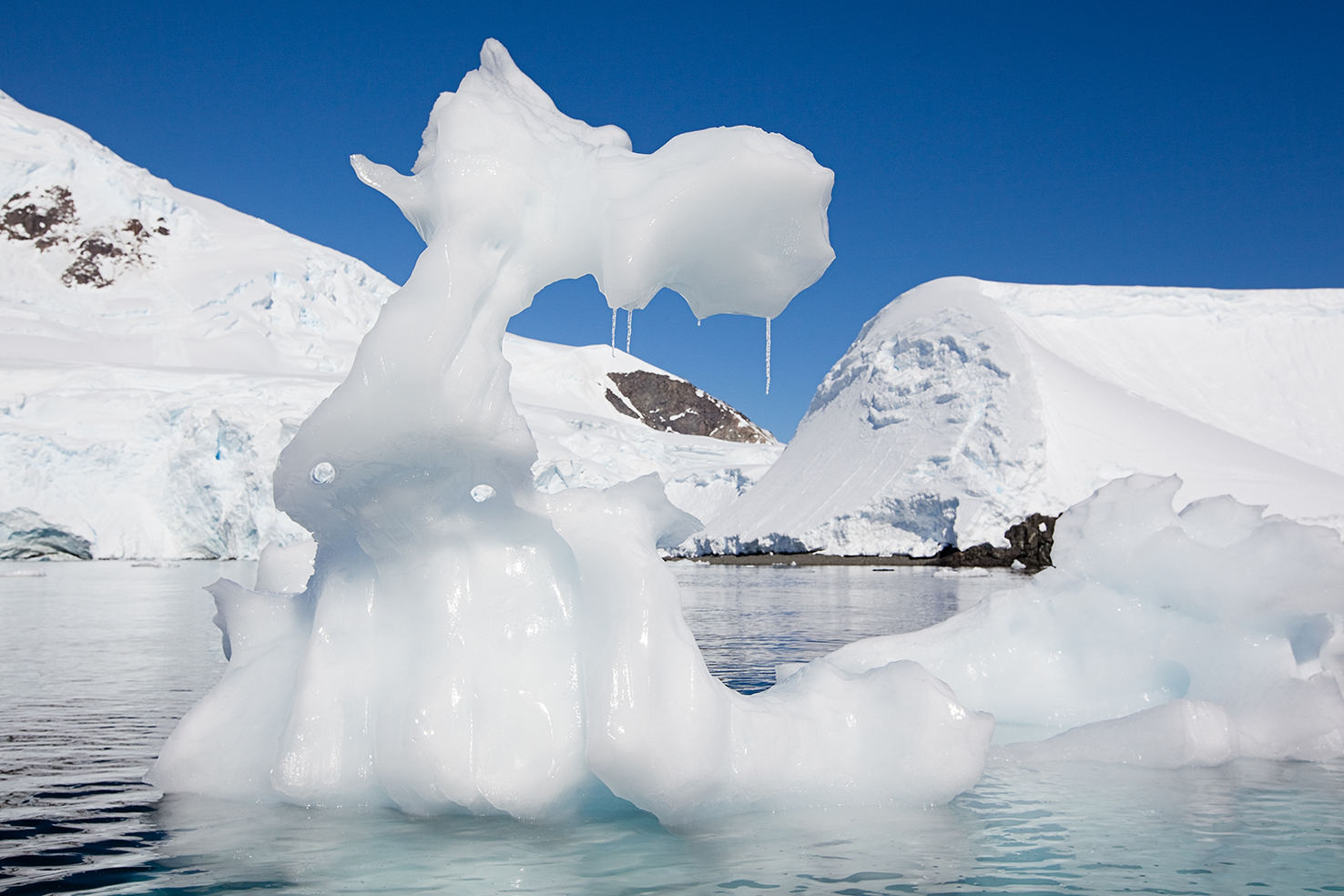 These stories of Scott and, of course, his rivals Sir Ernest Shackleton and Roald Amundsen, come from what is now quite rightly called ‘The Heroic Age of Antarctica Exploration’, covering the period 1897-1922, in which there were 17 expeditions by teams from Britain, France, Norway, Australia and New Zealand, Japan, Belgium, Sweden and Germany. For a quarter of a century these eccentric pioneers were busy mapping the bottom of the world in the interests of science and political gain. But of course the real game was to get to the pole. We know that Britain was pipped to the post by the Norwegians who, rather unsportingly, used dogs as their main means of propulsion. Had Scott swallowed his pride and allowed canines on his expedition manifest, he might have lived to tell the tale. But the naval man didn’t think that using dogs was the British way of doing things and paid for his hubris with his life. 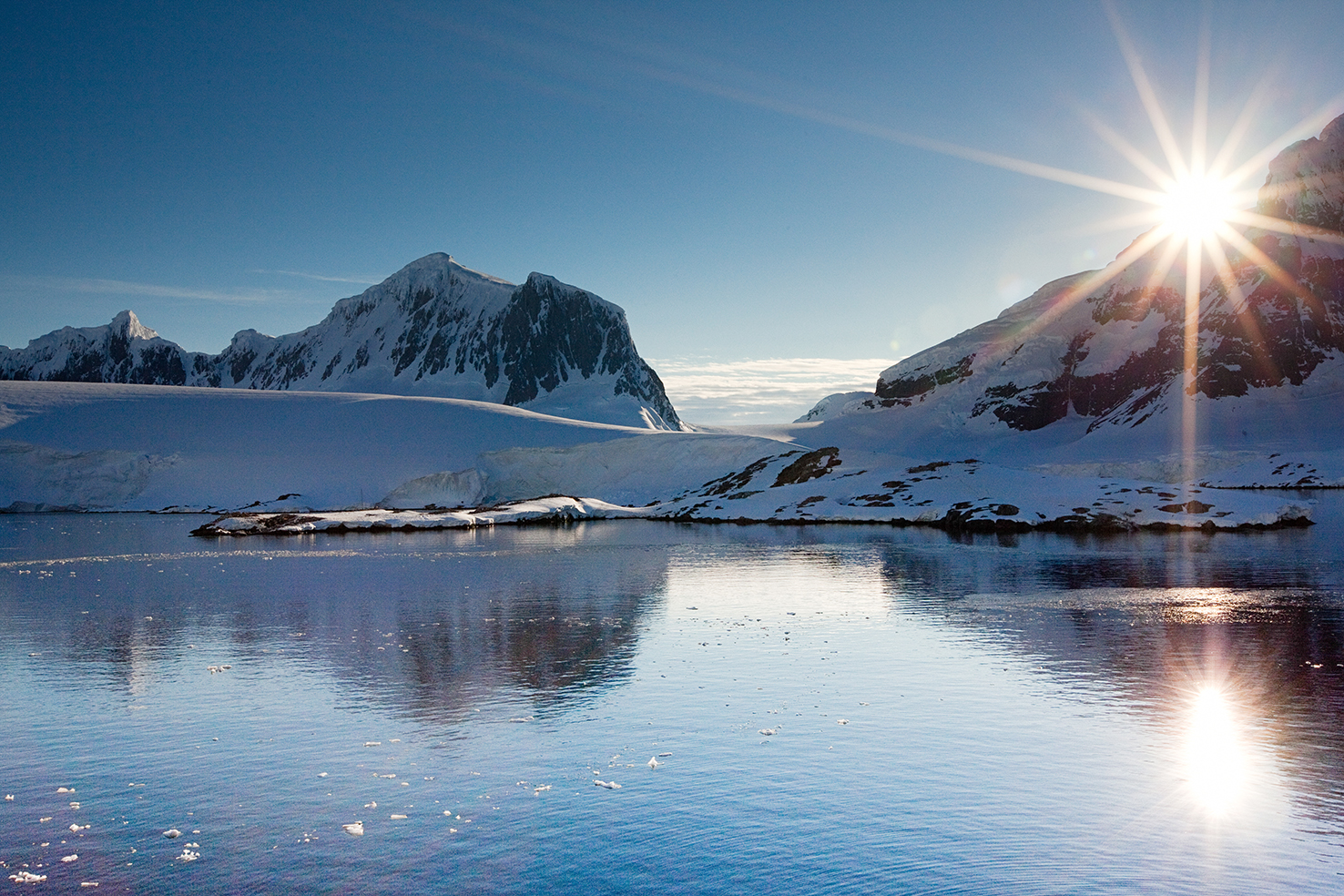 Although I’d read these stories again and again as a kid, I never once seriously thought I’d set foot on the White Continent. But a few years ago I was at a boozy function at London’s Dulwich College (where the great Shackleton failed to distinguish himself as a schoolboy) clustered around the retired James Caird lifeboat that had played such an important role in rescuing the crew of the Boss’s ill-fated Endurance expedition from Elephant Island a century ago. At some point in the evening a photographer friend of mine told me that there was a spare place on a ship going South from Ushuaia (the world’s southernmost city on the tip of Tierra del Fuego, Argentina), and that I could get myself on board as a stowaway if I was prepared to ‘sing for my supper’ (a thinly disguised euphemism for offering myself up as an unpaid photographer in residence). I agreed. Phone calls were made, emails sent, insurance and medical forms filed, and a total of six plane tickets organised (that’s London to Madrid to Buenos Aires to Ushuaia … and back). As I’d been to the Arctic before, I had a ton of cold weather gear, so all I really had to do was make sure I had plenty of cameras. 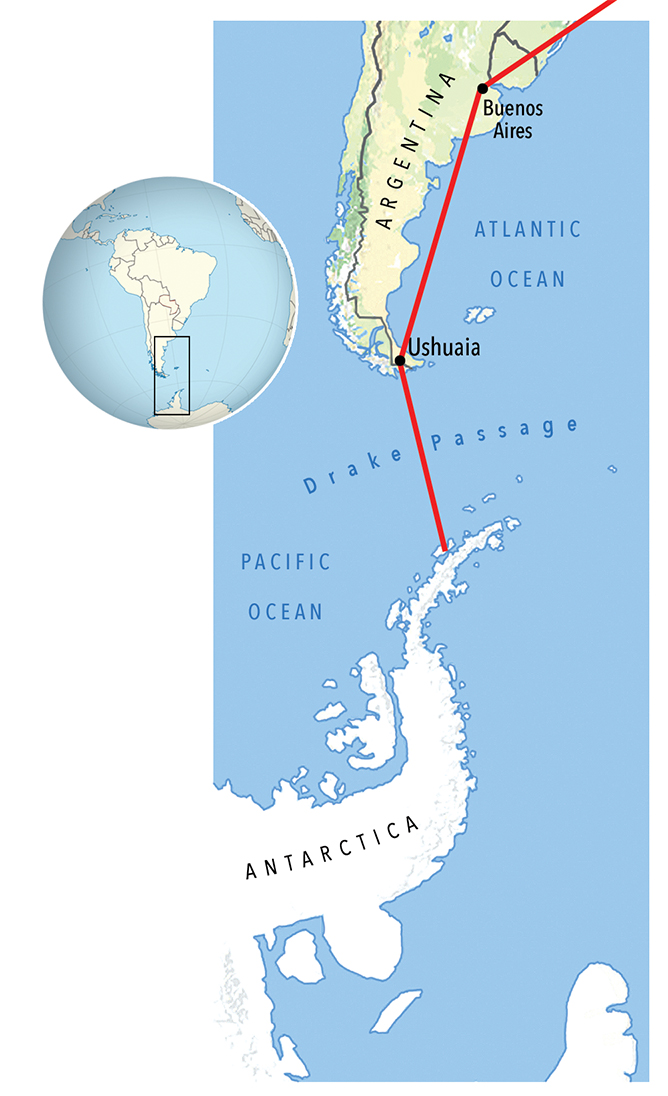 After two days flying the 8,314 miles from London to Ushuaia, I sailed south aboard the good ship Plancius, named after the Dutch astronomer, berthed in a cabin no bigger than a kitchen pantry along with two Spaniards and a Russian, without a single word of common language between us. My noble companions then threw up noisily for the following three days as we crossed the Drake Passage on a bearing for the Antarctic peninsular. The Drake is notorious for having the roughest seas of the world, as the southern currents spiral around the planet, without any intervening continents to put the brakes on the mountainous rollers that seemed to swallow the Plancius at every turn. That far south, during the Austral Summer, there is virtually 24-hour daylight, and so plagued by insomnia and the reek of my literally nauseating cabin mates, I was forced to get whatever sleep I could scrape together on the floor of the ship’s bar. Not as easy as it sounds. The 24-hour bar literally never closed and was complimentary, meaning that I was competing for space among the more seaworthy of my travelling companions, who had evidently decided that alcohol was the homeopathic prophylactic against seasickness. For three days the seas roared and raged, the same seas Shackleton had crossed back in 1916 with a crew of five in the James Caird with only a sextant and a chronometer to guide him. For 16 days he battled the Drake and, as I peered through the porthole, I drew the conclusion that I had no idea how he had achieved such a monumental feat. 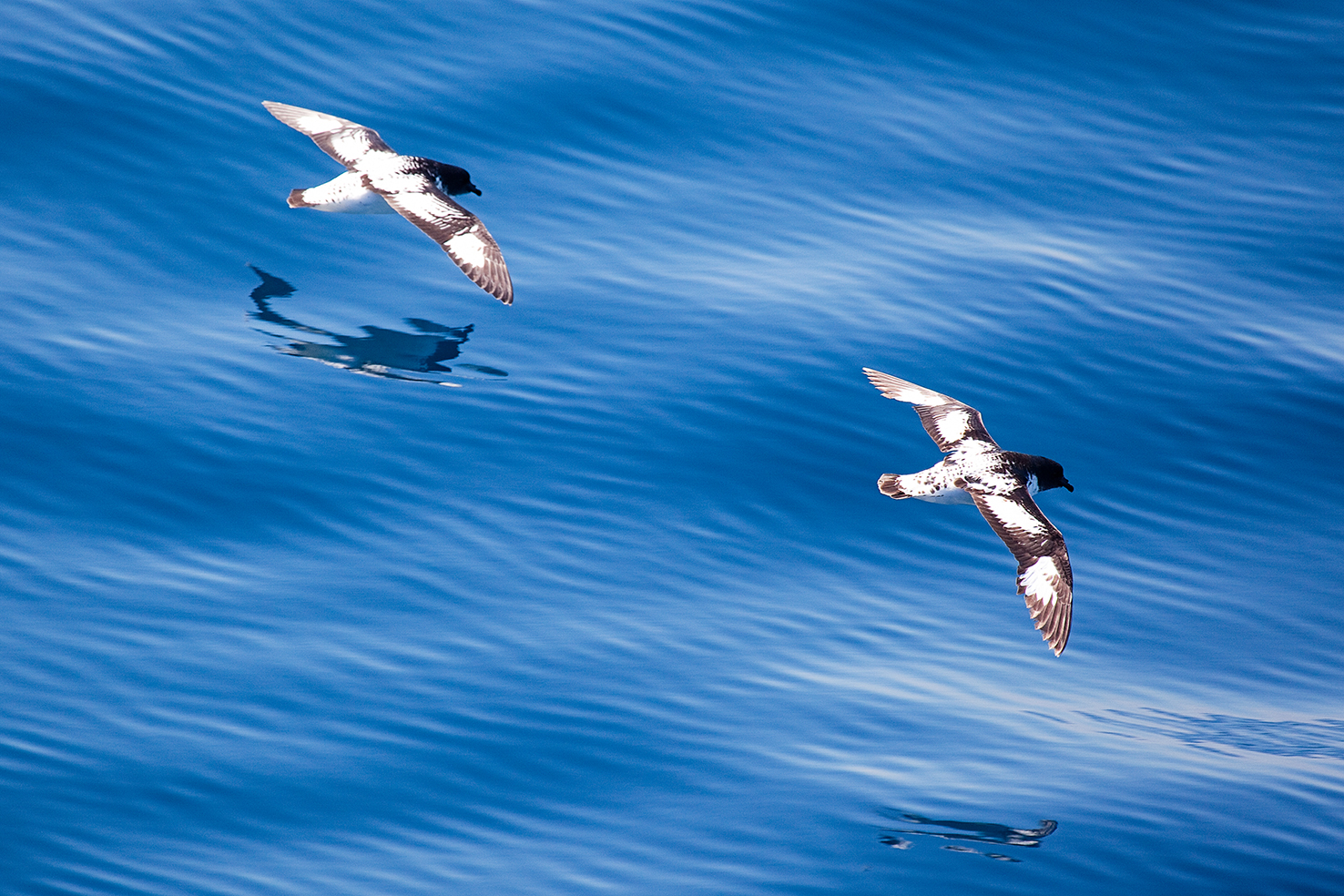 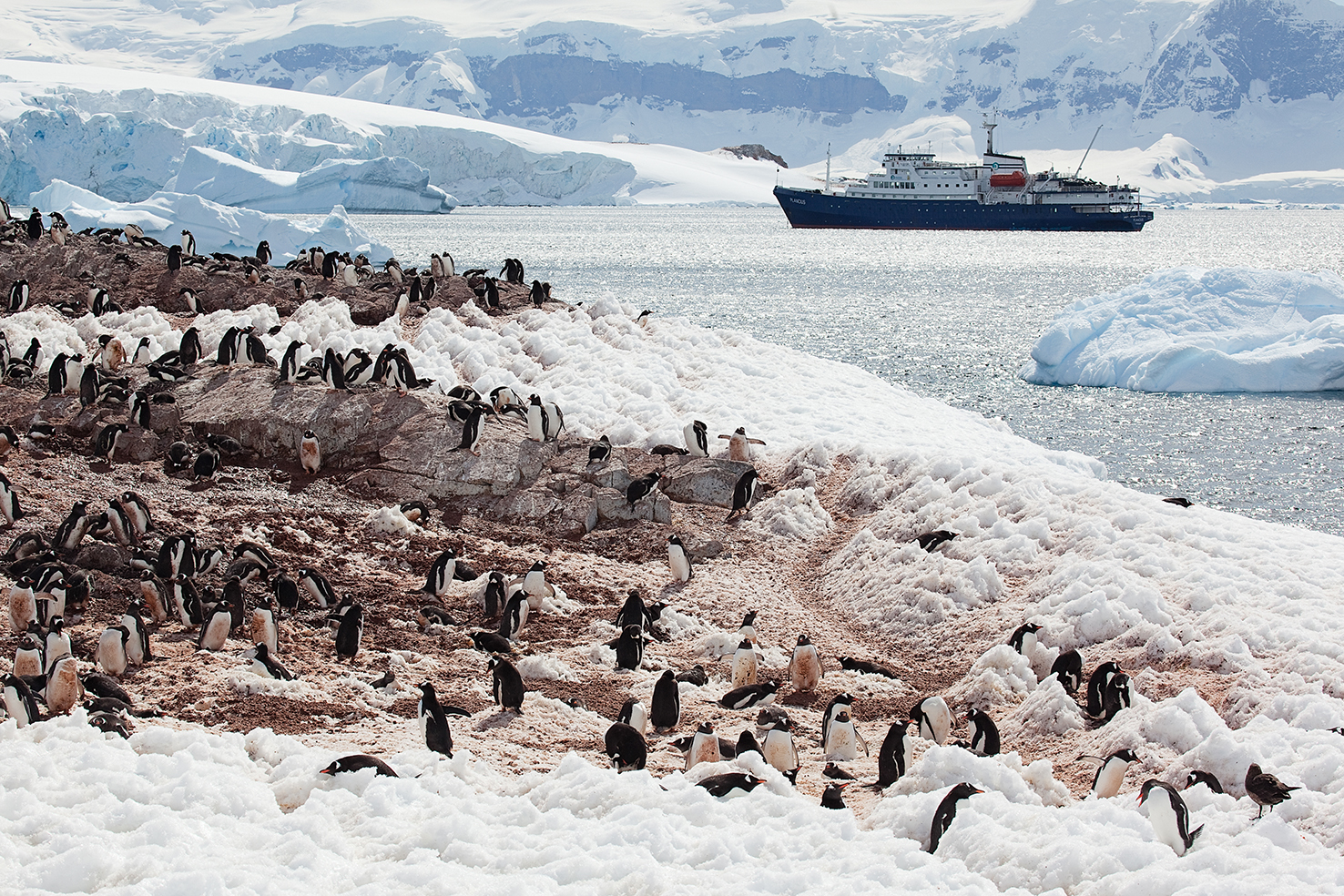 As rough as the Drake is, once you pass the Convergence (where the Atlantic and the Southern oceans meet), the sea and the wind drop to almost nothing. The sky turns to a clear cobalt blue, while the shallows lapping the iceberg fringes give off an exquisite turquoise, and the surface of the ocean is like a mirror. The air becomes warm and life seems to be all plain sailing, as we’re followed south by Pintado petrels in the air and penguins swimming in the wake of the Plancius.

Our first landfall was Aitcho Island, a small speck of granite barely rising above sea level, so named because it was once home to a Hydrographic Office (ie ‘H.O.’) scientific research station. On land, the wind whips up dramatically to more than 100mph and the mercury dips to below minus 30C (with a wind chill making it feel more like minus 70C). At these temperatures, after an hour or two you can snap your own hair, you’re in danger of the fillings falling out of your teeth, icicles form on the end of your nose, and if you’re lucky enough to have a hot drink on you, throw it into the air and you’ll see that before the liquid has the chance to land, it will have turned to ice. For penguin spotters, Aitcho is fantastic because you’ll get a full card of chinstraps, gentoos and Adélies (the only three of the 18 or so species you’ll see in these parts.) Untroubled by the presence of humans, they go about their noisy and smelly business, with the occasional inquisitive gentoo waddling up to you, from time to time to give you a robust peck on the leg. According to official environmental protection guidelines, tourists are not permitted to approach wildlife and must maintain a distance of 5 metres. The penguins, it seems, haven’t read the guidelines. 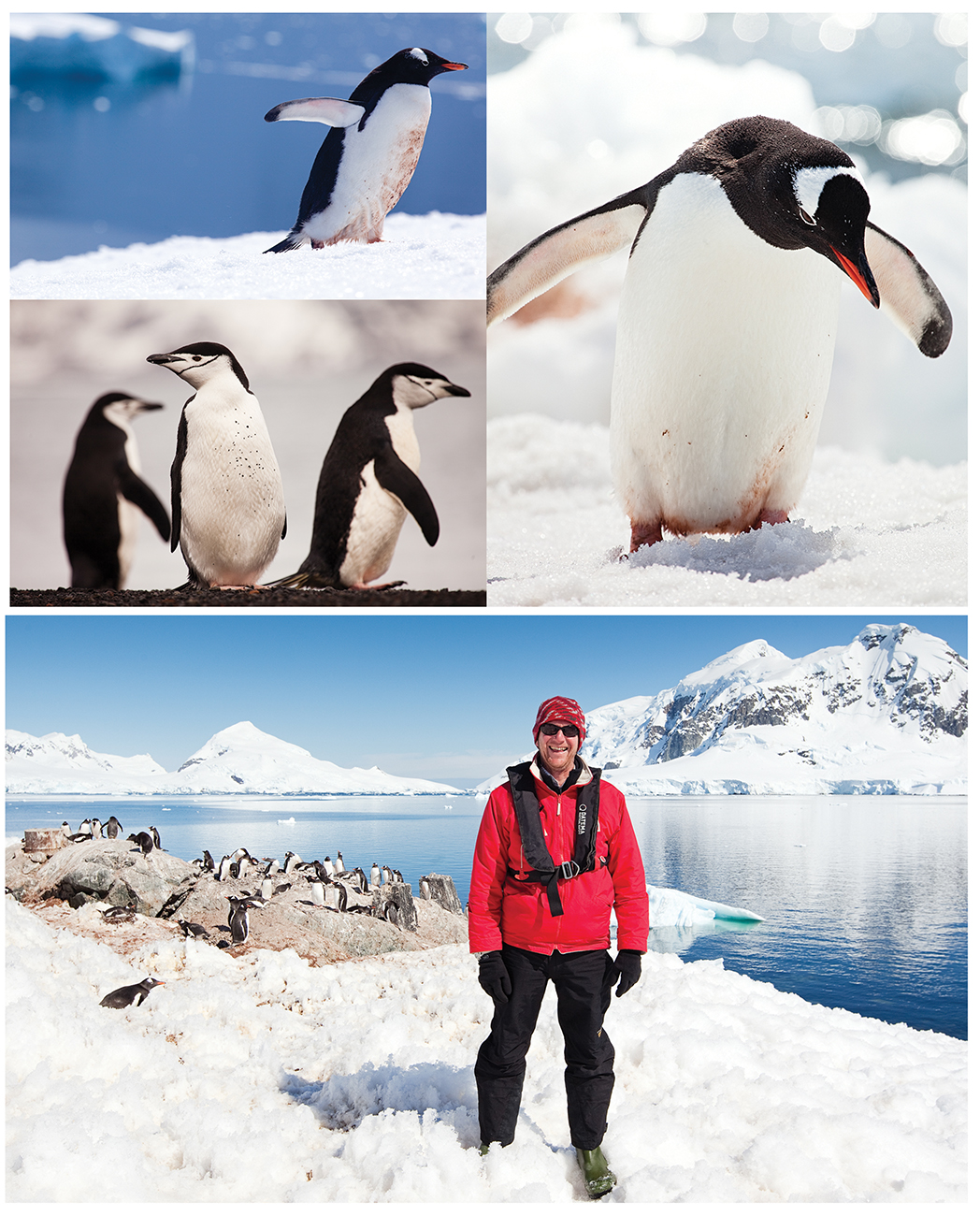 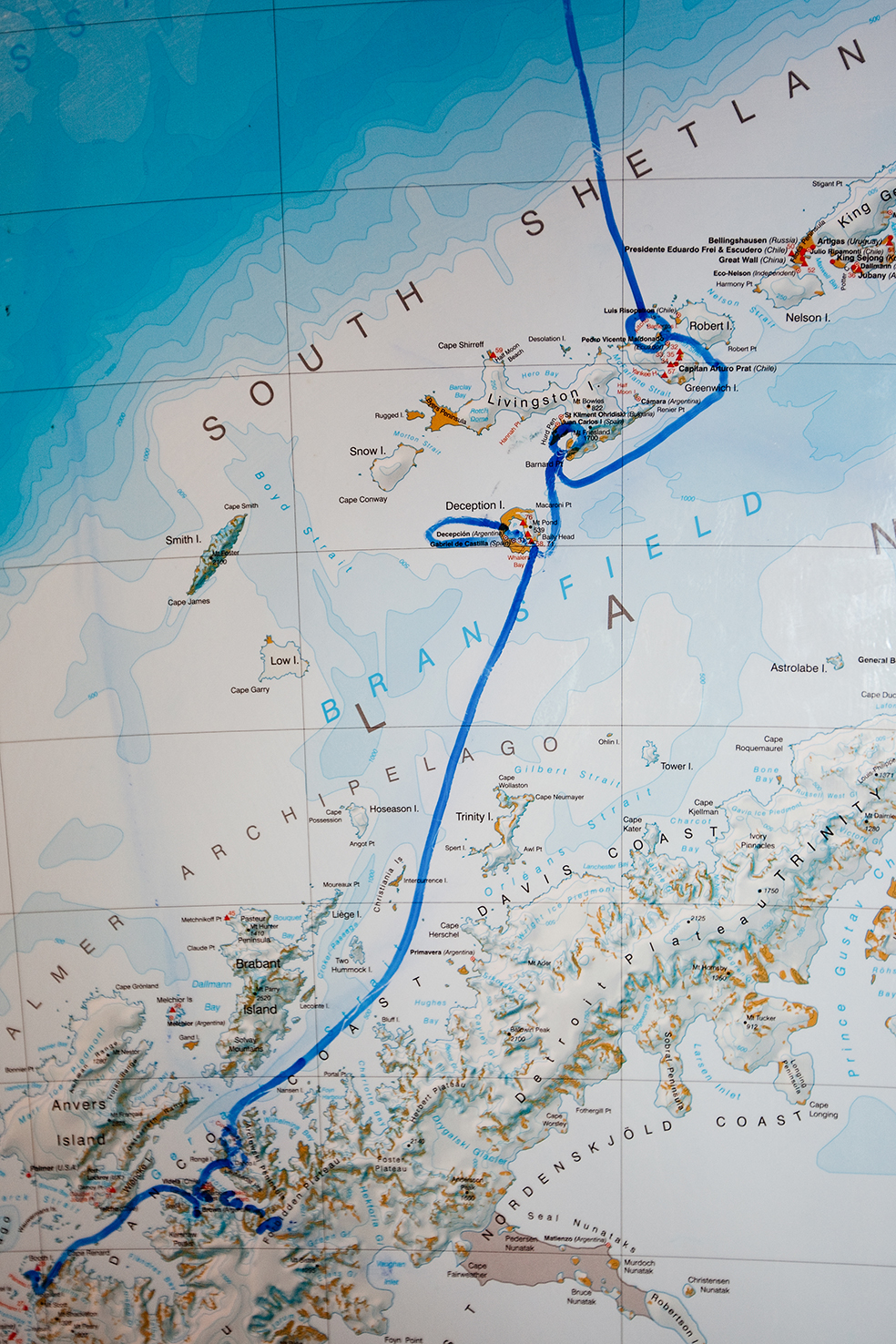 A map of the course taken by Plancius

From Aitcho we cruised around the South Shetlands in a state of constant wonder at the pristine scenery before us. We hiked up mountains, canoed amongst the icebergs and visited the remains of a few beaten up old weather stations. At the disused Argentine science research station Almirante Brown, I finally set foot on continental Antarctica to the amusement of the ever-present gentoos. I’d achieved an ambition that had been with me for decades, ever since I was a schoolboy. But there wasn’t too much time to consider its deeper philosophical meanings, because before long we were back on board the Plancius, making our way to Port Lockroy. It was here that I had my passport stamped at the world’s southernmost post office, and from where I sent a postcard home to Swansea to remind myself of this astonishing adventure of a lifetime. It still hasn’t arrived.

Nick Smith is a fellow of both the Royal Geographical Society and the Explorers Club. His latest book is ‘Travels in Search of a Photograph’.