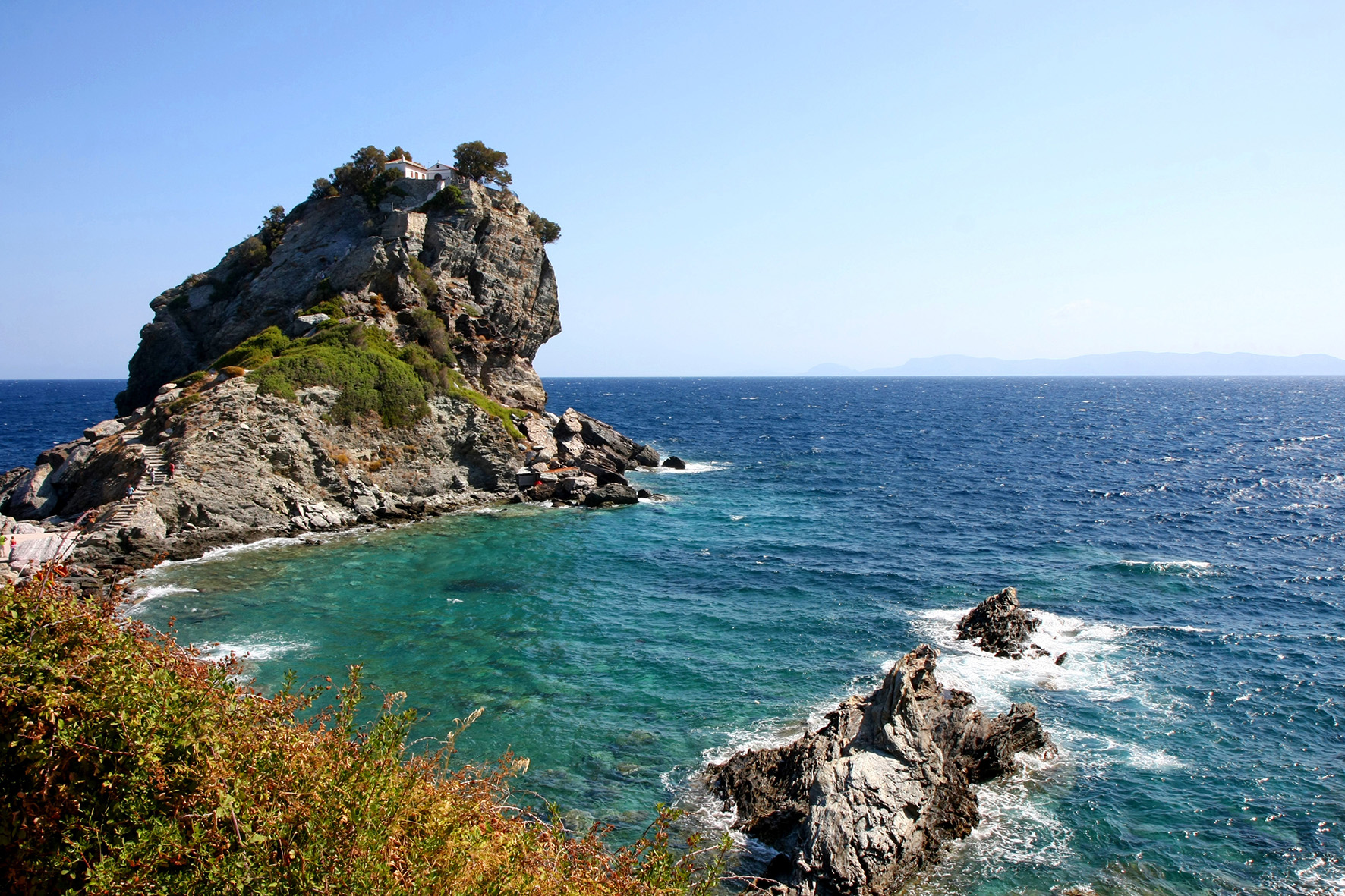 During my stay on the island of Skiathos last summer, I travelled to the nearby islands of Skopelos and Alonissos. The day-long cruise aboard the Agios Nikolas only allowed me a taste of the culture and history that these beautiful islands have to offer. 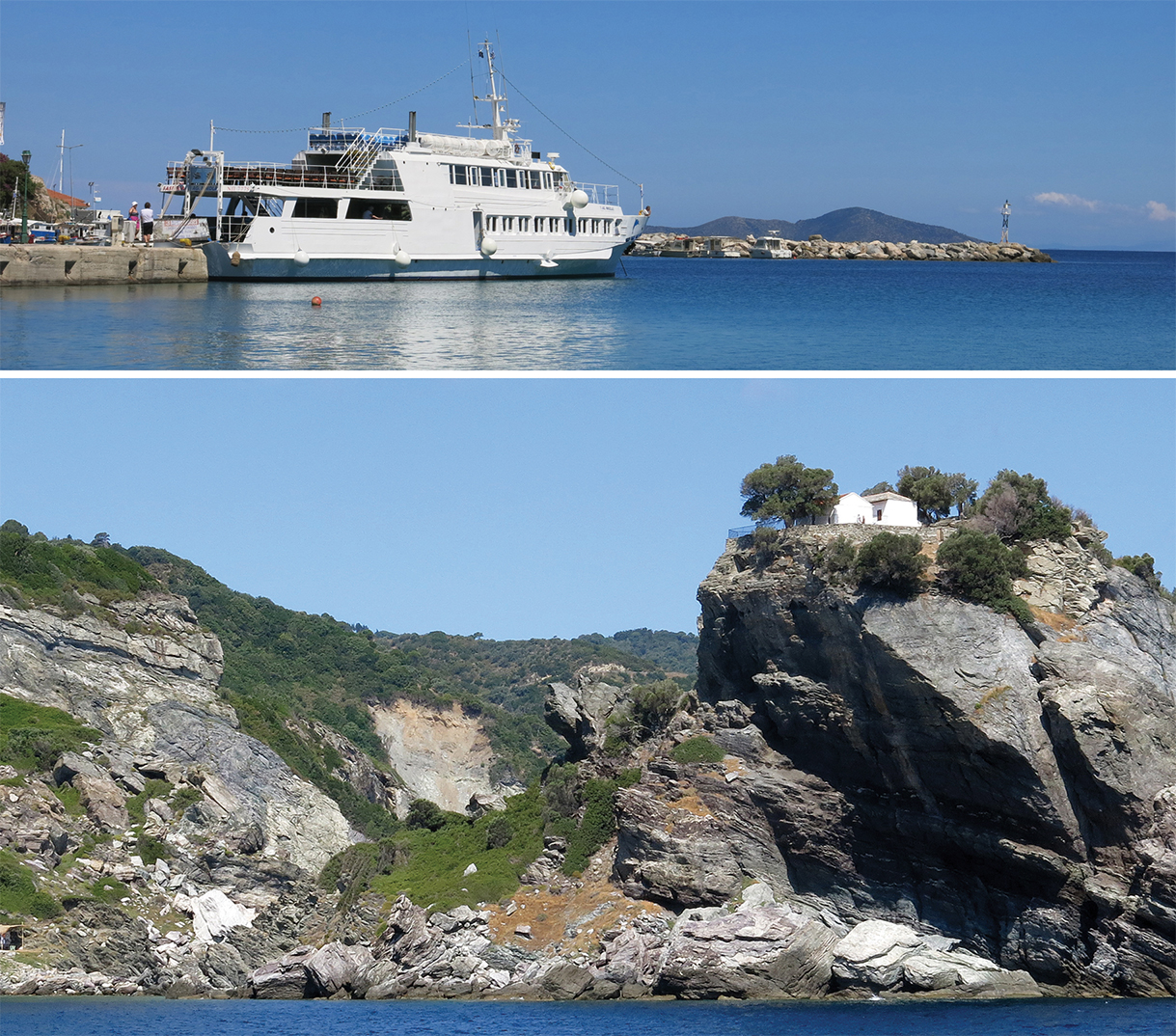 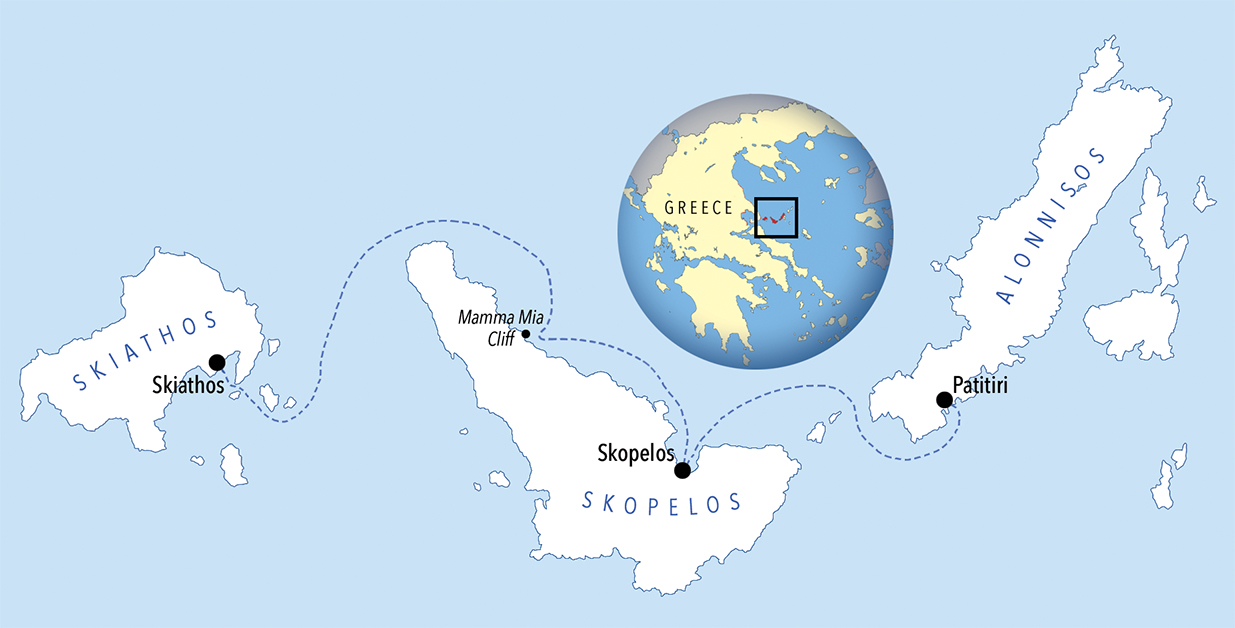 From the boat, I gazed upwards, where towering above me, perched precariously on a rock was the Church of Agios Ioannis Kastri, its facade brilliant white in contrast to the cobalt waters shimmering below. This lovely church became famous as the location of many of the wedding scenes in the film Mamma Mia. Today it is visited by fans who climb the 110 steps carved into the rock to reach it. 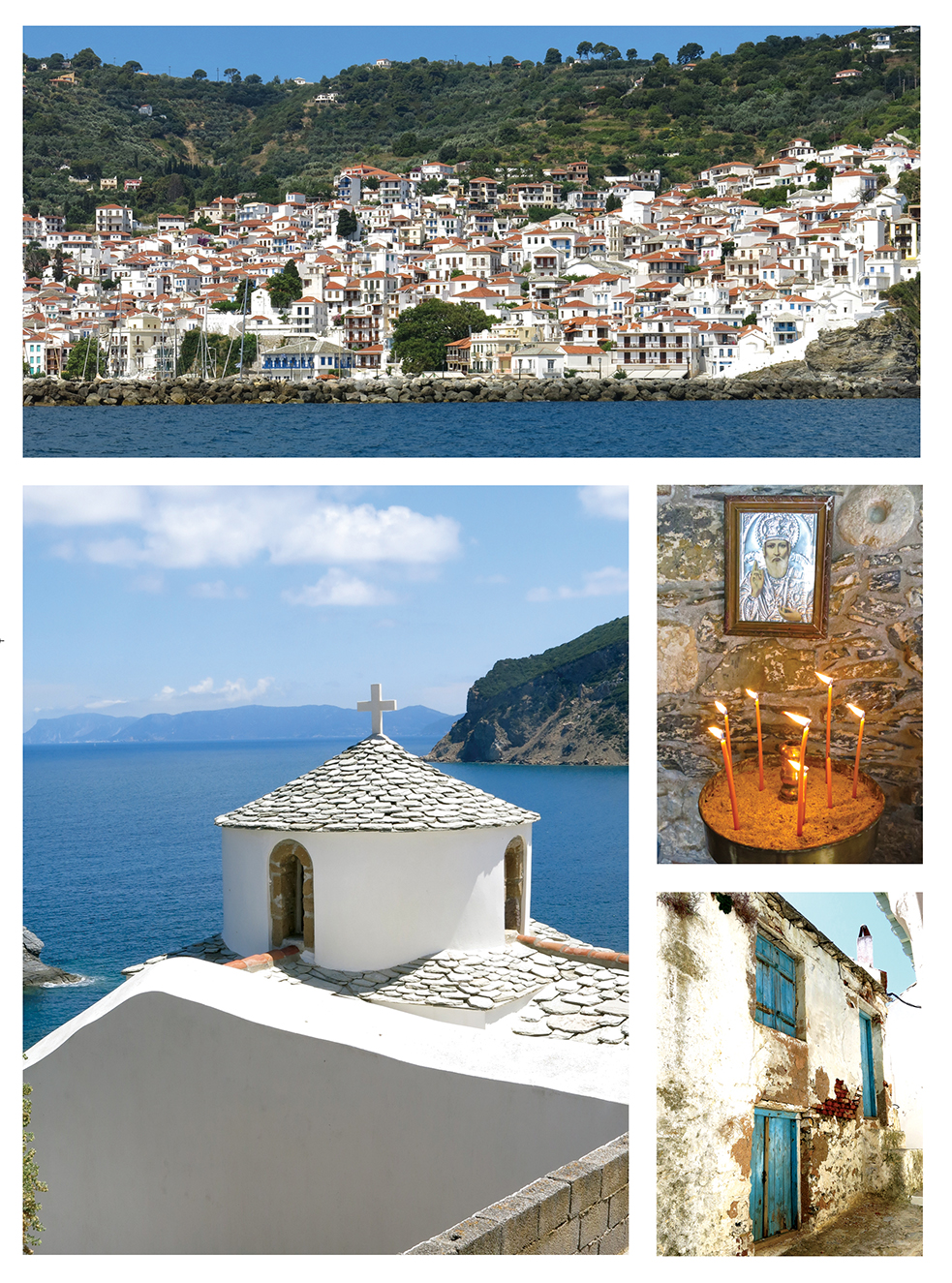 Skopelos is a beautiful island where bleached white cottages appear to tumble down the green hills to the waterfront. The red and blue fishermen’s boats are tethered to stone jetties, obscured by the day’s catch. 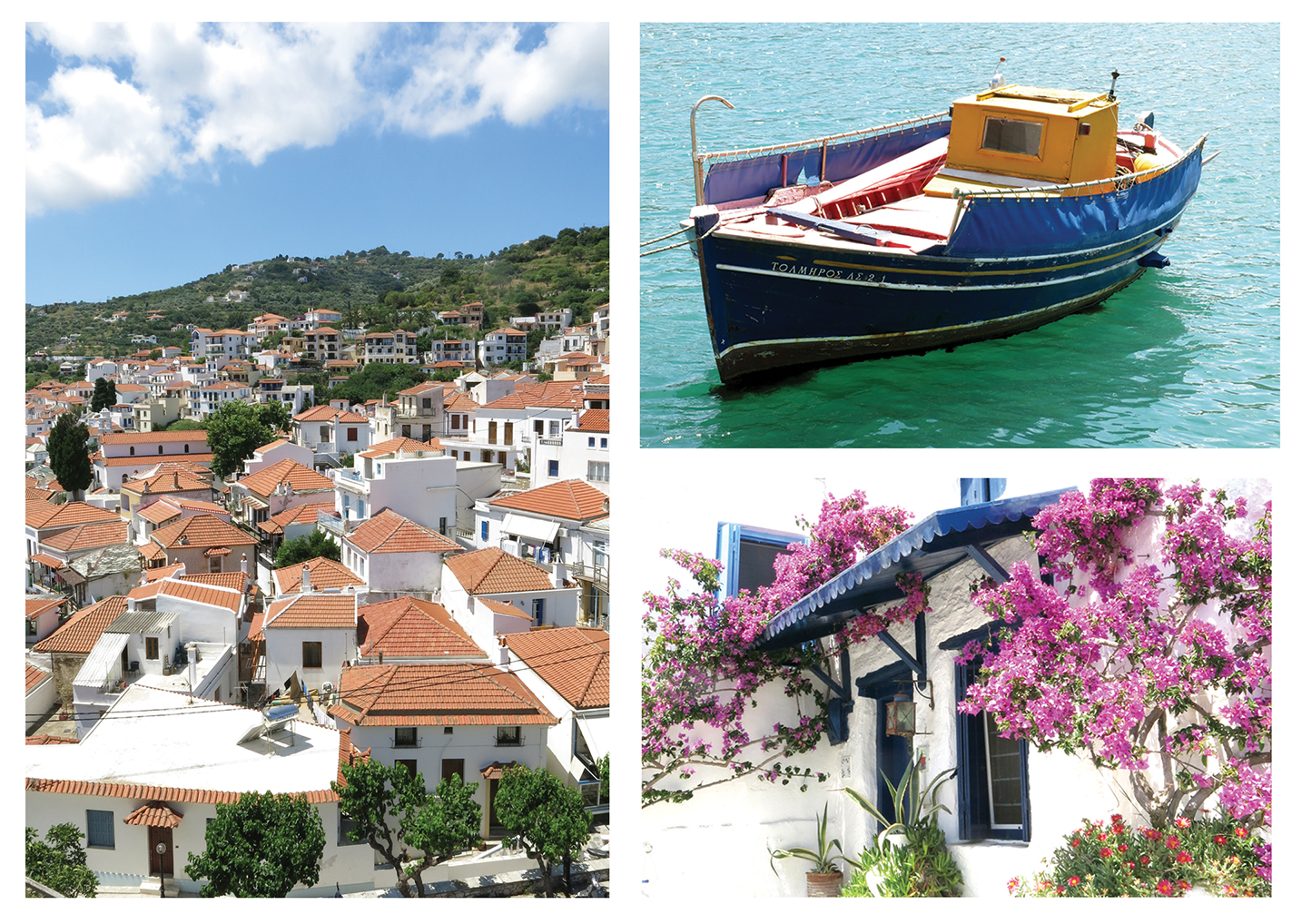 Narrow streets lead upwards through the old quarter of Kastro, past bakeries, gift shops and red tiled houses. Climb the steps  and you are taken into small domed churches, their cool interiors lit by candles whose flickering lights illuminate the ancient icons. There are over 100 of these churches to explore.

Strands of pink bougainvillea cascade over walls and painted doorways. The blue painted wooden tables of  the traditional family run tavernas look inviting, but unfortunately not for me as my two hours ashore were up and the boat was waiting to sail on to Alonissos. 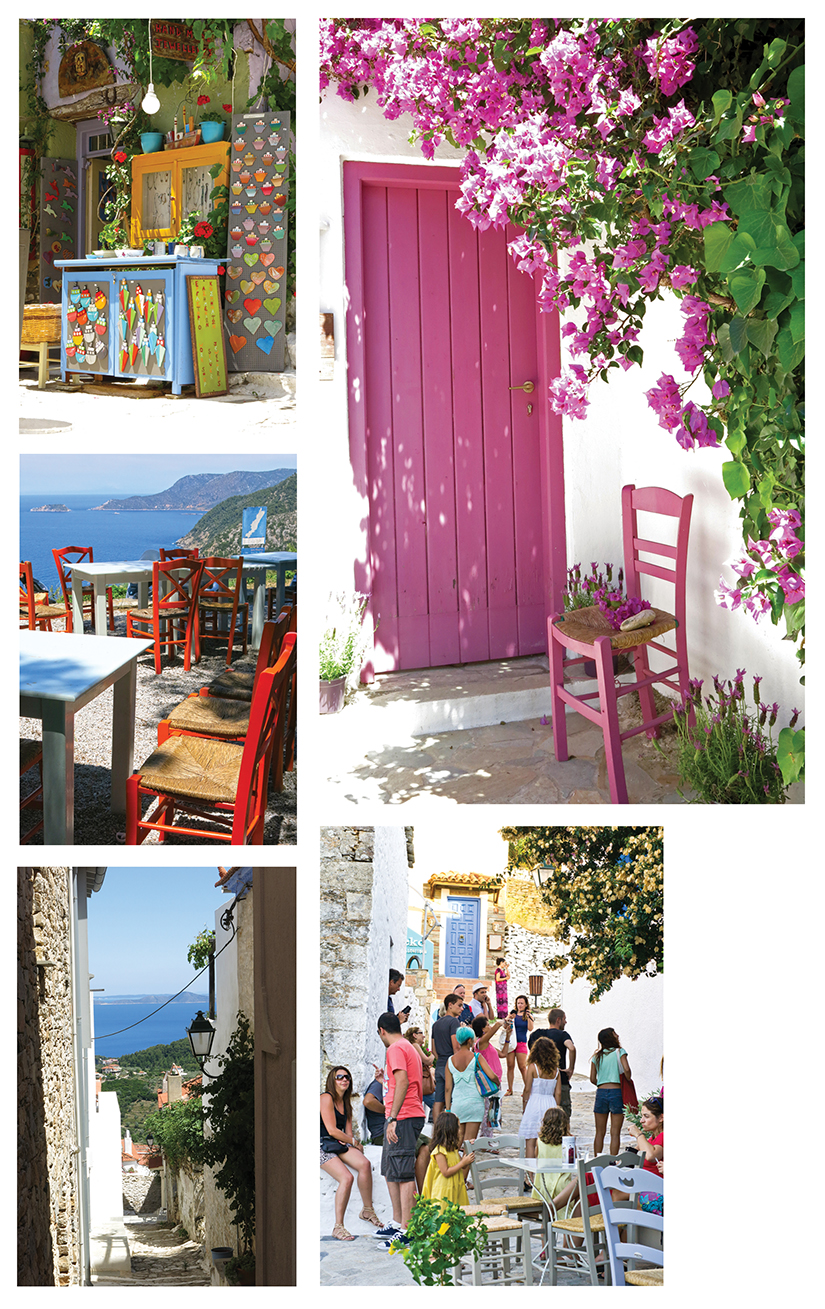 The island of Alonissos is half covered with virgin pine forest. The air is perfumed with  wild herbs, sage, thyme and oregano, and the hillside is crisscrossed by vines and groves of olive and fruit trees. It is known for its natural beauty and coast line of secret coves.

Patitiri is the island’s main port; along the quayside are a handful of tavernas above a small beach. The harbour used to be lined with wine presses – ‘patitiri’ translates as wine press.

The hilltop village of Chora, was until 1965 the island’s capital.  After an  earthquake struck and damaged the dwellings, the villagers were forced to abandon their homes and move down to Patitiri.

Today the narrow streets have been paved, derelict house’s rebuilt, old buildings transformed into galleries and craft shops. Small squares have cosy cafes and traditional taverna’s which open during the summer months so that visitors can, relax and take in the incredible views of the whole island.

All too soon it was time for me to leave the picturesque islands of Skopelos and Alonissos behind and board the Agios Nikolas to return to Skiathos. On a future trip I will spend days not hours discovering these island’s secrets.

Just as I thought the day couldn’t have been any better, my eyes caught a movement on the water.Two dolphins rose out of the sea, their sleek grey bodies glinting in the afternoon sun as we sailed through the National Marine Park of Alonissos and Northern Sporades.

Travel to Skiathos by Thomas Cook

Flights from Bristol to Skiathos

Thanks to Bristol Airport for parking www.bristolairport.com