We share the air we breathe with all other living organisms on the planet. The air connects and unites us in a dynamic cycle, with plants drawing in carbon dioxide and giving out oxygen upon which we depend.

Respiration is defined as the movement of oxygen from the outside air to the cells within the body and the transport of carbon dioxide in the opposite direction. Each body cell needs oxygen to provide energy for every action and reaction, be it great or microscopic. We are so reliant on this energy that without a continuous supply of oxygen, even for a few minutes, we cannot exist. 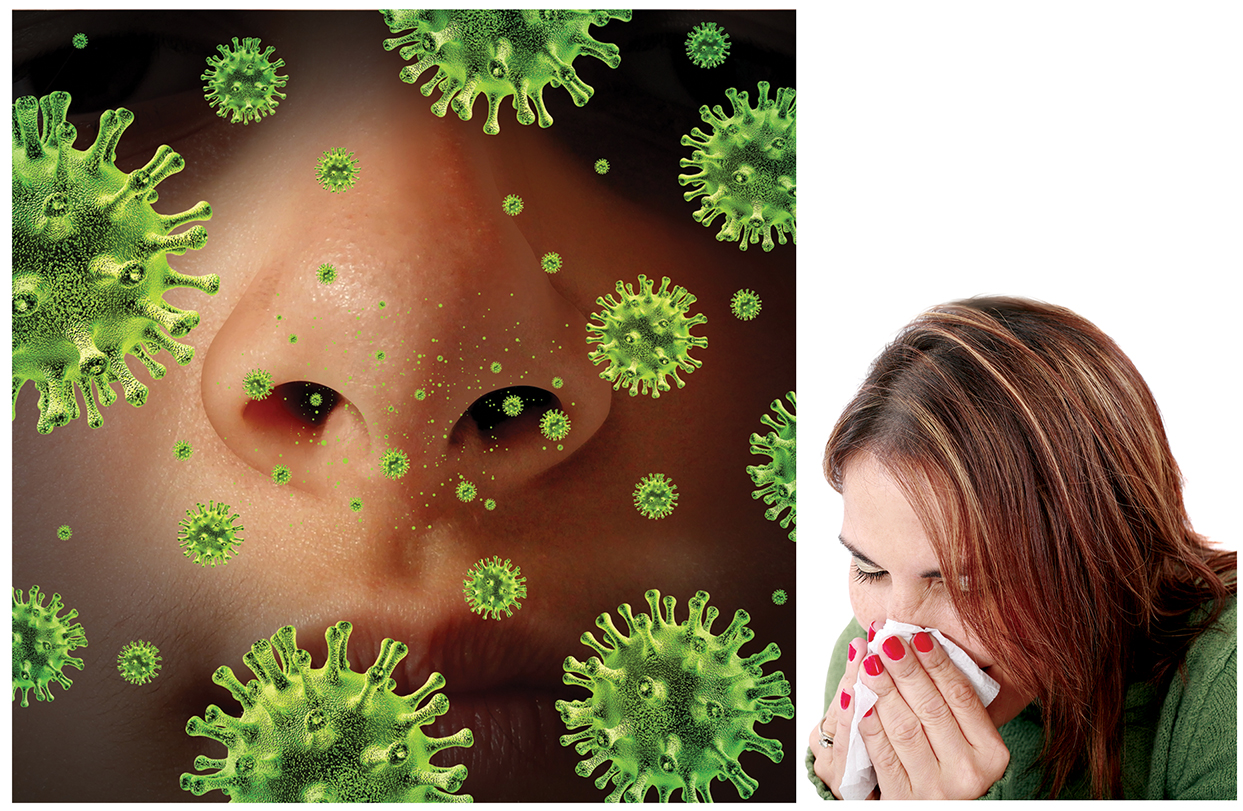 Breathing is generally a subconscious process; an adult will take between 17,000- 30,000 breaths per day, few of which are performed with any awareness. The quality of the breaths we take has a big impact on our health, particularly on the nervous system. Diaphragmatic breathing is a natural breath which causes the abdomen to swell on an inhale, drawing air into the lower section of the lungs. It interrupts the fight or flight stress response, inducing a state of relaxation and improving oxygen exchange. Poor breathing habits cause decreased blood oxygen levels and increased carbon dioxide resulting in raised heart rate and blood pressure, lowered energy levels, headaches and high anxiety.

In this three part series, we’ll take a look at what prevents the respiratory system from working at its peak and how we can restore deep, nourishing and energising breathing to our lives.

At this time of year upper respiratory tract infections are common, with rhinoviruses multiplying rapidly in the cold conditions. It is not a bad thing to have a cold once or twice a year, giving us a chance to clear out toxins and unhelpful bacteria from the body. By taking herbal medicines we can support the body and ensure the pathogen is expelled effectively. 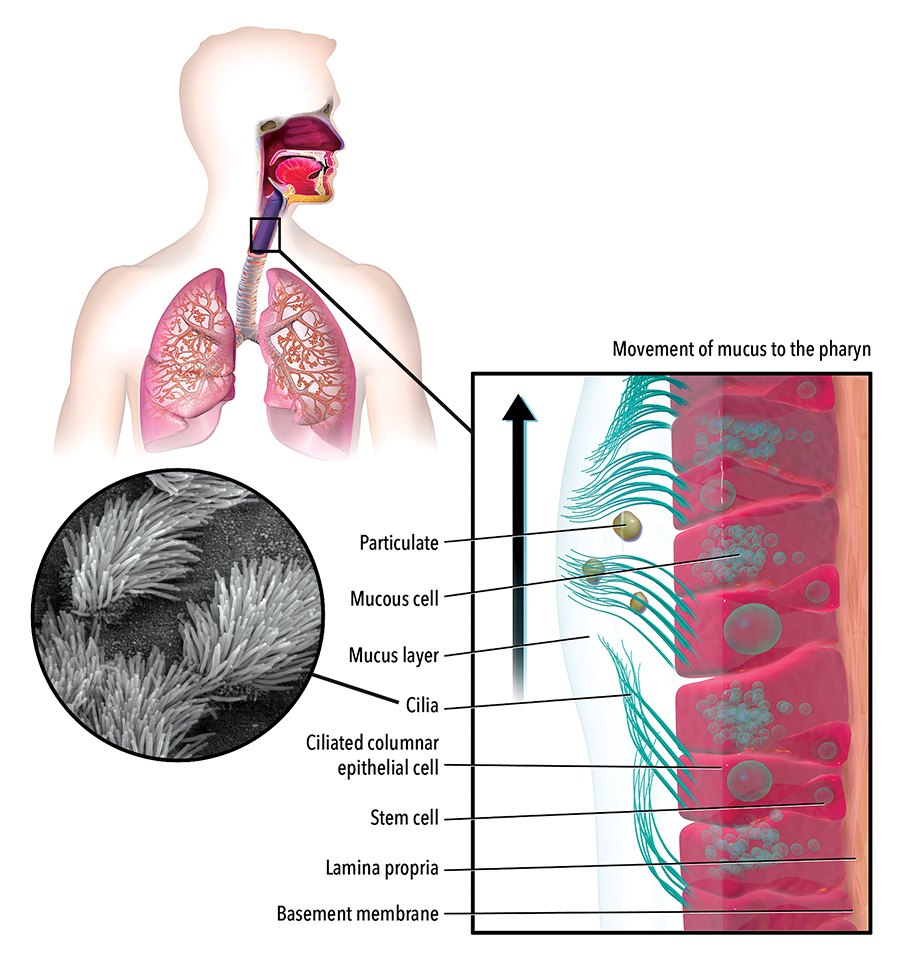 It is not a bad thing to have a cold once or twice a year, giving us a chance to clear out toxins and unhelpful bacteria.

The respiratory mucous membrane or ‘mucosa’ forms the first line of defence against air borne diseases caused by pathogenic microbes. It provides an impermeable barrier of tight junction cells with a layer of mucus on top, which acts as another barricade. Mucus itself has a complex make-up containing over 200 different proteins, including antimicrobial substances, with mucin forming the bulk of the slippery mass. On its surface is a lining of tiny hairs known as cilia. These move in a wave like motion transporting around 90% of inhaled particles (including respiratory viruses), which are trapped in mucus, from the passages in the lungs to the upper airway for removal. This system is known as the ‘mucociliary escalator.’ Any sign of a virus and the respiratory mucosa can also trigger the production of anti-viral substances and attract immune cells to the area.

The Virus Strikes Back

As is to be expected, in their bid for survival, viruses have adapted mechanisms to penetrate through the mucosa and avoid the initial immune attack. Once they enter their unconsenting host they stay long enough to reproduce and then, during a bout of coughing or sneezing, be transferred to their next victim. Fortunately, in most cases the body mounts an effective attack and the virus is cleared with few serious complications.

One of the more troubling aspects of viral respiratory tract infection is the effect it can have on the action of the cilia. The virus can disrupt the ciliary movement and damage ciliated cells, resulting in mucus becoming stagnant and stuck in the lungs and airways. This can have potentially serious effects as it encourages bacterial colonisation; it is often bacteria, such as s. pneumonia, which cause significant complications and illness following viral infection, rather than the virus itself 1. In the same way, cough medicines which inhibit the cough reflex may seem to provide relief, but can lead to longer duration of infection with increased complications.

Cough medicines which inhibit the cough reflex may seem to provide relief, but can lead to longer duration of infection with increased complications.

Herbal medicines are invaluable to increase the chance of uncomplicated illness. In our herbal treasure chest we have herbs which increase the action of the mucociliary escalator – increasing the expulsion of mucus. Herbs with antiviral and antibacterial activity give that extra edge over the undesirable organisms, as well as herbs that soothe and heal inflamed surfaces that have been damaged in the cross fire. Make that little extra effort to prepare yourself – arm yourself with herbal artillery and be ready to rise victorious!

Respiratory A B C’s

So how do we support the body to ensure that removal of the uninvited guest is relatively swift and serious complications are averted? A key concept here is to work with the body and not against it. Medical herbalists take into account dosage, herbal combinations and individual constitution in prescriptions, but to start you off here are the A B C’s of respiratory infection.

Pay attention to your body’s signals – there is usually an initial sign of infection so that you can take action right at the outset.

Rest and wrap up warmly (particularly if you are feeling chilly)

Strengthen the immune response with herbs such as elderberry, echinacea and liquorice.

Treat the symptoms as they arise. For coughs2 Dry irritating, non-productive cough: Soothe membranes and nerve endings with mucilaginous herbs such as plantain and marshmallow root. Where necessary, encourage the production and removal of mucus.

For excessive mucus production blocking airways: Use expectorant herbs to ensure the mucus is removed effectively such as thyme and black pepper. Some drying herbs may be used if mucus is excessive.