During late winter, most insects are conspicuous by their absence. But they are only temporarily hidden away, biding their time until the arrival of spring, when rising temperatures and renewed plant growth will allow them to go about their business once more. For young solitary wasps, becoming active in spring will be a novel and demanding experience, as it will be their first time venturing out from the safety of their nurseries to explore the outside world as an adult. 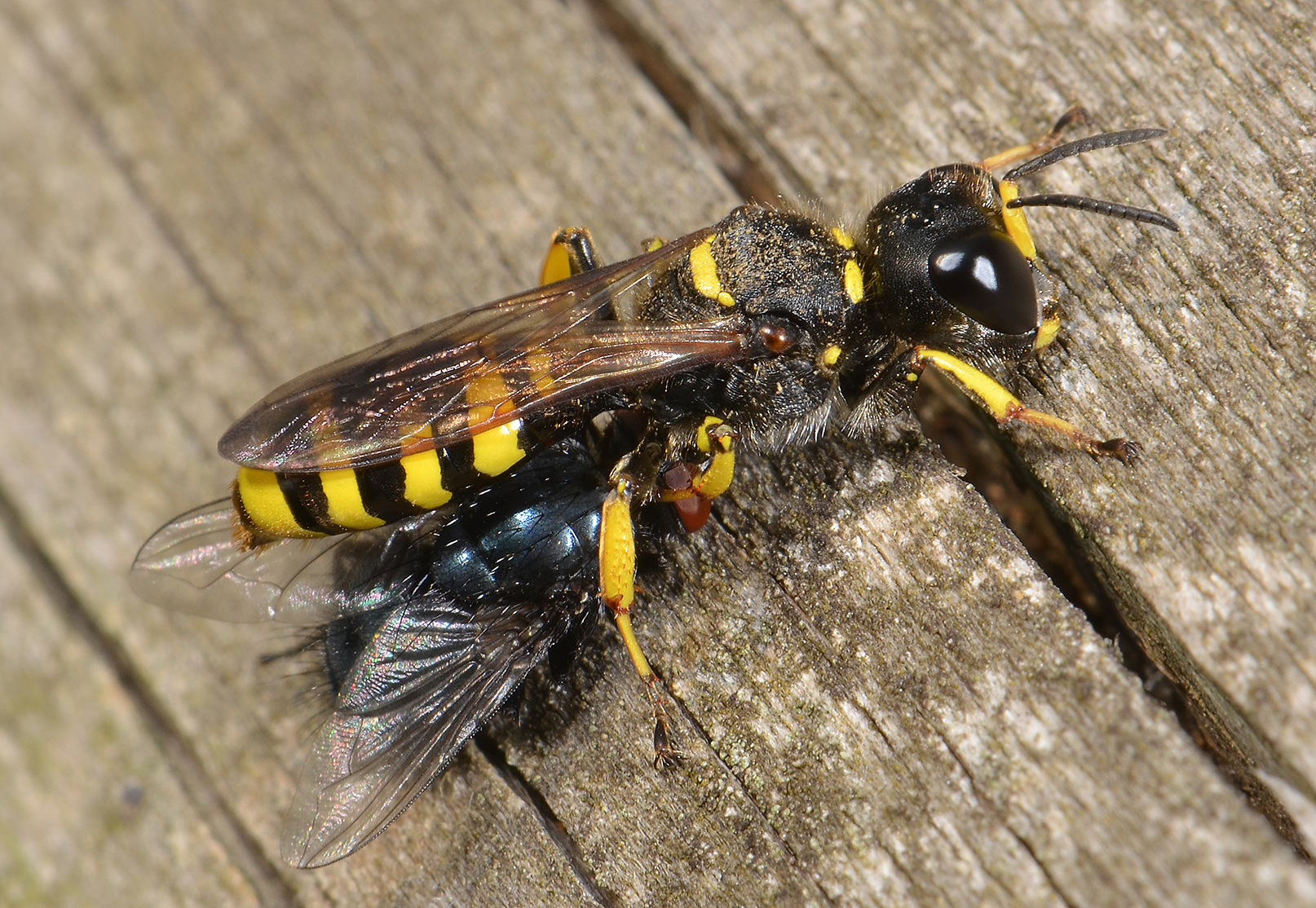 Solitary wasps spend the majority of their lives in secure cells constructed for them by their mothers, frequently deep underground, where they feed on supplies provided by their diligent parent. In contrast to the more familiar social wasps which regularly feed their young in the nest as they grow, solitary wasps generally provide all the food required for a larva to develop to adulthood up front. Like social wasp larvae, solitary wasp larvae need insect (or other invertebrate) protein to thrive. This means that female solitary wasps – the males play no part in providing for their young – have to be expert hunters to ensure the survival of their offspring. 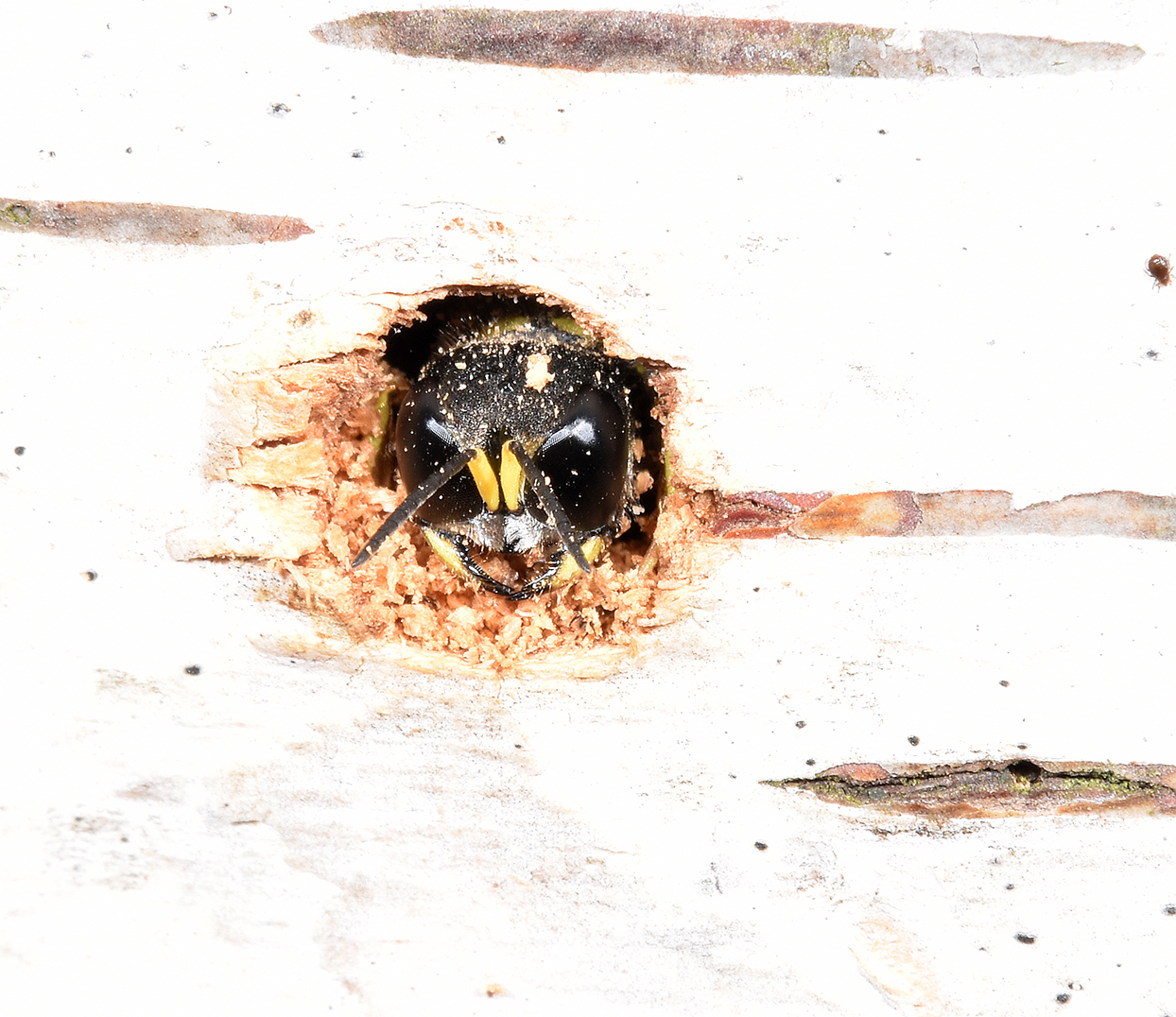 There are considerably more solitary wasp species in Britain than there are social wasps, and this is reflected in the wide variety of their appearance as well as their habits. Some closely resemble the familiar social wasps, such as the large-eyed members of the genus Ectemnius, which hunt flies and hoverflies for their larvae (photo 1). Like other solitary wasps, they incapacitate their prey with a venomous sting which quickly paralyses but does not kill it. By remaining alive the hapless victim does not spoil inside the larval cell while the initially small wasp larva slowly feeds on it. Some species in the genus Ectemnius burrow into soft wood instead of sandy soil, for example Ectemnius cephalotes (photo 2), the Big-headed Digger Wasp, which can be attracted into gardens by providing them with decaying logs to build their nests.Solitary wasps are not aggressive around their nests and only sting when they perceive themselves to be in extreme danger (for example when roughly handled), so they are quite safe to have around. 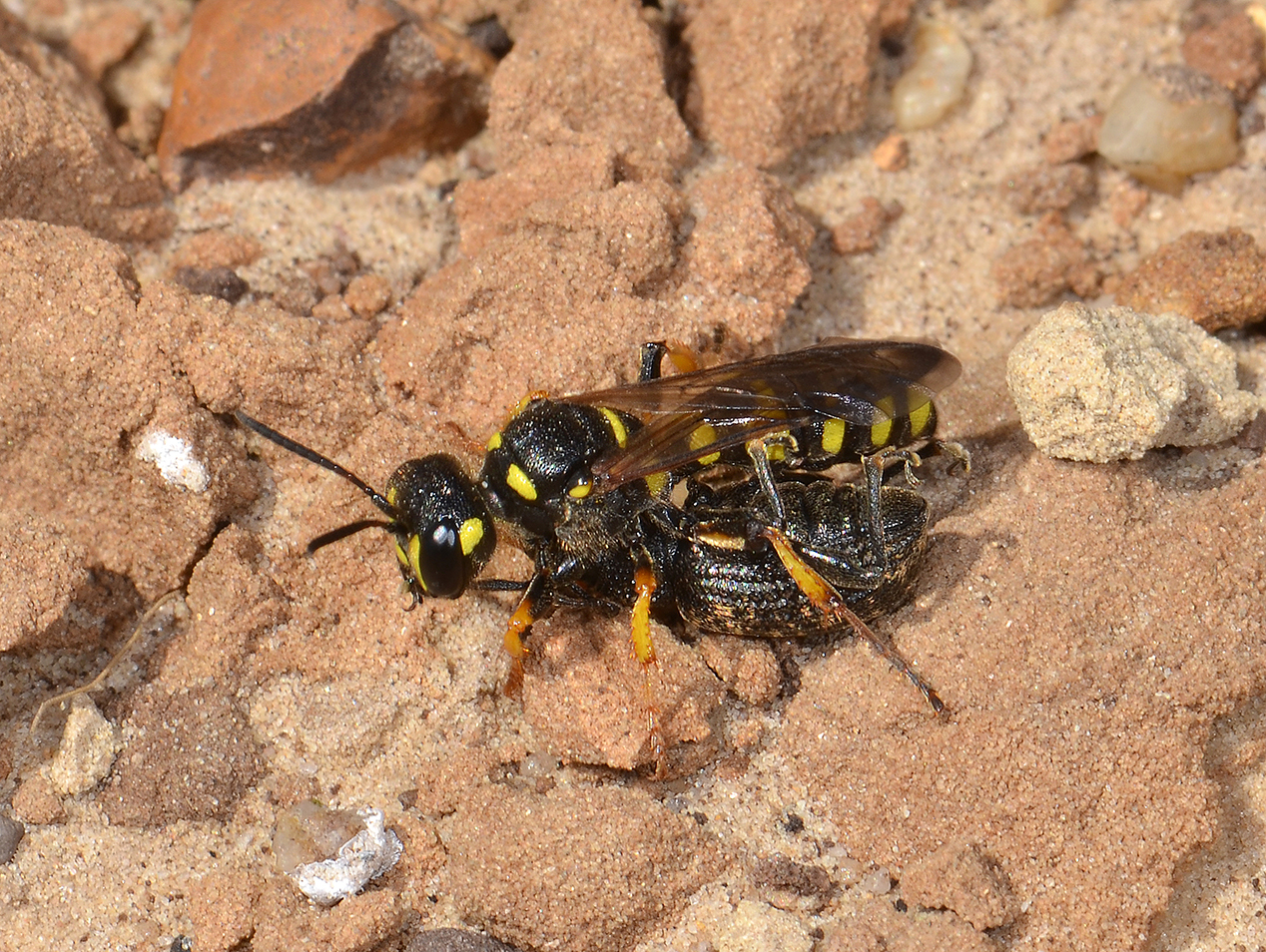 Indeed some, for example the Sand Tailed Digger Wasp Cerceris arenaria (photo 3), can be useful to gardeners because they collect potential pest species, in this case weevils, to stock their nests. Each wasp larva requires between 3 and 14 weevils (depending 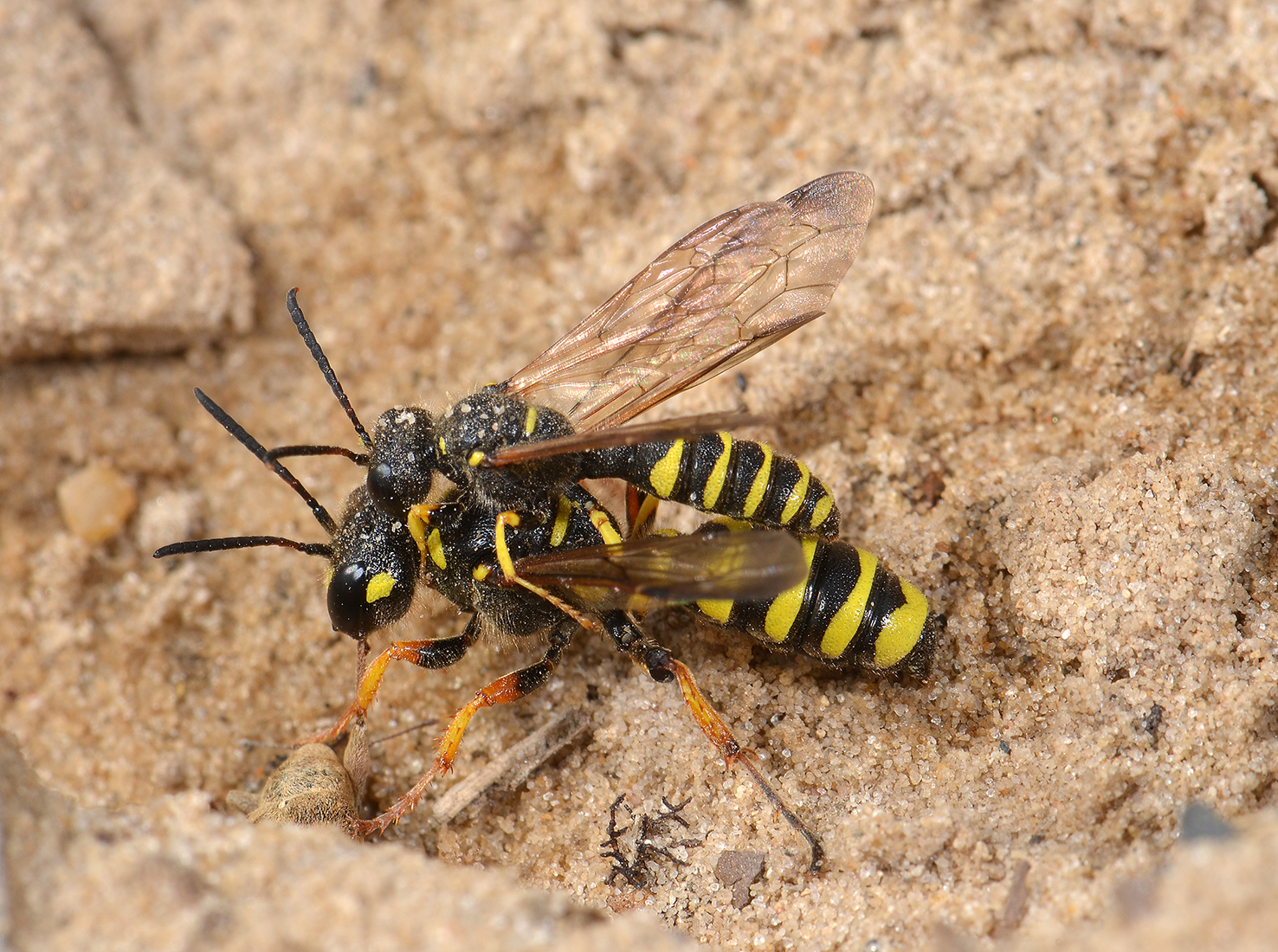 on the size of weevil and the gender of the wasp larva – with the larvae developing into the larger females requiring more food than the males (photo 4)), so quite considerable numbers of weevils are collected by each adult female during a season. 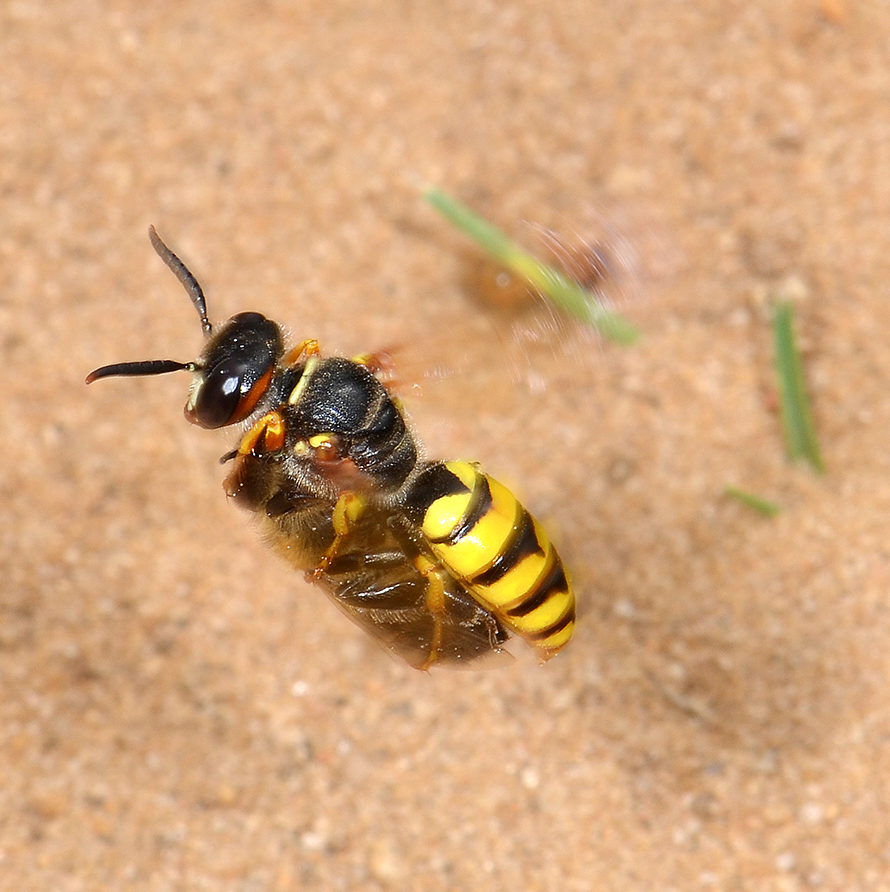 Probably the only species which ever makes itself unpopular with humans is the Bee-wolf (Philanthus triangulum), which relies on Honey Bees as its larval food item, and in some parts of Europe occasionally occurs in sufficiently large populations to locally affect Honey Bee numbers. Bee-wolves are a fascinating species. Once they have spotted a potential victim they hover near it carefully, confirming its suitability by smell before suddenly pouncing with lightning speed and immediately paralysing it with a sting. Next, they remove the nectar the bee has collected from the bee’s crop by squeezing the bee’s abdomen and licking up the sweet liquid as it emerges from the bee’s mouth, before carrying the bee back to their burrow. Photo 5 shows a flying Bee-wolf carrying its newly captured prey. Back at the nest, which can be up to 1 metre deep and can contain as many as 30 cells, the female Bee-wolf cleans the bee meticulously and covers it in special secretions to delay mould growth on the surface of the bee which would otherwise form very quickly in the warm and humid atmosphere of the burrow. Each Bee-wolf larva requires between three and five Honey Bees for its development. 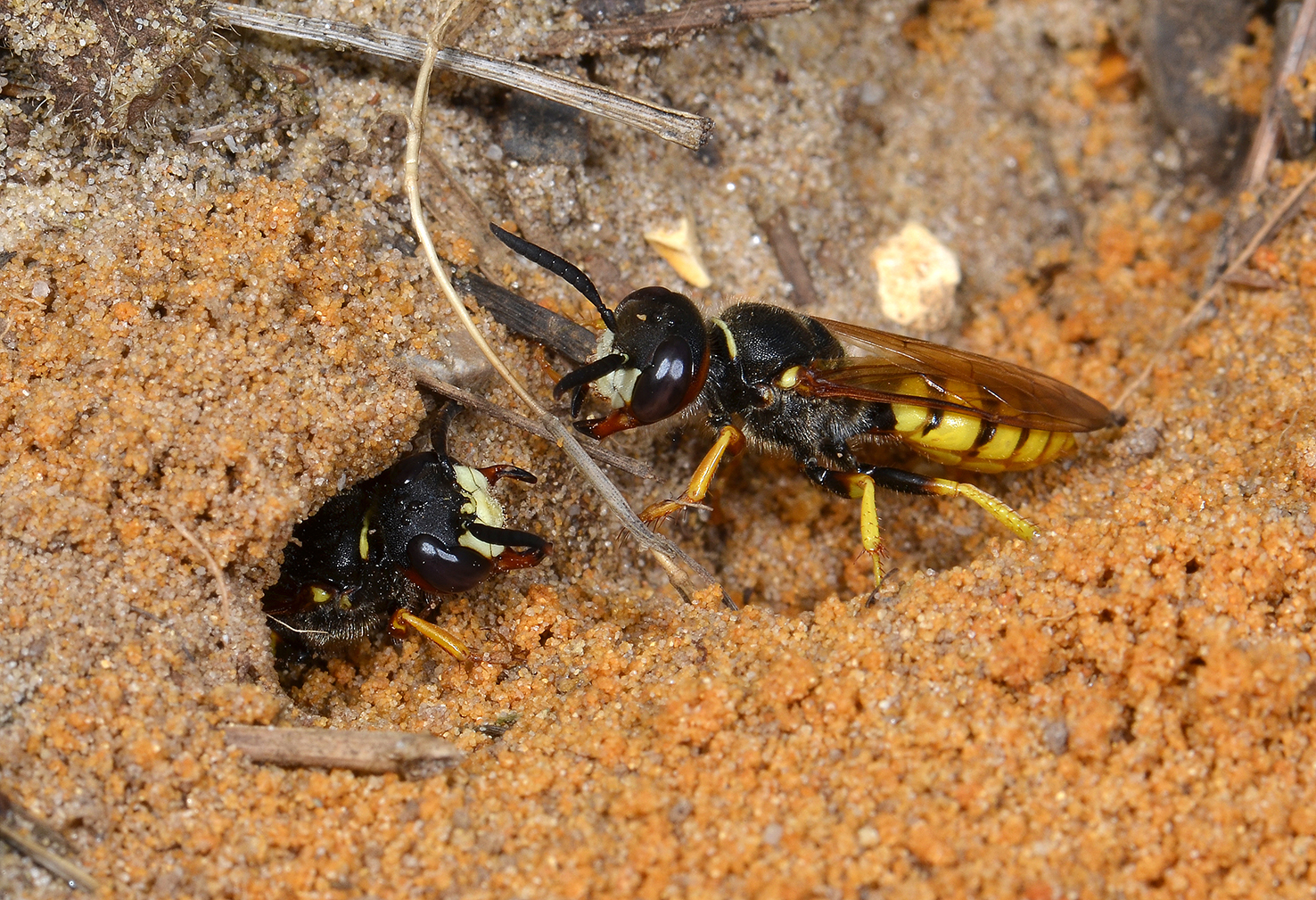 Photo 6 – Female Bee-wolf defending her burrow against another female

Nest building and provisioning are hard work for the mother wasps and as a result takeovers of burrows, theft of prey items and even sneaking an egg into a fully stocked cell of another female of the same species while eating hers are common occurrences among many solitary wasps. Not all females are as lucky as the female Bee-wolf in photo 6 who was in her burrow when the would-be intruder arrived and was able to successfully defend her nest. 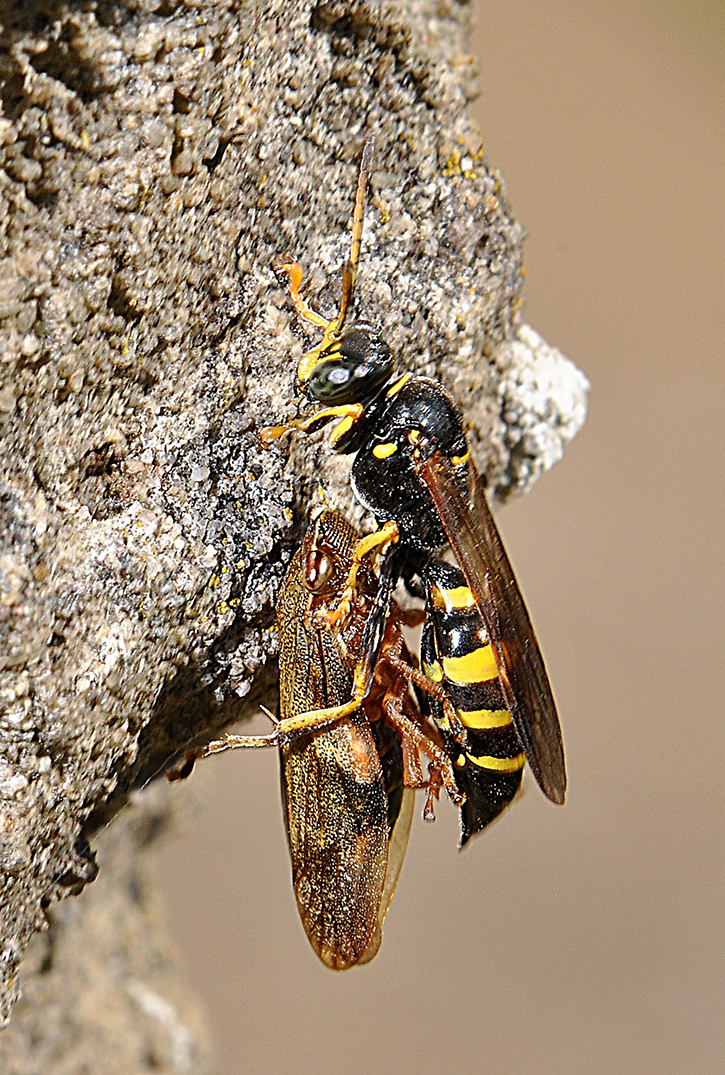 Most species of solitary wasp, though not quite as particular as the Bee-wolf, still only utilize a few closely related prey species each. Due to the large number of different solitary wasp species, however, hardly any insect is safe from potentially becoming stock in a solitary wasp’s living larder. Froghoppers, for example, are pursued by Gorytes laticinctus (photo 7), juvenile shieldbugs are preyed on by Astata boops (photo 8) and sawfly larvae as well as caterpillars are the larval food source of both British species of the elegant, slender genus Ammophila, the sand wasps. 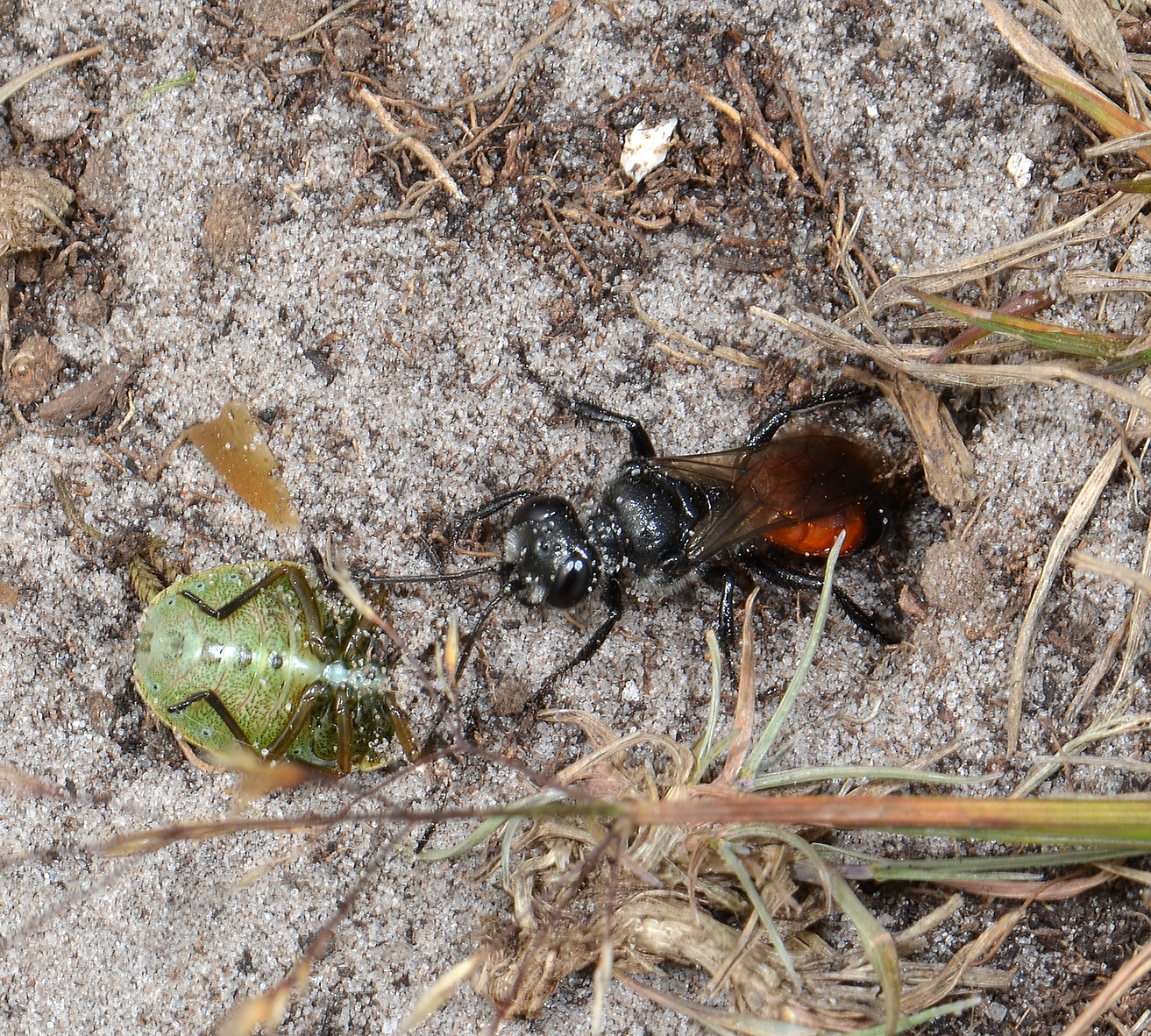 Photo 8 – Astata boops with shieldbug nymph prey, making her way back to her nest 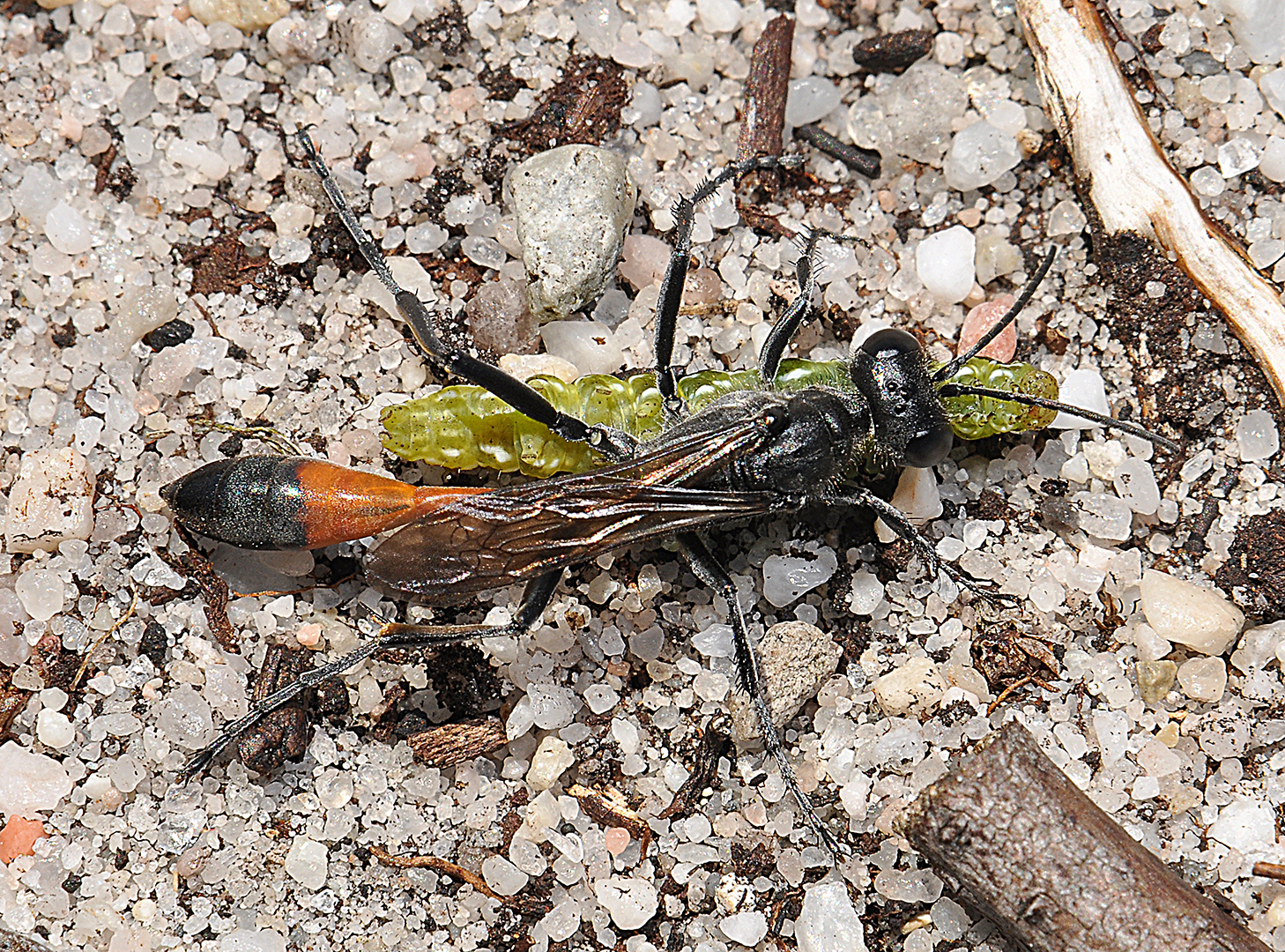 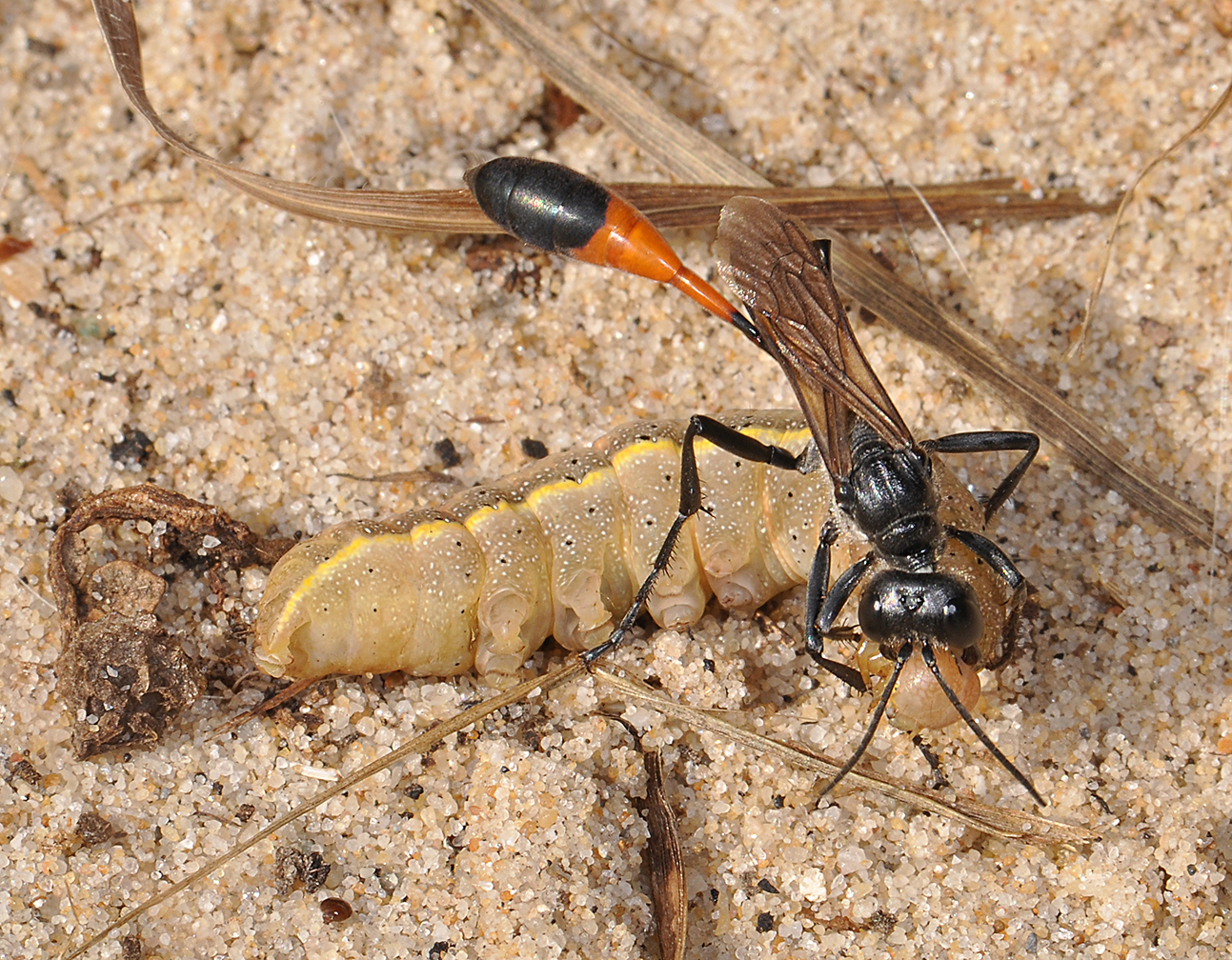 The rarer Heath Sand Wasp, Ammophila pubescens (photo 9) only occurs in Southern England, but the equally graceful Red-banded Sand Wasp Ammophila sabulosa (photo 10) has a wider range which includes the Gower coast, where it is most frequently seen in the dunes at Whiteford, Port Eynon and Oxwich.

Even the tiny, long-suffering aphids which already have more than their fair share of predators (not to mention the attacks they have to withstand from gardeners) do not get a break. They are preyed upon by the equally minute (<5 mm) Stigmus solskyi (photo 11) which collects up to 25 aphids for each of its nest cells, which it usually builds in holes left by wood-boring beetles, including woodworm holes in timbers. 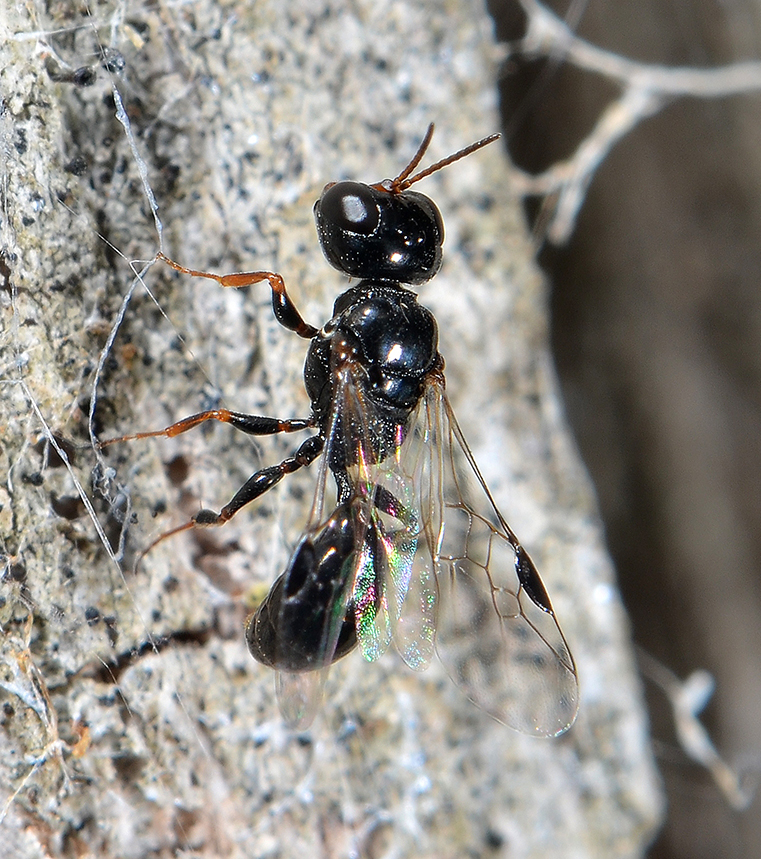 Being a fearsome predator in one’s own right (in addition to not even being an insect) does not guarantee protection from a potentially gruesome end either. The Black-banded Spider Wasp (Anoplius viaticus) (photo 12) is one of the 41 species of British spider-hunting wasps of the family Pompilidae, all of which regularlyachieve the seemingly impossible by hunting 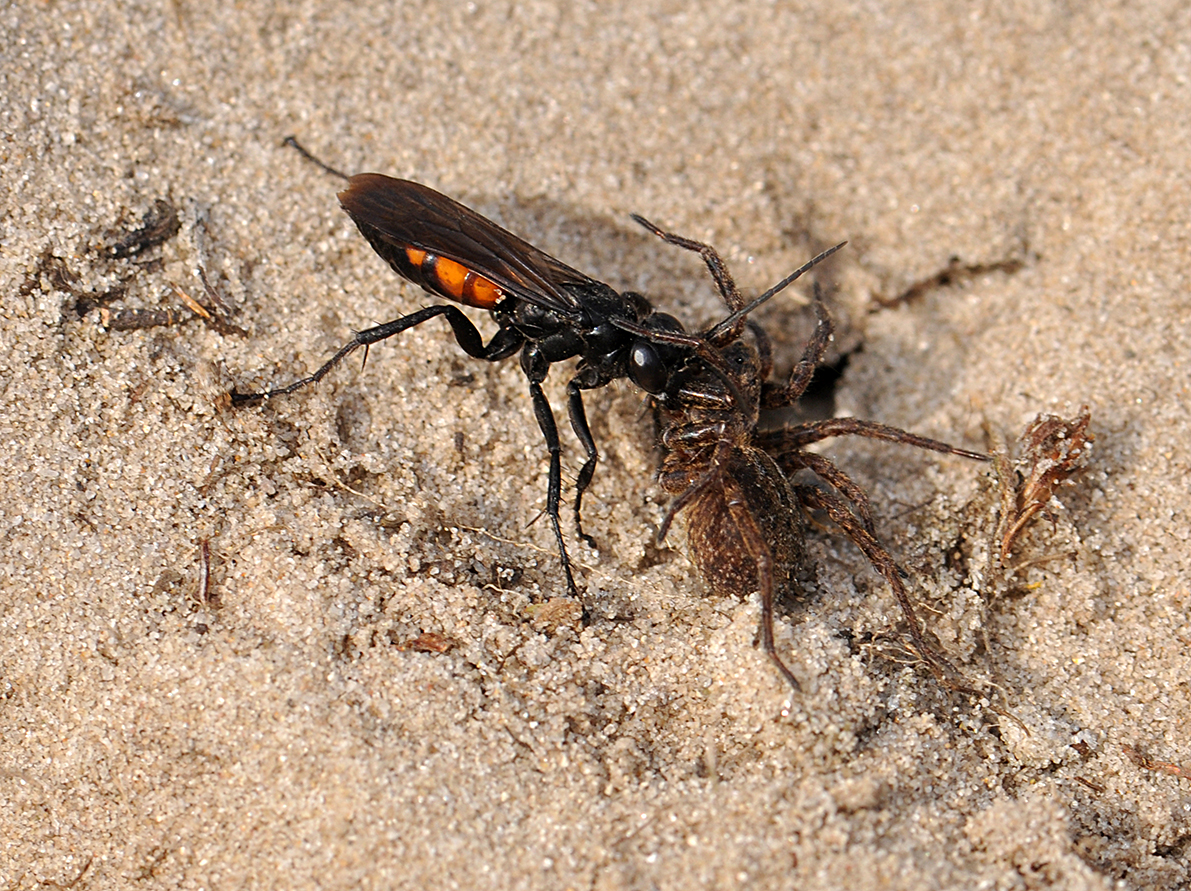 down and overpowering spiders, often bigger than themselves, before dragging the paralysed victims back to their nest.

The somewhat less heroic and rather unassuming looking Oxybelus uniglumis, which is a fierce predator of flies (it has repeatedly been observed catching series of five and six flies at a rate of one fly per minute), does not resort to such crude ways of transporting its prey. Instead, it impales each fly on its sting and carries it skewer-fashion back to the nest (photo 13). It is even able to fly while holding on to a prey item in this unique manner. 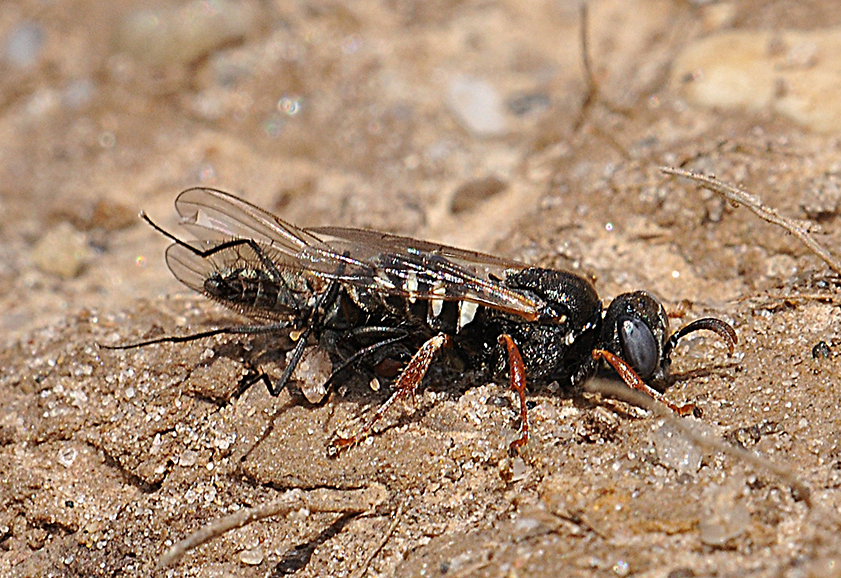 While this is probably one of the most unusual behaviours displayed by a solitary wasp, only relatively few species have so far been studied in detail and there are un-doubtedly many more similarly unique idio-syncrasies that still remain to be discovered in the intriguing tangle of diligence, hunt, battle and trickery that is the fascinating world of solitary wasps.