AT BAY MAGAZINE WE HAVE OUR OWN MR B WHO IS LICENSED TO THRILL – OURS ISN’T BOND…IT’S BIRD. THIS MONTH, LIAM’S MISSION INVOLVED THE VERY LUXURIOUS ASTON MARTIN DB11

A glance at Google maps earlier in the week, followed by a sharp right just a few minutes ago and I’m on, what the map promised to be, a gloriously sinuous Welsh B-road up and over Hergest Ridge. This is the place Mike Oldfield escaped to, to avoid attention after recording Tubular Bells – easy to see why, even on a Saturday night there’s nobody here. I’m pretty sure I’ve driven this road before; I just don’t remember certain sections of it being quite so narrow; it’s pitch black out here. And it’s raining too.

Oh, what I wouldn’t give for automatic dipping headlights right now. My fingers are working overtime on the paddles, shifting eight gears up and down. I can’t decide which is better, the engine’s softer and more long-legged GT mode, or Sport, which ups the throttle response and turns the new digital dashboard red. Either way I’m sure Sport+ is too extreme for a road like this. Then there are the adjustable dampers to attend to. Does this surface really warrant my preference of a slightly firmer suspension? And why are the wipers, the washers and the lights now all con-troled by the same stalk? In daylight it all seemed so easy. Better perhaps to switch everything back to fully automatic and relax. A wider road can’t be that far away.

The A44 and the A470 offer just the right combination of long straights and sweeping bends on which to sample the first of what Aston Martin refer to as their Second Century Cars; my dubious narrow B-Road choice links them. By using The River Café in Glasbury (A Bay favourite, always worthy of a trip) as a midway point my plan was a simple one. I could put 100 miles or so on Aston Martin’s new DB11, enjoy some of mid-Wales’ and the Wye Valley’s best roads, and get dinner in the process. Who said you had to suffer for your art? 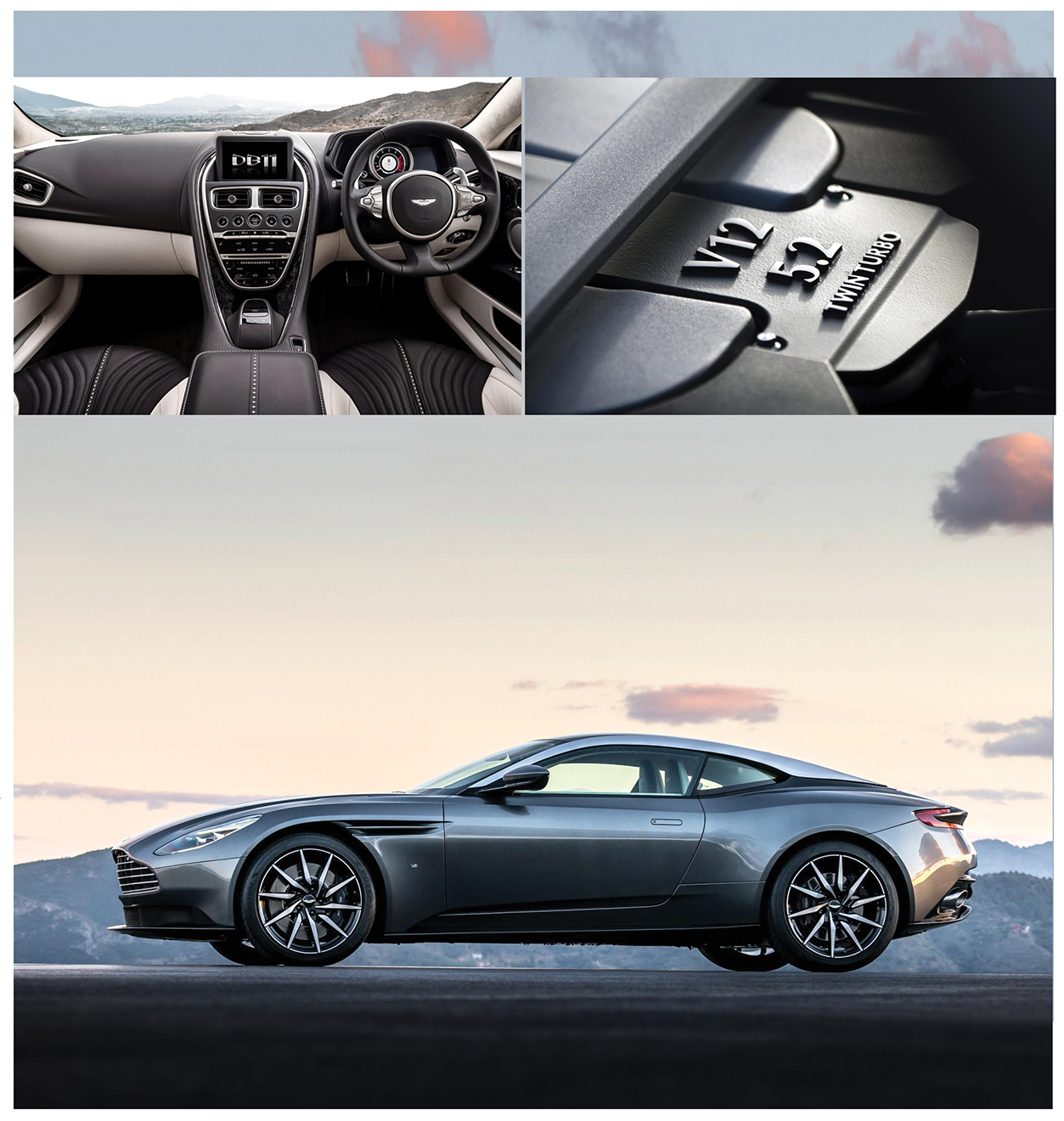 The DB11 replaces the gorgeous, if now slightly elderly feeling, DB9 and is the 10th DB car since 1941. The DB10 if you’re wondering was a Spectre, (the latest Bond film) special. Aston Martin made just 10 of them, hence the name, and the majority got “used up” during Spectre’s making. DB incidentally, stands for David Brown. Yes, the tractor man.

Power, all 600bhp of it, now comes from a 5.2 litre twin-turbo V12 that sits very near amidships, below the DB11’s vast and heavily vented clamshell bonnet. Sat low behind the DB11’s near quadratic wheel, the end of that bonnet feels miles away. Perhaps that’s in part due to the DB11 sitting on a 65mm longer wheel-base than the car it replaces, and it’s wider too. Or just maybe it’s because for the first time Aston Martin have used an electronic steering system. It’s beautifully direct, like all of the controls in fact, but I’m sure the older hydraulic system had more feel.

Hence my need to find some wider tarmac, to enjoy the new engine’s more pronounced (because of those turbos) mid-range punch, and to soak-up a little of its luxury. The DB11 gets an all new interior that not only looks gorgeous, it smells wonderful too. Everything you touch is either solid metal, polished wood, or it’s wrapped in the softest of hand-stitched brogue leathers – they were inspired by chief designer Marek Reichman’s shoes. 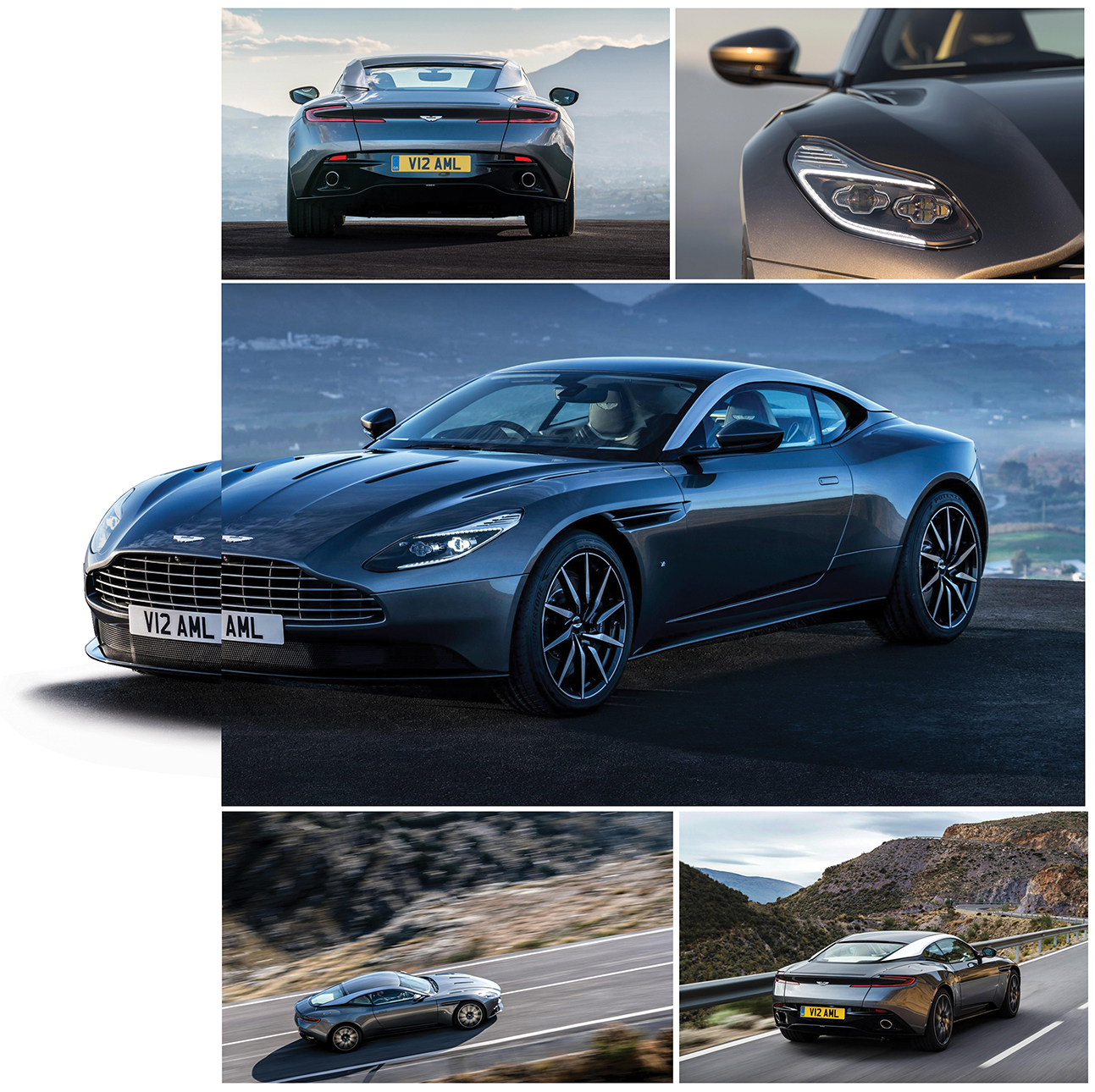 The electronics now come courtesy of Mercedes – they’ve recently bought 5% of Aston Martin – hence that single column stalk, it’s a Merc interior trademark, and they feel like they’ll last a nuclear winter. I’ll admit I’m not entirely convinced by the digital instrument cluster but I’ll concede it is far clearer than Aston’s all but illegible dials of old, even if, alas it lacks their charm. The tiny rear seats come with ISOFIX, nowadays too, but as they’re in an Aston they’re more likely destined to a life carrying something even smaller and more expensive (and more desirable?) than a toddler. Personally I wouldn’t want to spend too much time back there.

On the wall above my table in Glasbury there’s a map, and by the time the spiced apple cake and ginger ice-cream arrives I’ve already worked out which way I’ll take the DB11 home: the long route of course, that B-road can wait for another time, another car.

Like all of Aston Martin’s DBs, the DB11 is a GT car first, a sports-car second. Narrow B-roads aren’t its thing; it’s too big; it needs an open road. Yes, it’ll do 200mph, if you’ve the space, and it’ll show a clean pair of heels to nearly everything else that shares its near £160K price tag: 0-62 takes just 3.7 seconds whilst torque-steer by braking and some very cleverly incorporated aerodynamics such as the lift-reducing “aeroblades” in its C-pillars help stabilise it through the curves. Its real raison d’être however is to cover big mileages at similarly-sized speeds.

Aston Martin will no-doubt build more “focused” versions of this car for those who crave such things soon: this is just the beginning. But, for now at least, as a way of showing which way Aston Martin’s future is heading, the DB11really does take some beating.

SO, WHO’S THE TRACTOR MAN?

In 1947, Yorkshire tractor manufacturing magnate David Brown saw a classified ad in The Times offering for sale a “High Class Motor Business”. That business happened to be Aston Martin whose car making had been halted by World War Two.

He bought them for £20,500. The year after he bought Lagonda for £52,500, followed by the coachbuilder Tickford in 1955. Clearly where there’s muck there’s brass and designing tractors – the David Brown VAK1 sold over 7,700 units – had clearly allowed David Brown to amass a lot of brass.

Since their inception DB cars have beaten the likes of Ferrari at Le Mans, and upstaged Sean Connery as James Bond on more than one occasion – who could forget the ejector seat scene in Goldfinger?

David Brown, then Sir David Brown, eventually sold Aston Martin in the 1970s for £100, when they suffered “financial difficulties”. David Brown Tractors was bought out in 1972 by Case.

Of course David Brown wasn’t the only tractor manufacturer to turn his hand to luxury car design y’know. Porsche once built tractors too. And so did Ferruccio Lamborghini, long before he had a now legendary argument about a gearbox, (or was it clutch?) with a bloke called Enzo Ferrari. That though is another story.

Many thanks to Kevin, Sophie and everyone concerned at Aston Martin for the loan of their DB11