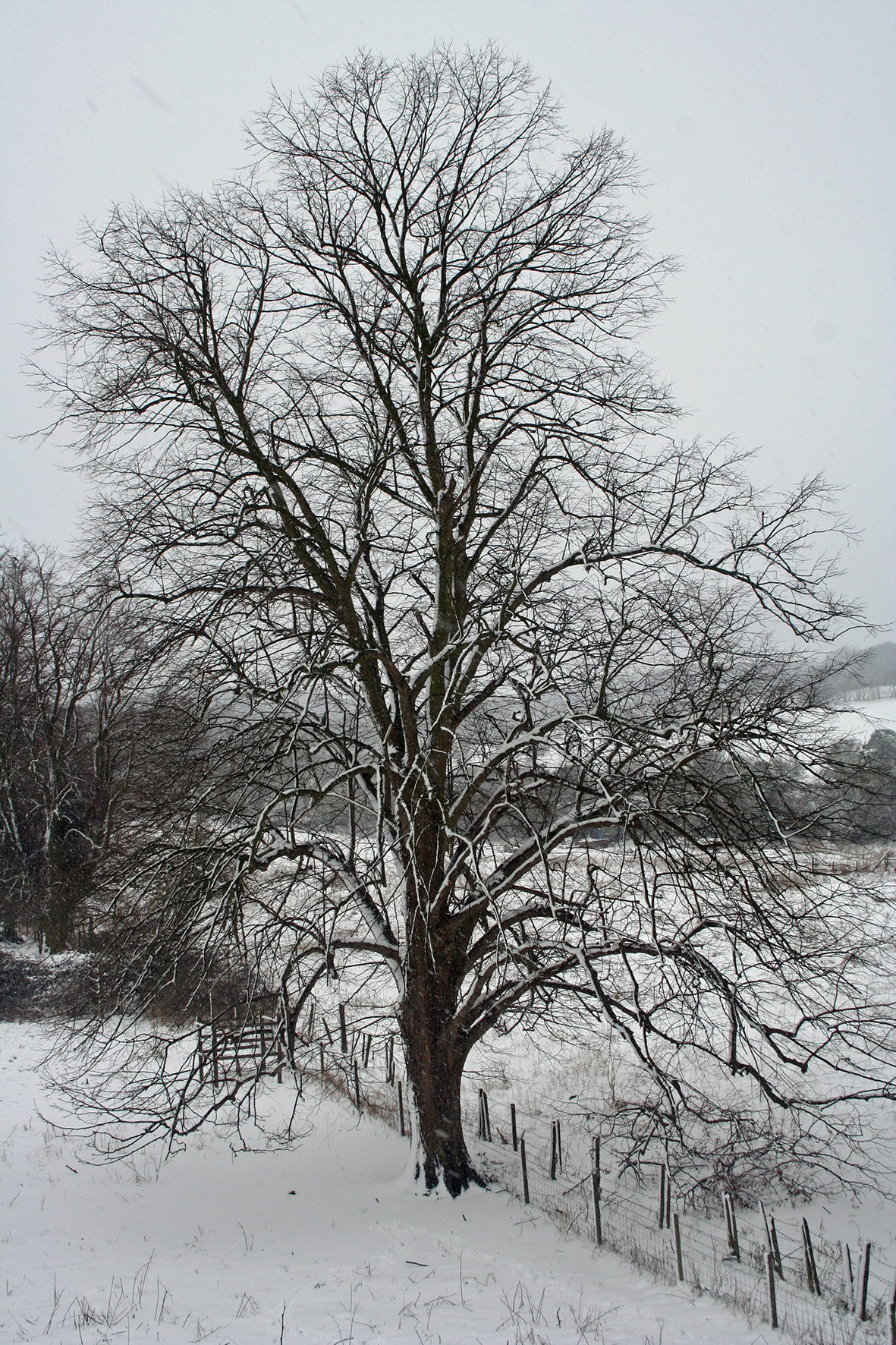 Most of us encounter trees every day, but despite their size they have a habit of blending into the background to such a degree that they are seen but not noticed as we go about our daily lives. Occasionally we may take a moment to delight in their colours when they are in flower or preparing to drop their leaves in autumn, but how much do we really know about the identities and private lives of our stolid omnipresent neighbours?

In order to find out more about a tree, determining its identity is an essential first step. At this time of year, attempting to make the acquaintance of a leafless and seemingly lifeless tree may seem like a hope-less endeavour. But luckily this is not the case. While admittedly more difficult than when in full leaf, it is often still possible to learn a lot about a tree even in its dormant state.

If it has had room to grow without being crowded or shaded, the overall shape and structure of a tree can be a good indication of its identity. The three British species of lime tree, for example, are all tall, stately, elegant trees, often with a somewhat rectangular outline once mature, with downward-arching branches and twigs (photo 1). Limes can reach heights of up to 40 metres, at which point they may be several hundred years old.

The next thing to look at is a tree’s bark, which can also provide a lot of information, more so in older trees than in young specimens. In the case of the British limes the bark is a pale grey-brown with cracks and fissures along its length (photo 2). There is some slight variation in bark colour between the species, with the bark of the Large-leaved Lime (Tilia platyphyllos) being somewhat darker than that of the Small-leaved Lime (Tilia cordata). The Common Lime (Tilia x europaea), a hybrid between the Large-leaved and Small-leaved Lime which is rare in the wild in the UK but is frequently planted, often develops large knobbly growths at the base of its trunk which can give rise to crowded twigs (photo 3). 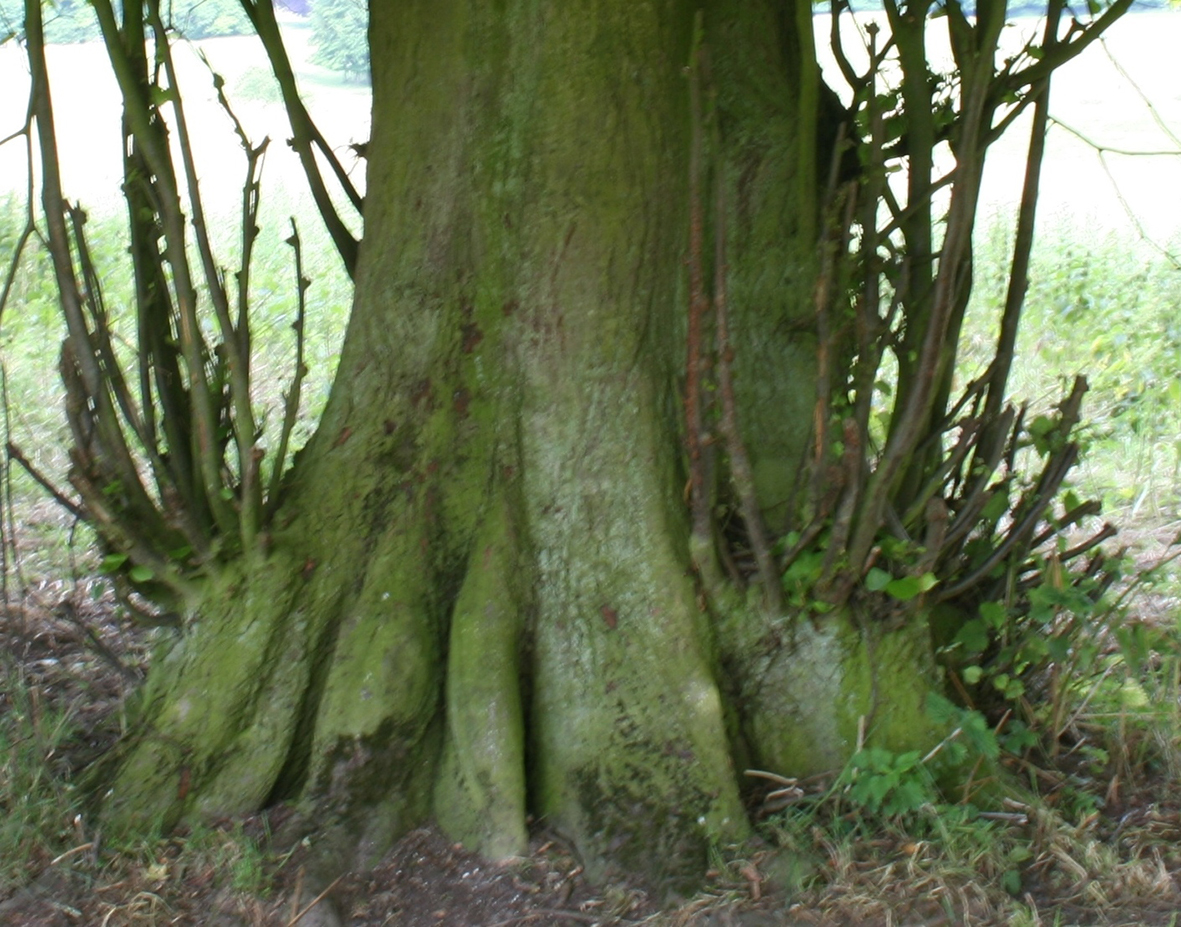 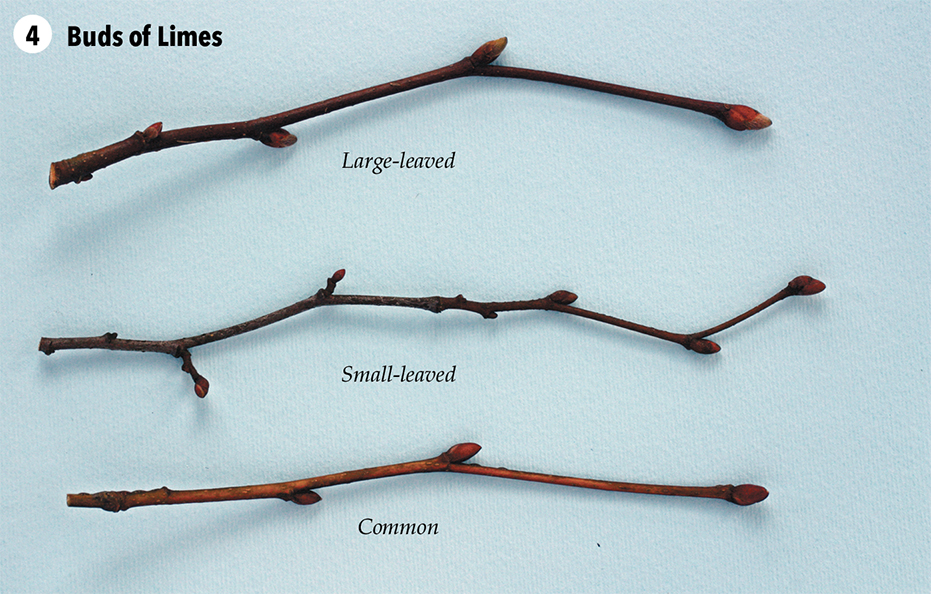 A close look at the twigs and buds is the next important step in becoming acquainted with a dormant tree, and a number of tree species can be reliably identified by examining the features of their buds, such as their position on the twig, colour and the number of scales protecting the bud. In all our species of lime tree, the buds are alter nately placed, reddish and only have 2-3 scales (photo 4). Between the three species of lime tree there are slight differences in hairiness and colouration of the twigs as well as in bud size. Appreciating these differences is easier when specimens from the different species can be examined side by side, but even then Small-leaved and Common Lime, in particular, can be difficult to tell apart in winter. 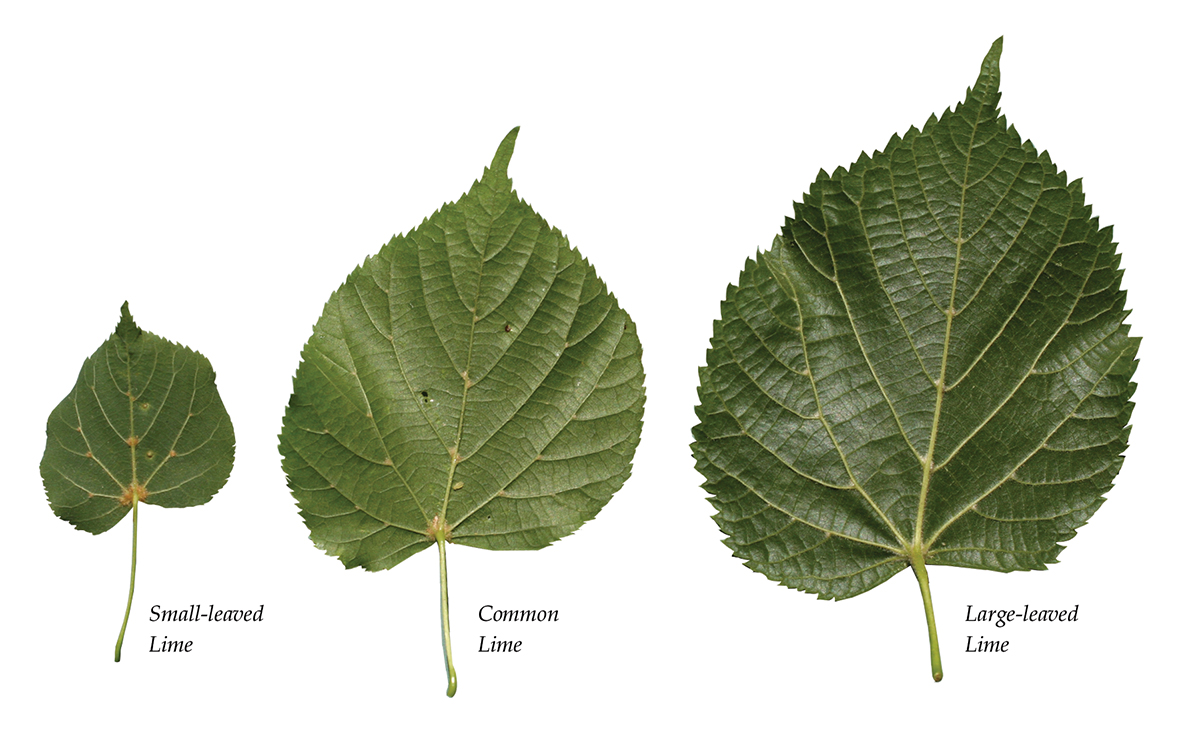 Of course things become considerably easier in spring once the buds burst and the leaves unfold. Lime trees, for example, have very distinctive leaves, somewhat heart shaped and with a pointy tip (photo 5). True to its name, the Small-leaved Lime has smaller leaves than the Large-leaved Lime, but the lower leaves can be of a similar size in the two species, which can lead to confusion. In those cases, hairiness can be used to distinguish between them, with the upper surface of Small-leaved Lime leaves being smooth while that of Large-leaved Lime leaves is hairy. The leaves of the Common Lime are intermediate in size between those of its parents and lose their hairs soon after unfolding. In the summer the lower leaves of lime trees (as well as any other objects left below them, such as parked cars) often become coated in a layer of sticky honeydew and subsequently black sooty mould which grows on it. The copious honeydew is produced by the Common Lime Aphid (Eucallipterus tiliae) which only lives on lime trees. Neither the aphids nor the sooty mould do any serious harm to the trees. 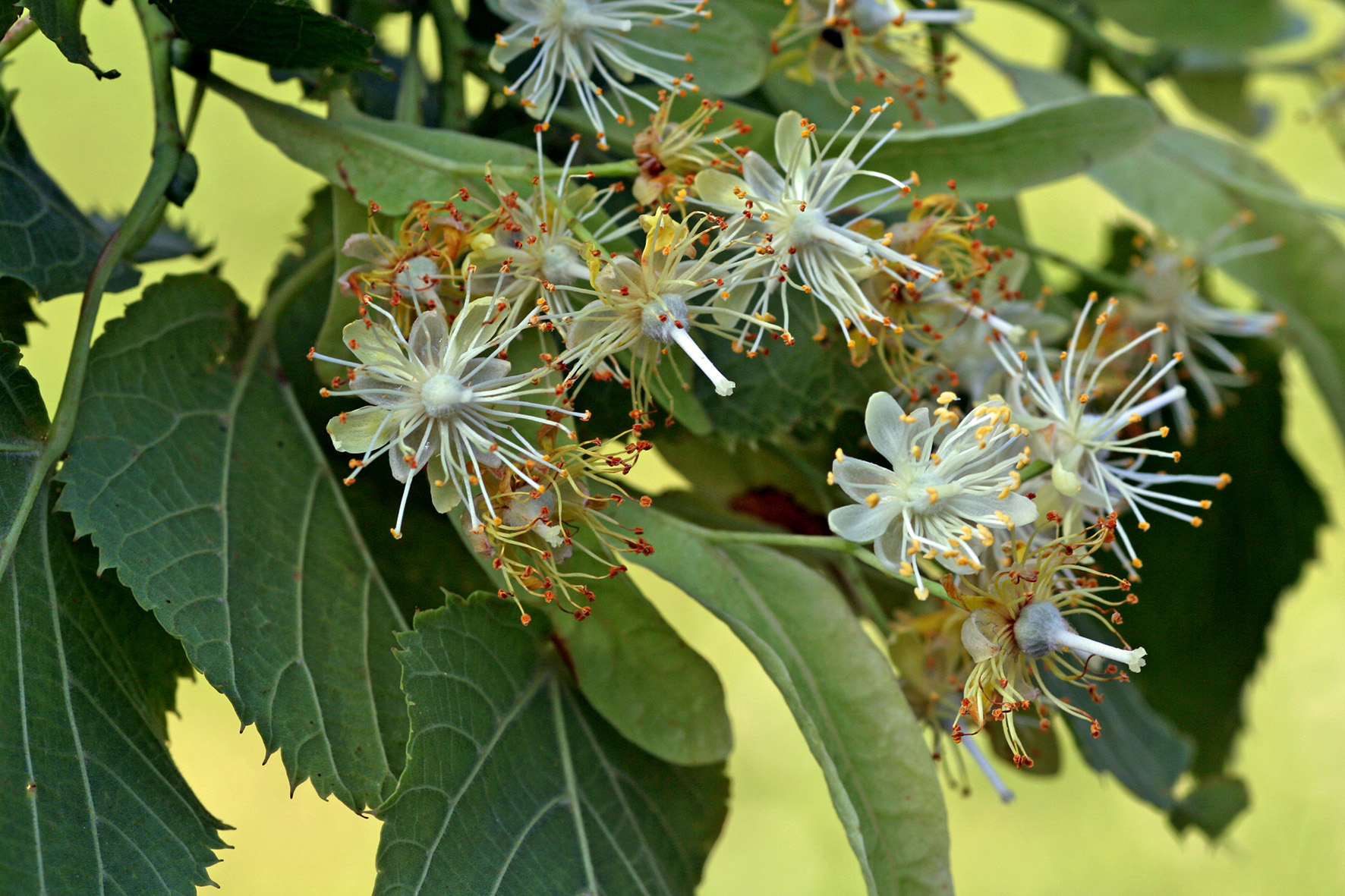 Few trees flower before they are 20 years old, but once they start, tree flowers can further aid in identifica-tion, assuming one is able to get close enough to examine them. Many trees are wind-pollinated, so not all tree flowers are as showy as the insect-pollinated lime flowers (photo 6), which are also highly scented, partic-ularly in the evening, and have long been used to make a soothing herbal tea. They are very attractive to insects, so much so that occasionally bumble-bees are unable to tear themselves away from the flowers when their nectar production slows down and they should be moving on to other plants. Instead they keep trying to drink from the lime flowers, completely exhausting themselves in the process and finally dying under the tree, sometimes in considerable numbers. Honey Bees, which are also very fond of lime flowers while they are producing plenty of nectar, do not succumb to this fatal attraction and move on to other plants when visiting the flowers is no longer profitable. 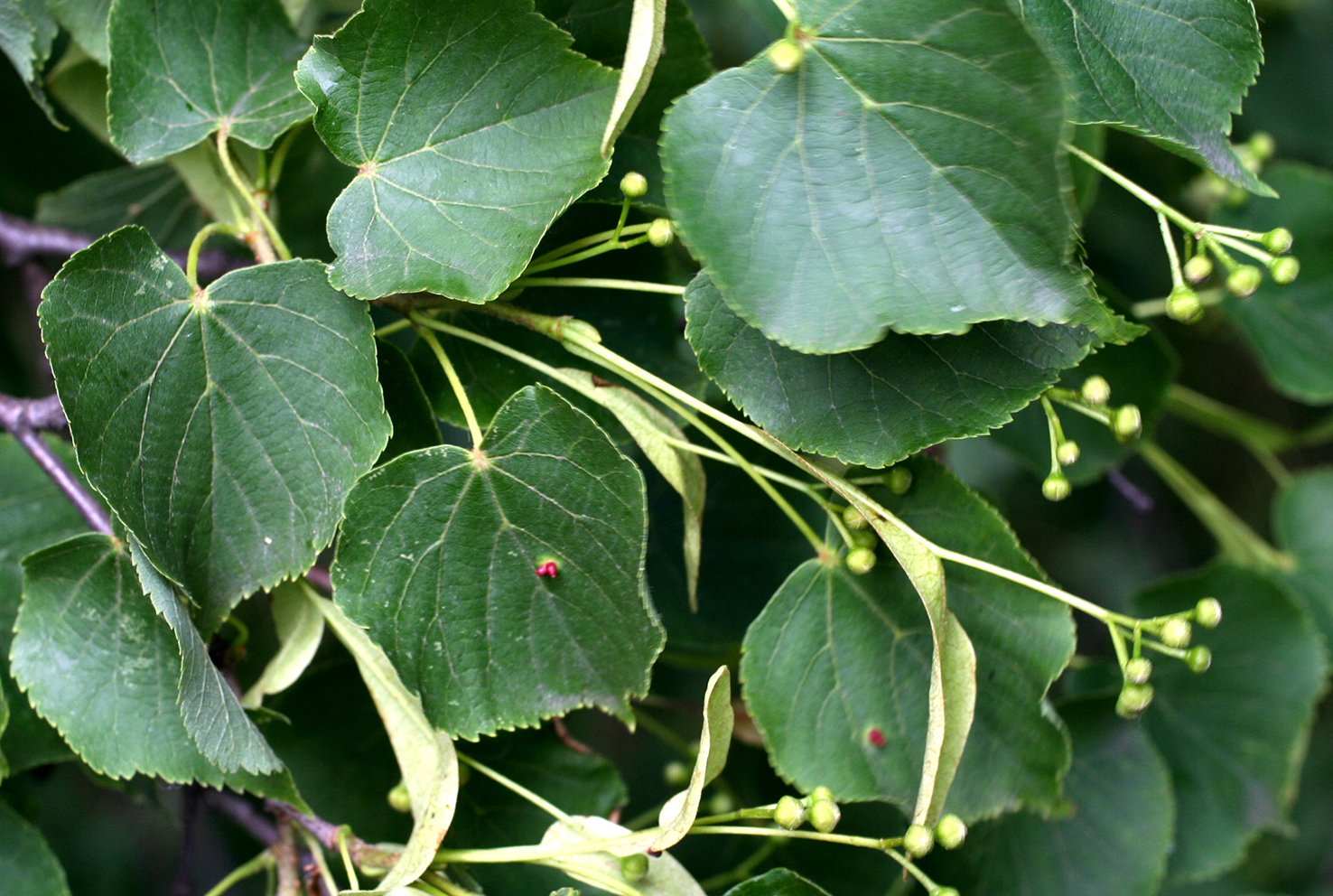 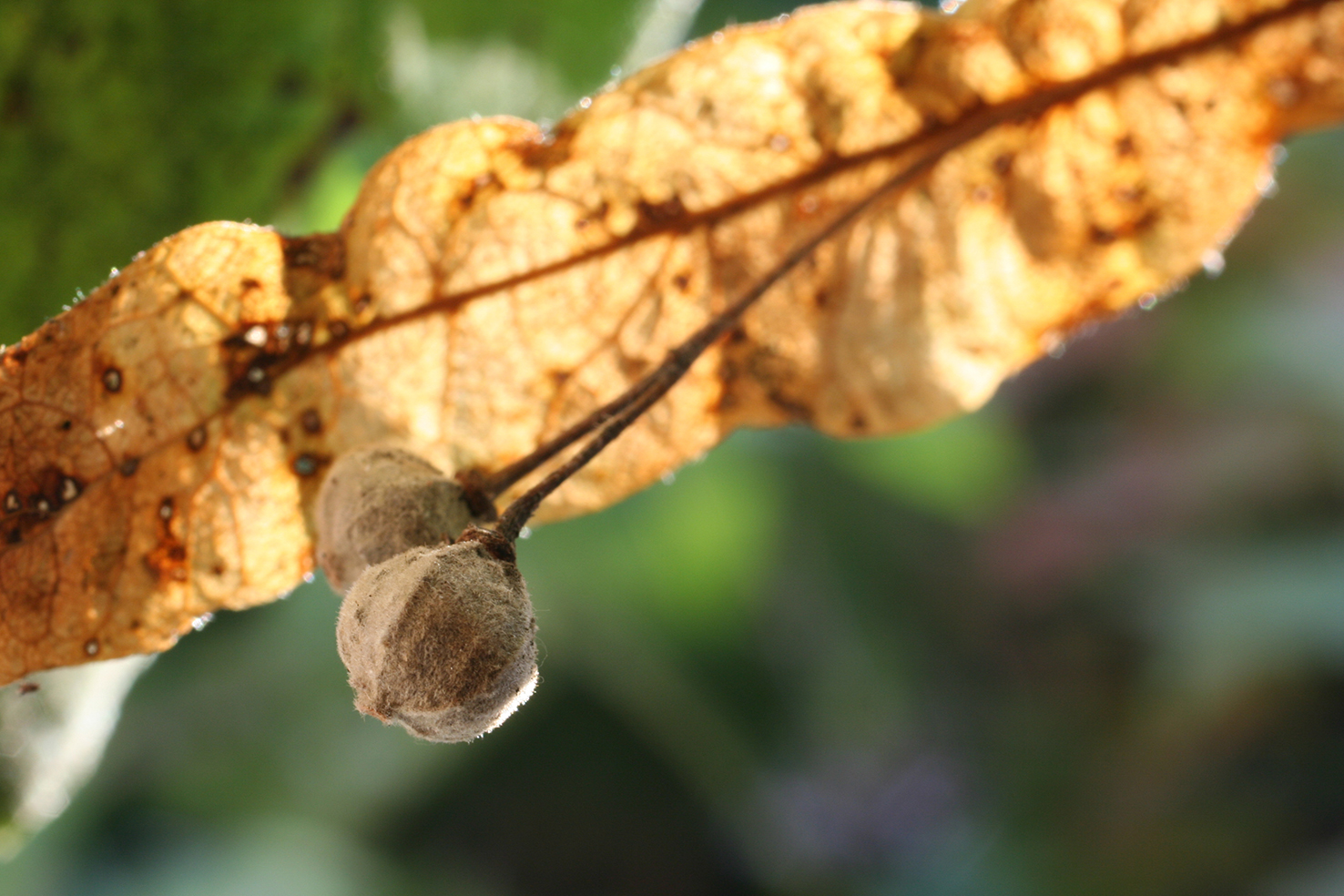 Tree fruits, too, are often distinctive and many have special structures to aid dispersal which allow the seeds to land some distance away from the parent tree. The fruits of the three lime species are also attached to a distinctive leaflet (photos 7 and 8). They are very similar to each other, but those of the Small-leaved Lime are smaller and easily squashed between the fingers whereas the slightly bigger Large-leaved Lime fruits are much firmer and cannot easily be crushed. 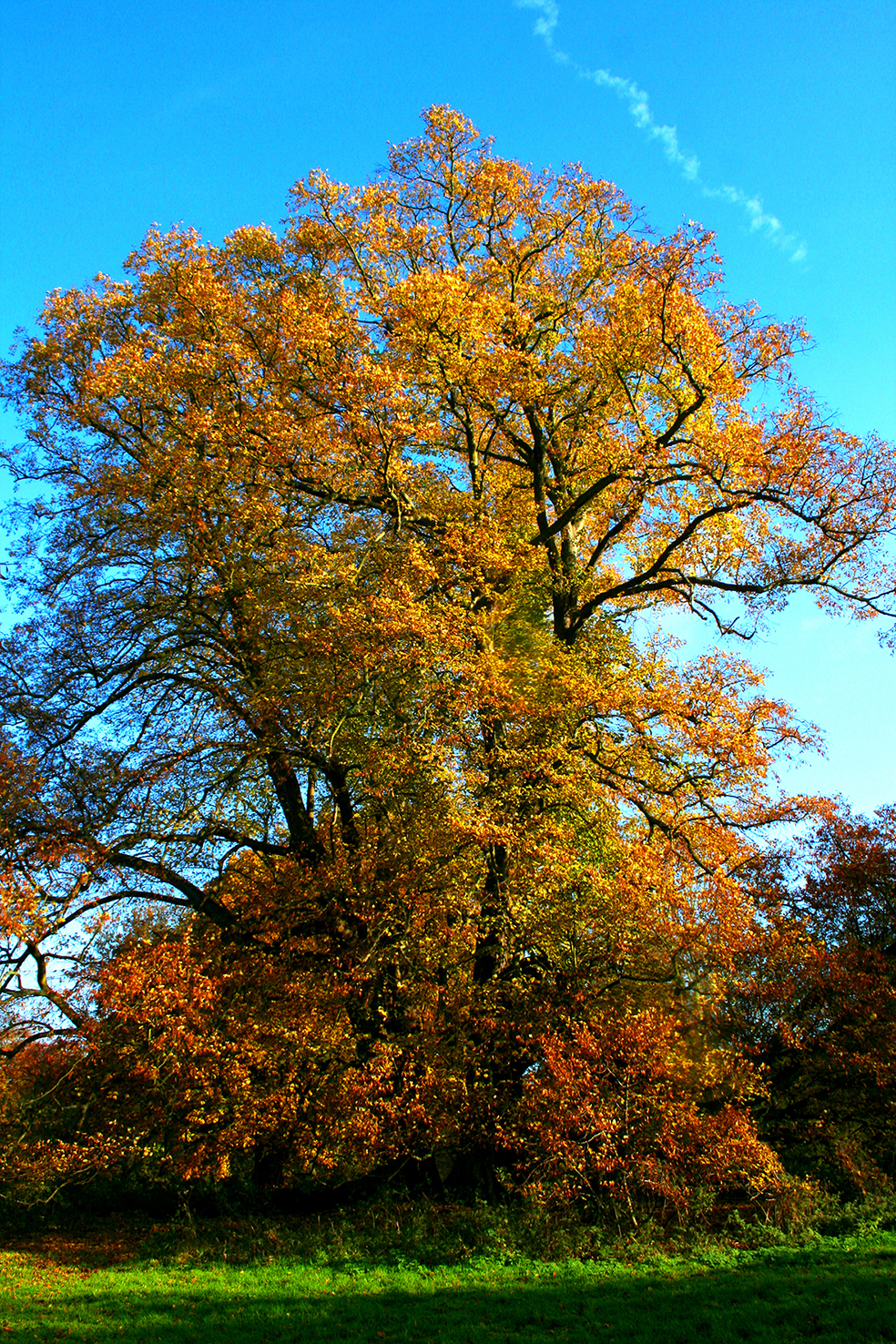 Photo 9 – Large-leaved Lime in the autumn

Autumn colours can be spectacular and unmistakable in some tree species. Those of our lime trees are not particularly distinctive, but still very beautiful (photo 9).

In the past, possessing detailed knowledge of the identity and various uses of trees was essential because they were important to many aspects of daily life. Nowadays, many traditional uses of trees have become forgotten as modern materials and mass production have replaced natural materials and local manufacture.

For example, the long, supple fibres of the inner bark of lime trees were used to make high-quality rope and string as early as the middle stone age, but they are rarely used for this purpose today.

The light coloured, soft lime wood, on the other hand, is still very popular with wood-turners and wood-carvers.

Even though it is no longer essential for survival, finding out more about the trees around us is still immensely rewarding even today, providing fascinating insights and allowing us to look at our often ancient contemporaries in a whole new light.

Photographs courtesy of Michael Demidecki who is a Fellow of the British Naturalists’ Association www.bna-naturalists.org