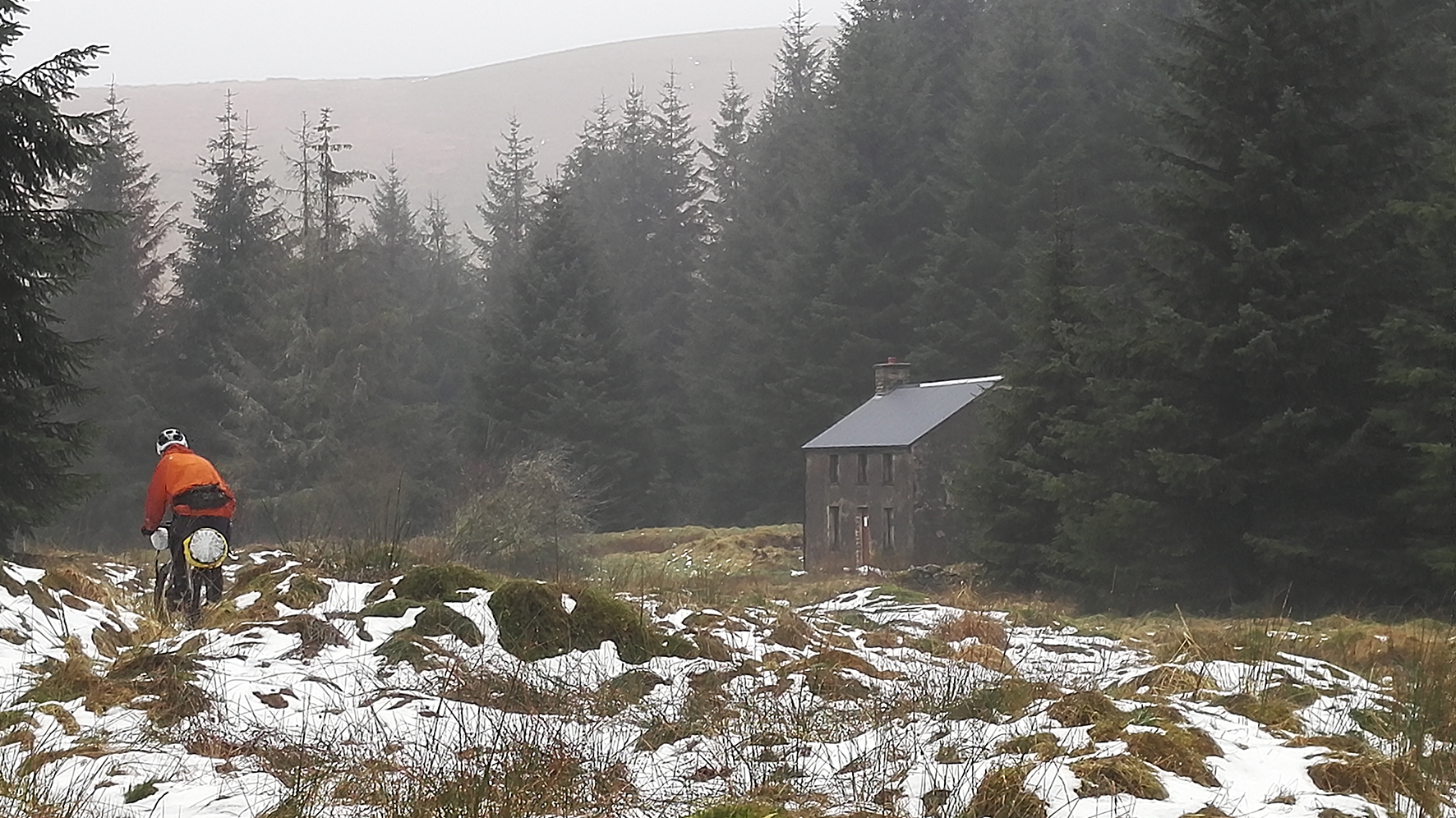 Our first bothy for the night at Moel Prysgau

THIS MONTH OUR INTREPID MOUNTAINBIKER KIM JONES DESCRIBES HIS EXPERIENCE WITH THE EARLIEST TRAVELLER’S HOSTELRY, THE SIMPLE AND LITTLE KNOWN BOTHY. THIS 18TH CENTURY WORD DESCRIBES A SMALL HUT AVAILABLE AS A MOUNTAIN SHELTER TO FARM WORKERS AND TRAVELLERS. PREPARE TO FREEZE TO DEATH! 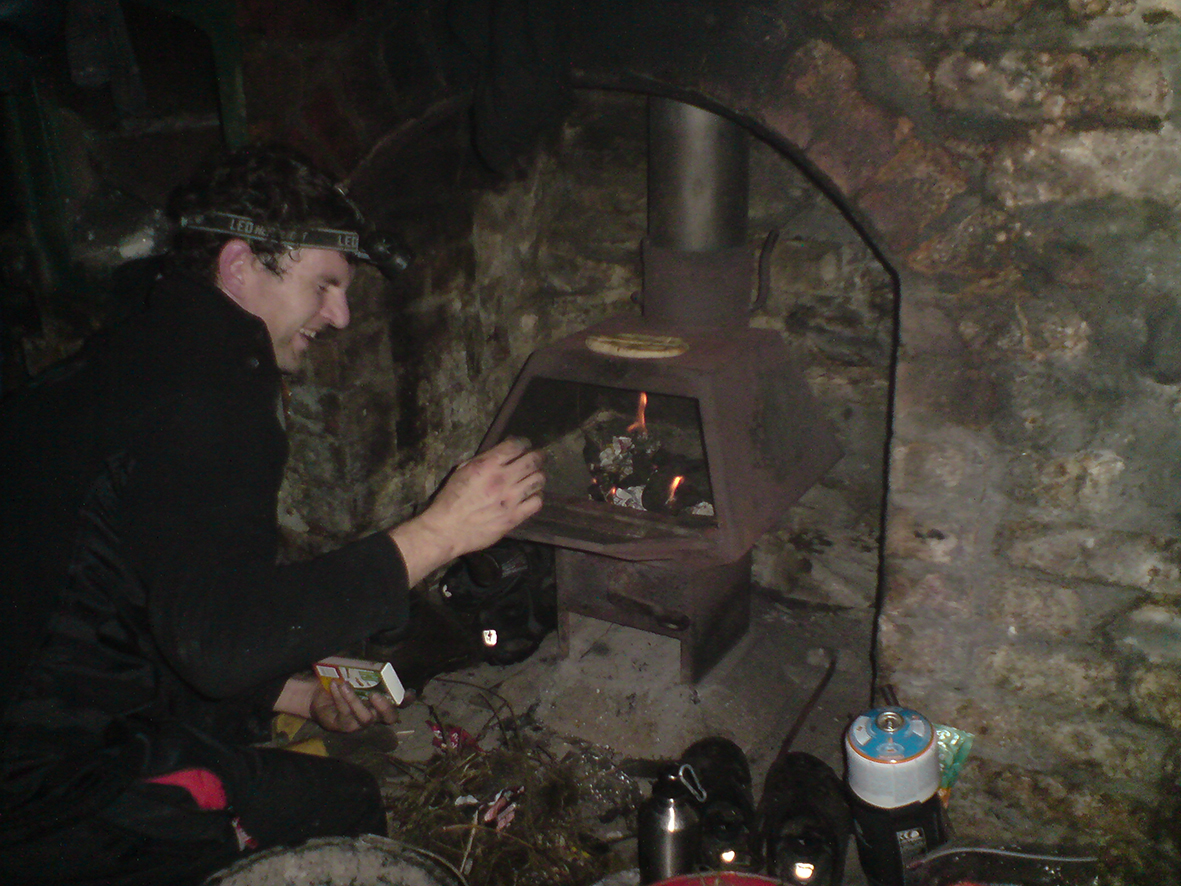 Toasting the pitta bread on the stove top

The stove spits and crackles as it provides some much needed warmth after a wet day in the saddle, the pitta bread slowly toasting on the top. We sit clasping a warm cup of tea, as our wet boots dry out in front of the open door which prompts the thought that ‘The steaming boot’ would be a great name for a pub. It’s mid-week in winter so we have the Bothy to ourselves and a glance out of the window reveals a sky ablaze with colours and the promise of a grand sunset; we quickly put on our damp kit and head back out and up towards Lyn Ddu.

The sky keeps its promise and we are blessed with a lovely sunset and the promise of a fine day tomorrow as we sit by the lake talking of future trips as the darkness descends. Only as we walk back towards the bikes do we realise that in our haste to get here we’ve both left our head torches behind. All we have to do is ride slowly back down the track we came along but oh no, Dart knows a shortcut so we head down some obscure single track between the trees making several left and right turns along the way before the path abruptly comes to an end. I must admit I didn’t pay much attention to the direction we were travelling in as I had enough problems straining to see and after half an hour or so it’s painfully obvious that with no sign of the forest road, Dart also has no idea where we are. One thing is certain, we are lost, in the dark, in the forest! I know we’re lost because for the second time I step up to my knees in mud and bang my head on a branch, the same branch on which somebody has stuck a coke can. Even here in the heart of a forest in mid-wales it seems there’s no escape from the huge global corporations which seem to play an ever increasing part in our daily lives. Sense prevails and we head downhill where we eventually pop out of the woods by the river and as luck would have it I recognise the spot and we head downstream back to the bothy. 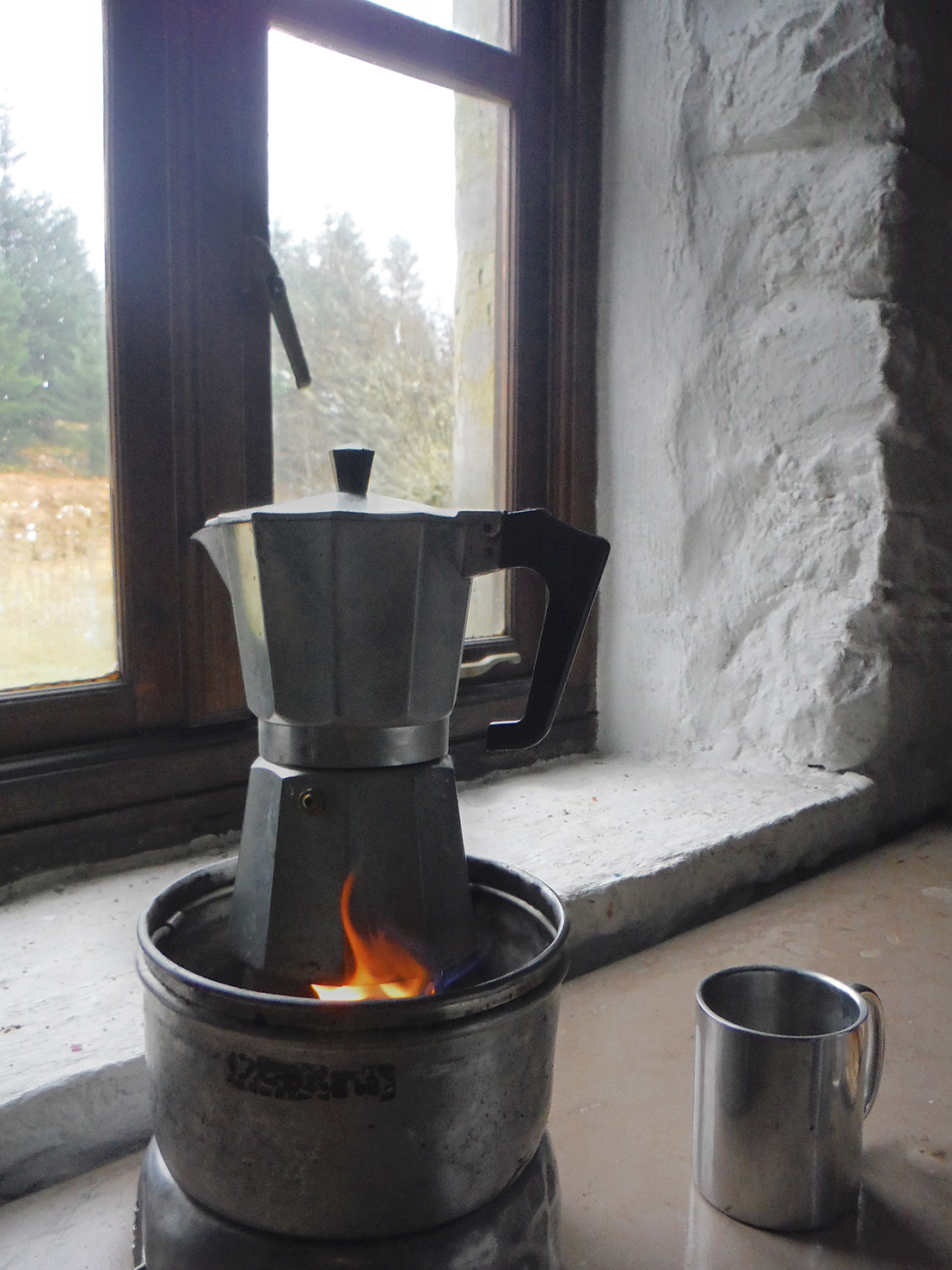 Morning brew for the start of the day’s cycling

Perhaps the MBA (Mountain Bothies Association) should add…….and for all those who are lost! Founded in 1965, the MBA (www.mountainbothies.org.uk) maintains what are usually remote buildings which are no longer of use to the owner but provide shelter to those who roam the hills. Currently there are just over 100 of these, the bulk of which are in Scotland, but over the years more and more have appeared further south and there are now 8 in Wales. There’s also a bothy known as Claerddu which is maintained by Severn Trent Water Authority and is a great introduction for those new to Bothying. For those who visit there is a special treat in store……What is it? I’m not going to tell you, go and visit, you’ll find out! There is no charge for staying in a bothy and it certainly can’t be booked, but if you choose, you can contribute £25 a year for membership which will support the ongoing maintenance work carried out by MBA volunteers and provide you with a quarterly magazine. 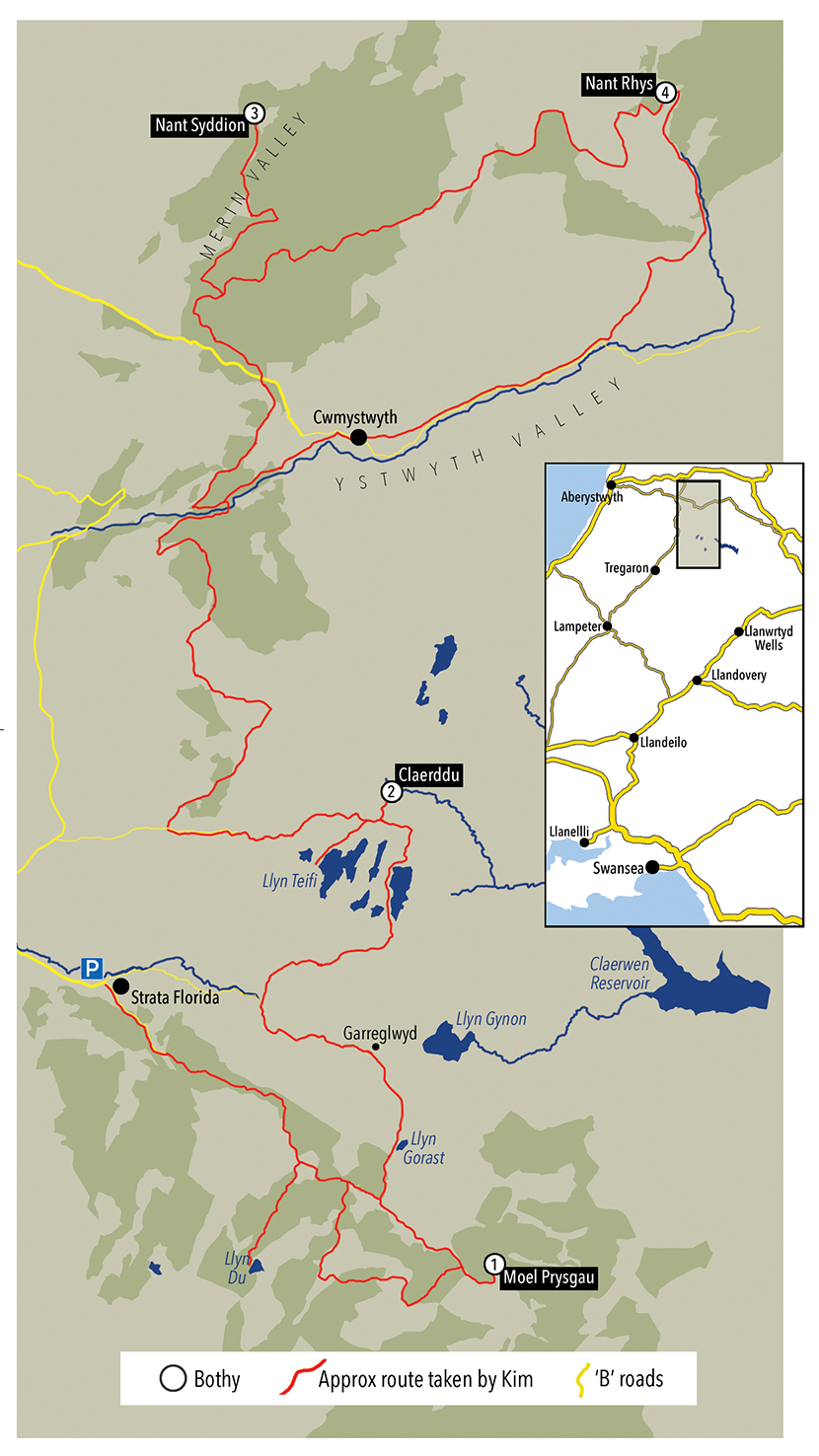 I think a night in a bothy is best described as camping without a tent. Most, though not all, have a stove and there is usually a sleeping platform, though again as in Nantsyddion this isn’t always the case. To quote the web site…

“There’s no tap, no sink, no beds, no lights and even if there is a fireplace, perhaps nothing to burn”.

Did I mention a toilet? Someone I know who used to love her bothy trips actually found her first experience of an outdoor toilet quite liberating. I’ll say no more except come prepared! Bothying is a basic but wonderful way to spend a night or two and I think for me, one of the joys is you never know if you’ll have company or not. If you do, they are usually like-minded people with a shared enthusiasm for the outdoors and life itself. Over the years I have met some fascinating characters some of whom have remained friends.

20 or so years ago the MBA was almost a secret society, with only the privileged few knowing of their where-abouts and even fewer knowing they even existed. This all changed with the introduction of the web site listing all the locations together with grid references; at the time this was a contentious issue with many of the members being quite vocal in their disapproval of this unnecessary publicity. I must admit that personally I had some empathy with their thoughts and feelings but this is a selfish if protective view as everybody should have the opportunity to experience a bothy. 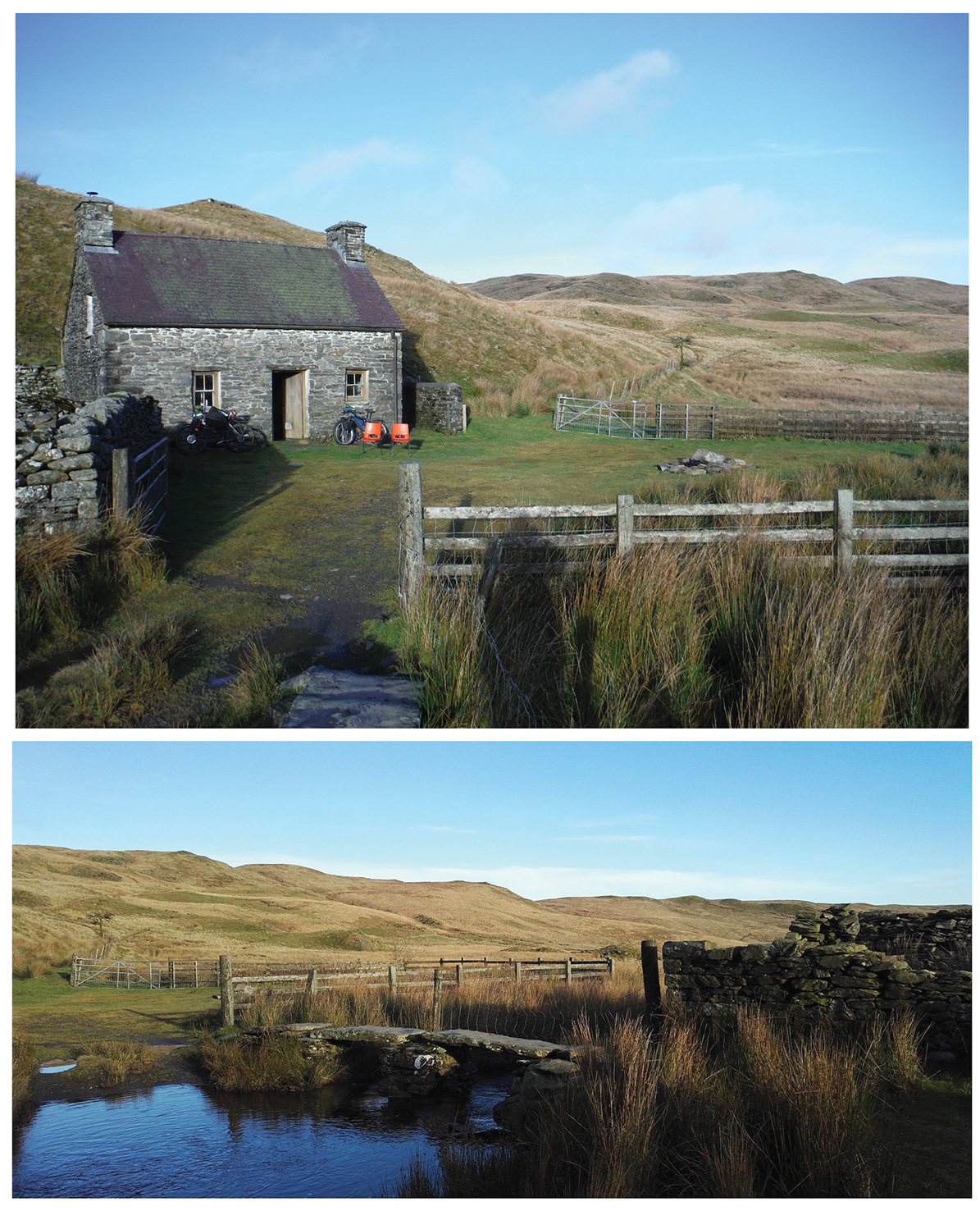 In addition to Claerddu, 3 of the 8 Welsh bothies are situated in mid Wales and are ideally located for a short 4 or 5 day trip on a mountain bike. We spent many an evening looking at the map, trying to work out the best route before eventually agreeing to spend the first night in Moel Prysgau then continuing onto Nant Rhys via Claerddu and Nant Syddion. We left the car in Strata Florida near to the Abbey; this is a cruel start to a ride as you climb over 330 meters before embarking on a riotous wet and stony descent down to Moel Prysgau approximately 10km away. Bothy etiquette states that before leaving, not only do you sweep up but you also leave kindling in the stove and some sawn logs ready for the next occupant. We arrived late in the evening, soaked to the skin having both taken an unplanned dip in one of the river crossings and were very grateful to the previous occupant who had prepared a good stock of wood which meant we could get a fire going straight away. Some years ago I shared a few beers with a gent in the Black Lion in Pontrhydfendigaid whose mum was born in Moel Prysgau. He told me how on a Sunday she used to walk to Strata Florida where she attended school, staying with her grandparents before returning home after school on a Thursday. One winter she missed school for over a month as they were snowed in at Moel Prysgau! 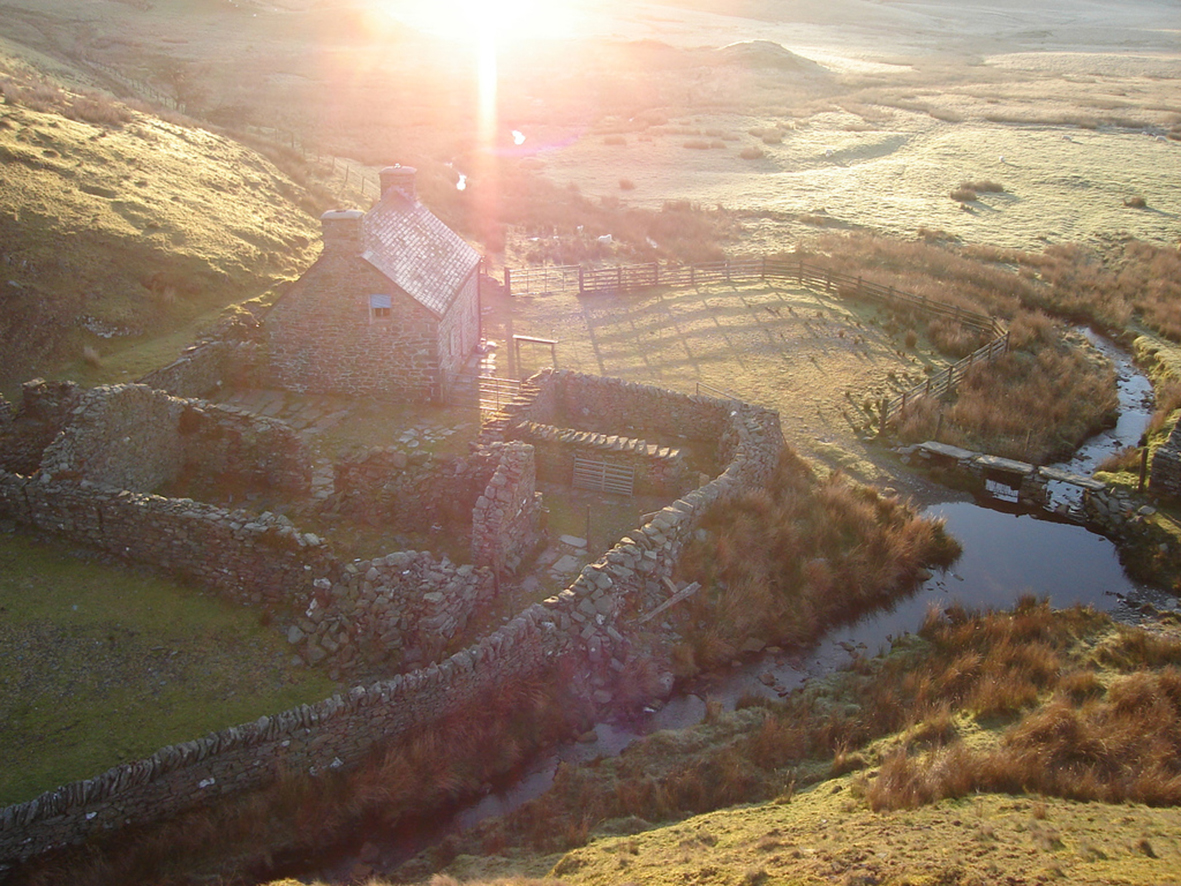 After a splendid breakfast of bacon and coffee we reluctantly left the relative comfort of the bothy to ride to Claerddu. There are various route options open to you but for reasons which I still can’t fathom, we choose to leave the Tywi track and head north to Garreglwyd via Llyn Gorest. Don’t! And whilst the bridleway up through the Teifi pools is a great descent, it’s a rather unpleasant ascent. Take it from a man who knows, choose a different route! When we finally arrived at Claerddu the trials and tribulations of the day were soon forgotten and after a supper of warm cheese in pitta bread washed down with some rather fine port we slept like Royalty.

This set the tone for the next 3 days and we soon fell into the routine of long days in the saddle followed by evenings sat around the stove chatting and putting the world to rights. We never seemed to take a direct route, partly because the riding in this area is so good but often simply the fact it just felt great to be travelling again with the bike. 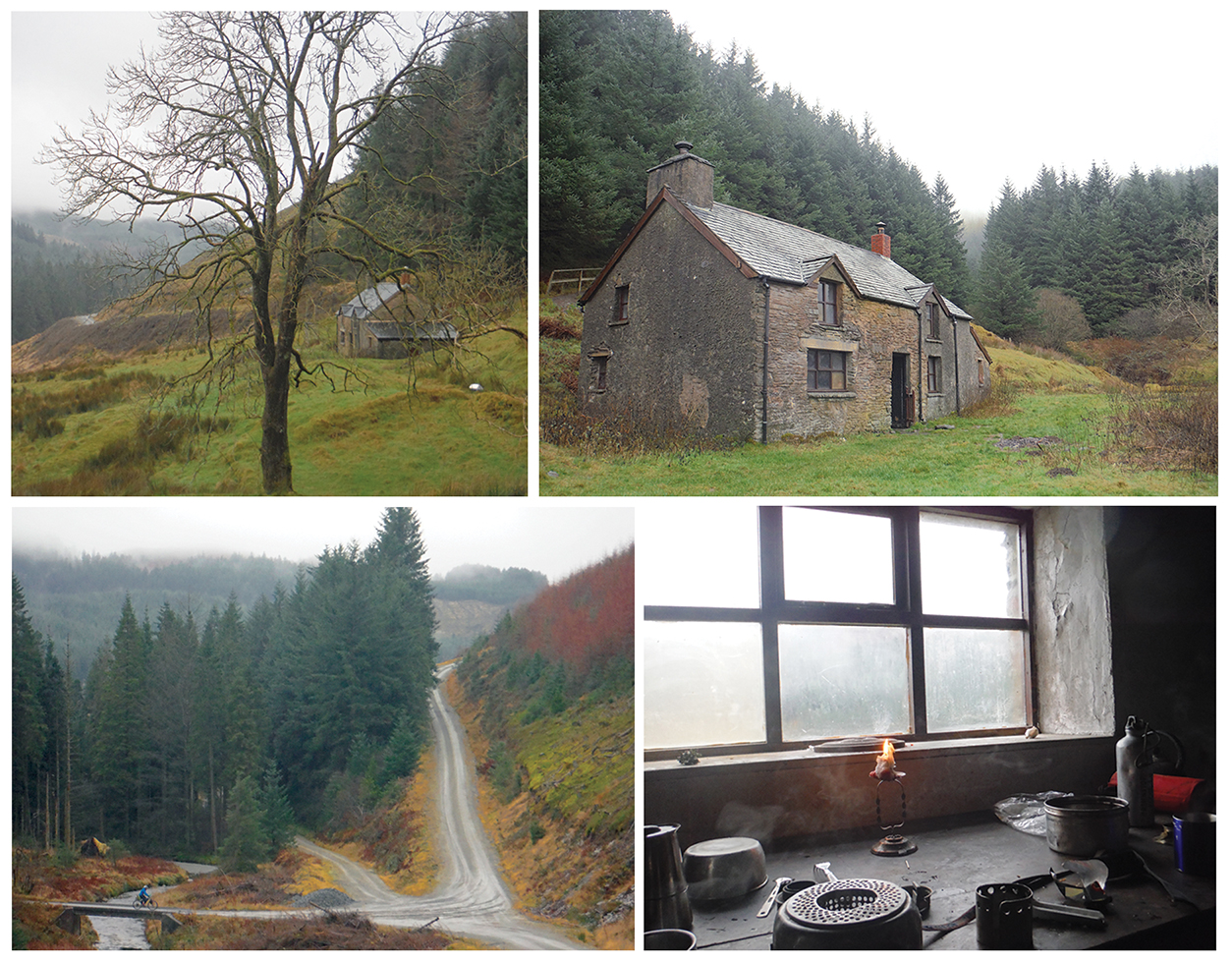 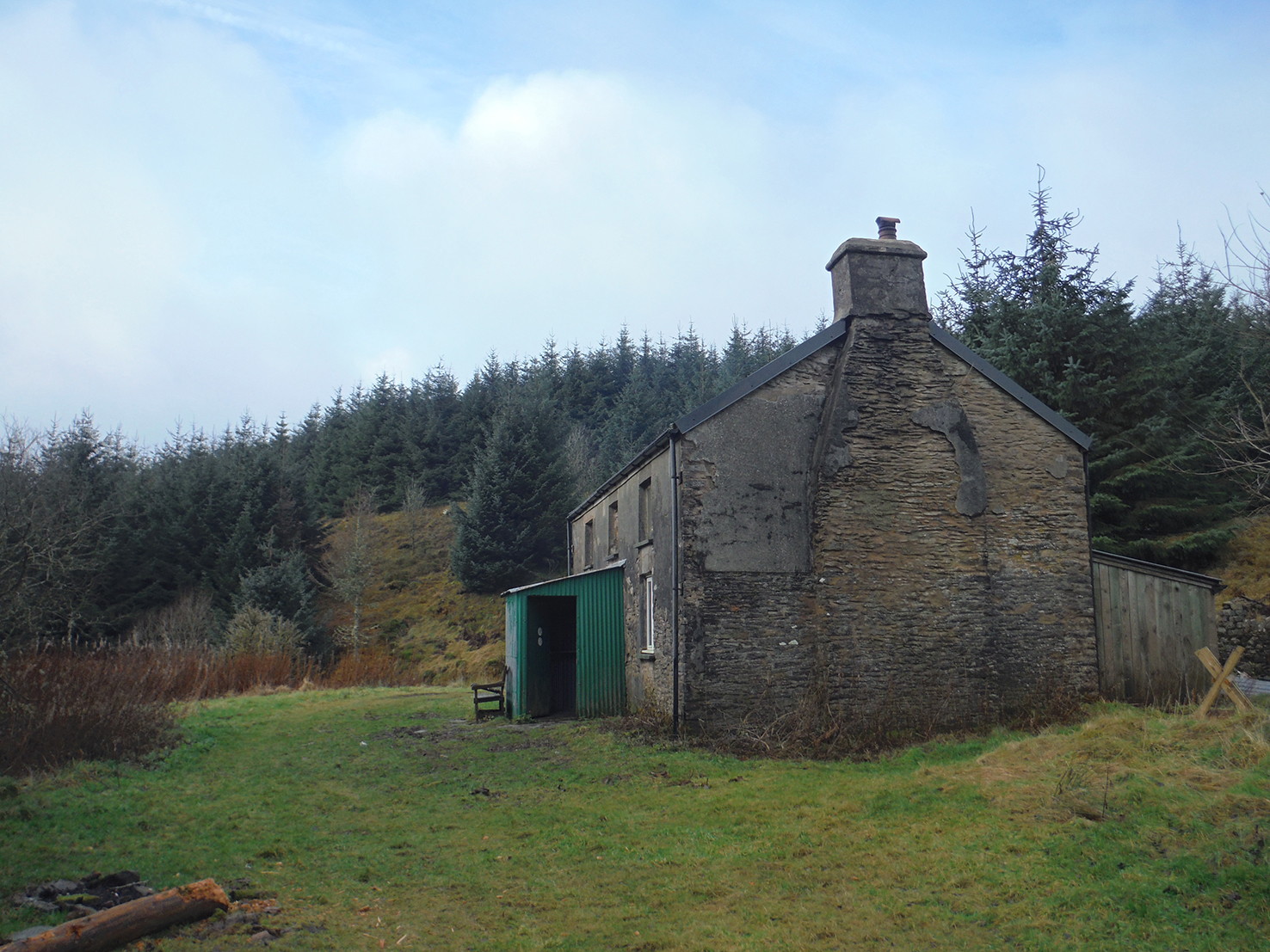 It had been sometime since I’d last visited Nant Syddion and I’d forgotten what a delight this bothy is. Situated on the edge of the forest it offers some great views up and down the Merin valley and is also very spacious. In contrast Nant Rhys suffers from having lost its loft space due to what seems quite frankly ridiculous health and safety restrictions, it’s a bothy after all! 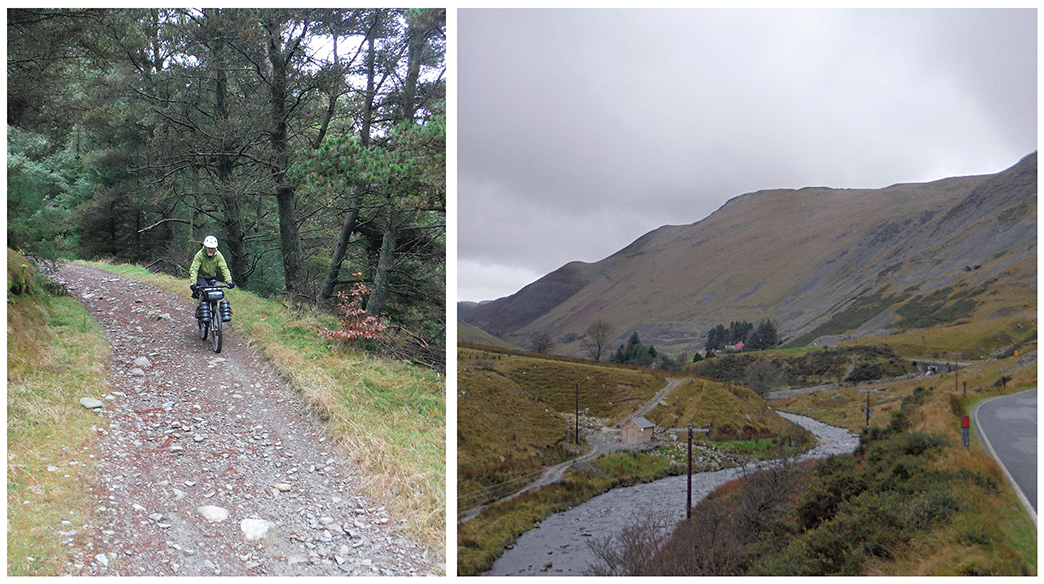 The descent on the Ystwyth Valley 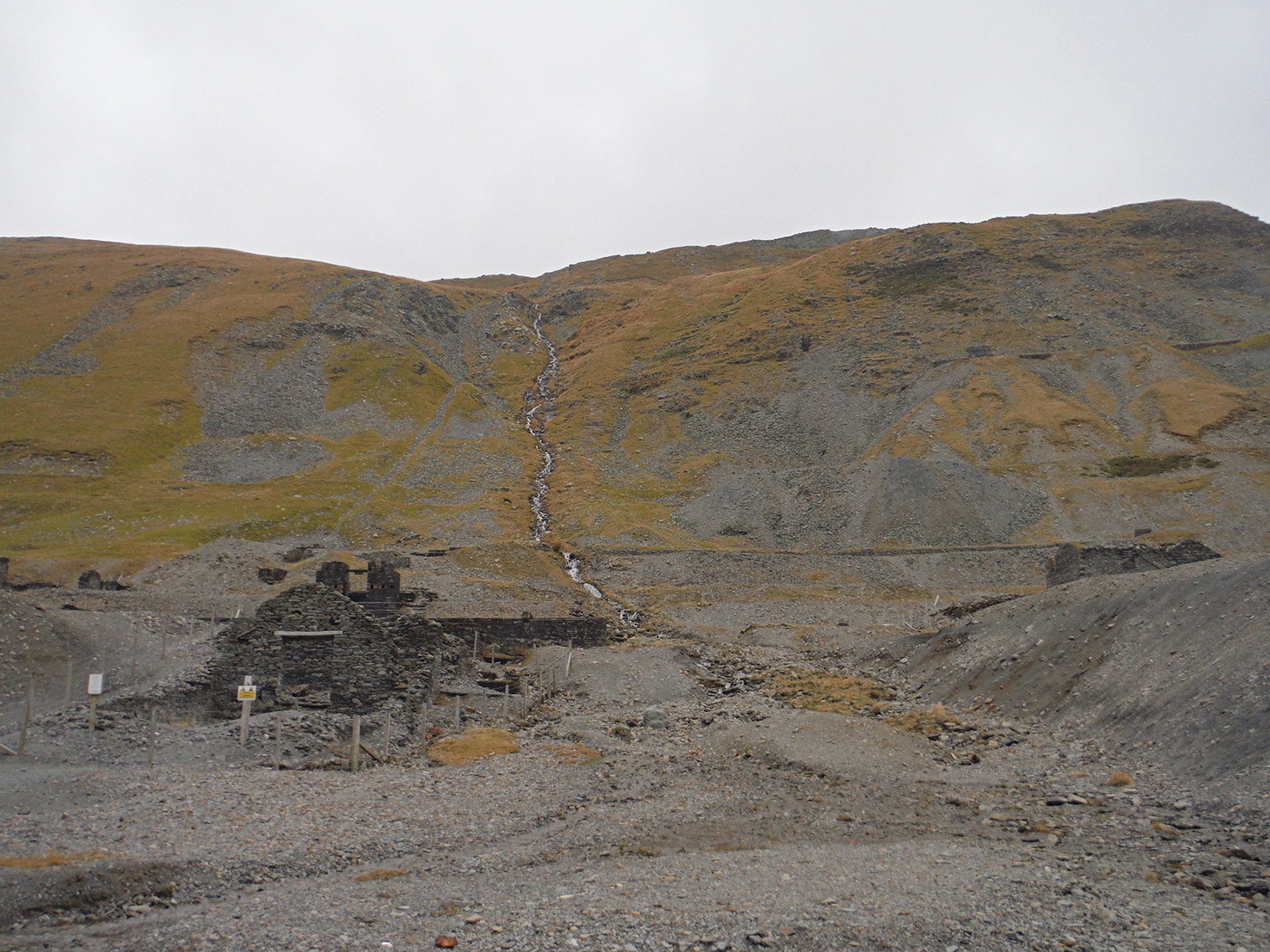 On the way back to the car we rode down the Ystwyth valley which is an absolute joy and I certainly recommend taking some time to explore the old mine workings as silver, lead and zinc have all been mined here since Roman times.

It’s difficult to pinpoint one thing in particular that I find so appealing about bothies. Whether it’s the feeling of cosiness, the prevailing smell of wood smoke, the fact that your cuppa never tastes this good at home or that you are far removed from the comings and goings of everyday life. Perhaps it’s all of these and more. Maybe the best way to describe it is to say that staying in a Bothy is rather like owning and driving a Land Rover – on the surface everything about it appears wrong but if you experience it,

I guarantee it will put a smile on your face.