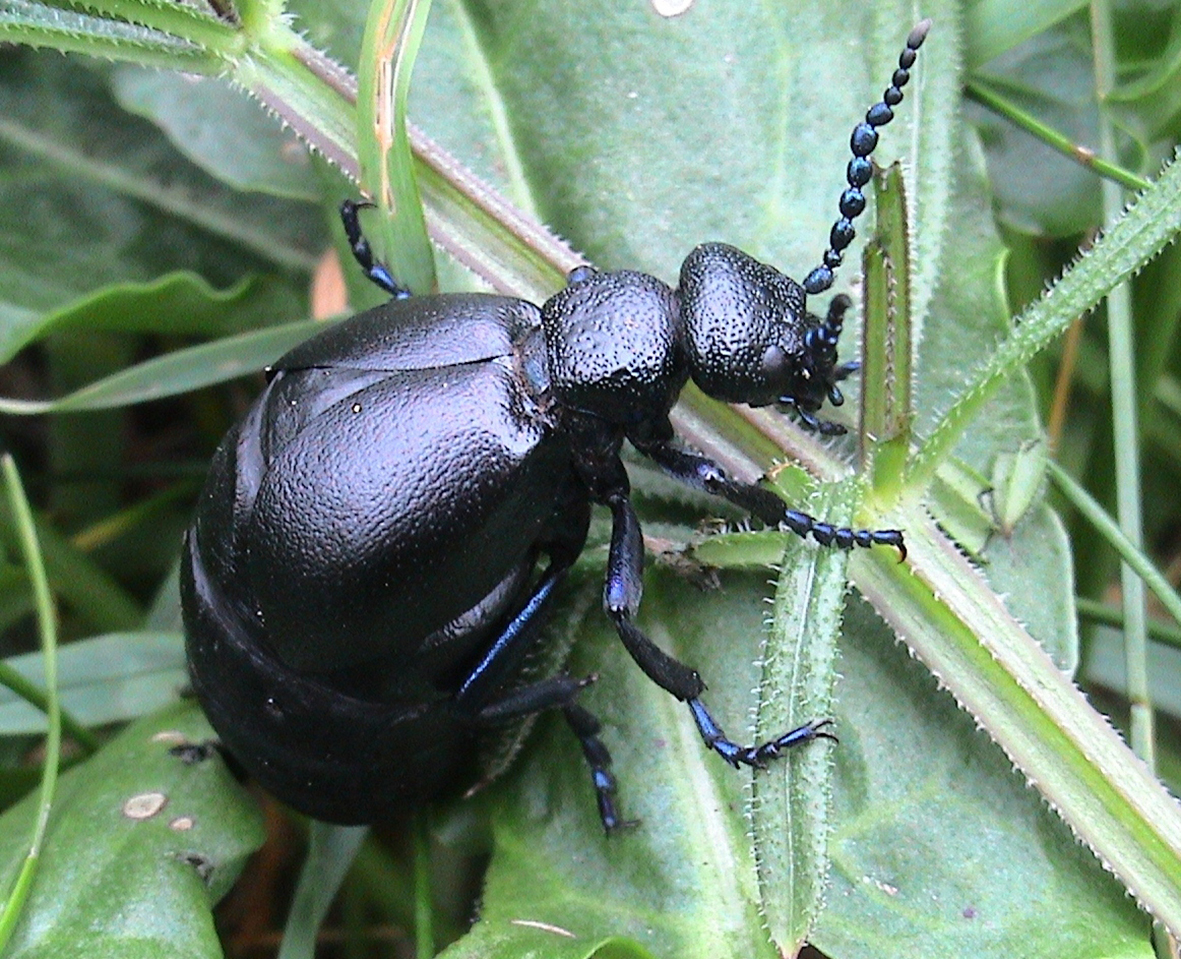 Emerging from one’s egg with a body length of less than 2 mm and finding oneself in the middle of a busy path far from food and shelter can certainly not be considered the best start in life. Statistically, the chances of making it to adulthood under the circumstances are less than one in ten thousand. And yet oil beetle larvae, which find themselves in exactly this seemingly impossible situation, have been beating the odds for well over 50 million years. 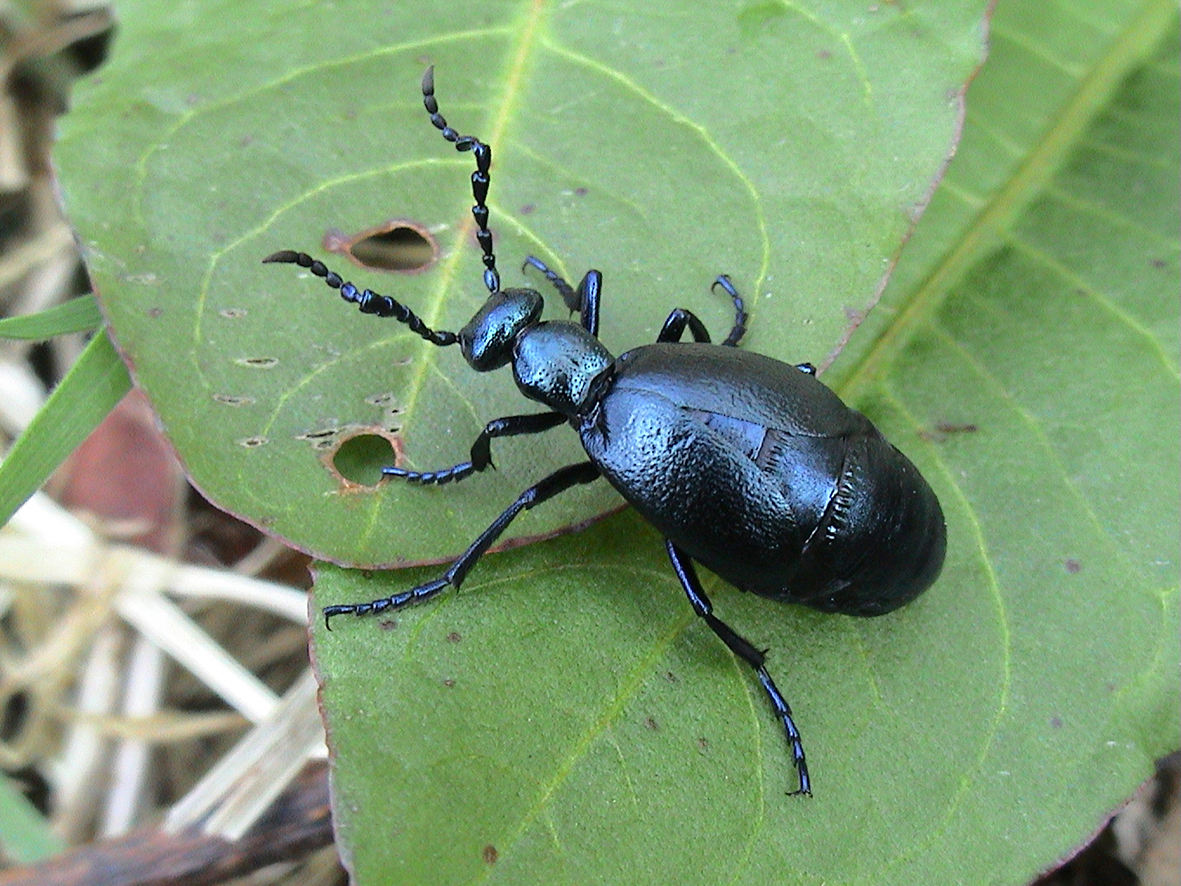 Oil beetles of the genus Meloe (and related species in the family Meloidae) probably have the strangest life history of all insects. Their eggs develop in a small underground chamber laboriously excavated by the female in compacted soil. In some species, for example the Black Oil Beetle (Meloe proscarabaeus) (photo 1), the eggs hatch after a few weeks whereas in others such as the Violet Oil Beetle (Meloe violaceus) (photo 2), they take several months and the larvae remain underground until the following spring. When they are ready, the tiny larvae (known as ‘triungulins’ because they have front feet which appear similar to a trident) dig themselves out of their nest. Finding themselves on the ground, often some distance from cover, is not their biggest problem, however.

The only food suitable for their further development are the larval provisions inside the nest of a compatible species of solitary bee. Triungulins can move fast and can go for some time without food, but given their diminutive size and the relative scarcity of solitary bees, randomly wandering around in the hope of finding a suitable nest would hold little chance of success. Instead, the larvae make their way up plant stems and attempt to find a flower, where they lie in wait for a passing bee, in the hope that it will carry them to its nest. 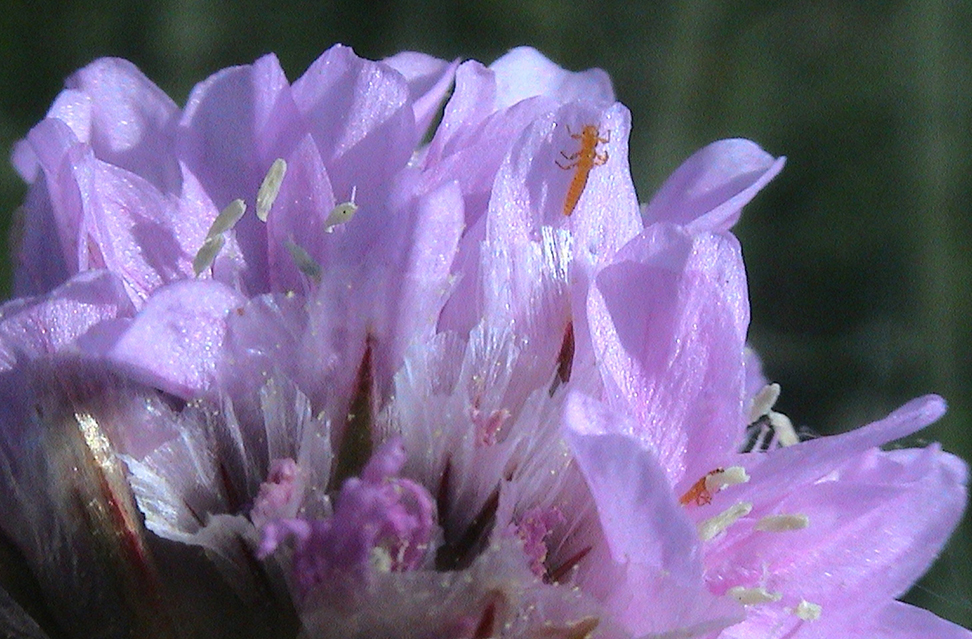 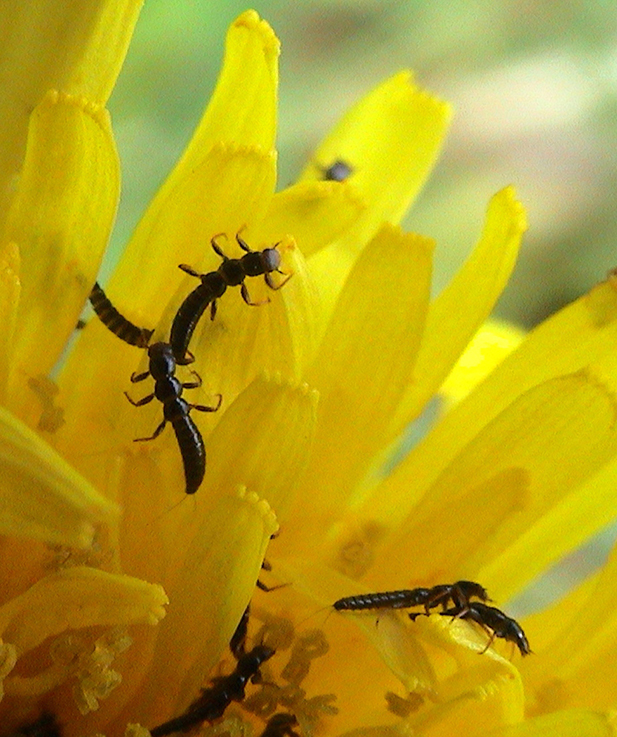 The triungulins of the Black Oil Beetle are light-coloured and 1.5 mm long (photo 3), making them smaller than those of the Violet Oil Beetle, which are black and reach a length of 2 mm (photo 4). Triungulins are distinctly louse-like in appearance, which confused scientists for many years. It was not until the 1800s that the bizarre life history of the oil beetles was fully understood, and to this day there are aspects that still remain to be investigated, for example the full range of potential host bees utilized by each species of Meloe. 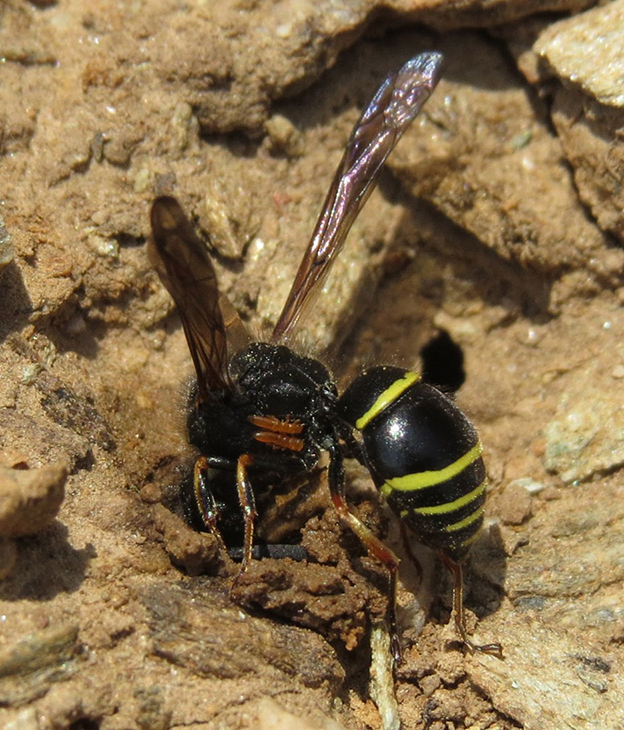 Once on a flower, surprisingly, triungulins cling to any passing insect, not just female bees of a suitable species. The two Black Oil Beetle triungulins in photo 5, for example, have attached themselves to a female mason wasp (Odynerus spinipes) which colllects beetle larvae for its young, a diet unsuitable for oil beetle larvae. Hitching a ride on a random insect may not be as pointless as it initially appears. If a triungulin dismounts at a flower away from its siblings, it is more likely to encounter a bee that is not already carrying another triungulin, thereby increasing its chances of being the only one arriving in a suitable nest. If it clings to a male bee of a compatible species, the triungulin can move across to the female during mating. If it attaches itself to a kleptoparasitic species of bee or fly intent on laying an egg in a fully stocked bee’s nest, the triungulin will have a head start over the unhatched young of the parasite, and so may be able to secure the nest for itself. But despite this range of possibilities, the vast majority of triungulins fail to find their way into a suitable nursery and are doomed to meet a sticky end. For the unfortunate triungulins that were trapped in resin 50 million years ago and which were recently discovered still clinging to their bee in their shared amber tomb, this was quite literally the case.

The lucky few that manage to reach suitable accommodation go on to start feeding, first on the bee’s egg and then on the provisions in the nest. As they grow they moult out of their louse-like skins and take on a more typical larval shape similar to a chafer grub, with a large, pale, soft body, short legs and strong jaws. They overwinter in the nest, and some species are known to over-winter twice before they emerge as adults. 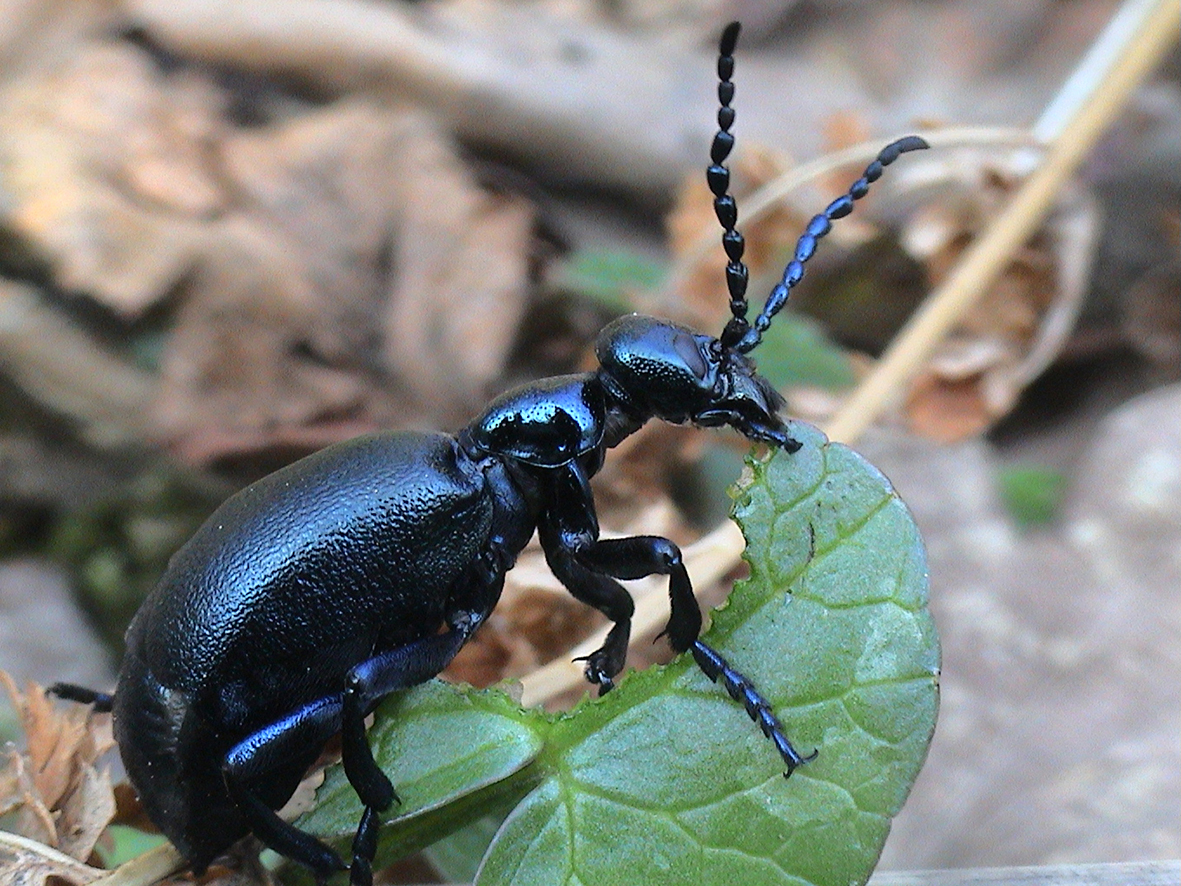 When the adult beetles first come to the surface, their abdomens are very small and hardly protrude from under the wing cases. It takes some days of energetic feeding for them to fill out and take on the typical oil beetle shape (photo 6, note the bite marks and the large portion of leaf already eaten). Lesser Celandine is a particular favourite for this purpose, but a wide range of other plants, including grass, are also eaten. 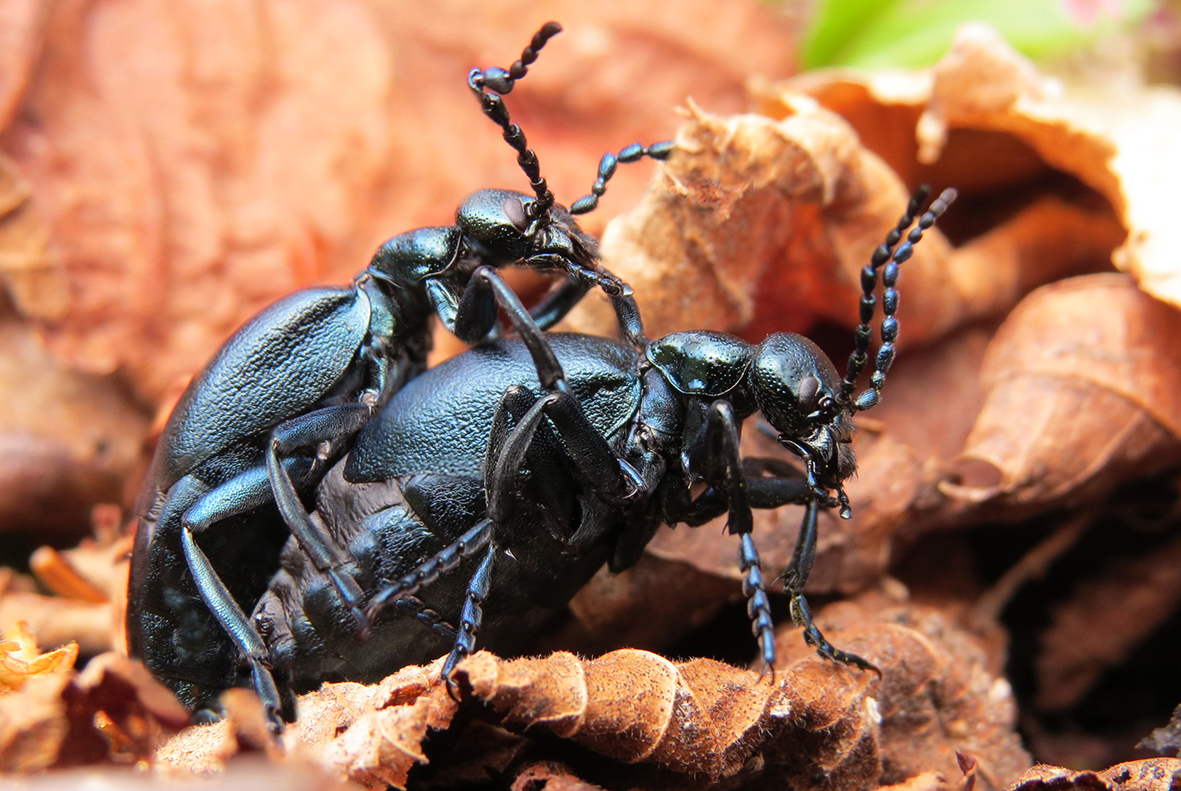 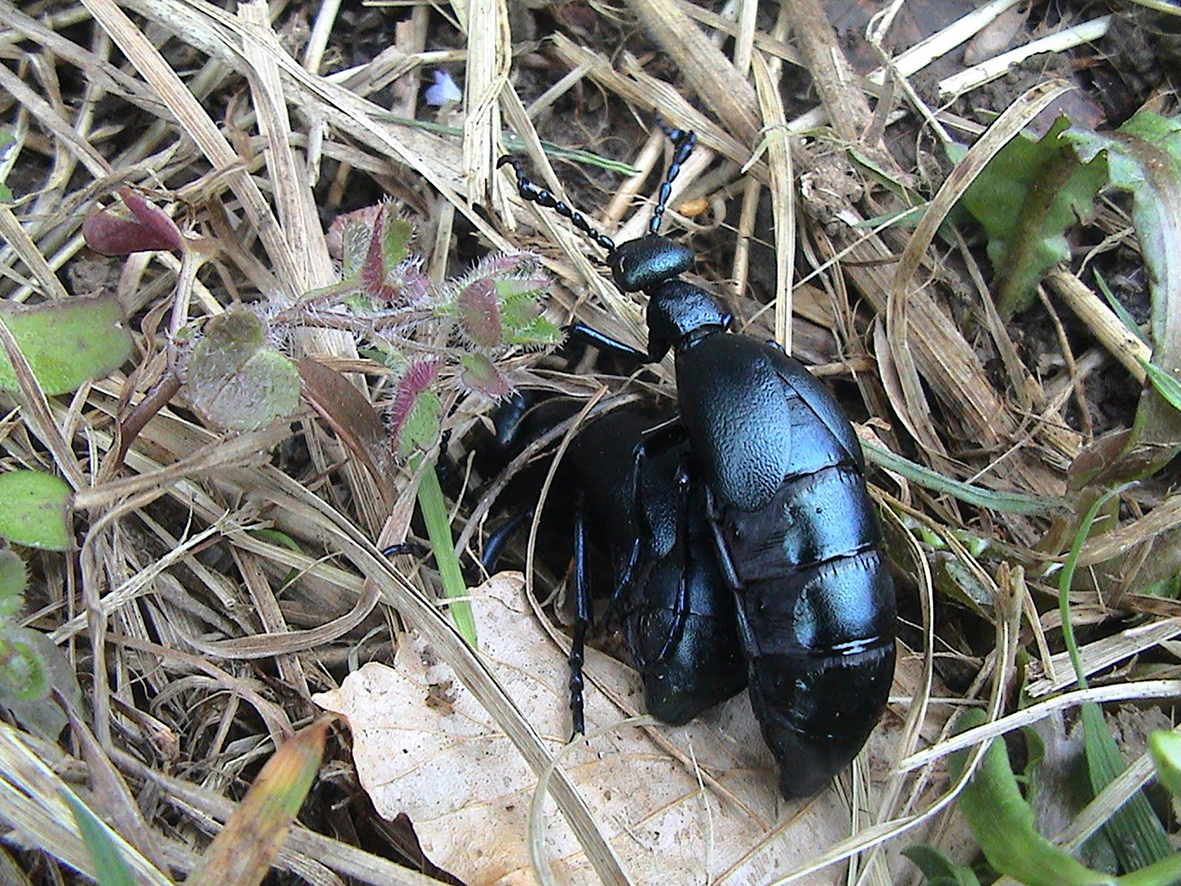 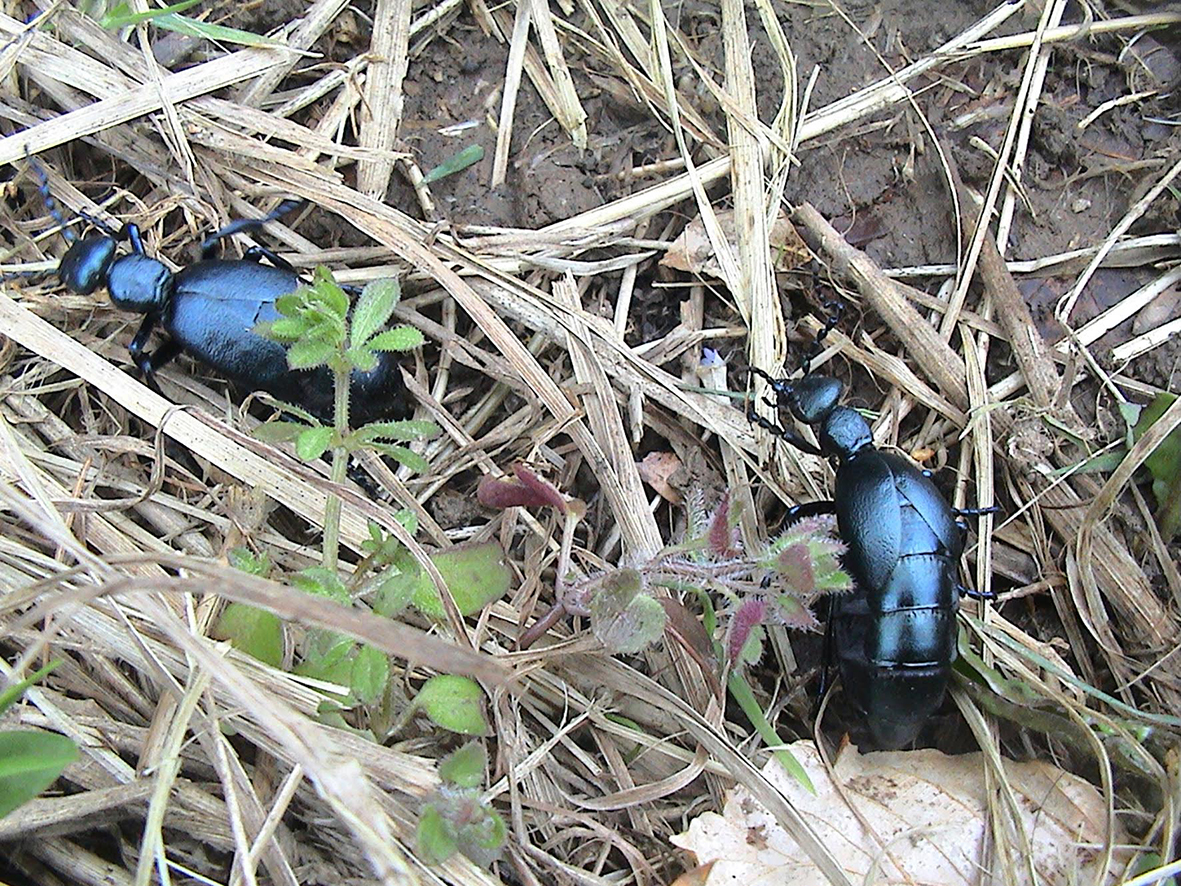 Male oil beetles are generally smaller than females and have a distinctive kink in their antennae, which is used to grasp the female’s antennae during courtship. If courtship is successful, mating ensues (photo 7). However, females are often still pestered by avid suitors when they are no longer interested in mating and are busy looking for places to dig their burrows (photo 8). These nuisance males are often quite literally given the brush-off, with the female purposely squeezing under low-growing vegetation, leaving the bewilder-ed male behind (photo 9). 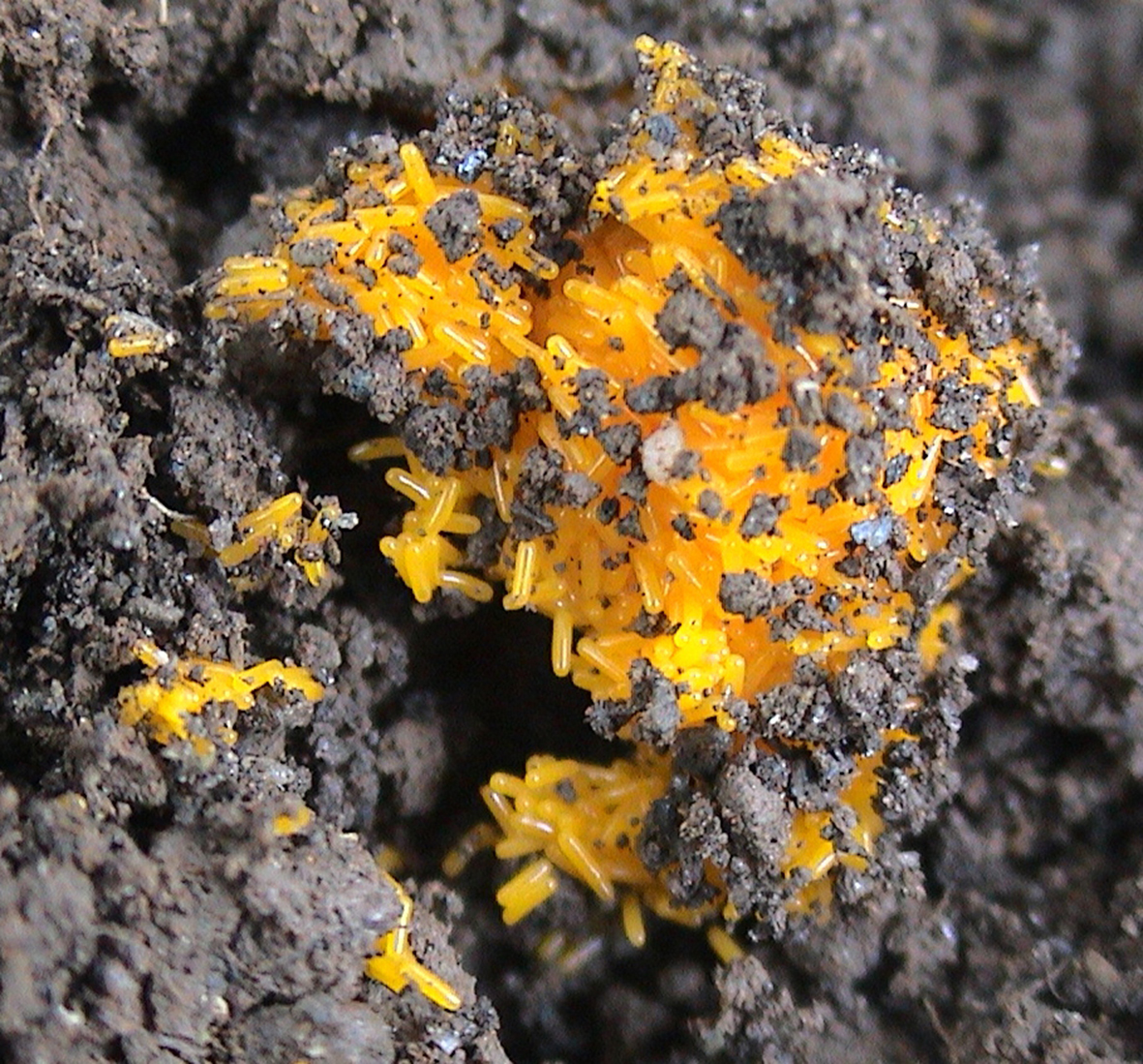 Females lay several large batches of eggs over a period of about two weeks, with each batch containing several thousand eggs (photo 10 below). It has been calculated that female oil beetles expend almost half their bodyweight on egg production. The Black Oil Beetle can lay up to 40 000 eggs in a lifetime. The Violet Oil Beetle produces slightly fewer as its eggs are somewhat bigger. 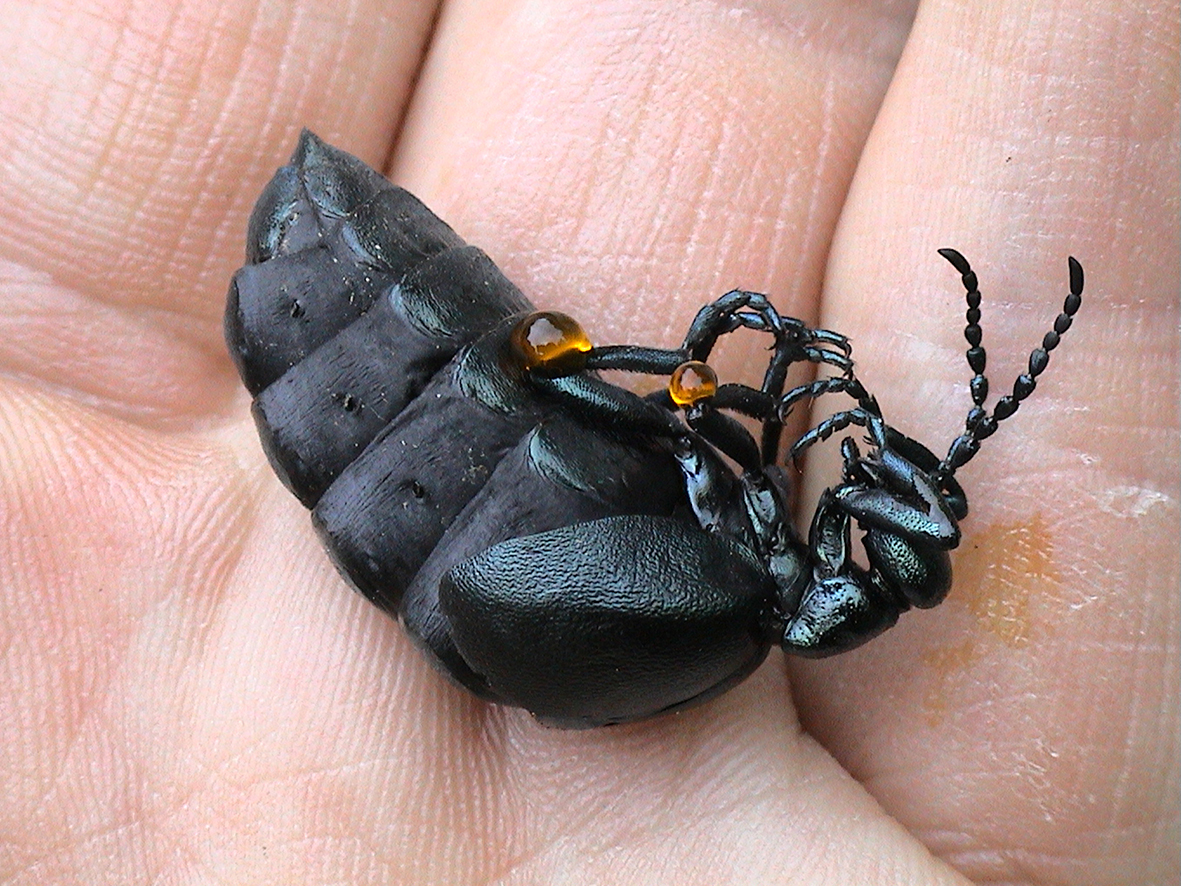 Oil beetle eggs contain the antifungal chemical cantharidin, which is distasteful to many predators. The body fluids of adult oil beetles also contain cantharidin, and when roughly handled, oil beetles produce small droplets of fluid from their joints, which gives rise to their common name (photo 11 above). If cantharidin is in prolonged contact with the skin it can cause blisters to form. Traditionally, ground-up oil beetles and a number of their cantharidin-producing relatives were used in medicine, both externally and internally. Cantharidin is a potent poison, and accidental poisonings used to be common with internal use. As a result of its irritating effect on the urinary tract, cantharidin has also been used as an aphrodisiac (usually extracted for this purpose from the oil beetle relative Lytta vesicatoria, inaccurately dubbed ‘Spanish Fly’), frequently with unintended side effects such as severe pain, bleeding or lasting impotence. 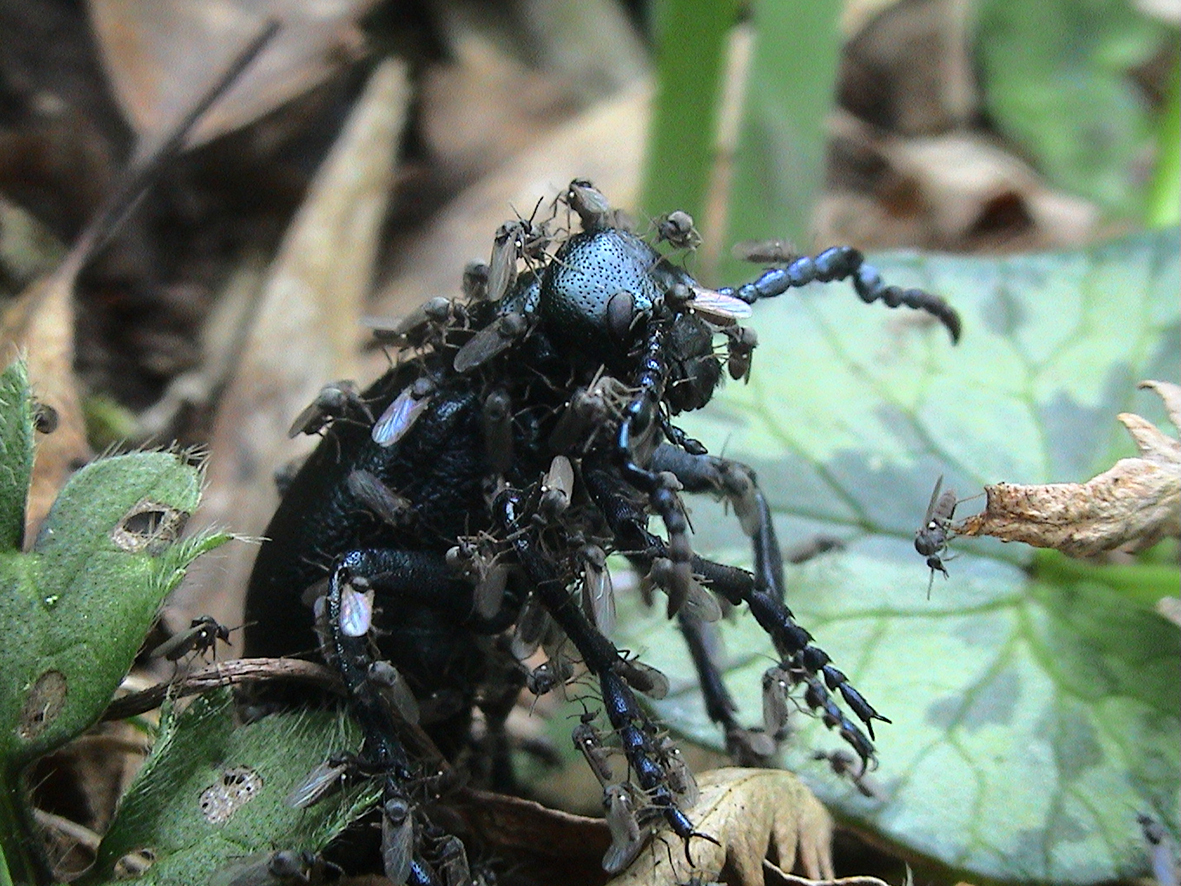 PHOTO 12 – Violet Oil Beetle with midges attracted by its cantharidin

Humans are not the only species which have been known to pursue oil beetles for their cantharidin. Certain species of biting midges are attracted to cantharidin and suck oil beetles’ body fluids in order to incorporate the chemical into their own tissues for protection (photo 12). In continental Europe, male cardinal beetles (Pyrochroa spp.) have been observed killing and eating the resident smaller oil beetle species in order to take in their cantharidin. Larger oil beetle species such as the Violet Oil Beetle in photo 13 are generally only bitten and licked. Male cardinal beetles have a special gland on their heads which allows the females to check how much cantharidin the male has managed to accumulate in his body prior to mating. The cantharidin is passed to the female in the male’s sperm during mating and is transferred into her eggs as protection from fungi and predators, so females will only mate with males which can provide her with good quantities of cantharidin. 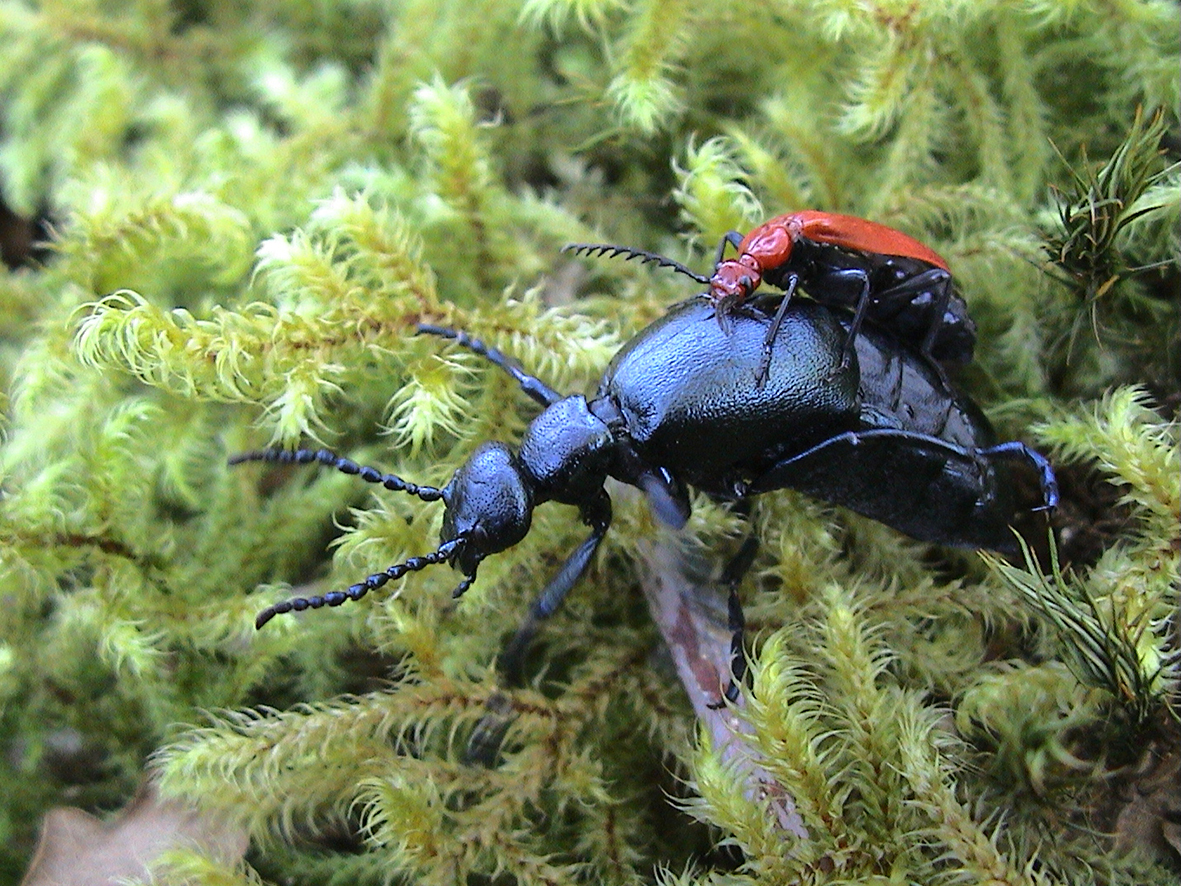 Of the five British oil beetle species, only the Black and Violet Oil Beetles are likely to be encountered without going through a lot of trouble. In fact, two of the remaining three species were considered extinct until they were rediscovered during the past decade. Even the Black and Violet Oil Beetles, although more frequently encountered in comparison, are rather local in their distribution and are absent from large parts of the country. On Gower we are lucky to have both species, with the Violet Oil Beetle the rarer of the two. The adults are difficult to tell apart in the field because, despite their names, both species appear black with varying amounts of metallic sheen. The shape of the base of the first thoracic segment is the main distinguishing feature, this bearing a slight indent in M. violaceus while being straight in M. proscarabaeus.

Despite their relative scarcity, finding oil beetles on Gower is surprisingly easy during spring, because they are active during the day and are often drawn to the firm, compacted soil of footpaths to dig their burrows in, a risky habit which costs many egg-laden females their lives. Those which successfully run the gauntlet of the walking boots will be the founders of the next generation of intrepid triungulins, some of which will, once again, overcome impossible odds to continue this ancient line of wondrous beetles.

A gallery of his artwork can be found on johnwalters.co.uk/paintings