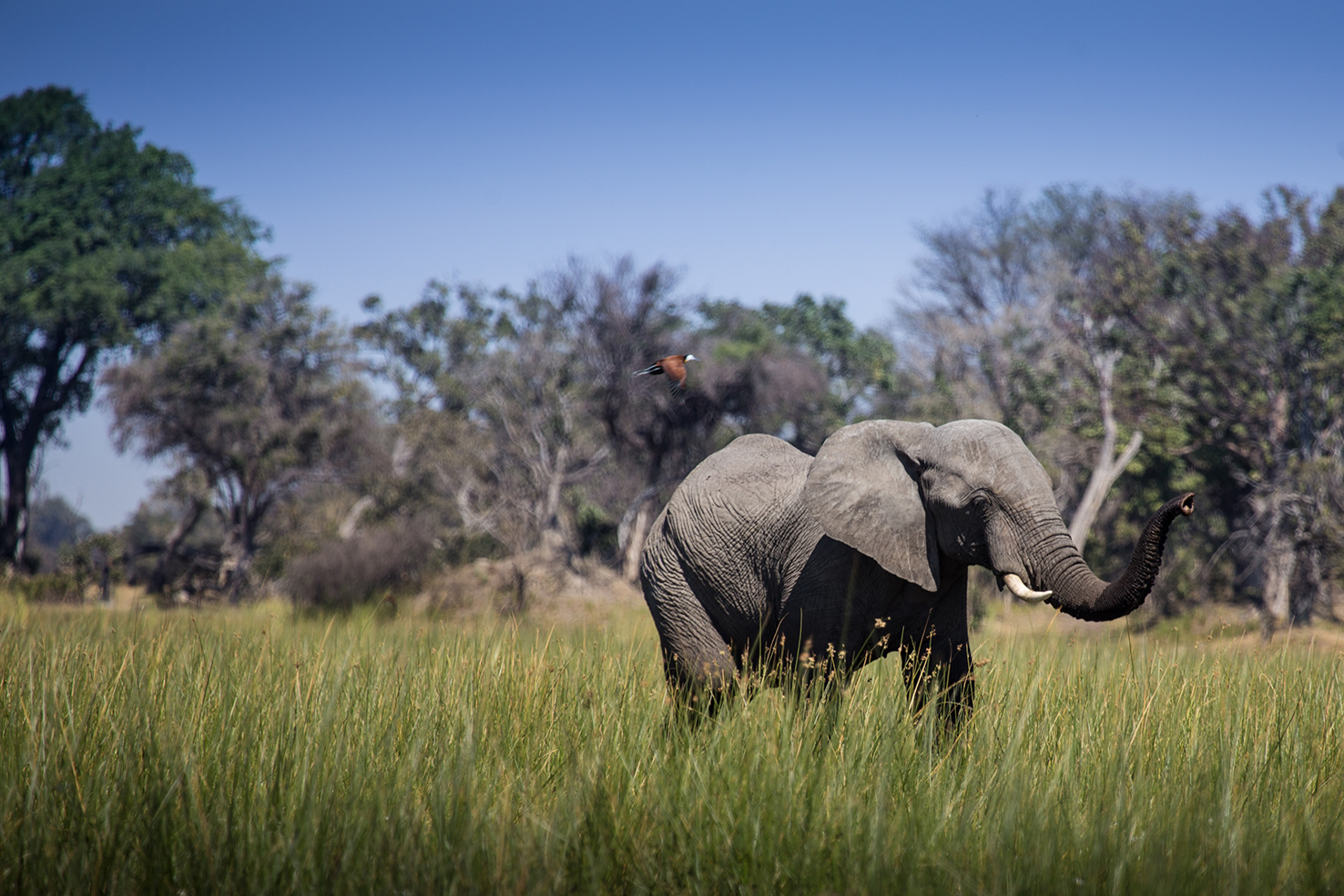 Botswana’s Okavango Delta is one of the last great wildernesses in Africa. Teeming with wildlife, the ‘Swamp’ is half the size of Wales and in the wet season is home to elephants and adventure. Bay’s Nick Smith travelled deep into the heart of the Dark Continent on assignment with the legendary photographer Yann Arthus-Bertrand… 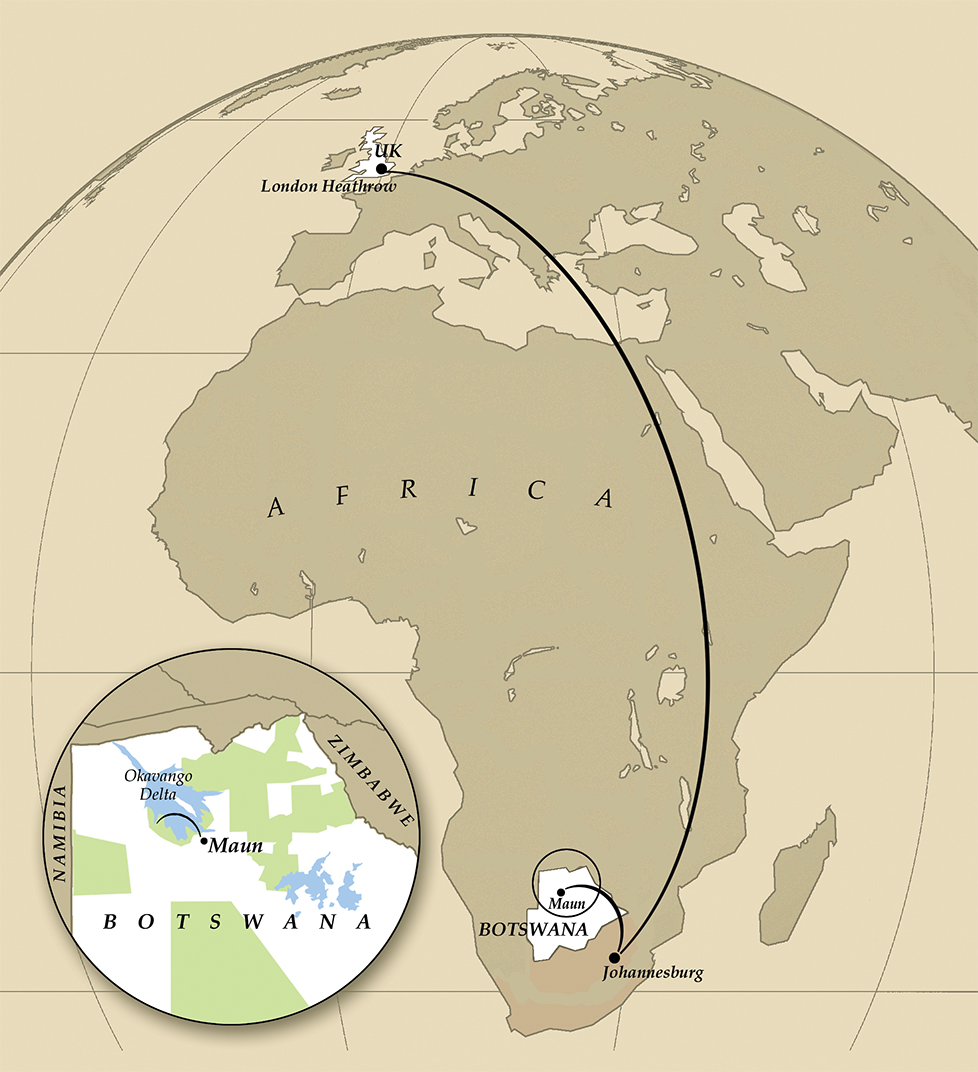 There’s no straightforward way of getting to Baboon Research Island, and neither is it easy to confirm you’re in the right place even when you think that you might have got there. The reason it’s so difficult to get to is simply that it’s far, far away, smack bang in the middle of nowhere. The reason you could miss it is, while there are plenty of baboons for sure, there’s no evidence of any research going. To cap it all, during the dry season, it’s not even an island. 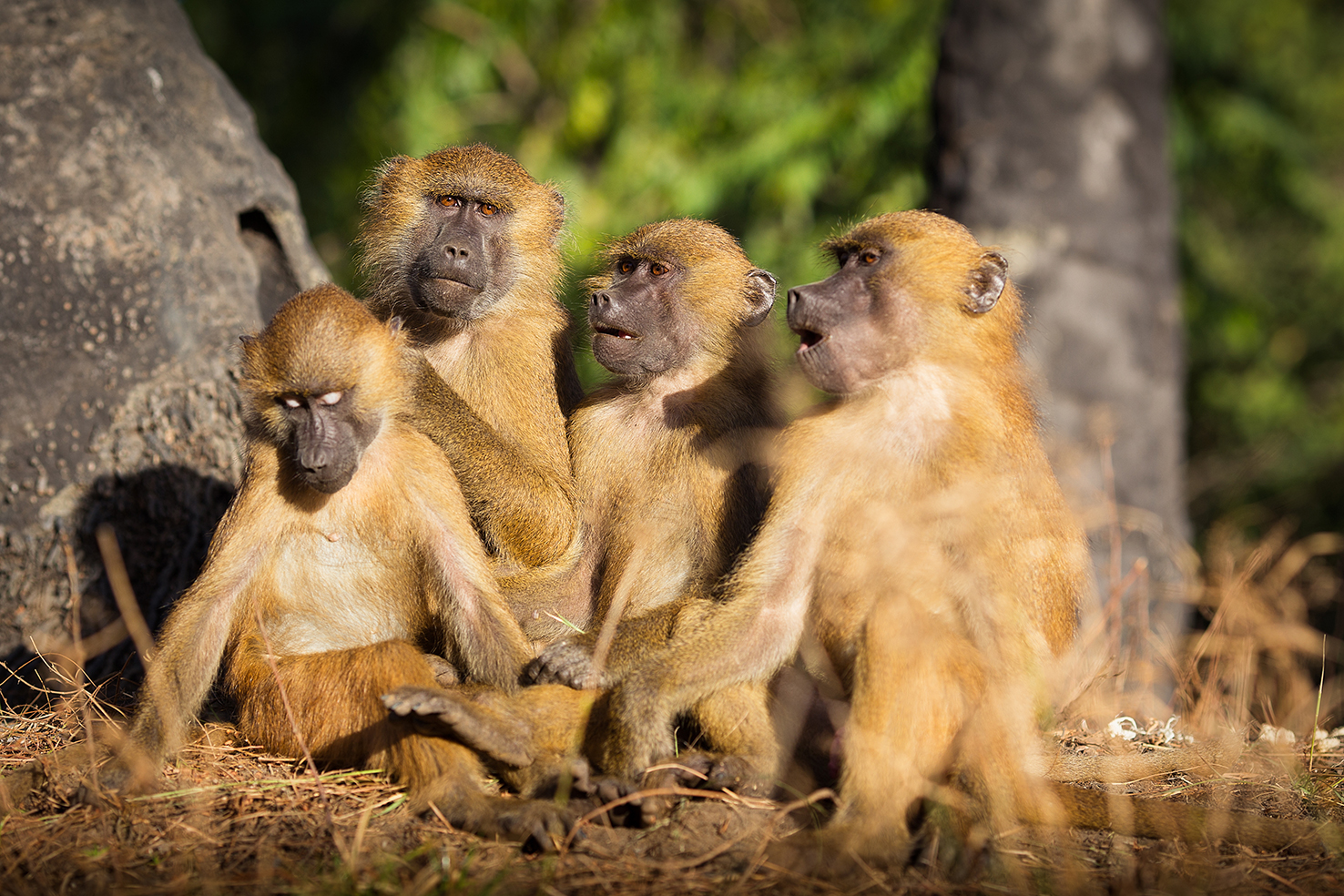 But this was my destination, deep in the Okavango Delta in the heartland of northern Botswana in that vast region of sub-Saharan Africa that the Victorians once named ‘the Dark Continent’. They called it dark not for any reason more obscure than, from their late 19th century standpoint, the enlightenment of Christianity had yet to cast its rays over a swathe of seasonal swamp that’s half the size of Wales. It still hasn’t, not for any lack of modern-day missionaries roaming around Africa, but for the rather more prosaic reason that no one has ever lived there. That is apart from our baboon researchers, who set up a temporary scientific field station there a few decades ago. And then they returned to whence they came, leaving the swamp to become one of the Seven Wonders of Africa, as well as UNESCO’s 1000th World Heritage Site. 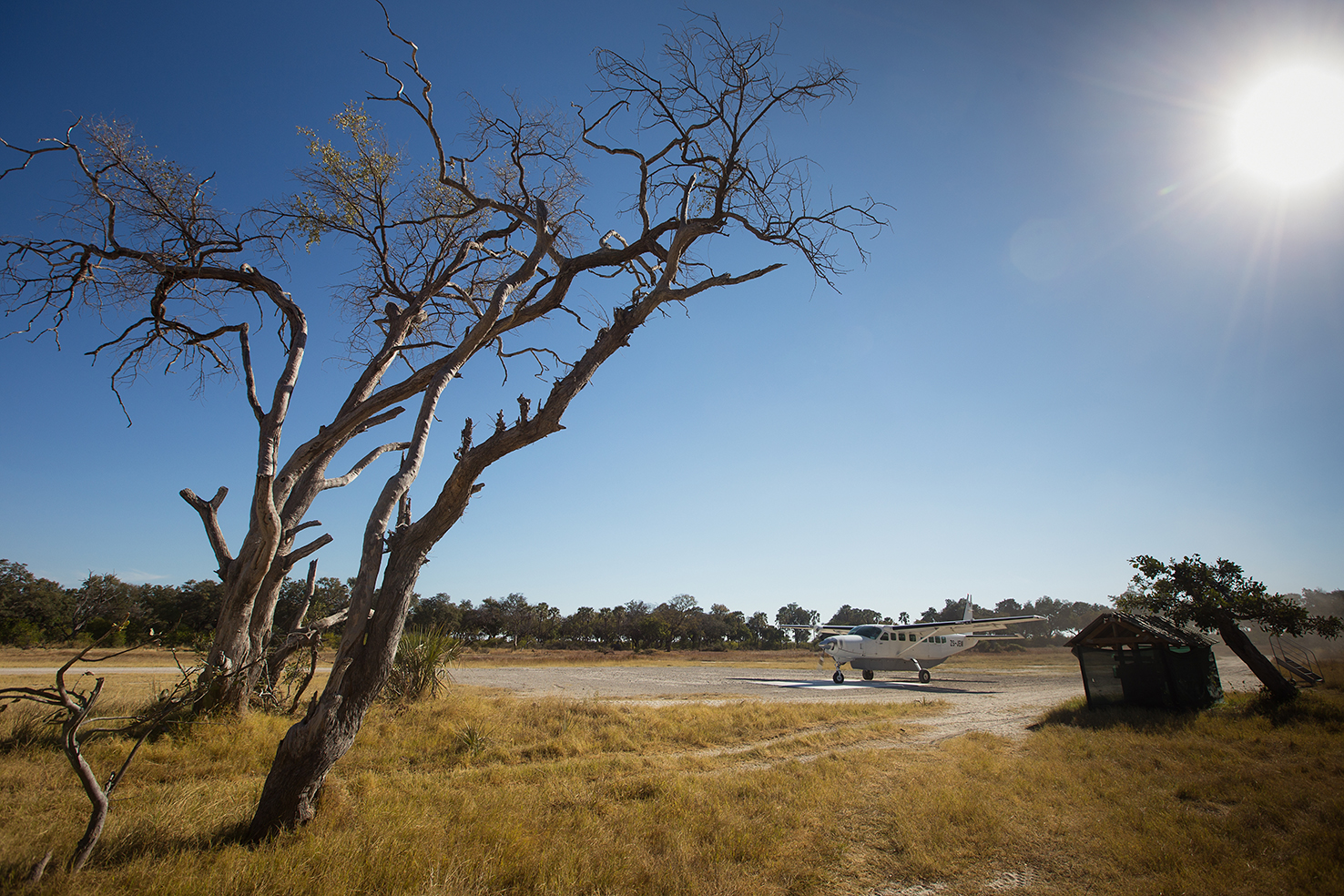 And so it was without a clear mental picture of where I was headed I boarded a plane from Heathrow and jetted overnight to Johannesburg, where I emerged in the early morning heat with a familiar feeling of dread.

Tambo International Airport is a place of no sweet memory for me, as on one of my previous trips to Botswana it was here I had my camera gear stolen by baggage handlers. It is also where the police couldn’t have given a damn about it, while back home my insurers cared even less. So I could hardly wait to board the 16-seater Cessna light aircraft and head for the small town of Maun in northern Botswana. Four bumpy hours later we made our descent to the pocket-handkerchief airfield, dodging in between low clouds and high eagles. Walking to the customs shack to get my passport stamped, I felt the heat rising off the tarmac like a blast furnace.

The deeper you travel into Africa the smaller the aircraft become, and my third plane in 24 hours was a 4-seater with a pronounced reluctance to get above 1000 feet. As we skimmed over the delta’s acacias and termite mounds, I could see through the porthole that the wet season had really started to kick in and the Okavango was full of water. For another hour we flew uncomfortably low, until we finally came down with yet another bump on a red earthen airstrip where we were met by the sounds and scents of the bush. And of course, baboons.

We unpacked the plane quickly and watched it fly off into the pale blue African sky, leaving us alone in the heart of the continent. Our guides ushered us into shallow-draft outboard motor boats that carved through the swamp to what was now to me at least, the mythical Baboon Research Island. The advance team had struck camp a few days before my arrival, and as they handed me a welcome bottle of ice-cold Kilimanjaro beer, there were handshakes all round, a few catch-up words with old friends, a bush barbecue and a few more beers.

Undisputed leader of the expedition was the great French aerial photographer and film director Yann Arthus-Bertrand, famous for his coffee table book ‘The Earth from the Air’ that still sells in its millions around the globe. His message is simple: this is the earth we live on, look after it carefully, because if we continue to destroy as we are currently, there will be nothing left for our children. Such is Yann’s influence that he can get in the room with kings, presidents and prime ministers to tell them that their environmental policies are a jumble of politically correct nonsense. And such is his force of character, they tend to listen. Yann was at Baboon Research Island to film an elephant segment for his documentary ‘Terra’ (that you can now watch on YouTube) in which he sets out to capture the most beautiful places on earth, with the frank intention of embarrassing the world’s leaders into doing something to protect them. 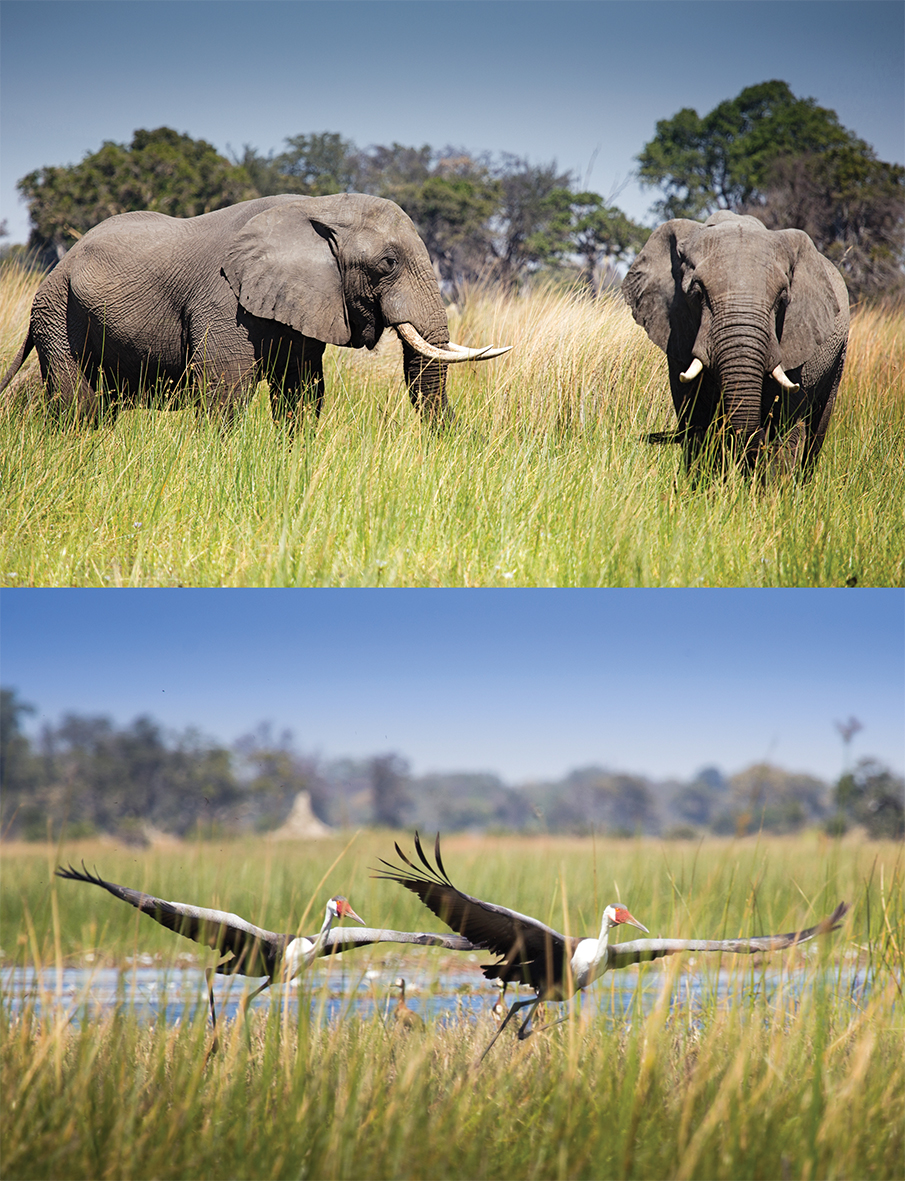 My job was to photograph Yann at work for the Daily Telegraph, and so it was really a question of shadowing the great man to see how he goes about things. But I also saw it as an opportunity to get some wildlife shots for my own portfolio, and since I’d never done any serious aerial photography before, when I got the call from the newspaper, it was a chance too good to pass up. There are many reasons to admire Yann, who I’d worked with previously in Sulawesi, but on my first morning at Baboon Research Island, the main one in my mind was simply that he had a helicopter. In fact, his team had three: the main filming unit, a back-up that was also used for air-to-air shots, and a medical evacuation unit in case anything went wrong. When things go wrong in the bush even the smallest of setbacks, such as a broken limb, can be catastrophic. The team medico explained to me that, as we were at least a day’s travel from anything approaching a rudimentary hospital, should you get bitten by a poisonous snake and go into anaphylaxis, your only chance of survival would be to take as many drugs as possible, hope that there’s a pilot to hand and believe in the power of prayer.

I can’t say I found myself dwelling too much on such trivia as I caught the whiff of fresh coffee brewing on the early morning campfire. Only a stone’s throw away, in the mist I just could pick out a pod of hippopotami huffing and puffing in a muddy pool, lazy crocodiles stretched out on the sandbanks, and a few curious elephants. Skimming across the water were jacarandas or ‘Jesus Birds’, so named for their apparent ability to walk on water. It was all a bit intoxicating, really. 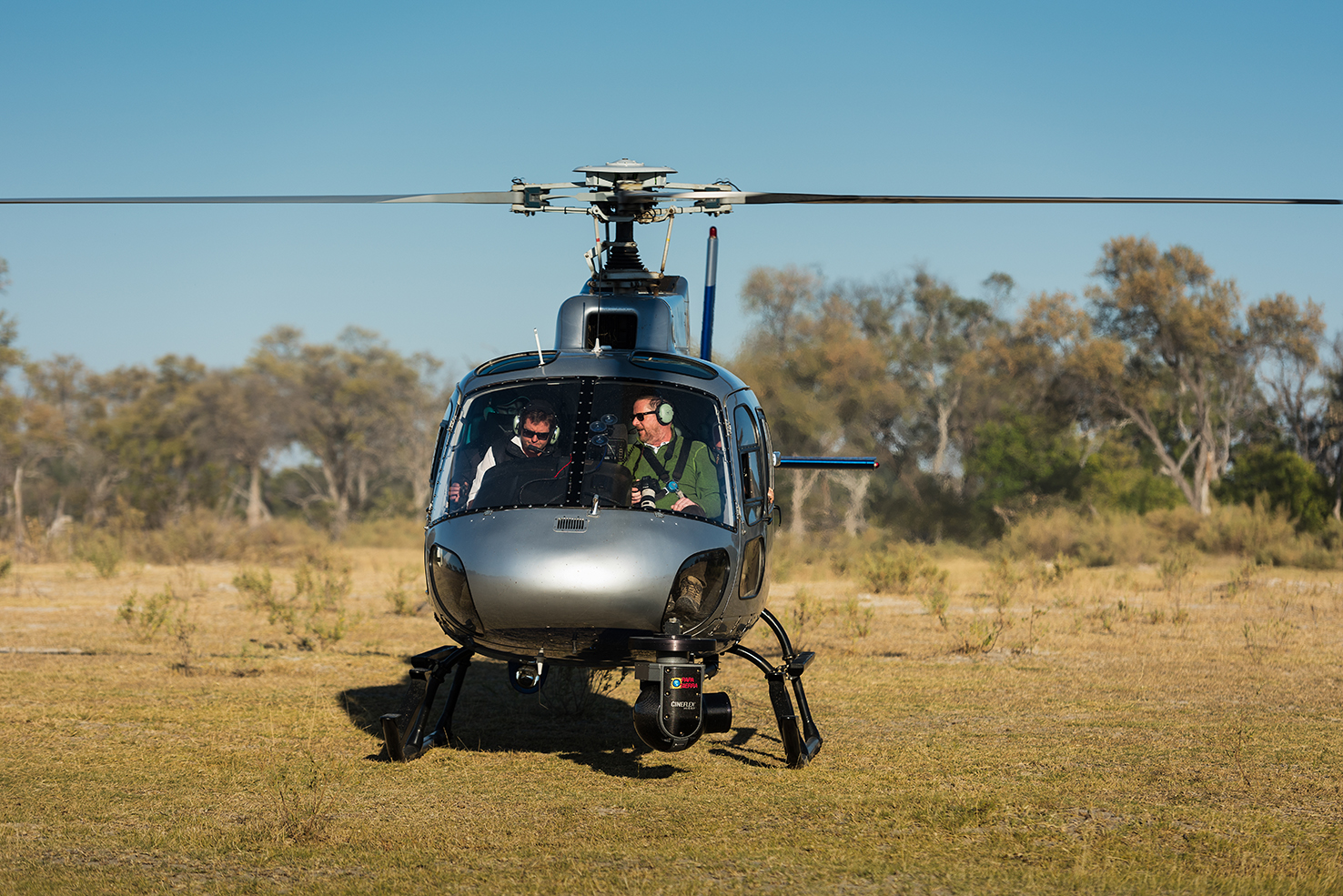 Then comes the call. Take-off is in ‘T minus 5’ and so it’s time to check the cameras and walk to the chopper Unit 1 where Yann is already waiting and eager to get to work. His AS350 Eurocopter has been modified to include a high-resolution Cine-flex camera mounted to a gimbal on the underside of the aircraft. These are the sort of cameras used in the aerial action sequences in James Bond movies and they cost half a million quid. A little lower down the technological totem pole, I was forced to content myself with my trusty and far less fancy digital single-lens reflex costing about a 250th of the price.

The first thing you notice about Yann’s helicopter is that no-one bothers to close the doors. A few minutes ago, I had been straining at the leash to get aloft, but as I jogged to the aircraft, instinctively stooping below the rotors,

I felt my eagerness for action taking a nosedive. Helicopters I can deal with. But the apparantly very real prospect of falling out of one into a crocodile-infested swamp had put something of a dent in my explorer’s spirit. I still can’t quite work out whether I drew comfort from, or was alarmed by the fact that Yann didn’t have a strap on his camera, much less around his body. But since the 70-something Frenchman was taking the whole thing in his stride, it was a bit too late for me to wimp out.

A few minutes later and we were buckled up and communicating through headsets. To anyone who has not had the experience of swooping over the Okavango Delta at low altitute in a helcopter with one of the world’s greatest photographers, I can only say that it is an unforgetable honour. This is when you can make sense of the tangled, seething mass of vegetation, the myriad water channels and the herds of wildebeest, giraffe and elephant. Below, there is a world so far away from that of cars, computers and cashpoints that your mind has trouble processing just how beautiful, ancient and elemental our planet is. 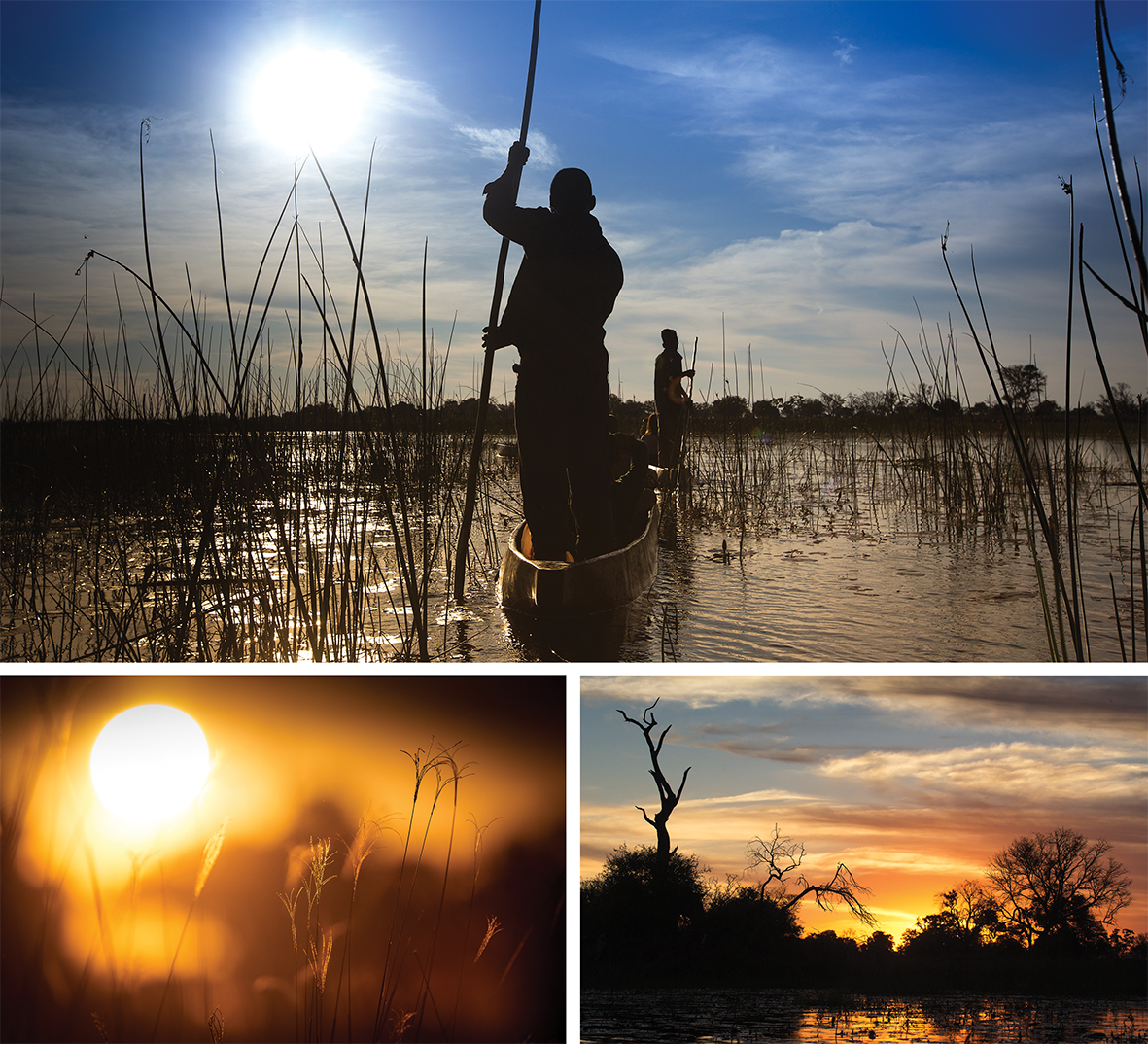 Golden morning light gives way to the intense brightness of the African day and filming is over until tomorrow. We use the time to back-up and review our digital work in a solar powered makeshift editing suite. As the heat starts to drain from the day, we go canoeing in traditional hollowed out boats called mokoro, and at dusk have an alarmingly close en-counter with a pod of increasingly grumpy hippos that won’t let us pass. I was later told by our guide Mike (who had a gun) that they were ‘only playing’, and yet as darkness descended, he thought enough in getting us back home safely. Seated at the evening campfire with a frosty beer or two, the tale of how we’d cheated a grim and certain death in the swamps of the Okavango became more and more dramatic with every telling. 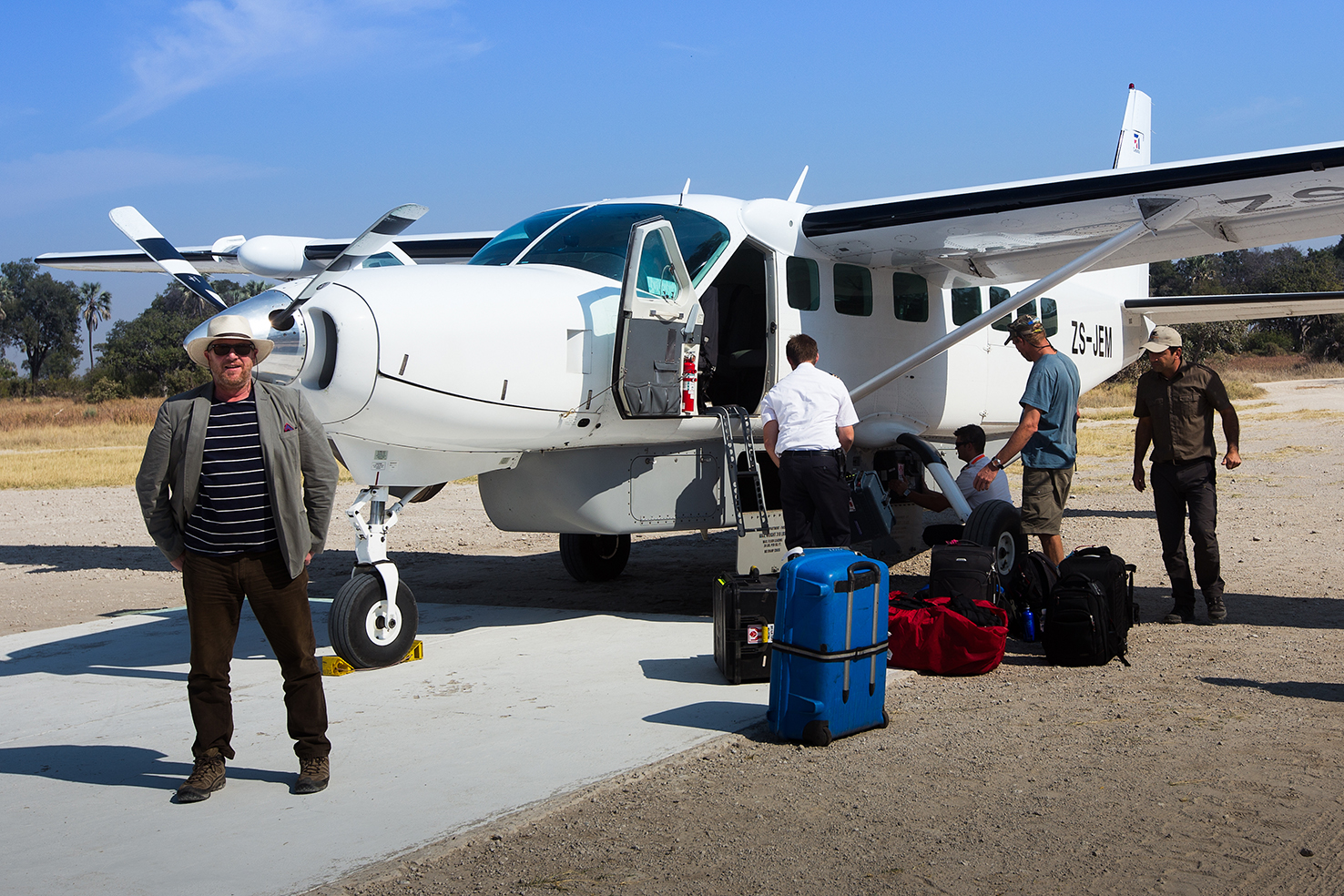 Nick Smith is a fellow of both the Royal Geographical Society and the Explorers Club. His latest book is ‘Travels in Search of a Photograph’.