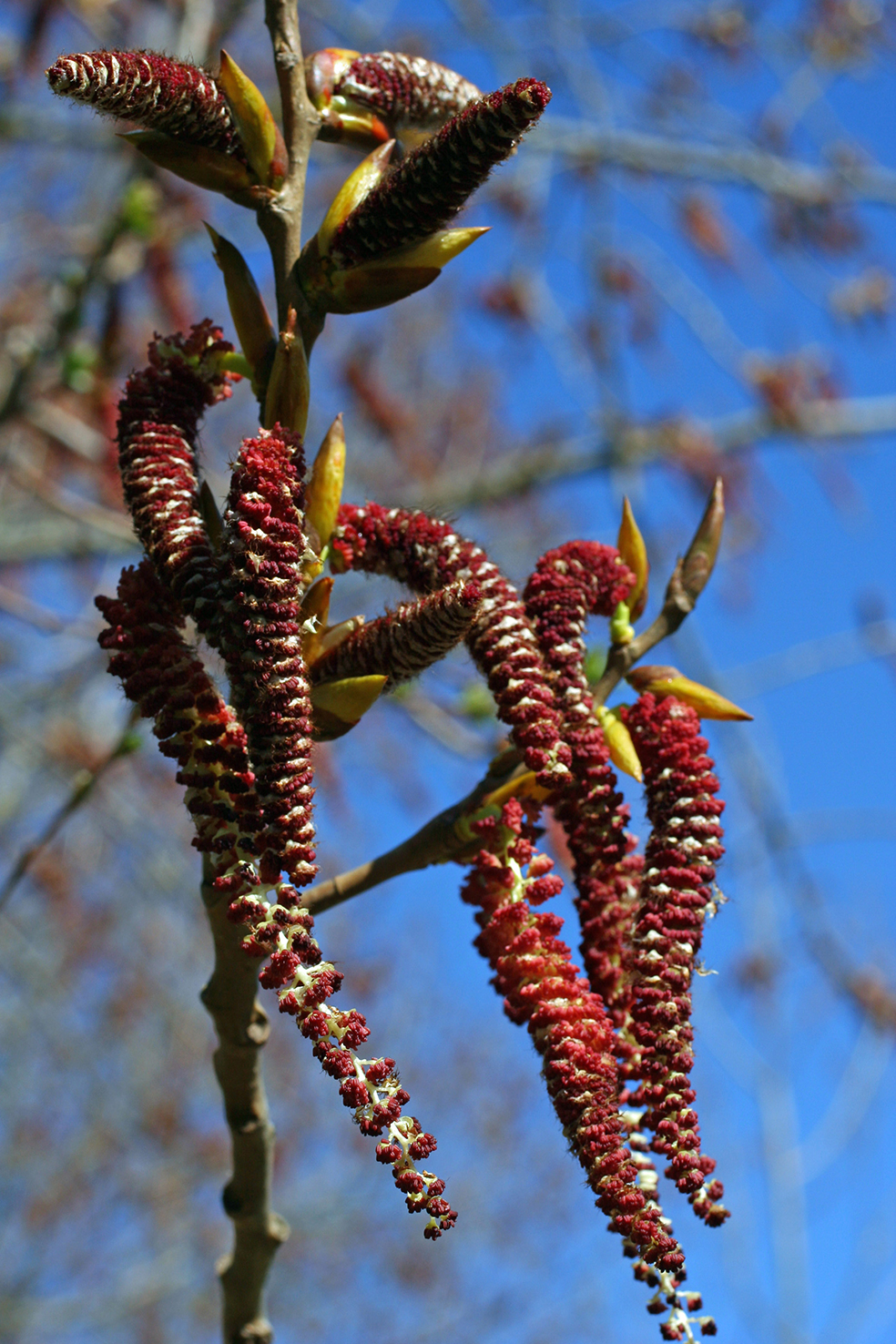 Poplars are among the first trees to come into flower, producing their elegant catkins (photo 1) in March, well before their leaves unfold. Because it happens high up in the canopy, the beautiful structures often go unnoticed until the spent male catkins collect on the ground under the tree, or the female catkins release their minute seeds embedded in downy fluff, sending their tiny offspring on a precarious journey.

Seeds are commonly thought of as resilient and able to survive for a long time in adverse conditions before successfully germinating and continuing their line. Poplar seeds, however, have virtually no in-built food reserves to sustain themselves and so they only remain viable for a few days. This ‘travelling light’ attitude allows them to spread further than if they were burdened by ample supplies, but it also means that if they fail to reach a suitable spot very quickly, they are doomed. A seed that manages to land on moist soil, ideally near a river or stream without too many other trees shading it, however, has potentially got it made. 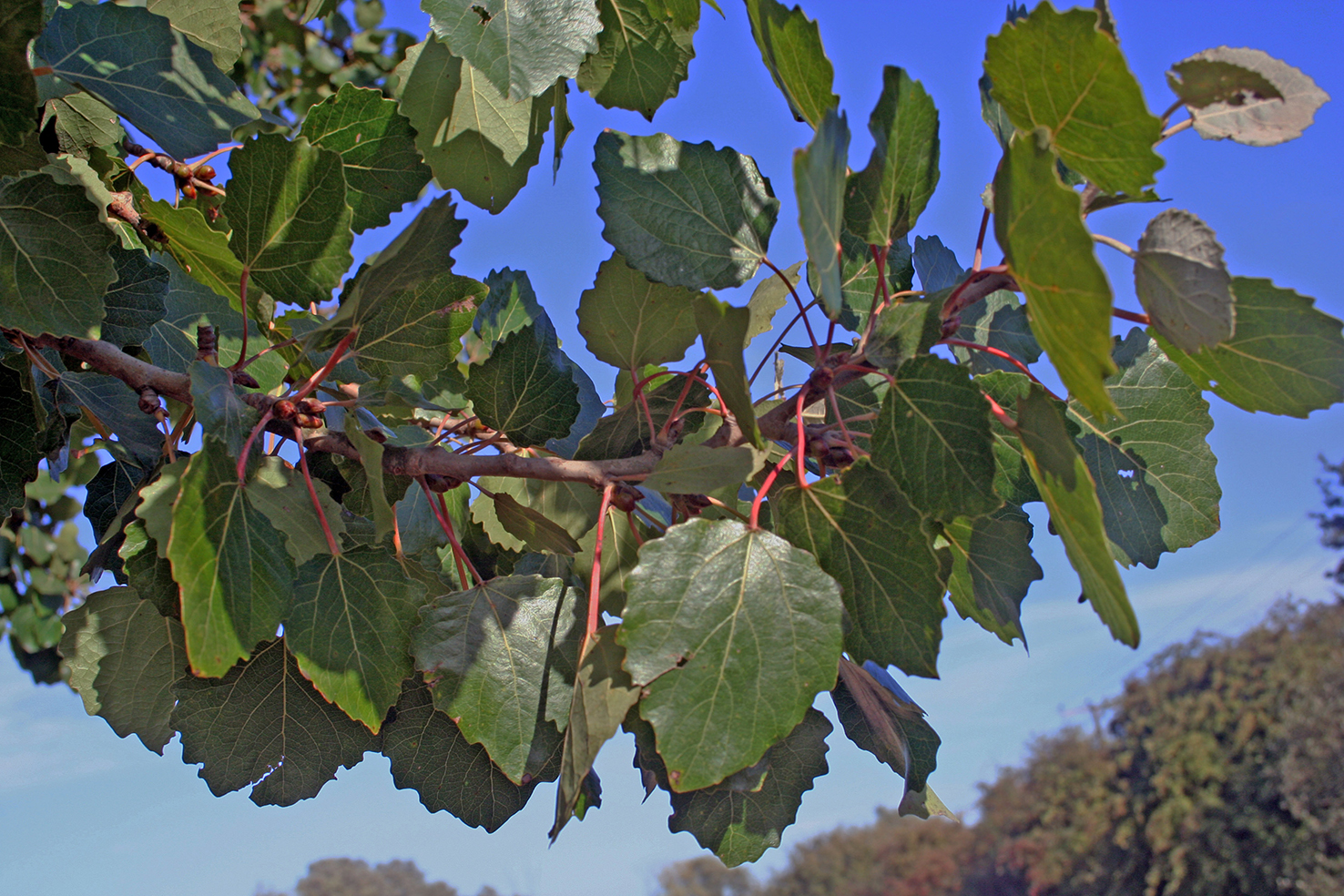 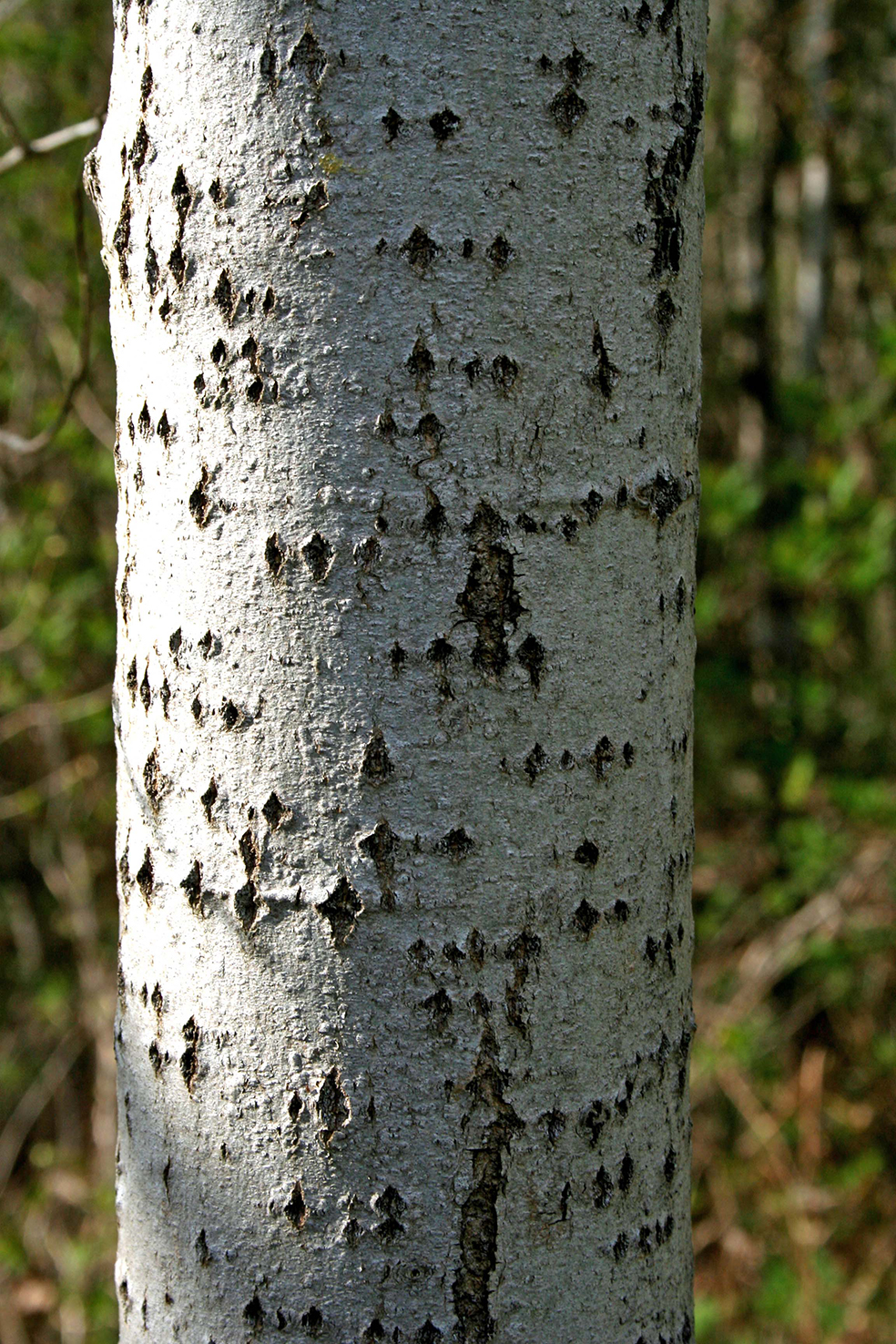 The Aspen (Populus tremula) – despite its common name also a poplar – is testament to the effectiveness of this seemingly high-risk method of dispersal, being one of the first tree species that made it back to Britain after the ice age. It is perhaps one of the easiest poplars to identify, with distinctive leaves (photo 2) combined with grey bark bearing diamond-shaped black marks (photo 3), which becomes darker and fissured with age. In common with other poplars, leaf shape can vary somewhat (in this case sucker leaves are a little more pointed and smoother edged than the canopy leaves in photo 2). The leaf stalks are laterally flattened, allowing the leaves to move back and forth easily with the slightest breeze, giving rise to its Latin name (‘Trembling Poplar’). This movement is so distinctive that sayings have been based on it, for example in German someone who is very afraid is said to be ‘trembling like Aspen leaves’. 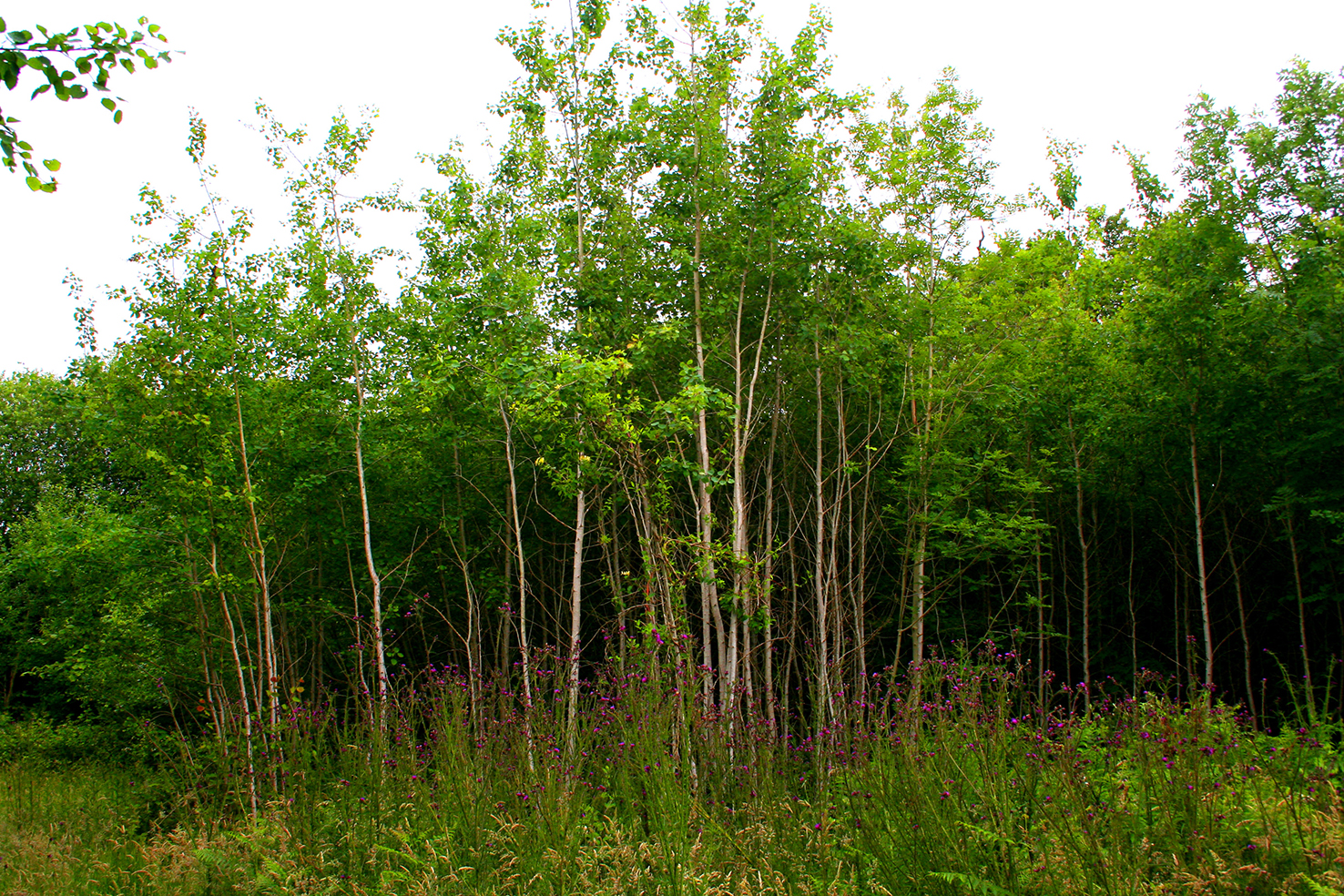 Aspen, in common with many other poplars, has an exceptionally vigorous root system and produces suckers freely, which can be quite a distance away from the mother plant. Aspens are not very long-lived trees and specimens more than 100 years old are rare, but due to the suck-ering habit an individual tree can survive in the form of its clones long after the original trunk has died. Some stands of Aspen clones in the UK similar to the one in photo 4 are thought to go back 10,000 years to immediately after the ice age, and a stand of the related Quaking Aspen (Populus tremuloides) in America is estimated to be 80,000 years old, ranking among the oldest living organisms in the world. 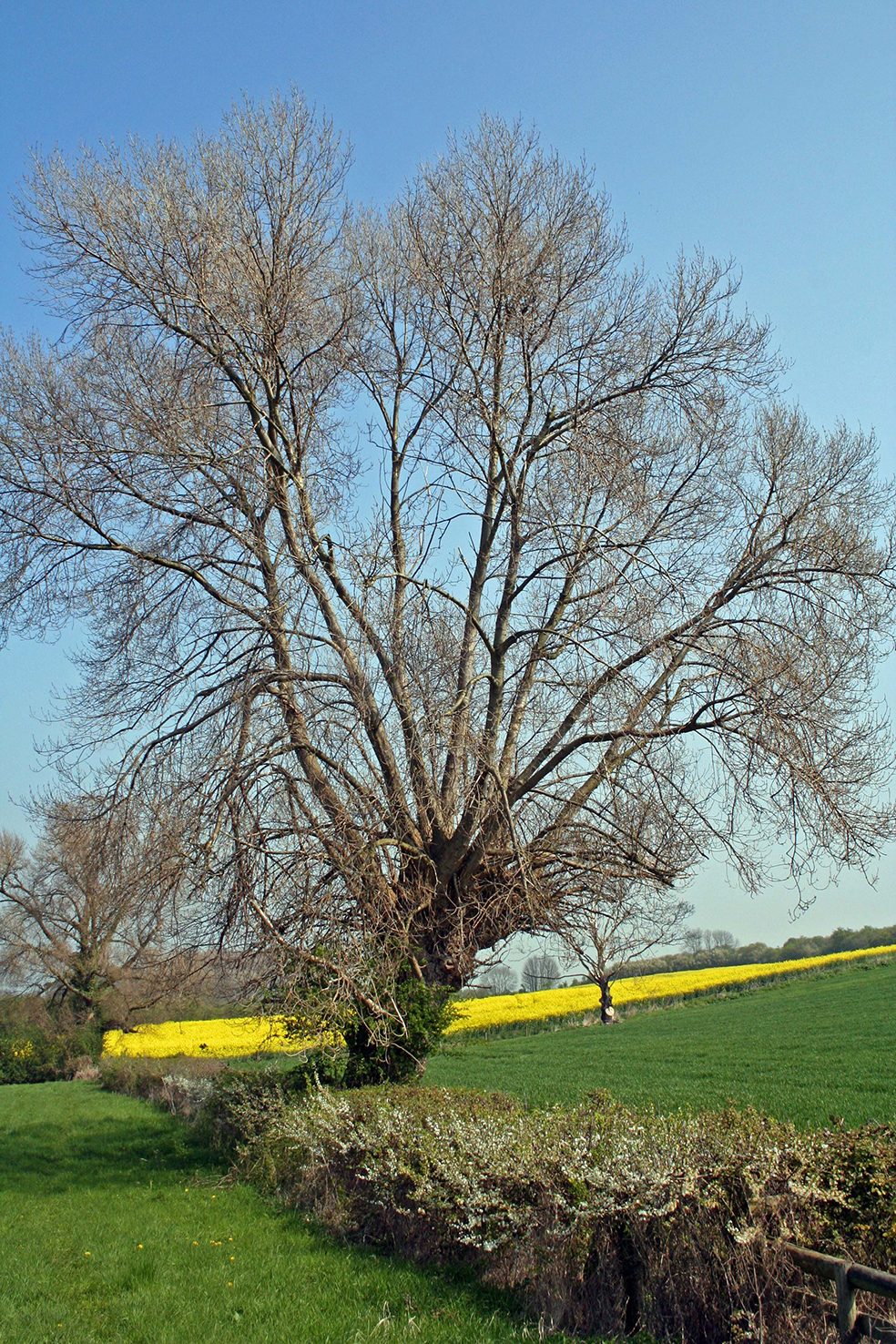 Britain’s second native poplar, the Black Poplar (Populus nigra), with its dark, deeply fissured bark and typical outline characterised by densely crowded upward-pointing twigs at the branch tips (photo 5), is much rarer today than it used to be, so much so that the Forestry Commission considers it Britain’s most endangered native timber tree. It requires very moist, bare, silty soils like those found on flood-plains for its seeds to become established, and many such suitable habitats have been drained and put to agricultural use. 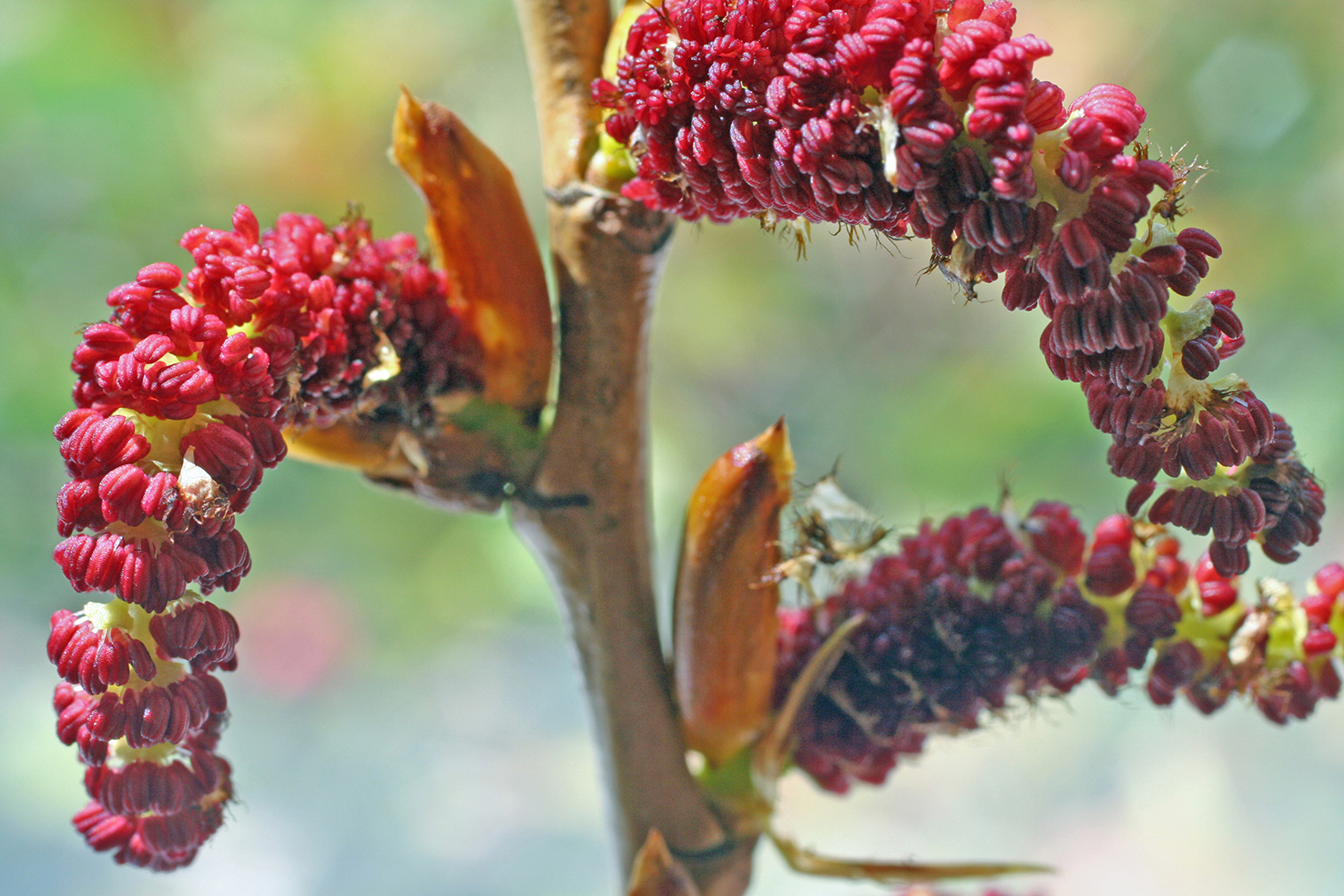 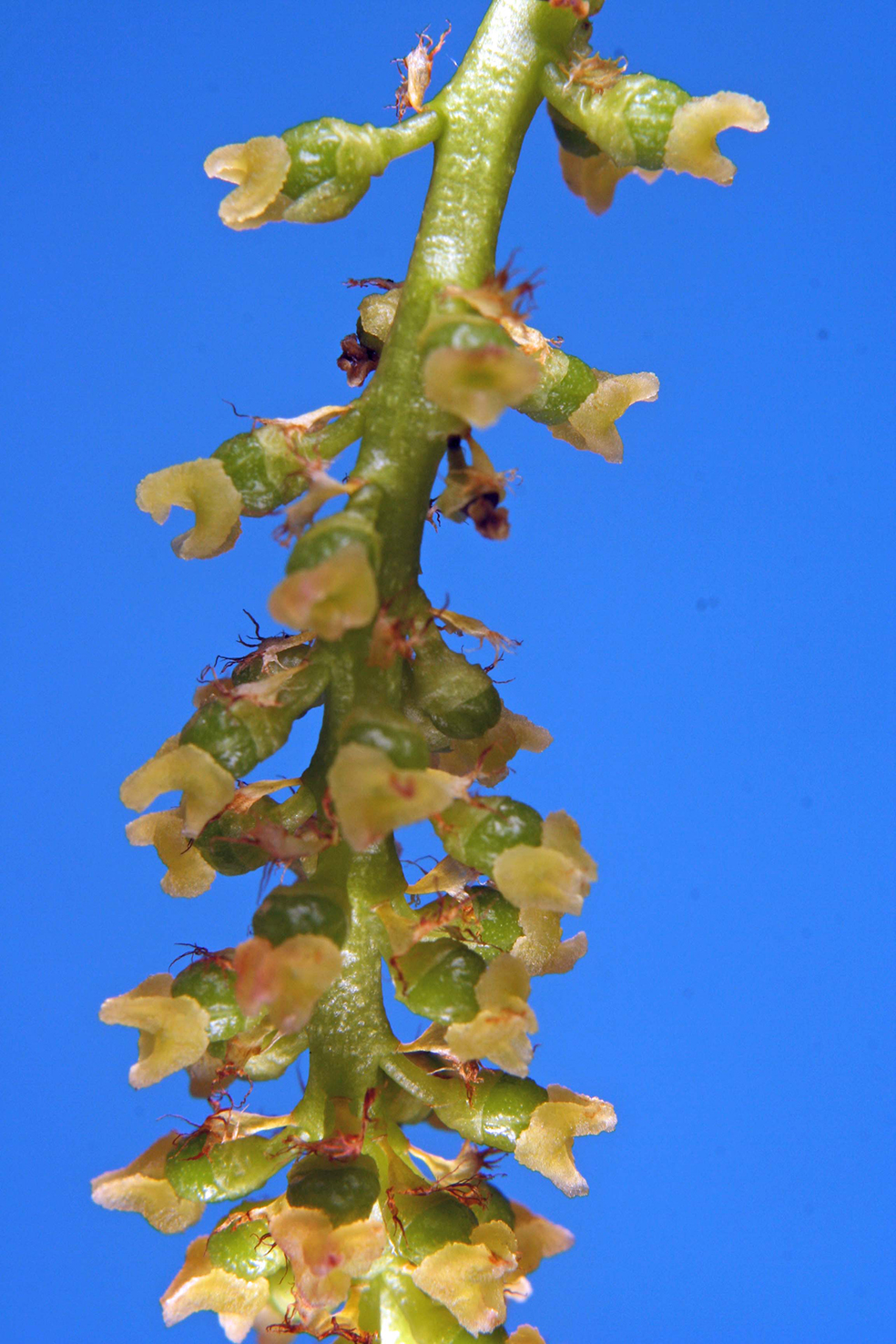 Another problem it faces is that, along with most other poplars, each Black Poplar tree produces either exclusively male (photo 6) or female (photo 7) flowers, and so at least two trees are required in close proximity to produce seed. When Black Poplars were planted in the past, preference used to be given to male trees because these do not produce any fluffy seeds which were regarded as a nuisance. This led to the current situation in which only around 5% of British Black Poplars are female. The decline of the Black Poplar is further aggravated by the fact that, like most poplars, Black Poplars interbreed readily with other poplars, notably the Hybrid Black Poplar (Populus x canadensis), which is widely planted and is itself a hybrid between the Black Poplar and the American Eastern Cottonwood (Populus deltoides). 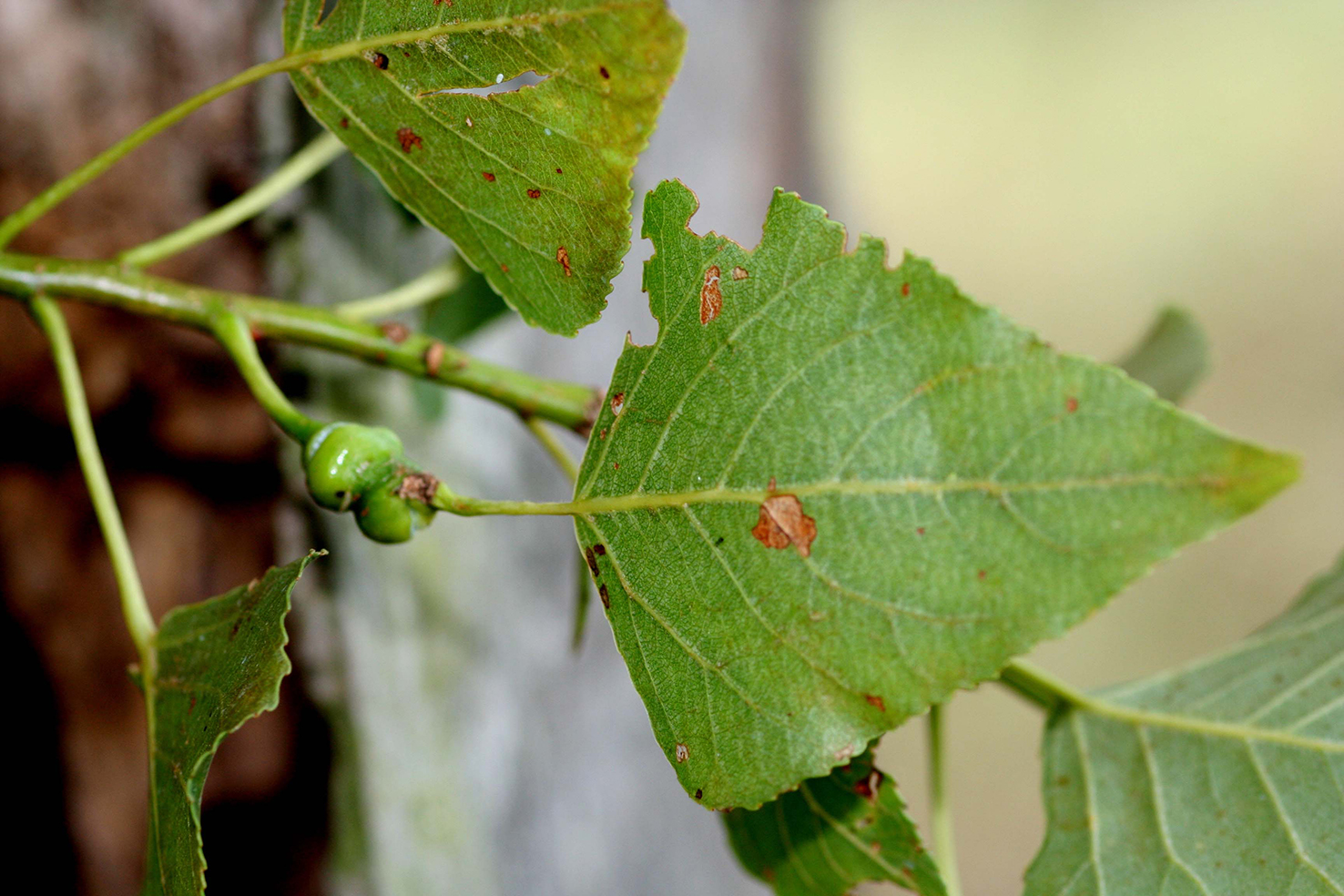 Efforts are being made to protect and replant Black Poplars to secure the future of this charismatic species and the invertebrates it supports, of which, in common with most poplars, there are many. Among these are aphids of the genus Pemphigus, which live inside galls, and some of which are highly dependent on Black Poplar. In the case of the Poplar Spiral Gall Aphid (Pemphigus spyrothecae), for example, it has been suggested that the presence of large numbers of the galls they trigger on the leaf stalks is a useful indicator in the identification of native Black Poplar (photo 8). These galls do not generally occur in high densities on the otherwise sometimes difficult to distinguish hybrids.

Some species of Pemphigus show very unusual behaviours and adaptations. In Pemphigus spyrothecae, for instance, there are individuals with particularly strong legs which attack any predator that makes its way into their gall by squeezing it with their legs and stabbing it with their mouthparts. These individuals frequently die in battle, and even the survivors often fail to breed as a result of their adaptation as ‘soldiers’, but having ensured the survival of their weaker breeding sisters with whom they share the gall, their genes are perpetuated via their siblings.

Contrary to many other poplars, the Black Poplar does not usually form suckers, instead it is able to regenerate exceptionally well, and it is not unusual for a fallen tree to re-root from its side and for a new vertical trunk to form in time. Equally, broken-off branches often re-root, for example when they get stuck in mud along a river. 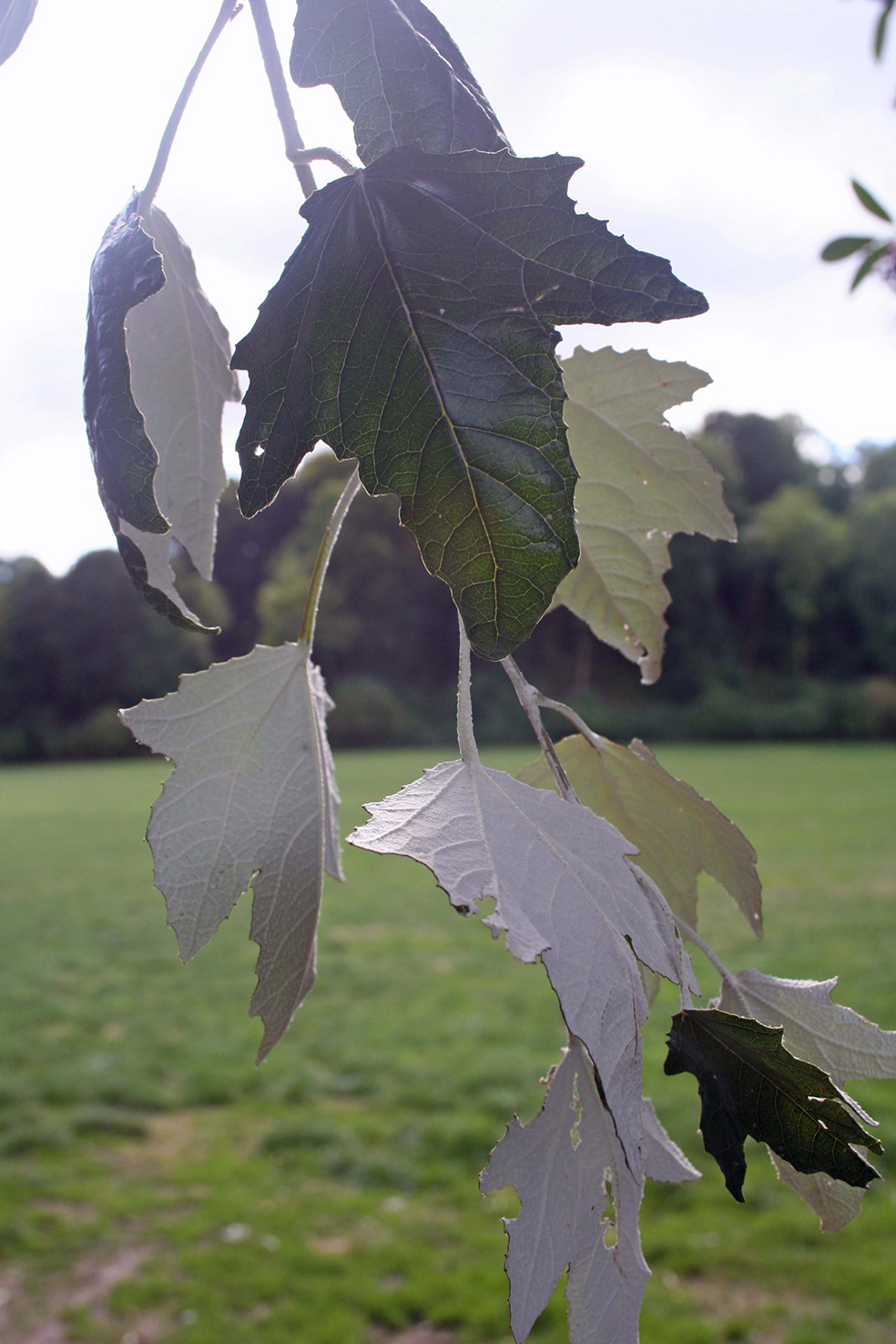 A third very attractive species of poplar, the White Poplar (Populus alba), though not strictly native, has been in Britain long enough for it to be regard-ed as naturalised. It is almost unmistakeable, possessing a bright white felty covering on the underside of each leaf (photo 9) which looks fantastic on breezy summer days, when entire trees can appear snowy white.

White Poplar bark is similar to that of Aspen, and winter identification is facilitated by the white felty covering of its buds and young twigs.

The only lookalike is the Grey Poplar (Populus x canescens), which is a hybrid between White Poplar and Aspen. The Grey Poplar is intermediate in appearance between its parents and can sometimes be difficult to distinguish, but once fully grown is much larger than either.

Poplar hybrids such as the Grey and Hybrid Black Poplars are often planted in prefer-ence to pure species because of their greater vigour. Poplars are among the fastest growing timber crops in the temperate region, and height gains of 1m per year are possible. The timber is soft, flexible and quite fire resistant, but not very weather resistant. Poplar wood is commonly used for paper production and matches, but it is also favoured for more prestigious purposes such as snowboard cores and Camembert cheese boxes.

Probably the most expensive and best looked after piece of poplar wood in the world today, however, is the poplar panel chosen by Leonardo da Vinci to paint his Mona Lisa onto!