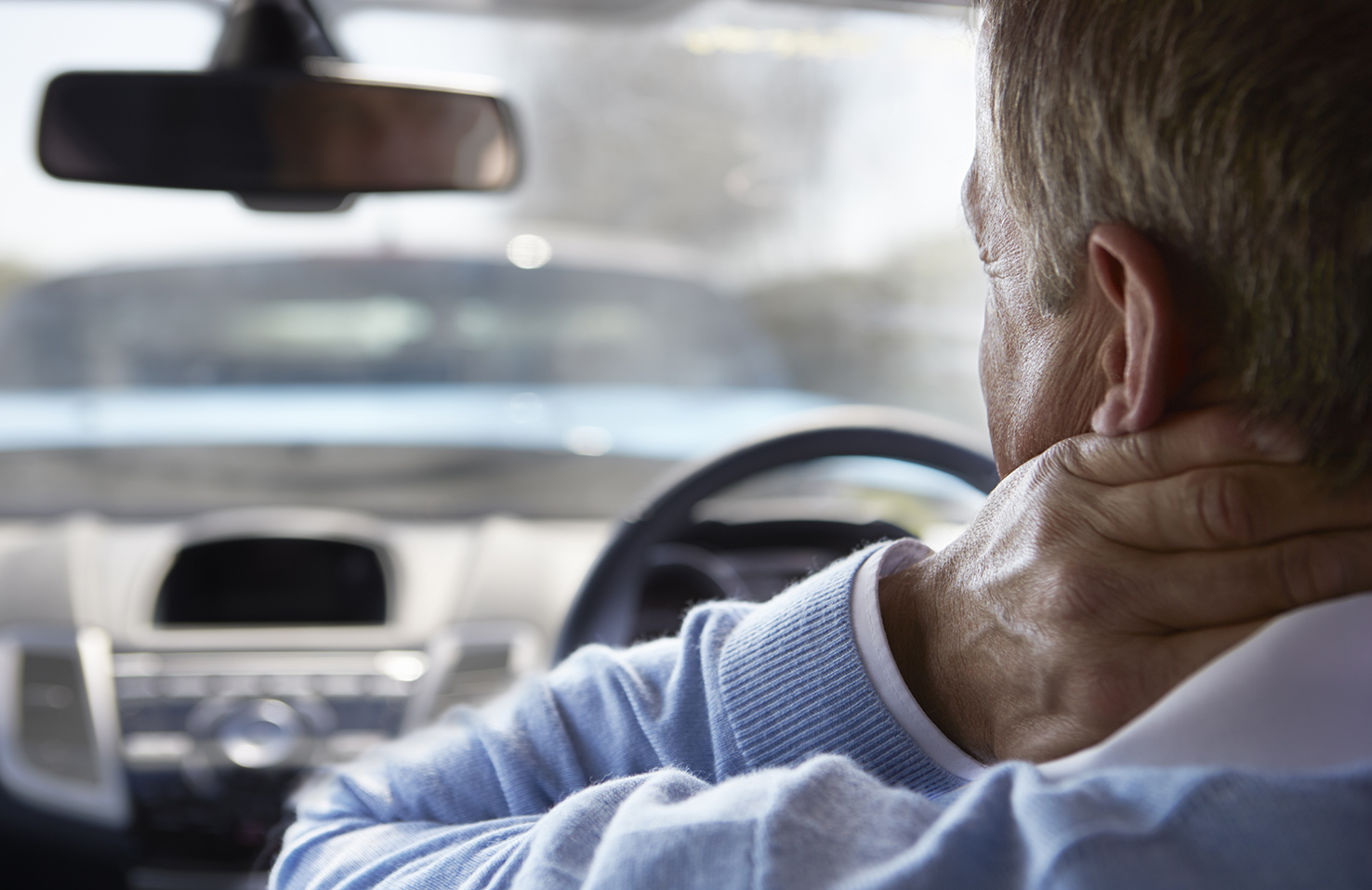 “Whiplash” refers to an injury involving the neck, when it has been subjected to a sudden flexion and extension mechanism. If a sudden forward-directed force is applied to a seat with an unsupported neck, the body accelerates suddenly forward, while the neck lags behind, causing the neck to extend. When the force stops, the body decelerates and the 3Kg weight of the head causes the neck to “overshoot” the body, resulting in excessive flexion. This sequence of motion is seen in a whip being cracked, but the effect can be exaggerated in humans because of the additional forces created by the head.

Whilst the original description of whiplash was in relation to the whip-like mechanism of an injury, there has been creepage, so that today the term “whiplash” is used to describe the neck pain experienced with a low velocity impact, typically a rear-shunt when driving a car.

Some people try to clarify the meaning of whiplash by describing either a “whiplash trauma”, which is the mechanism of an event, or else “whiplash injury” which relates to symptoms as a result of a whiplash trauma. To make life more complicated, a term called WAD or whiplash associated disorder is also frequently used to describe whiplash injury and these terms are used interchangeably. 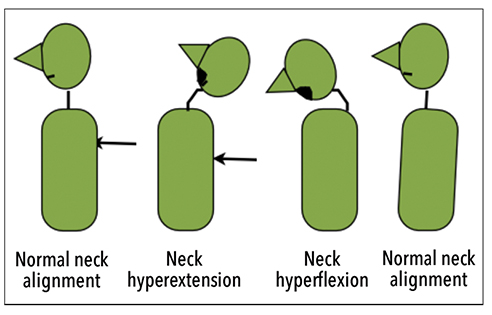 Whiplash trauma= the mechanism of a whiplash event.

The commonest symptoms relating to whiplash injuries are reported as follows-

Prognostically, the long term outcome of whiplash injury is usually very good, with most symptoms clearing up rapidly over days to weeks, but an estimated 5-10% of people have ongoing problems affecting their working lives. It is generally believed that if symptoms persist beyond two months, then they are likely to remain to some extent in the long term (there are reports of people’s symptoms improving over four years following a whiplash trauma, however). People who have severe neck pain initially also tend to develop chronic symptoms. There is a relationship between the WAD grade and time taken to recover from a whiplash injury.

The evidence points toward targeted exercise with regular supervision, instead of home-based exercise. The amount of exercise can gradually be increased as symptoms improve and can be helped along with simple over-the-counter painkillers.

Treatment is based on the symptoms, rather than a defined diagnosis, such as facet joint pain, or ligament strain, since these types of injuries are rarely detected on imaging including CT and MRI.

What are the risk factors for developing Whiplash symptoms?

One risk factor is related to the head rest position.

If the neck is unsupported, then it is able to extend more than if the head were resting against a head rest. If the stiffness of the seat is different to the stiffness of the headrest, then the load-transfer will not be equal when a force is applied to the seat, even when the head and body are both in good alignment and both supported. It’s worthwhile making sure that both the height of the headrest and the inclination are correct so that the body is in a normal alignment when sitting.

The next risk factor is related to the rigidity of the car bodywork. Ideally, the car should have as much shock-absorption in the front and rear as possible, in order to minimise movement of the car when an impact occurs. A decent crumple zone for a car is bad news for the car’s bodywork, but good news for the car’s occupants.

Unfortunately, people who are already suffering with neck pain, or conditions which can cause neck pain such as rheumatoid disease, are more likely to suffer with a whiplash injury following a rear-shunt car accident. Also, people who are prone to anxiety or depression are also at risk.

What about the Alar Ligaments in the neck- does damage to these cause the chronic pain of Whiplash symptoms?

There is convincing evidence to suggest that the alar ligaments at the very top of the neck bear the brunt of the force imparted on the neck during a whiplash trauma. Some researchers have demonstrated the ligament being injured on MRI. The clinical evidence is controversial, however, due to disagreement with interpreting the MRIs. The mathematical modeling data presents an attractive hypothesis for why some people develop long term neck pain as well as headaches. The alar ligament is a very strong pair of ligaments which help to attach the neck to the base of the skull. The ligaments are not easy to spot on MRI and often require specialised types of MRI imaging to assess the ligaments in detail. Even with close scrutiny of the ligaments, however, there can be disagreement in opinion (known as low inter-observer reliability) when assessing the same MRI images of the alar ligaments 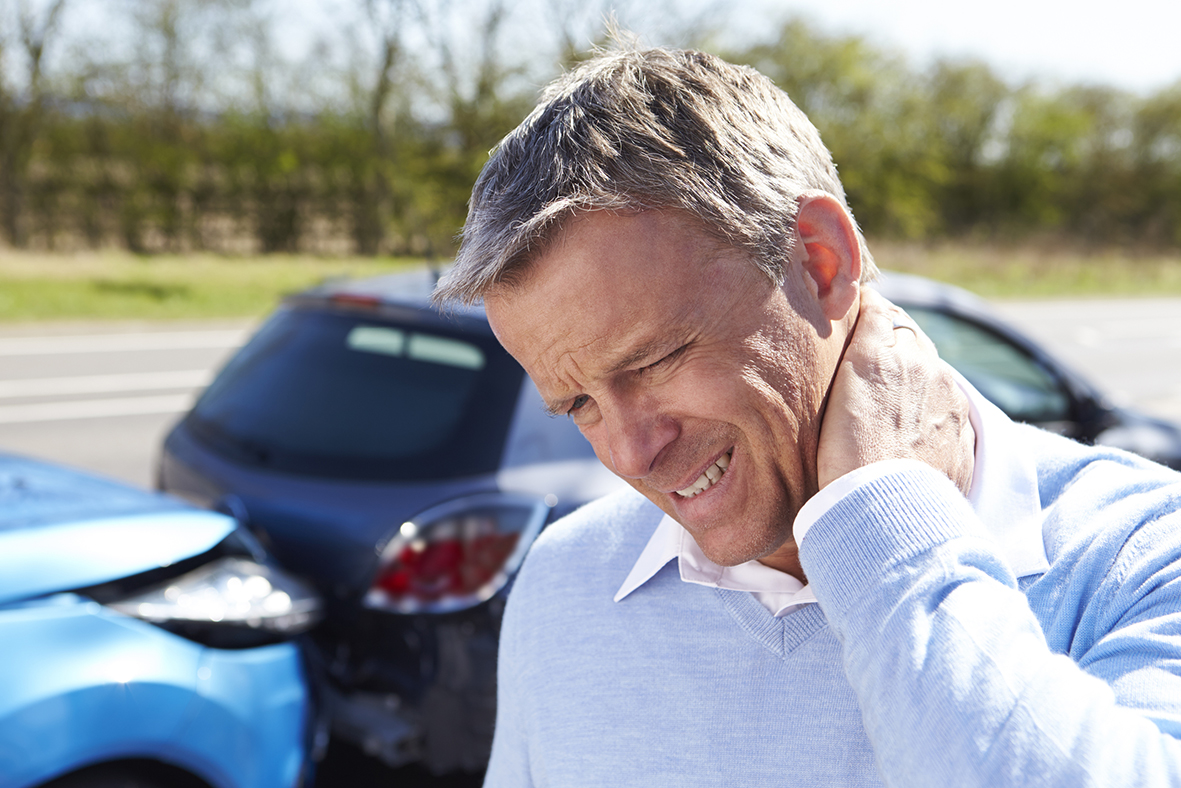 So, in summary, whiplash is a term used interchangeably with whiplash-associated-disorder (WAD) and is used to define the injury caused by a whiplash trauma. The whiplash trauma is an acceleration-deceleration mechanism in one direction, usually involving a motor vehicle rear-shunting another motor vehicle at low velocities. Most people involved in a whiplash trauma experience short-lived neck stiffness and pain, with a minority of people going on to develop long-term symptoms. There are no specific tests which can prove a whiplash injury and there is no evidence to show that resting the neck helps the situation. On the other hand, there is evidence to show that supervised exercise following a detailed clinical evaluation tends to improve the rate of recov-ery. For those people who develop vertigo as part of the whiplash injury, the symptom can possibly be easily remedied by a corrective manoeuvre called the Epley manoeuvre. A hearing test is recommended if hearing problems are experienced with a whiplash injury. Any psychologic issues experienced due to a whiplash trauma should be treated in conjuncttion with the pain or physical disability experienced.

Finally, all are in agreement that there is a lot of research needed to try and understand why so many people suffer with whiplash injuries following seemingly minor road traffic accidents, in a bit to reduce the burden of suffering, as well as reduce the economic implications of employment, medical treatment, insurance premiums and litigation.

The evidence directs us away from resting the neck and toward supervised exercise. The injured person needs to be assessed by a medical expert in the first instance, in order to make sure that there are no injures requiring further investigation and that it is safe to proceed with exercises. There is no evidence to show that either rest of neck supports help recovery from a whiplash injury.

There are many different health professionals who offer help with whiplash-related pain, including chiropractors, osteopaths and physiotherapists. It appears that the best recovery is achieved when the person suffering with pain relates well with a single health professional and has continuity of care while following a prescribed exercise regime.

Pain killers can be either taken by mouth as medi-cations, or applied to the painful area topically.

For tablet painkillers, firstly, make sure that you are able to take any type of painkiller. Some people with asthma cannot take anti-inflammatories, or NSAIDs, for example, as well as people with a history of stomach ulcers or advanced kidney disease.

Most people can use paracetamol as a basic pain killer. Taken regularly at the recommended dosage as stated on the packaging, this medication can be effective for mild to moderate pain. If more pain relief is needed, then a low dose morphine-based tablet such as codeine phosphate could be added to the paracetamol, but be aware of constipation as a common side effect of morphine-based medication. A non-steroidal anti-inflammatory such as ibuprofen could also be added to both the paracetamol and codeine for treating moderate to severe pain in the short term. If you feel that all three types of pain killers are required to try and control your pain, you should discuss this with your GP.

As a rule of thumb, pain can be scored on a scale from 0 to 10. This is called a visual analogue score, or VAS. 0 represents zero pain and 10 represents the worst pain imaginable. In general, a VAS of 7 and upwards is regarded as severe pain and this should be addressed by a doctor.

This is not a comprehensive list of symptoms that require medical attention and if you are concerned about any symptoms relating to a whiplash injury, you should seek medical help from your doctor.

Progressive numbness or pins and needles ie. either spreading distribution or increasing intensity

“Heavy head” ie. feel the need to physically hold the head as it feels too heavy to hold up