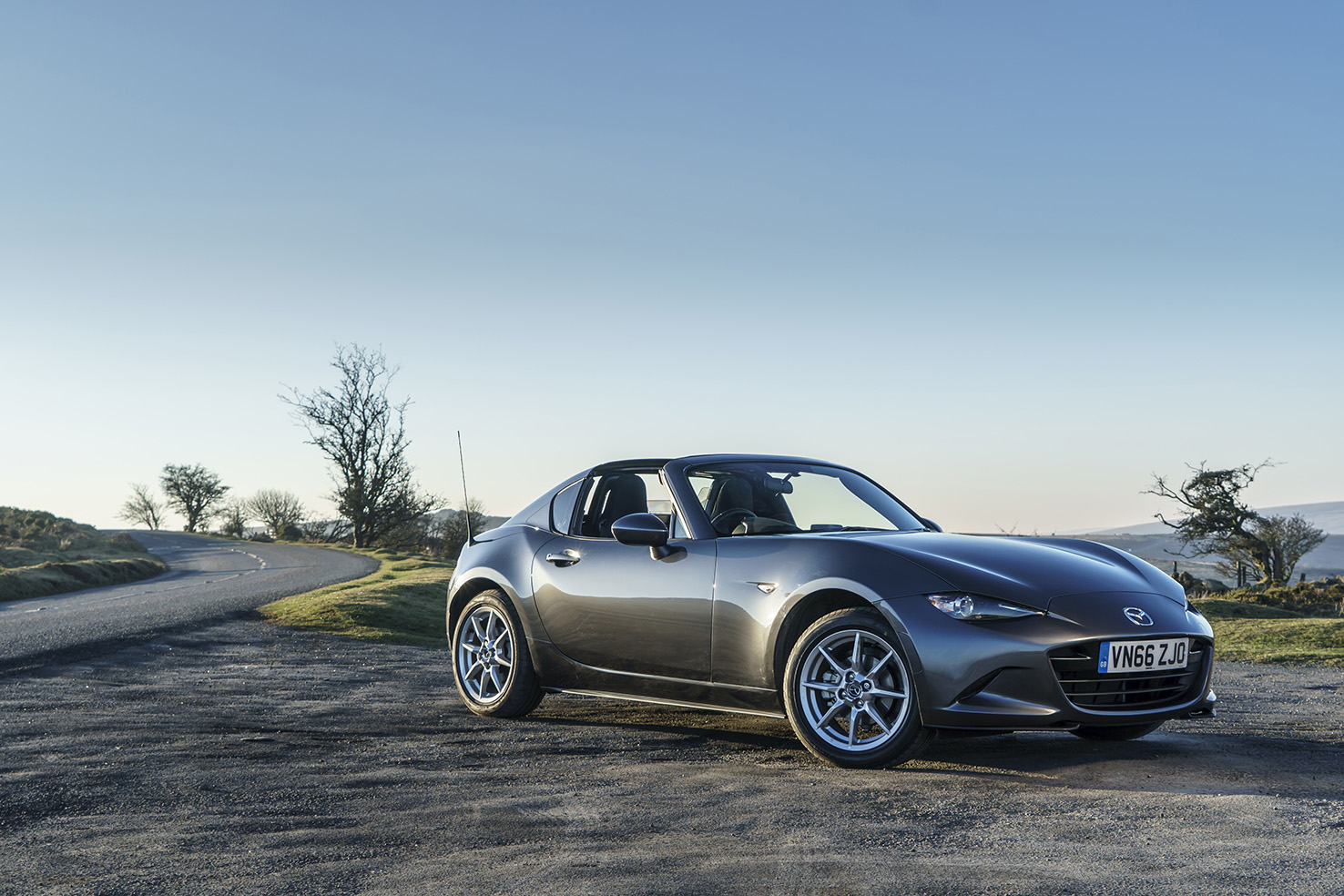 Perhaps the Mazda PR lady’s coat was a bit of a giveaway: Canada Goose Parkas are rated for temperatures of -30C and below. Devon in February doesn’t get quite that cold I’ll grant you, but to quote more than one motoring writer gathered for the launch of Mazda’s new MX-5 RF,

“It was bloody freezing up on Dartmoor”.

Dry, chilly days though are actually perfect for trying out a convertible sports-car. If anything’s going to find its way into an open-topped car it’s a frigid wind! Also, cold air is denser, so it’s actually performance enhancing – for the engine that is, it has an adverse effect on this particular scribe.

Fortunately my vertically challenged frame fits nicely under the MX5-RF’s all-new electrically retractable hardtop – taller drivers I fear might struggle a little. Mazda’s RF suffix stands for Retractable Fastback and it’s the name they’ve given to the targa-like aluminium and steel folding roof that glides back at the touch of button without encroaching on the MX5’s already modest boot-space. At the mere flick of a switch on the centre console the RF’s flying buttresses lift upwards whilst the roof panels and rear glass panel simultaneously stow themselves away before the buttresses take up their original positions once more. The whole origamiesque folding process takes just 13 seconds and can be executed at speeds of up to 6 MPH. It’s perfect for getting attention on the way out of a car-park. 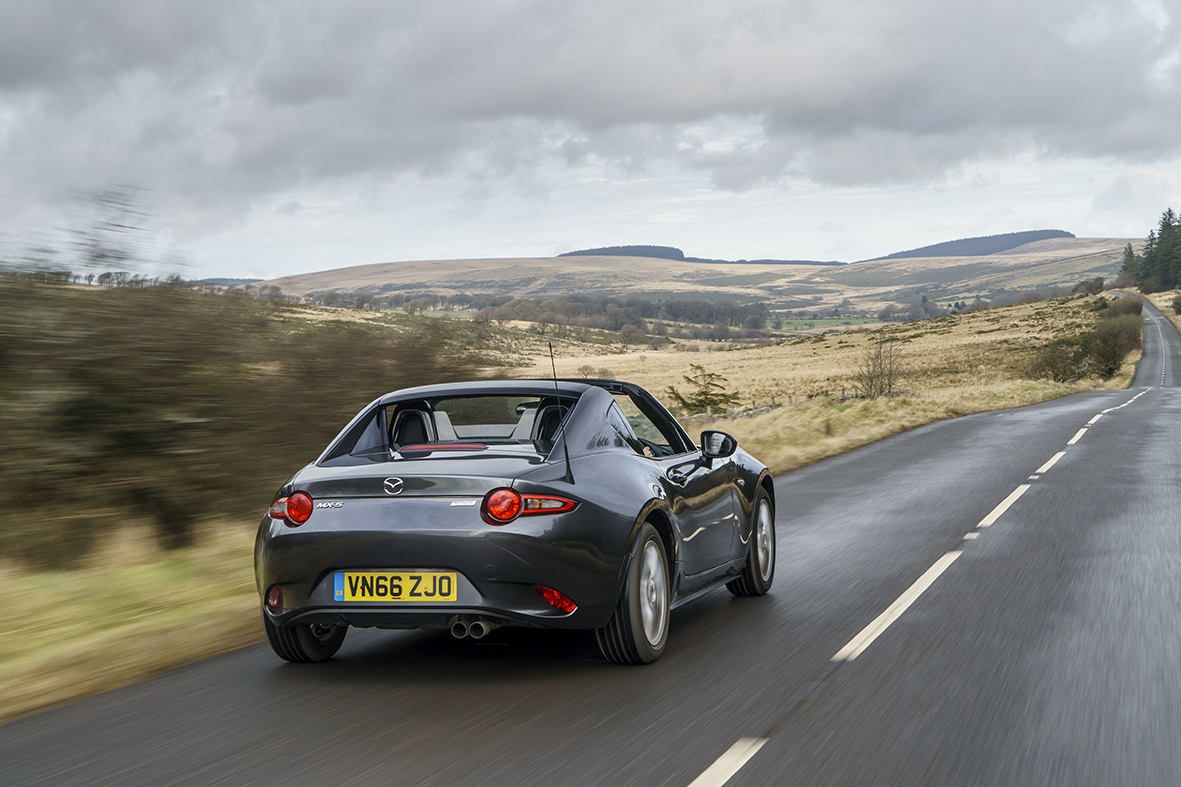 With the side windows up, the air-con set to toasty, and the seater heaters deployed it’s possible to enjoy both the MX-5 RF and the scented country air without freezing your vital bits to the core. Although if you’re used to a fully open MX5 you might find the RF is actually a little louder than the soft-top once it’s lost its clever tin hat.

Conversations of the shouty kind are required at motorway speeds and you’ll be glad of the extra speakers Mazda have put in the headrests if you want to listen to The Archers on the DAB. 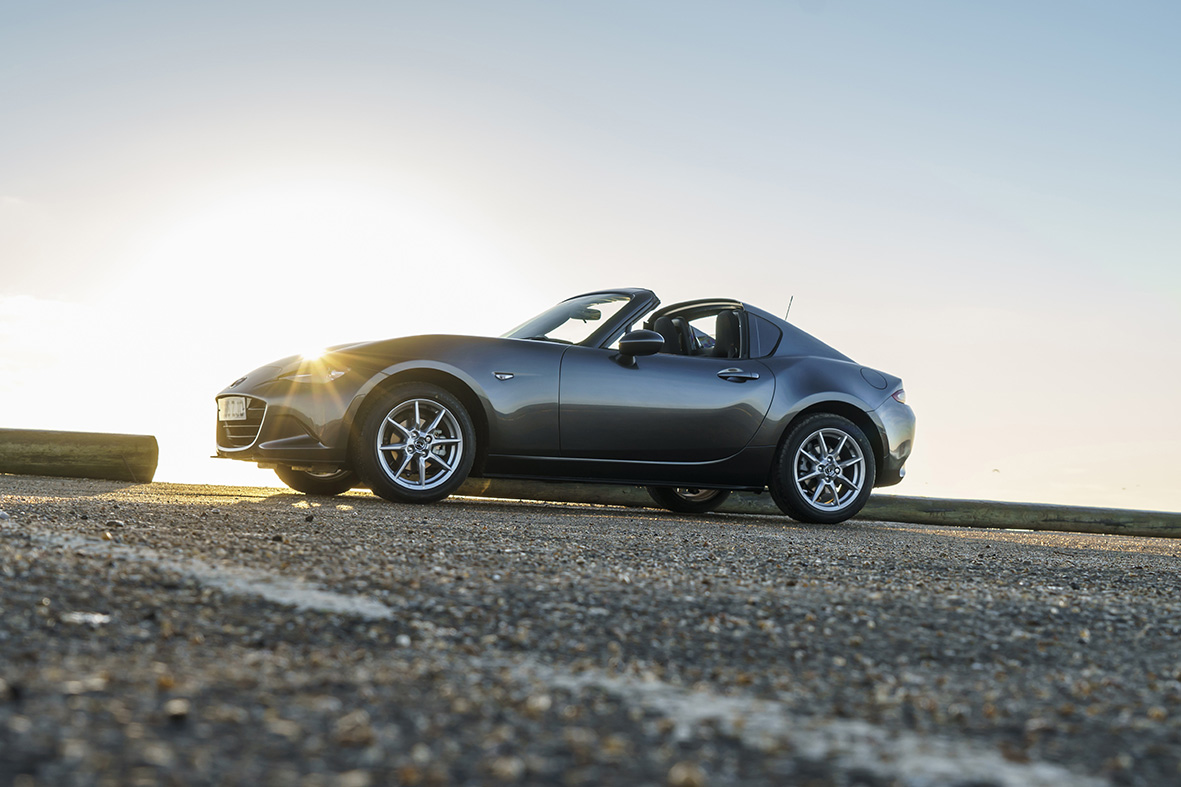 Conversely with said tin-top in place the MX5-RF is a far quieter place to be than the ragtop. Mazda have fitted more sound-deadening in the rear wheel-arches – and of course the roof is sturdier too – the result of which is a far more refined and quieter roof-up driving experience. So much so that if you’re prepared to pack light – there’s no glovebox or even door pockets – you could happily drive the MX-5 RF from Devon to Dundee. 40.9 MPG means it wouldn’t cost the earth to do so either.

Having driven both I’d say, if your budget allows it, go for the bigger motor. Not only does the 2.0 litre get to sixty a whole second quicker than the 1.5, its extra torque makes for more relaxed cruising plus a little extra punch out of the twisty bits.

Speccing the extra half-litre capacity also bags you a limited slip-diff, a strut brace and bigger alloys too. The resultant firmer feeling 2.0 litre feels more planted, without detriment I hasten to add, to ride comfort. It somehow suits the more mature feel of the Retractable Fastback.

That said the softer-sprung, revvier and more effervescent, 1.5 is also a whole heap of fun. Honestly, I wouldn’t turn my nose up at either engine. Add in the MX5’s beautifully quick steering, wrist-flick precise 6-speed gear box (there’s an auto available – but who’d want that?) and the near toy-like dimensions, and despite the extra 45 kg the folding hard-top adds, the RF feels every bit nimble as the MX-5 always has.

A spirited afternoon’s drive down to Salcombe harbour proved the MX-5 RF really is an excellent little thing to drive, and the hard-top means it’s now even more usable even more of the time. The RF commands £2K premium over its soft-topped sister, but even after a cold day on Dartmoor I’d argue that’s a small price to pay for what surely now must be the definitive affordable all-season roadster.

Many thanks to everyone at Mazda’s UK press office