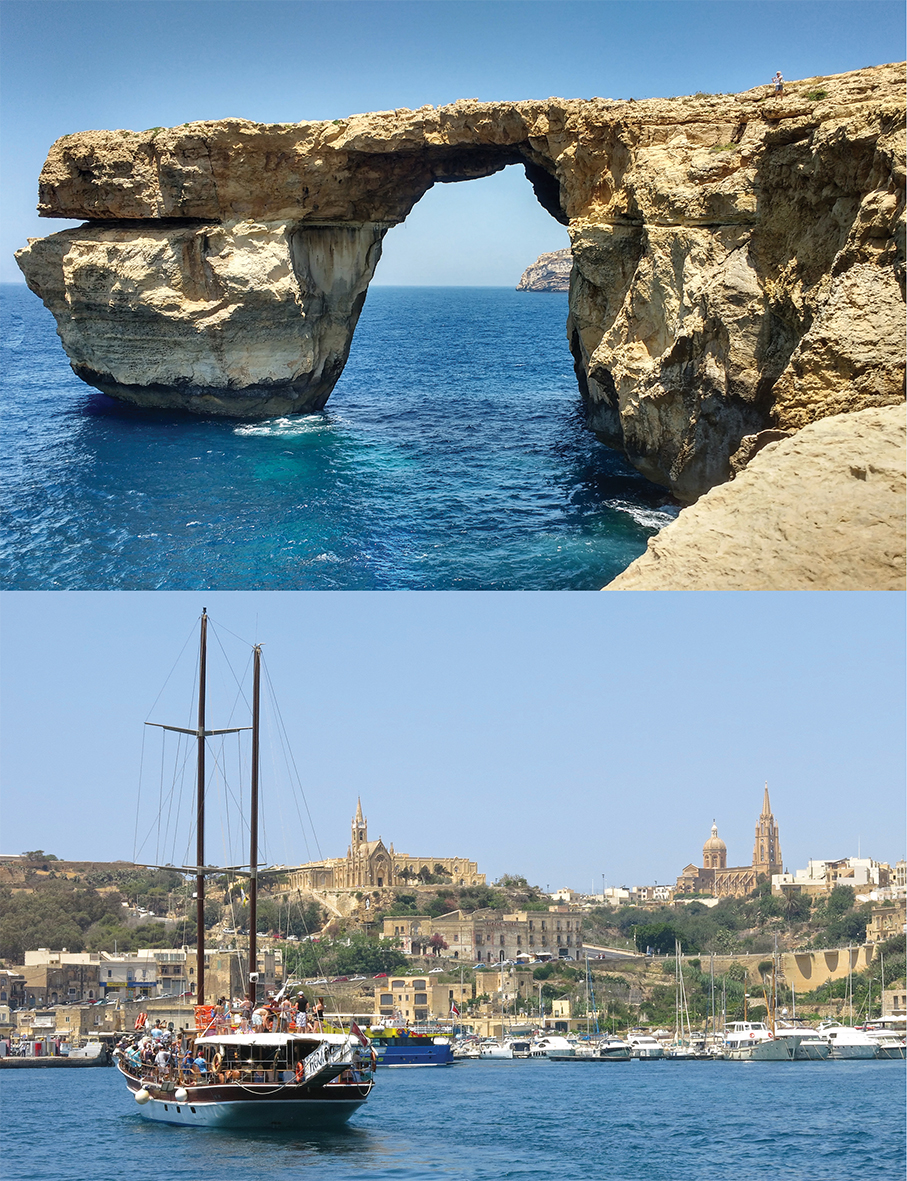 How it used to look before the storm last month, the ‘Azure Window’ Approaching Mgarr Harbour

LIZ STOPPED OFF AT THE ISLAND OF GOZO WHILE ON HER TRAVELS LAST YEAR. WHILST THERE, SHE VISITED THE FAMOUS ‘AZURE WINDOW’ WHICH SADLY COLLAPSED, DUE TO EROSION LAST MONTH JUST BEFORE WE WENT TO PRESS. SO ALTHOUGH IT NO LONGER EXISTS, WE DECIDED TO KEEP THE PHOTOGRAPH IN SO THAT YOU COULD ENJOY IT.

It’s not yet ten in the morning and already the heat of the Mediterranean sun warms us as we stroll along the jetty in Bugibba near St Pauls Bay, Malta to board a boat excursion to the sister island Gozo, separated by a 5km stretch of sea. The crew cast off. Within minutes we pass alongside St Paul’s Island, upon which a statue marks the site of the shipwreck. St Paul survived when being taken to Rome to be tried as a political rebel. The ship carrying him and 274 others was caught in a violent storm and wrecked off the Maltese coast. Fortunately all aboard swam safely to land. It is said that it was St Paul who brought Christianity to the islands in around A.D. 60. 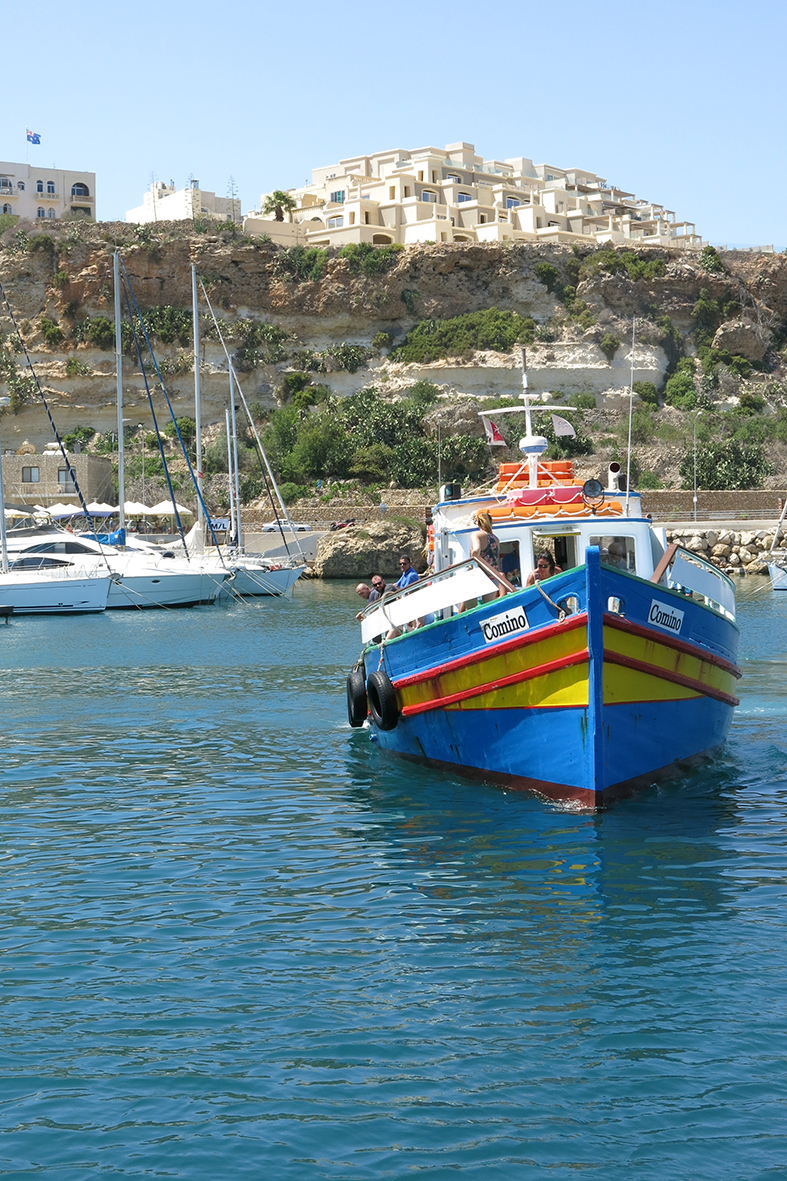 We cruise the sparkling deep blue waters of Mellieha Bay, then into Mgarr Harbour, the main port in Gozo, where a mini bus is waiting at the quayside to whisk us on a whistle-stop tour of the island’s highlights.

Gozo, one third the size of Malta has a quieter way of life, unhurried, more rural and with a population of approximately 30,000. Rabat also known as Victoria is the main town on the island, the capital was named in honour of Queen Victoria’s Diamond Jubilee in 1897. 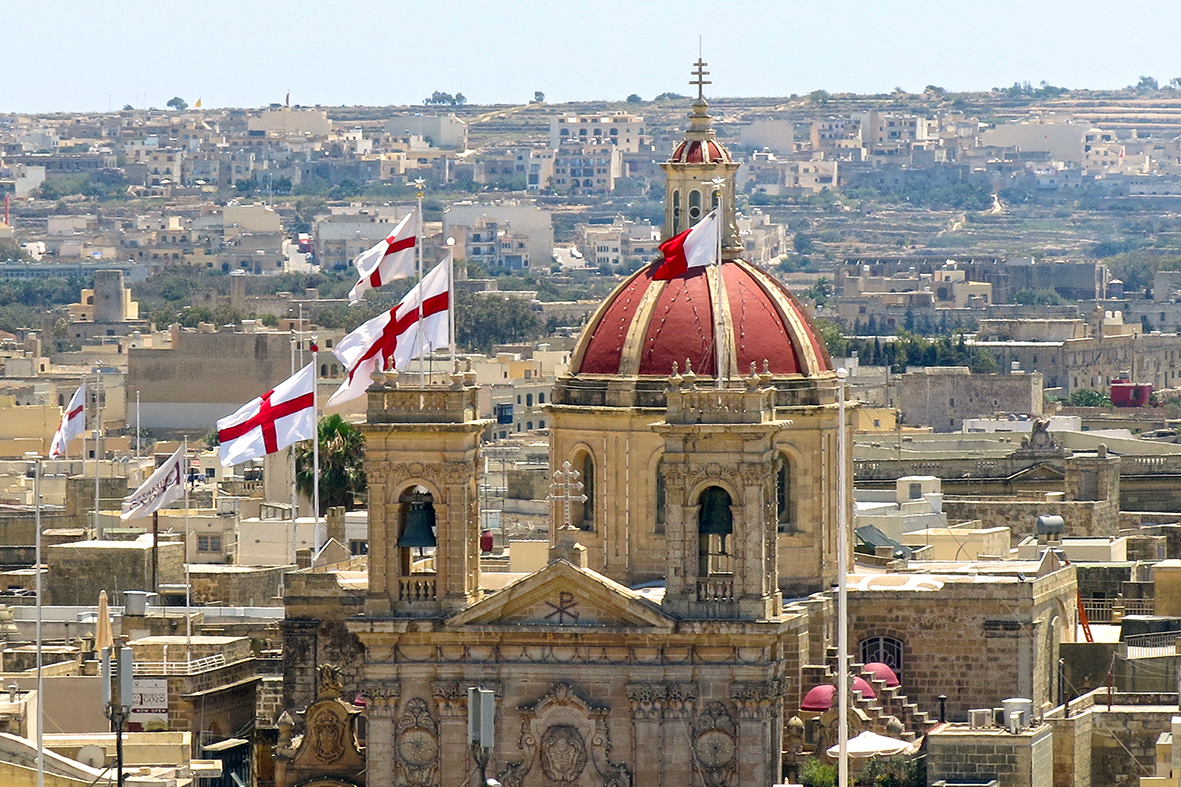 In the town’s central square the pristine white and red Maltese flag flutters above the magnificent dome of the richly adorned St George’s Church. Surrounded by cafes and bars it is an ideal spot to sit and people watch. It is also the starting point to venture forth and wander through the maze of streets and alleyways. 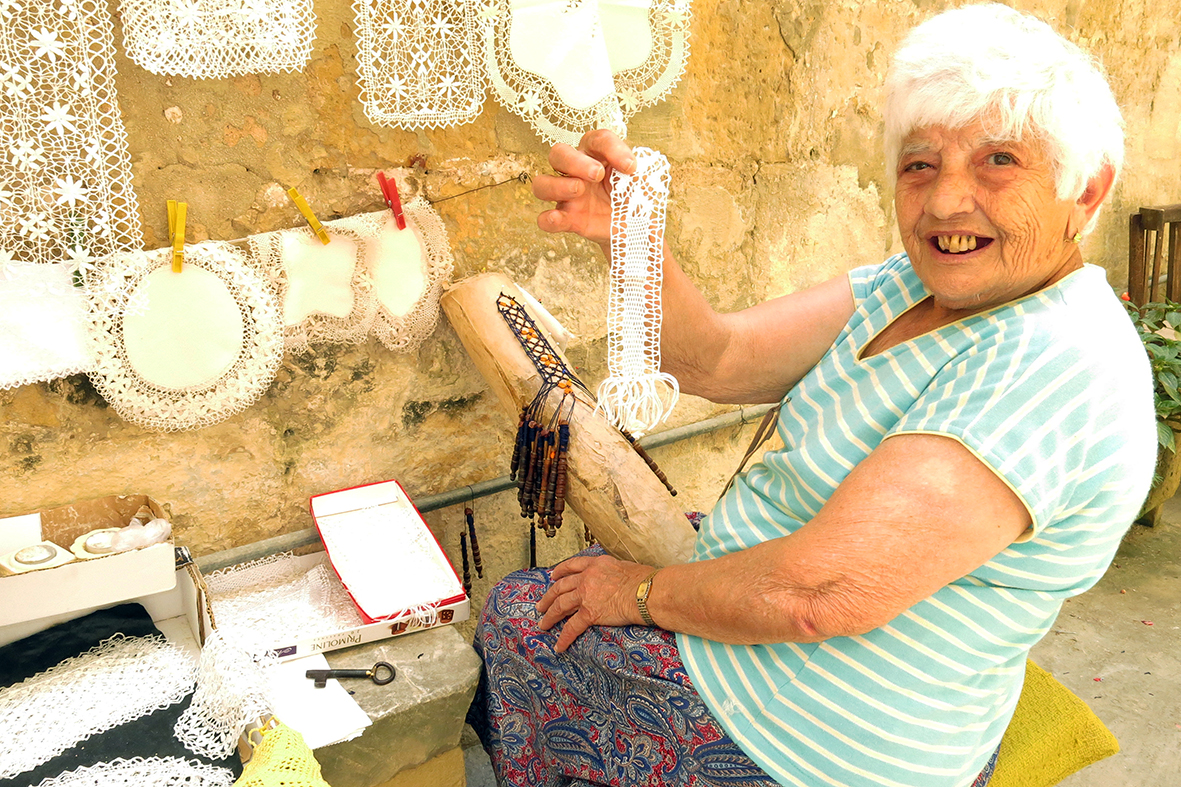 Around a corner I caught sight of a white haired lady sitting on a stool in her garden, she smiled and waved to us to come closer. We looked on as she proudly demonstrated her lace-making skills known locally as bizzilla, an island tradition. Her elderly but nimble fingers skilfully crisscrossed bobbins creating a delicate book mark. 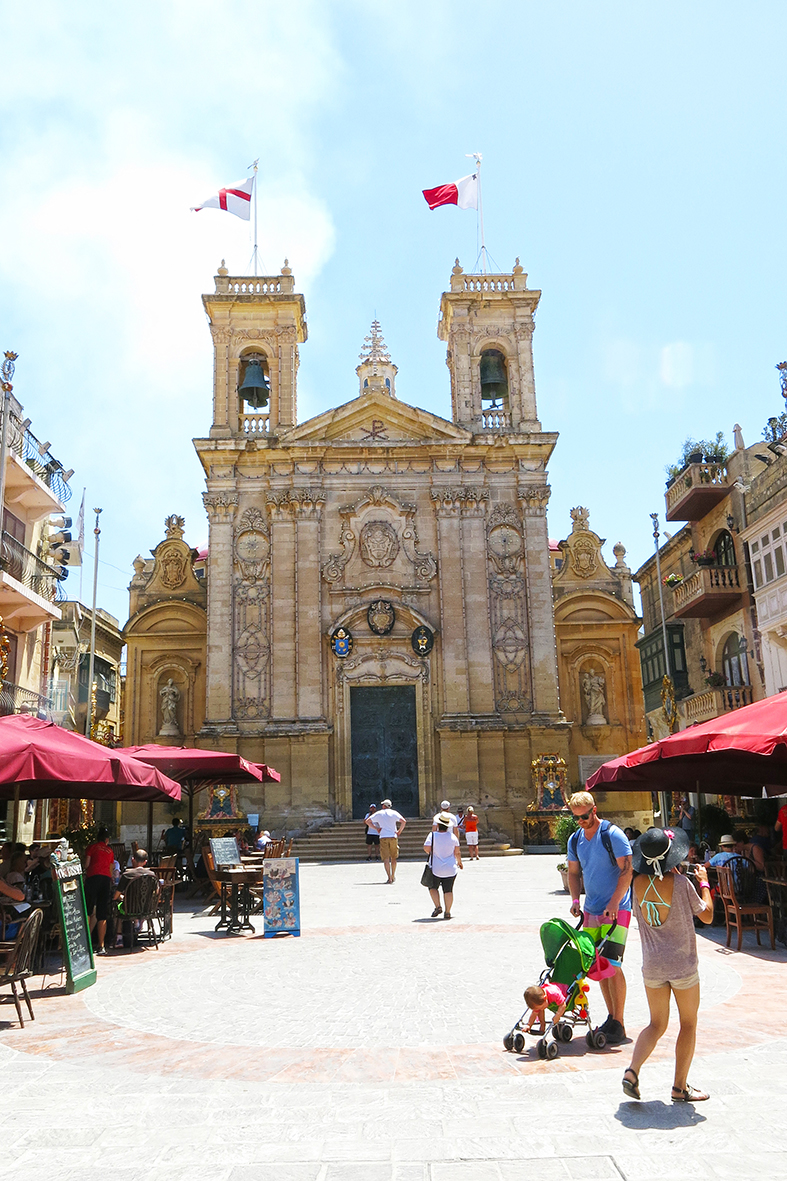 A hill leads from It-Tokk (the square) past small shops selling wine, cheese, and antiques to the Citadel, once the old capital of Gozo. From this vantage point there are uninterrupted views across the island. In the past it was a sanctuary from attack; until 1637 citizens were required by law to spend their nights inside the walls for their own safety.
Today only a handful of families live within this medieval city.

The Cathedral of Gozo – Basilica of Ta’ Pinu

As you enter beneath an archway the sight of the baroque Cathedral of Gozo comes into view. The imposing building stands atop a wide flight of steps dedicated to the Assumption of the Virgin Mary. Standing on top of the fortified ramparts Gozo’s landscape stretches before you, allowing a 360-degree
panorama. 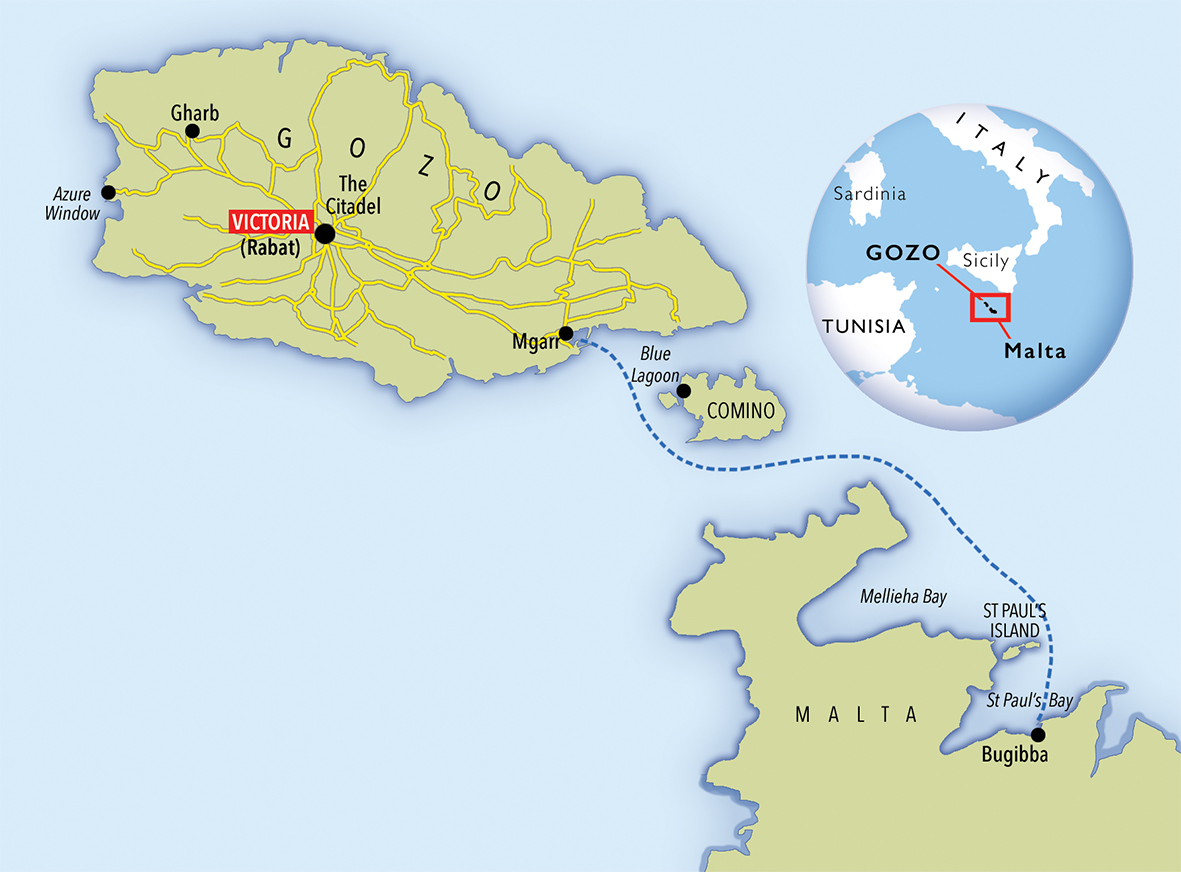 Once again on the bus we drive to Gharb in the north west of the island to visit the Basilica of Ta’ Pinu, an impressive site that seems out of place in the flat parched countryside. Located on a ledge of rock, built of local stone, its façade is so immaculate you would think it has just been completed, but it dates back to 1920-1931 and is one of the most visited places on Gozo. It is said that the Virgin Mary has been heard here and for this reason it is known as “the Church of Miracles”. Off to one side stands a museum, the walls hung with photos, letters, items of baby clothes, plaster casts from broken limbs, all testimony to the stories of alleged miracles, making the church a famous site for pilgrimages.

We made one last stop, on the shores of the village of Dwejra, to see the Azure Window – a natural limestone rock arch, towering 328 feet out of the turquoise sea. It’s a landmark recognizable from films such as Clash of the Titans and the Game of Thrones. It was an impressive sight and along with many other visitors we crossed the cliffs to pose for a photo. At its base is a collapsed underwater cave known as the Blue Hole, which is one of the most popular dive sites on the Maltese Islands with its array of marine life from Octopus to Parrot fish.

Santa Maria Bay – The many visitors to The Blue Lagoon 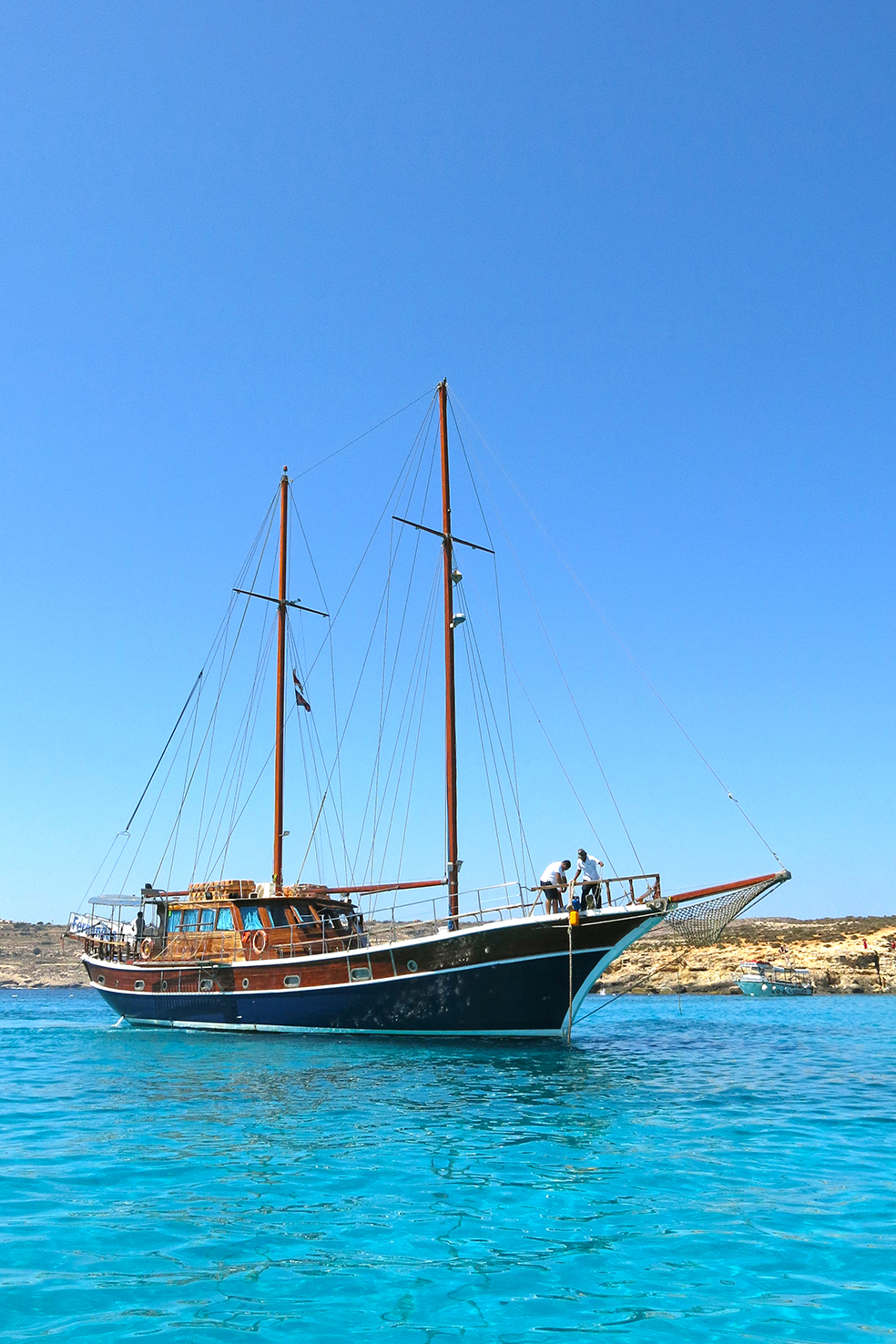 A beautiful sailing vessel docking at the bay

Divers and snorkelers entered the cool blue waters. I watched enviously, but we had no time for a swim just yet. Our afternoon on Gozo was coming to an end, but there was one final stop – the Blue Lagoon at Camino, the tiniest of Malta’s three islands. As we approach it did look like paradise as the translucent aquamarine sea gently lapped the white sands of Santa Maria Bay. The sheltered cove attracts many visitors. Boats drop anchor around the rugged coastline, then you follow a narrow path, worn smooth by the feet of sun worshippers onto a the narrow isthmus of rock, covered in rows of striped deck chairs, where day trippers relax -squeezed closer together than sardines in a can.

I laid claim to the edge of a stone step leading down to the beach, and stowed my sandals and towel. I crossed the soft sand and passed by the children splashing in the shallow water. As I swam further from the shore, the noisy chatter of people faded, and at last I was immersed in the cool waters which had been enticing me all day. What better way to end my trip!