WELCOME TO THE NEW DECADE OF THE 1850s

What does Swansea have in store for us during this decade 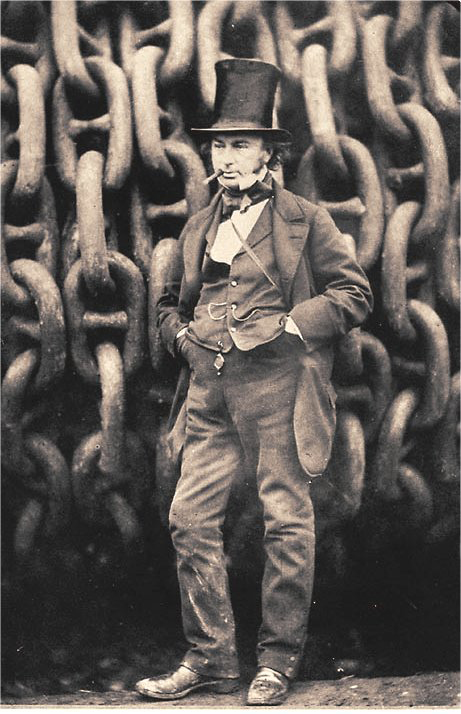 On the 18th June 1850, what we now know as High Street Station opened its doors for the first time. The South Wales Railway Co. wanted to connect the Great Western Railway line near Gloucester with south and south-west Wales. The engineering work was carried out by the famous engineer of the day, Isambard Kingdom Brunel (right). The railway ran from Swansea to Chepstow (75 miles), passing over the Landore Viaduct (1,759 ft) high, ran on a broad gauge track (7ft ¼ in). When the line reached the River Severn, the Admiralty objected to a bridge due to the volume of ship activity.

That’s one station, High Street, to be marked on our Monopoly board, the other railway is the famous Mumbles Railway, being operated by the Swansea and Mumbles Railways. At this time the carriage is still being pulled by a horse. We will hop on the train to see what life was like at Mumbles during this period in future articles. Going back to High Street Station, it is interesting to discover who owned the land and for what purposes it was being used, before Brunel laid ‘his’ tracks down. 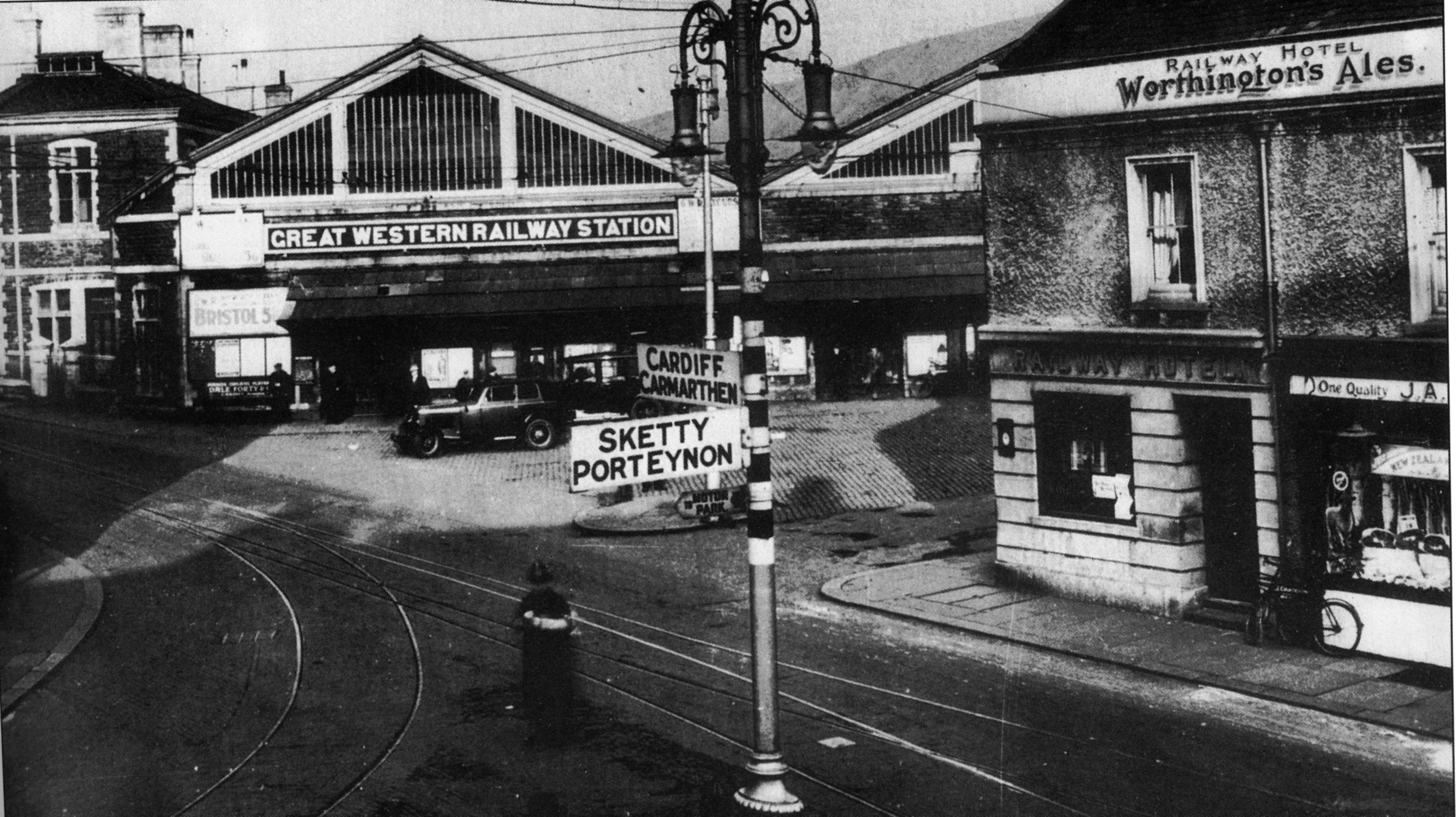 This is how the High Street railway station would have appeared to travellers coming and going in the years after the First World War. According to the advertising sign a trip to Bristol was just 5 shillings…return of course! 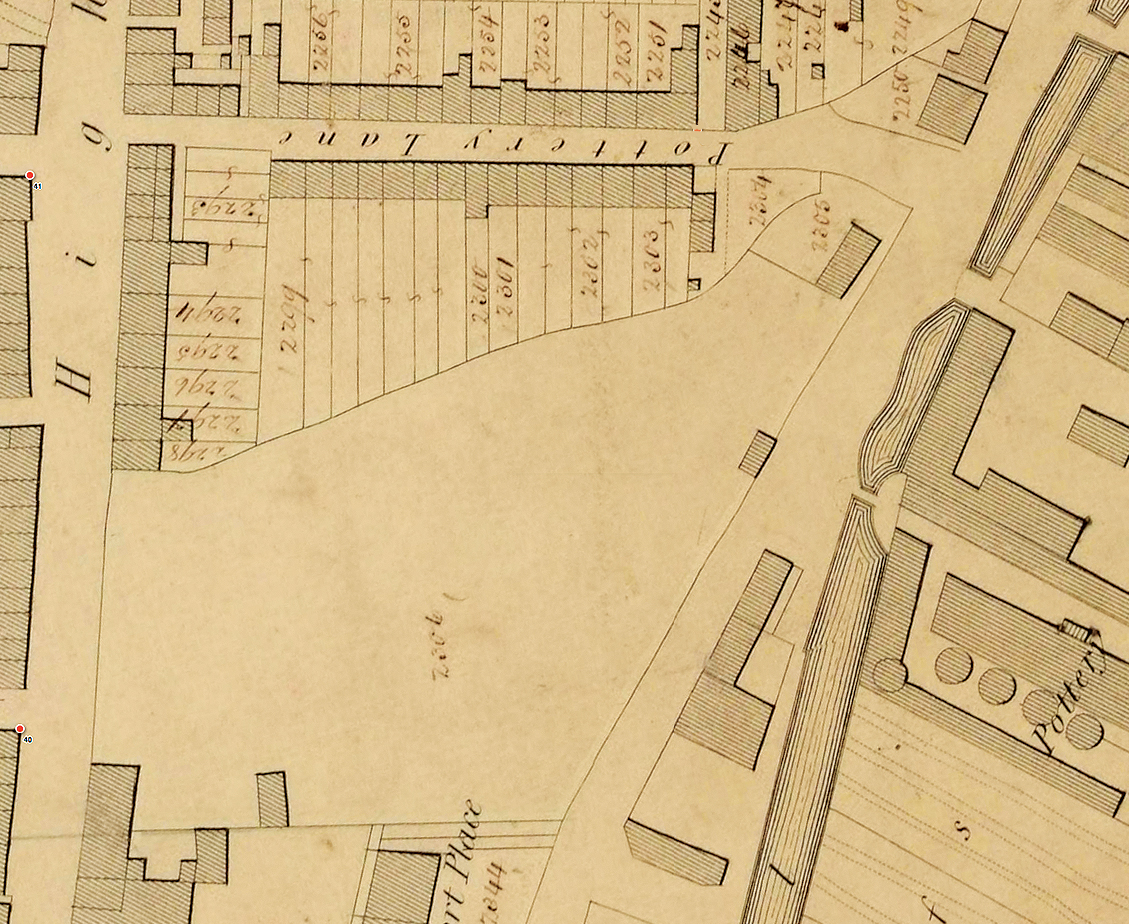 !836 Tithe Map – Swansea, showing Pottery Lane and land where the railway is going to be laid

To find the answers we must consult the Tithe Maps. These maps were not common before 1836, when the Tithe Commutation Act, 1836, came into force. The Act, replaced the ancient system of payments of tithes in kind with the monetary payments. Tithes were originally paid to the Rector of the local parish, as alms and as payments for his services. The tithes, were often stores in tithe barns. After Henry VIII’s Dissolution of the Monasteries (1536-41), the land was passed from the church, and tithes were paid to private landlords. The Act also allowed tithes to be paid in cash rather than in kind. Maps were produced with an accompanying schedule, giving the names of all owners and occupiers of land. The schedule also gave a description of the land, including fields and sometimes field names. Three copies were made, one held by the Tithe Commissioners, one locally in the parish church and the other in the Diocesan Registry. 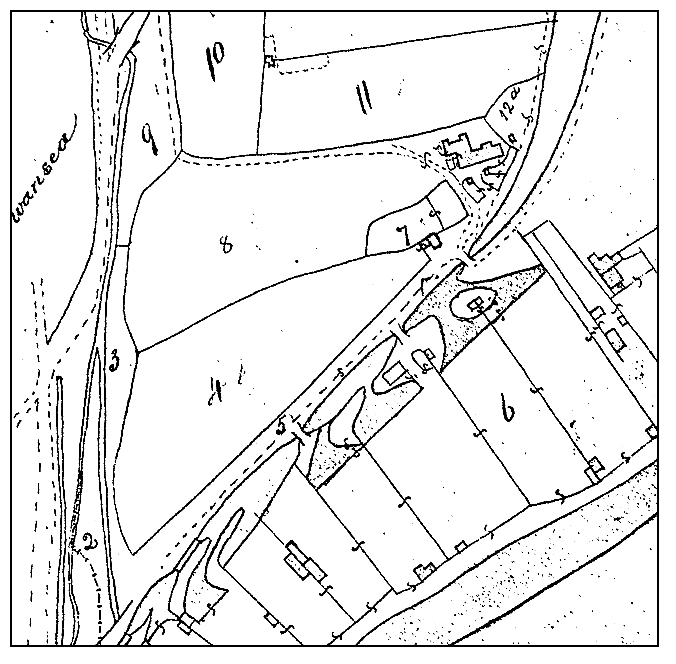 1844 Tithe Map – Parish of St. John-juxta. Map showing fields 4 and 8 where the railway is going to be laid. Both with kind permission West Glamorgan Archives, Civic Centre

Using the Tithe Maps for Swansea and the Parish of St. John-juxta, we can see that some of the houses on Pottery Lane, Nos. 2, owned by David Morris; No. 4 owned by William Jones; No. 8 owned by John Williams and No. 9 owned by Margaret Thomas were razed to the ground. Also lost was Field 4, owned by Richard Aubrey and “mysterious owner” of Field 8, to accommodate the new railway lines.

During this period, there was a huge influx of Irish immigrants arriving in Swansea, fleeing the Irish Potato Famine (1845-52), although Swansea had links with Ireland for years prior to this, as it was a place of refuge. One of those to arrive, was Hugh Gore, Bishop of Lismore and Waterford. Gore was the founder of the Swansea Grammar School (1682).

If you attended this school at its various locations around Swansea, I would be delighted to hear from you.

Before the famine, arriving in Swansea during 1839, was Father Charles Kavanagh. He was responsible for the Irish in Swansea and surrounding areas. He would die in Swansea, on 20th October 1856. At the time of 1838 there was an estimated 400 Irish Catholics, the figure rising to 1,369 by the time of the 1851 Census and 2,800 Irish living in Swansea by 1859. The Irish lived in the district of Greenhill, known as “Little Ireland”. It seems there were frictions between the Welsh and the Irish. The Cambrian (local Swansea newspaper at the time), report-ed that during 1842, six Welshmen murdered an Irishman, John Bowling. Seven years later, a party of Irish navvies murdered two Welsh men at Fforestfach. 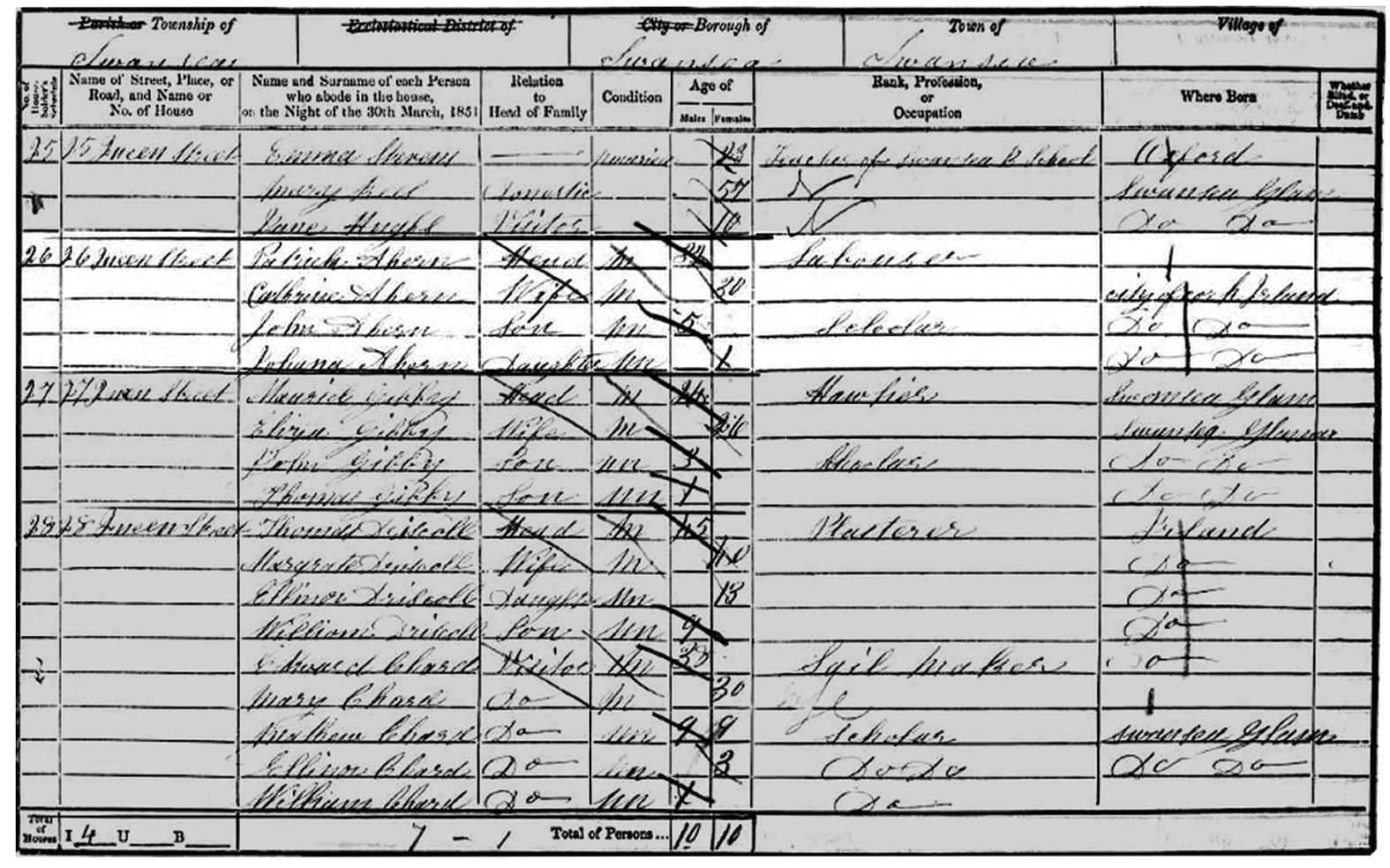 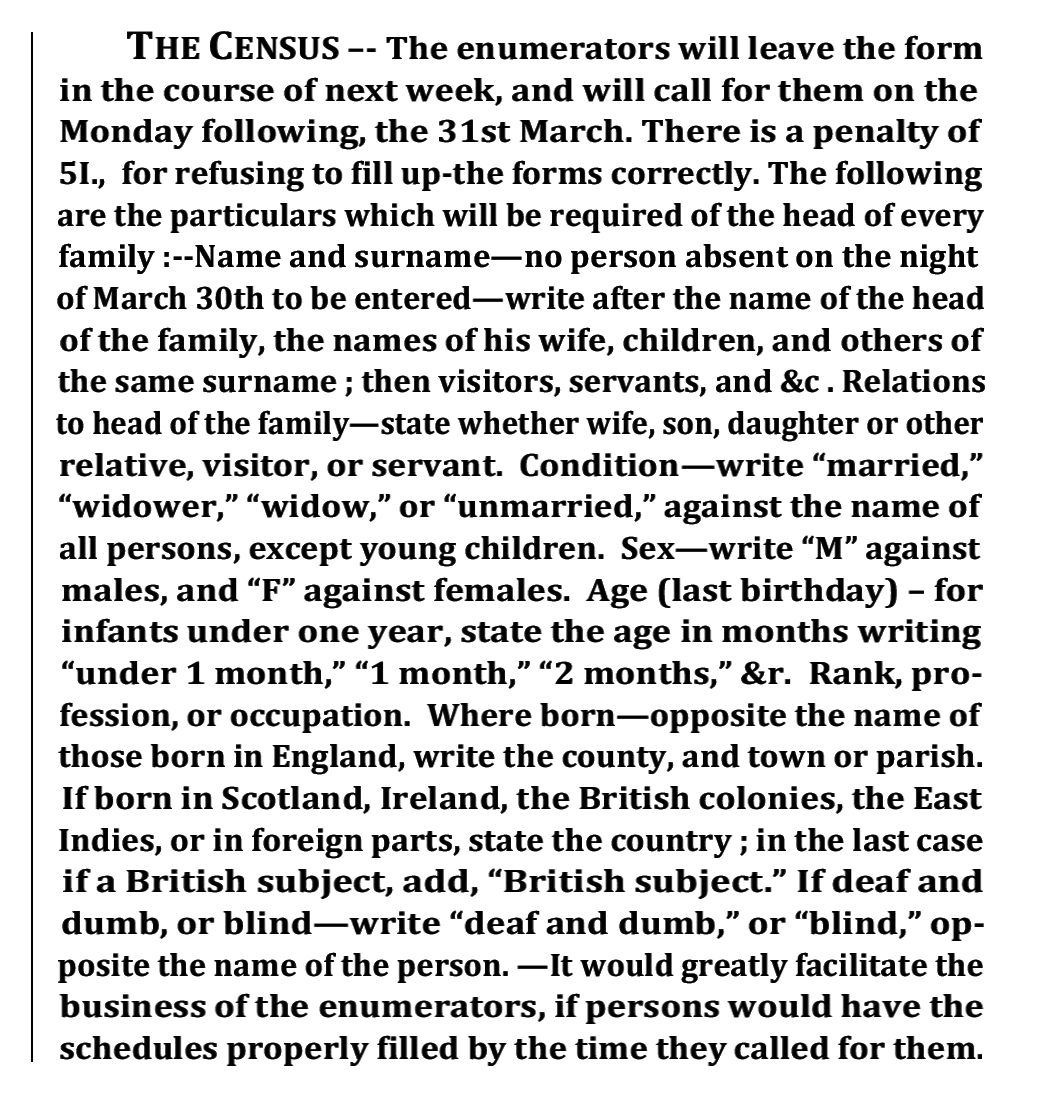 The Cambrian – 21st March 1851. With guide-lines for filling the Census Forms

It was the first time where the householders were asked to give more precise details of the place of their birth, relationship within the house-hold, marital status and if they had any disabilities, along with occupa-tions. At the time of the forms being delivered to households, The Cambrian, on 21st March, gave in-structions to householders on how to fill in the forms – there was a 5d fine (£14 today), if not completed. Once the forms were complete they were collected by the enumerator. The information was transferred into census enumerators’ books. Information on the residents of a road could be split over several folios with other streets between.

Also during 1850, the Swansea Local Board of Health was formed to regulate sanitation in Swansea. To help them with the planning and laying of the sewage pipes, the London surveyor Samuel Grant mapped the town. It took 2 years to complete the task of mapping Swansea, Swansea had never been surveyed in such depth before. It is his map that we can use today to ‘see’ the layout of roads and positions of houses, and for the first time, house numbers. Queen Street today, if it was still standing, would be situated along Alexandra Road’s ‘old library’. No.26 seems to have a privy, shared with 7 other houses. Unfortunately, there doesn’t seem to be any photographic evidence of these houses. The last map example from the Local Board of Health, dated 1855, is of High Street Station, where Pottery Street has been sliced in half.

These maps are all fore-runners of the first publication of the Ordnance Survey map during the 1870s.

The West Glamorgan Archives, hold all the maps that were used for this article. Full stories from The Cambrian can be obtained from the Civic Centre library.