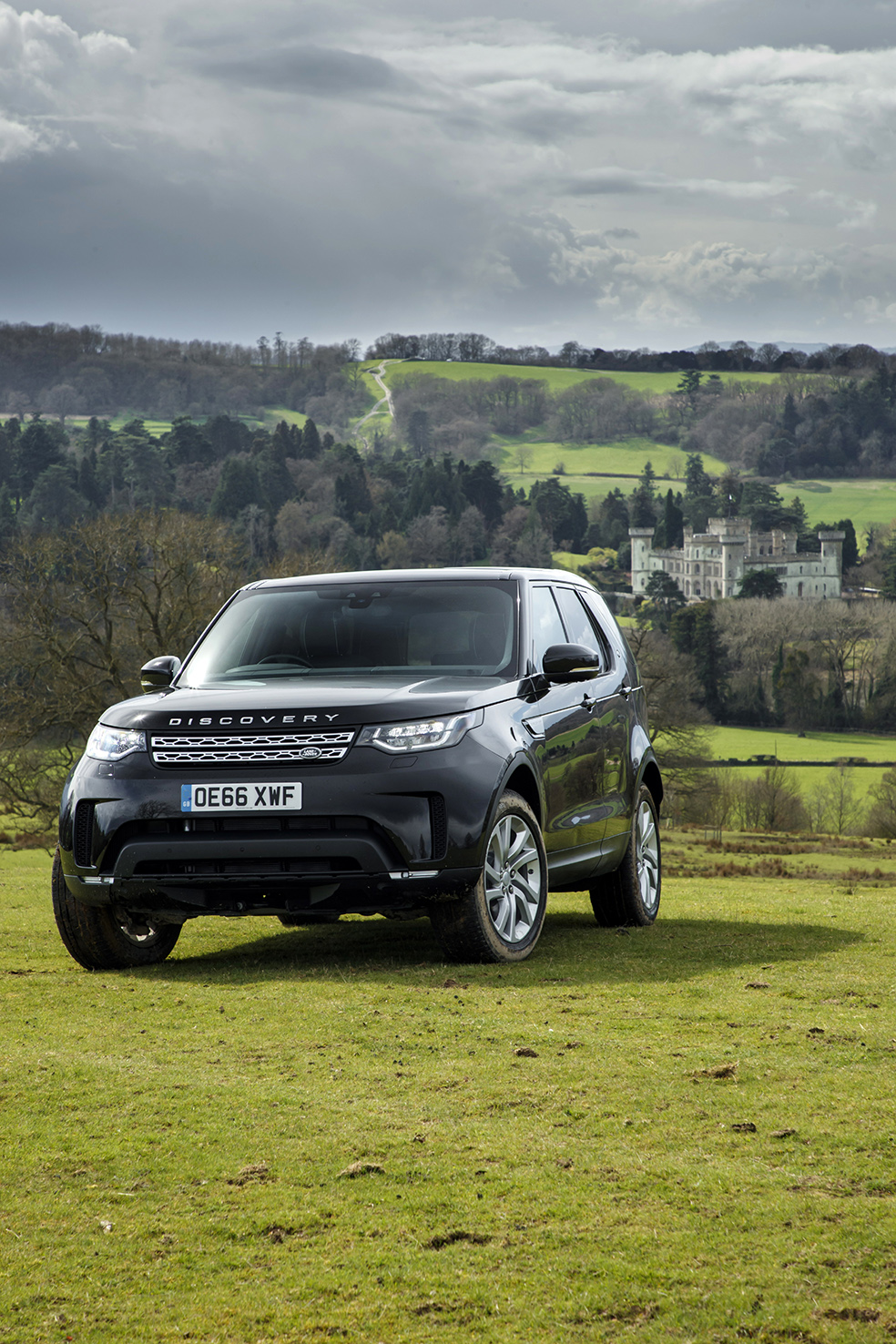 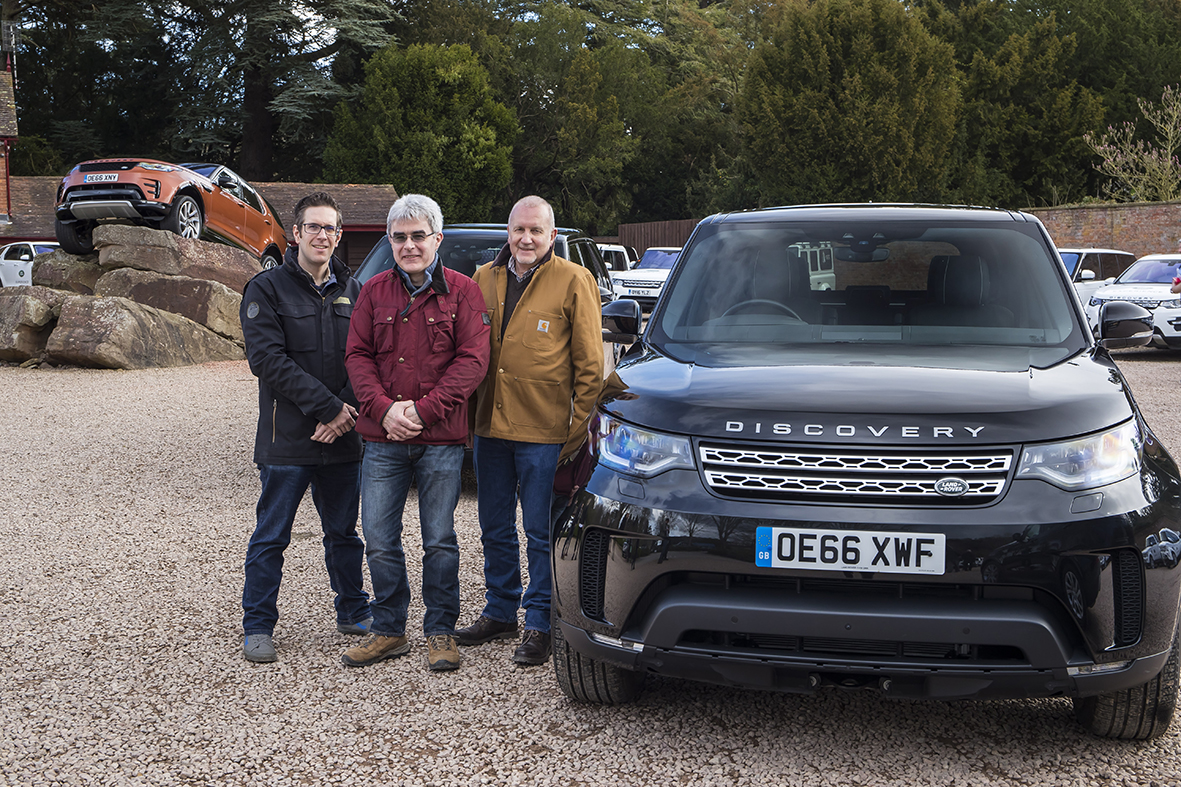 If ever there was a car that was destined, nay designed, to be driven in boots and a Barbour jacket surely the Land Rover Discovery was it. No surprises then that when the invitation to sample the all-new Discovery came “Make sure to wear sturdy footwear and warm/waterproof clothing” was written in very bold type. Eastnor Castle in Herefordshire was to be our meeting point.

Land Rover call Eastnor “their” Maranello. It’s their proving ground, and has been since 1961. Land Rovers of all kinds, prototypes included, have been quietly and secretly tested in the forests that make up part of the castle’s rambling estate – fording rivers, crawling over rocks and going extremely off-road – since before Yuri Gagarin took his most famous flight. It may be far closer to Malvern than it ever will be to Milan but strangely you have to agree.

You can’t help but see just how radically different the all-new Discovery 5’s styling is to the model it replaces either. Weighing-in at nearly half a tonne lighter than the Discovery 4, thanks in part to a monocoque construction rather than the more traditional body-on-chassis layout of the old car, and extensive use of alumin-ium rather than steel, the Discovery 5 looks a whole lot sleeker. And it is too. Where once the Disco cut through the air like a house-brick through the proverbial, the new Discovery 5 is altogether more aerodynamic and as a result easier on both fuel and the environment too. 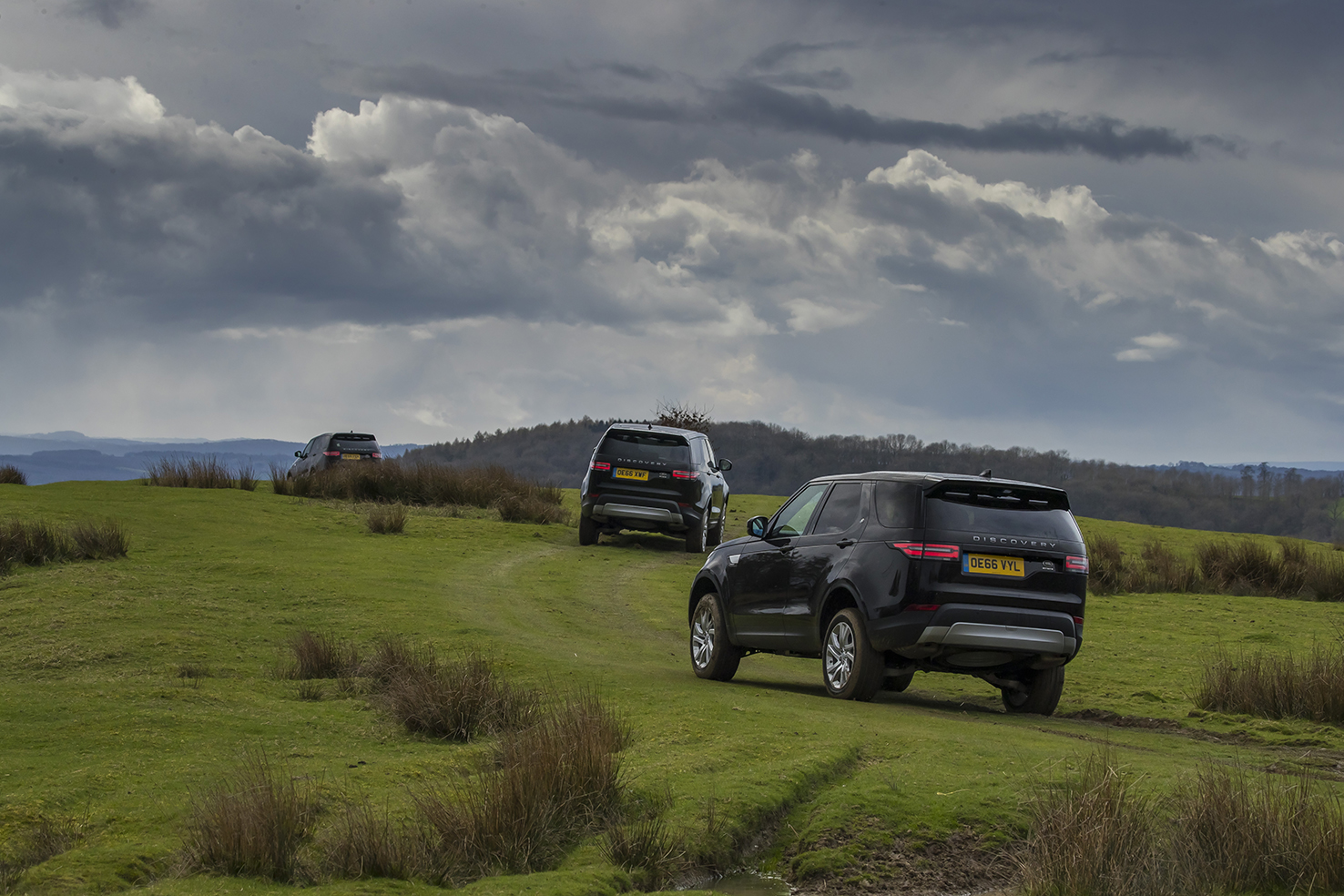 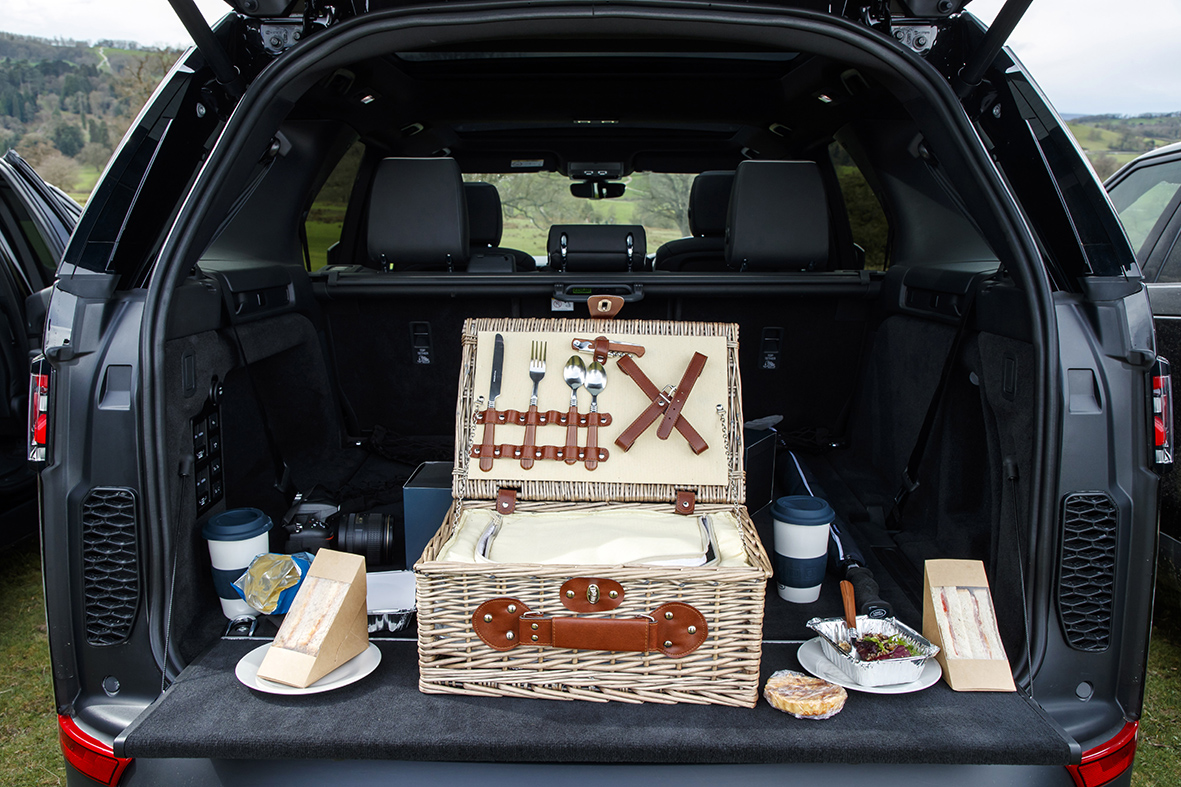 Is it good looking though? It’s the question we asked ourselves all day. It’s certainly the work of Gerry McGovern, and it is very colour sensitive. Long gone are any resemblances to the boxy shapes the Wilks Brothers once drew in the sand. The front-end gains an Evoque-like sloping grille and wrap-around headlights, whilst at the rear the split tailgate has been resigned to the history books, replaced instead by a single-piece composite item (more weight saving) that shifts the rear number-plate to one side – a nod to Discoveries of old – and swings up to reveal the new powered inner tailgate that Land Rover say will support up to 300Kgs of passenger, pointer, press-photographer or picnic.

Climb aboard and instantly you’ll notice that the line where Land Rover stops and Range Rover starts becomes ever-more blurred. The leather on all 7 of the Discovery’s seats, dashboard and door-tops is thick and soft, the driving position is similarly (if not quite) as imperious, and the chunky switch-gear is first class. There’s storage space in abundance – there’s even a cubby hidden behind the heater controls, 5 isofix points, more than enough USB points to keep even the most dedicated of the Twitterati re-charged, a DAB tuner… the list goes on. The whole car can be used as a wi-fi hot-spot, and everyone, even those sat furthest aft, get enough legroom in their heated seats to make sure the Discovery 5 can be considered a genuine 7-seater and not just a 5+2. 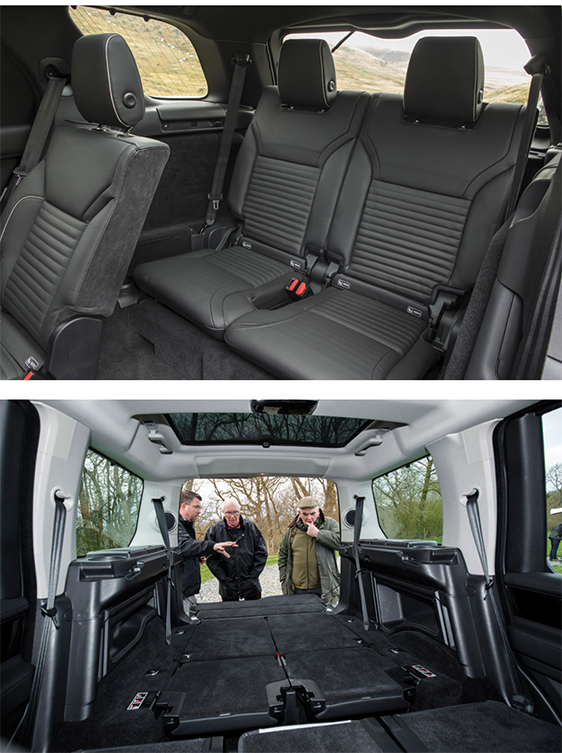 Oh yes, those seats. I nearly forgot. All 5 of the new Discovery’s rear seats can be folded flat electronically either from the front touch-screen (which also hosts the sat–nav, the reversing and the Disco’s multitude of other camera displays, the tuner, and entertainment, and the driver infor-mation system), by pressing buttons in the boot, or remotely via a phone app and there are sensors in each chair to pre-vent you inadvertently crushing anything important you may have left on them. So, from your office chair, or wherever you maybe for that matter, you can now turn the Discovery 5 from luxury SUV into very capacious go-anywhere load-lugger. And go anywhere and lug loads it will.

All new Discoveries get air-suspension as standard: the on-road ride quality is superb. You glide rather than ride over road imperfections and accurate and direct steering adds further reassurance. You wouldn’t want to hustle the Disco 5 down a B-road – it’s still heavy remember – but relax a little and you can cover ground swiftly and in comfort. “Our” TD6 HSE sprinted to 60mph in just 7.7 seconds, it’s diesel V6 sounding particularly nice as it did so. 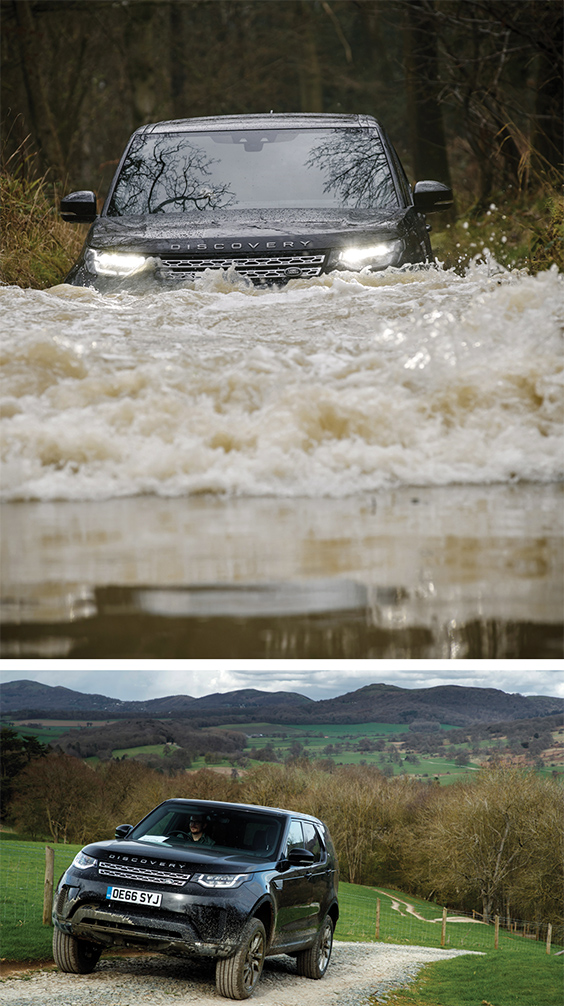 Stray off the beaten track and the automatic Terrain Response 2 System means crossing the unknown is equally as easy. Raise those pneumatic dampers and you get 283mm of ground clearance, a 900 mm wading depth, and 500mm of axle articulation. Permanent four-wheel drive, a selectable 8 speed low-ratio gearbox, lockable electronic diffs and a now near-flat underside make plundering the tundra a doddle. Regardless of the obstacle – and at Eastnor there are many, each more extreme and unforgiving than the next – the Discovery 5 seems to take it all in its all-terrain-tyred stride. A myriad of automatic hill descents and traction control sensors and systems work overtime so you as a driver don’t have to. 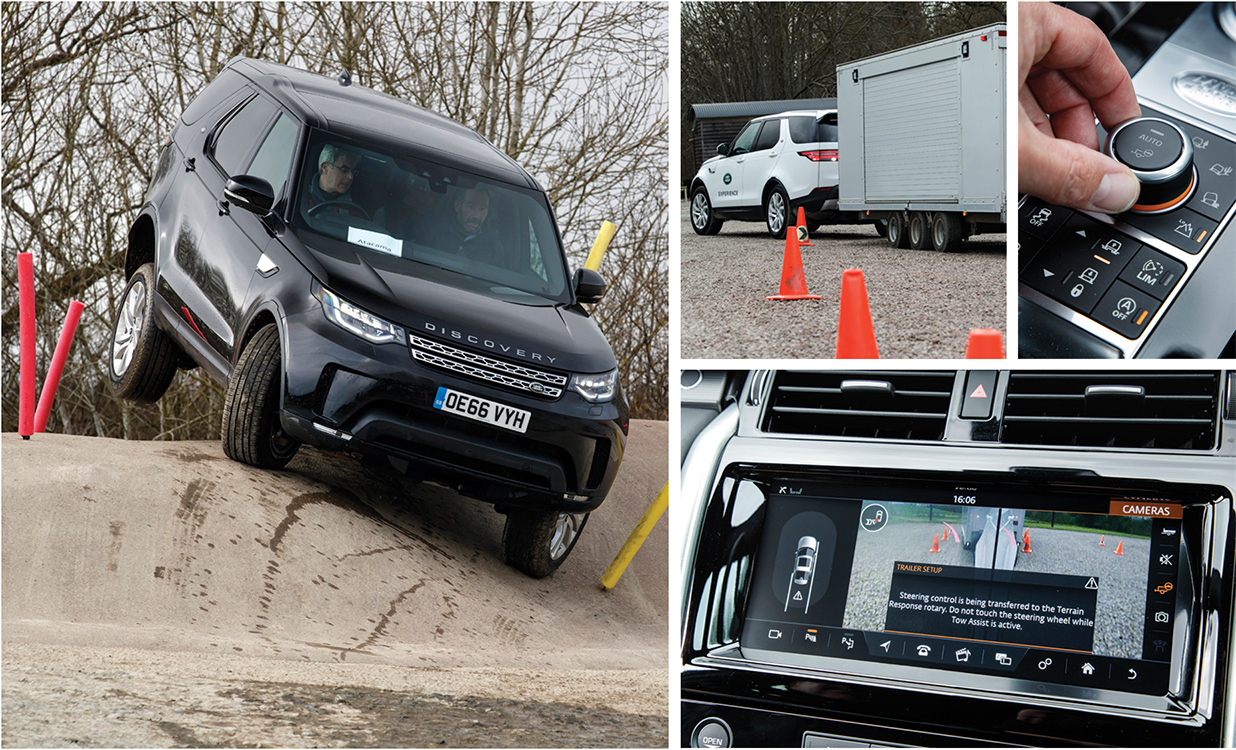 It’s the same if you deploy the folding tow-bar and couple-up a trailer. Tow Assist allows you to reverse whilst steering the whole Disco-trailer combo from a thumbwheel on the centre console, your course plotted on screen on the dashboard. It takes a little getting used to and you have to program the system with your trailer’s dimensions beforehand, nevertheless my co-driver who had never reversed a trailer in his life before, weaved backwards through the cones like a pro. His hands never touched the steering wheel.

Most new Discovery owners I suspect will never use such things; mounting a kerb is as extreme as it’ll ever get for them. But that’s not the point. I’ve worn an Omega diver’s watch since I was 23 and I’d struggle to swim a width of my local pool. You don’t buy a Discovery because you need to use all of its functions, you buy one for the reassurance that it’s got them.

You will need deep pockets though. As we returned our mud-splattered Discovery back to the Eastnor Castle car-park I perused its lengthy spec sheet. A 3.0 TD6 HSE Discovery 5 starts at £64,195 before options. You could have bought the Suzuki Ignis (also four-wheel drive) I arrived in, for what Land Rover lavished on options alone on “our car” on top of that.

Arguably though the Discovery 5’s breadth of talents – its abil-ity to seat seven, its go any-where capabilities, its comfort, and most of all, that most enviable quality of not looking out of place anywhere you take it – means it’s actually a whole number of different cars all rolled into one. It might well be all the cars you’ll ever need.

Who knows, look after it, service it regularly, and like a Barbour jacket, a good pair of boots, or a Swiss watch, it might just last you a lifetime. It certainly feels like it could. 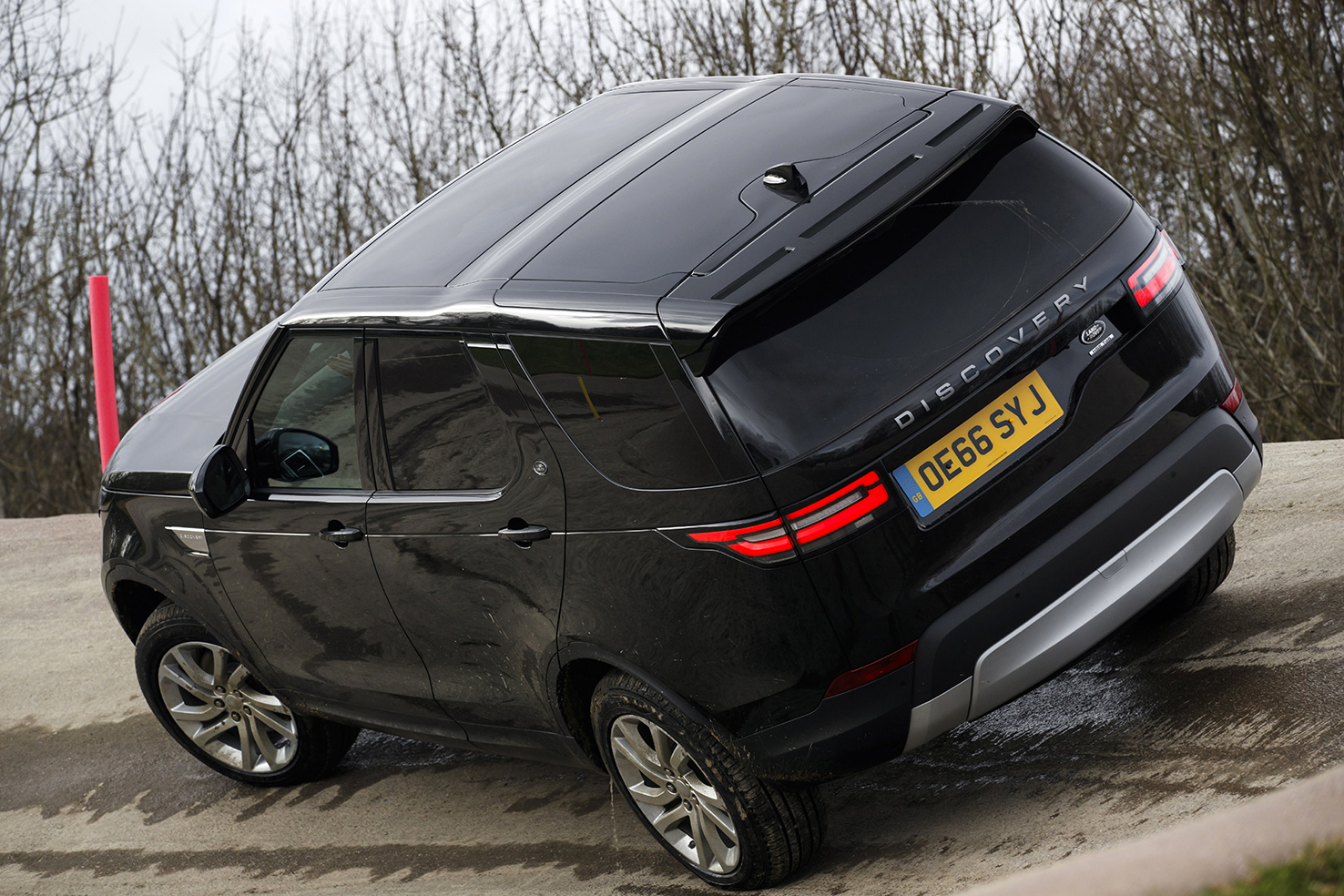