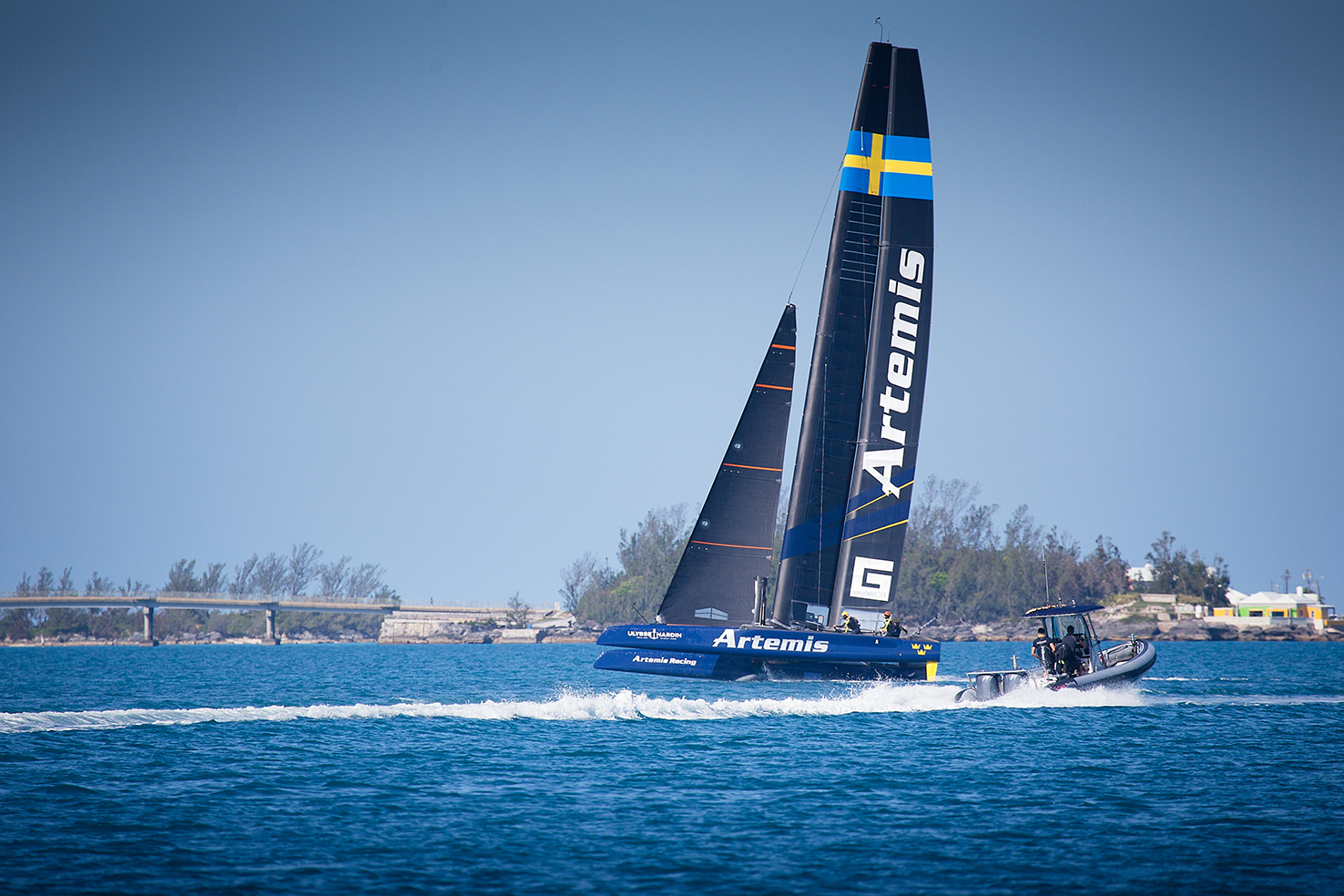 As the British challenge for this year’s America’s Cup gears up to compete for the oldest trophy in sport, Bay’s Nick Smith flew out to BERMUDA to see how preparations are coming along at Team Land Rover BAR’s swanky new headquarters on the island’s Great Sound. It was also a chance to dust off the Bermuda shorts and discover the attractions of a desert island less than a third of the size of Gower…

They look like nothing on earth. And while that might be something of an exaggeration, it’s fair to say that the America’s Cup boats, with their vertical aeroplane wings and hydrofoils that lift the twin hulls clean out of the water, are a far cry from the red-sailed Mirror dinghies that I used to sail in Swansea Bay when I was a kid. For one thing, they travel at three times the speed of the wind propelling them. For another, it costs millions to get them into the water. 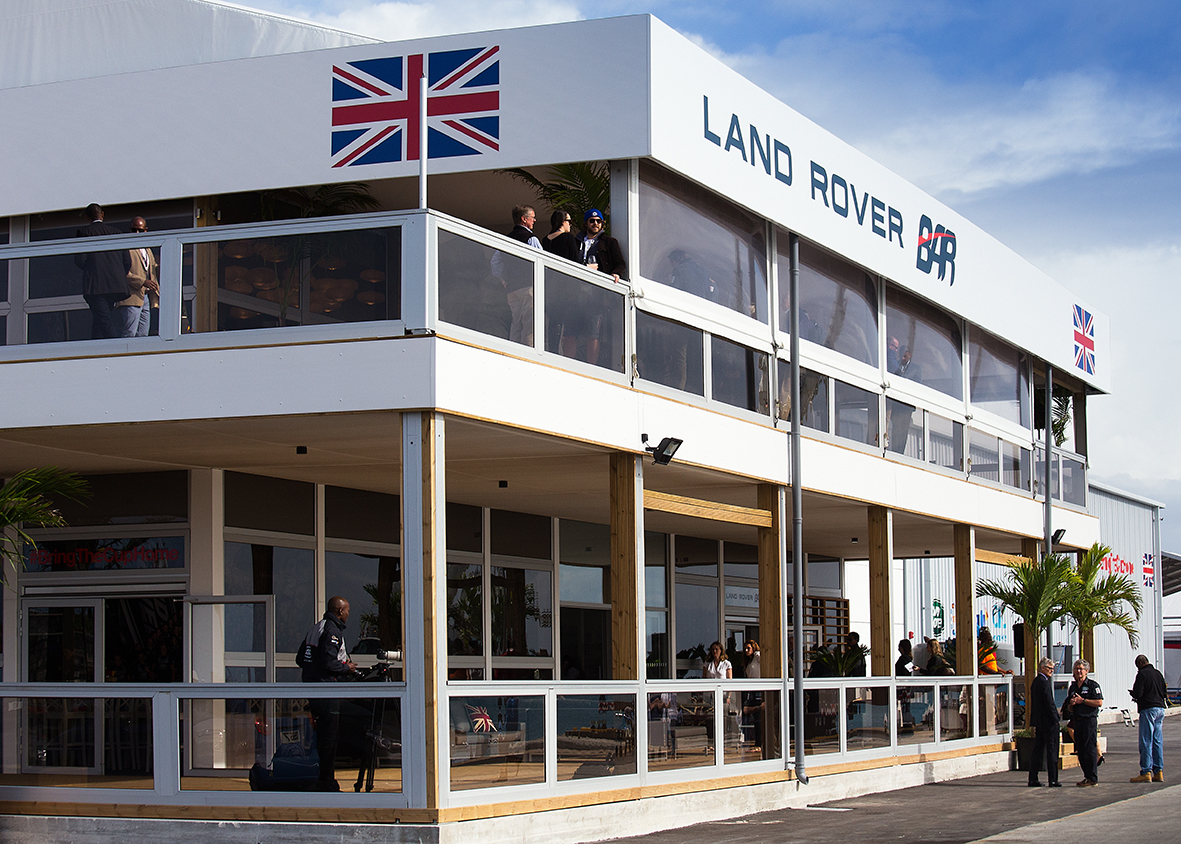 Even the language is different. When you talk to the technical guys at Land Rover BAR – the team mounting Britain’s challenge in next month’s America’s Cup – you won’t hear many old school nautical terms. These slick shark-like vessels aren’t ‘yachts’, they’re boats. The sails are ‘wings’ and when foiling they ‘fly’ with 99 per cent of the boat planing on L-shaped dagger boards the size of ironing boards. Their speed isn’t in knots but miles-per-hour, and the course they sail on is a ‘track’. The ‘skipper’ is ‘team principal’ and the word ‘catamaran’ is hardly ever used. That’s because these incredible feats of engineering are ‘multi-hulls’, competing in what has been called Formula 1 on water. That would be a good comparison if F1 cars were five times the height of a double-decker bus.

The 2017 event will be staged in Bermuda and it’s going to be something special. The world’s longest running sporting contest, the America’s Cup is also one of the least understood or publicised. But make no mistake, come the end of May, the pursuit of the ‘Auld Mug’ as the trophy is affectionately known, is going to be all over our TV screens, and for the first time the casual viewer will be able to follow it in a meaningful way. New rules and dynamic computer graphics will make the racing accessible and exciting. Where once the America’s Cup was all about slow wooden yachts sailing off into the blue to slug it out on the high seas, today it’s a series of inshore sprints, where TV cameras will capture every exhilarating moment. “We’re making the sport more relevant to the general consumer”, says Sir Ben Ainslie, who is the brains and the brawn behind Britain’s challenge. 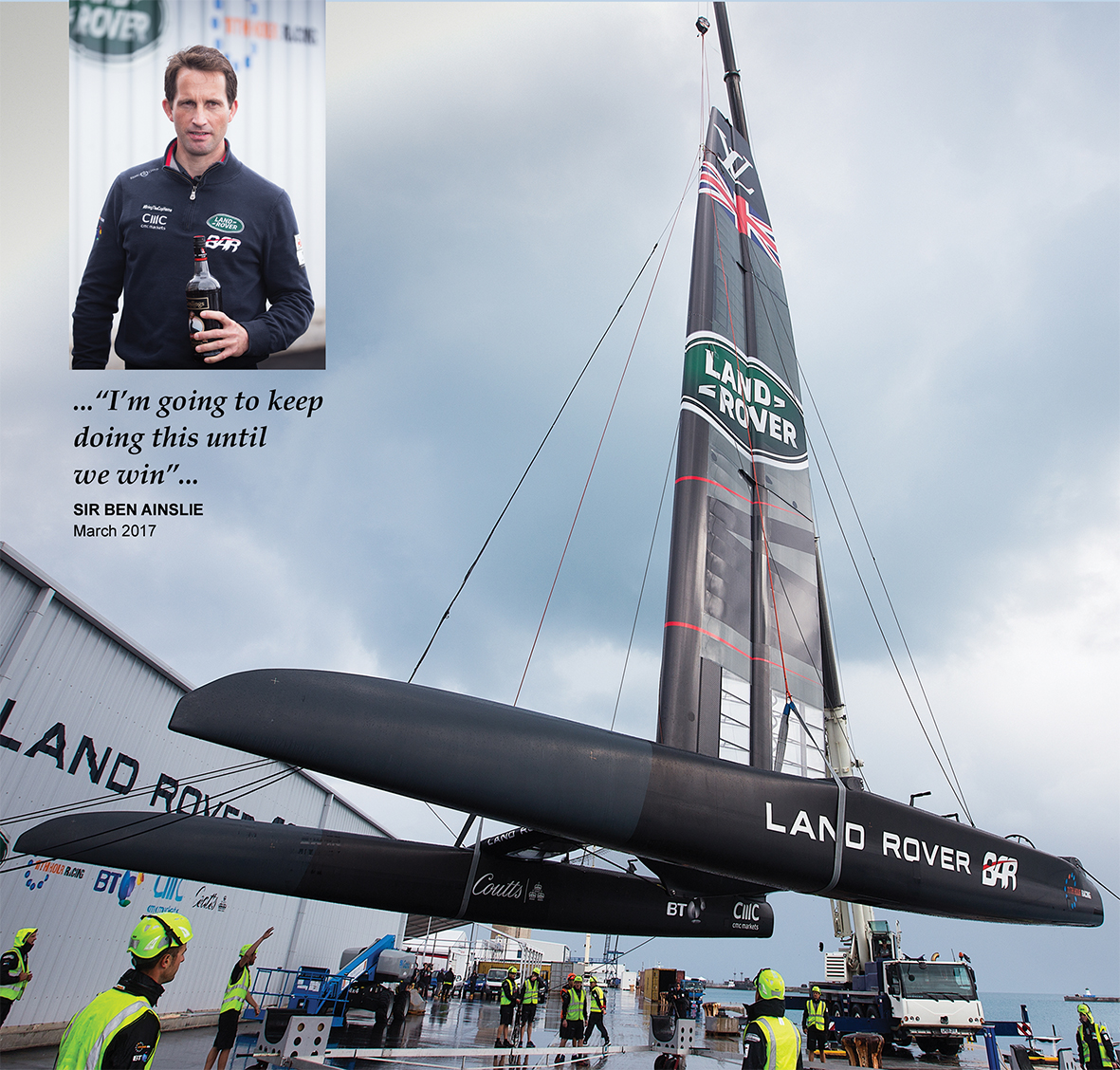 It’s big and it is clever. The official launch of Land Rover BAR’s challenger R2 – five times taller than a double decker bus

Ainslie is one of our greatest sportsmen, the most successful Olympic sailor in history. His name is legend and will forever be associated with one of the greatest fight-backs in sport, when in the 2013 America’s Cup he skippered the USA challenger ‘Oracle’ to victory in San Francisco Bay. Despite knowing the sweet taste of success, he says, “it still bothers British sailors that we have never brought the America’s Cup home, and I’m going to keep doing this until we win.” Ainslie is famous for his instinctive prowess as a sailor and the rare gift of perfect timing. If Team Land Rover BAR is going to win in Bermuda, he’ll need both. 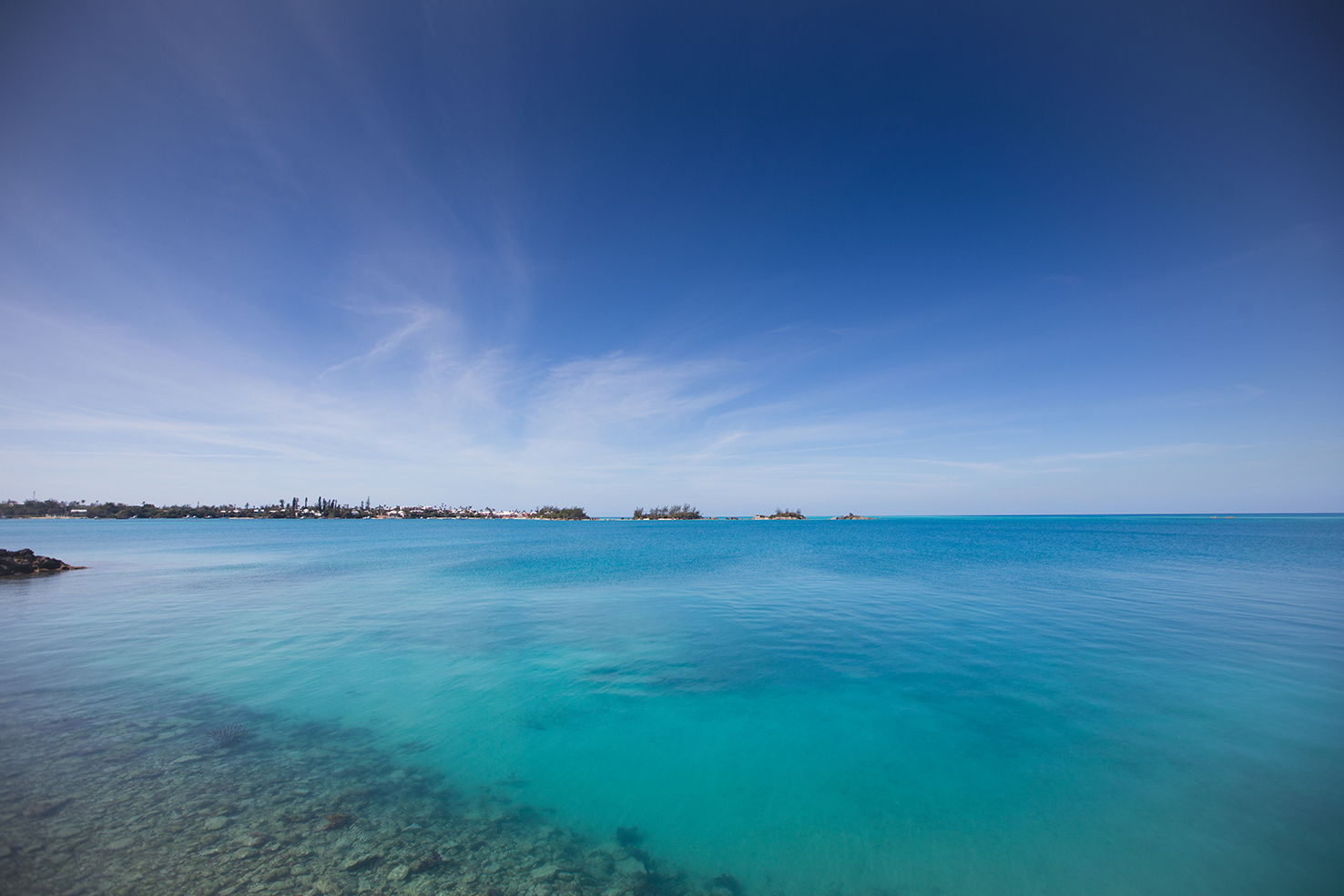 With its turquoise seas and cobalt skies, Bermuda is beautiful even when there’s nothing happening

I spoke to Ainslie at the new team HQ in Bermuda at the launch of the British challenge boat ‘R2’, where the nautical knight was on a serious charm offensive to get the sceptical UK media behind his team. The die-hard sports hacks out there told me that, with fearsome competition in the form of Sweden’s ‘Artemis’ and the USA’s ‘Oracle’, our only hope lies in having Ainslie at the helm. Despite his brilliance, Ainslie is Land Rover BAR’s rabbit’s foot, and without him, they would have only two chances of victory: slim and none. But the word defeat isn’t in Ainslie’s dictionary. “If I didn’t think we could win it, I wouldn’t be here.” 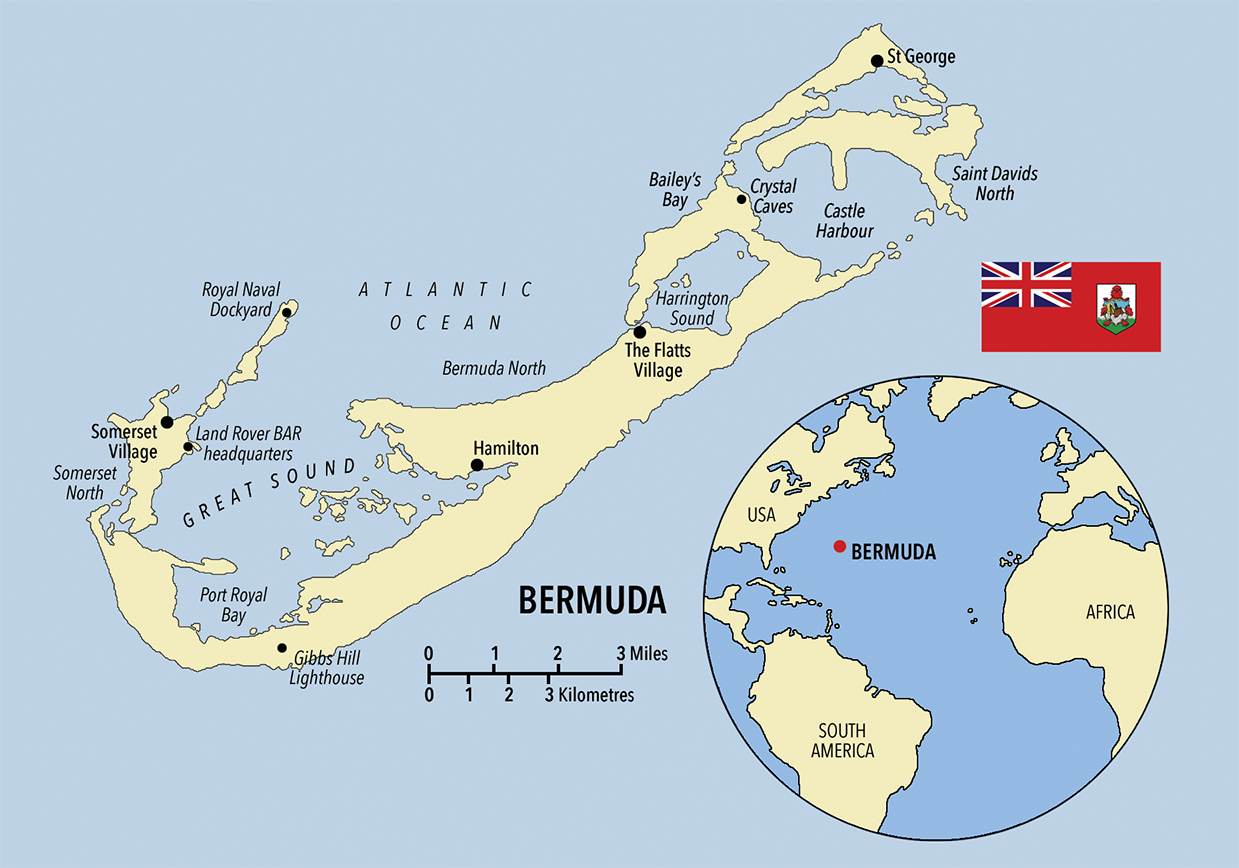 Bermuda is one of those exotic sounding places – like Timbuktu or Zanzibar – that everyone’s heard of and yet no one knows much about. If pushed, most will manage to dredge up a vague recollection of newspaper reports describing mysterious happenings in the so-called ‘Bermuda Triangle’, an empty patch of the ocean where ships and aeroplanes are said to disappear under paranormal circumstances. You might also encounter those who wear Bermuda shorts, a type of military knee-length trouser worn at barbecues. But beyond that, not much data will rise to the surface. I have to admit that, despite having sailed around the Caribbean on several occasions, I was pretty sure that Bermuda was part of the West Indies. But it’s not. It’s a tiny fleck of volcanic rock cast away in the middle of the Atlantic that had remained undiscovered until 1503, when Spanish sea captain Juan de Bermúdez first set eyes on the archipelago, mapped the coastline and in a fit of modesty named it after himself. 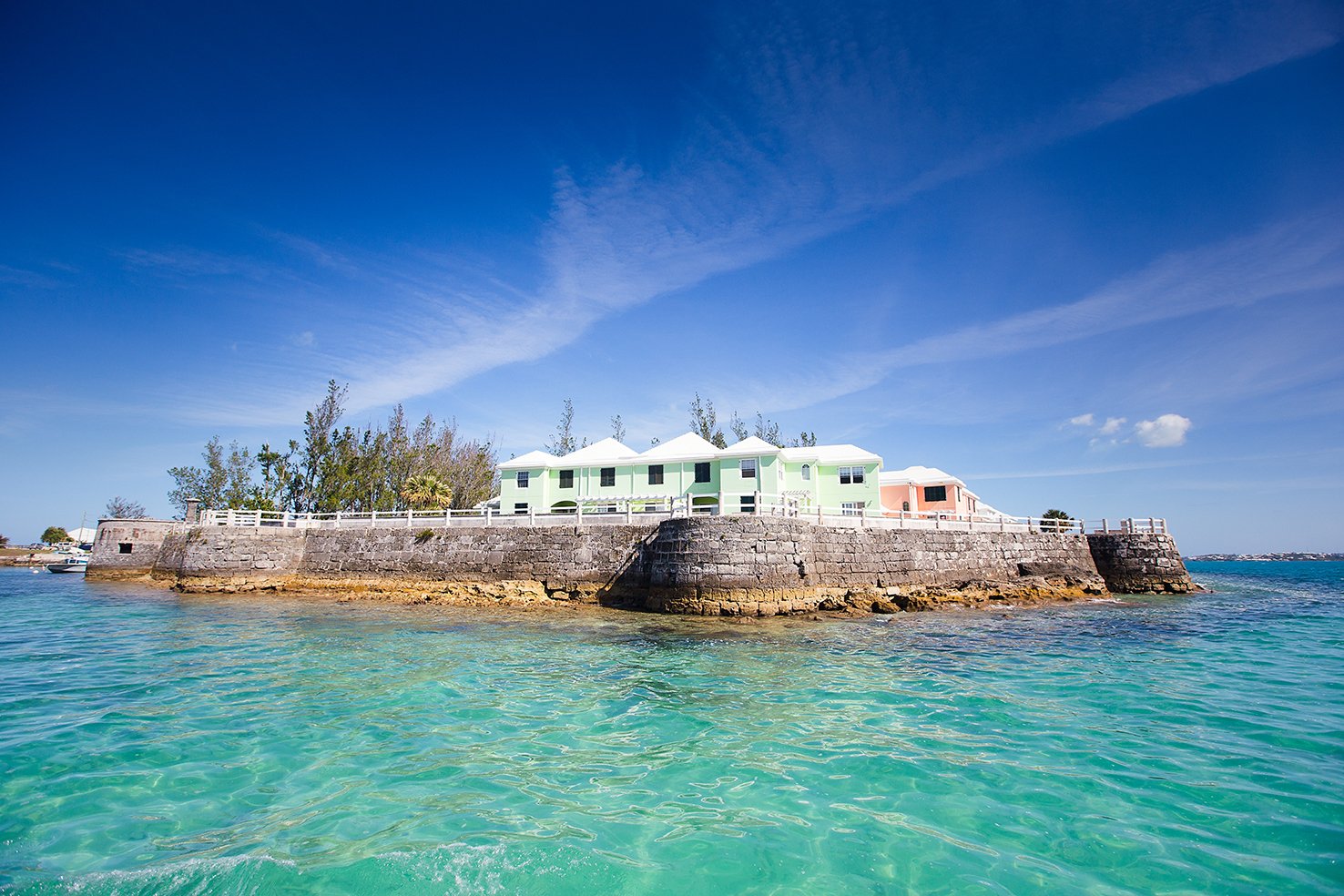 Somerset Village on the Great Sound, where properties overlooking the America’s Cup course can reach $10m

And so it was with real curiosity that I boarded my plane at Gatwick and settled in for the 7-hour flight that seemed to be a straightforward change from some of my farther flung adventures. There could be no doubt that I was on the right plane as nearly every body else was wearing Land Rover branded sailing gear while earnestly discussing marine hydraulic control systems and other such modern terms of the sea. With everyone connected to the British challenge on the plane, it more than once crossed my mind that if the Bermuda Triangle were more than just a ‘green ink’ rumour, there’d be very few left to hoist Britannia’s flag should anything go wrong. On arrival at what is now one of Her Majesty’s British Overseas Territories, I got my passport stamped and set off into the fossilised Britishness of driving on the left, red pillar-boxes and English accents.

My assignment was no more complex than to take a few photos of the launch ceremony, talk shop with Sir Ben and get back to Blighty in one piece. But as with so many adventures there was far more to this than initially met the eye. My first port of call was the team’s HQ on the Great Sound where Lady Ainslie was to christen R2 in the time-honoured way of smashing a bottle of champagne on the boat’s bow. Problem here is that nobody wants to attack a multi-million pound carbon-fibre precision vessel with a bottle, and so Land Rover BAR’s engineers had jury-rigged a bottle-smashing machine that would keep the glass fragments away from the boat while allowing the champagne – which was actually Nyetimber English method fizz – to flow freely in celebration. After three failed attempts in front of a phalanx of international TV camera crews, a defeated Lady Ainslie held her head in her hands, while one of the team engineers fetched a hammer. Lunging at the bottle, the technician missed several times, leaving Sir Ben looking like a man who didn’t know whether to laugh, cry or sack someone. 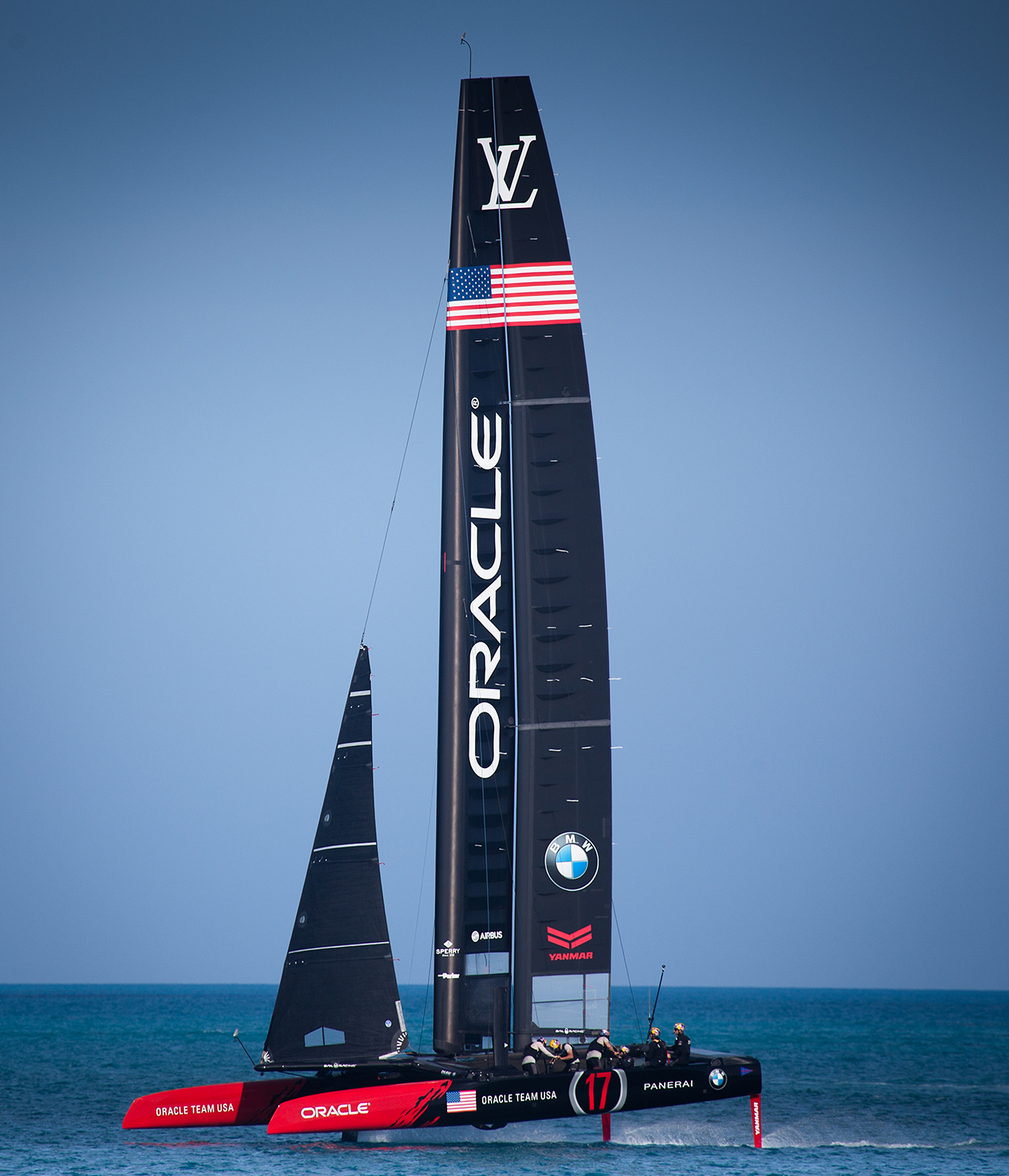 American challenger Oracle dwarfing the crew of six. Oracle is planing here with more than 99 per cent of the boat out of the water, routinely reaching speeds of 60mph

With the boat finally in the water and the storm clouds brewing, it was time to take to the sea. But with satellite weather imagery scuppering R2’s testing plans for the day, we were forced to abandon ship and trudge back to the hotel, while frustratingly both the Swedish and American boats were less cautiously haring around the sound. The guys at Land Rover sportingly offered to take us out in their speedboat to photograph them in action when conditions improved. And so on the following day we spent a couple of hours chasing these extraordinary craft, bouncing around on the white-tops while R2 remained resolutely in dock. 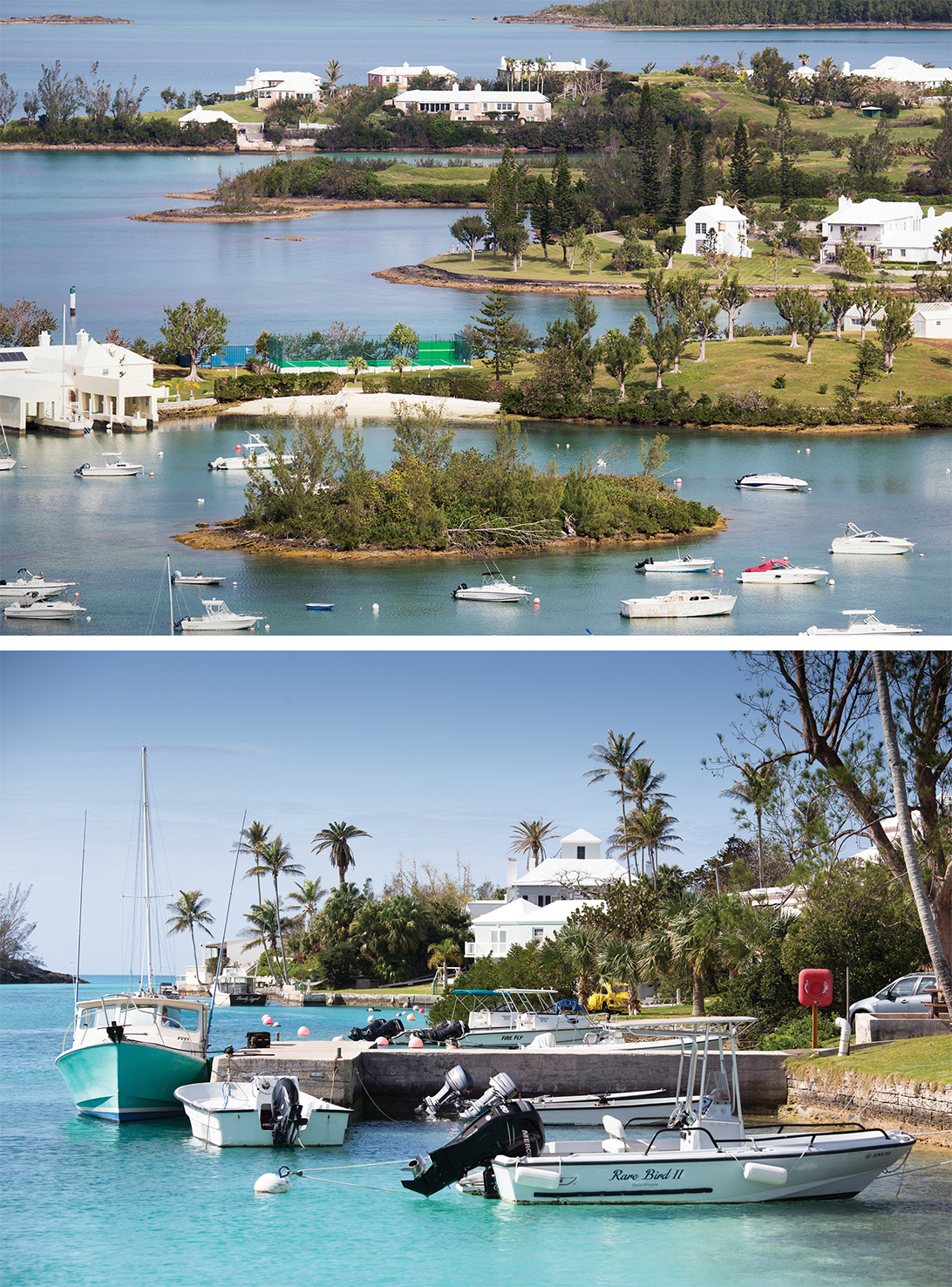 Pic top: Real estate in Port Royal Bay is some of the most sought after in the world Above: The sleepy little village of Flatts Inlet

It’s a rare thing to be on assignment with plenty of downtime. But as this was one of those occasions, it seemed that a spot of good old-fashioned sightseeing, if not house-hunting, might be on the cards (those picturesque pastel blue, pink or green villas overlooking the Great Sound will set you back north of $10million.) Being a volcanic archipelago there are plenty of caves to explore, the best of which is the Crystal system, where the first million dollar movie Neptune’s Daughter was shot in 1914, starring ‘the Mermaid’, Annette Kellerman.

The celebrated Australian swimmer, who shot to fame for being the first Hollywood starlet to appear   nude in  a  mainstream movie, was already something of a cause célèbre, having been arrested for appearing in an all too risqué ‘skirtless’ one-piece bathing suit on a public beach in the States. The charge of indecent exposure was eventually thrown out of court, leaving Kellerman at liberty to become one of the founding figures of synchronised swimming as well as a feminist icon. 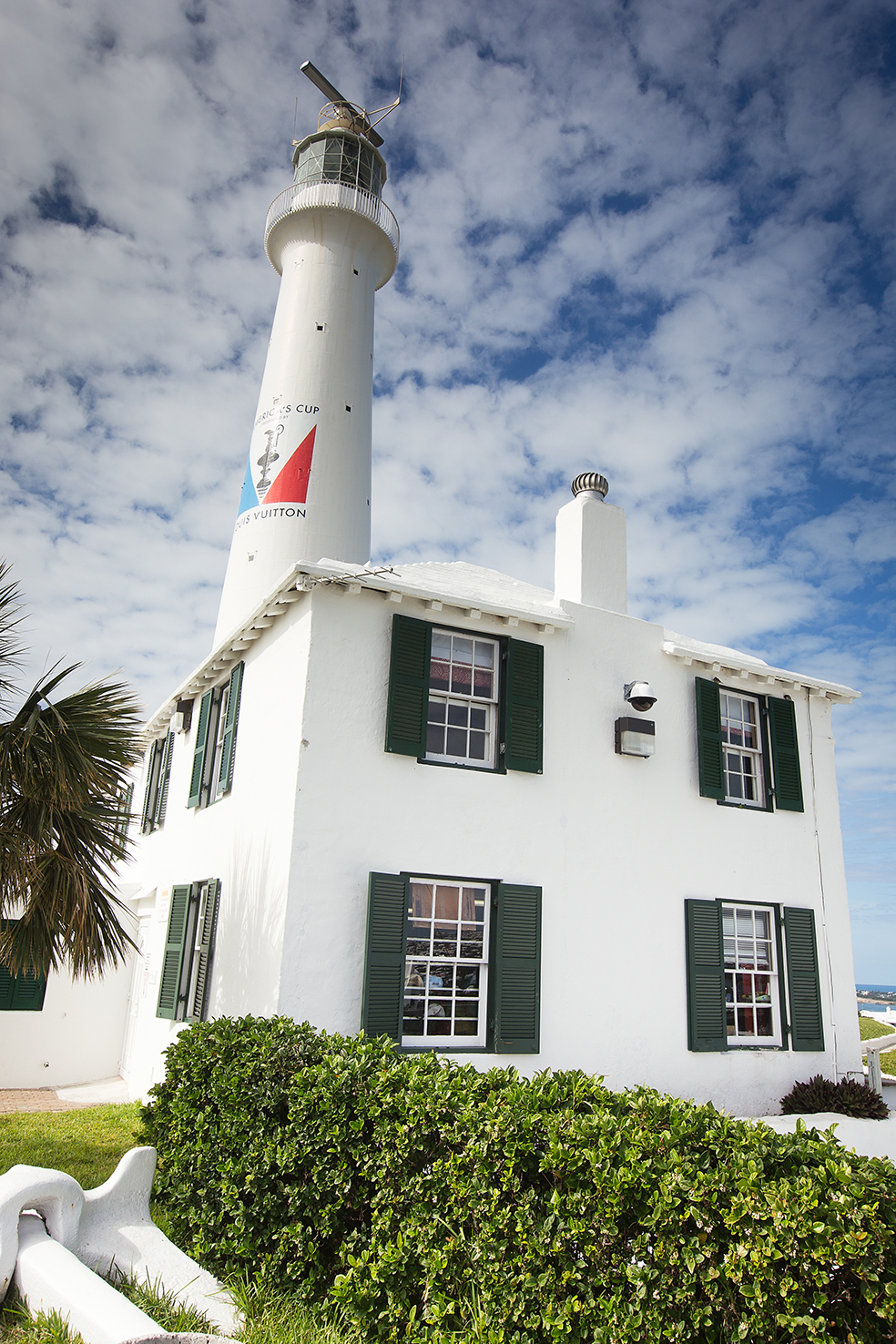 Inspired by such heroism, I made my way to Gibbs Hill, where the coast is dominated by a lighthouse which claims to be the first prefabricated cast iron building of its type. Today you won’t be able to miss it, not least because it is emblazoned with America’s Cup sponsor advertising from Louis Vuitton. After all these exertions, I needed a pick-me-up and so paid a visit to the headquarters of Gosling’s rum (the America’s Cup sponsor spirit), where I was treated to a potted history of the ‘Dark and Stormy’, a cocktail made from ginger beer and Gosling’s. Far more potent is the indigenous ‘swizzle’, a rum punch with as many recipes as there are local bars. It has passed into local legend that the first upright washing machine to arrive on Bermuda was used to create bulk quantities of swizzle. Once you’ve washed down a fried fish sandwich with a swizzle you know everything there is to know about traditional Bermudian cuisine.

two different views of Gibbs Hill lighthouse and a lesson in how to get your brand literally up in lights. Overlooking Port Royal Bay, Nick stands at the lookout point enjoyed by the Queen in 1953

It’s tempting to think that were it not for its sawn-off legwear, eponymous triangle and the America’s Cup, Bermuda might today be no more well-known than when our Spanish mariner first put the place on the map back in the Great Age of Sail. But it’s worth remembering that it was William Shakespeare who 400 years ago cast Bermuda as the location for his last great play The Tempest, writing of the island’s ‘sounds and sweet airs’. The Bard based his tropical tale of shipwrecked magic on the 1609 sinking of the Sea Venture on Bermuda’s shores that was making headlines all over Jacobean London at the time. Of course, when Sir Ben and his crew come to sail their ultra-modern boats over the start-line in May, they’ll be hoping that this isn’t a sign of things to come. 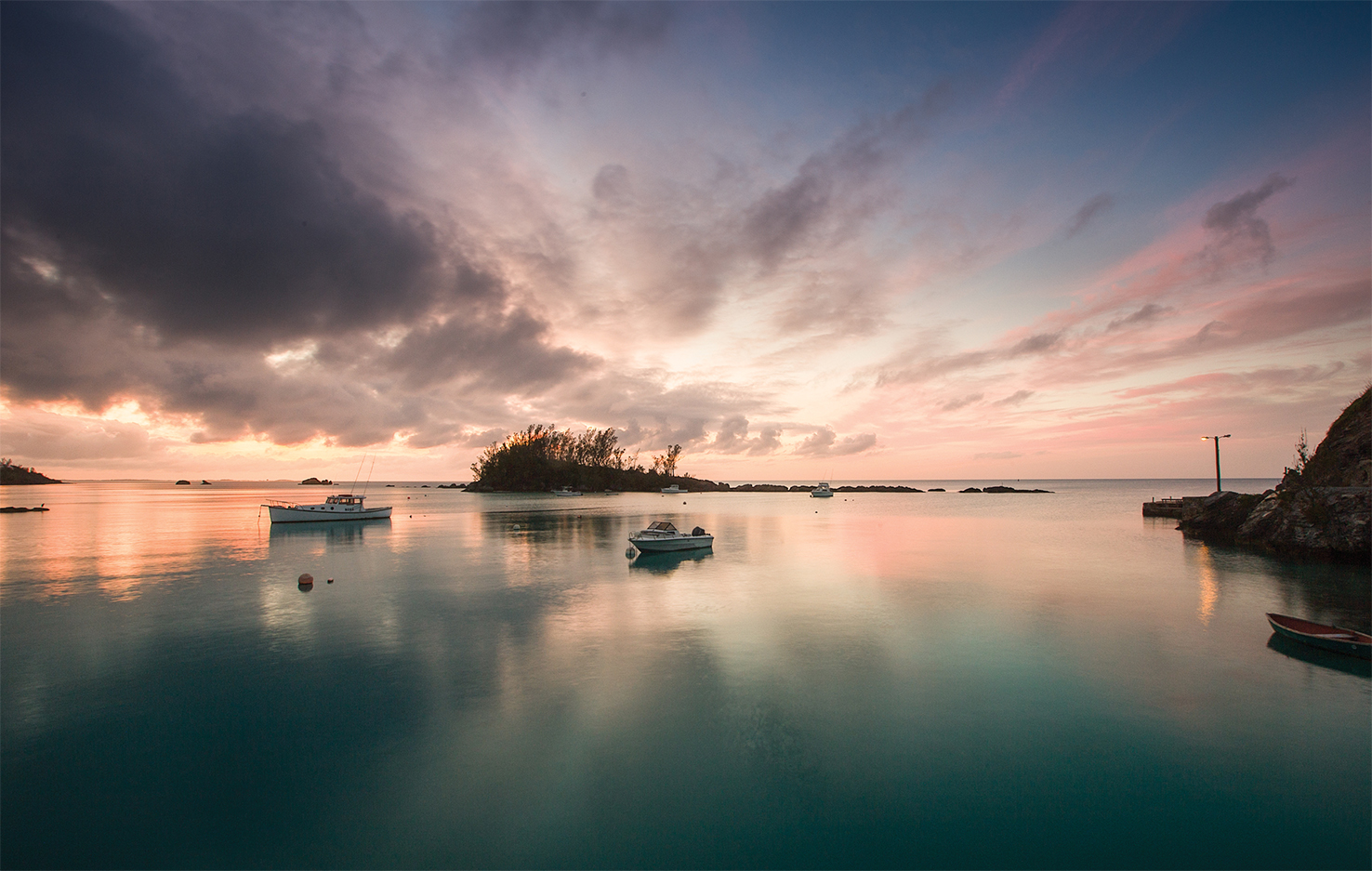