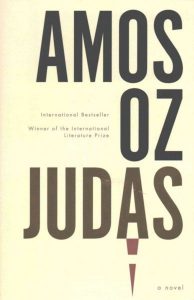 As has been the case since the first Booker International award in 2005, the literary standard of the submissions is very high—much higher than those for the Booker itself. Apart from the European entries, we look at the finest fiction from countries as farflung as Israel and Argentina.

The £50,000 prize is divided between the author and the translator of the winning entry, in acknowledgement of the literary excellence of both.

We have already reviewed one Israeli entry, Judas by Amos Oz in Bay Feb 2017; we now take a look at the shortlisted novels received. 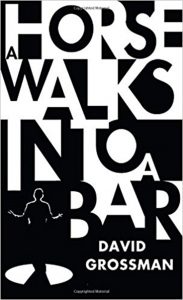 A HORSE WALKS INTO A BAR by David Grossman Translated from the Hebrew by Jessica Cohen (Jonathan Cape £14.99)

Israeli literary giant David Grossman is one of the greatest writers alive. His towering work, ‘Falling Out Of Time’ has been reviewed with awe in this column (July 2014): his new novel A Horse Walks Into A Bar has the same emotional authority and command of the paradigms of grief that makes you catch your breath at the awful psychological pain humankind can endure.

Veteran stand-up comic Dovaleh is performing in a nondescript club in the small Israeli town of Netanya, a performance aimed at his personal guest, his childhood companion, now a distinguished retired judge.

Dovaleh’s stage monologue comprises the major part of the narrative, involving his interaction with the audience, with hecklers and appreciative listeners and with the comings and goings of the assemblage.

His jokes edge ever more towards a narration of his life experience, gradually revealing the utter sadness of his bitter existence. And what of the special guest, the judge? Dovaleh’s references to their shared sojourn at the Gadna youth camp unleashes explosive images of personal tragedy and the shattering of his childhood in relentless detail — a virtual depiction of the traditional image of the crying clown.

Like his masterpiece Falling Out of Time Grossman’s  A Horse Walks Into A Bar is a howl of anguish from the depths of the soul of the protagonist. Dovaleh cannot cope with his memories alone anymore and seeks out his childhood friend to share his pain.

It is not easy to convey the power and the infinite pathos of this novel: A Horse Walks Into A Bar is a significant addition to the written annals of grief, inspiring the reader to share its poignant perspectives. 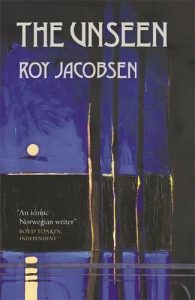 THE UNSEEN by Roy Jacobsen Translated from the Norwegian by Don Bartlett and Don Shaw (Maclehose Press £14.99)

Imagine a small island off the coast of Norway, battered by the sea, barely ac-cessible in winter, isolated and windswept. And now imagine a single family, grandfather Martin Barroy, his daughter Barbro, son Hans, Hans’ wife Maria and their daughter Ingrid as the sole inhabitants of this inhospitable acreage. It doesn’t seem the best scenario for a wonderfully warm story of human interaction in adversity but you will find yourself completely enchanted by the strong person-alities and off-the-wall situations in Roy Jacobsen’s The Unseen. The Barroys of Barroy Island are part of the community of small islanders scattered near the Norwegian coast, all visiting each other when the weather permits, one island the home of the school for all the inhabitants, the other with a manor house where the Barroy girls might find employment as maids.

Exotic visitors, labourers from Sweden, or fisherman — and neighbouring islanders provide occasional relief from the daily drudgery of battling the elements to carve out a living on Barroy. Jacobsen effect-ively portrays the rhythms of island life, the loneliness and the vulnerability with the changing sounds of the sea and the wind as the backdrop to an unfamiliar world.

The translators have done an excellent job of conveying the intensely local mood of this beautiful novel, communicating an understanding of the melancholy and the joys of this singular island existence. 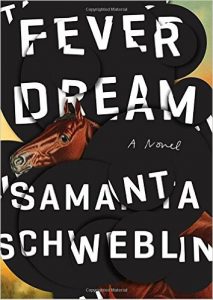 FEVER DREAM by Samantha Schweblin Translated from the Spanish by Megan McDowell (Oneworld £12.99)

When her husband Omar’s prized stallion suddenly falls ill and her son David follows suit, Carla is full of terror and fears for their lives. The woman in the green house only makes matters worse by initiating a shaman-like ‘soul migration’. The plot thickens with the arrival of the unwitting vacationer Amanda who takes up residence in the holiday home next door with

Samantha Schweblin’s compelling and beautifully structured narrative sustains the mystery through-out this novella, earning it a place in the Booker International shortlist. 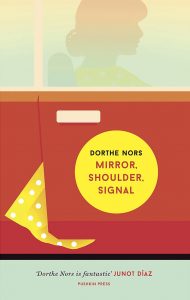 Driving lessons as a paradigm for the daily struggle to deal with life? Meet successful professional translator Sonja, heroine of Danish writer Dorthe Nors’ entry Mirror, Shoulder, Signal. Sonja struggles to cope with ordin-ary challenges — including learning to drive. This Danish novel is a stimulating depiction of the pressures of modern urban life on a sensitive protagonist, sharply observed and succinctly written — a literary novel by a woman about a woman which is quite a find.

It is a submission perhaps lacking in the gravitas of stronger contenders for the Booker International shortlist, but is nonetheless a fine novel, worthy of the most discerning bookshelves. 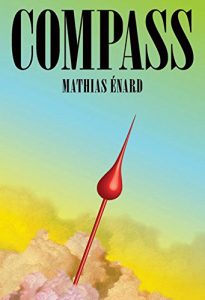 COMPASS by Mathias Enard  Translated from the French by Charlotte Mandell (Fitzcarraldo Editions £14.99)

The River Danube links, along its course, Catholic, Orthodox, Jewish and Moslem countries and their faiths, with all the cultural co-mingling of these religions. In his novel Compass, Mathias Enard’s takes his narrative and his protagonist, musicologist Franz Ritter on a journey through the literature, politics, etymology, music and political and cultural history of the regions and their people.

Compass is set in Austria and reads like a history textbook written in old fashioned stream-of-consciousness prose, giving the reader a feeling of déjà vu — we are all familiar with the history of Europe and Enard’s dated style is well-worn, much used since James Joyce first employed it.

Does Enard bring anything new to the literary table? Imbuing Byzantine Europe with a totally questionable glamour, the narrative is an exercise in gratuitous place and people name-dropping, a parade of tiresome snobbery. This ego trip rarely throws any light on the non-events of the novel. Rambling, self-aggrandising and dreary, Compass reads more like a failed doctoral thesis than any expression of literary erudition.

The one that got away!!! 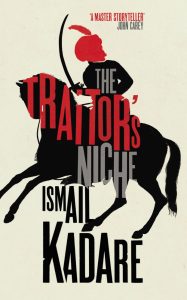 Ismail Kadare’s superb novel The Traitor’s Niche has not made it to the 2017 Booker International shortlist probably because he has already won the first ever Booker International award in 2005. Whatever the reasons for its omission, the fact remains that the novel is outstanding and must be showcased along with the rest of the shortlist in the interests of fairness.

I was thrilled and excited to be reading my first novel written by an Albanian author. Like most of us, my memory bank retains only the vaguest smattering of information about this remote Balkan state.

Kadare takes us back to an era when Albania was still an uneasy part of the Ottoman empire, when the Emperor struggled to keep control of the more remote members of his hegemony. Kadare uses the gory locale of The Traitors’ Niche, in a square in central Constantinople where the decapitated heads of rebellious Pashas were displayed, as a setting for a savage satire of brutal conquest and suppression.

In the course of Kadare’s narrative of the life and death of Ali Pasha, ruler of Albania, he describes, step by step, how an entire culture is systematically obliterated by a determined government. The method for this crime is related in awful detail, starting with massacre of all leaders, progressing onto the physical destruction of all cultural expressions, the destruction of monuments and written works, the proscription of the language —- using all the tools of totalitarian insanity that human history has witnessed around the world.

The Traitor’s Niche is an epochal work, a controlled expose of the worst of despotic rule, unparalleled in the depth and width of the author’s historical analysis. Through it all, Kadare’s passionate love of his country glimmers, bejewelled by his perfect prose, his wry humour and his scathing observation.