MOTHS – the word immediately conjures up images of the drab little creatures that come fluttering out of the trunk of old woollens in the attic after having nibbled countless holes into Granddad’s jumper and given Grandma’s fur collar a rather patchy haircut. It is just as well that they are not in the habit of receiving visits from their relatives the hawk-moths which would be a rather more startling sight, shooting out of the trunk at 5 metres per second on their two inch wings. 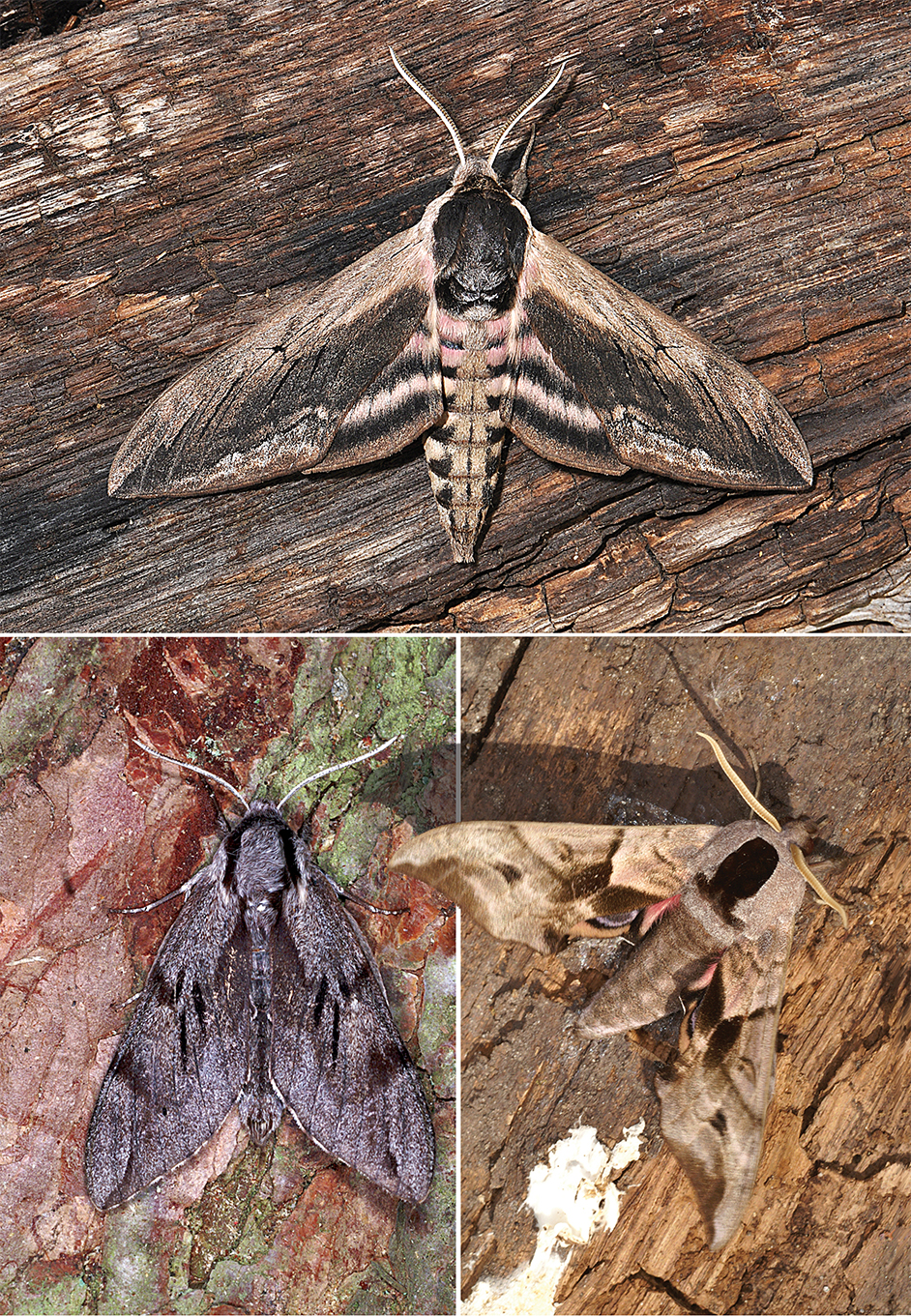 Their often impressive size, streamlined shape, and powerful flight along with the ability to hover on the spot make the nine resident British hawk-moth species (family Sphingidae) virtually unmistakeable. The eminent entomologist and writer Vladimir Nabokov (who is perhaps best known for his novel ‘Lolita‘) was very fond of hawk-moths and, in his memoirs, describes them as ‘the jets of my childhood’.

The largest of our miniature jets is the Privet Hawk-moth (Sphinx ligustri), which reaches a wing span of 12 cm and a body length of over 5 cm (photo 1). During the day it often rests on tree trunks with its wings tightly folded, which leaves it very well camouflaged. It may be confused with the Pine Hawk-moth (Sphinx pinastri) which, though slightly smaller, is of somewhat similar appearance and habits (photo 2). The Pine Hawk-moth, whose larvae feed primarily on Scots Pine and Norway Spruce, is usually found in – or in close proximity of – coniferous woodlands, whereas the Privet Hawk-moth, whose larvae develop on a wider range of broad-leaved food plants including privet, lilac, holly and ash, is encountered in a much greater variety of habitats including parks and gardens.

Another large and well camouflaged species, is the Eyed Hawk-moth (Smerinthus ocellata) (photo 3), whose larvae usually feed on willow. In addition to relying on its disguise, the Eyed Hawk-moth has a pair of blue and black eyespots on its pinkish hindwings which make for an effective startle display when the animal suddenly exposes them on being attacked. The individual in photo 3 is in the process of warming up its flight muscles prior to take-off by quickly vibrating its semi-opened wings. 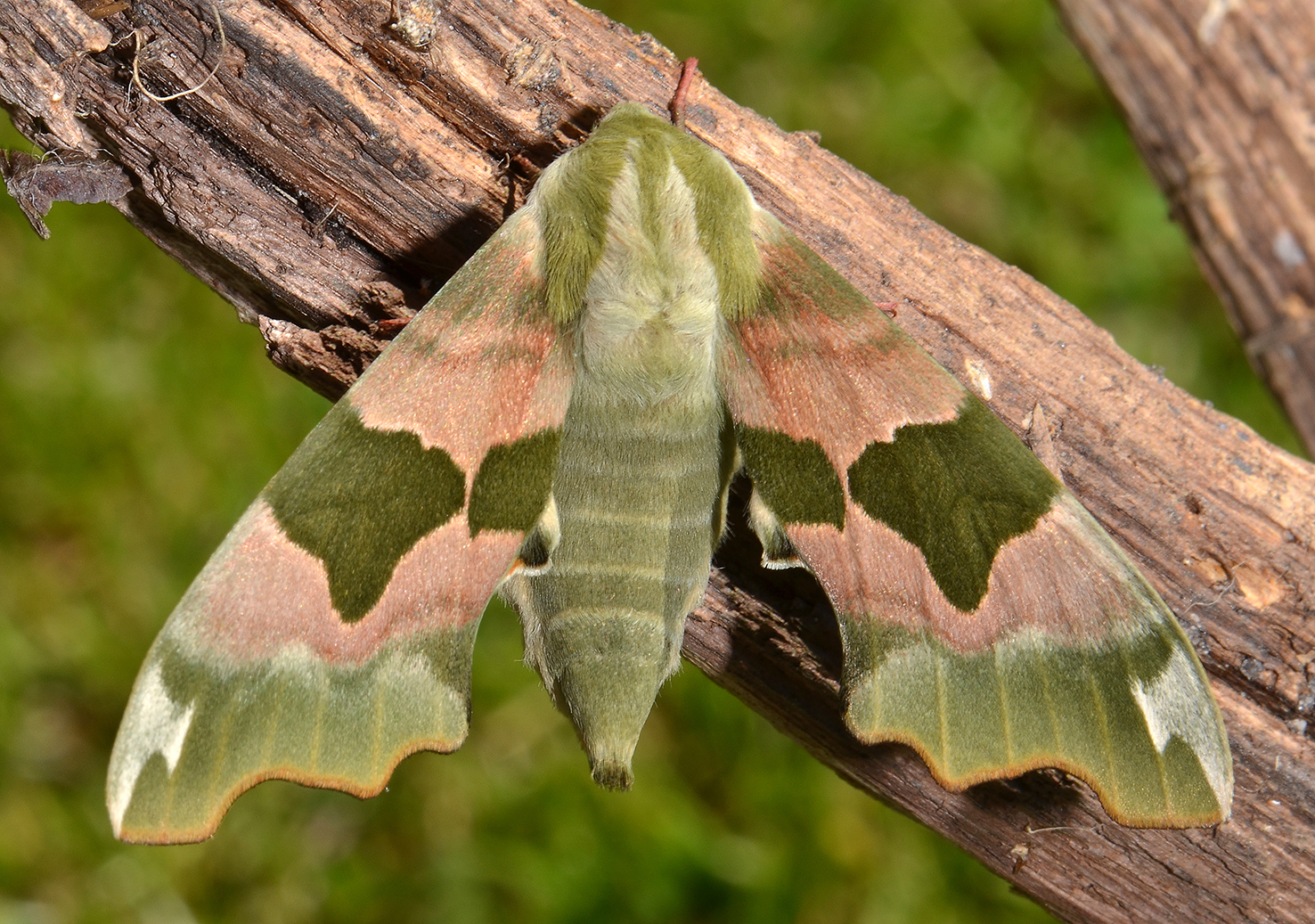 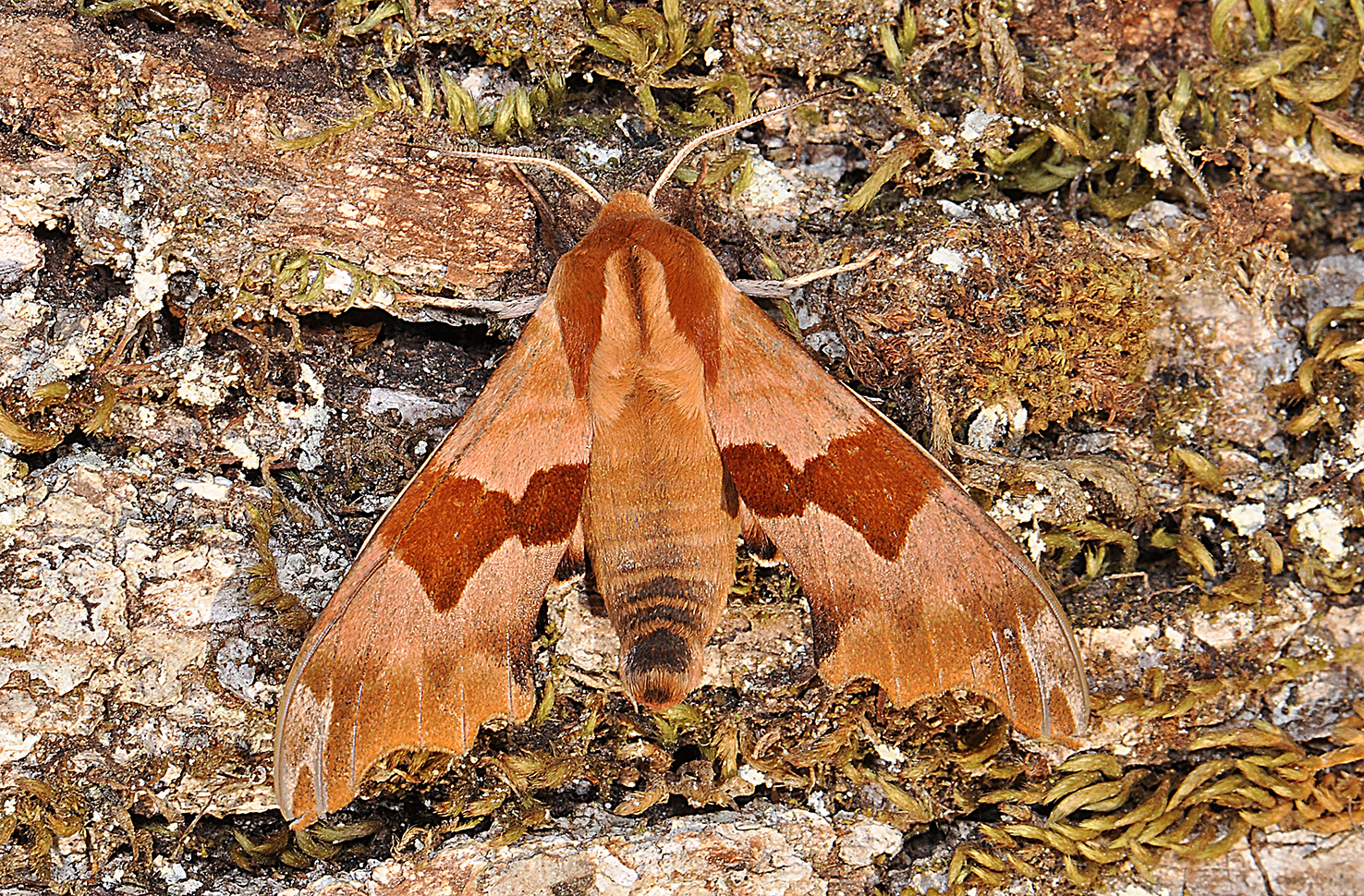 By no means all hawk-moths are dull-coloured bark mimics though. Lime Hawk-moths (Mimas tiliae), for example, come in several different attractive colour forms such as those shown in photos 4 and 5. While these colours and patterns would stand out on a plain background, they render the animals almost invisible when they are resting among leaves in the dappled light of their woodland habitat. Contrary to most other hawk-moths, adult Lime Hawk-moths do not feed. The females emerge from their pupae with their eggs already developed, so that the only jobs they have to do as adults are finding a mate and distributing their 100 or so eggs, which are laid in pairs on the undersides of leaves, usually high up in the canopy. The larvae can develop on a range of trees including lime, alder, birch and elm. 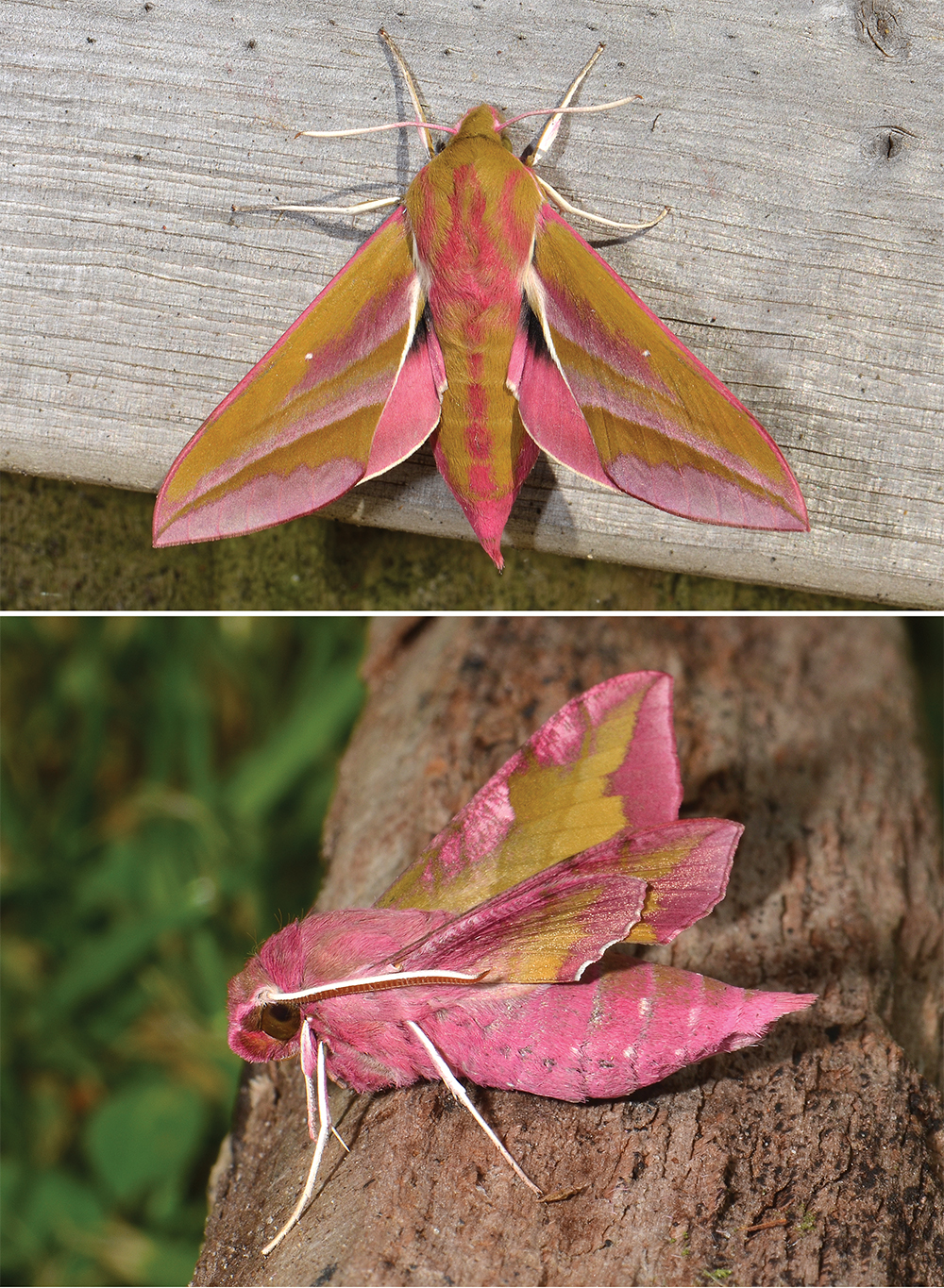 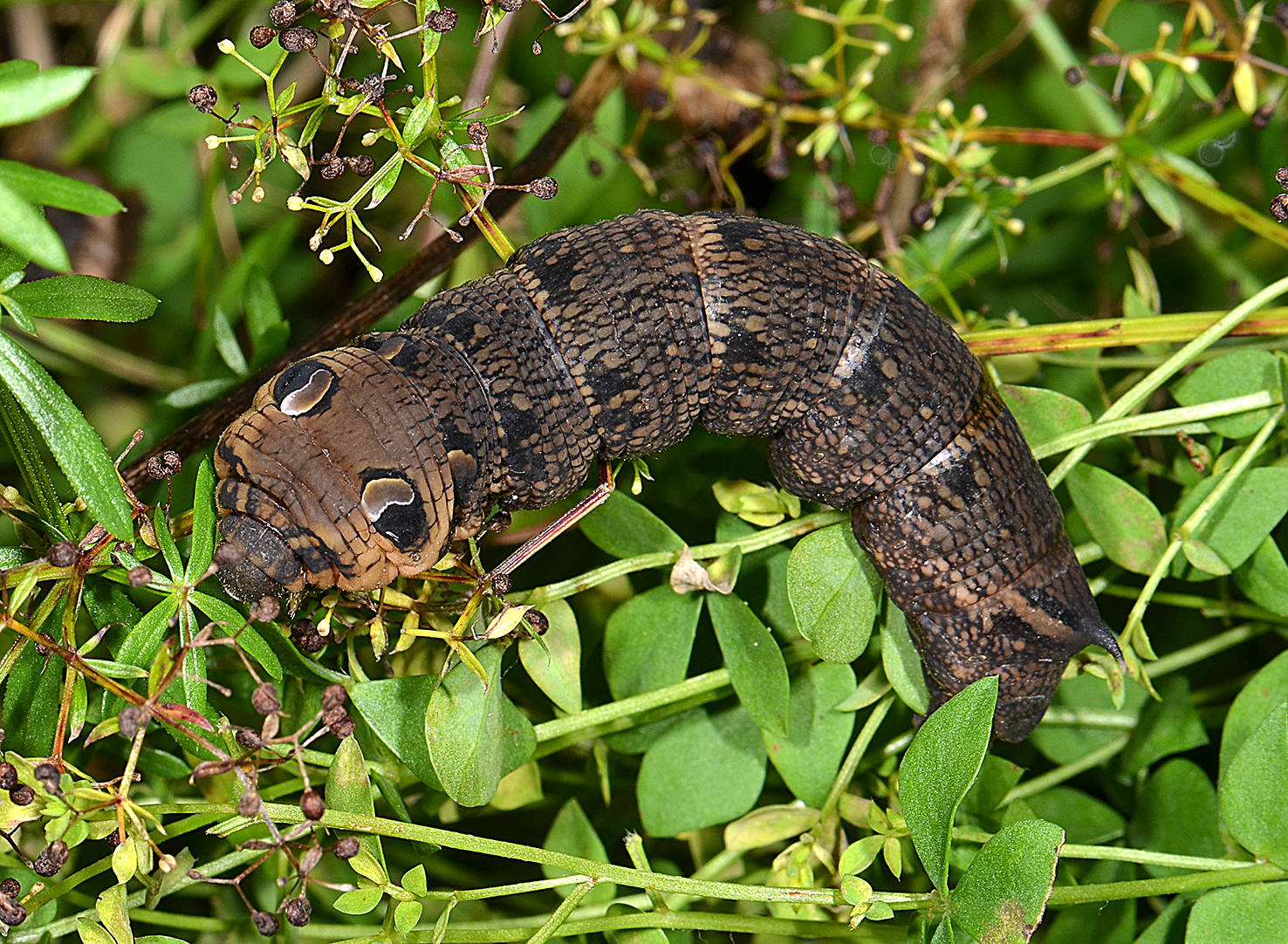 Even more striking, and certainly the height of current fashion, are the almost artificial-looking bright pink patterns of the Elephant Hawk-moth (Deilephila elpenor) (photo 6) and the Small Elephant Hawk-moth (Deilephila porcellus) (photo 7). The elephant hawk-moths get their name from their rather less fashionable looking larvae, which bear a certain resemblance to elephant trunks, especially when walking along with their tapering front end fully extended. If they are startled they tuck their head in tightly which helps to enlarge a pair of eyespots on their backs, and when touched Elephant Hawk-moth larvae whip around quite forcefully, probably in the hope of passing for small snakes rather than the exceptionally large and juicy caterpillars that they are (photo 8). Small Elephant Hawk-moth larvae, on the other hand, attempt to make themselves unattractive by playing dead very convincingly if an attacker is not deterred by their initial eyespot ruse. Given their unusual looks and habits, it is not surprising that fully grown elephant hawk-moth caterpillars frequently cause conster- 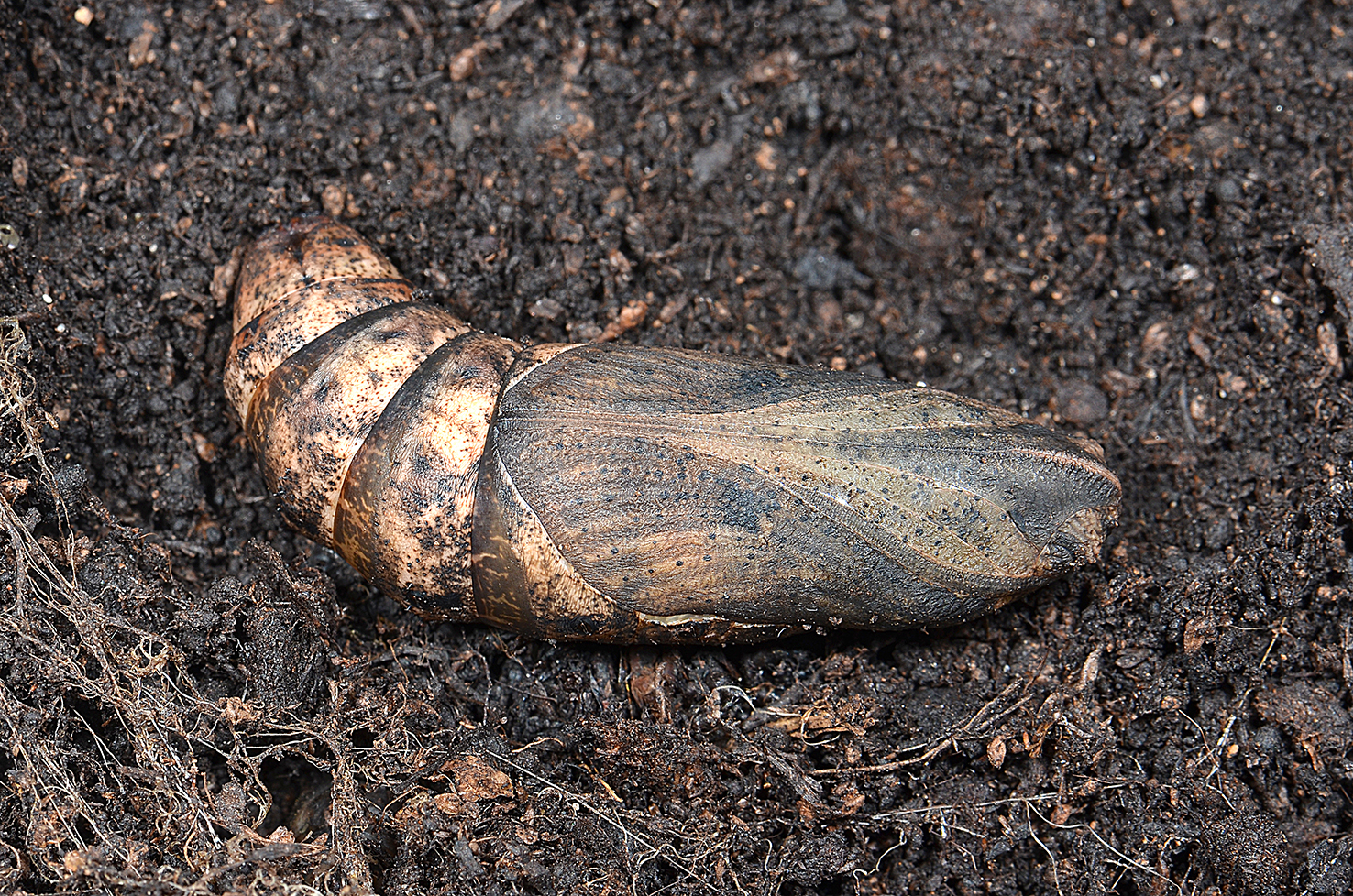 nation when they are spotted wandering around on the ground, having left their food plant (usually willow-herb or bedstraw) in search of a suitable spot for pupation and overwintering. Unlike most hawk-moths, they spin a cocoon among leaf litter to pupate in (photo 9). Most other species bury themselves in loose soil or hide away under moss or among plant roots. 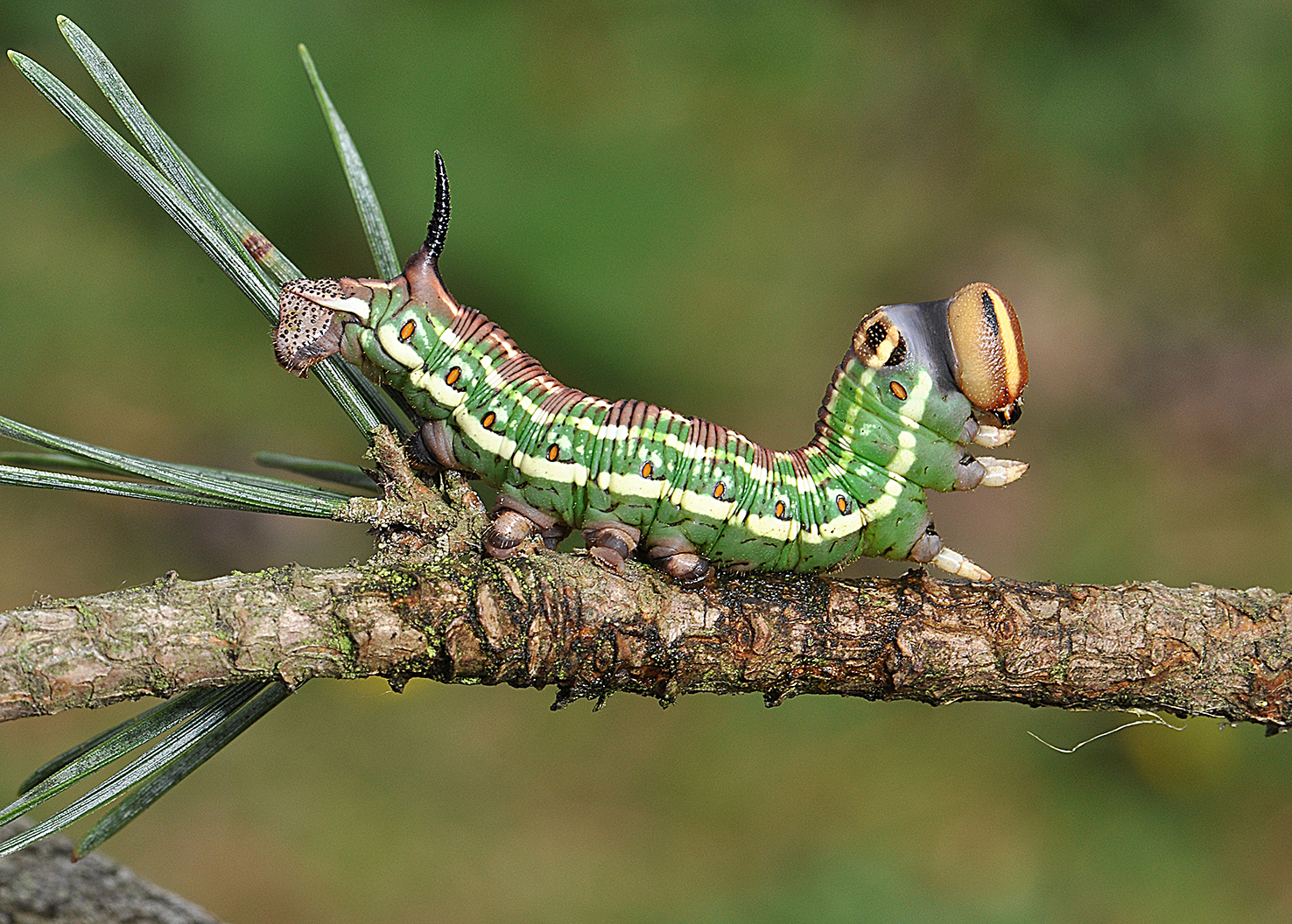 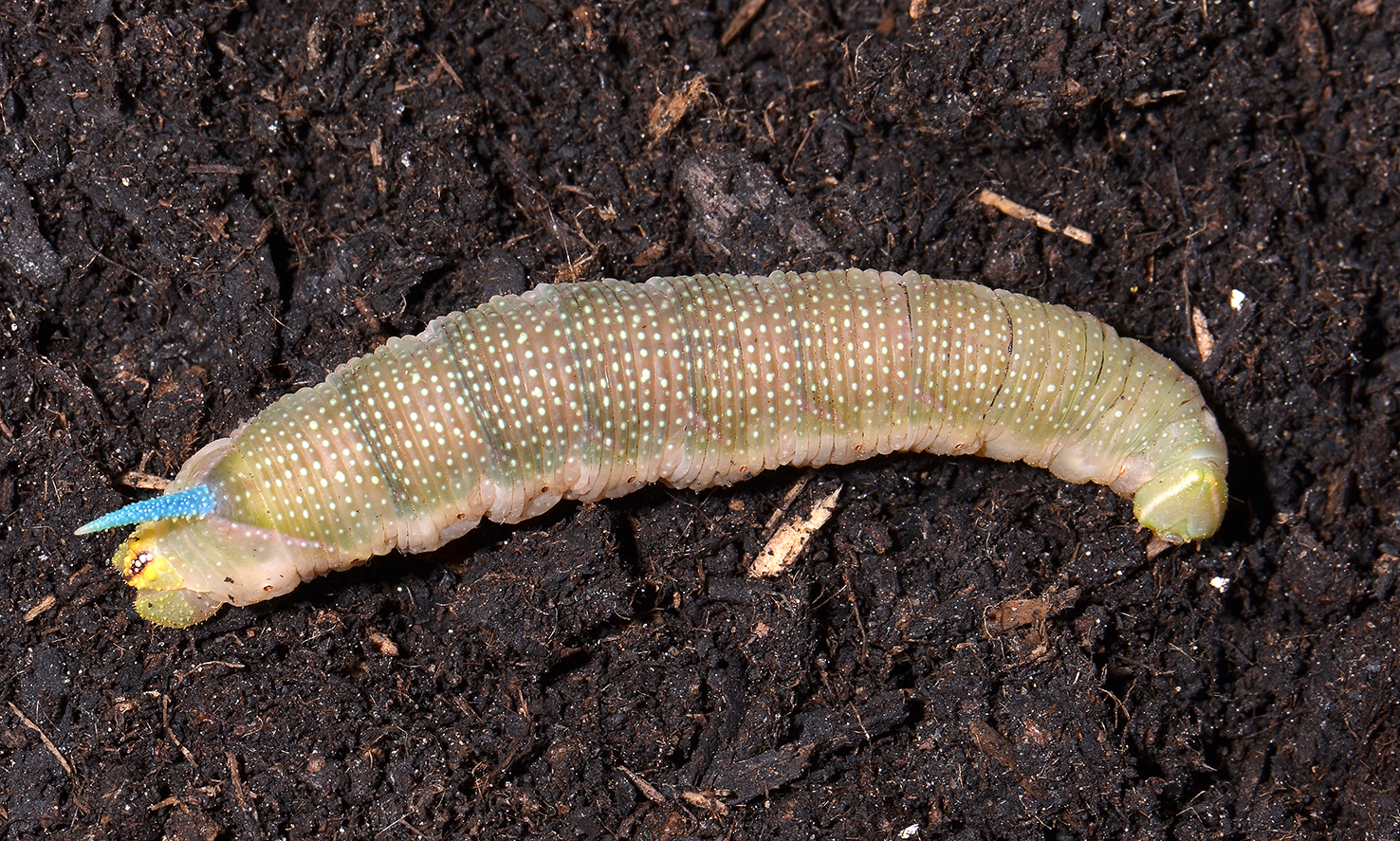 The larvae of other species of hawk-moths, including those that would have developed high up in trees, are also most frequently encountered at this wandering pre-pupation stage. They all possess a distinctive little ‘horn’ at the tip of their  abdomen, and many are colourful and rather attractive. Some species have a number of different larval colour forms and, again depending on species, sometimes an individual caterpillar goes through a series of colour changes in the course of its development. Pine Hawk-moth larvae, for example, hatch out yellow, after which they turn green with pale stripes. Later, they become more intricately patterned (photo 10) and some take on a rich brown colour as they mature. Lime Hawk-moth larvae are less variable, being predominantly green with pale stripes before turning a greyish buff colour just before pupation, but with their horn retaining its rather remarkable shade of turquoise (photo 11). The more muted colour of the fully grown caterpillars probably protects them by rendering them less conspicuous when they venture onto the ground. 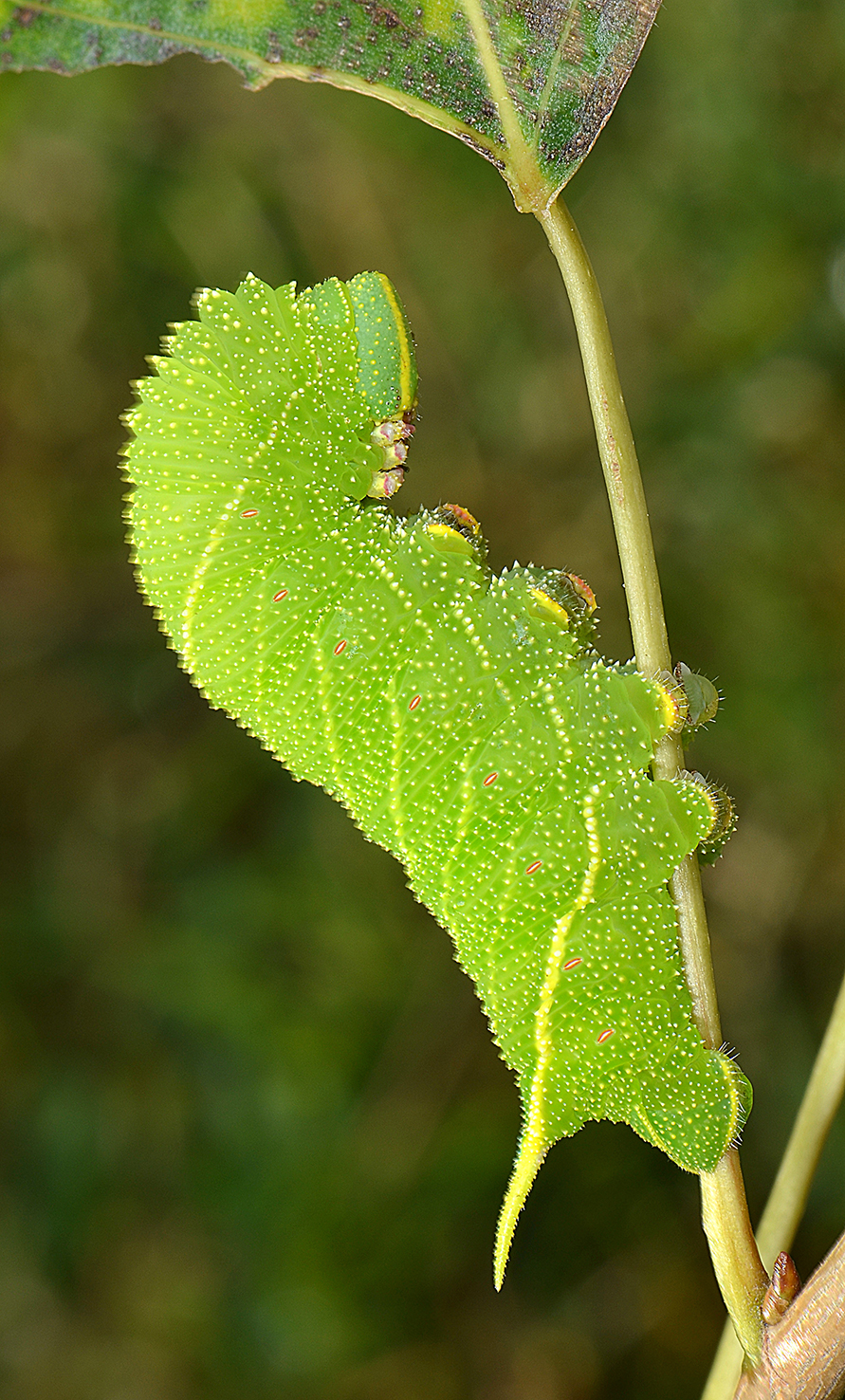 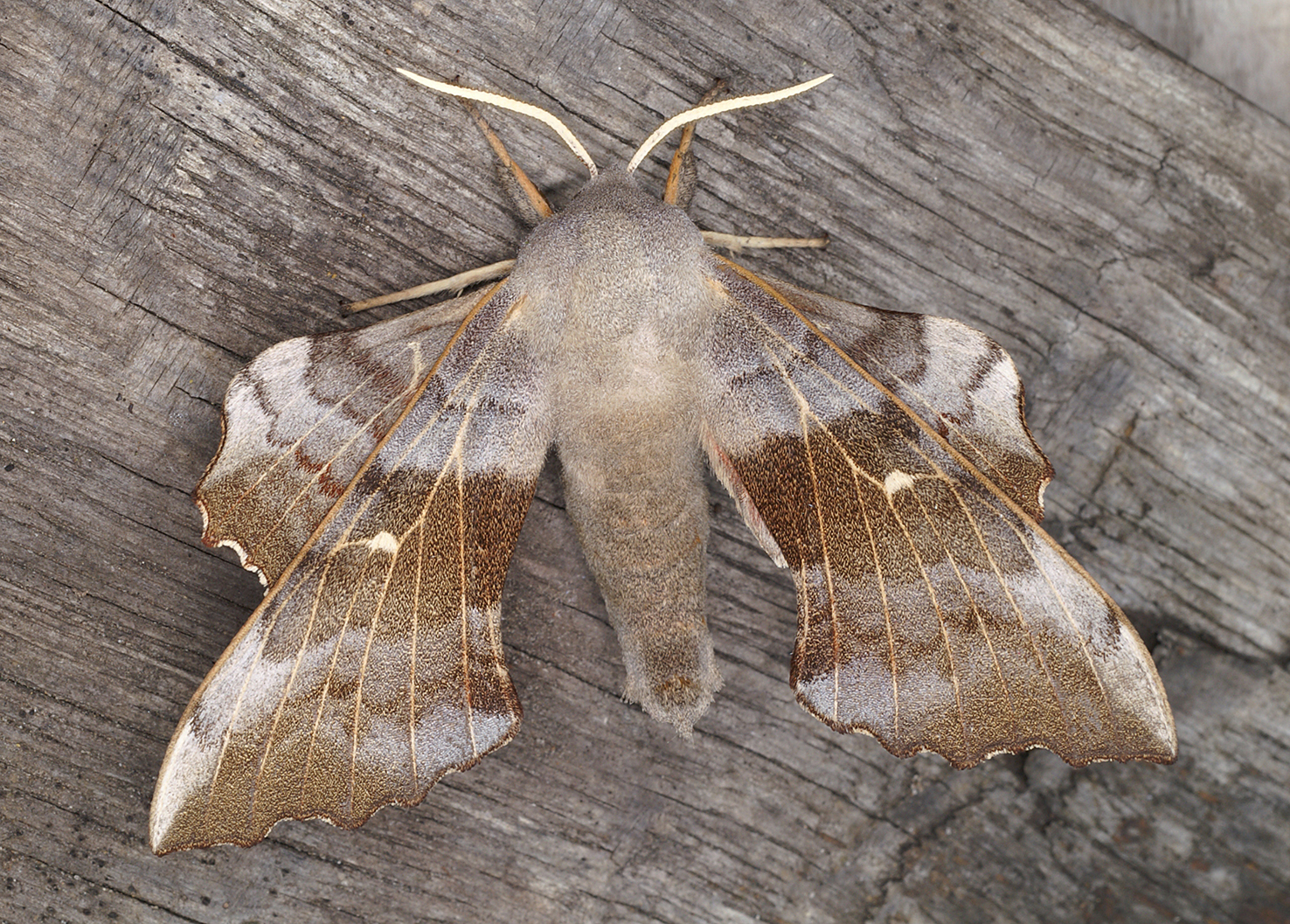 The Poplar Hawk-moth, while being a virtually picture-perfect example of a typical hawk-moth in its larval stage during which it feeds on poplars and willows, turns into quite the opposite once adult. This is due its unusual habit of resting with its hindwings sticking out in front of its forewings, which makes it look quite unlike any other British moth (photo 13).

Our two little bee hawk-moths can also cause confusion because they so closely resemble bumblebees, both in appearance and the fact that they are active during the day. The two British species are very similar to each other, but can be distinguished by their slightly different patterning as well as the width of the coloured border on their virtually clear wings, which is wider in the Broad-bordered Bee Hawk-moth (Hemaris fuciformis) (photo 14) than in the Narrow-bordered Bee Hawk-moth (Hemaris tityus) (photo 15). The larvae of the former are usually found on honeysuckle whereas those of the latter often develop on Devil’s-bit Scabious. 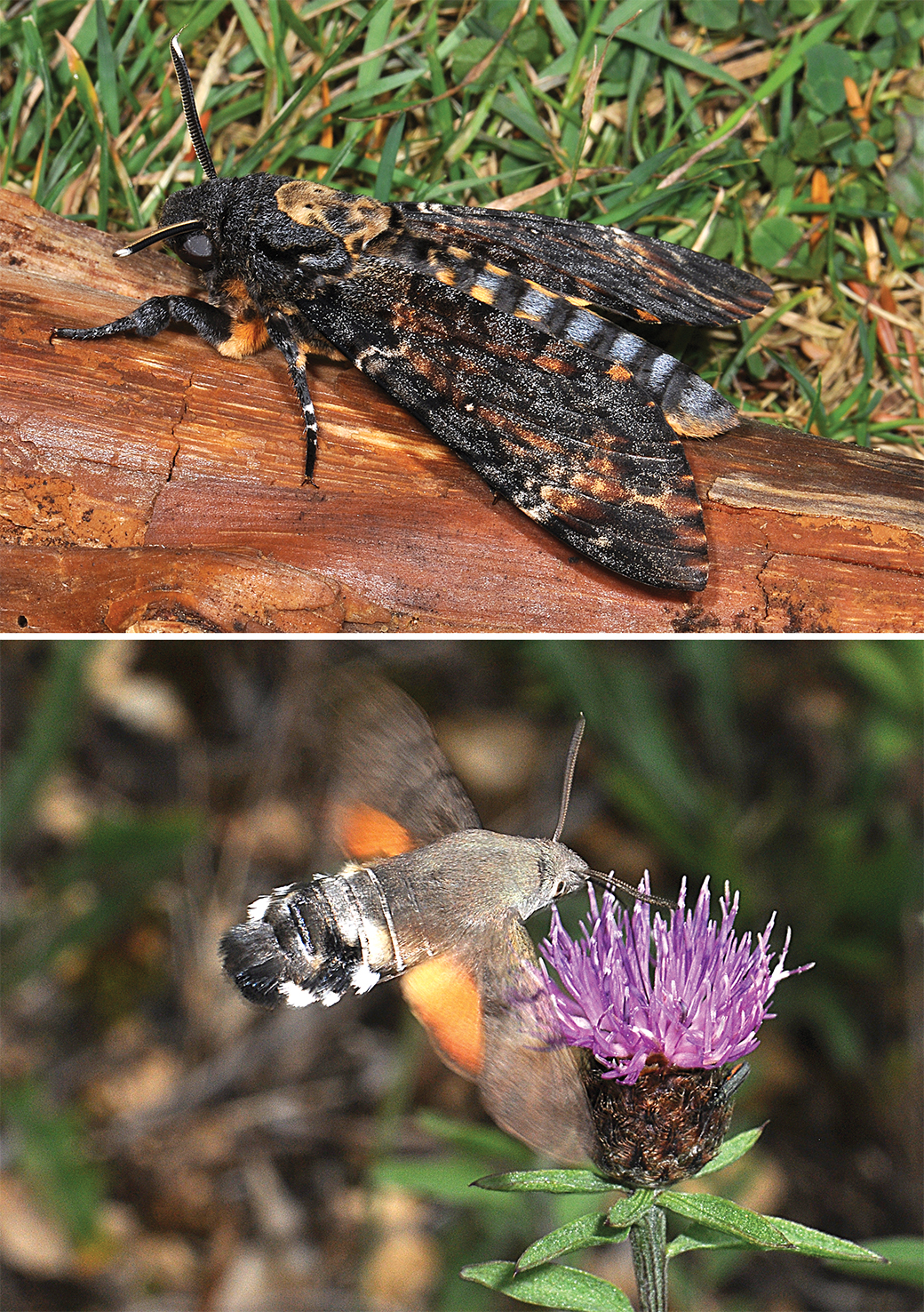 Our resident hawk-moths fly between May and July, and adults are hardly ever seen at other times of the year. During the summer, however, we frequently receive visitors from continental Europe and even Africa. A total of nine species have so far made it across the water on a number of occasions, including the Death’s Head Hawk-moth (Acherontia atropos) of ‘Silence of the Lambs’ cinematic fame (photo 16). Although very large, it is entirely harmless and owes its unsavoury name to the unusual pattern on its thorax.

While only a few dozen Death’s Head Hawk-moths are recorded each year, a smaller and extremely charming species, the Hummingbird Hawk-moth (Macroglossum stellatarum) regularly visits in some numbers, on average around 5000 each year. Hummingbird Hawk-moths are active during the day, making it easy to observe their fascinating hummingbird-like hovering as they feed from a variety of flowers with their exceptionally long  proboscis (photo 17). In recent years there have been occasional reports of adult Hummingbird Hawk-moths successfully overwintering in milder parts of the country, so perhaps this wonderful embodiment of everything hawk-moth will soon help to bring our resident hawk-moth tally up to a perfect ten.

PHOTOs courtesy of Paul D. Brook. His latest bestseller A comprehensive guide to Insects of Britain & Ireland (Pisces 2015) covers more than 2100 species and is available from www.naturebureau.co.uk/bookshop or call 01635 550380