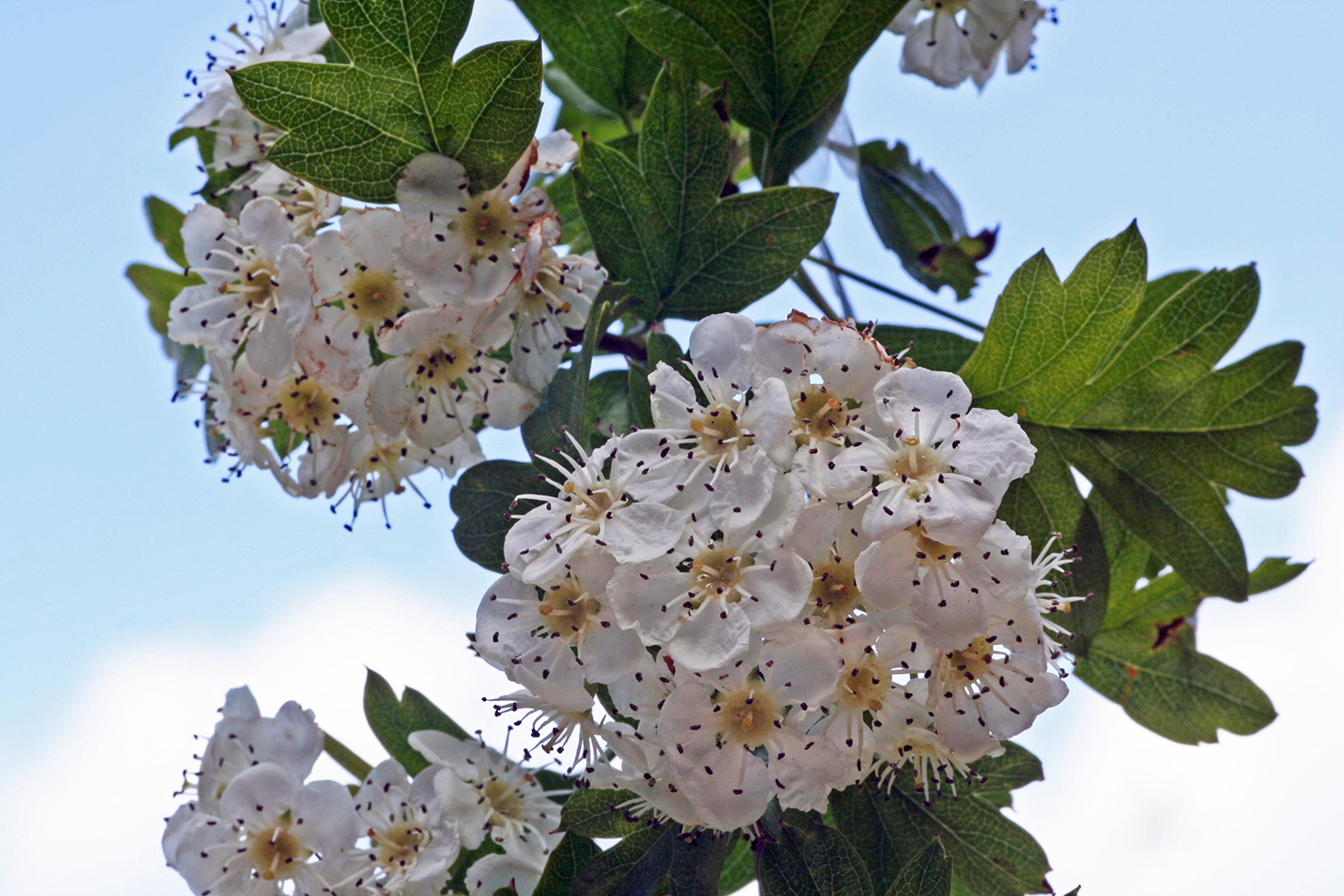 Many trees flower without anyone being any the wiser, either because their flowers are out of sight high up in the canopy or wind pollinated and as a result not particularly showy, or both. But then there are those whose flowering is so quintessentially linked to our experience of a season that it would not feel complete without them. And what would spring be without the glorious white blossoms of Hawthorn, Blackthorn & Co.? 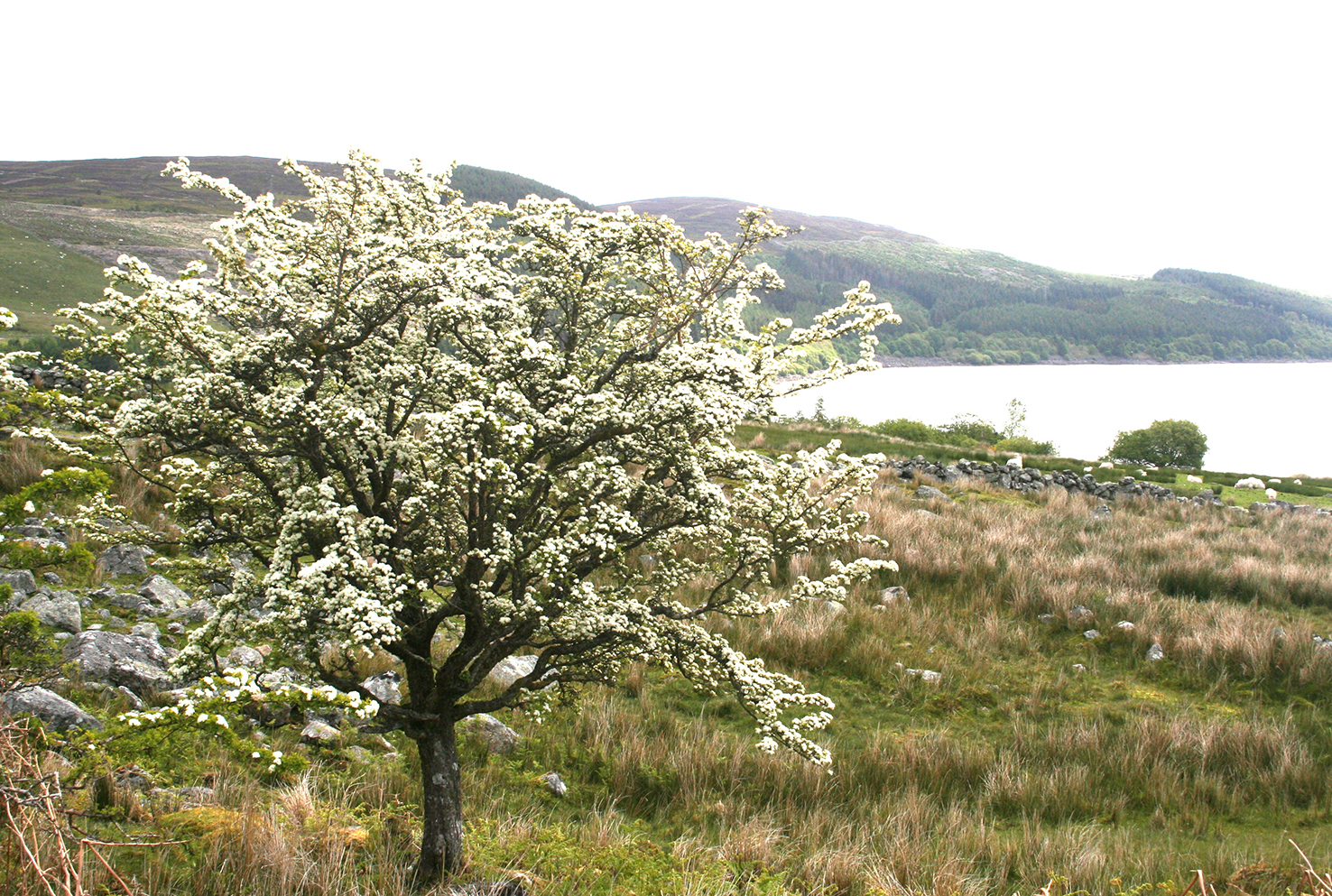 Given that both Common Hawthorn (Crataegus monogyna) and Blackthorn (Prunus spinosa) are members of the rose family (Rosaceae), it is perhaps not too surprising that they are not particularly coy about showing off their flowers (photo 1). They are exceptionally resilient plants which can take a lot of pruning and layering, and are able to put up with otherwise difficult circumstances such as poor soil and exposure. As a result, they are most often seen in hedgerows or as wind-pruned shrubs, and it is easily forgotten that they are, in fact, small trees (photo 2). Left to its own devices and given good growing conditions, Common Hawthorn can reach a height of 10 metres and live for several hundred years. Blackthorn does not grow quite as tall and only lives for around 100 years. 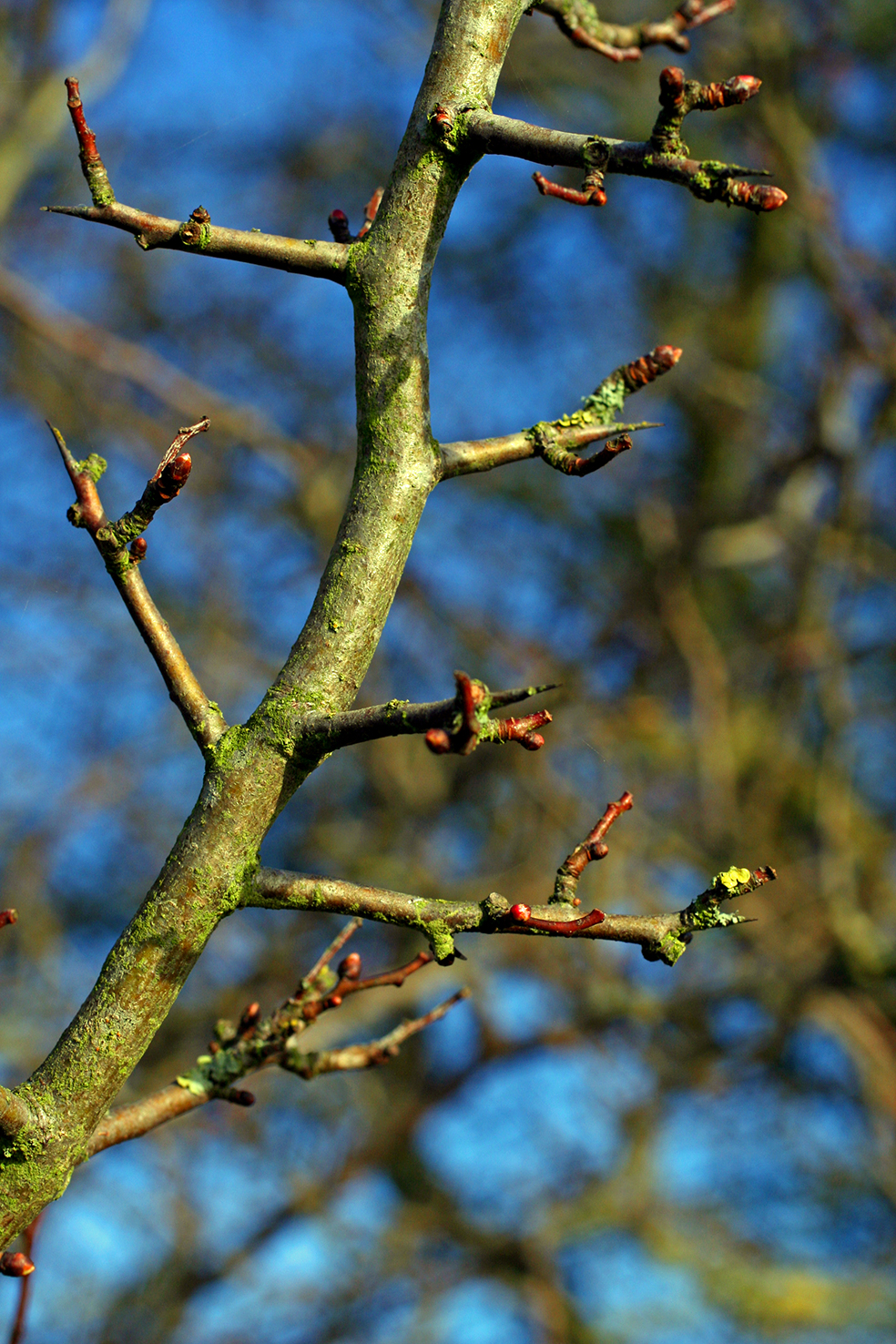 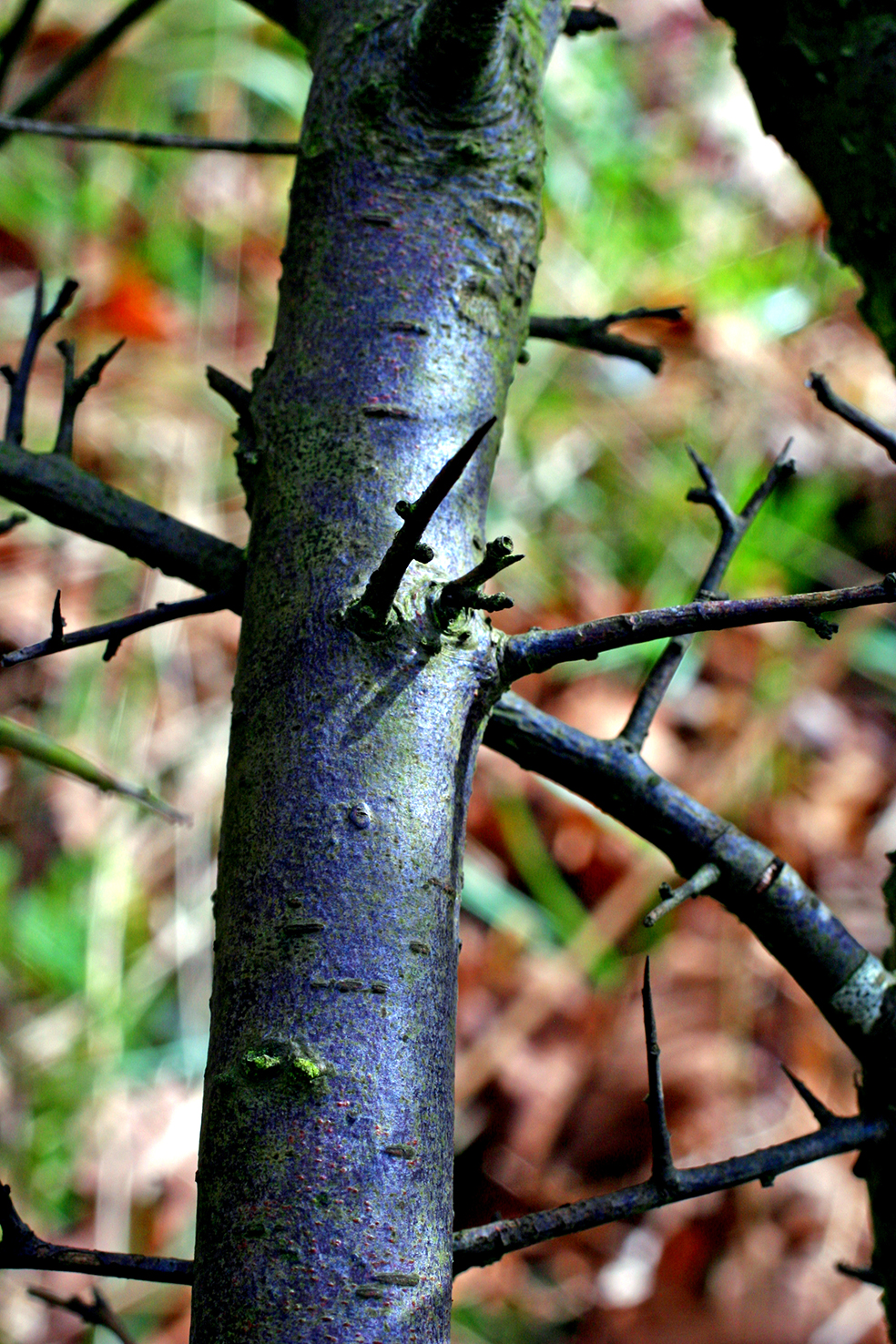 Despite their superficial similarity of bearing five-petalled white flowers in spring, Common Hawthorn and Blackthorn are actually quite easy to tell apart, even in winter. The bark of Common Hawthorn is brown and individual thorns are usually less than 2.5 cm long and free of any buds (photo 3) whereas Blackthorn bark, true to its name, is very dark and individual thorns are much longer and often have buds along their length (photo 4). 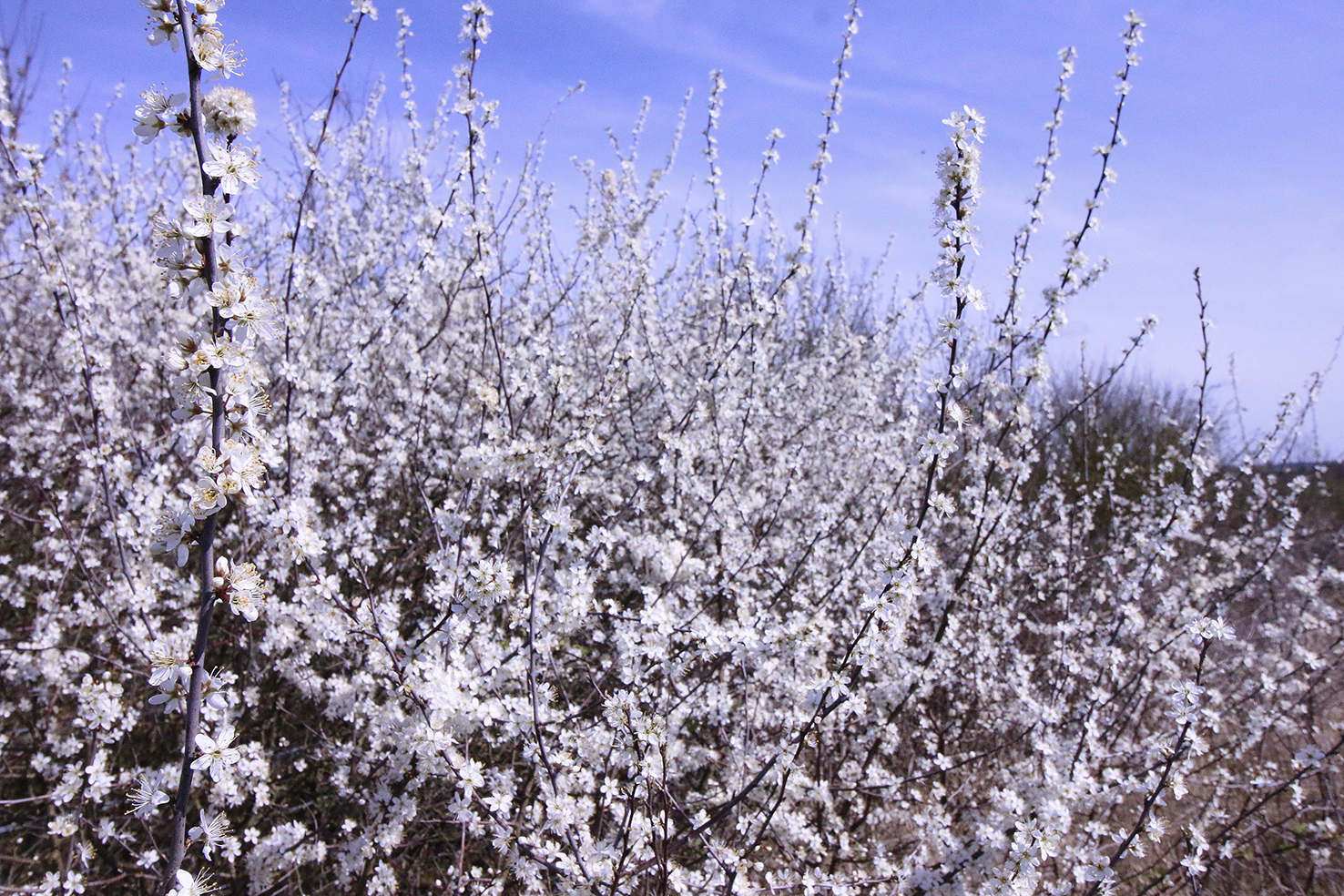 Blackthorn is one of the first trees to come into flower in spring, and, in marked contrast to Common Hawthorn which flowers after it has come into leaf, Blackthorn flowers are produced long before its leaf buds start to burst, producing an almost snow-like effect which contrasts beautifully with the black bark (photo 5). Blackthorn petals are narrower and with little or no overlap (photo 6), in contrast to the more rounded and overlapping petals of Common Hawthorn (photo 1). 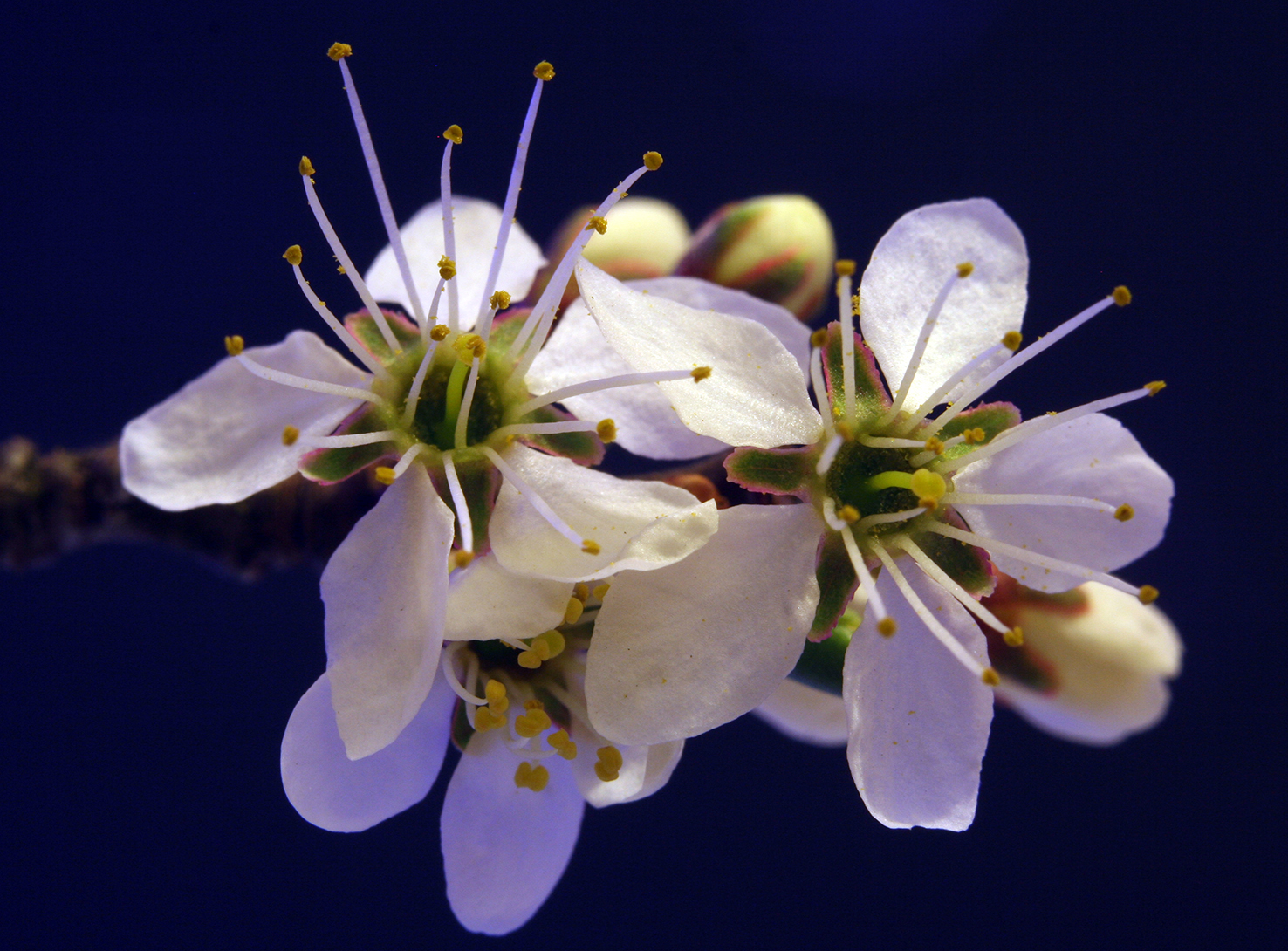 Blackthorn and Common Hawthorn flowers can only be seen at the same time for a short period, usually towards the end of April, when Blackthorn is coming to the end of its flowering period and Common Hawthorn is just starting, ready to do justice to its other commonly used name of ‘May-tree’. At this stage identification becomes easy, as the leaves are start-ing to unfold. Blackthorn has oval leaves with serrated edges (photo 7) whereas Common Hawthorn has lobed leaves of a very distinctive shape (photo 8). 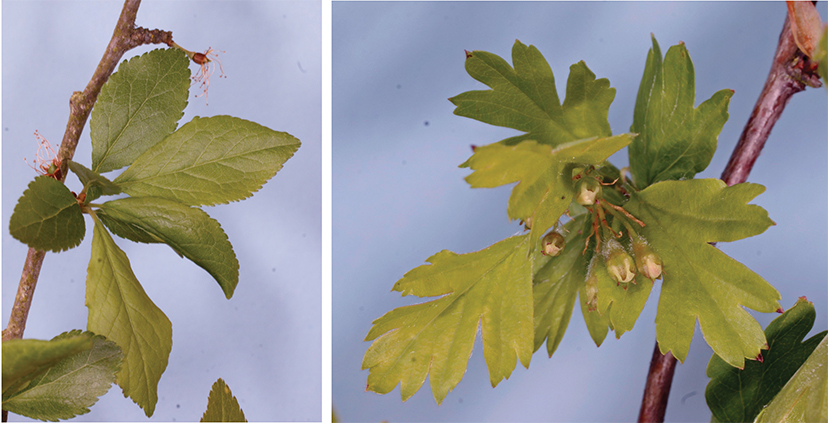 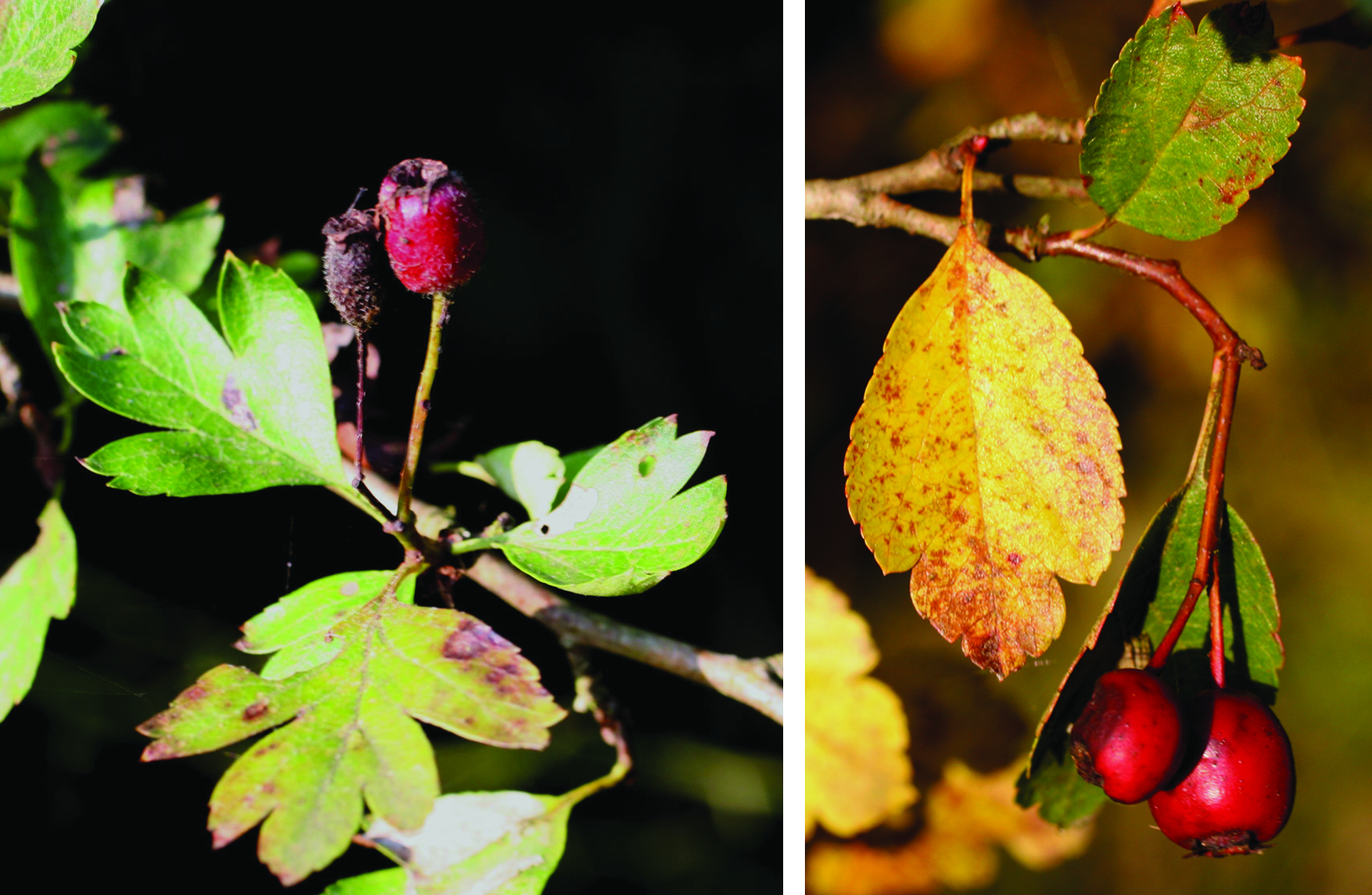 Common Hawthorn leaves cannot really be confused with those of any other native tree, except its close relative the Midland Hawthorn (Crataegus laevigata) whose leaves are less deeply lobed. Another less obvious but indicative difference between the two species requires internal examination of the small fruit which, although berry-like in appearance, are apple-like in structure (the hawthorns belong to the apple subfamily of the Rosaceae). Common Hawthorn has only one seed per fruit (photo 9) whereas Midland Hawthorn has two (photo 10). Although less widespread than Common Hawthorn, Midland Hawthorn is by no means restricted to the Midlands and has been recorded on Gower. Hybrids between the two hawthorn species are not uncommon, the identification of which can be a challenge.

Blackthorn, too, has been known to hybridise, in this case with other members of the plum subfamily. Most notably, it is thought that all our cultivated plums (Prunus x domestica) – several types of which such as the bullace (photo 11) now grow wild around Britain – originated with hybrids of Blackthorn and Cherry Plum (Prunus cerasifera) (photo 12). The latter is another very early flowering species that is sometimes confused with Blackthorn due to its similar flowers (photo 13). Cherry Plum, however, only has very few thorns. Later in the year distinguishing between the two species becomes easier, as the Blackthorn fruit (also known as sloes) mature into miniature purple plum lookalikes while Cherry Plum fruit turn various shades of yellow and red (photos 14 and 15). 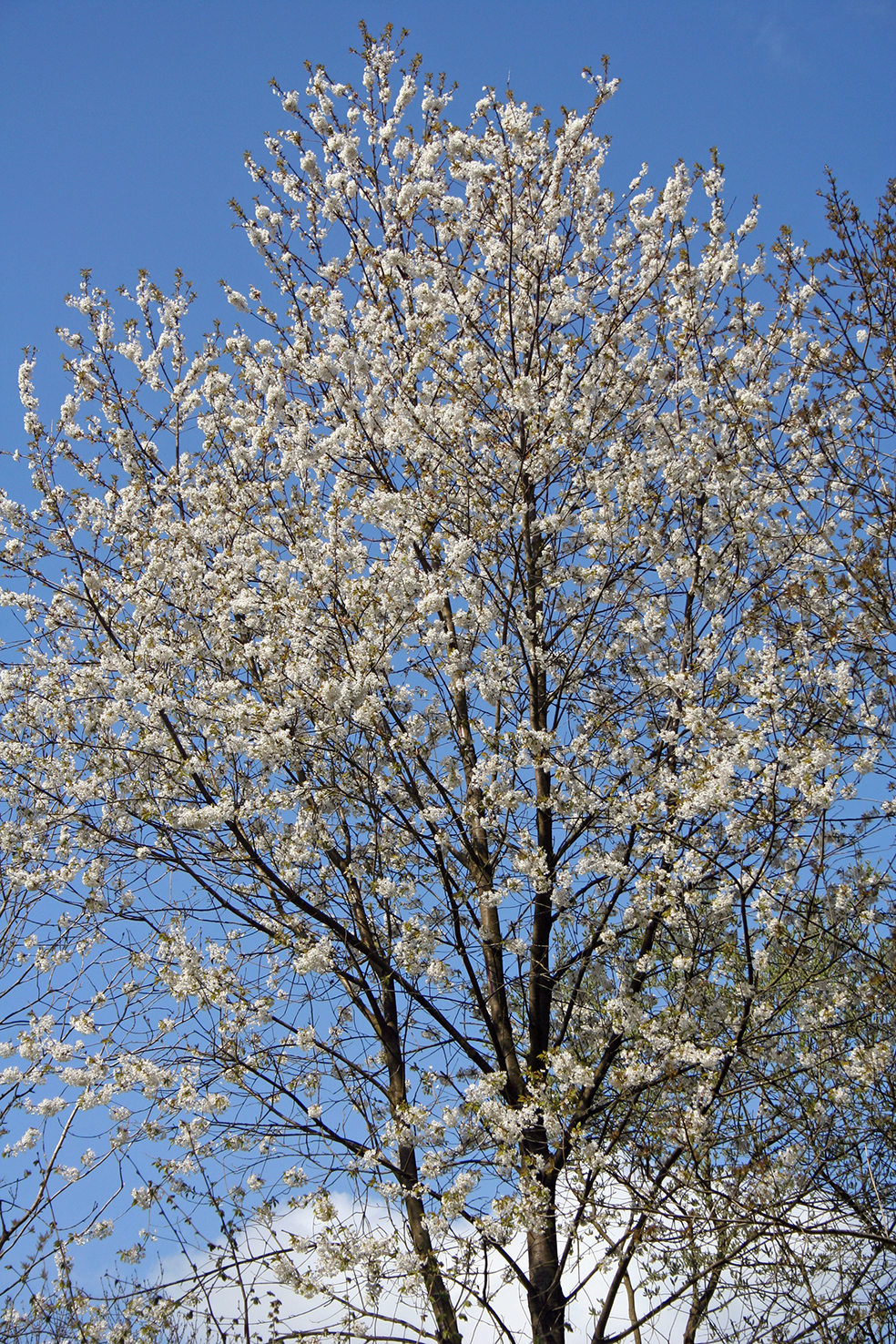 Despite their name, Cherry Plums were not involved in the development of our cultivated cherries. These were derived from the Wild Cherry (Prunus avium) (photo 16). Wild Cherry is a comparatively tall tree which can reach a height of around 25 metres. Its young bark is distinctive, possessing horizontal lines of 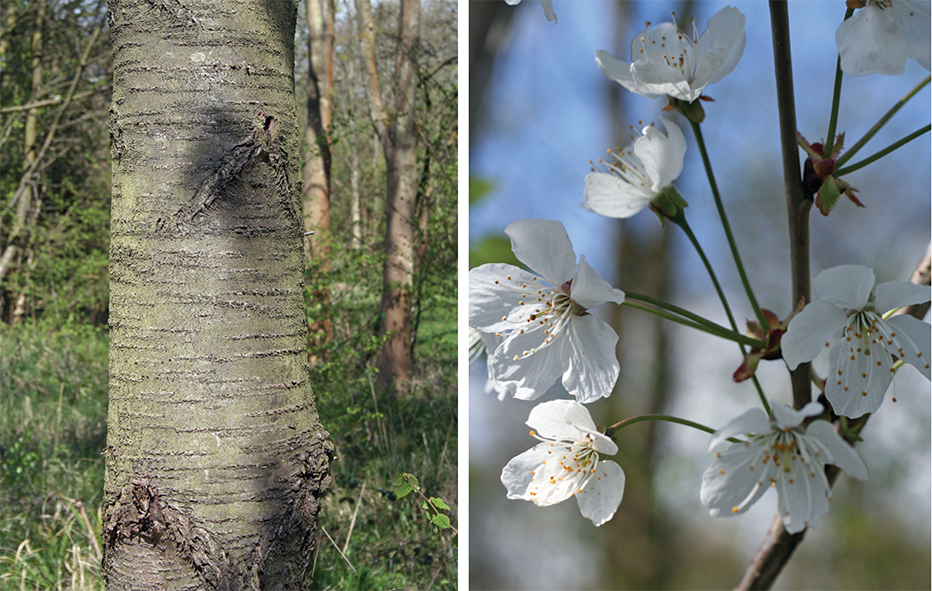 so-called lenticels, which are breathing pores (photo 17). Its flowers are similar to those of Cherry Plum but they are held in clusters of 2-6 on conspicuously long stems (photo 18), and have a delicate almond-like scent. While Wild Cherry fruit is usually only of interest to wildlife, the wood is highly prized for woodturning, building musical instruments and crafting exclusive furniture. Wild Cherry rootstocks are frequently used for grafting cultivated varieties onto. 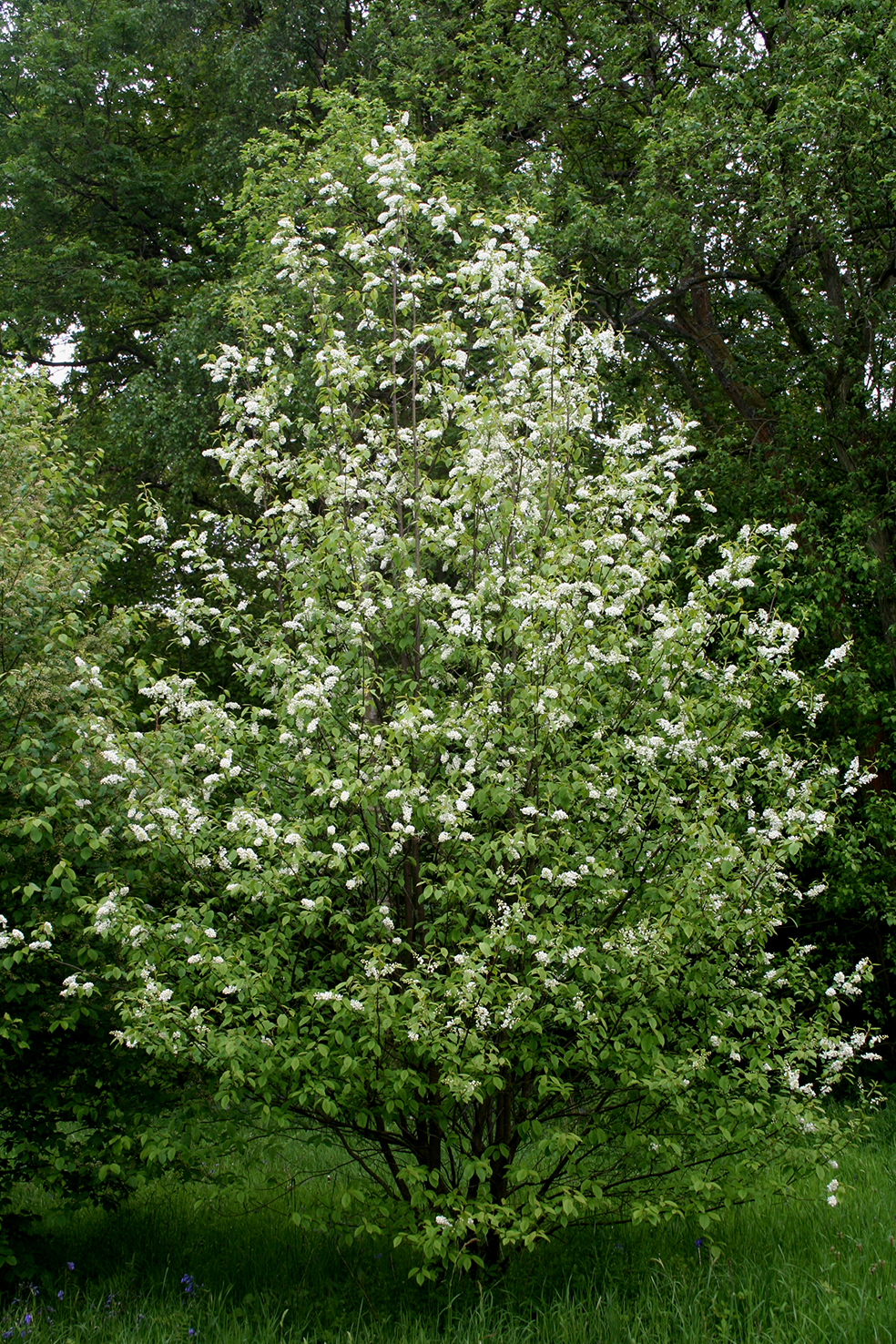 The only other native cherry, the Bird Cherry (Prunus padus) (photo 19) is a smaller tree than the Wild Cherry. Its bark lacks the Wild Cherry’s typical bands (photo 20) and both the bark and the wood of Bird Cherry emit an unpleasant odour. During spring and summer Bird Cherry is particularly distinctive due to its beautiful flowers and attractive fruit which are held in neat clusters called racemes (photo 21).

True heralds of spring and early summer, all our native Crataegus and Prunus species play important eco-logical roles throughout the year. In spring they provide sustenance for insects newly emerged from hibernation, throughout the summer they supply foliage for numerous insect species to feed and develop on and – particularly in the case of the thorns – they offer secure nesting places for birds, and later in the year they pro-vide copious crops of fruit, helping a wide range of animals build up their reserves ahead of (and in the case of Crataegus even during) the winter. And on top of all this they never fail to delight us with their cheerful flowers, year after year!