BREAK FOR THE BORDER

If like me you’ve a penchant for the classic car small ads in the monthly motoring glossies you’ll know that classic cars aren’t cheap – and prices are rising too. A few years ago I sold my (albeit well used) Porsche 924 for somewhere around the 2 grand mark: there’s currently one for sale in a Porsche dealership in Bristol, for £29,990! Granted, it’s in better condition than mine ever was, but you get my point. My Mini Cooper definitely would have been worth a few quid if I’d hung on to it, my Hillman Imp too. I’ve even seen an MG Metro – you’ve guessed it, I had one of those as well – for sale at £19,995.

The chances of me ever owning an early ‘70s 911 without the aid of a lottery win, or doing a “bank job” are now probably long gone.

A couple of weeks ago though, I did spend the day in the company of some rather lovely classic cars without having to succumb to their related costs. Thanks to Great Escape Classic Car Hire, over the course of a day I drove a glorious V12 Jaguar E-Type, a very burbly Jensen Interceptor, a somewhat Bodie and Doyle V6 Ford Capri 280, and a recreation of the aforementioned Mini Cooper. I had a blast.

From their workshops on the appropriately named Dunlop Road in Redditch, Worcestershire, Great Escape Cars run a fleet of classic cars; many of which you may recognise if you’ve ever seen the BBC’s Antiques Road Trip. I got up early to join them on their Break for the Border Tour. 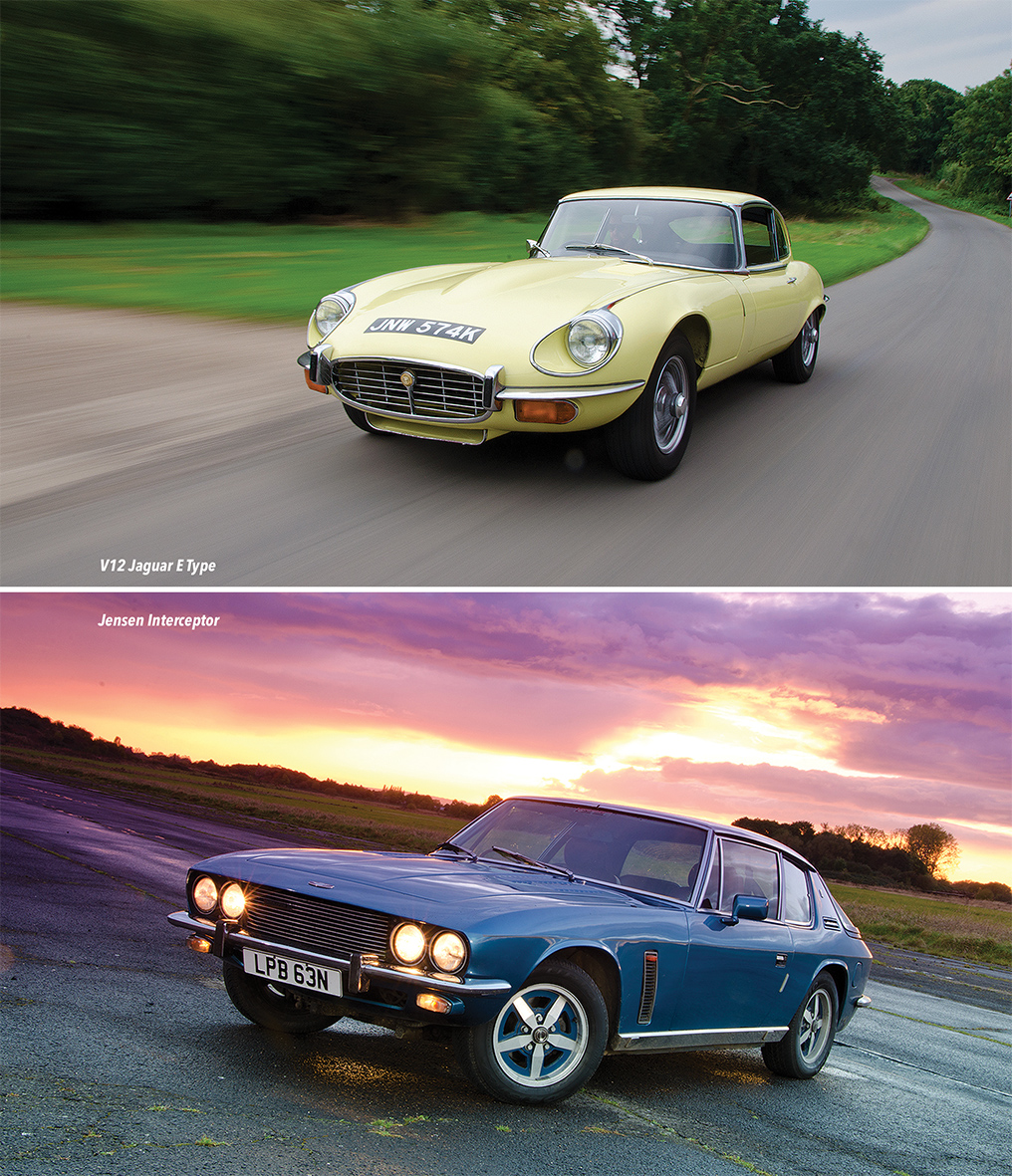 Their format for the day’s driving was simple. Gather together a group of like-minded petrol-headed people – that’s not a necessary require-ment I hasten to add, all are welcome, – give them breakfast and a chance to have a natter, get them to select a set of keys to one of the classics that Great Escape Cars have fuelled for the day from a Morris Minor hubcap (what else?), and then let them loose on the roads of Worcestershire, Hereford-shire, Powys and Shropshire armed with a comprehensive route book and lots of enthusiasm. Don’t worry the insurance is taken care of and there’s a back up team of mechanics on hand should anything go wrong.

In some instances the Great Escape team even follow behind with an extra classic car that you can swap should the worst happen. It’s all very well organised.

First up we got the E-Type. What a way to start the day! Malcolm Sayer’s timeless masterpiece; the car Enzo Ferrari called the most beautiful in the world. With 5.3 litres of V12, the long louvered bonnet, a four-speed ‘box, rear-wheel drive, and no anti-lock brakes! Driving a classic takes concentration.

The views though were superb. As Worcestershire turned into Herefordshire we got used to the torquey long-legged nature of the E-type, warmed our legs on its gearbox, and got to grips with the route book. Speeds increased as traffic lessened and we got a glimpse of what owning an E-type might actually be like: Effortless performance and admiring glances. Just image the impact this car had in the sixties.

Next up, the 1970s. We chose to go in chronological order. If the E-type took the world by storm in 1961, the Jensen Interceptor – surely that’s one of the greatest names ever to adorn a bootlid – must have felt like a space-ship in comparison. Air-conditioned and with a 3-speed Torqueflight auto-matic gearbox paired with a 7.2 litre Chevy V8, this leather-clad Anglo-American luxo-barge actually handles far better than you might imagine. It feels modern when you slide in behind its thin-rimmed wheel after a stint in the Jag. Again the performance is effortless, but it’s very much a grand tourer rather than an out-and-out sports car. It’s a seven-ties super-yacht for the road – with similar fuel-consumption and an equally soft-going ride.

Herefordshire turns into Powys as you cross the Welsh Border on the A44. These are familiar roads to me so a glance at the route book was all we needed. We set course for Pen-y-Bont.

By the time we’d wafted into Wales, lunch was beginning to sound like a good idea. It was also a chance to swap stories from the morning over a cuppa and chip or three and compare notes with the others. How did you find the Jag? Was the Jensen anything like you were expecting? Aren’t these roads good? Did you get lost in Kington too? What’s for pudding? And, what’s the Capri like?

It wasn’t just us asking. The Capri might have fallen from favour soon after its early 80s poodle-permed hey-day but these days, judging by the number of people who commented on it as we enjoyed another Welsh cake (oh go on then), there’s still a lot of affection for “The car you always promised yourself”. Well, that’s what Ford once said about it anyway.

Like all of Great Escape Cars “our” Capri 280 was both well used and well loved; Patina I think those in the classic car know call it. With its leaf springs and live-axle rear suspension, plus a limited slip-diff and of course Ford’s lusty Cologne V6 engine, the Capri bridges the gap between the old and the new, it really is a modern classic. Ensconced in its Recaro seats, the whole Capri experience feels all-too familiar for a forty-something boy like me. 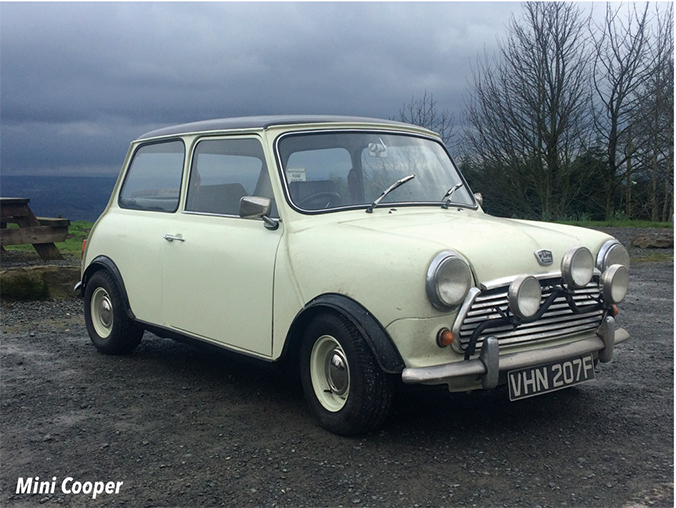 Not as familiar as the Mini though. Nothing puts a smile on your face like one of those. Especially so in my case when I realised that after our swap-over just outside Newtown the route was to take us over the Shropshire Hills down The Clun Valley and on towards Ludlow – and right past my own front door. Talk about winding back the years. With the Great Escape ring binder on my knee, as the Mini bounced its way back over the border at Bishop’s Castle, I felt like a six-former again as we passed my old school’s gates. Perhaps I should’ve paid more attention while I was there, instead of reading all those car magazines…

A quick stop atop the Clee Hill to admire the view of the Malverns put us back into the Jensen for the late after-noon cruise back in to Redditch. More miles, little traffic and a superb engine note to go with it. What a Great Escape from the usual daily grind the Break for the Border Tour turned out to be.

Many thanks to all at Great Escape Cars – www.greatescapecars.co.uk Tel: 01527 893733 Twitter: @classiccarshir