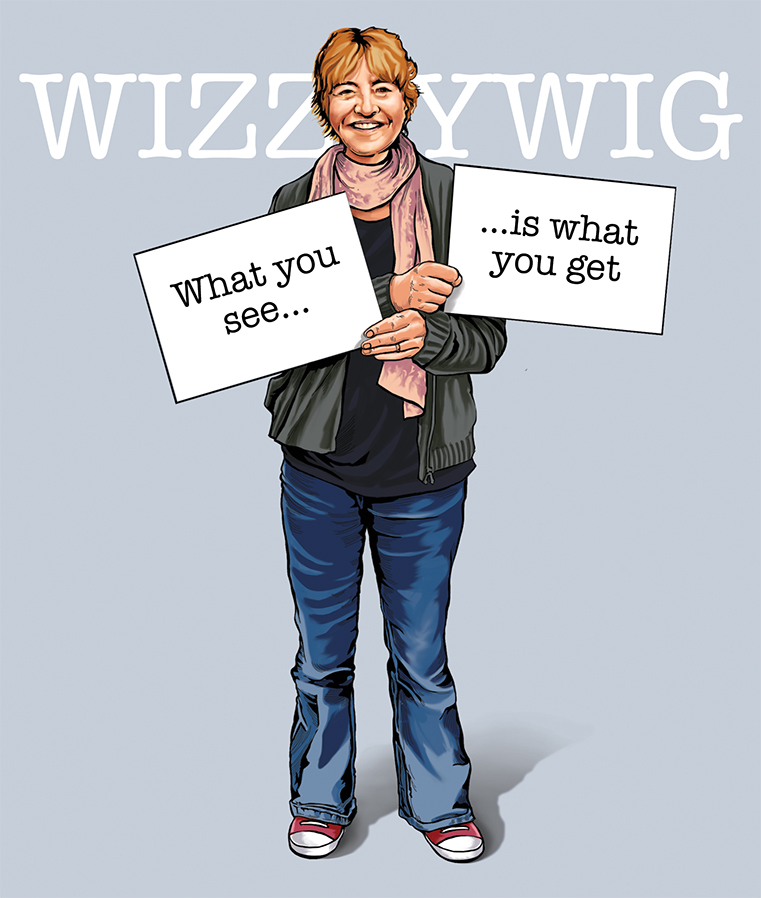 LIZ HINDS IS AN EXPERIENCED AUTHOR IN BOTH CHRISTIAN AND SECULAR PUBLICATIONS. THIS MONTH LIZ LOOKS AT HOW OUR OUTWARD APPEARANCE OFTEN HIDES SOMETHING MUCH DEEPER

If someone asked me to describe Prince Harry (not that anyone’s likely to) I’d say a fun-loving, energetic, enthusiastic young man, which is how he appears. Yet recently he talked openly about his mental health and the depression he’d suffered.

If you passed me in the street and happened to give me a second glance you’d see a late middle-aged woman, a little crumpled around the edges, well past her best – which if I recall correctly happened one sunny summer’s afternoon in 1972. It’s a shame you missed it.

Hair colour by Elvive, body shape by too much chocolate and cheese, eye bags by life. Are you getting the picture? I have resigned myself to the fact that no-one is ever going to say, ‘You look too young to be a grandmother.’ On a good day when Imake an effort I would mark myself as 8 out of 10. On society’s scale I’d be lucky to score 2.5 and 2 of those points would be given for trying hard.

Most days, I’m that woman I suddenly spot in a window looking back at me thinking, as I am, ‘Poor thing, she looks tired.’ Then I realise that’s my reflection pitying me and I make an effort to stand a little straighter, walk a little taller and smile a little more.

But in reality I am so much less and so much more, than that weary woman.

I am a wife of nearly thirty-nine years, mother of three amazing children, and grand-mother of six even more amaz-ing grandchildren. Galloper and dog-lover. Wannabe-famous writer. Didn’t-wannabe-but-am women’s group leader. How-did-I-come-to-be speaker in prison. (Notice the link? I don’t happen to life; life happens to me.) Christian.

The hypochondriac who can go through more diseases in a day than most people could spell. The chronic worrier who in answer to the ‘what if …’ question can come up with eventualities that aren’t even physically possible, let alone likely. The terminally insecure, unsure of my place in the queue let alone the world. The regular visitor to the pit of despondency. The one who relies on a little white pill to get through the day.

Mother’s little helper (for those of you old enough to remember the song from The Rolling Stones) keeps most of that under control. Mostly. Except for the insecurity. And occasional visits from the black dog.

But take away the labels and I’m just me.

Sometimes when I’ve had a particularly trying day and I give vent to my frustration, my husband won’t be able to resist saying, ‘Call yourself a Christian?’

And I cringe and beat myself up even though I know he’s teasing.

I’m not a ‘good’ Christian; I’m not really good at anything. I try hard, but mostly I just scrape through. Two thousand years from now, two hundred years from now, there’ll be no-one who remembers me. They won’t make a television series about my life.

Just like my body, my history will have crumbled to dust because my story’s not dramatic or heroic. It’s more mistake than miracle, more flop than flip.

But then I remember that being a Christian isn’t about being perfect, just the opposite in fact. It’s about acknowledging my flaws and wanting to be different. It’s about knowing I can’t do it on my own, that I need Jesus.

Encountering Jesus can be a complete life-changer, a Damascus road experience, but for many of us the journey is about hanging on in there, hoping we’re not a total disaster but not being entirely convinced. No prizes for guessing which group I’m in.

But I do know that without God then there’d be something missing from me, something that wraps itself around the helix of my DNA, something that is as vital to me as the water that I drink.

Most of the time I’m hardly aware of it and yet it’s always there, working for me, never against me, wanting the best for me, regretting when I mess it up but ready to wipe away the tears and pick up the pieces. Again and again.

A love force that can feel as real as the sun on my face or as distant as the North Star. A hope that helps me to see the pinprick of light in the darkness.

When I turn my eyes from in here, to out there, when I truly want to look and see, when I seek, I’m found. Indescribable, inexplicable.

To read more or to contact me visit my blog, liz-and-harvey.blogspot.co.uk, or find me on Facebook, liz.hinds1