Bay is delighted to introduce a new contributor: Emlyn Roberts-Harry is a lifelong film obsessive, based in London, who got his start by watching Star Wars at the impressionable age of six and went on to love more or less anything with spaceships in it. He’s written for several online outlets (whether they wanted him around or not) and is the editor of MyMovies.net, where he gets to watch films for free and call it work. Emlyn kicks off with a review of Alien Covenant, another scary sci-fi film from director Ridley Scott. 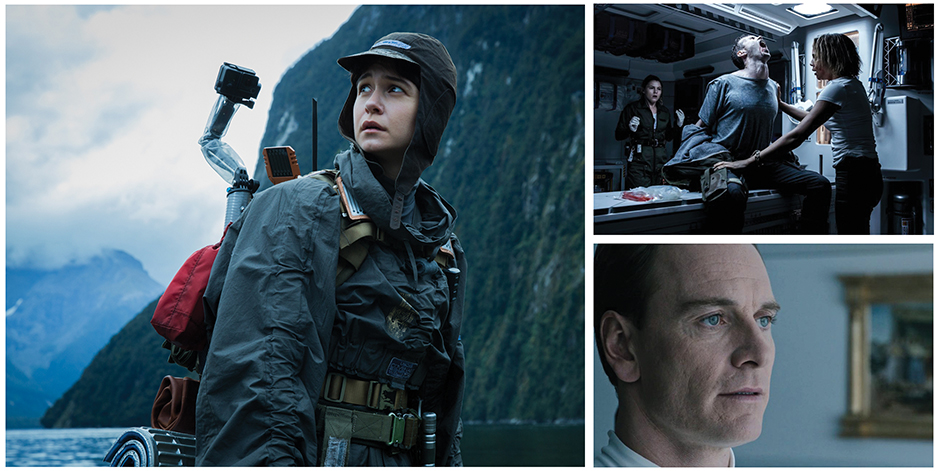 Following up on Prometheus was always going to be a slightly difficult prospect. Ridley Scott’s sort-of prequel to his seminal sci-fi horror classic Alien was beautiful and haunting, but also a little clunky and ultimately proved fairly divisive. It’s certainly not a film that left fans clamouring for a sequel, which is honestly a shame because, flawed though it was, it was the kind of bonkers, big-idea and big-budget science fiction that we don’t see often enough. Alien: Covenant, the sixth entry in the nearly 40-year-old series about space monsters who really want to eat your face, definitely feels like a reaction to its predecessor’s reputation, and is likely to represent a course-correction for those who didn’t care for Prometheus. This is, for better or worse, an Alien movie through and through.

We come in ten years after the events of the previous film, where the deep-space research ship Prometheus disappeared with almost all hands and its last human survivor Elizabeth Shaw went in search of humanity’s creators – bringing rogue, morally dubious (and at least partly responsible for her shipmates’ deaths) android David with her. Now, the colony ship Covenant is undertaking the first large-scale colonisation mission, with more than 2000 souls on board, making its way to a potential new home for humanity. Unfortunately, the planet they land on isn’t the perfect home they hoped for, and a certain iconic sci-fi monster is waiting for them.

It’s a familiar setup, and the film never really manages to break away from that sense of familiarity. Yes, there’s a new variety of alien that bursts out of your back rather than your chest, but you’ve still largely seen this before. Scott’s back in his comfort zone to an extent, and he seems happy to largely give fans what they want – but fortunately it’s executed more than well enough for it to not be too much of an issue.

It’s perfectly paced, giving us plenty of time to get a sense of the character dynamics and absorb the quiet, foreboding weirdness of the world on which they’ve found themselves, before turning into a proper haunted house thrill ride for its second half. The aliens arrive, people start dropping like flies, and it’s enormously exciting and entertaining. It is a shame that the aliens themselves are mostly computer-generated, in addition to frequently being over-lit and too easy to see much of the time, but the feral, albino “neomorph” is still a compelling addition to the bestiary, and the Alien itself is one of the most famous movie monsters for good reason. After all this time, it’s still scary.

This is also a sequel to Prometheus, and fortunately we do get answers to some of the questions that film asked. Covenant does an impressive job of feeling like a new beginning while appeasing those who were curious about where the previous film was heading, and while it’s definitely not Prometheus 2 (something of a pity, admittedly) the plot threads begun there aren’t just abandoned here. It might have been nice to have another film in between the two, and when viewed back-to-back the shift in tone and focus may be a little odd, but this is nonetheless a great example of how to continue expanding the mythology while telling a strong stand-alone tale. Where the franchise goes from here remains an intriguing prospect, not least because it’s still far from clear how these prequels are going to link up with the original Alien.

There are nits to be picked and plot holes to stumble into here, particularly as we enter the race against time of the third act, but they feel largely irrelevant when set against how well Scott achieves what he’s set out to do here. Covenant may not be the equal of this franchise’s first two, pretty much perfect entries, but it’s still worthy of standing alongside them. It’s very much an Alien movie with all that that entails, but it’s also a very good Alien movie that delivers exactly what you want from a film like this: beautiful visuals, creepy atmosphere and terrific monsters. Alien: Covenant may be its franchise’s version of The Force Awakens – going back to what we know works after a perhaps more ambitious but less successful prequel instalment – but it’s executed with true panache worthy of a master director like Scott, and should be the start of a whole new, potentially very exciting iteration of this long-running series.