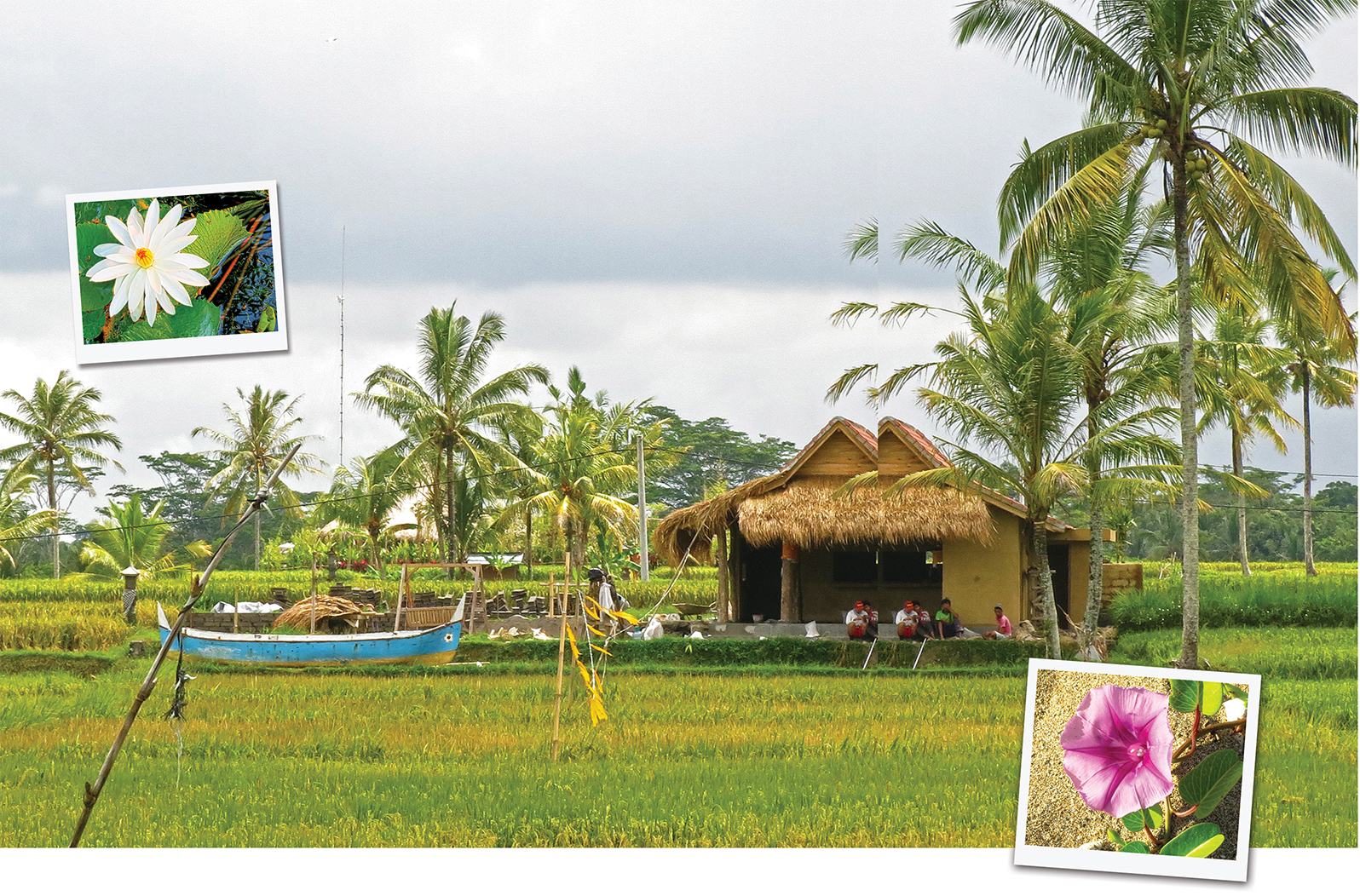 Bali is a province of Indonesia, and being just 8 degrees south of the equator it has a fairly even temperature all year round, making it a popular tourist destination. 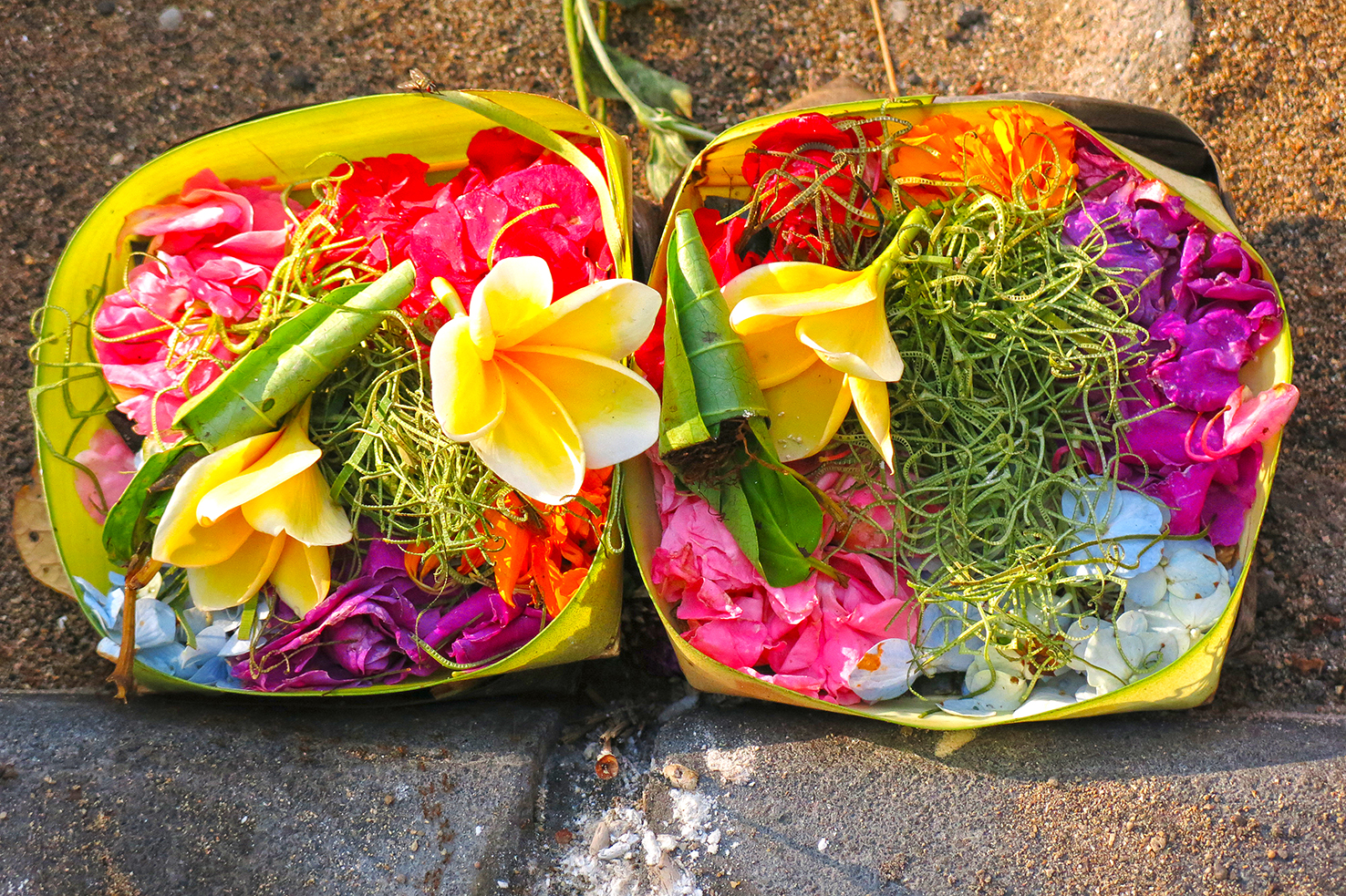 Almost 90% of the population practice Bali Hinduism (a blend of Indian Hinduism, Buddhism and animism), the remaining 10% is made up of Christians, Buddhists and Muslims. Known as the Island of the Gods, it’s a lush, tropical paradise covered by many thousands of temples, statues and shrines. The spiritual essence is forever present. Intricate square-shaped baskets are often to be seen, woven by men and women from palm or coconut leaves called Canang Sari (pic right), and filled with an assortment of colourful flowers, each symbolic, given as a token of thankfulness for what has been given by the Gods. 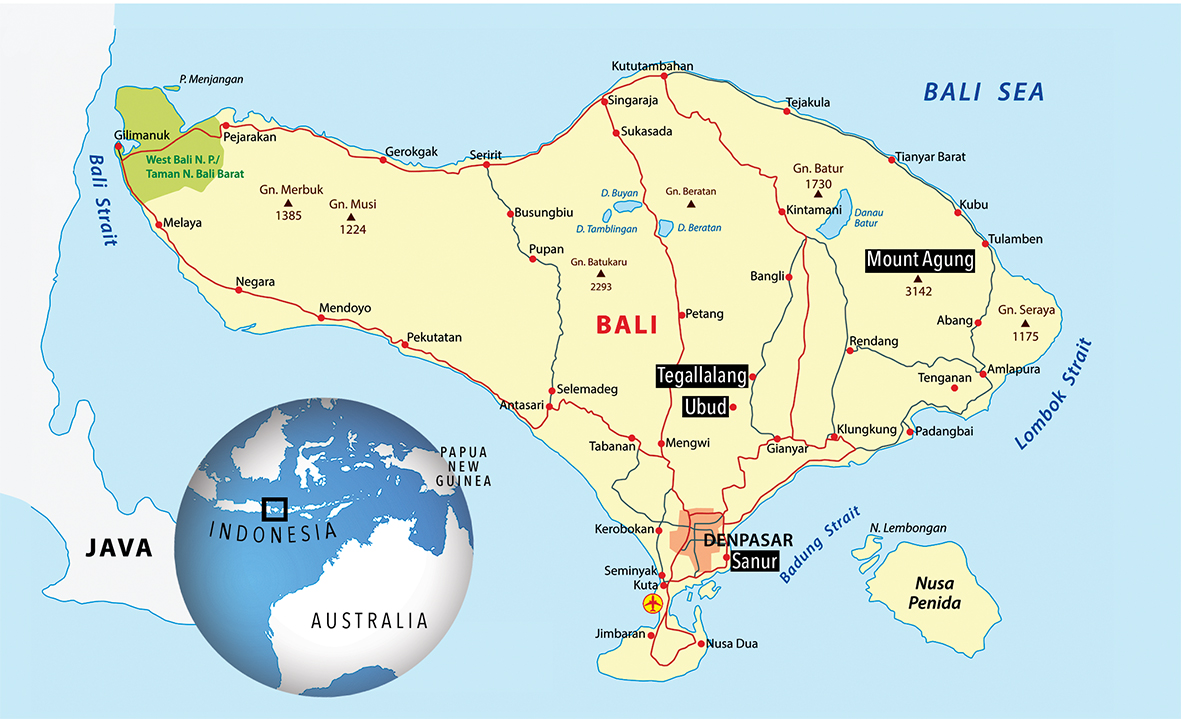 The island is about 100 miles wide and 70 miles from north to south. There are lively resort areas such as Kuta on the western side, a surfer’s paradise, in contrast to Sanur, Bali’s first beach resort where daily life moves at a different pace. A former fishing village situated on the eastern side of the island’s isthmus, it stills retains a quiet charm. It was here that we stayed at the Puri Santrian resort which is family owned and operated, set in landscaped grounds, lush with orchids, the air filled with the sweet scent of the white and yellow frangipani flowers. The freshly dropped blossoms scattered across the paths like fallen stars.

The hotel fronts right onto a golden sandy beach, where the trad-itional fishing boats known as jukung can be seen. They resemble a crowd of brightly coloured praying mantes with their painted hulls, molded eyes and two long wooden poles jutting out to form a barracuda mouth. In the evening, the fishermen put out to sea and hoist the unusual triangular sail returning before sunrise to sell their catch. 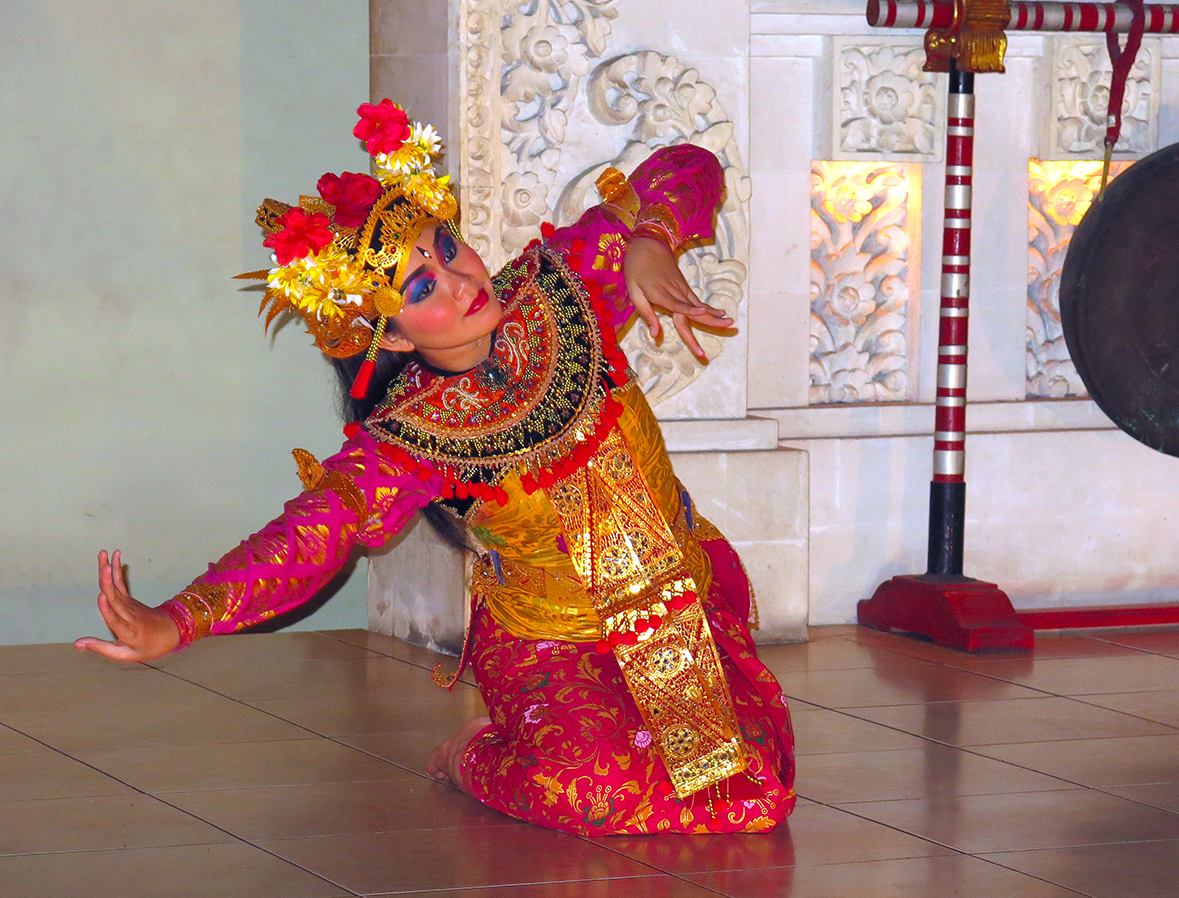 As dusk falls we ventured into the town where in a restaurant, dancers took to the stage accompanied by gamelan musicians. Gamelan is the traditional musical ensemble of Bali and Java, made up mainly of percussion instruments, xylophones and bamboo flutes. The dancers perform Legong, a form of dance characterised by intricate finger movements and footwork, and expressive gestures and facial expressions. Their costumes are brightly coloured and their headdresses exotic – the dancers are trained from a very young age and are incredibly flexible. 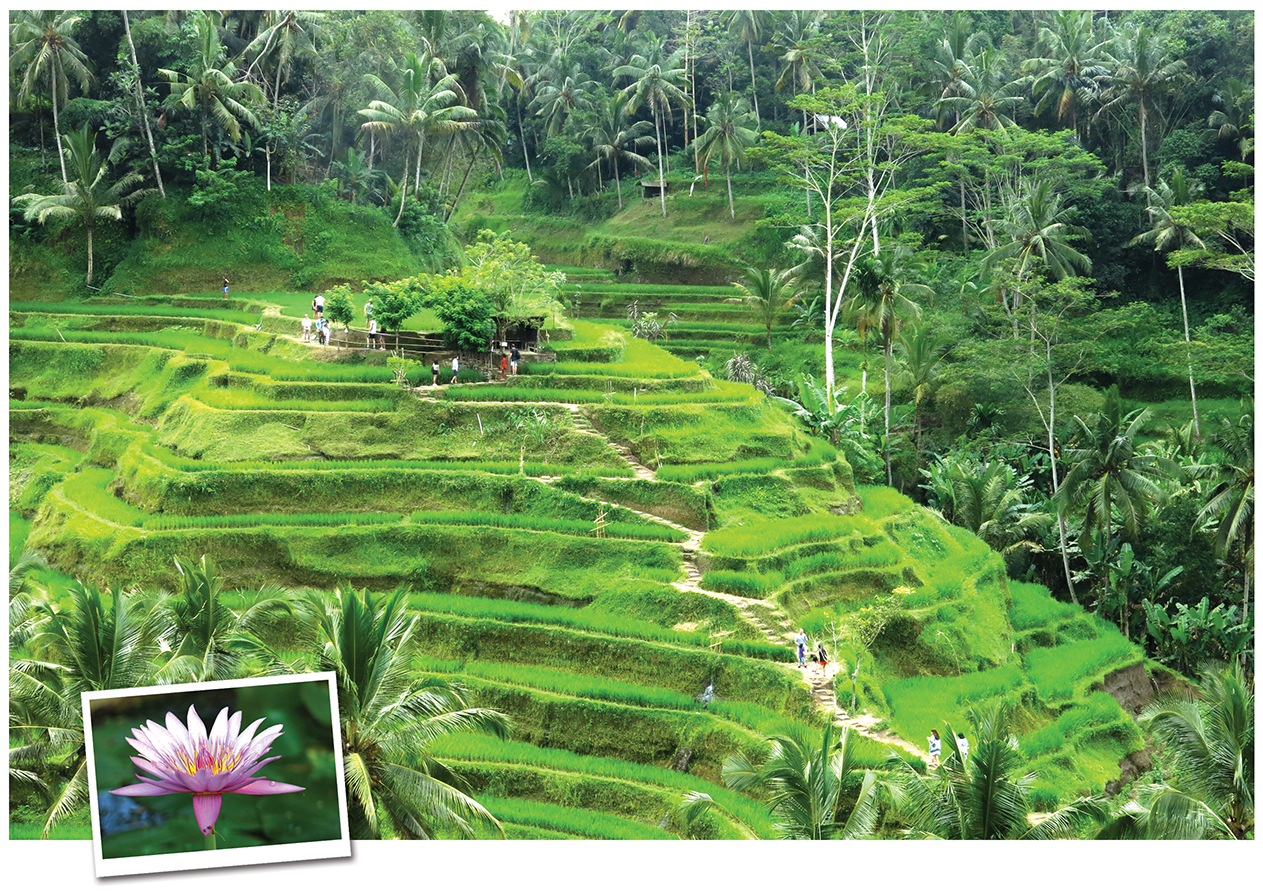 To discover more about the island and traditions we spent a day driving around the beautiful countryside, the tall mountain ranges and even an active volcano, Mount Agung (3,142m). Cultivation of the land has created seemingly endless, finely curved rice terraces. One area which attracts scores of visitors is Tegallalang; for many it is to follow in the footsteps of actress Julia Roberts, as this was one of the locations used in the much–loved film ‘Eat Pray Love’. 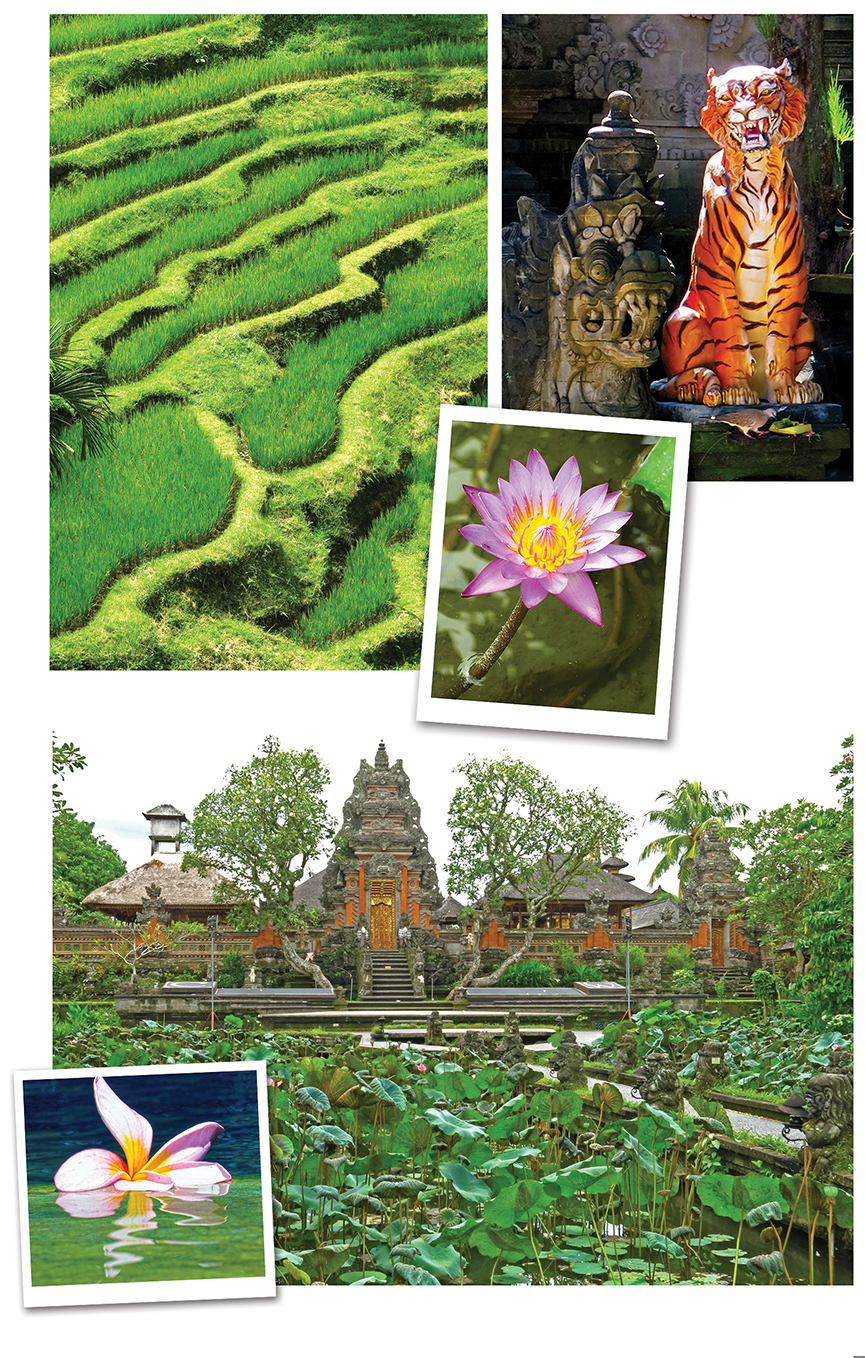 Nearby is the town of Ubud, the heart of Balinese culture and home of one of Bali’s royal families. The compound which houses the majestic palace and temple is open for visitors to explore. Though once a quiet place with eerie temples and moss covered statues, Ubud has changed and can now feel quite over run by tourists, but it still has an underlying charm and pockets of calm and tranquillity can still be found. One such place along the main road Jalan Raya, is the Sarawati Temple, an ornate carved stone build-ing, rising above lotus ponds that are scattered with magnificent pink blossoms the size of dinner plates.

Between Ubud and the southern beach resorts, we found villages where silver and goldsmiths, wood carvers and painters were at work; their wares on sale in small shops and galleries – the perfect souvenir.

Bali is a captivating island awash with myths and legends; it’s lush and tropical and the Balinese people are kind and friendly. It’s the perfect destination for a relaxing holiday.