Oyster Wharf’s latest addition opened last month, making it the 3rd new restaurant in this new Mumbles development. I did have my reservetions that this art-deco inspired rejuvenation of the old Tivoli building would be a bit too high falutin, for dear old Mumbles, but I must admit that it is perfect for Bistrot Pierre. The high ceilings and huge expanse of glass make for an elegant space, and from the first floor balcony, you have uninterrupted views across the bay. This is what Mumbles has been crying out for – a room with a view.

The menu has an Anglo French feel, and I was interested to see that it featured a bavette steak. Also known as the butcher’s secret cut of beef, it’s also known as ‘flap’ steak – you can see why it was renamed can’t you? I often buy this steak as it has the best flavour – but has to be served pink as it will become tough if overcooked.

I booked a table for four on a Tuesday evening, only on arrival did I discover how special the second and fourth Tuesday nights of the month, are at the bistrot. This is when they host their Soiree Gastronomique events; a six course special menu at a fixed price of £22.95. First up was a traditional French onion soup – even my other half who has had a lifelong aversion to onions, all but licked the bowl clean, such was the savoury richness of the broth.

Next came a lightly toasted slice of artisan bread generously topped with plump pink king prawns in Goan butter. I could have cheerfully eaten this all night, but there was more to come.

There is always a choice when it comes to the main course on the gastronomique menu, tonight I was delighted to see it was bavette steak or smoked haddock. There was only one solution – order one of each. Being well behaved, we shared nicely.

So far all the portion sizes had been very generous – and there were two more courses plus coffee to go.

I don’t have a particularly sweet tooth and wouldn’t generally go for a sticky toffee pudding, but this feather light sponge sitting in a little puddle of caramel sauce and topped with a vanilla flecked orb of ice-cream was a dessert lover’s dream.

The cheese course contained a selection of creamy blues and perfectly ripe brie which hit the spot – and was followed swiftly by the sixth and final course of coffee and chocolate.

Not only was the food of an incredibly high standard, and value for money, it was the waiting staff’s attention to detail that sang out to me. Every single member had evidently been trained to an exacting standard – the bar has been set and it’s high – very high – which can only be a good thing for Swansea.

After Sarla’s review of the Favourite Café in last month’s Bay, I had to go down to see the new restaurant for myself. It must be quite daunting to go from a tiny café with very limited covers, to a vast restaurant over three floors. But in true Gigi Gao style, the galleried atrium has been decorated in red and gold, which in Chinese culture symbolises good fortune and joy.

Although the venue may be very different, the food is just the same as we grew to love in Brynymor Road. The traditional Beijing cuisine, devoid of any MSG, is freshly prepared on the premises by Gigi’s very talented chefs. Forget everything that you think you know about Chinese food if your only experience is the British take away version – you will find no gloopy, tooth achingly sweet sauces. Here you will find texture and taste, crunchy vegetables and silky soft noodles.

There were four of us eating on this occasion, so we shared a number of our favourite dishes: spicy pork dumplings, crispy duck and salt and pepper ribs, took the edge off our appetites before we tucked into a whole steamed seabass, chicken with noodles and sweet and sour chicken. The men cleared their plates and called for more dumplings!

I was interested to watch a group of Chinese students sit around a table that had a little barbeque plate in the middle of it. They had various meats, fish and vegetables that they cooked themselves, these were accompanied by noodles and rice. It was a very companionable way to eat together.

New at the Favourite is the 168 Cocktail Bar, so named as 168 is a lucky number! I’m looking forward to discovering some Chinese cocktails. 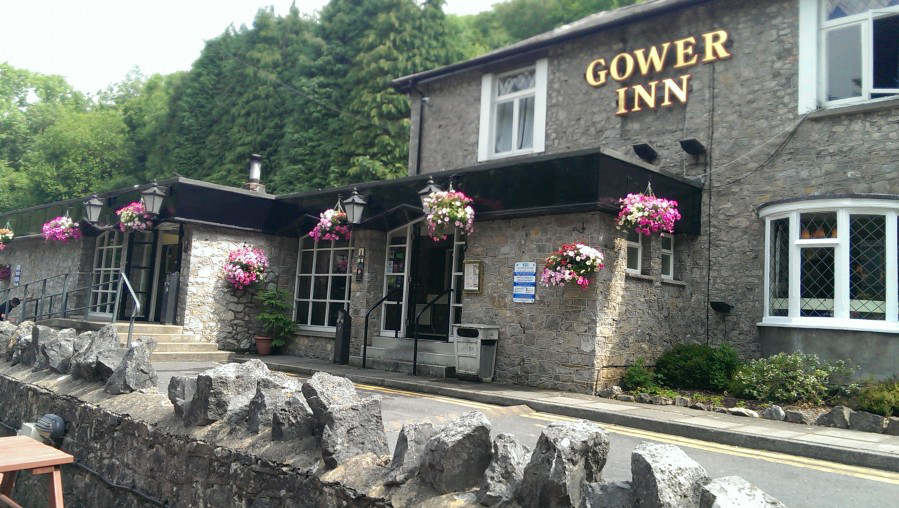 The Gower Inn has been a stopping off place for so many families for generations. It is the perfect watering hole for a pint of something cold and refreshing, after hours spent building sandcastles on the beach, before heading home tired, hot and hungry. In recent times it had rather fallen out of favour, certainly with our family as it too had become tired and hungry for a facelift. Ta da! It’s happened, the Gower Inn has been brought bang up to date with a rather fetching make-over. Gone are the dark wood and dismal furnishings; The Stonegate Pub Company has invested £200,000 in making The Gower Inn a stylish pub. Fabulous pheasant wallpaper, chalk paint finishes and exposed stonework makes for a modern but still comfortable, local. We popped in on the way back from a walk to Three Cliffs Bay and were pleasantly surprised to find that as well as a new décor the menu had been brought into the 21st century too.

As befits a pub so close to the sea, there are lots of fishy dishes; some elegant and sophisticated like the Sea Bream en papillote and some just good and tasty such as the fish finger focaccia. Fish and chip lovers can breathe a sigh of relief as battered cod, the stalwart of the pub menu is present and correct.

I believe that we eat with our eyes as well as our mouths, so the description of a king prawn and crab cottage loaf had me hooked. A miniature crusty cob with its signature top-knot came stuffed to the gunwales with white crab meat and creamy mayonnaise topped with a couple of king prawns. My carnivore partner stuck to his guns and was more than happy with his mixed grill – the philistine.

When looking at a new menu I am always curious to see how well vegetarians are catered for, probably because Liz our photographer often bemoans the fact that she is usually given a choice of vegetarian lasagne or something heavily involving mushrooms – a vegetable she loathes. So I am happy to report to her that she can enjoy an asparagus and pea pasta or green vegetable risotto, should she venture this way.