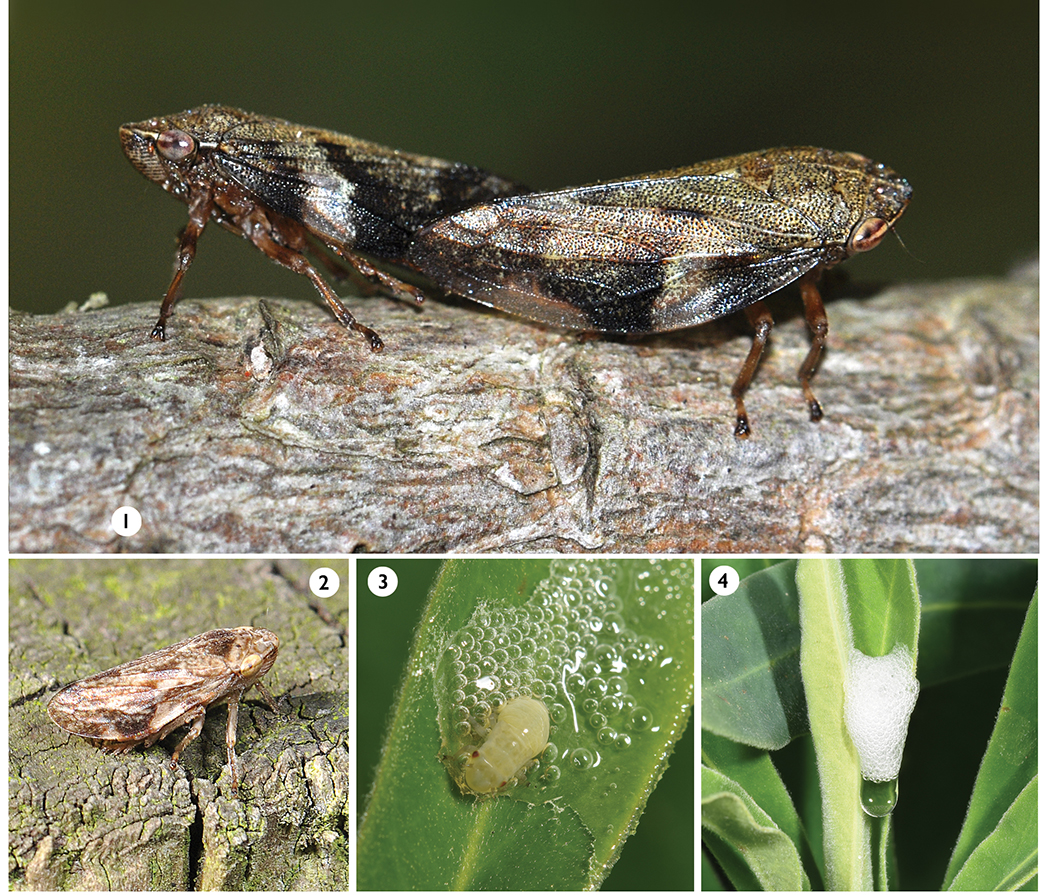 When one is asked to think of a jumping insect, a grasshopper is probably the first that will spring to mind, perhaps followed by a flea. It is unlikely that froghoppers and their relatives are going to feature highly on the list, despite the fact that the jumping abilities of the former pale before the record-breaking feats of the small but mighty hoppers of the suborder Auchenorrhyncha.

Members of the suborder Auchenorrhyncha (from the Greek: neck + beak) are characterised by backward-pointing beak-like mouthparts which arise from the base of the head. These mouthparts are of the piercing-sucking variety, like those of all other true bugs of the order Hemiptera, of which the Auchenorrhyncha are a suborder. Hoppers are generally non-predatory and feed exclusively on plant sap, both as nymphs and as adults.

It is surprising that animals with no very obvious adaptations for jumping should be so much better at it than those in which the tools of their trade are quite obvious. The secret is that the hoppers’ high-tech adaptations are all hidden within their bodies. Very large muscles in their thorax allow them to cock an intricate internal catapult-like mechanism which is able to store energy. This energy can then be suddenly released and transferred to the hind legs when required, allowing the hoppers to achieve a take-off velocity of up to 5.5 metres per second in an incredible one thousandth of a second. This is more than four times the maximum velocity achieved by the much smaller and lighter fleas, which used to be thought of as the most accomplished insect jumpers. Such rapid acceleration puts enormous strain on the body, exposing the animals to forces in excess of 700 g (700 times gravity). The average human loses consciousness at around 5 g. 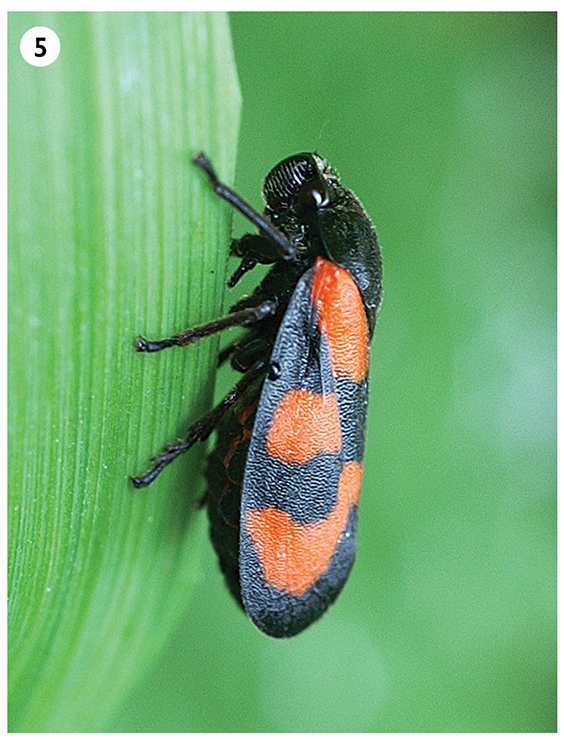 Much of our knowledge of hopper jumping abilities comes from the groundbreaking research of Professor Malcolm Burrows at Cambridge University. Among the first hoppers which were studied in detail were several of the 10 British species of froghopper including the Alder Spittlebug (Aphrophora alni) (photo 1) and the similar-looking but smaller Common Frog-hopper (Philaenus spumarius) (photo 2). Both species feed on a variety of plants and their larvae (photo 3) produce a frothy secretion among which they develop, safe from predators and dehydration (photo 4). This froth is commonly seen on low-growing plants in spring and is often referred to as cuckoo-spit. The large and very distinctive Red-and-black Froghopper (Cercopis vulnerata) (photo 5), whose larvae develop on roots underground, was also studied. Of the three species, the Common Froghopper, which is the smallest and lightest, turned out to be the most accomplished jumper.

It proved capable of propelling itself to a height of 70 cm, a distance equalling 115 times its body length, and it also reached the highest take-off velocity of 4.7 m/s. 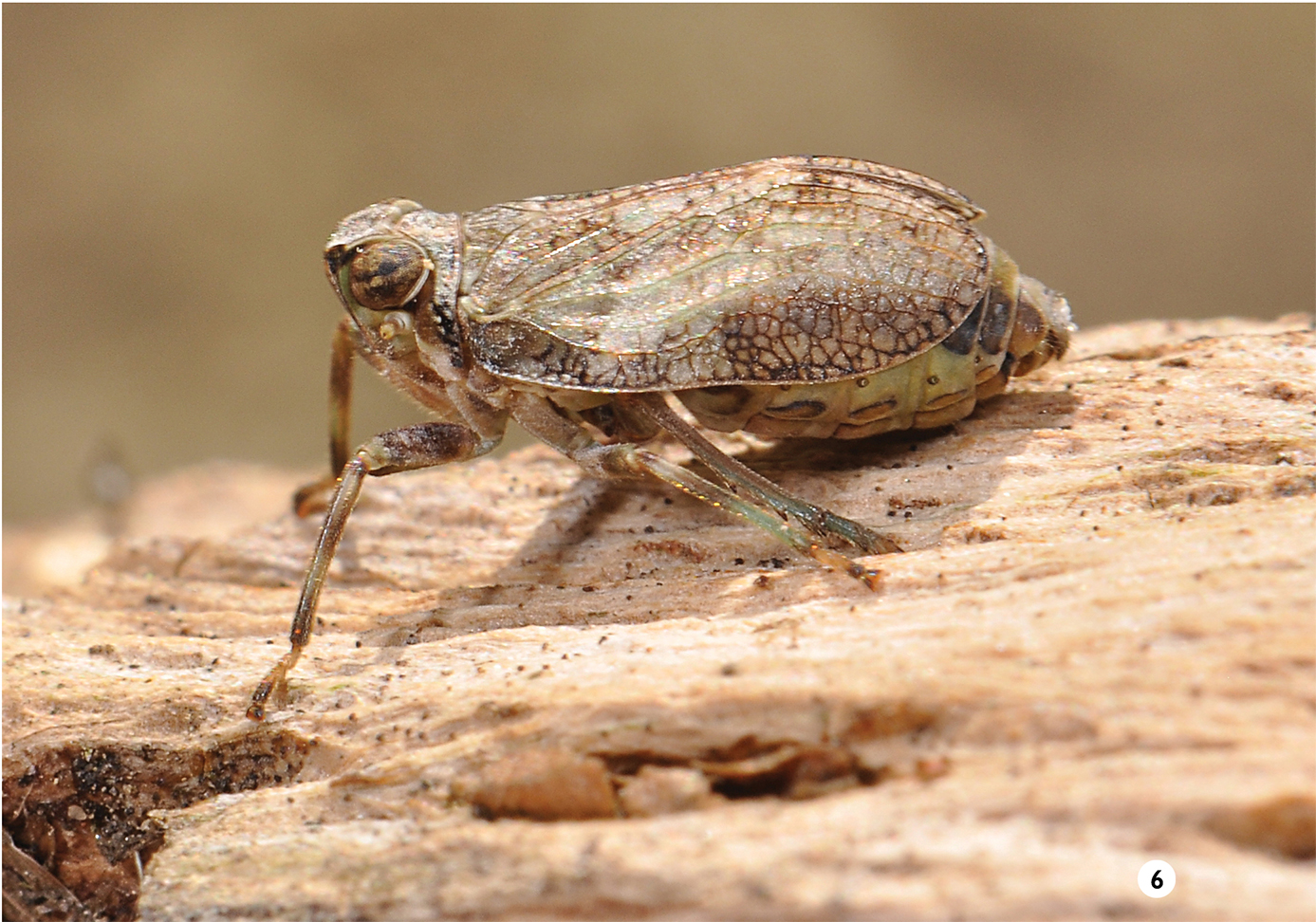 A later study revealed a species capable of breaking some of the froghoppers’ impressive records: males of the issid planthopper Issus coleoptratus (photo 6) can reach take-off velocities of 5.5 m/s at which point they are exposed to 719 g. The rather alien-looking nymphs of this species 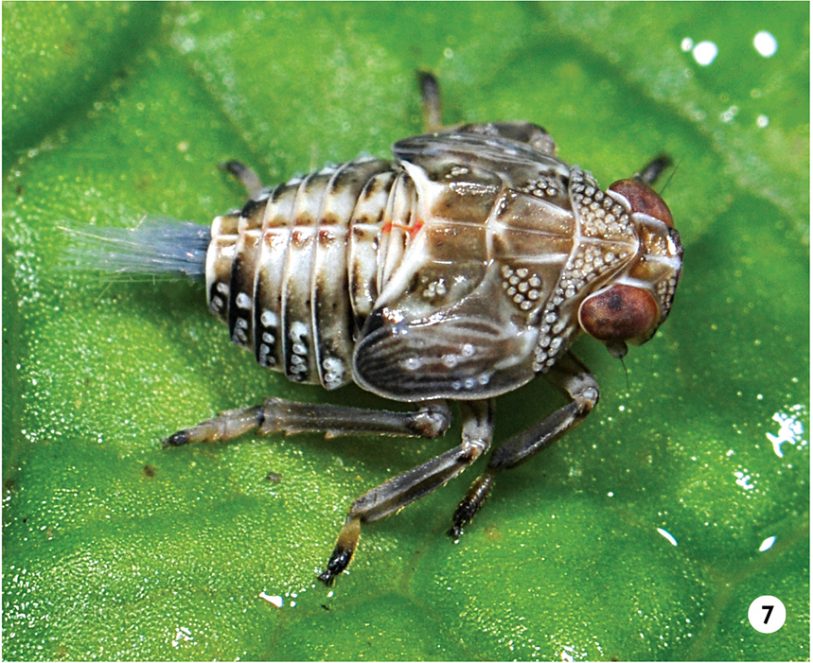 (photo 7) also made the headlines, not for their unusual looks but for a fascinating mechanical gear mechanism on their hind legs which allows them to synchronise the movement of this pair of legs to within 30 millionths of a second of each other, making for a perfectly co-ordinated jump.

Leafhoppers, with 285 species the most species-rich group of hoppers in Britain, are somewhat less powerful jumpers, but they often have well-developed wings and frequently take flight following a jump. Many are well camouflaged and easily over-looked, but on closer inspection often have beautiful colours and patterns. At a body length of up to 10mm one of the biggest and also one of the most distinctively coloured is the Rhododendron Leafhopper (Graphocephala fennahi) (photo 8), which was introduced from the USA in the early 1900s. It feeds primarily on rhododendron and is now widespread across the country.

In most species of leafhoppers, males and females look similar, with an occasional slight size difference between the sexes. The beautiful Cicadella viridis, which is commonly encountered in damp grassland, is an exception in this respect, with the males’ forewings a bluish-purple colour (photo 9) while those of the female are bright green (photo 10).

Some species are unmistakeable not because of their colour but because of their unusual shape. The distinctive head of Eupelix cuspidata (photo 11), which is wonderfully camouflaged in its dry grassland habitat, is quite unique, as are the ear-like projections on the thorax of the Eared Leafhopper (Ledra aurita) (photo 12). 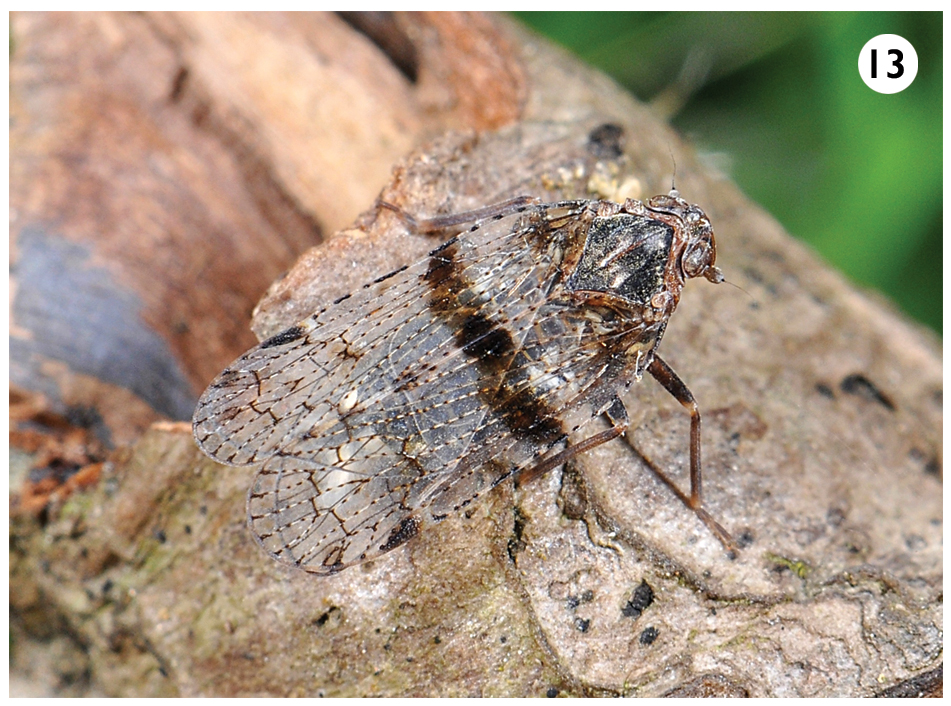 Easily recognized as a group (but difficult to tell apart from each other) are the 12 British species of delicate lacehoppers with their lace-like wings. One of the biggest and most common is Cixius nervosus (photo 13).

The Horned Treehopper (Centrotus cornutus), the larger of the two British treehopper species, has taken camouflage to the next level with the possession of 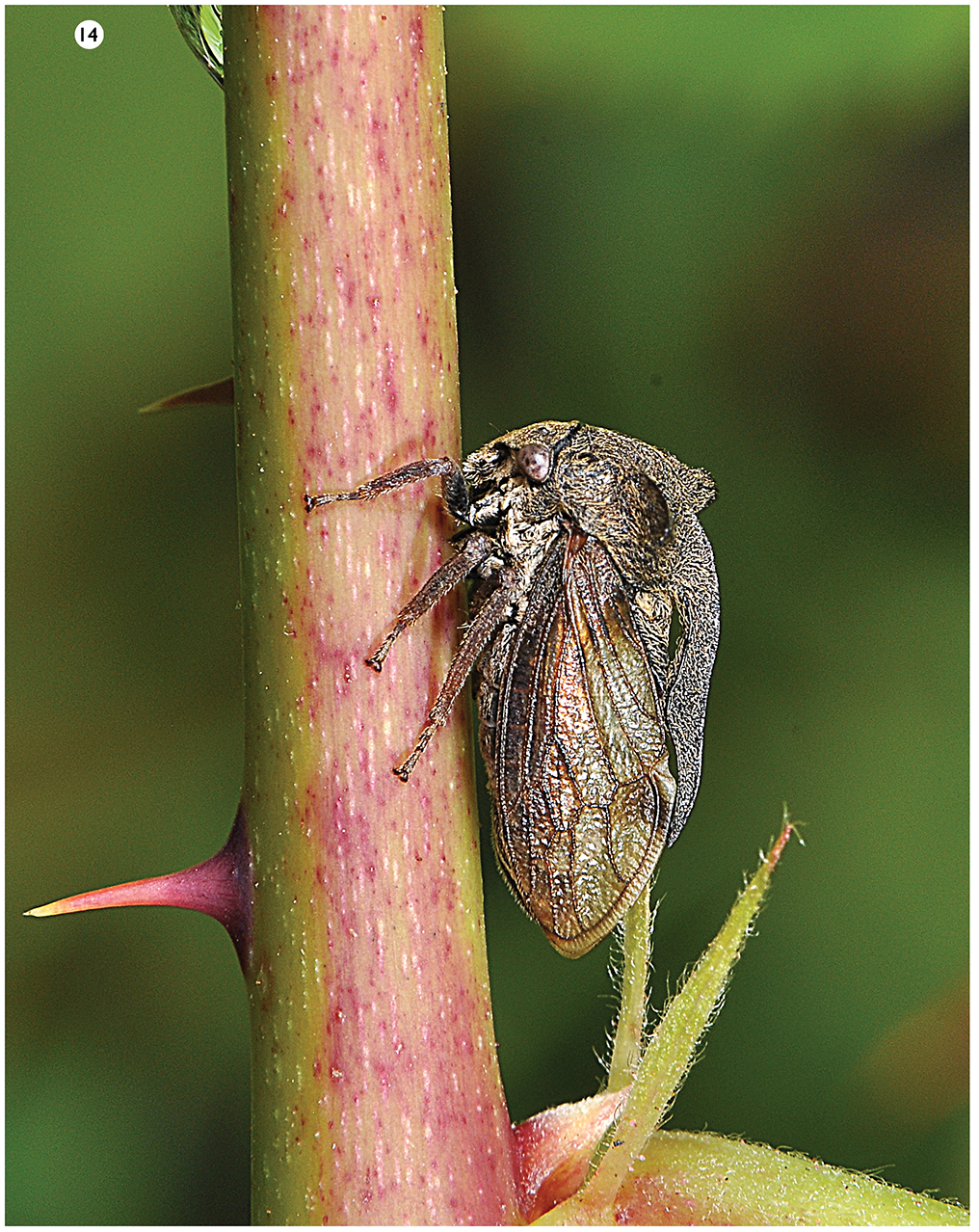 three strange thorn-like structures, the largest one of which projects from the front of its thorax all along its back (photo 14). Depending on the viewing angle, these structures are extremely effective at making it look like either a woody plant part or a pair of sharp thorns, and certainly not like anything worthy of further investigation by a hungry predator.

The 76 British species of planthoppers are generally too small to be of interest to any of the larger predators and do not possess any elaborate camouflage. Instead they rely on their small size, muted colours and unobtrusive habits to keep them safe. The 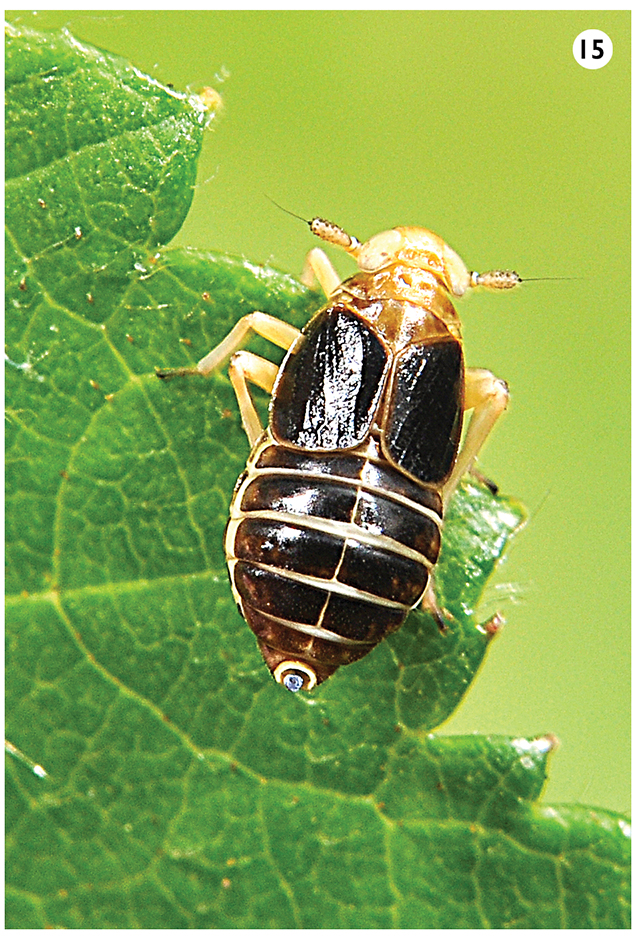 tiny (3-4 mm) Ditropis pteridis (photo 15), for example, feeds exclusively on bracken in woodlands. Ditropis pteridis is one of the many planthopper species which do not develop full-length wings as adults, although, unusually, in several species occasional fully-winged individ-uals do occur. 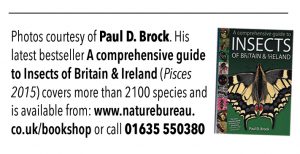 Despite their diminutive size, a few species of planthopper are serious agricultural pests in tropical regions, particularly on rice and sugarcane. Luckily, none of the British hoppers cause any damage to crops or ornamental plants so they can be unreservedly enjoyed, at least until they shoot out of sight at 5 metres per second!