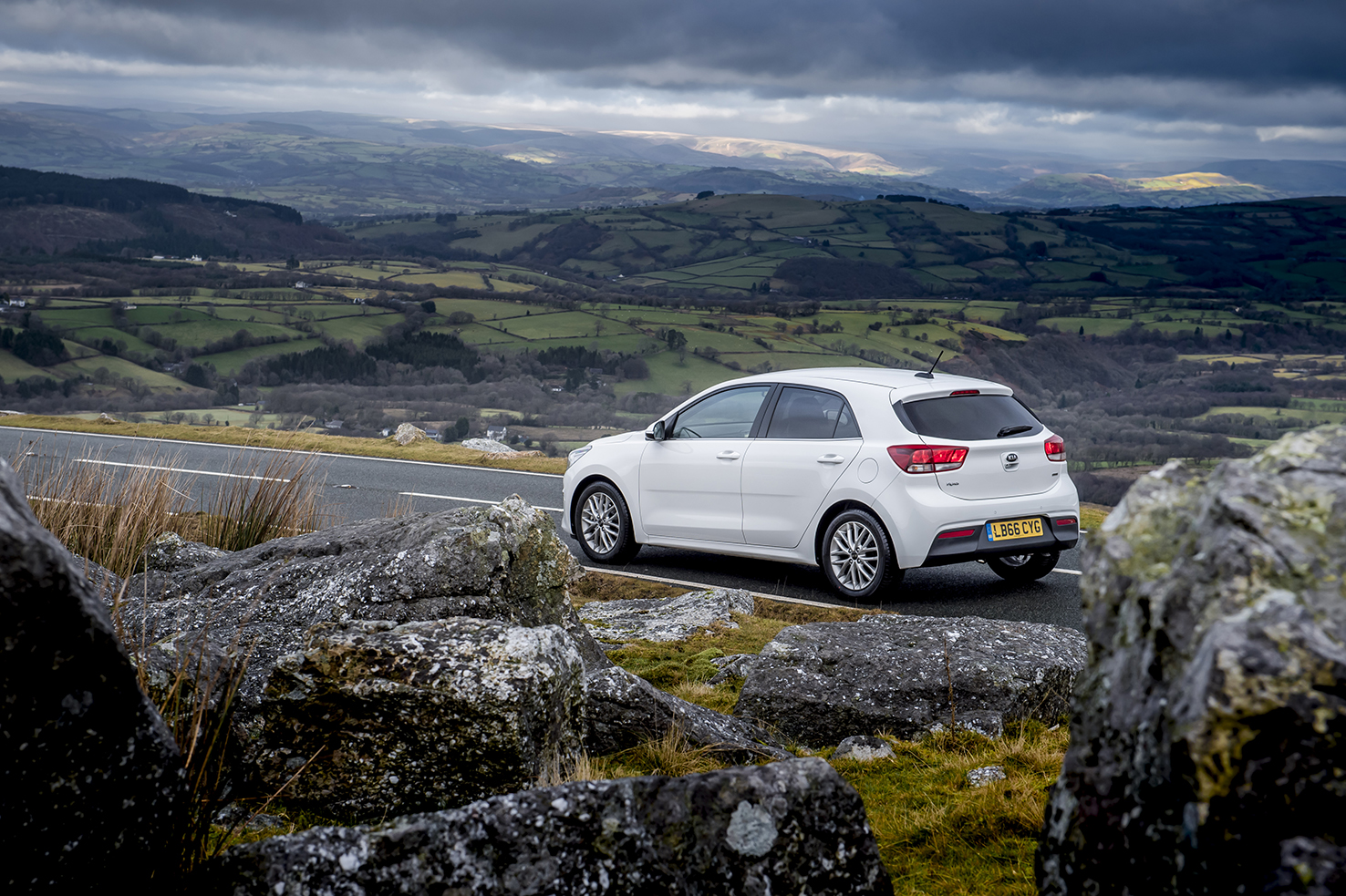 Taking on the big guns of motoring’s super-mini class is not a task to be taken lightly.

Familiar names such as Fiesta, Polo, Corsa, and Fabia, fill the top-ten best-sellers charts, year-on-year and have done for longer than most of us care to mention. It’s not good enough to simply be good in this sector, you’ve got to be really good – and then some.

It’s into this fiercely fought battle-ground that Kia has introduced the latest version of their Rio. Now in its fourth generation the Rio, believe it or not, is globally Kia’s best-selling car with sales close to 475,000 a year. Small cars made in large volumes make for big returns. 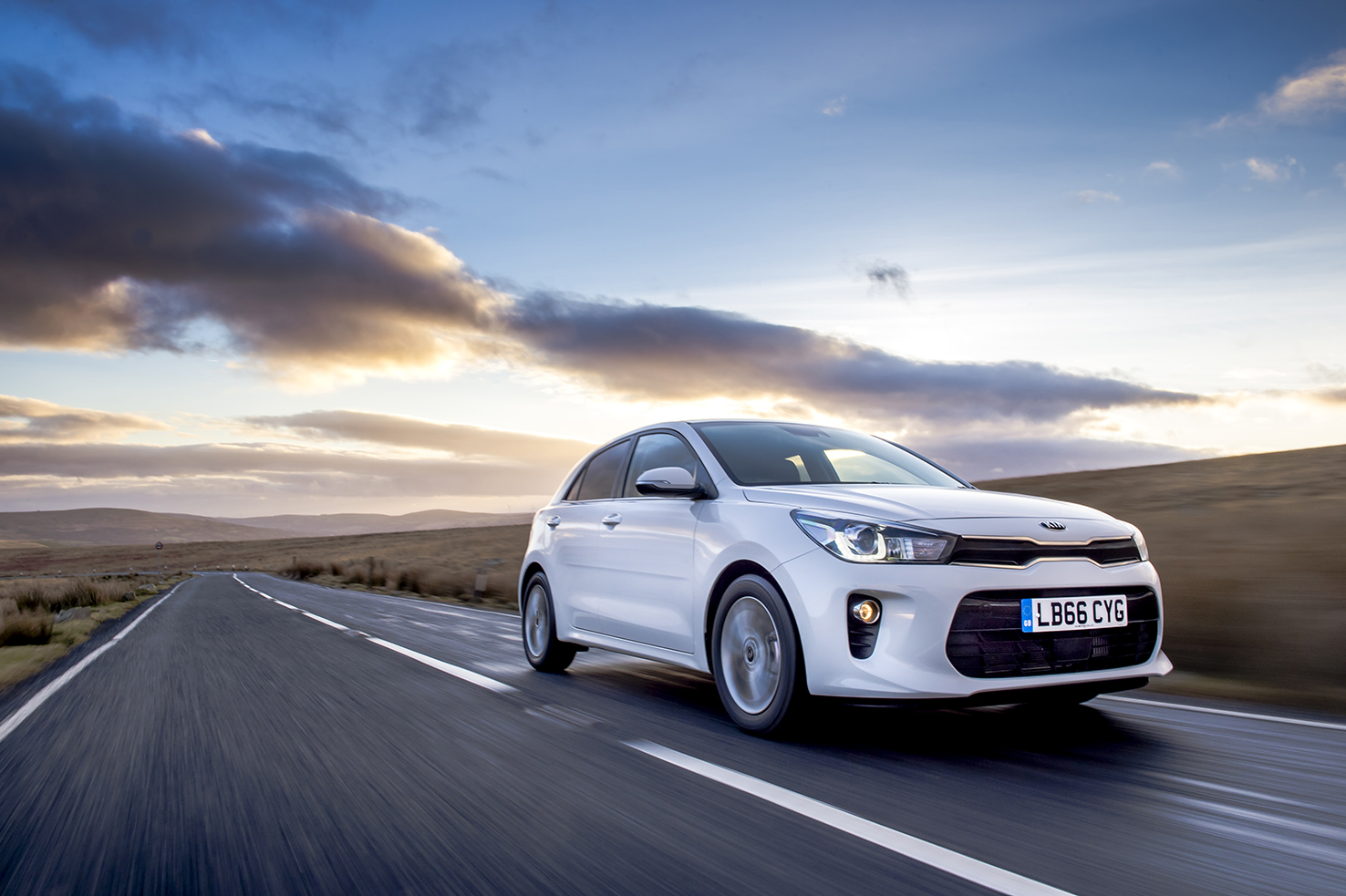 Kia claim the latest Rio is “the small car grown up”, they also say that due to customer demand, it’ll now be available as a five door only.

For 2017 there’s a longer wheelbase, bonnet and front overhang, a lower roofline and a more upright and more compact back end that all add up to make this the largest and most spacious Rio to date. Kia’s trademark “tiger nose” grille has been stretched so it’s now more slender and wider, and highly sculpted halogen bi-function projection headlights with U-shaped LED running lights have also been incorporated. All-in-all, styling-wise, the Rio now feels more mature, if perhaps a tad sober.

Inside things are similarly restrained. The Rio’s interior has been designed around its touchscreens – information available to drivers includes live traffic updates, weather reports, speed camera locations and local point-of-interest searches via Kia Service with Tom-Tom. Whilst leg and shoulder room have been stretched so that they’re now among the best in class. As always with Kia everything is clearly and logically laid out, very well-lit (in either red or white) come nightfall, and the majority of what you touch, and all the major switchgear feels solid, nicely tactile, and built to last. The seats remain comfy after a couple of hours at the wheel too.

Alas though Kia haven’t entirely lost their penchant for hard and scratchy plastics, especially so, lower down in the cabin, and when it comes to lining the boot; things here are disappointingly thin and flimsy. Also, while I’m being really picky, neither do the 60/40 rear seats fold fully flat, which if you’re a load lugger or an Ikea addict could become a real bug-bear.

Standard equipment on the other hand is generous. In familiar Kia style three trim grades are available, creatively badged, wait for it… 1, 2, and 3.

Jump up to Grade 2 and you’ll find 15-inch alloys instead of the 1’s steels, a leather-trimmed steering wheel and gear-knob, electric windows in the rear as well as upfront, electric folding mirrors with LED indicators, DAB, a 5-inch colour display screen, a reversing camera, rear parking sensors, and cruise control with a speed limiter plus Autonomous Emergency Braking and Lane Departure Warning systems which is a first in this class and all part of Kia’s advanced driver assistance systems (ADAS).

We also got the 1.4 89bhp 4 cylinder diesel engine, which although not exactly what you’d call aurally exciting – industrial fits the bill more accurately – did provide adequate day-to-day driving punch (0-62 in 11.6 seconds) and even out in the hills returned close to 56mpg over a week and 388miles. Kia claim their 4-pot oil burner will do 74.3, but that’s probably on the flat, with no wind at all, and with a feather-light driver with an even lighter foot. At least CO2 falls under the 100g/km threshold, and I’m pretty sure that with just 1,600 miles on its clock our engine still had some loosening-up to do. I hasten to add it never felt underpowered. If big miles and low costs are your thing this might well be the engine of choice for you. If on the other hand you’re town-bound, Kia’s thrummy 3 cylinder 1.0 litre petrol is, I’m reliably informed, a little gem. 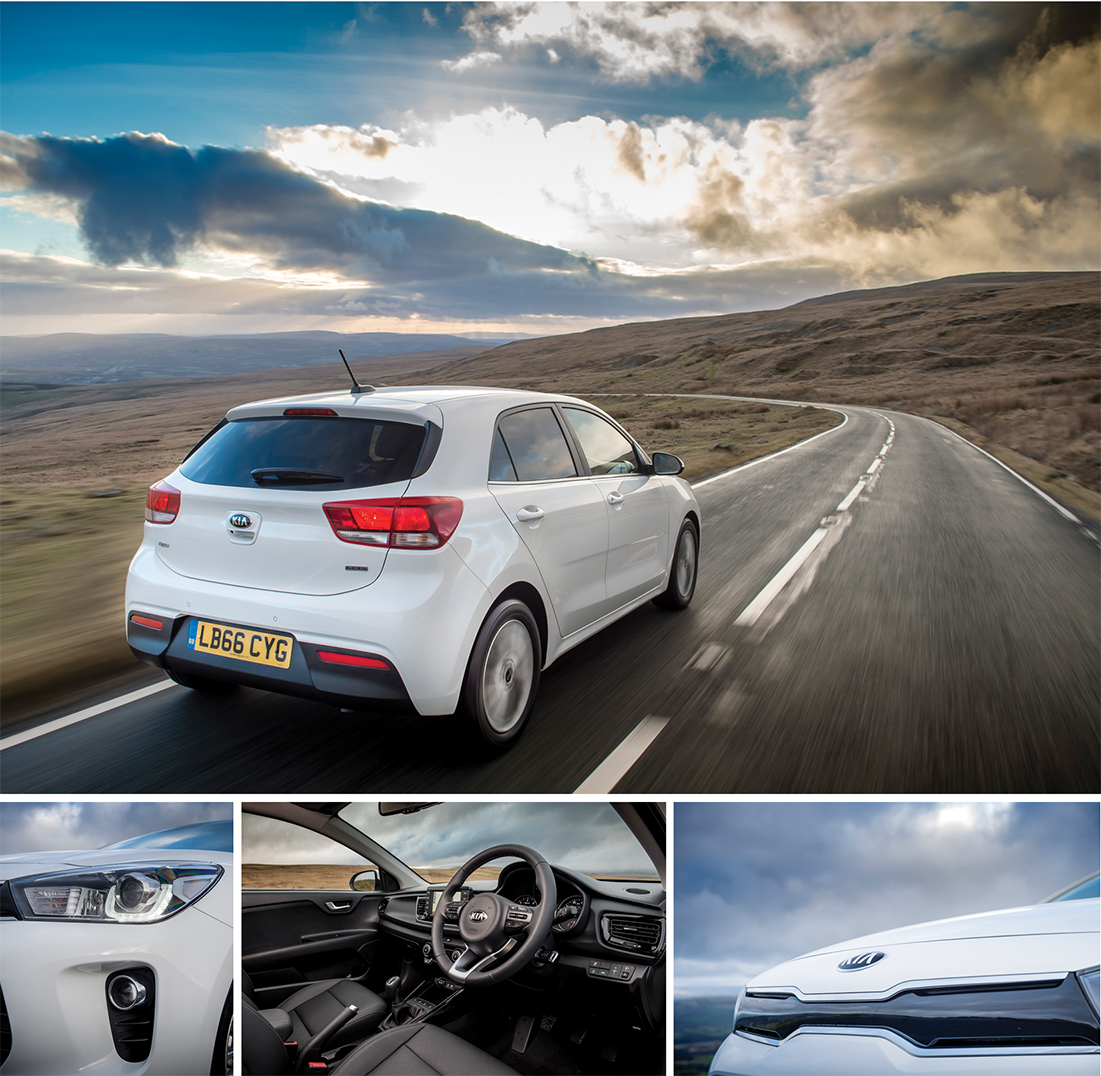 Out on the road the Rio handles tidily. The steering is nicely weighted and direct, if perhaps a tad numb, and the 6 speed gearbox really is a delight to use. If only the ride were better. On broken B-road tarmac the Rio tends to get a bit fidgety and those aforementioned brittle plastics do little to suppress what amounts to quite a lot of road noise at motorway speeds.

Niggles aside. After a week in its company I genuinely think there’s lot to like about Kia’s new Rio. Its size for a start, then there’s all that standard equipment, and let’s not forget Kia’s 7 year warranty. But, it’s not perfect. Some of the trim is still far too “bargain-basement” in feel compared to that offered by the Rio’s competition, and if driving dynamics are what really float your boat look elsewhere. A Fiesta would run rings around a Rio, and a Polo, by comparison, feels like a bank vault build -quality wise – but you’ll need a bigger budget for both.

As I said, in the Supermini market place you have to be really good – and then some. The Rio is actually really good, but… it lacks the then some, the finishing touches that make something really stand-out. That said, the gap between the Rio and its aforementioned main rivals gets ever smaller.

Many thanks to Moyosola at KIA’s UK press office for the loan of the RIO www.liam-bird.com     @bird_liam