Medium height, medium build, just under medium life expectancy. At first glance all things would point to alders being very average trees. But nothing could be further from the truth. Almost impossible to drown, with the ability to not only colonize but actively fertilize poor soils, and with wood that does not rot underwater, our average alders have secret superpowers. 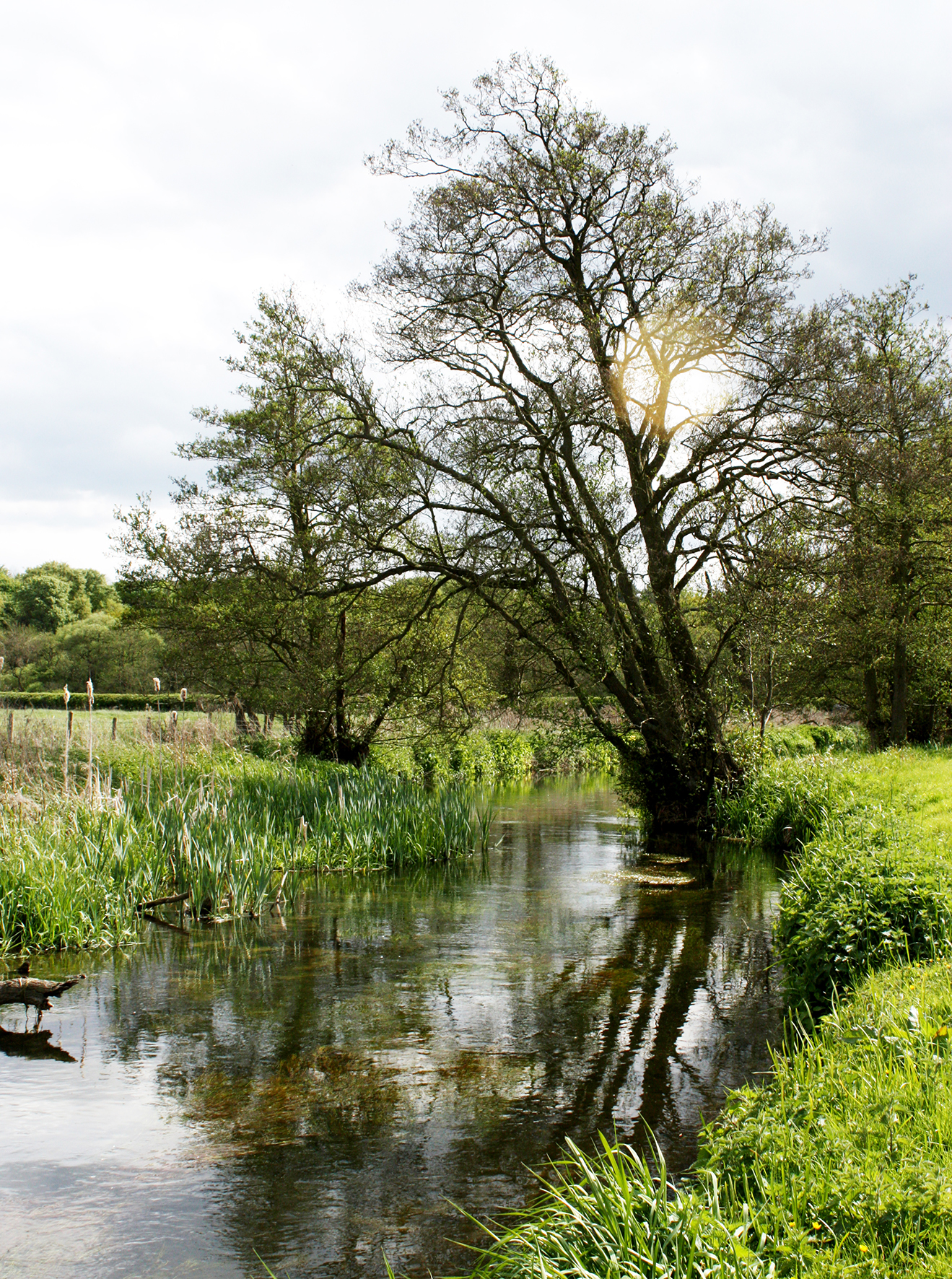 Alders (Alnus glutinosa), also referred to as common alders or black alders, like water and light. As a result, open waterside habitats along rivers, streams and lakes are where they are most at home (photo 1). Alders have special air-conducting tissues which supply the roots with oxygen even when the ground is waterlogged. This allows alders to grow closer to water than most other tree species. The air enters the roots through breathing pores (lenticels) near the base of the trunk, so as long as that area remains above the water level, the roots can continue to respire normally and the tree is in no danger of drowning.

While they are well adapted to swampy habitats, alders are not dependent on them. As long as the ground is reasonably moist, they can thrive in a variety of soil types, including poor soils which do not support any other trees. Their ability to thrive in very poor soils is due to the bacterium Frankia alni which lives in symbiosis with the alder. This bacterium inhabits nodules along the roots and receives sugars which the tree produces through photosynthesis. In return, Frankia alni makes nitrogen available to the tree, effectively acting as an in-house fertilizer factory. Not being dependent on external nitrogen means that alders do not have to scrimp and save to retain it as other trees do. In the autumn, for example, alders often do not bother to fully break down the chlorophyll in their leaves to reclaim the nitrogen, instead drop-ping their leaves while still quite green.

As a result, the leaf litter of alders is high in nitrogen and, over time, soil colonised by alders becomes rich and fertile. This often heralds the beginning of the end for the alders in this particular area. As other tree species move in and grow tall, young alders fail to compete because they are very sensitive to shading, so over time the pioneering alders are replaced by other species they have inadvertently paved the way for. The alder’s ability to bring fertility back to depleted soils is actively made use of, for example in the reclamation of industrial sites.

Mature alders are among the easiest trees to identify all year round because of their unusual – and rather attractive – woody false cones. These false cones (really woody catkins) contain their seeds and remain on the tree long after the seeds have been released (photo 2). 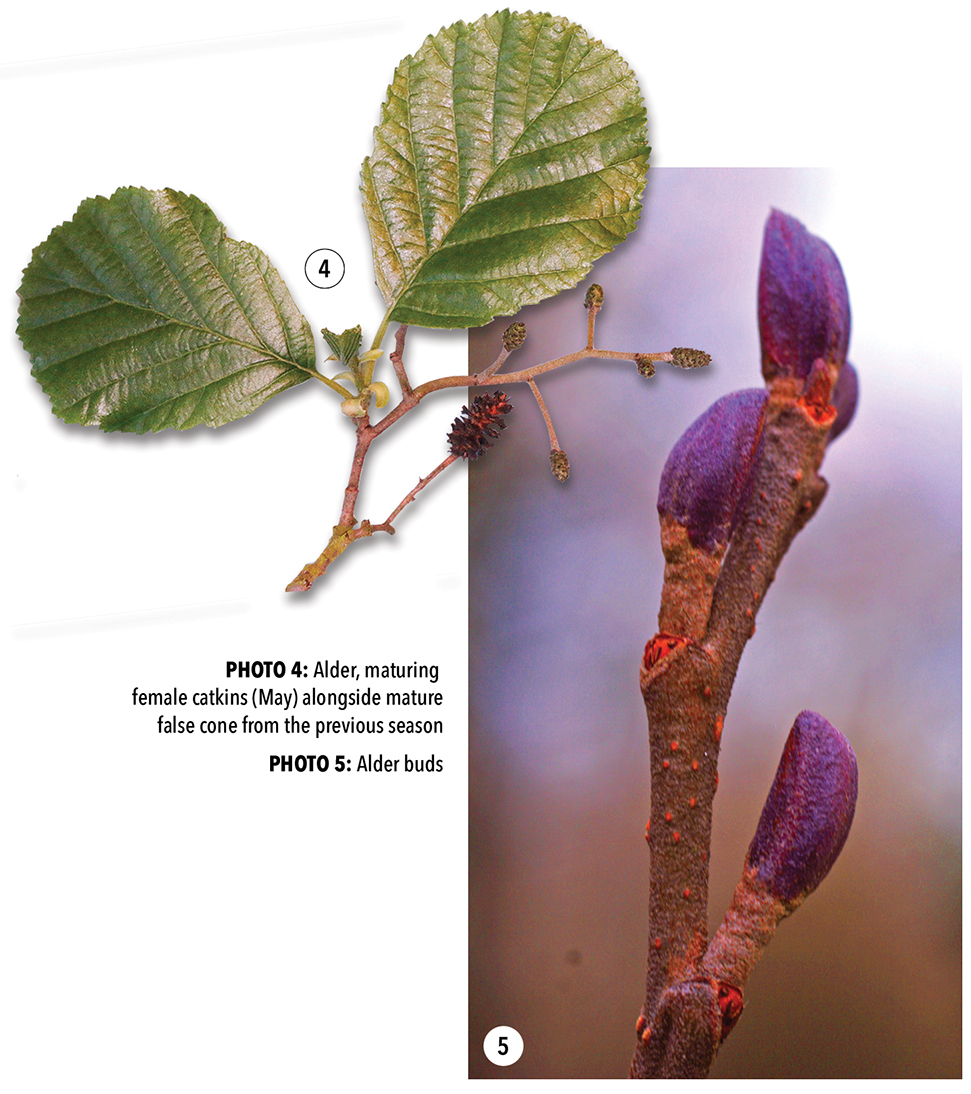 Alders are monoecious, each tree producing both male and female flowers, so ‘cones’ are found on every tree old enough to flower. They start off as diminutive reddish female catkins which typically flower in February, alongside the much more showy male catkins (photo 3). By May they will have turned greener, but are still very small (photo 4). During the course of the summer the catkins become increasingly plump and finally mature during the autumn and winter. The tiny seeds may remain inside the ‘cones’ until the following spring. The seeds are equipped with little lobes containing air pockets, which allow them to float on water for prolonged periods, allowing them to spread far from the parent tree should they land in moving water.

Young alder trees which are not yet flowering have to be identified from other features. During the winter, the buds are a good starting point. They are held on short stalks and are a 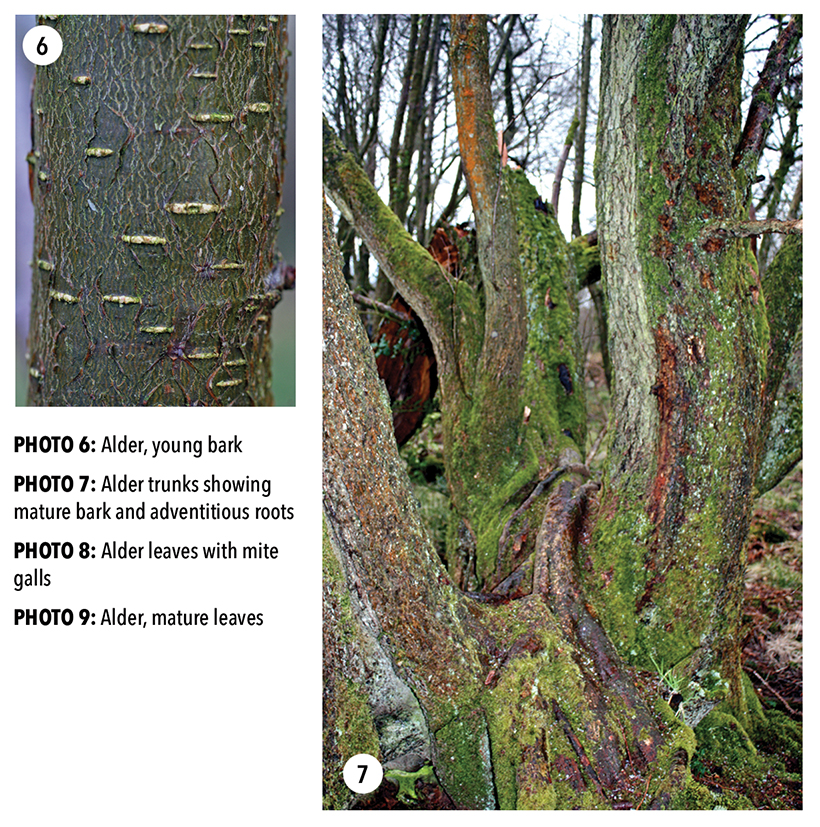 distinctive ‘boxing-glove’ shape and usually mauve in colour (photo 5). Alder bark, though not as distinctive as that of some other trees, is also worth inspecting. Young bark has prominent lenticels (photo 6), whereas mature bark becomes quite fissured and is often colonized by mosses and lichens (photo 7). Alders are unusual in their ability to form adventitious roots from high-er up the trunk (visible in photo 7, centre), especially in situations where the ground is very wet .

Once the trees have come into leaf identification is straightforward because alder leaves are easily recognizable. They are racket-shaped and gently tapering towards the short leaf stem. Young leaves can superficially resemble those of hazel, but alder leaves have a smooth surface and their tips are never pointed. 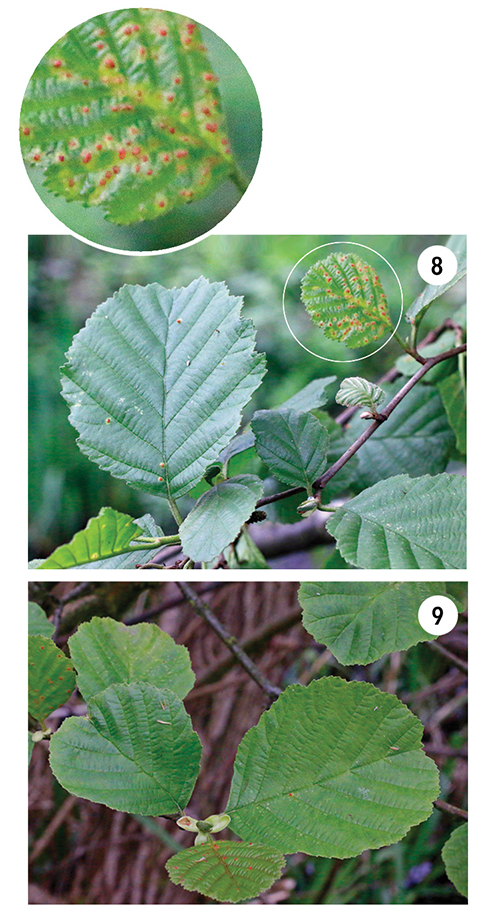 The small pink galls of the alder gall mite Eriophyes laevis can often be seen on the leaves (photo 8). As they mature, many alder leaves develop a telltale indent at the tip (photo 9), making them quite unmistakeable.

Young alders are very fast growing and can reach a height of four metres in their first five years. Alder wood is soft and easily worked and used to be a favourite for making clogs, the historical version of steel toe cap boots. It is still popular for making furniture, ornaments and toys. Because alder wood is not very resistant to weathering it only lends itself to indoor applications. It does, however, have a very surprising property: despite its poor durability when exposed to the elements, if it is constantly immersed in water it becomes strong and virtually impervious to rot, so much so that much of Venice is resting on alder piles.

There is one thing that is currently casting a shadow over the future of alders, namely the newly evolved aggressive fungal pathogen Phytophthora alni, which was first discovered in Britain in 1993. It weakens and ultimately kills alders and has already led to severe losses of trees in Britain and across Europe, particularly in alder populations along rivers. It now seems that, very occasionally, a tree is able to recover from infection.

Hopefully these resistant individuals will be able to reproduce and make up for the losses, so that the future will be bright for our multi-talented, unassuming alders.