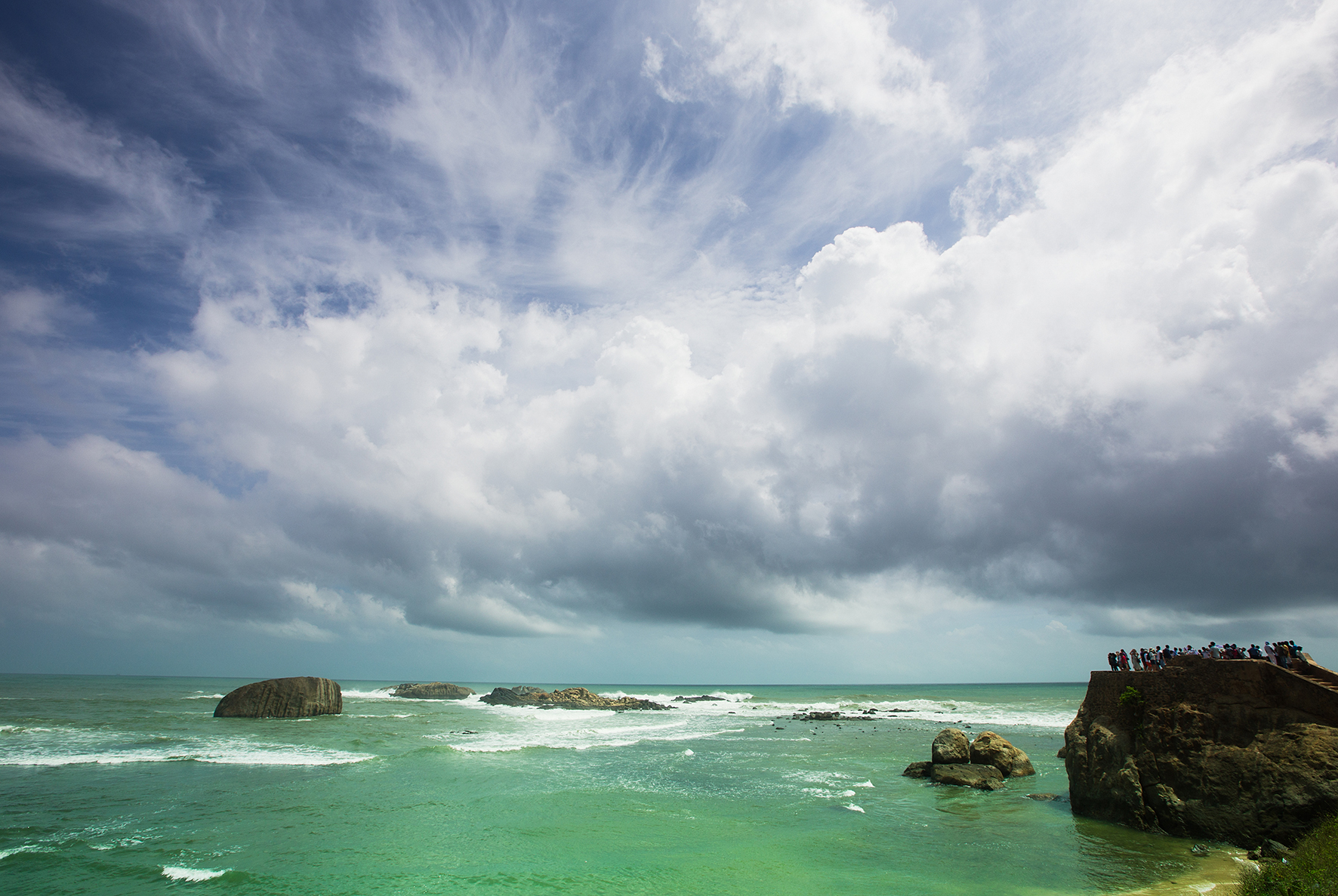 Flag Rock Bastion at the southernmost point of the fort at Galle, where locals gather to look out for whales

With its green seas and blue skies Sri Lanka’s deep south is one of the most beautiful places on earth. An endless array of temples, wildlife and cricket add to the effect, making the pear-shaped island off the coast of India a photographer’s dream come true, and a real treat for the travel connoisseur. Bay’s Nick Smith went to modern Ceylon to find out more. 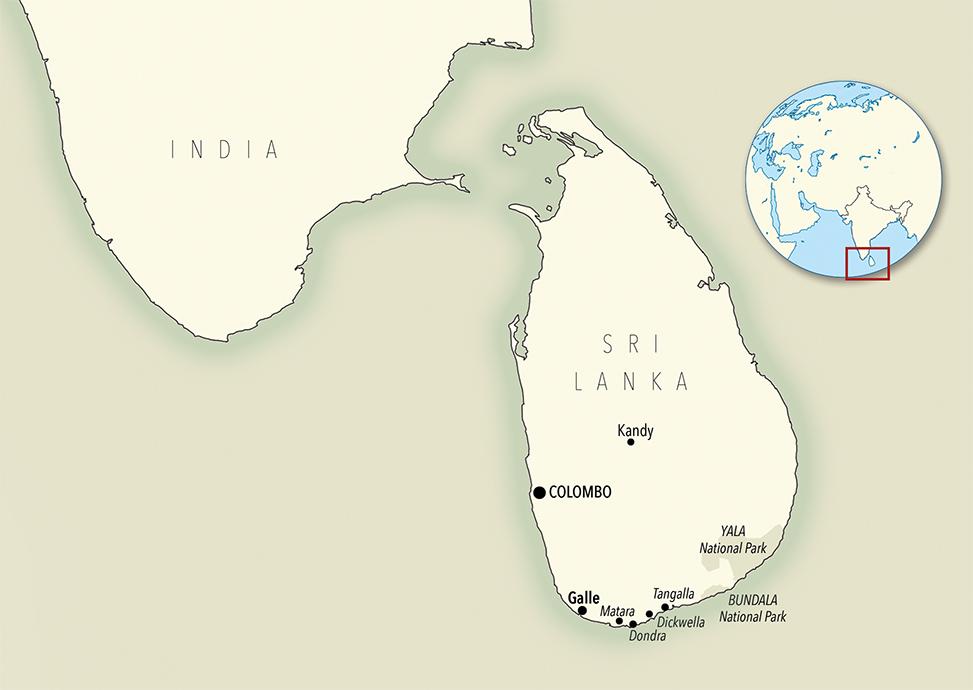 If you look due south from the ramparts of Galle, there is nothing but blue sky and the tea-green Indian Ocean, as far as the eye can see, and indeed beyond, until you reach Antarctica. Today, in Sri Lanka’s ‘deep south’, on a fresh breezy afternoon, while locals are hoping to catch a glimpse of whales sunbathing in the warm waters, there’s not much to remind the visitor that much of this coastline was obliterated when the Boxing Day tsunami of 2004 wrought untold havoc in terms of loss of life and destruction of property. While buildings were lifted clean from their foundations and fishing boats were washed many miles inland, the people of Galle took refuge in the shadow of these monumental fortifications that held back the sea and saved countless lives. 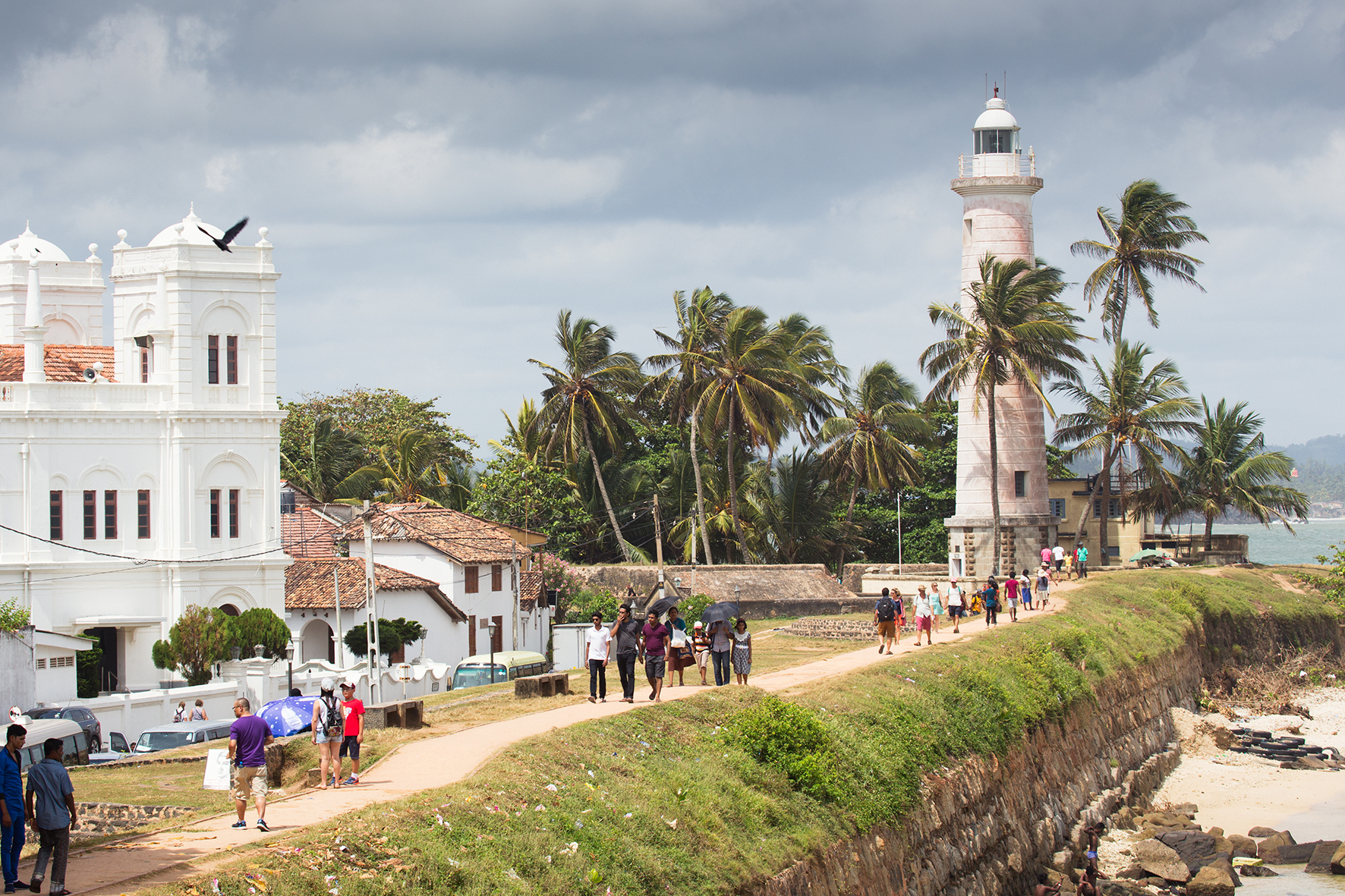 But now the seas are calm and you can clearly make out the curvature of the earth on the horizon. Despite the promenade teeming with life, there’s a definite feeling of isolation, of being perched on the edge of the earth. Snake charmers and sellers of side-show remedies ply their good-natured trade to equally good-natured travellers, who gladly exchange a few dollars for their hero shots, posing with not-so-venomous serpents and falling for three-card tricks. They’re here, of course, because Galle is Sri Lanka’s phoenix rising from the ashes, where cafes and restaurants, galleries and gift shops have sprung up, where property prices are soaring and where, to the end-less distraction of children of every age, there are monkeys and crows stealing food and chattering in the equatorial sun.

Snake charmers are best avoided, unless you actually want to part with your money / Officially it’s Galle International stadium, but it’s known as Esplanade and home to Galle Cricket Club

Oddly enough, my journey to what Marco Polo called “the finest island in the world” started in Tanzania, where on a small bush plane, I met a woman I distantly knew through a friend of a friend at the Royal Geographical Society in London. As we flew north towards the Ngorongoro Crater, she mentioned that she had a boutique in Galle, to the very south of Sri Lanka, and that the next time I was in her neck of the woods I should pop in for a cup of good old-fashioned Ceylon tea. Vaguely aware that there’s a test match cricket ground in that part of the world, I filed the conversation away in the mental compartment reserved for things I’ll probably never get around to, but nonetheless sound like a good idea. 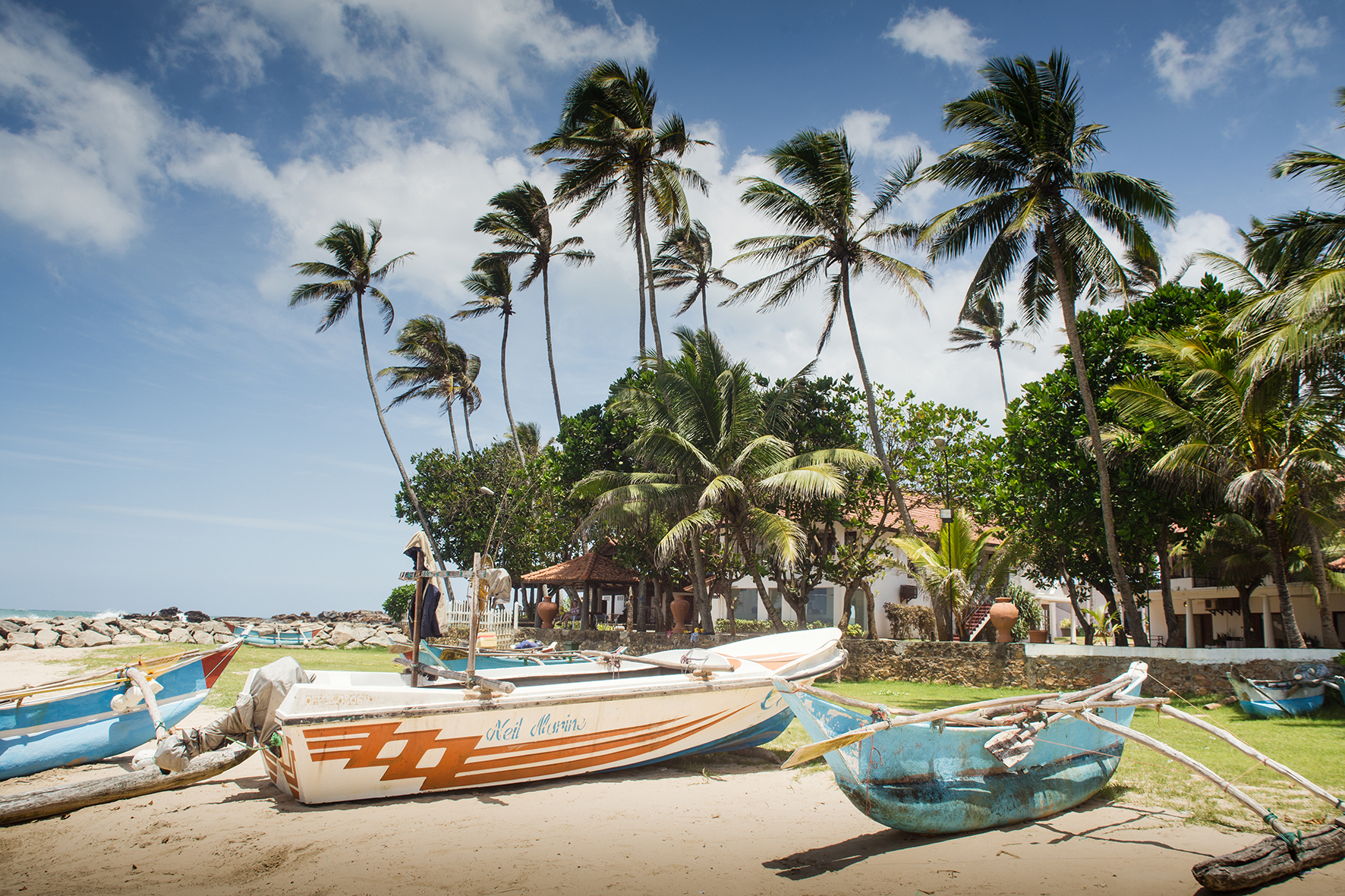 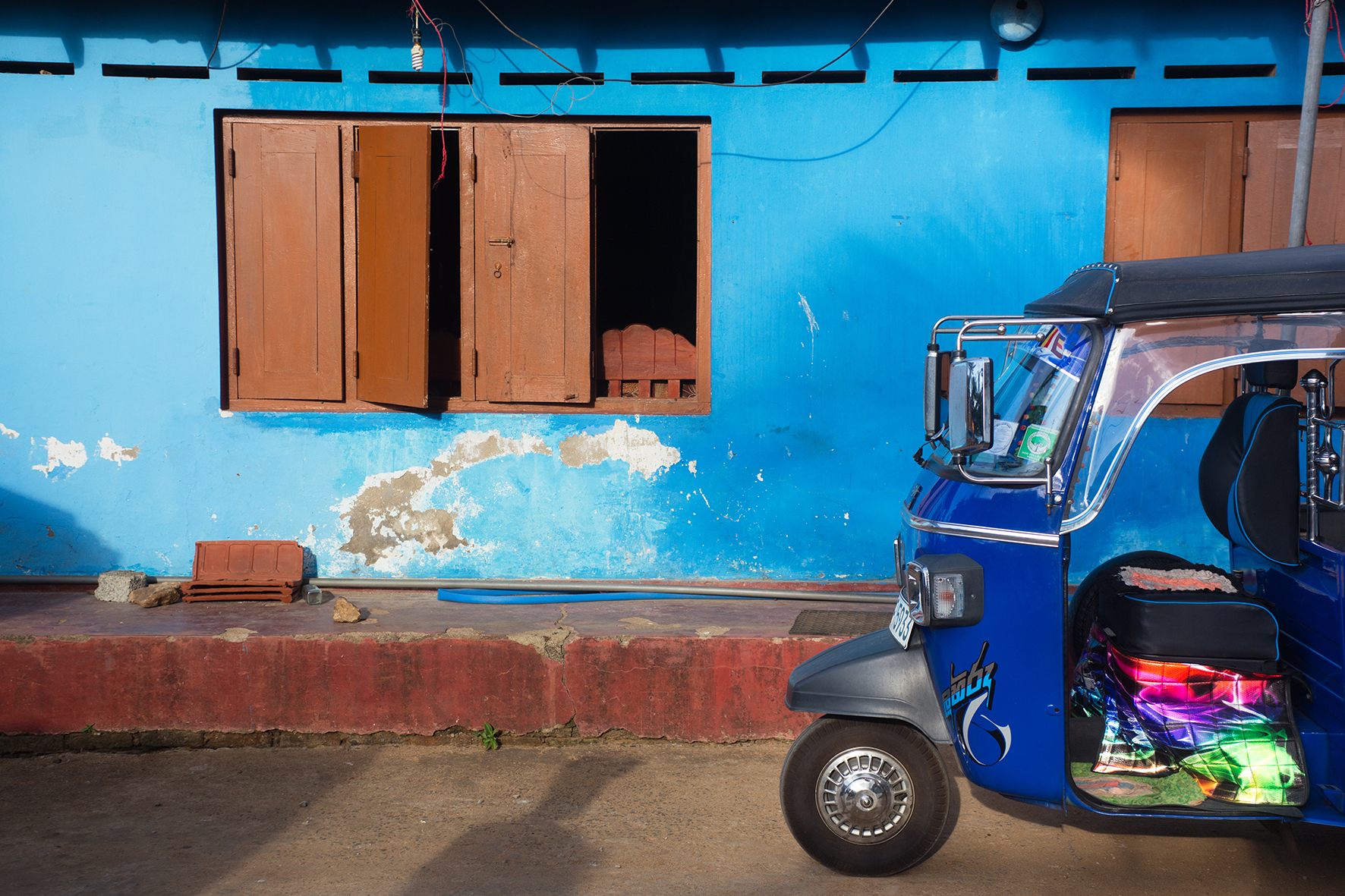 You see them everywhere in Sri Lanka. This smart new tuk-tuk is parked up in the fishing village of Kudawella

And so it was something of a surprise six months later to find myself weaving through the bustling cobbled streets of Dutch colonial Galle looking for my friend’s house. And it was something slightly more of a surprise when I got there to find that it was on fire. Admittedly this wasn’t quite the towering inferno, but there were plenty of flames, great plumes of smoke and, as it was a public holiday, a distinct absence of fire engines. I was later to find out that in Sri Lanka everyday dramas such as these have a way of working themselves out, and by the time the fire had been extinguished, the only real harm done was to the electricity supply for the block, which had been knocked out. This in turn caused chaos among the local restaurants, cafes and ice cream vendors, who went into a collective panic because their refrigeration systems had packed up on a day when it was already 100 degrees in the shade. “Welcome to Sri Lanka,” said Jo in between calmly directing the scene in various languages. “Have I come at a bad time?” I replied. “Not really,” said Jo. “It’s pretty much like this every day”.

A journey through the jungle 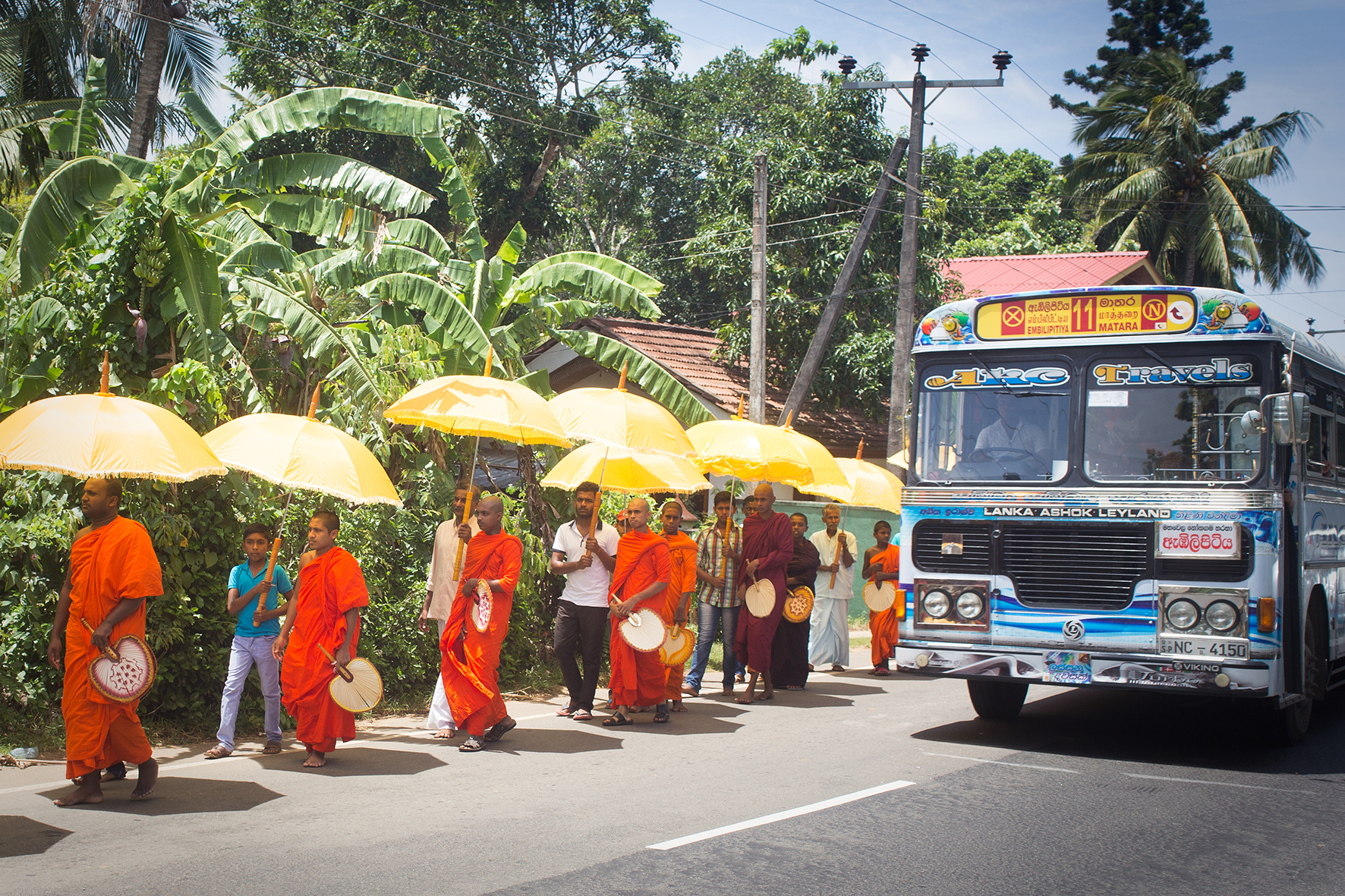 Monks in saffron-dyed robes on the road to Tangalle

Within minutes of clearing customs and immigration at Colombo airport it becomes completely obvious that Sri Lanka is a photographer’s dream come true. Driving down the dual carriageway to the coast, the jetlag soon evaporates as I get a taste of things to come in the form of domed temples, rice paddies, faded colonial mansions. As modern roads slowly give way to narrow country tracks overrun with entire families crammed into motorised rickshaws called tuk-tuks (named after the sound of their three-cylinder engines), traditional Sri Lanka blooms into life. Processions of Buddhist monks go about their business in saffron-dyed robes, sheltering from the sun beneath ornate parasols. Dogs laze around in their compounds and cattle wander oblivious to the traffic. 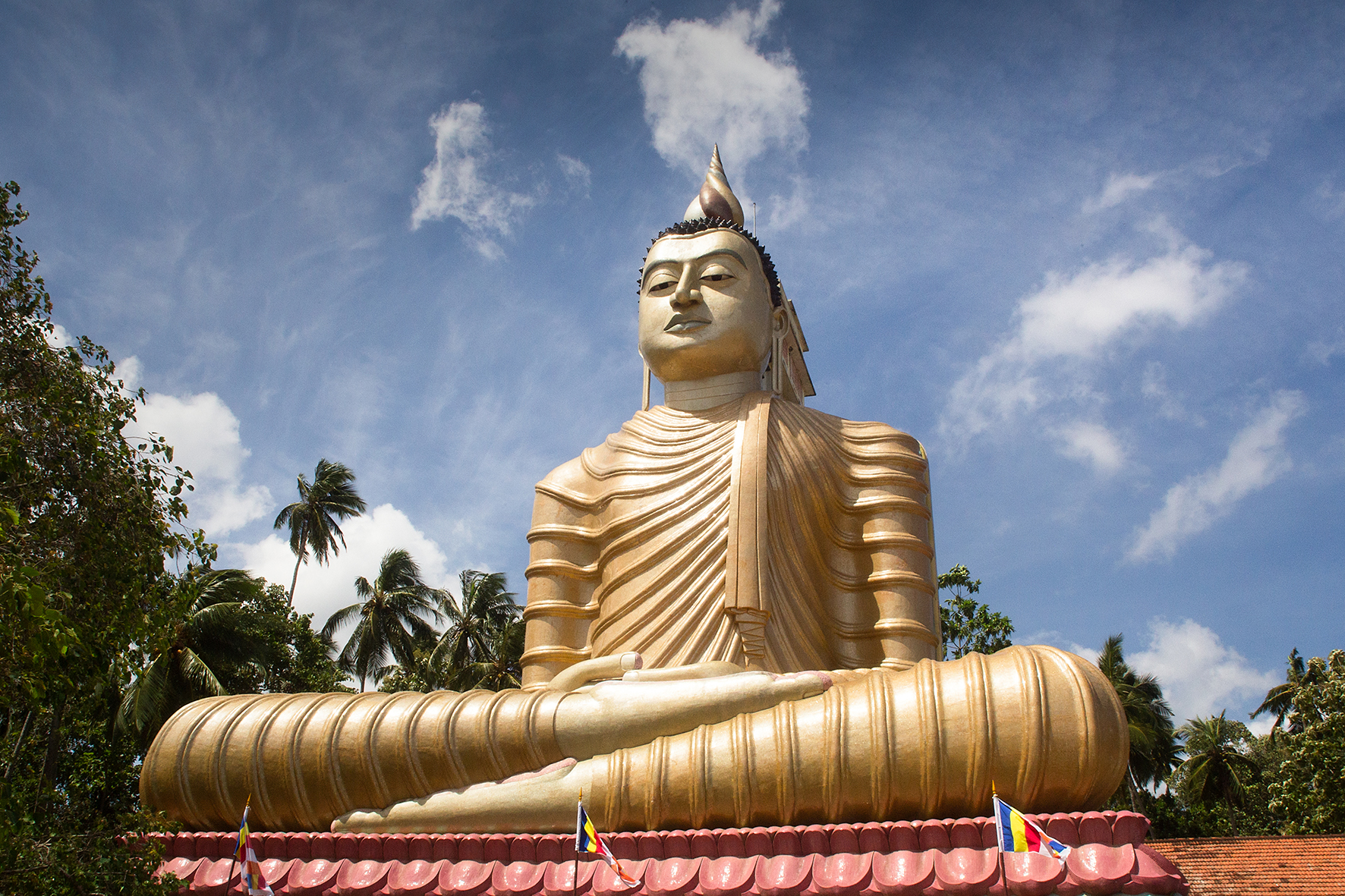 At 160ft, the ‘big Buddha’ at the Wewurukannala Vihara temple near Dickwella is the biggest statue in Sri Lanka 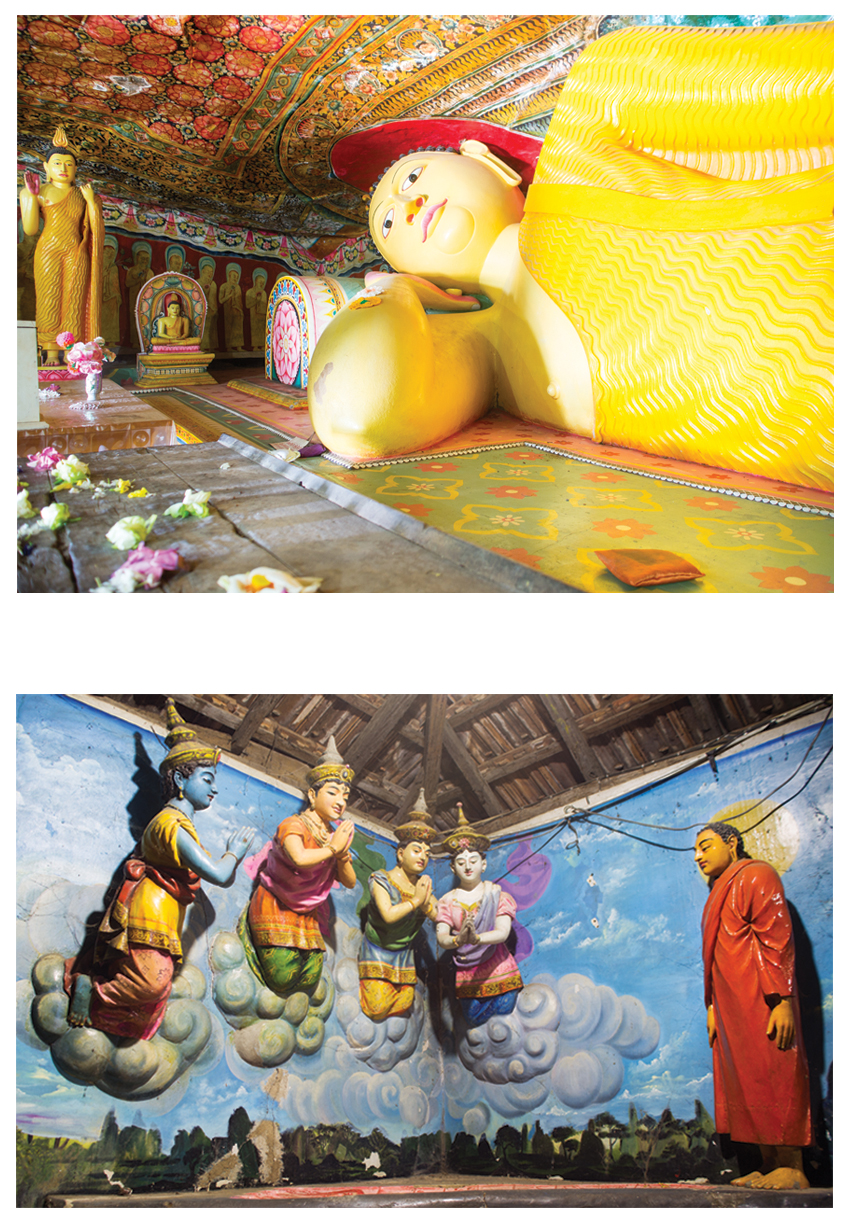 I drop anchor in the sleepy village of Dickwella, where time seems to have stood still for generations and where there is barely a British tourist in sight (reminding me of that wonderful line in Laurence Sterne’s 18th century travelogue A Sentimental Journey in which he says ‘an English man does not travel to see Englishmen’. He meant ‘Welsh’ of course). After rubbing off the rust of two long haul flights (Gatwick-Muscat, Muscat-Colombo) with a much-needed G&T, it was time to get out the map and start exploring. But you don’t really need a map, especially if you want to see temples, because they are everywhere. But getting around isn’t always easy, and if you really want to get to see old Sri Lanka at its best you will need a guide. Before long I’m chugging along in Sami’s tuk-tuk, learning the local history. One of my favourite books about the island is Ceylon Beaten Track, and very soon I am embodying the spirit of its author W T Keble, searching out the remains of the colonial history along the coastal region, where another of my favourite books about Sri Lanka – Leonard Woolf’s murder mystery The Village in the Jungle – is set. 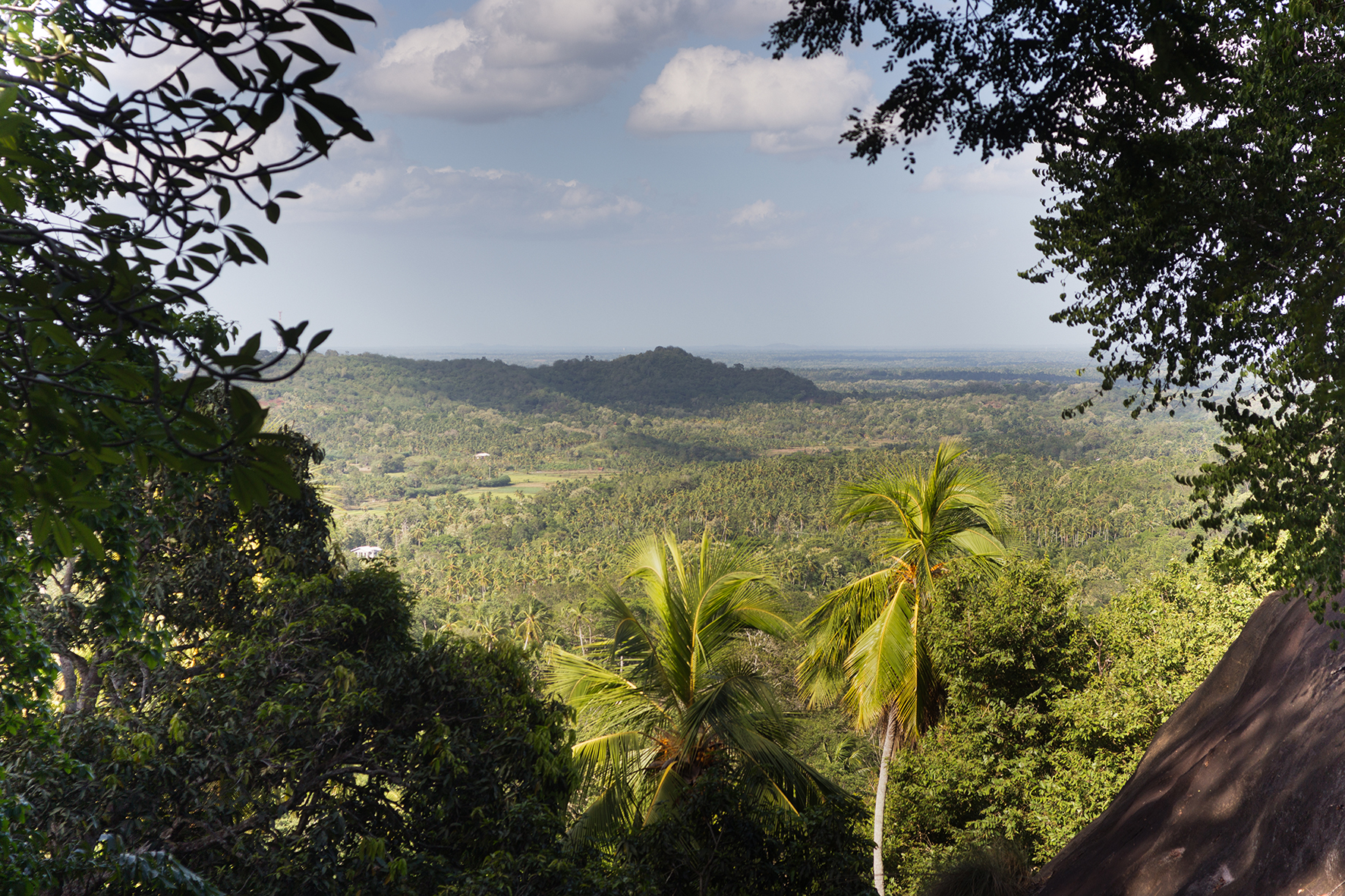 Palm plantations in the Bundala region, seen from Mulkirigala temple 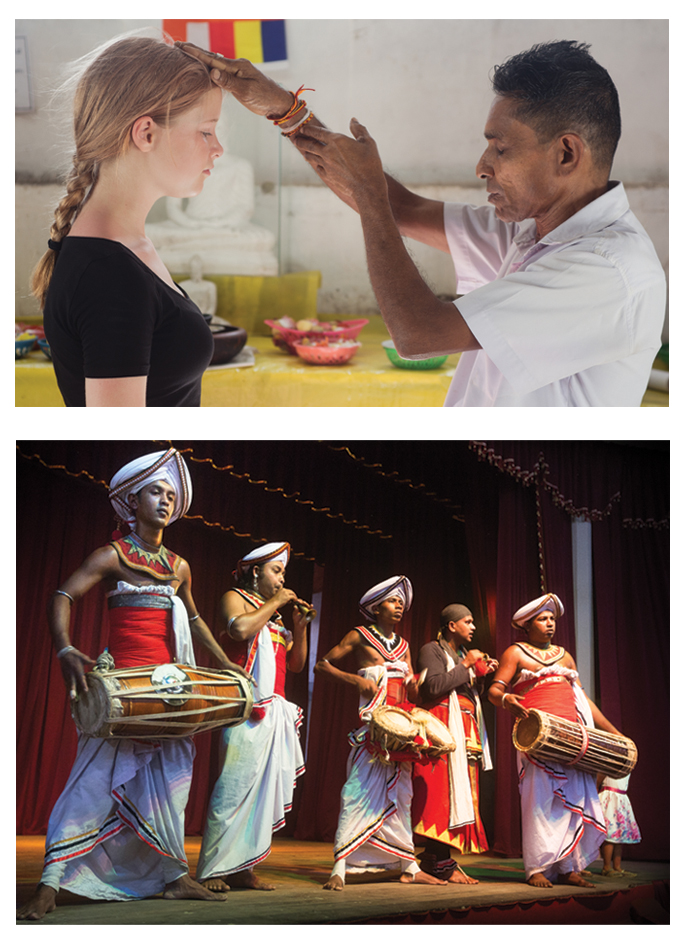 More than 500 stone steps up the mountain to receive a blessing at Mulkirigala temple / High in the mountains interior, Kandy has a rich tradition of dancing and drumming

Day follows day of peaceful roaming among the temples. From the seaside towns of Dondra and Tangalla to the famous game-viewing Yala National Park in the east; from the mountain city of Kandy (where there is the fantastic Temple of the Tooth) to the plantations of Bundala, Sri Lanka is a feast for the eyes and camera lens. The only stain on the copybook here is the depressing way in which so-called temple elephants are treated.

Before we start getting smug about animal welfare it’s probably worth remembering that when we British arrived in Sri Lanka in 1796 there were more than 30,000 elephants roaming the 25,000 square mile island (that’s roughly three times the size of Wales). At more than one elephant per square mile, that can be chalked up informally as a flourishing population. But because the British needed the land to grow coffee – later tea, for which the island is now famous – we cleared out most of the jungle, leaving the elephants with nowhere to live. Loss of habitat caused the population to crash, while those that survived the felling of the forest were routinely hunted and killed by the senior ranks of the British Army. Meaning that it’s more by luck than judgment that there are any elephants on the island today. But, by some miracle of conservation, there are still 5,000 in Sri Lanka, mostly in protected areas such as the Yala National Park. These really are the lucky ones because those that live outside such protected areas lead miserable lives in ‘orphanages’ and temples, while remaining vital to local economies, drawing in tourists and much-needed cash donations. 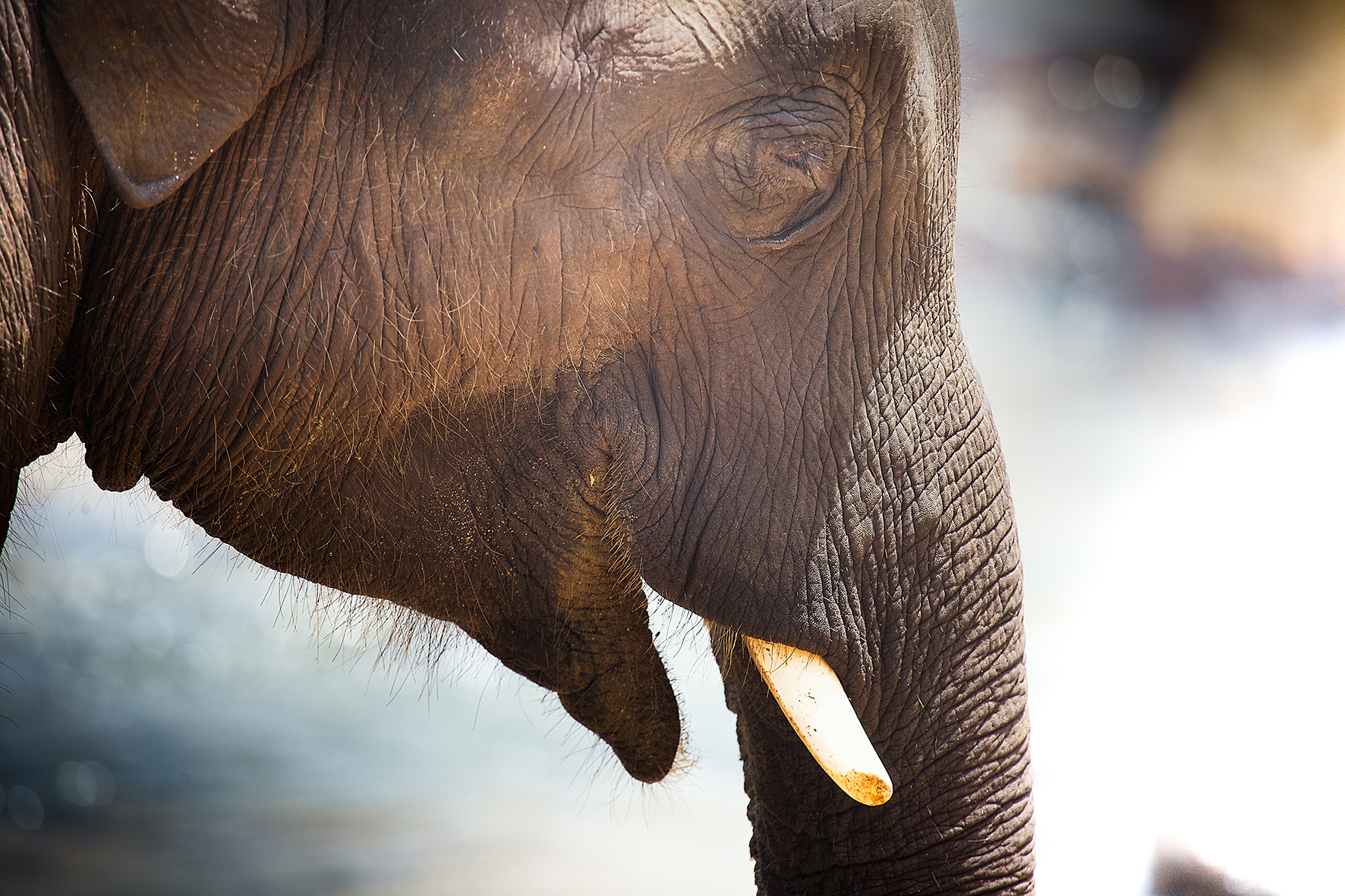 Elephant orphans of Pinnawala in Kegalle. They might not be temple elephants, but they aren’t wild. At least they get to play in the river for 4 hours a day 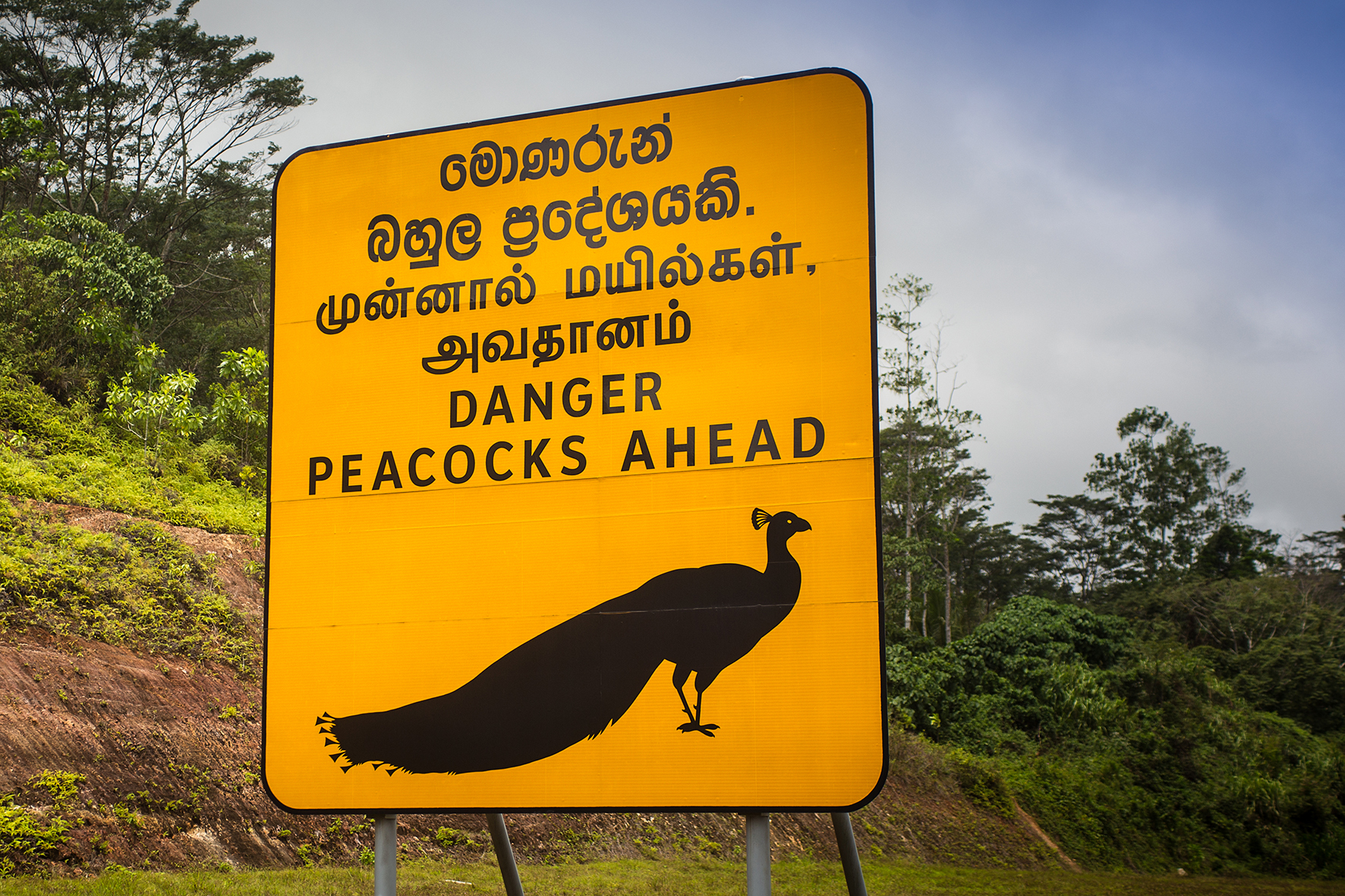 Or peacocks, which can cause serious trouble on the motorway

When I mention the plight of the temple elephants to Sami, the smile leaves his face for a moment as he explains that it’s a bit hypocritical of me to tell his country how to look after its elephants, when it was my country that caused all the environmental problems in the first place. More than hypocritical, I 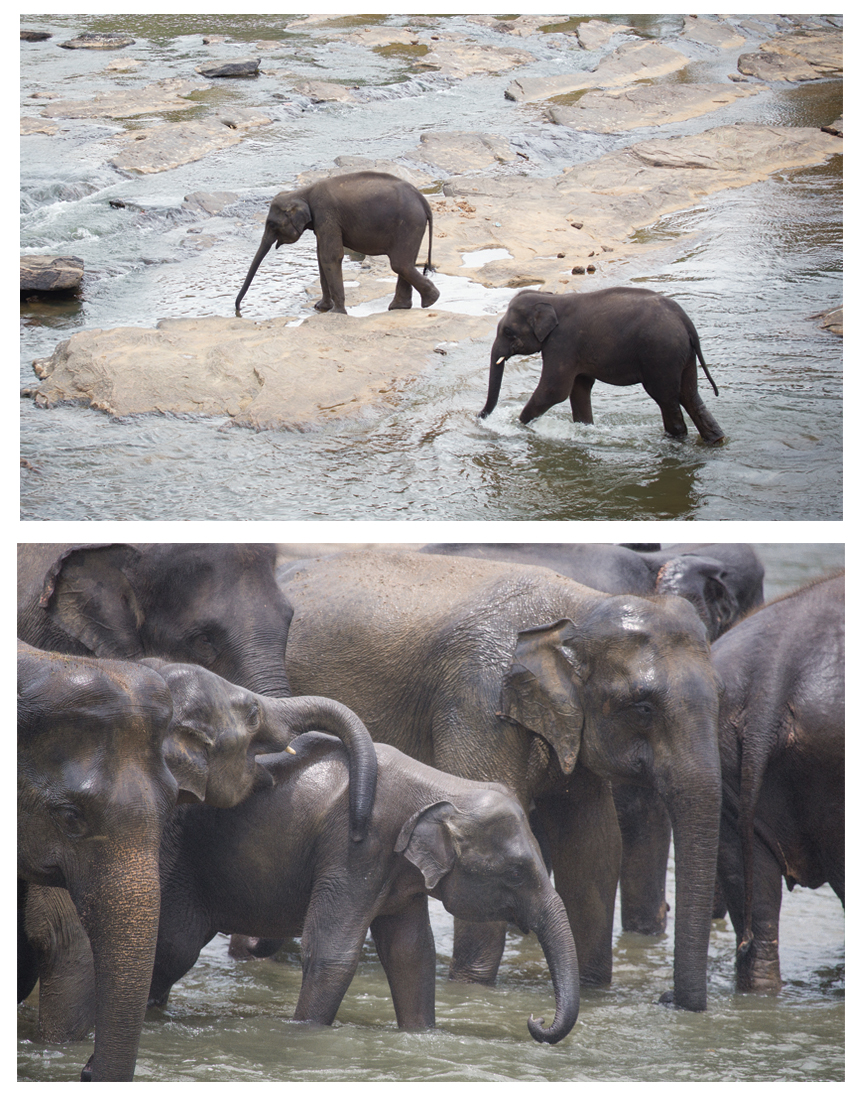 thought: downright colonial. The real problem with elephants in Sri Lanka though is one of perspective, and I didn’t think it a good use of anyone’s time for me to huffily write to the Sri Lankan government to tell them how to do things when they’re still rebuilding their country after it was ripped apart by the tsunami. And besides, everyone feels differently about animals. Here in the UK we display peacocks in ornamental gardens. In Sri Lanka, where they are wild, they are disliked because they cause pile-ups on motorways, where there are huge signs urging drivers to watch out for them.

And with that, we changed the subject to cricket. Once I told Sami that I’d already paid a visit to The Esplanade – Sri Lanka’s international test ground at Galle – and that I’d seen his beloved team play England back home at Lord’s, we were firmly on uncontroversial ground. Everyone here loves cricket and the roadsides are festooned with adverts for everything from paint to 4-wheel-drives, endorsed by such homegrown international superstars as Sanath Jayasuriya, Kumar Sangakkara and Mahela Jayawardene. 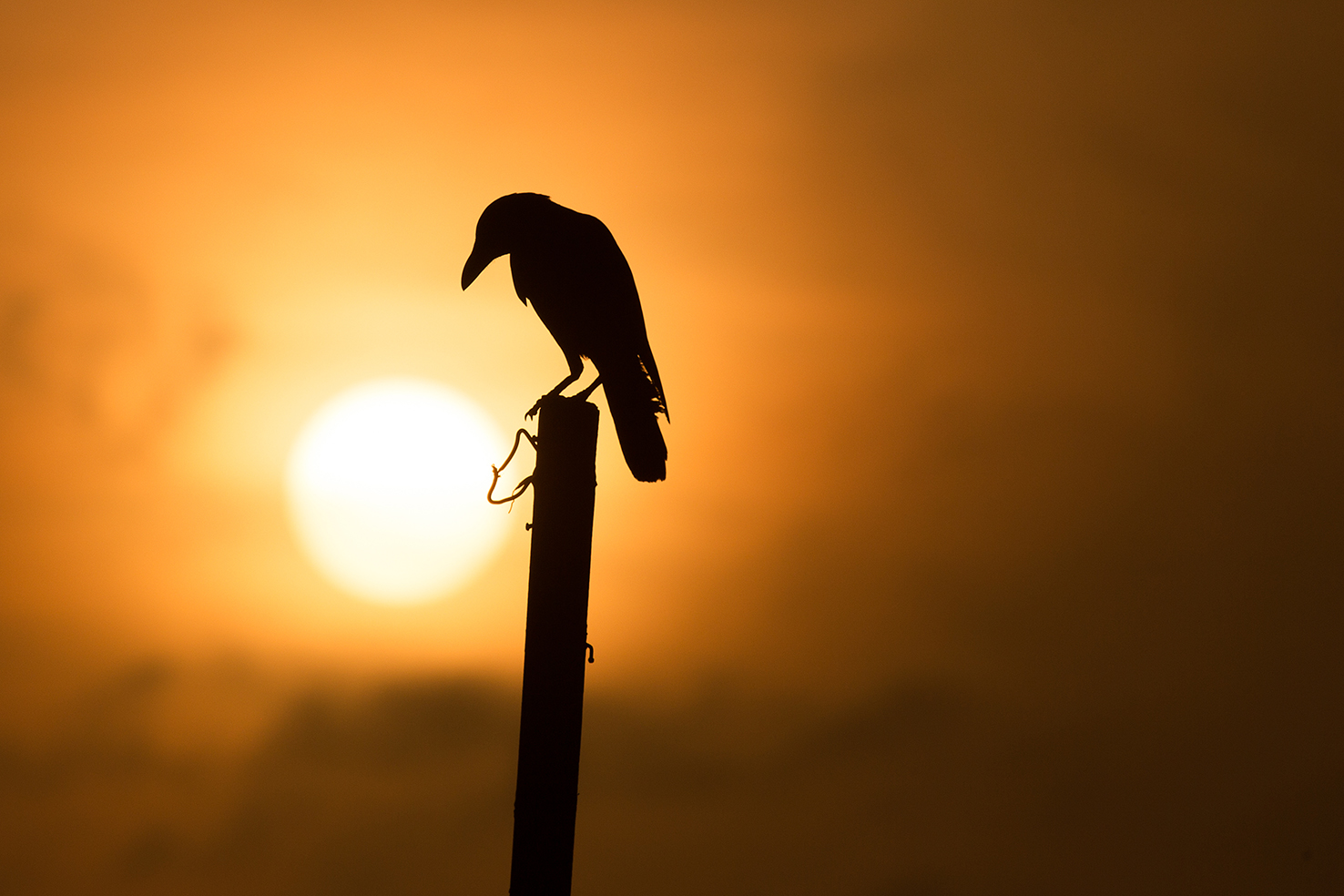 You’re never far from a crow in Sri Lanka

Sri Lanka won’t be on everyone’s to-do list, which is a shame because it’s an exotic jewel of a place that needs to be visited. Holidaymakers inevit-ably get put off by TV images of raging civil wars (which are thank-fully now history), while more intre-pid travellers seem to prefer to take their sub-continental wanderings in India, seduced by those dreary, holier-than-thou travel guides that dismiss Sri Lanka as ‘India-lite’ and somehow less authentic than its northern cousin. But the writers of ‘Rough Planet’ guidebooks are generally speaking a soulless bunch of freeloading hacks, sneering at other people’s cultures, dispar-ageing anything not quite up to their superficial view of what makes travelling cool and trendy. No, Sri Lanka is a refreshing pearl in the shell, where the sea is warm and the sunsets are sublime. It’s also a treasure house of delicately spiced cuisine, with an endlessly pleasant climate, friendly people, and a relaxed atmosphere that can lure you far off the beaten track.