THIS MONTH I AM WRITING ABOUT THE SOCIAL HISTORY OF DENTISTRY. WE TAKE IT FOR GRANTED THAT WE CAN VISIT A DENTIST – YOU MIGHT EVEN BE READING THIS WHILST WAITING TO BE CALLED IN!

Modern dentistry as we know it came into being after the French physician Pierre Fauchard, the “father of modern dentistry”, published his scientific book, La Chirurgien Dentiste (“The Surgeon Dentist”), in 1728. The two-volume book, describes basic oral anatomy and function, signs and symptoms of oral pathology, operative methods for removing decay and restoring teeth, periodontal disease, orthodontics, replacement of missing teeth and tooth transplantation. The origin of the word dentist comes from the French word dentite, meaning equivalent to dent, and dates to 1750-1760. I will be coming back to the French a little later in the article. 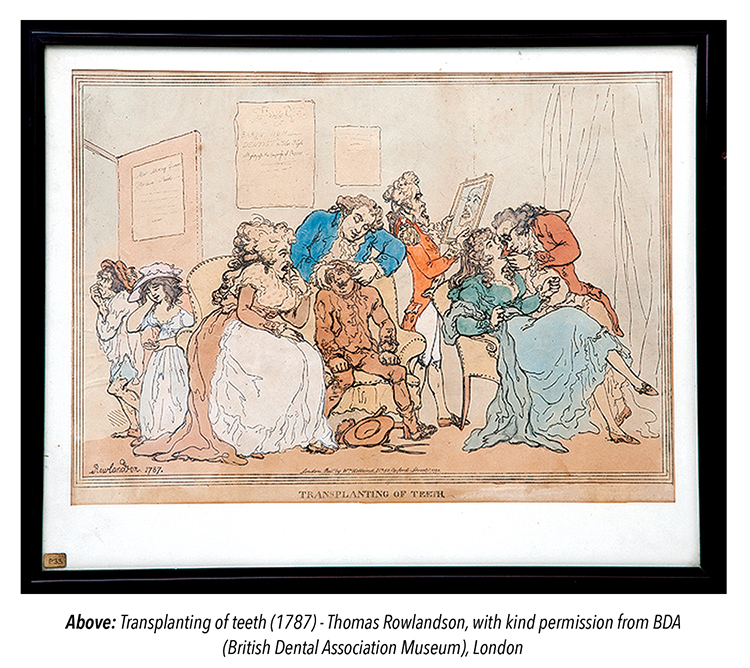 During the 1780s the Swansea Valleys were being developed for the Copper Industry, when Swansea was known as Copperopolis. During this time dentistry was still in its infancy. The only person who would per-form any dental care was the local blacksmith with the use of his pliers for a ‘painless’ dental extraction. The drawback with this was the danger of infection, or simply the poor patient who was having their tooth pulled, would die of blood poisoning. I think I would have put up with the pain.

Those who could afford it would have paid for a tooth transplant. Yes, it’s hard to believe really, but poor children would have sold their teeth.

This is the subject matter of English artist; Thomas Rowlandson’s painting, entitled “Transporting of Teeth” (above). The central scene shows a fashionably attired dentist removing a tooth from a poor chimney-sweep with a tooth key. An aristocratic lady, who is to receive the tooth, watches with apprehension. She resorts to her smelling salts, to overcome the smell of the sweep.

To the rear of the painting, a dandy is examining his newly transplanted tooth in a mirror. Teeth were not only obtained from living underprivileged children, but they were also sourced from the dead.

The demand for false teeth was on the up. People dreaded losing their teeth, as it would make them look older than their years. Without teeth, it was hard to speak intelligibly. At this time, 1780, false teeth were made of ivory (elephant, walrus or preferably hippopotamus), with added human teeth. This would have cost in the region of £100 (£16,000 today).

How were these false teeth kept in the mouth? 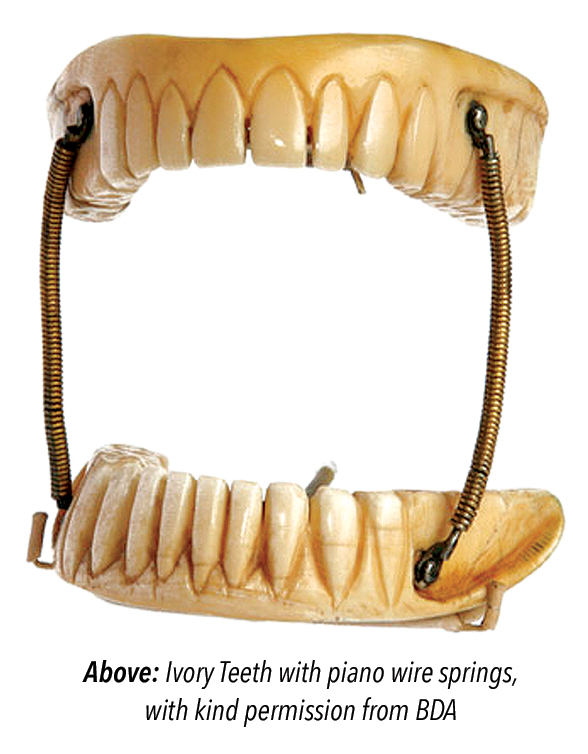 The lower sets were weighted and helped by gravity, the upper set were attached with piano wire springs (right) to the bottom set. These were very uncomfortable to wear, and it was awkward to eat – and they would often fall out. The use of ivory dentures meant that decay soon set in, with the result of a rotten taste in the mouth and evil-smelling breath. 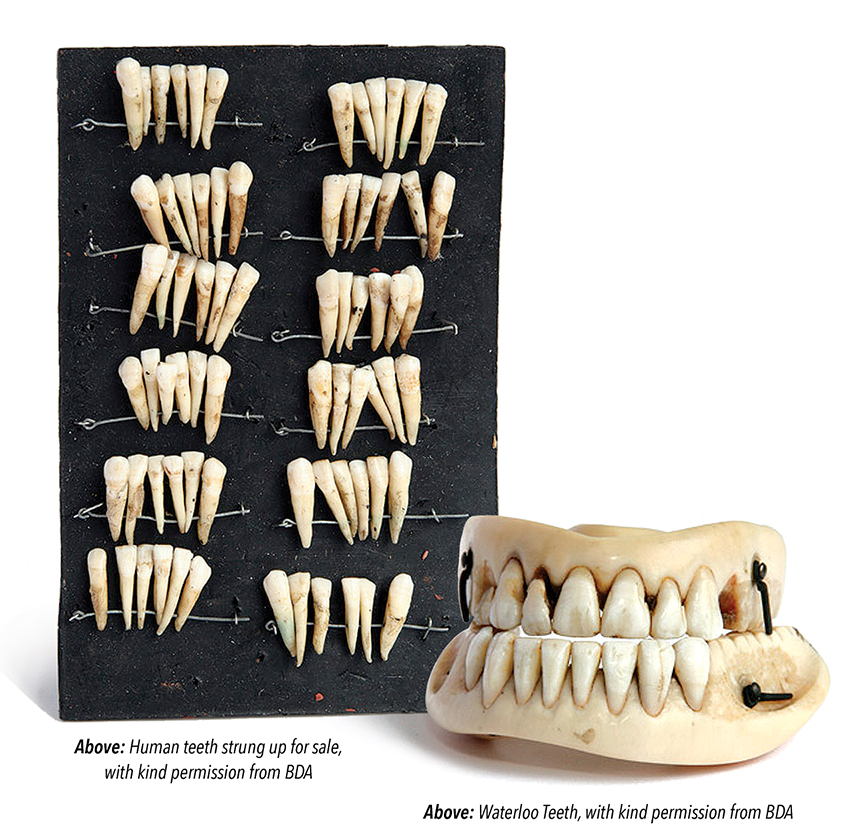 The demand was for real teeth, but the number of live donors was limited – as was those that could be provided by body snatchers. The Battle of Waterloo occurred at the right time for the development of false teeth. On the night after the battle the dead of the French, Prussians and even the British were plundered, savaged, and even looted, which included their teeth. Teeth were sorted and shaped and sold to technicians who in turn would boil them, chop off the ends and shape them into ivory dentures. These came to be known as “Waterloo Teeth” (left). This practice declined due to the Anatomy Act, 1832. This Act, was to stop the body snatchers dead!

During the 1830s visiting dentists, notably Messrs Hart of Bristol visited Swansea. They would announce their arrival with an advert in the The Cambrian. 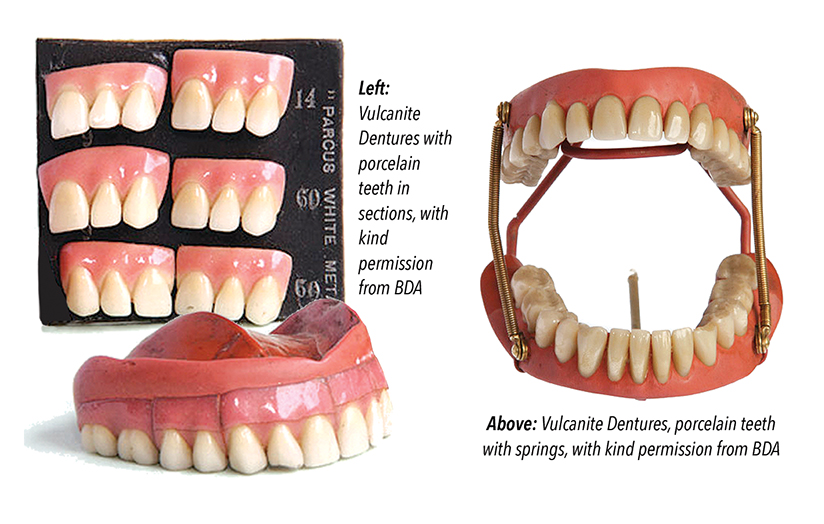 The next breakthrough for dentistry was the use of vulcanite (pics right). Vulcanite is a compound made from Indian rubber, and was developed during the 1840s, by the American brothers Charles and Nelson Goodyear, of tyre fame. Vulcanite was relatively cheap. These teeth were to be used for the next 100 years.

Anyone could set themselves up as a dentist, until the passing of the Dentist Act, 1878. The Act limited the title “dentist” and “dental surgeon” to register-ed practitioners. Those who had practised dentistry for 5 years prior to the 1878 were the only ones to be eligible to 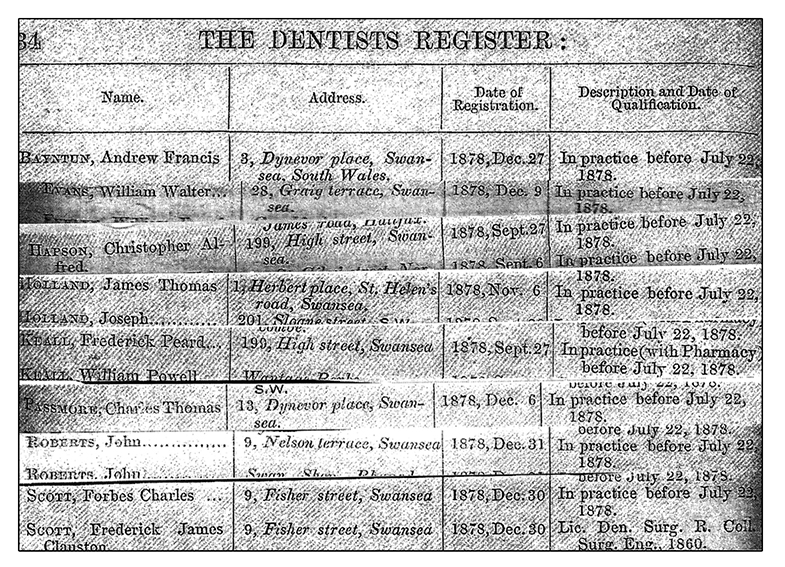 register. The following year, 1879, saw the first publication of The Dentists Register (left).

Thankfully it’s not a thick volume and I found that there were 9 dentists located in Swansea during this time. The majority of the dentists had been in practice before July 22nd, 1878. These dentists are: Andrew Francis Bayntun, 3 Dynevor Place; William Walter Evans, 28 Graig Terrace; Christopher Alfred Hapson, 199 High Street; James Thomas Holland, 1 Herbert Place, St. Helens Road; Frederick Peard Keall, 199 High Street; Charles Thomas Passmore, 13 Dynevor Place; John Robert, 9 Nelson Terrace; Forbes Charles Scott and Frederick James Clauston Scott, 9 Fisher Street. Do you or anyone you know have connections with any of the named? 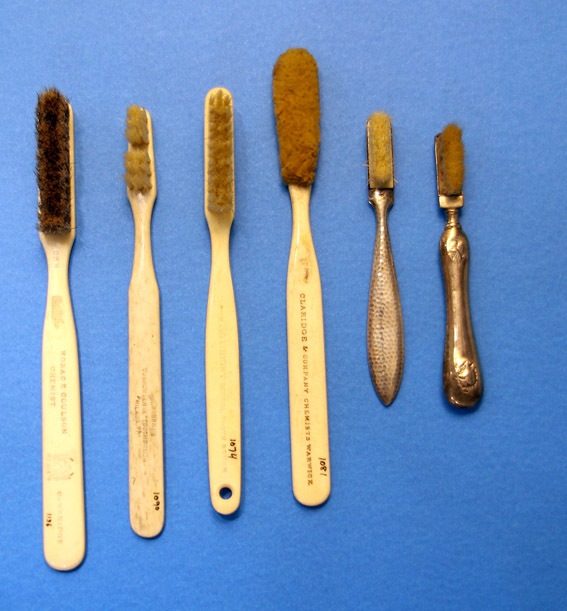 In one article I came across in the The Cambrian dated 16th March 1811, Mr Crawcour a travelling dentist, well known in Wales sues for loss of 9 toothbrushes valued 4d. 10s. at Shrewsbury. Toothbrushes (right) would have been bone handled and the bristles would have been made from the hair of Serbian pigs (hard) moving to British badger (soft). Only the dandies about town would have been able to afford these silver handled toothbrushes.

The use of toothpaste (below) didn’t come about till the 19th century, when they were homemade and made with chalk, pulverized brick or salt.

Next month: is there a doctor in the house? With a dark twist. 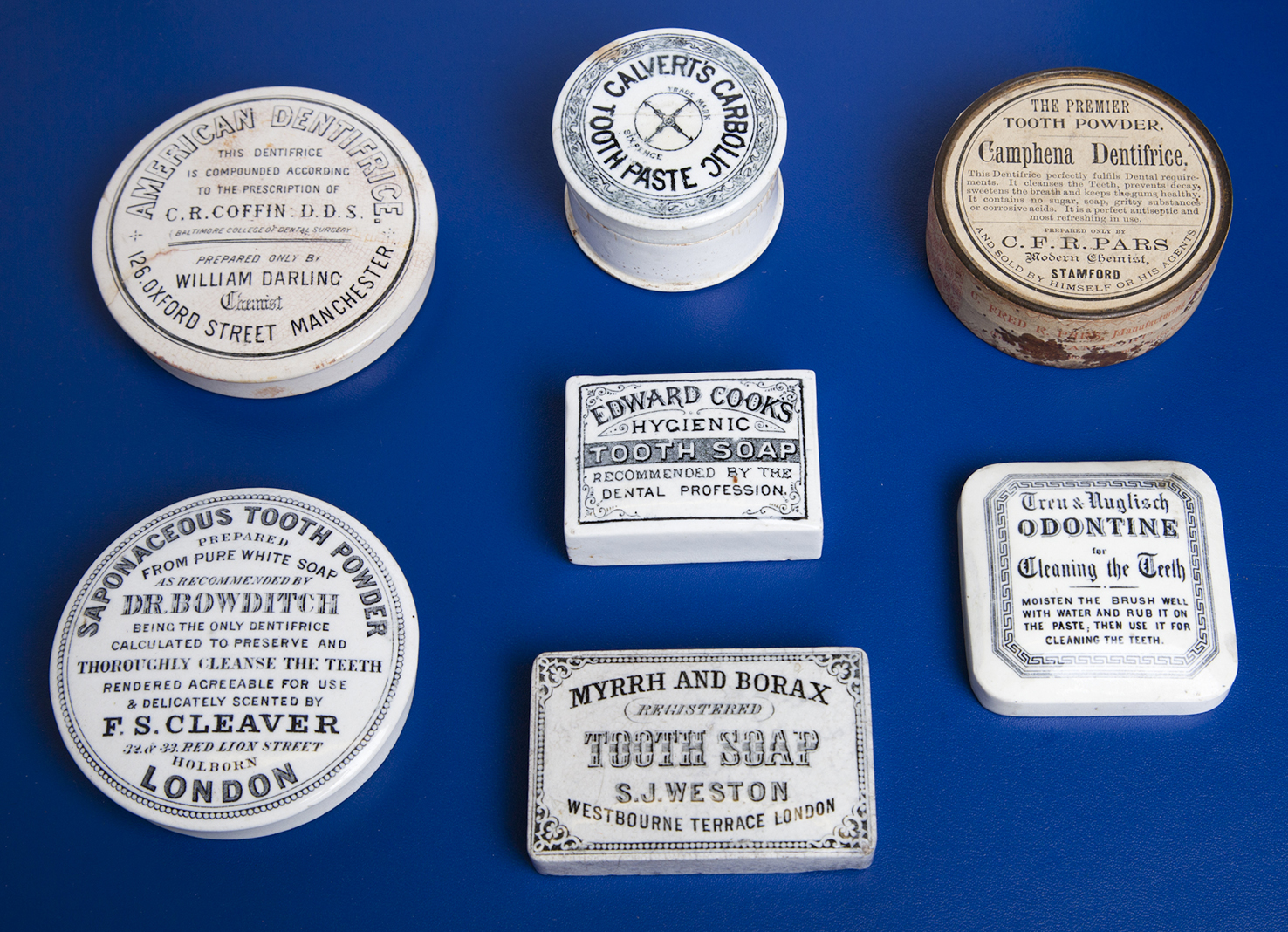