Readers of Bay will be familiar with its excellent articles on books, history, stately homes and waterborne activities: rowing trips offered by Row The Thames, part of Row England Limited offer elements of all four!

A five-day trip journeys from the river’s source at Lechlade, Gloucestershire, to Oxford, with a seven-day trip starting at Oxford and ending at Runnymede, just west of London.

They are ideal for anyone who has taken walking or cycling holidays and have proven popular with the active retired, although they are suited to anyone – young or not-so-young – with interest in the above fields.

Trips are taken by groups of four and have an emphasis on culture and heritage rather than extensive rowing. Participants should be able to undertake four-to-six hours of walking-level exercise daily. When afloat, two people skiff and one steers while the fourth is free to relax – which could mean reading aloud from the texts inspired by the passing scenery. 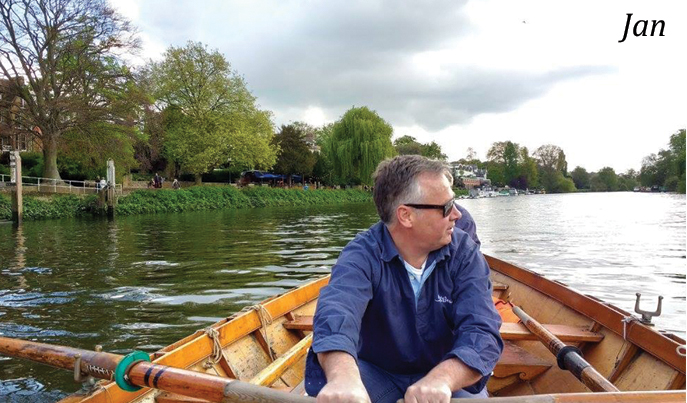 To make my research of the seven-day trip manageable, I meet Skipper Jan Holloway (left) at Richmond.

My arriving slightly early gives me the chance to mosey to the river to catch its mid-afternoon mellowness.

Jan hands me information on writing relating to different locations, and when later reading Wordsworth’s Lines written near Richmond, its opening words of, “Glide gently, thus for ever glide, O Thames!” ring true. 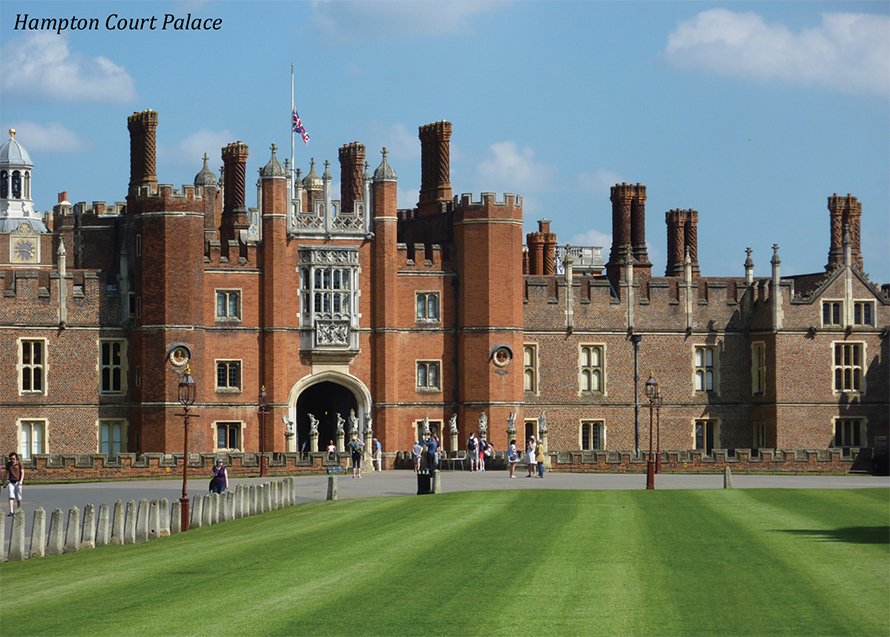 We head off on four wheels to Hampton Court Palace (right), where the Union Flag flies at half-mast following the Manchester Arena atrocity (I had earlier taken part in a minute’s silence at Victoria Station.)

Jan explains how rowers often start the trip in Oxford keen to tick off such major attractions, but as the journey progresses they find still greater interest in charming riverside accommodation or quirky, little-known facts delighting dinner party guests for decades.

The palace lies beyond the end of the trip, but Henry VIII’s des res can still be visited by minibus if time permits. 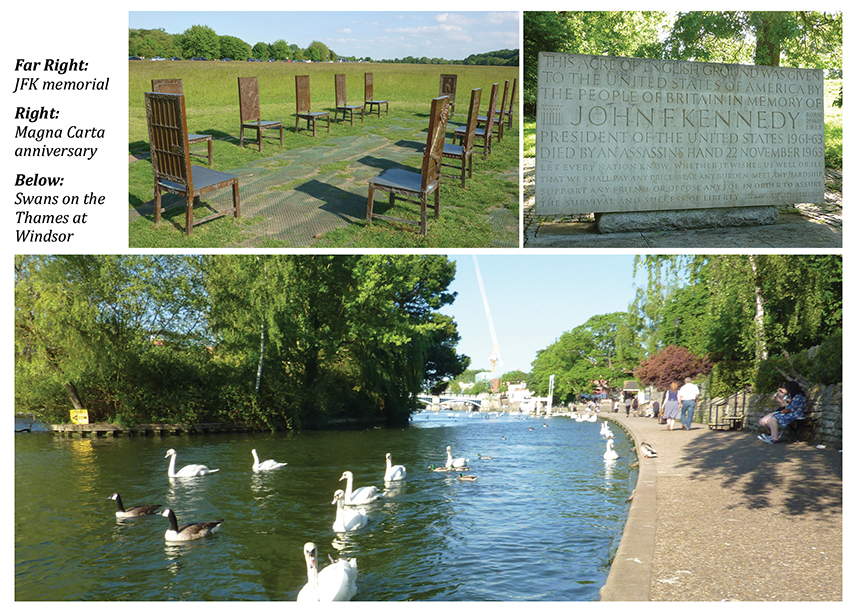 Back in the car, we continue our westward journey via road, picking up Old Father Thames at the birthplace of democracy – Runnymede.

It was here on June 15 1215 Magna Carta was signed by King John. To anyone uninformed, this is merely a meadow, albeit one with some paths mown through it, but to students of law and English history this is a powerful pilgrimage.

Today, an art installation of 12 chairs celebrates Magna Carta’s 800th anniversary but in the woodland beyond lies something even more astonishing.

Here, an acre of land was given to the US following John F Kennedy’s 1963 assassination, and as I climb the steps to his memorial, I am walking on American soil.

The nearest person is hundreds of yards away, so I have a moment of quiet contemplation, thinking of the president’s life – the centenary of his birth is three days away.

Intriguingly, Jan has been here around a dozen times but says he has never seen it busy. Rudyard Kipling’s Runnymede poem adorns a café here.

Leaving Camelot behind, we journey to a British Royal Family residence, parking up where The Thames is overlooked by Windsor Castle.

The towpath bustles with tourists, a bevy of swans (City fans should get numerous photo opportunities) and a gaggle of geese, making for a colourful spectacle.

Jan is quick to point out how, here, as elsewhere, once on the river, dry land-disturbance is replaced by ambience afloat.

Over a pint, while awaiting my train back to London, Jan explains, very briefly, what the trip entails in its earlier days.

It starts in Godstow, on Oxford’s outskirts, with a picnic on the lawn where Charles Dodgson, better known as Lewis Carroll, first told the Alice’s Adventures in Wonderland story to Alice Liddell and sisters. John Betjeman also wrote on Godstow.

Day one takes in Radley and ends in Abingdon, while day two passes through Jan’s favourite spot, undulating scenery known as the Goring Gap (a break between the Chilterns and the Berkshire Downs) and passes through Dorchester, Wallingford, Goring and Streatly.

On day three, rowers pass through Pangbourne to Mapledurham, where its Elizabethan House inspired The Wind in the Willows’ Toad Hall.

Later attractions include Henley-on-Thames, with its River & Rowing Museum housing a permanent Wind in the Willows exhibition and Marlow, where Mary Shelley wrote, in part, Frankenstein, before rowers arrive at Windsor and continue on to Runnymede.

Logistics are smooth, with trippers transported from boat to accommodation at the start and end of the day via a minibus following the route.

My pint downed, I head off to travel by rail, but my heart hankers for a river journey…