Bay’s GIG REVIEWER SIMON FRY CAUGHT A PERFORMANCE BY A YOUNG MUSICIAN WHOSE RECORD BRAZIL HAS BEEN LAUDED BY BBC NEWS AS ‘AN EXTRAORDINARILY MATURE SONG FOR A 16 YEAR-OLD SONGWRITER’ AND MATT WILKINSON OF NME CALLED IT ‘ONE OF THE BEST SONGS’ OF 2015. MAYBE HE IS ONE TO WATCH

Declan McKenna – A boy most likely to

Declan McKenna might be the most exciting young prospect in British music right now.

The 18-year-old singer-songwriter won the Glastonbury Festival’s Emerging Talent competition in 2015 and has since performed on Jools Holland’s Later… and at Austin, Texas’s South by Southwest Festival.

With his first album due to drop in July and with appearances at Glastonbury, Lollapalooza and Reading/Leeds due later in 2017, the crowd at Bristol’s Thekla – a music venue on a boat – is expectant.

He does not disappoint, Declan and musicians taking the stage promptly at nine o’clock. For many in the audience this is, literally, a school night, with at least two sets of dads-and-daughters proving his pan-generational appeal.

His resemblance – physically and musically – to Arctic Monkeys frontman Alex Turner is uncanny, but his shooting a confetti cannon before the gig begins confirms, rock star credentials or not, he doesn’t take himself remotely seriously.

He might, however, wish to up his homework; his set starts with a track called Isombard but no mention is made to the next-door restaurant being housed in what was once Isambard Kingdom Brunel’s private boathouse, or to Brunel’s SS Great Britain also being in Bristol’s docks. 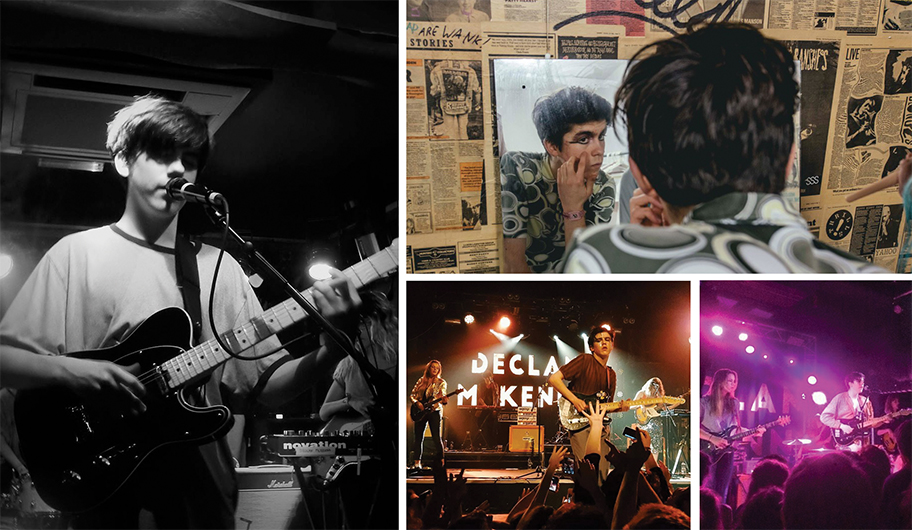 As Isombard ends a roar goes up, then the first six rows begin to sing word-for-word as Bethlehem begins.

“This is our first gig in ages,” Declan informs us, adding by way of confession, “We’re out of practise! Please be nice to Will, our new member.”

No such request for niceties is necessary, with the audience in adoration of their hero.

Basic prompts more word-perfect singing and extensive recording while in the break between Mind and Listen to Your Friends Declan implores those aged 18-25 to register to vote in the next seven days.

The seriousness over, Brew’s guitars start serenely then kick in emphatically en route to a triumphant, joyous, chord-changing chorus, the crowd bouncing boundlessly.

A mellow middle eight segues into something special – what sounds like Declan’s cover of Beyonce’s Hold Up, with its basis in Andy Williams’ Can’t Get Used to Losing You.

This moment is as unexpected as it is sublime, a startling accomplishment from one so young.

There’s more mass recording and crowd participation to The Kids Don’t Wanna Come Home before Why Do You Feel So Down? is introduced as, “Another one off the album.”

It receives mild applause, in contrast to the euphoria created by Paracetamol, with balloons released into the crowd ultimately finding their way back onstage. “You can keep these, I don’t need them” explains Declan. He high-fives the front row to excited screams.

The aforementioned album has the unlikely title, ‘What do you think about the car?’, taken from a home video in which Declan’s sister, addressing him as Dec, asks about the family’s new motor.

This recording starts Humongous, a melodic track bringing to mind Arctic Monkeys’ When the Sun Goes Down, during which Declan crowd-surfs over his fans.

Saving his most famous track for last, Brazil sees smartphones raised throughout the crowd, only for fans to put them away mid-song, realising being in the moment beats downloading later.

Declan McKenna has set the bar high already, and much wider recognition will follow.

His report is a glowing one: A* is born…