LAST MONTH, Bay’s PHOTOJOURNALIST LIZ BARRY AND HER PARTNER GARETH VISITED THE HISTORIC TOWN OF TEWKESBURY IN GLOUCESTERSHIRE TO CHECK OUT A COUNTRY HOUSE HOTEL, SPA AND A CASTLE 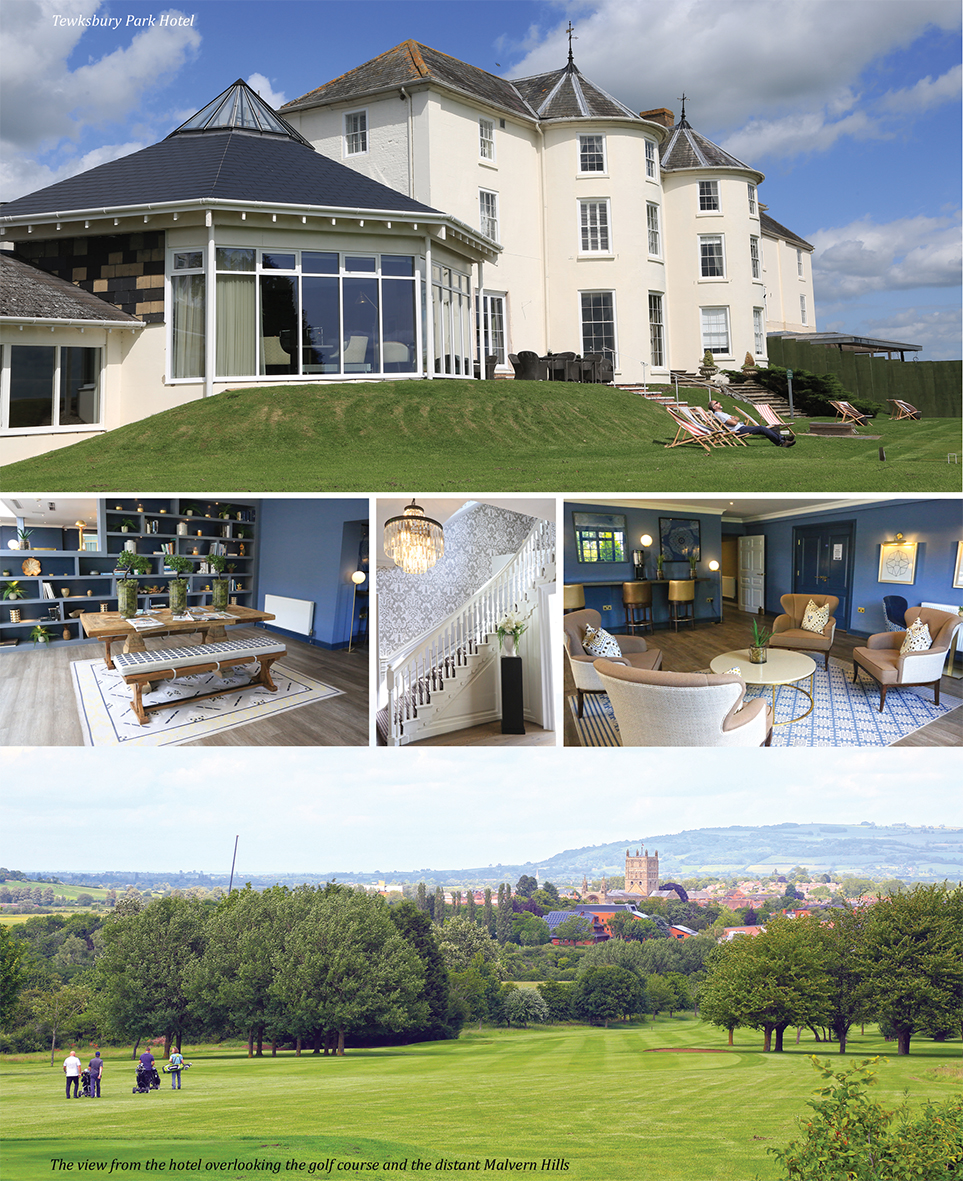 Within walking distance of the medieval town of Tewkesbury, on the site of the 1471 Battle of Tewkesbury, stands the country house hotel Tewkesbury Park. It sits at the end of a winding drive which transports you from the urban environment to the rural and into the heart of the picturesque Cotswolds countryside.

Set in 163 acres of parkland an 18 hole par 73 golf course, and a putt-ing green; and sporting a leisure club, spa and tennis courts, and it’s easy to see why you really don’t need to leave the hotel. However, if you want to explore the surrounding area, the towns of Cheltenham and Gloucester are a short drive away and it is on the doorstep of Winchcombe where you can visit Sudeley Castle and Gardens – my destination this weekend. 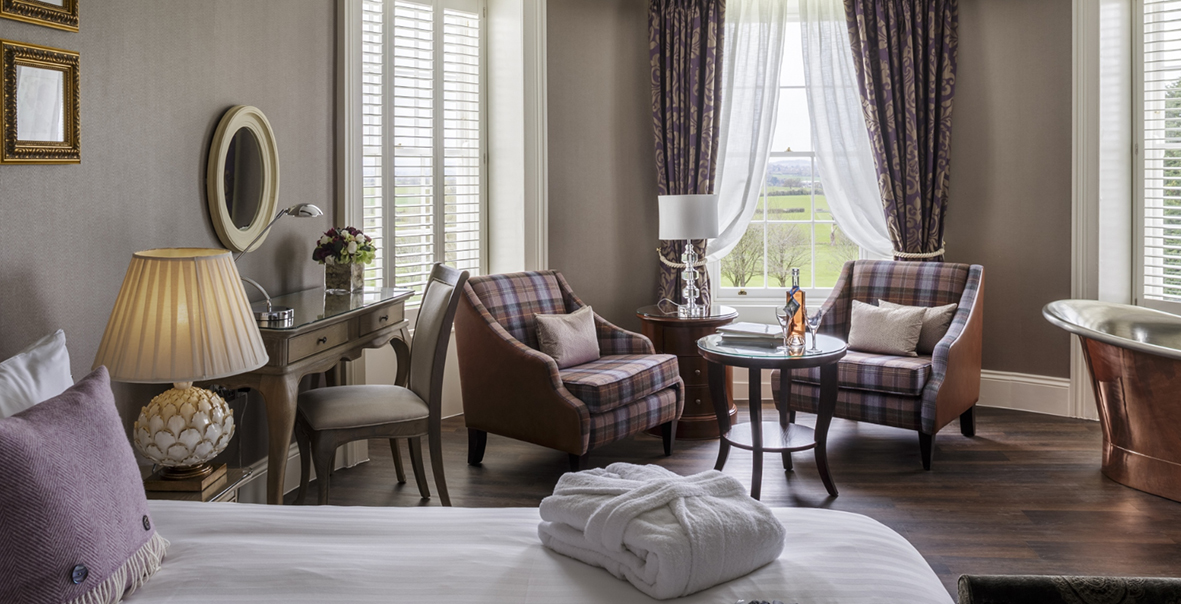 We swiftly checked in, and were shown to the Margaret of Anjou suite (pic right), one of nine suites within the 93 bedroom hotel. We were bowled over by the stunning views from the bay windows, which looked out across the golf course and beyond. In the distance I could see church steeples above rooftops, with a backdrop of the emerald green Malvern Hills. 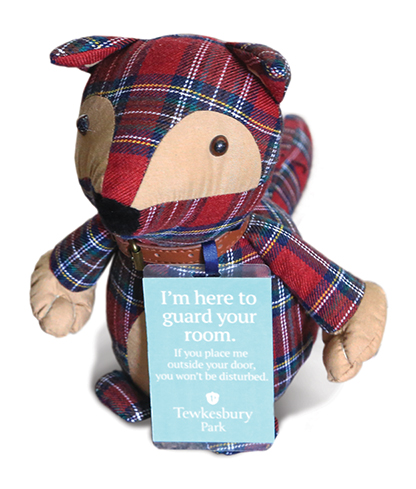 The hotel is luxurious and the attention to detail, meticulous. I loved the cute fox doorstop (pic left) that if left outside our door would signal that we didn’t want to be disturbed. 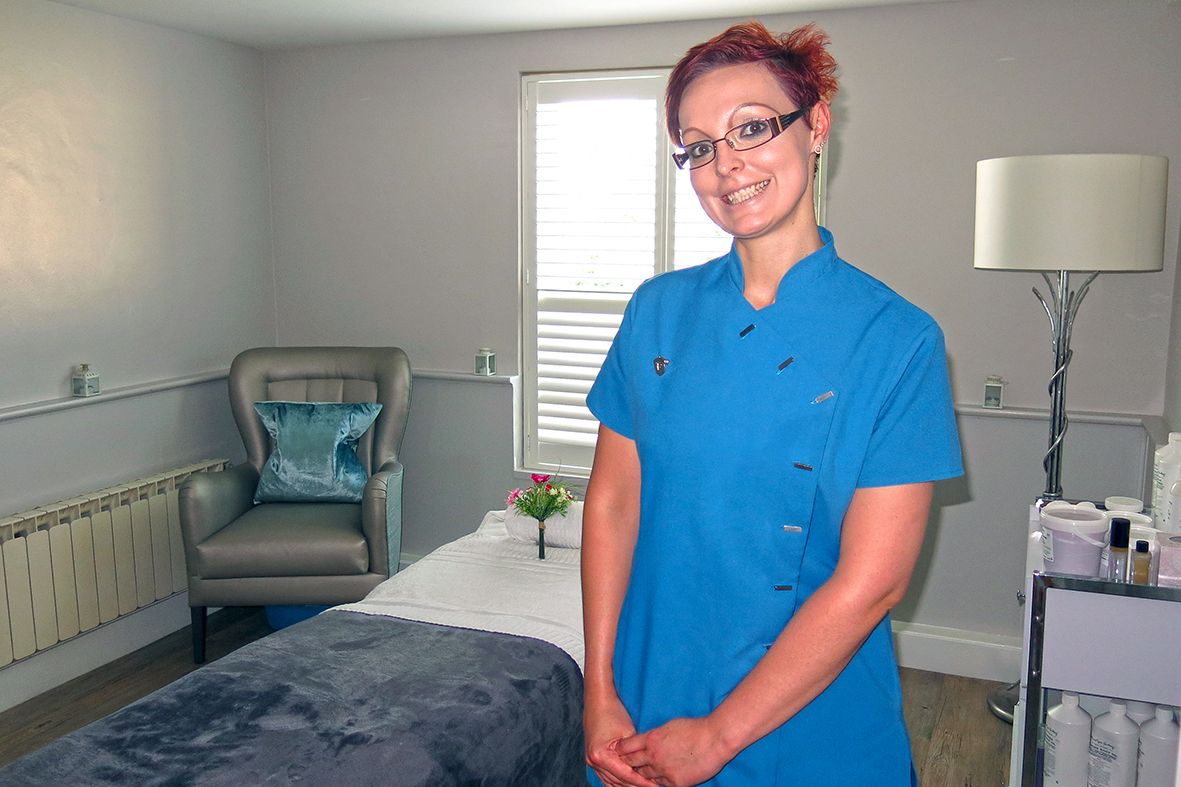 But I didn’t have time to hang about as I was booked into the spa for a massage with Wynsey (right), who had recently joined the team. For the next hour I relaxed while I was treated to a deeply nourishing coconut oil treatment, which left me smelling wonderfully tropical. 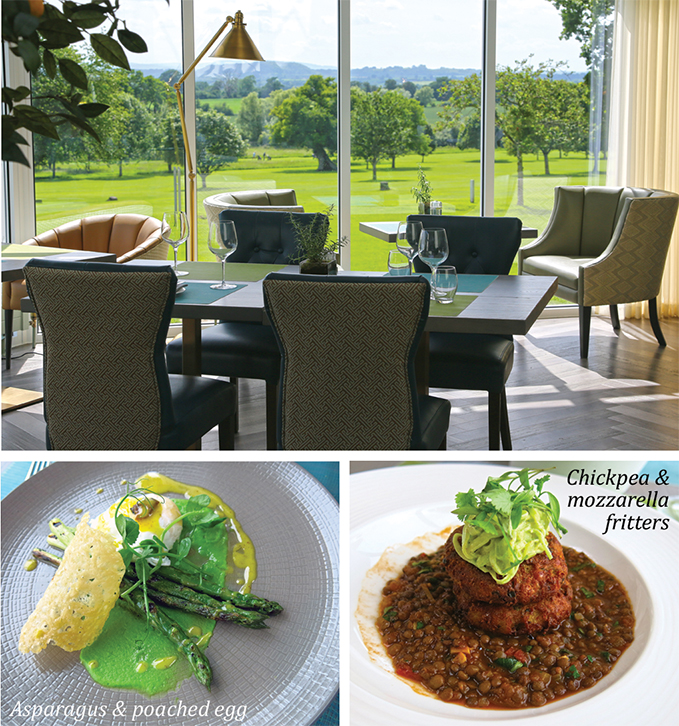 As it was a lovely sunny evening, we sat on the terrace overlook-ing the croquet lawn for a drink before dinner in the newly refurbished orangery. Once again our vista was the Malvern

Hills. Unfortunately clouds had rolled across the sky, but our waitress informed us that it’s not unusual for diners to be treated to a spectacular sunset. Joyce, a petite grey haired, octogenarian great grand-mother, was very attentive and a fount of knowledge, not only about the local area and attractions, but between courses she also kept us enthralled with stories about her 27 years’ working at the hotel.

As a vegetarian, I was pleasantly surprised to be handed a separate menu with a selection of dishes to choose from – I am used to be given Hobson’s choice! The food is home-cooked from locally sourced products by a team of chefs led by executive chef, Anuj Thakur, who joined the Tewkesbury Park team this year.

Our meals were delicious, from my starter of local asparagus and poach-ed egg salad (pic above far left), followed by the Asian fusion of chickpea and mozzarella fritters (above) and for my partner, Gloucester Old Spot Pork three ways. I really had no room for a dessert – but in the interest of re-search I made the sacrifice and ordered the Tewkesbury Park Choc-olate Bomb. Once the chocolate shell had been broken, it revealed a tangy passion fruit centre, which was a perfect foil for the salted caramel ice-cream and praline. 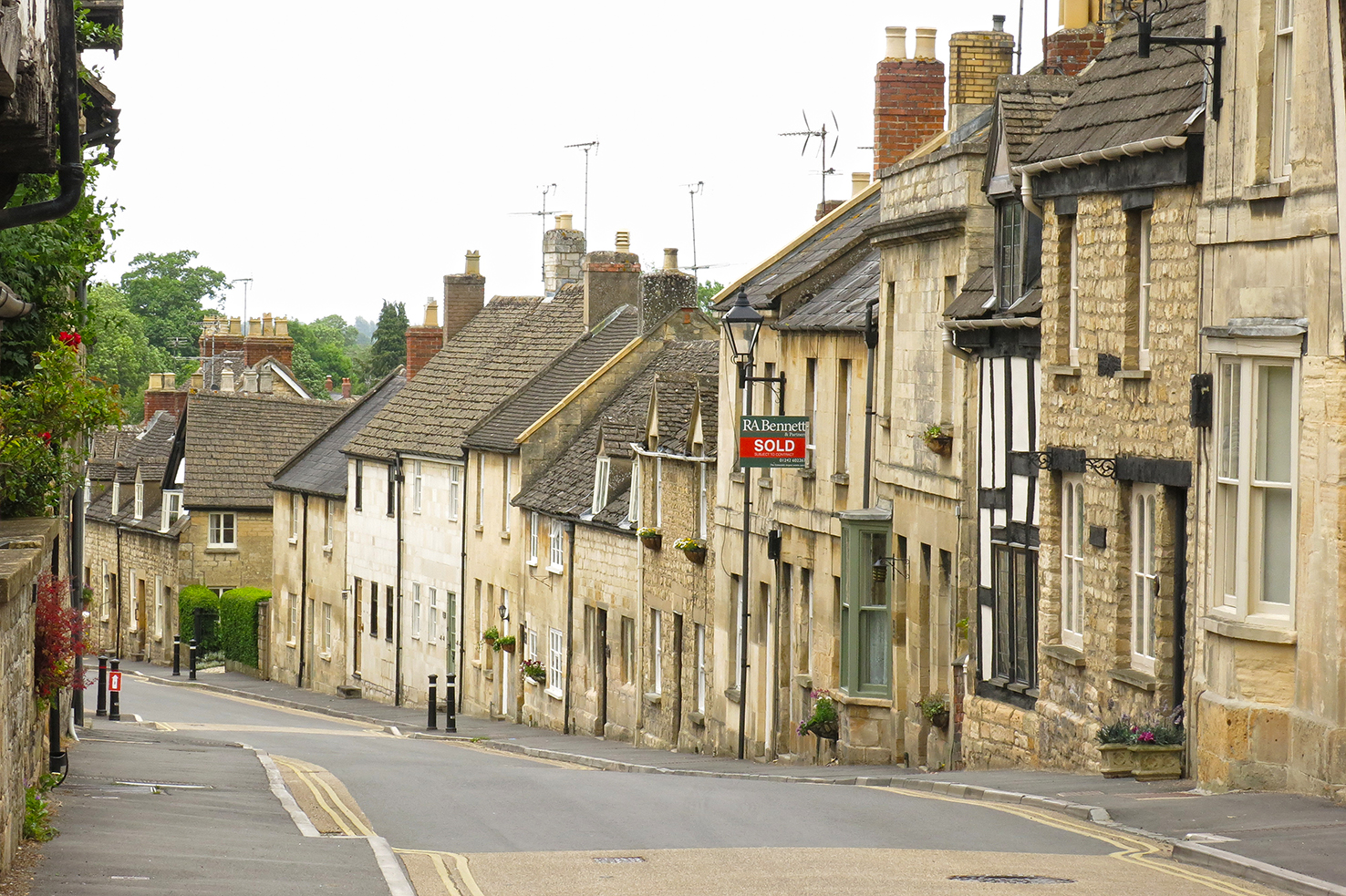 Next morning, I worked off some of the calories from the night before with a swim in the health club before my buffet breakfast. Fully fortified, we set off to explore the historic town of Winchcombe and Sudeley Castle, a half hour drive away. The Cotswold Way National Trail passes through Winchcombe and walkers can follow footpaths that have interesting sites en-route, from a Roman Villa to a Neolithic burial site. A stroll around the town is appealing as there are many antique shops, small museums to browse through and picturesque rows of old cottages down Vineyard Street (pic left) complete with roses around the doors. 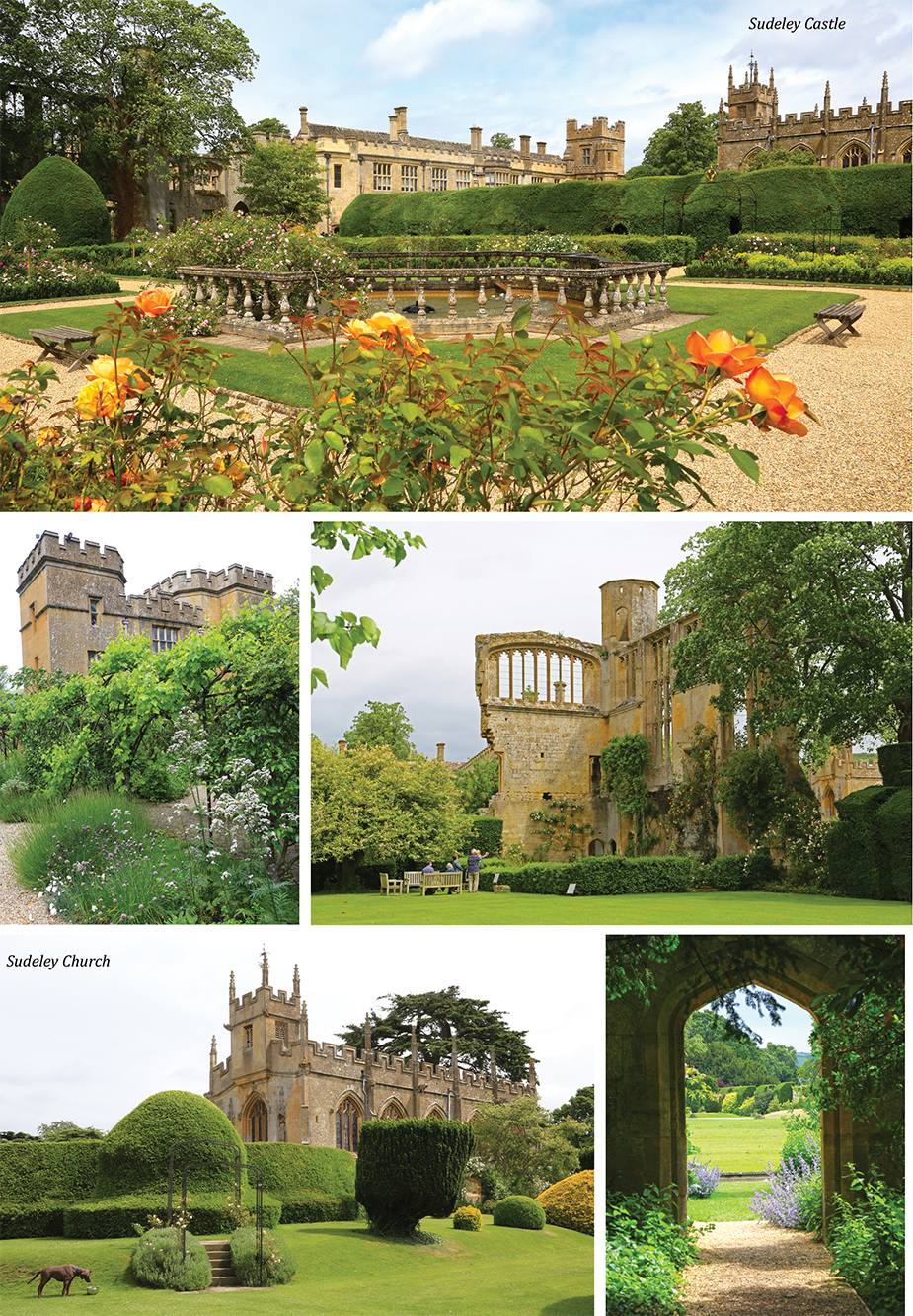 Sudeley Castle and Gardens (above) has over a thousand years of history to be explored, one significant period is that of the Tudors. After the Wars of the Roses the new monarch Henry VII granted Sudeley Castle to his uncle, Jasper Tudor, after his death in 1495 it reverted back to the monarchy as he left no heir. 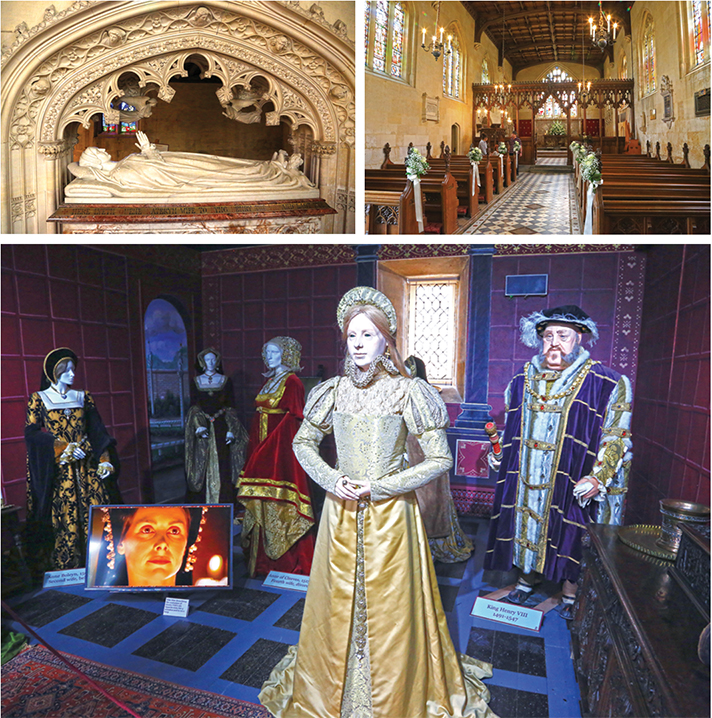 King Henry VIII ascended to the throne in 1509 and Sudeley Castle and Gardens became one of the royal residences. Following his death in 1547 it passed to his son, King Edward VI, who then granted the castle to his uncle, Thomas Seymour. Thomas married Katherine Parr (Henry VIII’s 6th wife and widow), and on 30th August 1548 aged 36, she gave birth to a daughter Mary. Seven days later she died and her remains are laid to rest in a marble tomb (left, top left) in the 15th century Church of St Mary (interior left top right), in the gardens. Sudeley is the only privately owned castle in England where a Queen is buried.

Fascinating exhibitions detailing this turbulent era can be seen throughout the castle, the West Wing houses mannequins from Dr David Starkey’s TV series ‘The Six Wives of Henry VIII ‘(left). Also open to visitors are some of the rooms used by the present owner Elizabeth, Lady Ashcombe. Family photos on display indicate royal connections to this day.

In the garden, yew trees edge the paths like lines of soldiers stand-ing to attention. In all there are ten award winning gardens, as well as a pond stocked with koi carp that poke their heads through the water-lily beds. Sudeley also houses Europe’s largest private collection of rare breed pheasants from around the world, combining a breeding and conservation programme.

The weekend of the 8th and 9th of July 2017 sees thousands of re-enactors, entertainers and traders from all over Europe gathering in Tewkesbury for the annual Mediaeval re-enactment of the Battle of Tewkesbury.

Tewkesbury is less than two hours drive from Swansea.