It runs until 13 August 2017 at the Swansea Museum and is a FREE exhibition.

The project is inspired by a collection of finds made by a local metal detectorist on Swansea Bay, which has also been acquired for the museum by Saving Treasures. 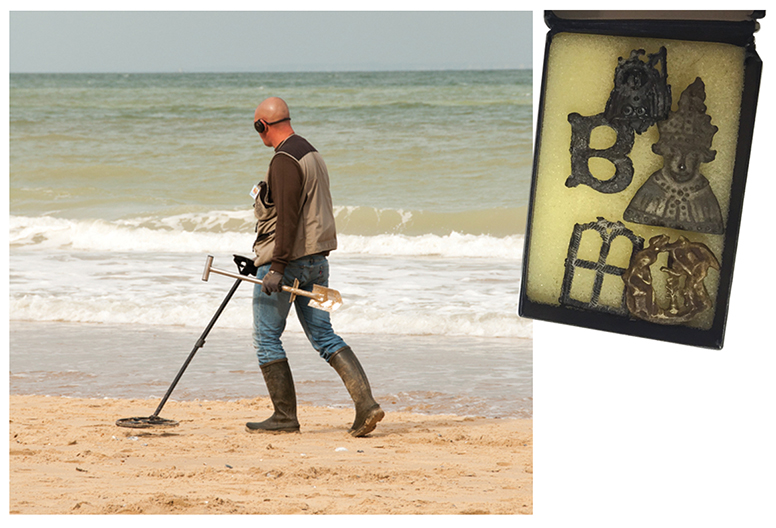 It includes some mysterious items, such as a Bronze Age tool with a curved blade which has had archaeologists scratching their heads. Ideas about its purpose range from opening shellfish to scraping seaweed off nets or rocks, or carving bowls. Among the other items found on the Bay are a number of medieval pilgrim badges, including one brought back from the important shrine of Thomas Becket at Canterbury. Pilgrim badges are usually made of lead or pewter and were often bought at shrines as a souvenir and worn on the pilgrim’s hat or cloak.

It is thought that those found in Swansea Bay were probably thrown into the sea by pilgrims returning to south Wales by boat as a thanks offering for their safe return. It seems like a curiously pagan thing for a medieval Christian to do, but it’s similar to the modern practice of throwing coins in wells, which is itself a survival of an ancient religious ritual.

The Archaeology of the Bay

The new collection is just a tiny fraction of the objects discovered on the Bay, which has a rich and varied – as well as sensitive – archaeology. This includes fragments of Bronze Age trackways and prehistoric forests, Roman brooches, ceramics, shipwrecks and the remains of World War Two bombs. 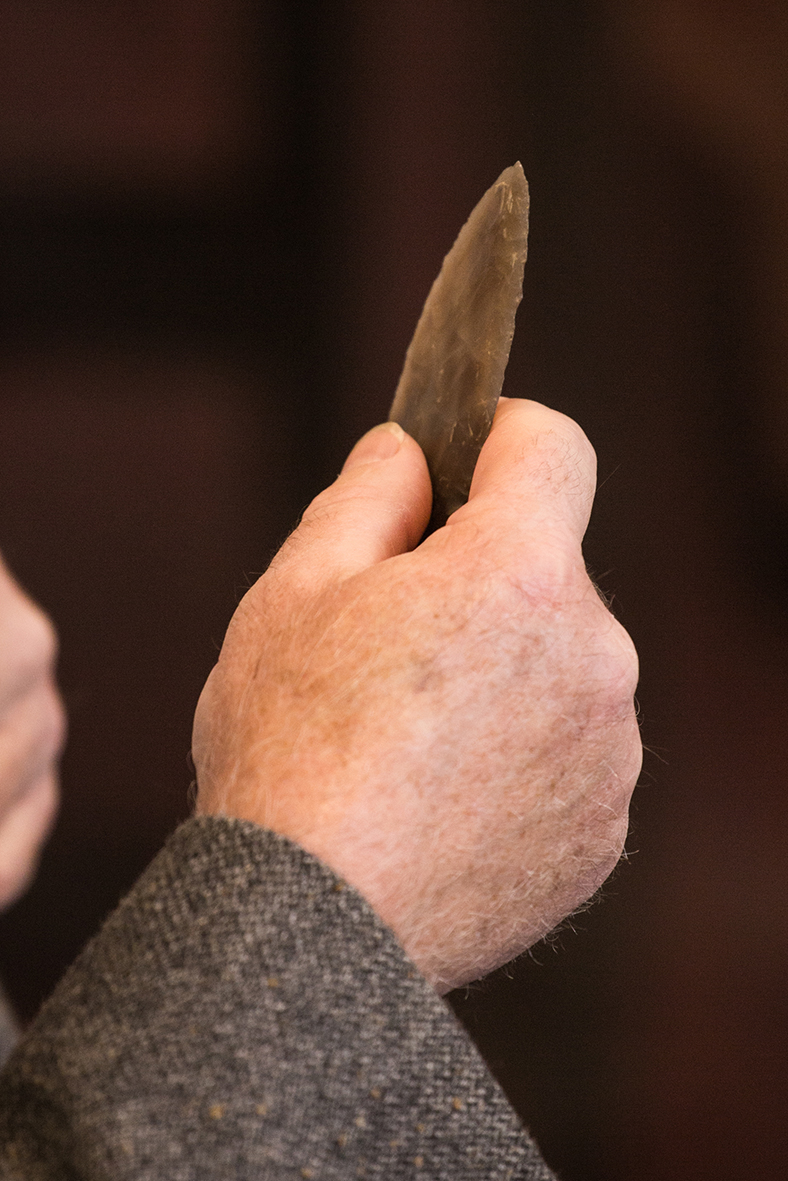 ONE ITEM HOWEVER, THAT YOU WON’T FIND ON DISPLAY AT ‘THE LOST TREASURES OF SWANSEA BAY’ IS AN ANCIENT FLINT DAGGER FOUND IN 1971

In 1971, Architecture student Paul Tambling was blissfully unaware of perhaps the biggest archaeological discovery that he would ever make in his lifetime and how finding the Swansea Bay dagger (as it is now known) would have an impact on his life.

While walking along Swansea beach Paul and his partner Angela noticed what appeared to be a piece of flint poking out of the sand. What they had discovered purely by chance, was in fact, a ‘4200 year old flint dagger’. 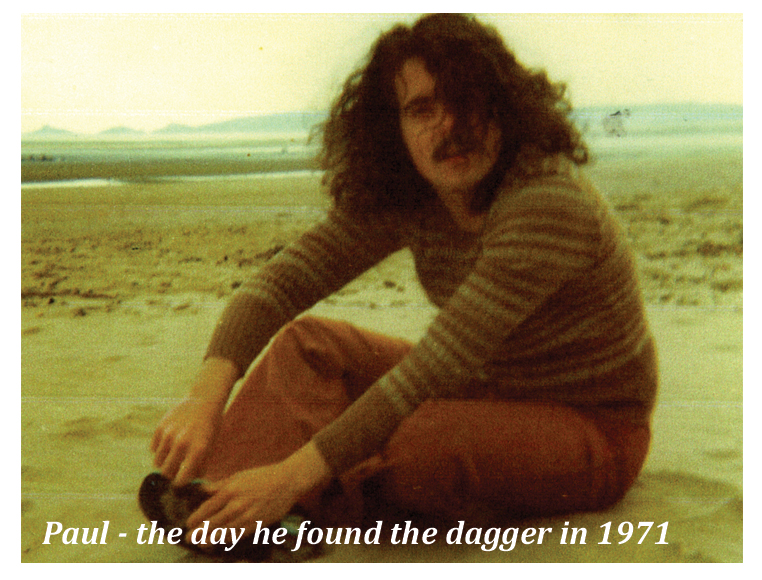 Paul told us: “When I picked up the dagger I was mystified as to how the dagger would have got there in the first place especially as flint does not naturally outcrop anywhere in Wales. Also, the flint was in an immaculate condition and did not appear to have been adversely affected by the action of the sea. I regard it as not only a great work of art but also a very skilled piece of workmanship and I find that it gives me great inspiration when I am designing buildings, where I am also constantly aiming to achieve such a level of craftsmanship”.

Almost 46 years later, and still in possession of the dagger the couple keep the item close to their hearts and believe it to be a unique symbol of their lasting relationship.

Paul said: “During and since my student days the flint has moved with me in an old envelope over six times and there were periods of my life when I actually thought that I had lost it. Nevertheless, since I recently discovered its huge historic importance, the flint is rarely out of my sight”

The flint has now been identified as a ‘Beaker Folk Dagger’ dating from the early Bronze Age, around 2250 to 2000 years BC which makes it around 4200 years old. In its day it carried great symbolic relevance as it would have accompanied high status burials to be with the deceased in the afterlife. There are a small number of other daggers that have been found in Wales but none are of the quality of the Swansea Bay dagger. The greatest number of daggers of this period have been found in South East England.

The Beaker Dagger has huge archaeological and symbolic value, but what does it mean to Paul and Angela as a family? 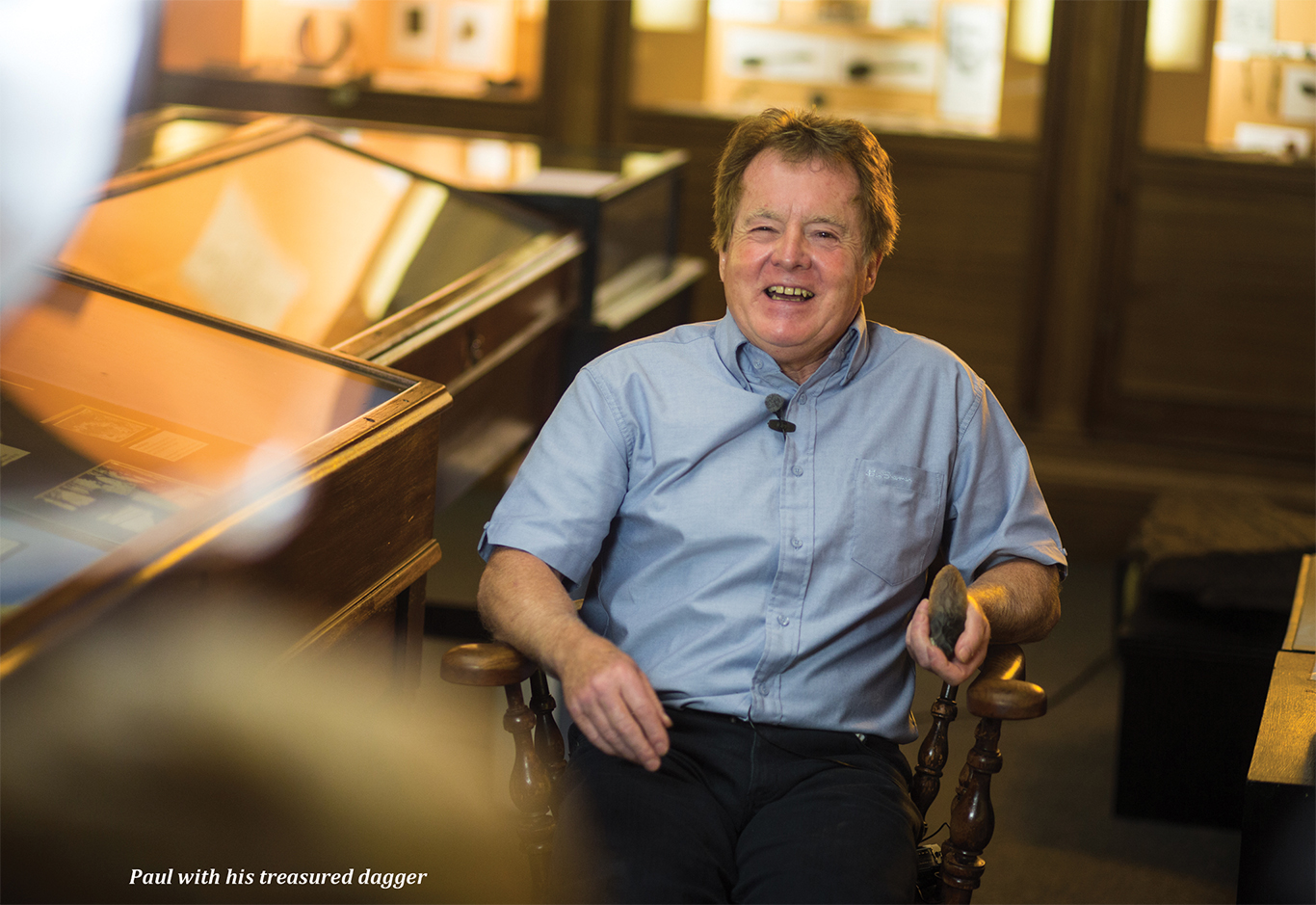 “This dagger represents the span of our married life. I found it 3 years before we got married and it’s an object that provides us with a special and lasting reminder of those wonderful weekends spent in Swansea all those years ago and binds us together. It was a magical time which just can’t be repeated.”

Paul and Angela Tambling, who run an architectural consultancy practice based in Brecon, had been unaware of the importance of the dagger but since its archaeological relevance has come to light they are constantly told by experts how lucky they were to find such an important object and in such an unexpected location. “I suppose luck is on my side” said Paul “I was lucky to marry Angela and lucky to find the dagger while with Angela.”

Paul told us that he instinctively knew that it was a marvellous object as soon as he picked it up but couldn’t work out whether it was a dagger or a spear head. Through the years Angela has been contin-ually saying to him “Why don’t you go and find out?” After much badgering Paul finally decided to visit Brecknock Museum only to find, when he got there, that it was closed for extensive restoration work.

In early 2016 the couple attended a demonstration of flint knapping in Cyfarthfa Museum, Merthyr Tydfil, given by Phil Harding of Time Team. It was here, after speaking with Phil that the true import-ance of the dagger became apparent and Phil advised that this object of archaeological significance should be recorded and the find reported to Amgueddfa Cymru – National Museum Wales. Soon after, the couple were contacted by, and subsequently met with, Mark Lodwick the Portable Antiquities Scheme Finds Co-ordinator for Wales at Amgueddfa Cymru.

Paul continued “I held this object in my hand reflecting on the fact that I had previously treated it with a kind of disrespect since 1971, storing it in an old envelope in the back of a drawer somewhere.”

Since meeting with Phil Harding and Mark Lodwick attention in the dagger has increased dramatically and this has prompted both Paul and Angela to take a greater interest in both archaeology and the Beaker Folk.

Currently there are no plans for a museum to acquire the Swansea Bay dagger as the item belongs to Paul and Angela but they have made every effort, with the help of Mark Lodwick, to make the importance of the dagger known to the public.