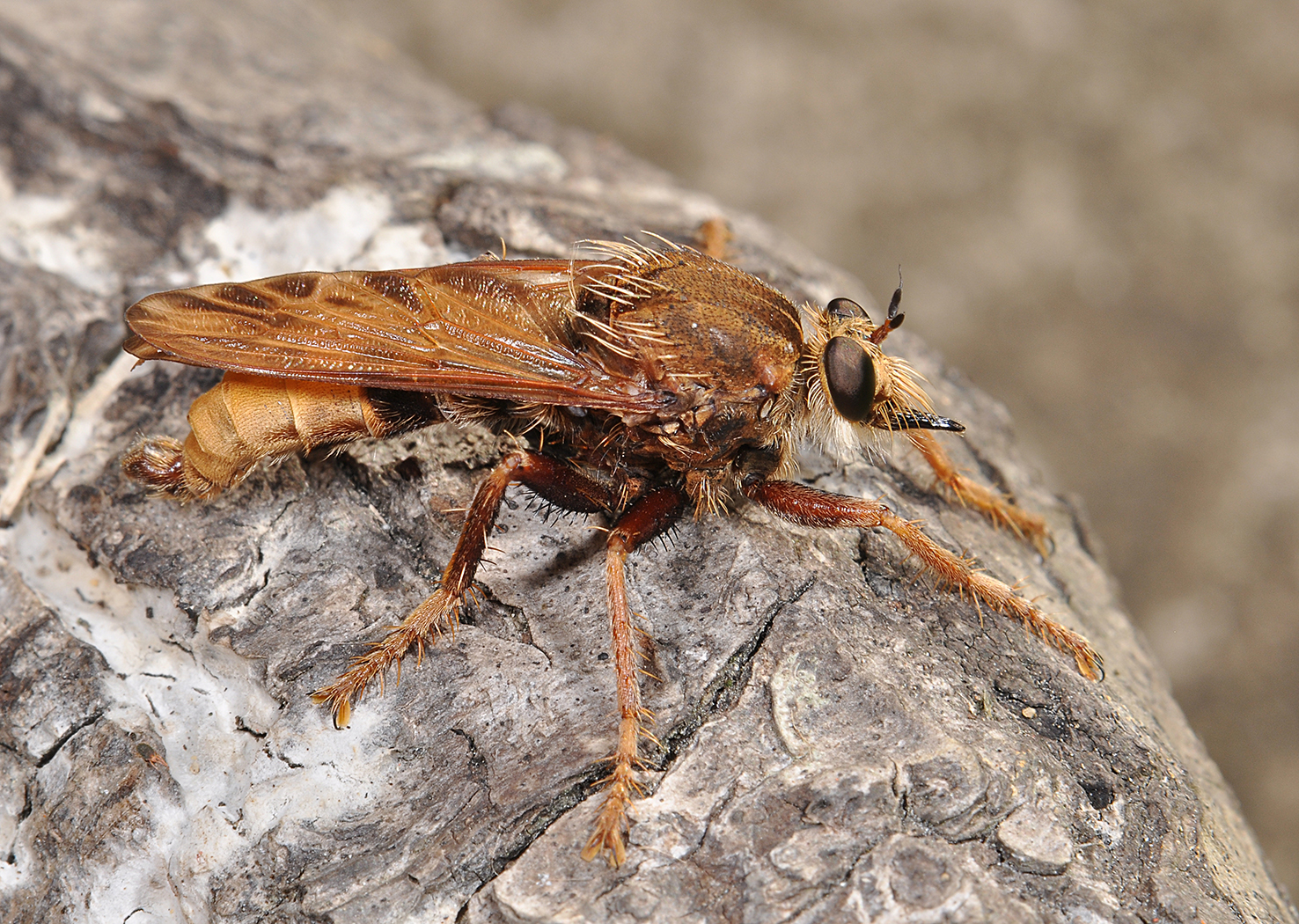 FLIES – their buzzing drives us crazy, they insist on walking all over our food and like to lay their eggs in very unsavoury places. Their relations the horseflies are out for our blood. It is fair to say that flies are not very popular, and they are certainly not often thought of as the tigers of the undergrowth, masters of stealth and speed capable of bringing down powerful prey bigger than themselves. But in the case of robberflies, this description would be entirely accurate.

We may be forgiven for not being familiar with robberflies because only 29 of the world’s 7000 robberfly species (Family Asilidae) can be found in Britain. Robberflies are partial to heat and sunshine, and as such only the hardiest species are able to survive in the British climate, with most being more prevalent in the south of the country. In the tropics, the largest robberfly species can reach body lengths of up to 6 cm and wing spans of 8 cm, and several of them have been reported to have attacked – and in some cases successfully overpowered – hummingbirds. Luckily, no vertebrates are on the menu of even the biggest British robberflies, but certainly no insect is safe, and sometimes even spiders are snatched out of their webs. 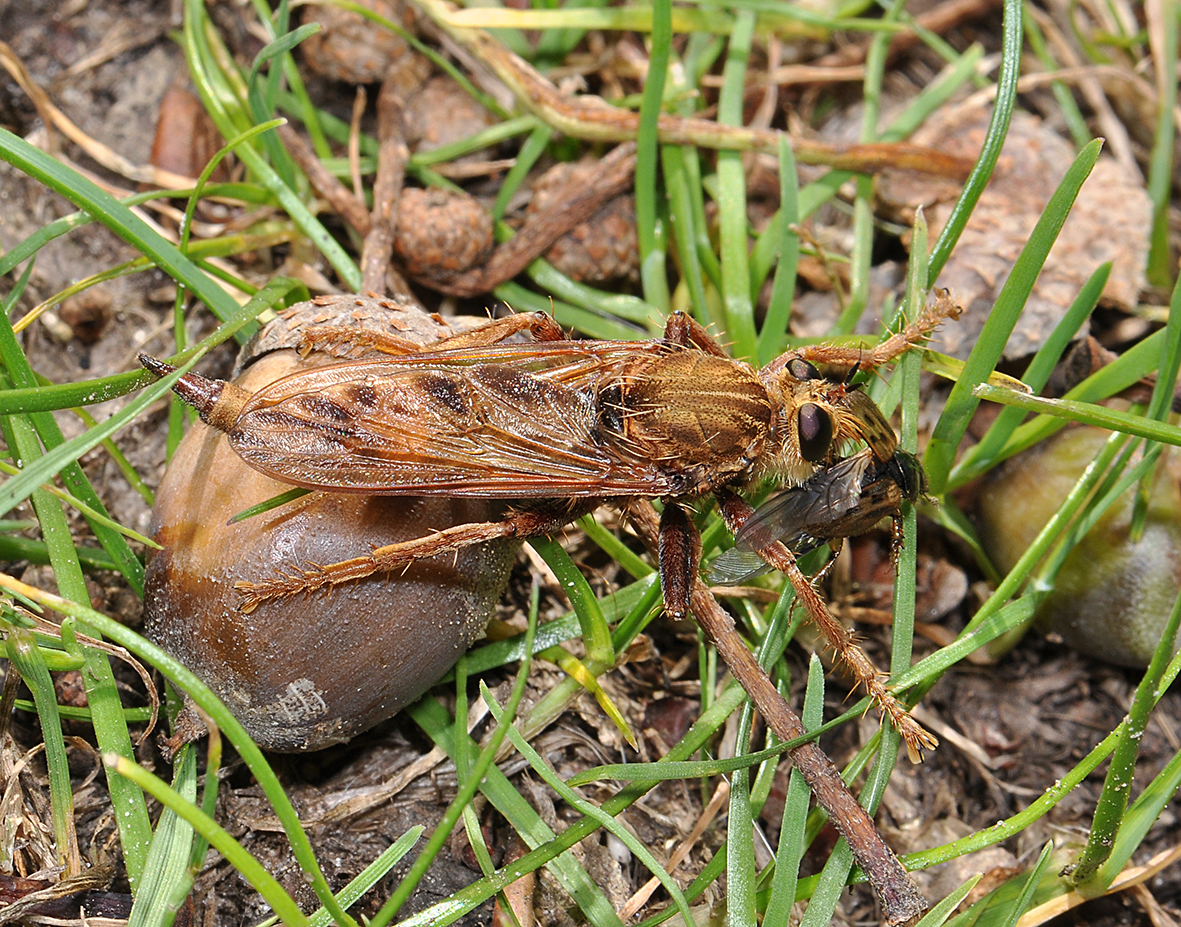 Most robberflies catch their prey when it is in flight, so wasps, bees, grasshoppers, butterflies, beetles and flies (even other robberflies) feature highly on their menus. The largest British species, the Hornet Robberfly (Asilus crabroniformis) (photos 1 & 2), can even bring down dragonflies which are considerably bigger than itself, not to mention fierce predators in their own right. This very large (up to 28 mm body length) – and unfortunately rare – species is unmistakeable in its orange tones, which very convincingly mimic the colours of a hornet. Despite its unusual colouration, the Hornet Robberfly is well camouflaged when it rests with its wings folded in its scrubby grassland habitat, where it often perches on dried dung, ambushing passing dung beetles. The female (photo 2) possesses a distinctive ovipositor with which it places its eggs deep inside cracks of dried dung (usually cow or 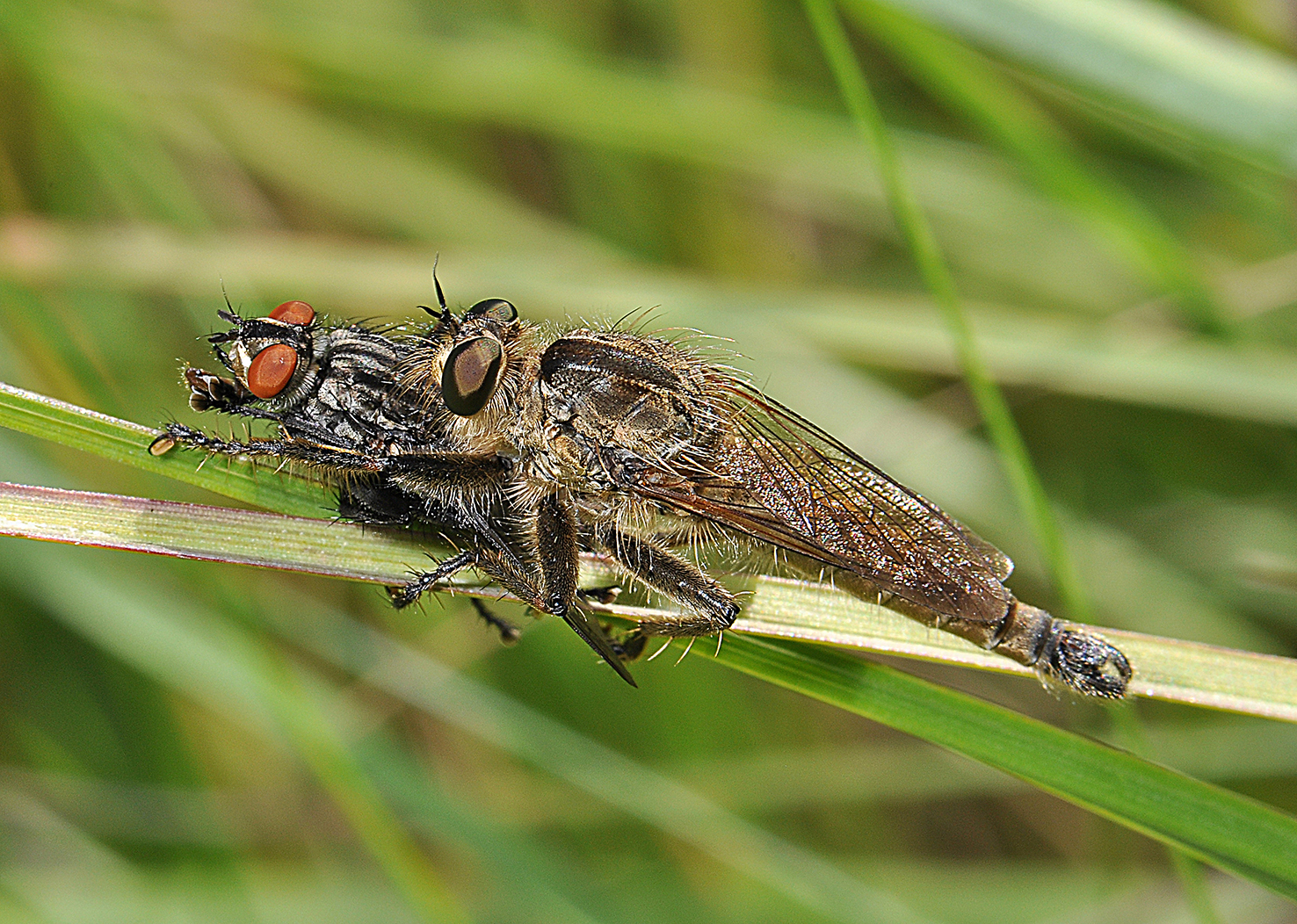 horse and occasionally rabbit, but never sheep). Very little is known about the Hornet Robberfly’s larval development, except that it takes place underground in association with dung beetle larvae, on which the robberfly larvae are thought to feed. 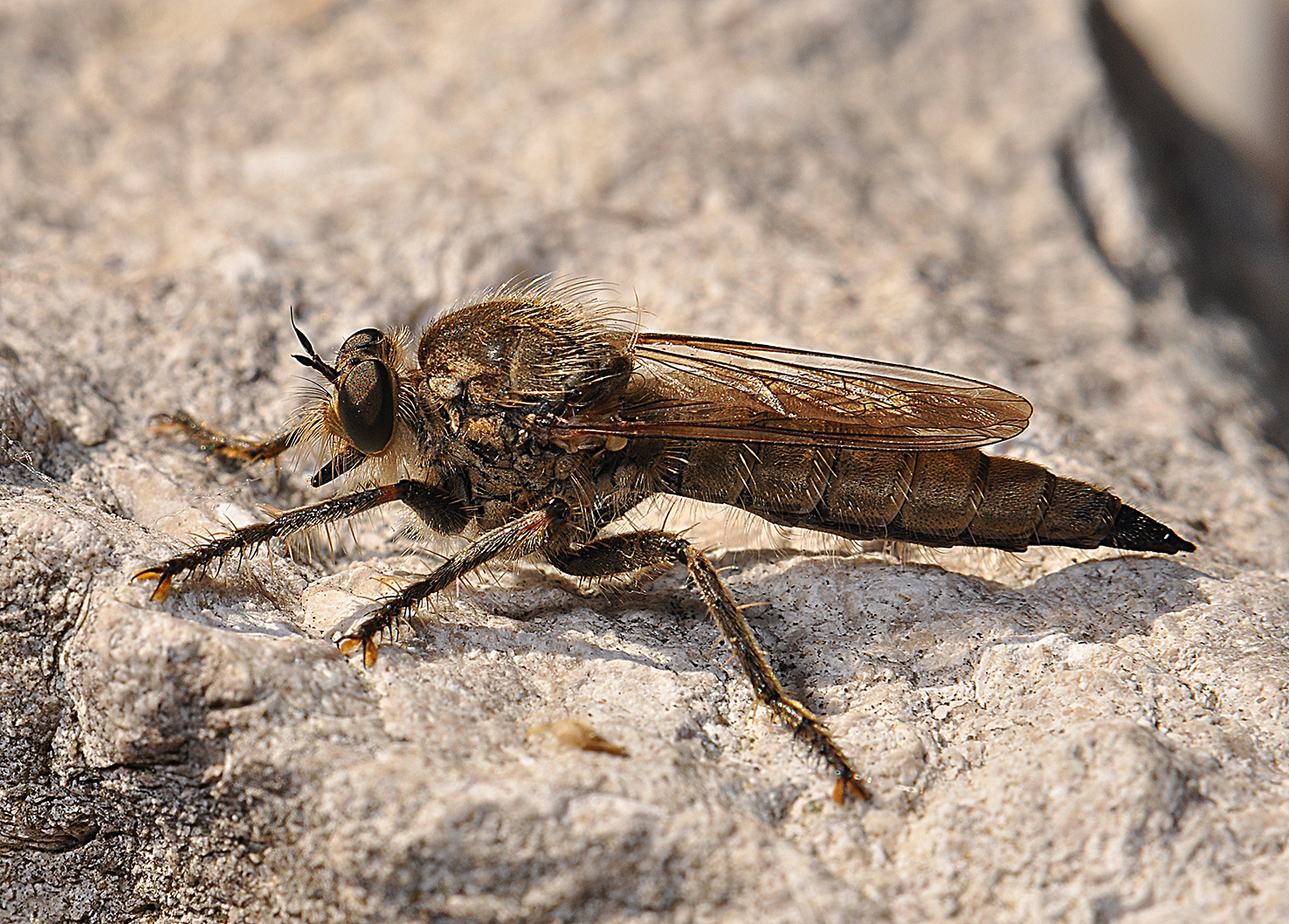 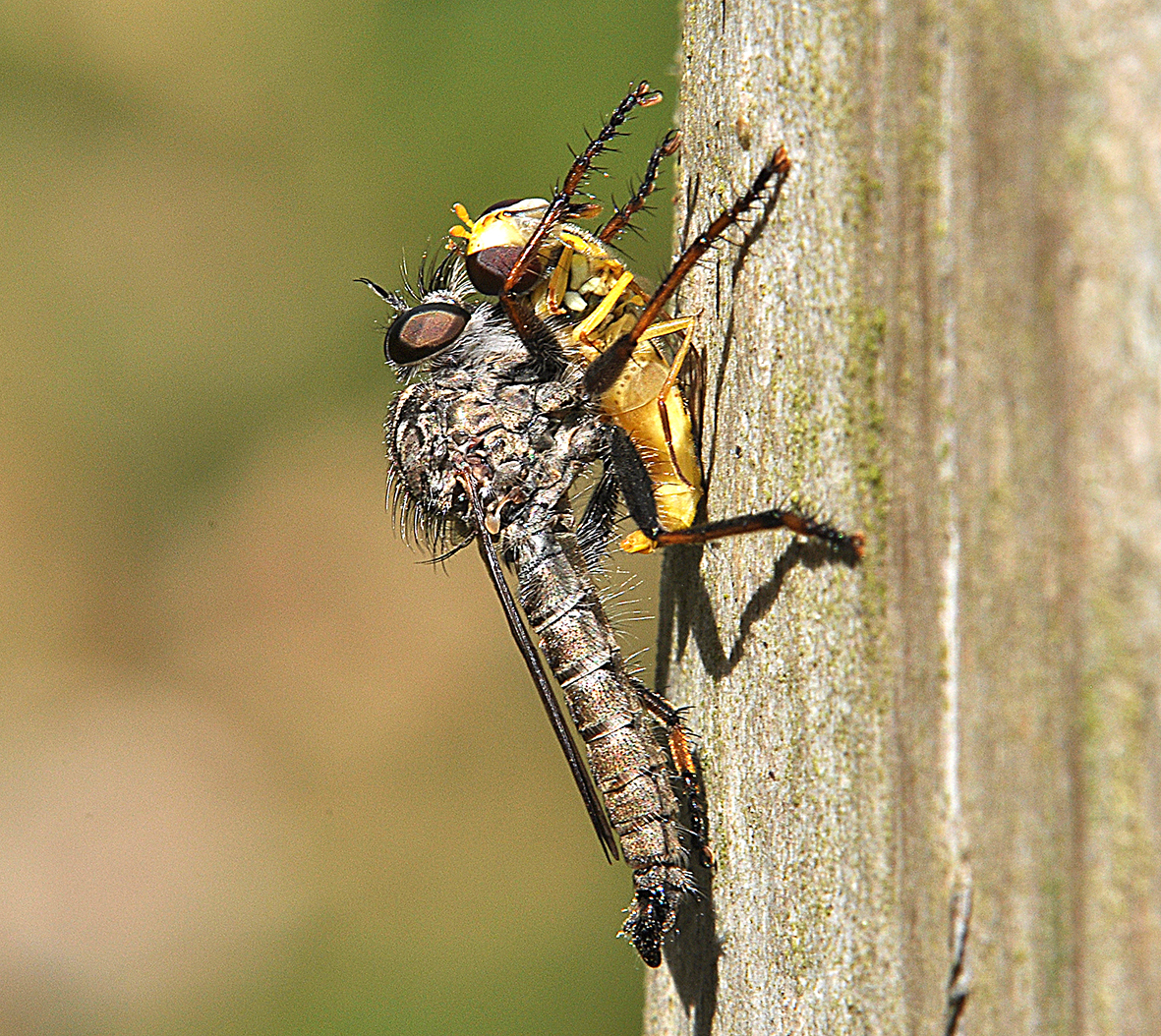 The British representatives of the slightly smaller genus Machimus, which include the rare Downland Robberfly (Machimus rusticus) (male photo 3 and female photo 4) and the more widespread Kite-tailed Robberfly (Machimus atricapillus) (photo 5), are very good representatives of the ‘typical robberfly’. They all clearly display the tell-tale gap between their prominent eyes which appears as a dent when looking at them face-on, the strong piercing-sucking mouthparts, and the distinctive moustache-like stiff bristles on their face (known as a ‘mystax’), which protect robberflies’ eyes from damage while they grapple with their victims. Once held firmly by a robberfly’s strong legs, a victim is quickly stabbed (often in the eyes or the neck where the cuticle is softer) and injected with a paralyzing agent to stop it from struggling as well as with digestive enzymes to liquify its body tissues. Depending on prey size, it takes a robberfly around 30 minutes to suck out a meal before discarding the empty cuticle. This is often a good time to sneak up on an individual for a closer look or a quick photograph. 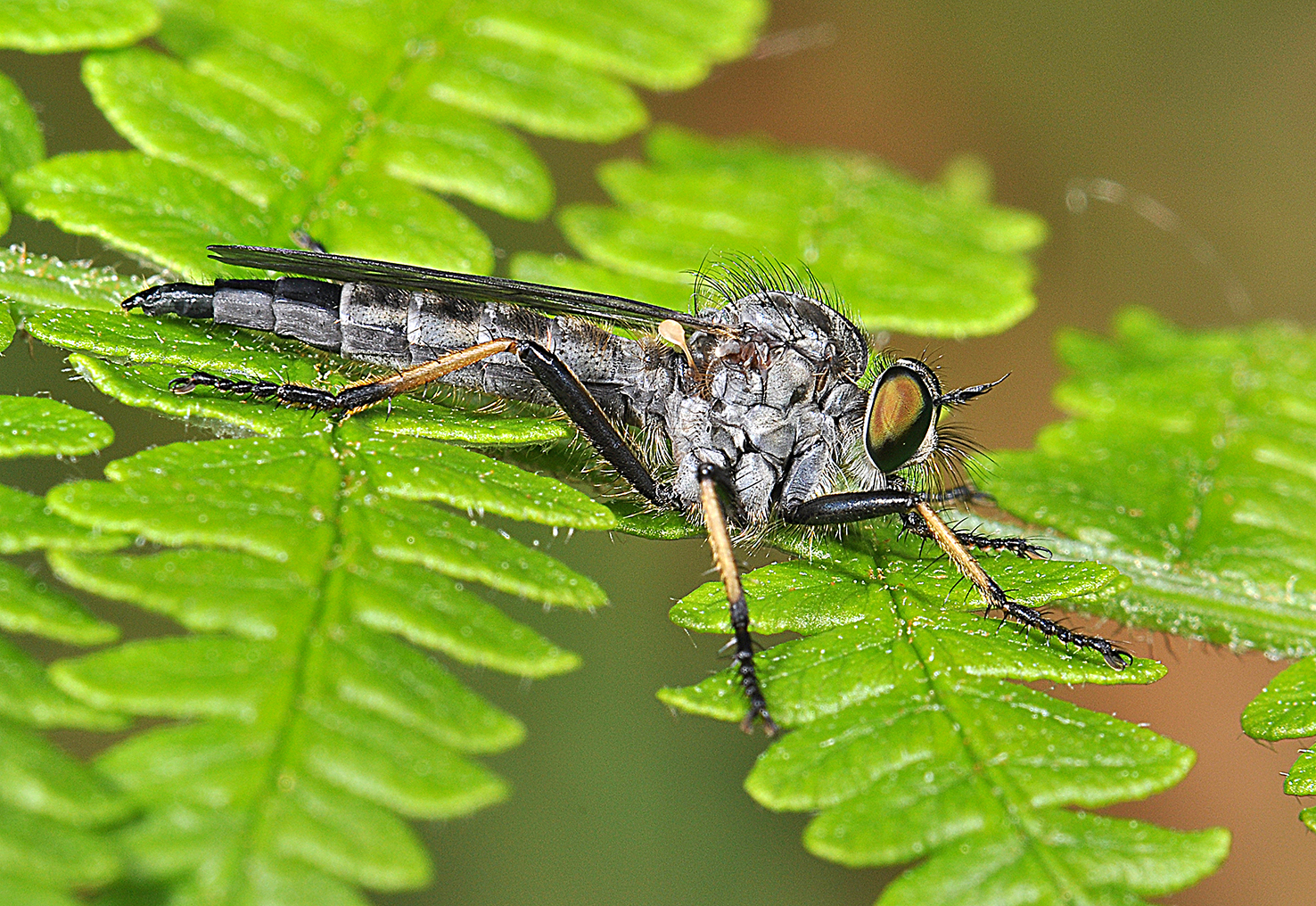 While many robberfly species live in open habitats such as grassland and dunes, some, such as the Common Awl Robberfly (Neoitamus cyanurus) (photo 6), inhabit woodlands where they can usually be found around clearings and along rides. In common with most other robberflies, little is known about this species’ larval development, except that it is found under moss and in woodland soil. It is thought that the larvae of most robberfly species are predatory and develop in soil, but few have been studied in detail. There is much still to be discovered about adult robberflies as well, particularly regarding various aspects of their behaviour. For example, some species have been shown to have surprisingly elaborate courtship rituals. 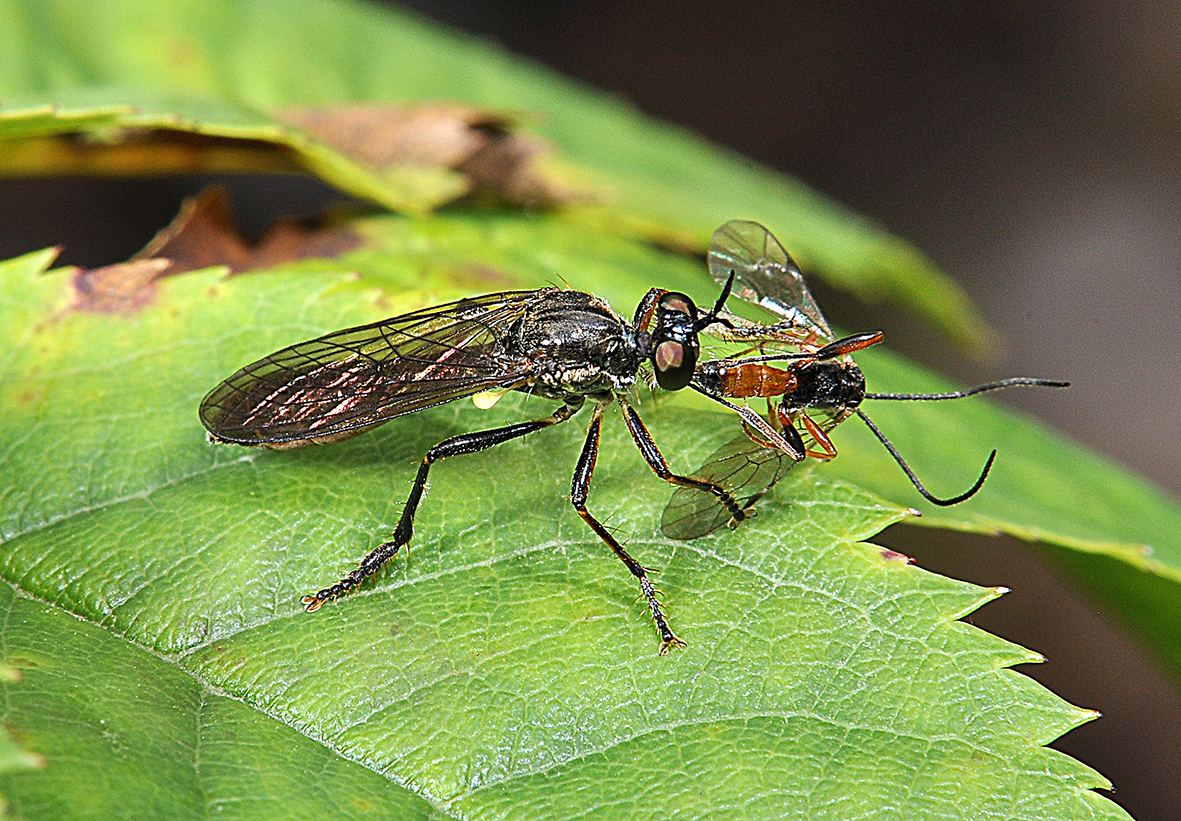 Not all robberflies are large and fierce-looking. Members of the genus Dioctria, including the Stripe-legged Robberfly (Dioctria baumhaueri) (photo 7), whose preferred prey are small ichneumonid wasps, tend to be rather delicate insects. The weak-flying Slender-striped Robberfly (Leptogaster cylindrica) (photo 8) is even more slightly built and feeds on tiny fare such as flying aphids. Unusually, Slender-striped Robberflies do not ambush prey from a perch like most robberflies do, but rather hunt while on the wing themselves, slowly flying along before suddenly darting off course to pursue their selected victim. 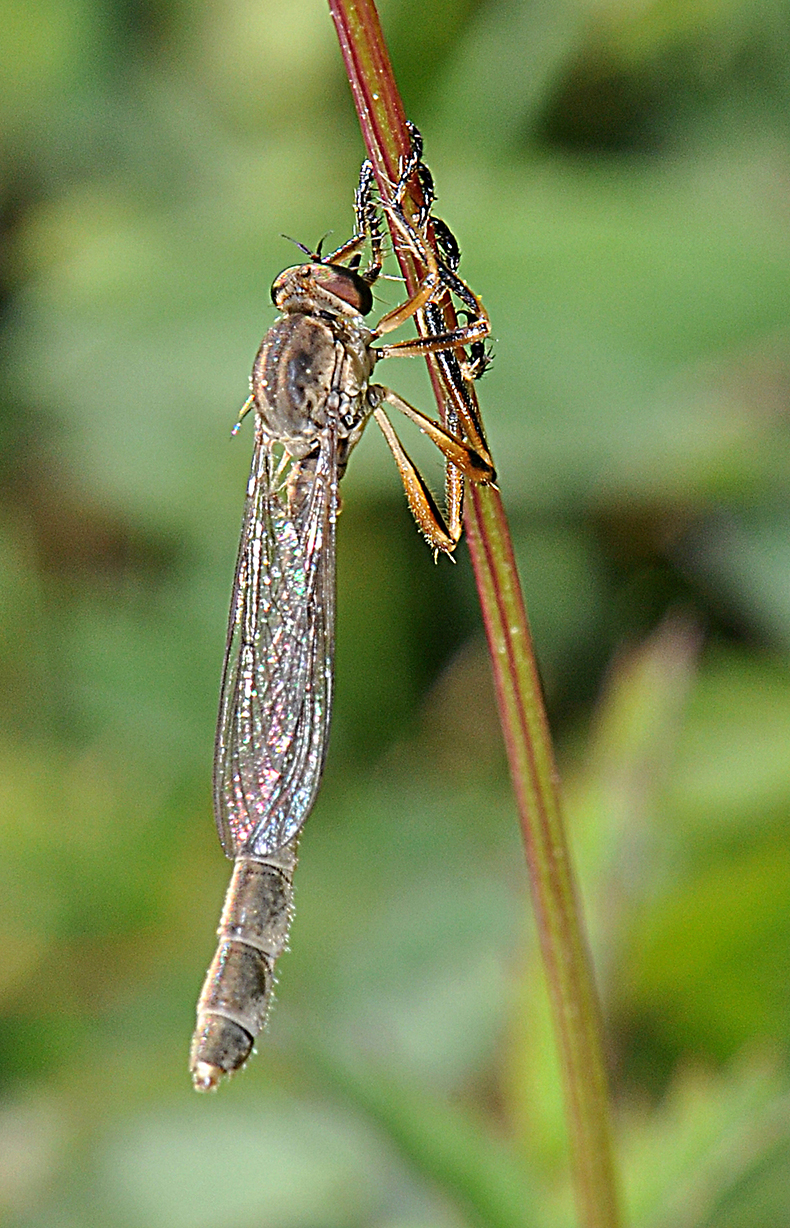 The Gower Peninsula and surrounding areas such as Crymlyn Bog and Kilvey Hill are rich in suitable robberfly habitats and many species (including the rare Asilus crabroniformis) are known to occur in the area, so that there are ample opportunities to observe – and hopefully learn more about – these ferocious little enigmas.