With wood that blunts chainsaws faster than that of any other tree, the ability to thrive even in heavy shade and immense powers of regeneration, the hornbeam used to be an important part of our lives for centuries, yet nowadays this charismatic tree has – quite undeservedly – become one of the least readily recognized of our native trees

Few trees would look more at home on a fantasy film set than a group of hornbeams in winter (photo 1). Their sinewy-looking short trunks topped with gnarled branches, set off by the pale coloured carpet of their dropped leaves, makes a perfect backdrop for knights and dragons. The vast crowns formed by older trees are no less magical (photo 2). The hornbeam’s talent for setting a scene has not gone unnoticed, and forests such as Epping Forest, one of the strongholds of hornbeam in England, are frequently used as filming locations. One of the best known scenes with Epping Forest hornbeam quietly featuring in the background is perhaps the Black Knight scene in Monty Python and the Holy Grail.

The fortunes of the Epping Forest hornbeams have changed quite dramatically over the past two centuries. Whereas today they are movie stars, just over 150 years ago they were still quite ruthlessly pollarded and coppiced for firewood and charcoal making. In fact, as recently as 1866, Epping Forest was at the centre of a 16 year lawsuit over commoners’ rights to take wood from the forest as fuel. Hornbeam wood, once seasoned, burns exceptionally well, and brightly enough to work by. This made it particularly popular as firewood. It also produces excellent charcoal and has been used for this purpose for hundreds of years. Hornbeam charcoal was used for iron smelting in the middle ages and hornbeam coppices were often maintained near smelting sites. The pollarded trees in photo 3, now over 150 years old, would still have been used for fuel production in their youth.

Hornbeams live for around 300 years and, if left to their own devices, grow into elegantly shaped trees around 25 metres in height (photo 4) before developing their spreading crowns of old age, given the room. They have evolved to be a very shade-tolerant species because they are often overtaken by taller-growing trees such as oaks, and find themselves having to make do with whatever light is left underneath their competitors.

Hornbeam wood was not only used for fuel, though. It is one of Britain’s hardest native woods (box wood being the other), and as such lends itself to applications where other woods would quickly fail. It was particularly important before the advent of cast iron. Over time, hornbeam wood has been used for such varied purposes as Roman chariots, ox yokes, wheel hubs, butchers’ blocks and cog wheels in mills. Hornbeam wood is notoriously hard to work with and quickly blunts tools, so other woods are generally used wherever exceptional durability is not essential. Today, hornbeam is still used for piano hammers, the base of handheld planers for woodworking, and occasionally hardwood flooring.

The hornbeam’s great powers of regeneration mean that it can easily be shaped and clipped. This made it a favourite with creators of 17th century formal gardens, where hornbeams (along with box and yew) were trimmed into all manner of fanciful shapes. Hornbeams also lend themselves to pleaching, where they are woven and trimmed into living walls and walkways. Pleached hornbeams can still be bought today, and can be very useful for providing a living, tall, narrow, vertical extension to an existing low wall to provide increased privacy. 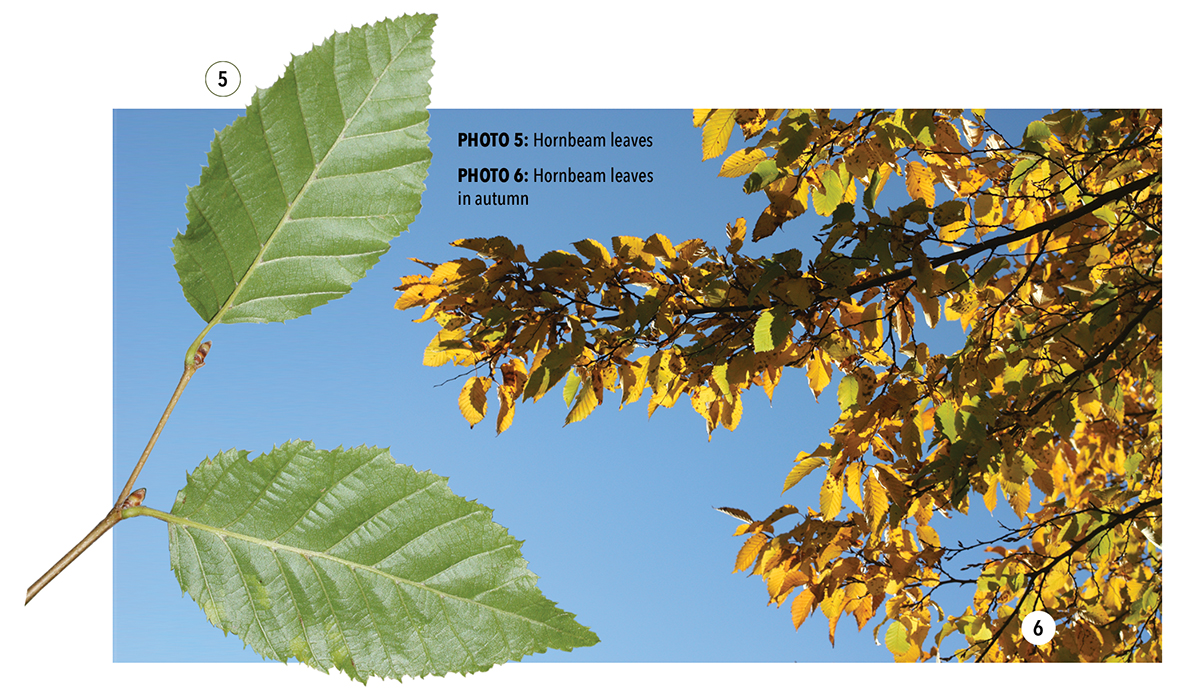 Hornbeams make excellent hedging trees in their own right, but they never managed a big-scale comeback after falling out of fashion when more informal gardens became popular during the 18th century. Especially when pruned into hedges, hornbeams can look very similar to beech, to which they are not related. Hornbeam leaves (photo 5) are smaller than the similarly shaped beech leaves, have serrated edges where those of beech are smooth, and maintain an overall slightly crinkled appearance as if they hadn’t quite finished unfolding, while beech leaves are completely flat. 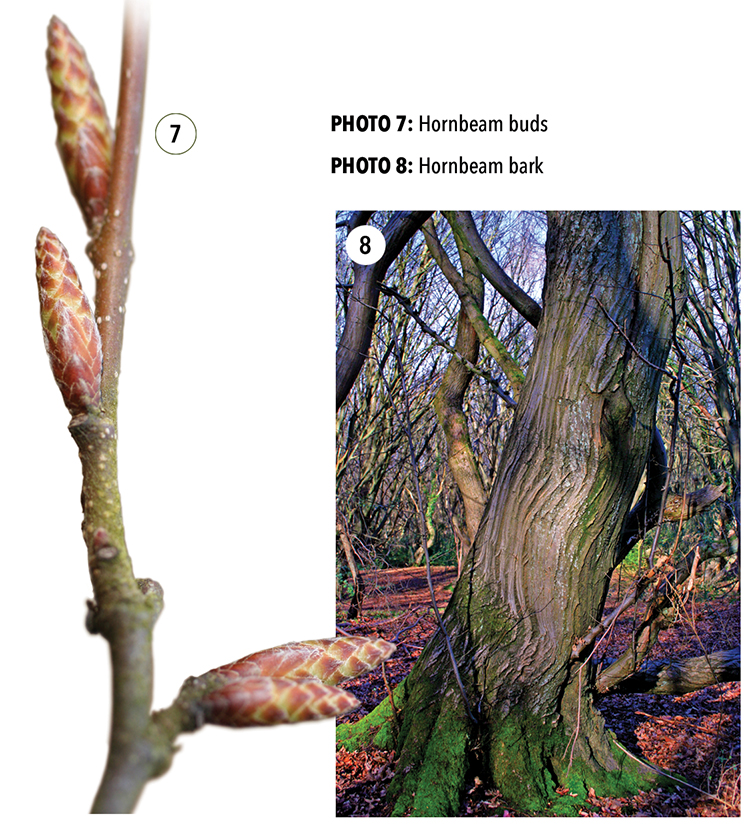 Hornbeams have a tendency to retain their leaves throughout the winter the same way beech does, but autumn hornbeam leaves have a distinctly more yellow hue (photo 6). Hornbeam buds and bark also bear a superficial similarity to beech. Hornbeam buds are narrow and pointy (photo 7), but they are smaller and do not stick out as far from the stem as beech buds. Hornbeam bark is grey and smooth like beech when young, but usually has distinctive vertical snake-like markings and can develop very attractive patterns when older (photo 8).

Hornbeam flowers and fruits are quite different from those of beech. The flowers are produced in longer male and shorter female catkins (photo 9) during April and May, with the male catkins developing somewhat in advance of the female catkins. The seeds, which are a favourite food of the secretive hawfinch, are attached to distinctive three-lobed wings which allow them to travel up to 1 km from the parent tree if the winds are favourable. While they are developing, they are held in attractive hanging stacks (photo 10). 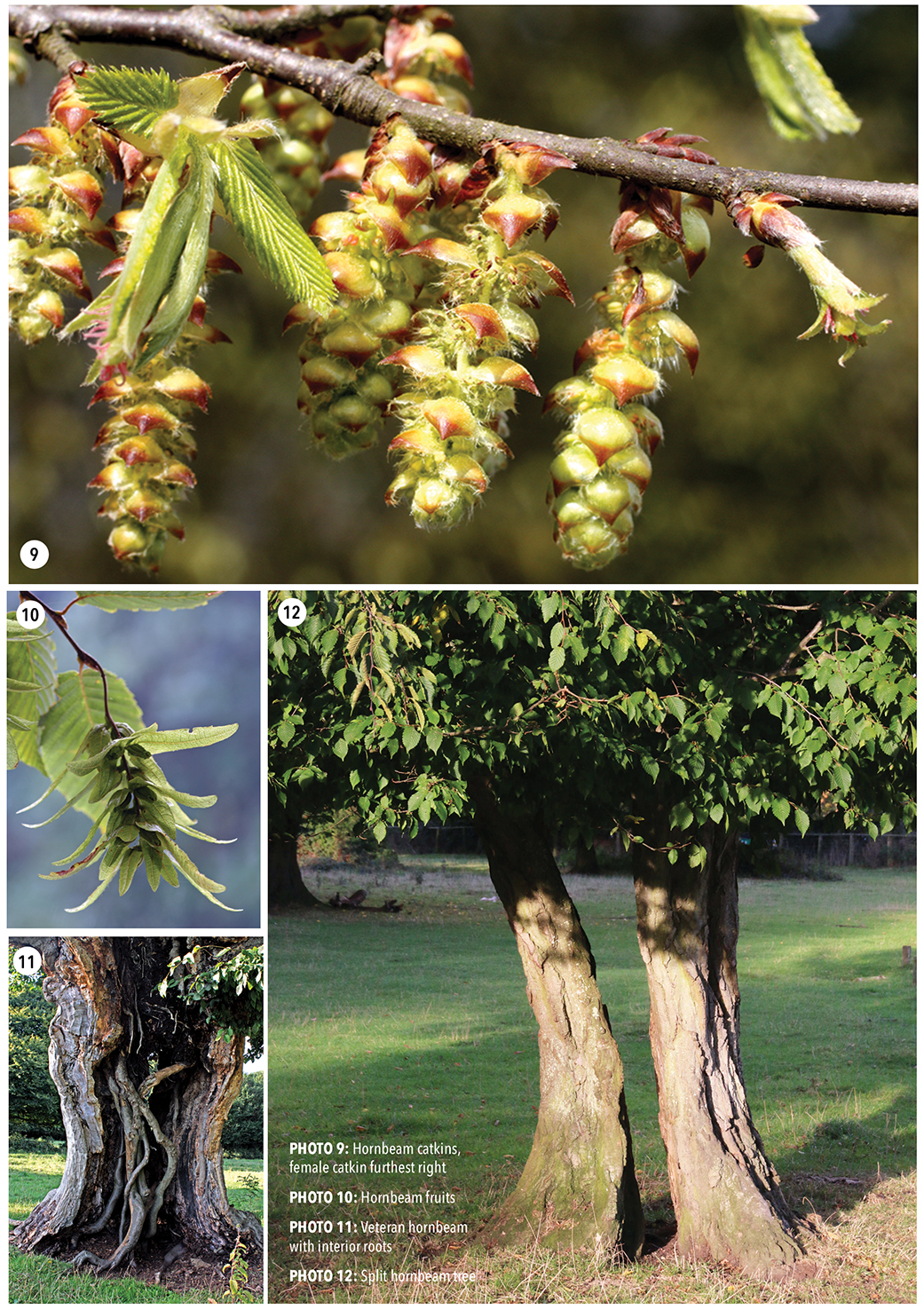 The hornbeam has one more unusual ability: as trees age the heartwood – the old wood at the centre of the trunk which no longer carries water or nutrients – starts to break down. Hornbeams are able to develop interior roots from higher up their trunk which reach down into this rotting heartwood, allowing them to re-absorb the nutrients released by their own decay. This can give veteran trees very interesting shapes (photo 11).

Hopefully these charismatic trees with their cheerful ‘carry on regardless’ attitude (photo 12) will soon regain their former popularity, so that we will once again be able to enjoy their understated beauty more frequently in our parks and gardens.