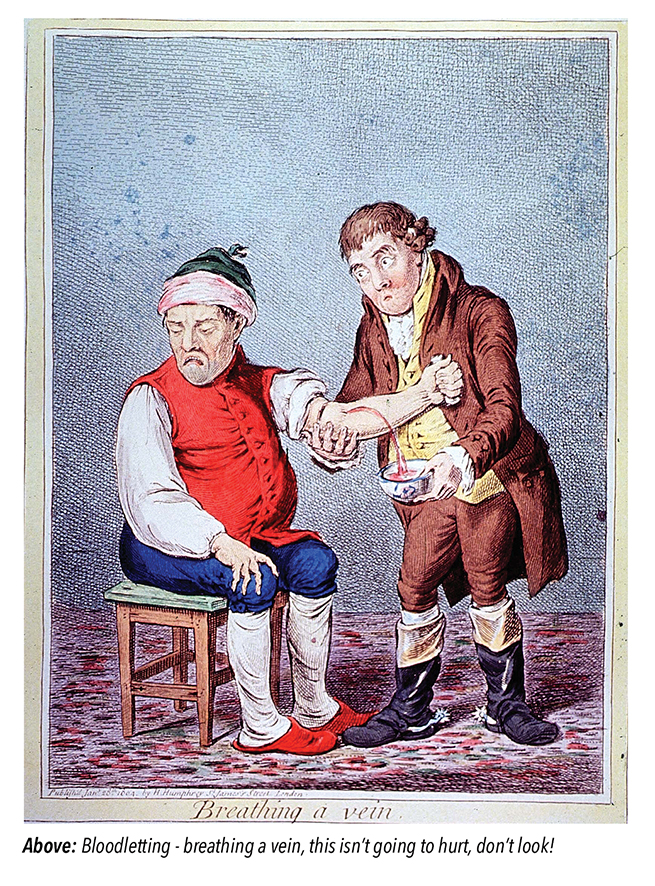 Today, we take the care and services that the NHS provides us with for granted, but if you think getting an appointment to see your doctor is difficult now, think how it was in medieval times

This month I am going to dust off the covers of Swansea’s “Medical Journals”, and investigate what services were available to our ancestors. Dotted throughout the article in bold italics are some medical complaints from which our ancestors might have suffered. Do you know what they were? Answers are at the end of this article.

Swansea General Hospital, (1864), Morriston Hospital (1942) and Singleton Hospital (1963) were not the first hospitals to be established in Swansea. For this we must return to the 12th Century.

In 1332 Henry de Gower, Bishop of St. David’s founded the Hospital of the Blessed David. The purpose of this hospital or almshouse was for ‘the support of the poor chaplains and laymen deprived of bodily health’. The hospital was used until 1548. The remains of the hospital are incorporated in the rear of the Cross Keys public house, in St Mary’s Street, where some of the original 14th century stained glass windows are still in evidence. The Cross Keys, is one of two medieval buildings in Swansea today, the other one being the Castle. Incidentally, the Castle, located in the city centre, is the second castle to be situated there, the first one was of timber construction and built in 1106 – it was attacked and destroyed by Welsh forces in 1116. 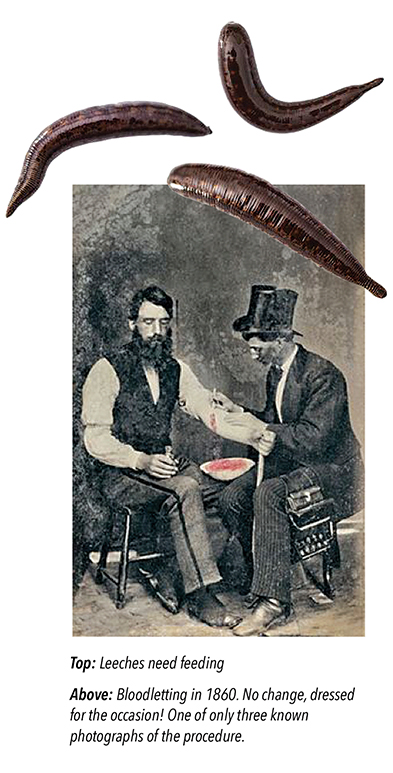 Moving on through the years to the 1700s, patients would have to pay for their medical treatment, however limited it was. Those who couldn’t pay would often end up in the workhouse. A Parliamentary Report in 1777 records a workhouse with a capacity to hold 100 people being situated in part of Swansea Castle. In 1817 it moved to the ‘old’ Bathing House in Swansea Burrows on the Mumbles Road and was known as the House of Industry and Infirmary. This was Swansea’s first hospital, for everyday people. The third location for the workhouse, was Mount Pleasant, where the buildings still stand, although these are now converted to flats.

In the 19th century, medical services were disorganised and uncontrolled, often with limited facilities provided by a Barber-Surgeon. Their favourite recommendations were often, a change of air, vomiting or laxatives, bloodletting, along with the use of leeches. Frequently the power of prayer was used. Medical treatment at this time was often a combination of chance and quackery, although it was during these early days that break-throughs in the fields of pathology, obstetrics, and vaccination were made.

During this period of Swansea’s industrial fortunes, a patient could have been suffering from Effluvium or Jaundice.

It was at this time that the population of Swansea rose. With the advancements of the Industrial Revolution came progress in both prevention and cure. Death rates though were high in cities, not so much in the countryside. Also present were the epidemics, such as Smallpox, Typhus, and Cholera. The first epidemic of Cholera was in 1832, with 152 deaths, followed by another outbreak in 1849, resulting in 521 deaths. 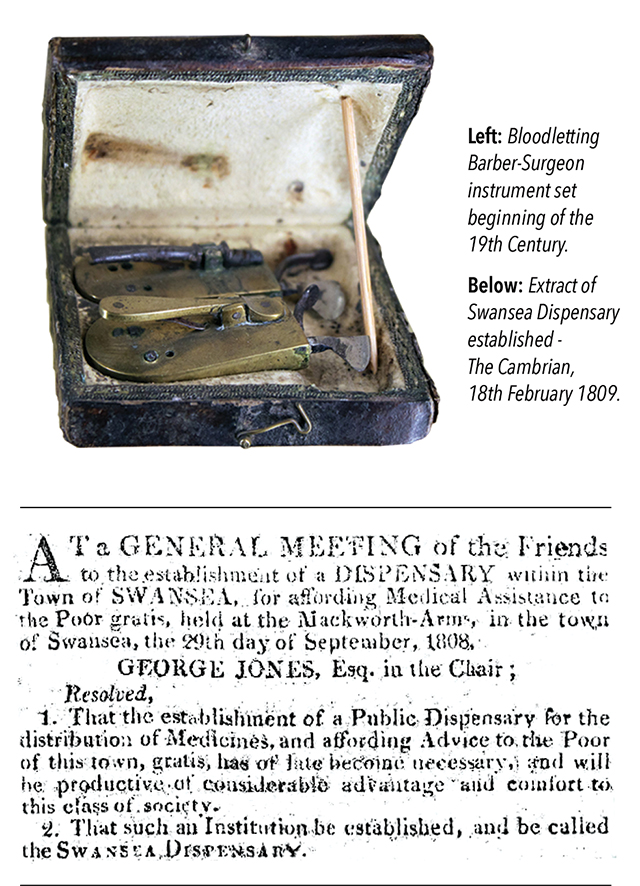 The population of Swansea in 1801 was 6,831. It was during 1808, that the first dispensary was established in College Street. It was funded and maintained by voluntary subscription to help Swansea’s poor for free. The first meeting was held at the Mackworth Arms, where three physicians and three surgeons had been appointed. It was from this site in College Street that the above-mentioned House of Industry and Infirmary was established. It was mentioned in the The Cambrian newspaper in an article dating from 18th February 1809, listing 148 patients who had attended the Swansea Dispensary, where 59 had been cured, 4 had died, and 85 were still in attendance. It also mentions 130 patients had been treated for Cow-Pock.

The next major medical event to occur, after the works of Edwin Chadwick had been published that made the connection between the poor and disease, was the introduct-ion of the Public Health Act, 1848. The Local Board of Health was established in Swansea during 1849 (mentioned in a previous article).

Who were these first early doctors in Swansea?

To find out we must look at the Medical Registers that came into being in 1421. It wasn’t until 1815, when the Apothecaries Act came into force after formal qualifications had been gained by Apothecaries, the modern day equivalent of our general practitioners. It was the Medical Act of 1858 that started medical regulation. It was from this date that a register was printed every year with the list of all qualified doctors, and their year of qualification. 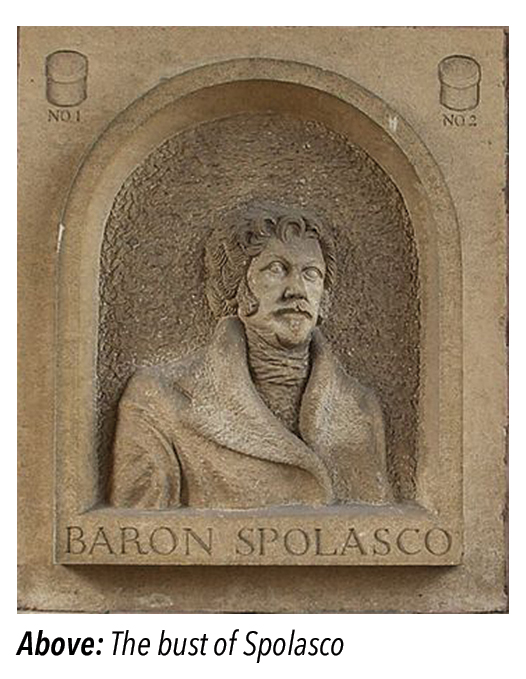 One of the doctors, who won’t be on the list, was Baron John William Adolphus Augustus Frederick Spolasco, the flamboyant ‘doctor’ who fraudulently practised in Adelaide Street from 1838. He claimed that he that could cure all ills instantly, and with one pill. The Cambrian mentioned, on May 27th, 1841, that his treatment, of Mr Griffith Thomas was ‘one of the greatest miracles’. However other patients of the Baron were not so lucky and eventually he was accused of manslaughter but found not guilty.

After another brush with the law, he moved on to New York where he died penniless. His bust can be found in the Maritime Quarter.

Another doctor, John Williams, who had a practise at 10 Heathfield Street, might have left his mark during 1888, in White Chapel, London. The jury is still out on this!

It is impossible to find our ancestor’s medical records even if one so desired. Though those who have any relatives, who were at Swansea Union Workhouse, can view The Register of Births and Deaths, Creed Register, Register of Inmates, Admissions, and Discharges, 1836-1954, at West Glamorgan Archive Service, Civic Centre. Anyone interested in finding out more about any doctors within the family can obtain Medical Registers, at the Wellcome Library, London.

Most of these diseases that I have mentioned throughout have all been eradicated in the UK so don’t worry!

In a later article I will be looking at WW1 medical treatment.

MEDICAL COMPLAINTS OF THE TIME

Cow-Pock – is an infectious disease caused by the cowpox virus

Effluvium – this can be caused by a myriad of things, such as rotting animals, decaying plants, or noxious factories. Patients were recommended not to breathe the “bad air”

Jaundice – liver disease or hepatitis, yellow discoloration of the skin and eyes. Bloodletting was the usual treatment

Smallpox – disease localised in the small blood vessels of the skin in the mouth and throat. It caused scars, blindness, and limb deformities