With only 14 native species of crickets and bush-crickets, one would not expect there to be a particularly wide range of looks and habits, but as it happens these elegant relatives of the more familiar grasshoppers come in all shapes and sizes, and one or other of them can be found everywhere from deep underground to high up in the treetops. 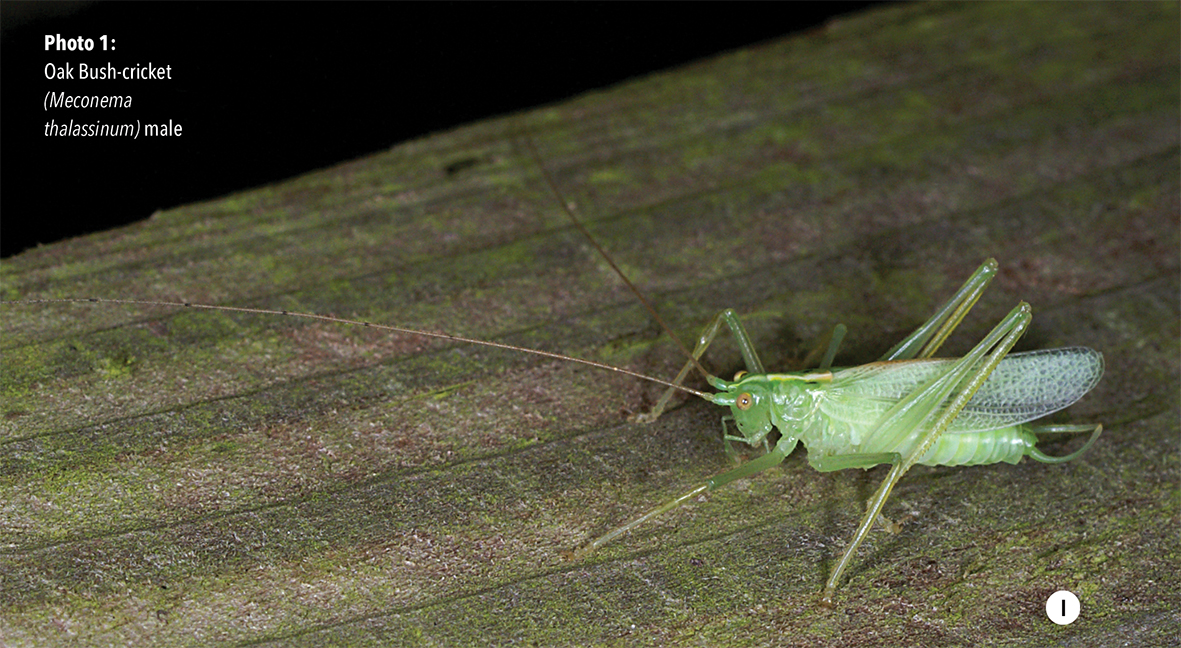 Even where mate attraction is concerned, crickets and bush-crickets show some surprising variability. For example, male Oak Bush-crickets (Meconema thalassinum) (photo 1) do not stridulate. Instead, they tap one of their hind feet against leaves or branches in their treetop habitat at the astonishingly fast rate of around 40 beats per second, producing a drumming sound. They have specially adapted hardened pads on their feet for this purpose and, depending on the substrate, are able to produce sound which can be heard up to 4 metres away.

The tiny (<13mm) Scaly Cricket (Pseudomogoplistes vicentae) (photo 2), on the other hand, is wingless and is not known to produce any sound. This rare and elusive species lives exclusively on the strandline and is only found in a few locations along the south coast of England and in Pembrokeshire.

The majority of crickets and bush-crickets, however, do sing in the way for which they are renowned, and many of the songs produced are very distinctive, so much so that they can often be used to positively identify the species of the singer. Some songs are clearly audible and can be relatively melodious, for example that of the rare Field Cricket (Gryllus campestris) (photo 3), which can be heard from up to 100 metres away. The male Field Cricket possesses particularly intricately sculptured fore-wings on which it performs its song from the opening of its undergroundburrow. Other songs, for example that of the uncommon and secret 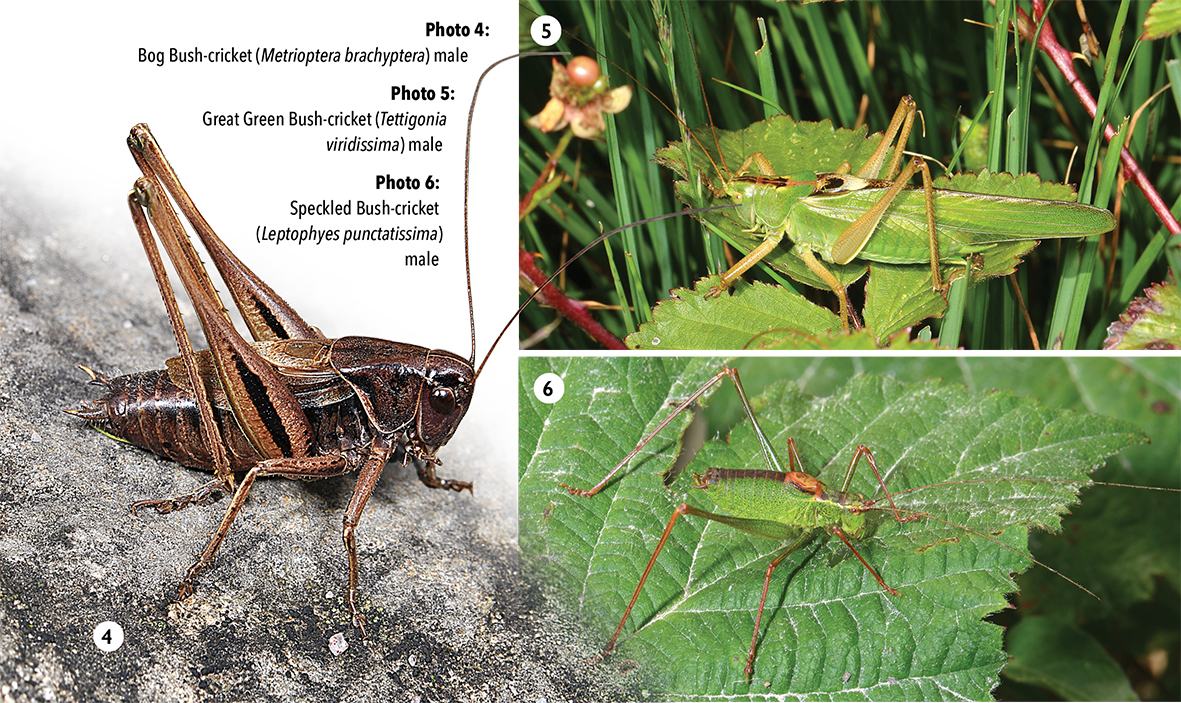 ive Bog Bush-cricket, (Metrioptera brachyptera) (photo 4), consist of much quieter, shorter and more rapidly repeated chirps. Songs generally vary somewhat depending on ambient temperature. In hot weather, for example, the impressive (up to 55 mm body length) Great Green Bush-cricket (Tettigonia viridissima) (photo 5) repeats its chirps so quickly that its song sounds almost like a continuous buzz, whereas in cooler conditions it is easy to make out the separate chirps. Finally, the song of the Speckled Bush-cricket (Leptophyes punctatissima) (photo 6) is so high-pitched that it is almost inaudible to the human ear, and biologists usually have to resort to bat detectors to make it audible. Unusually, in this species the female is also able to stridulate and does so in response to the male’s calls.

In addition to their main calling song designed to attract females and repel other males, the males of some species are known to produce additional songs. These include aggressive songs produced when two males meet, close-up courtship songs designed to woo a female prior to mating, and so-called ‘triumphal’ songs performed immediately post-mating. 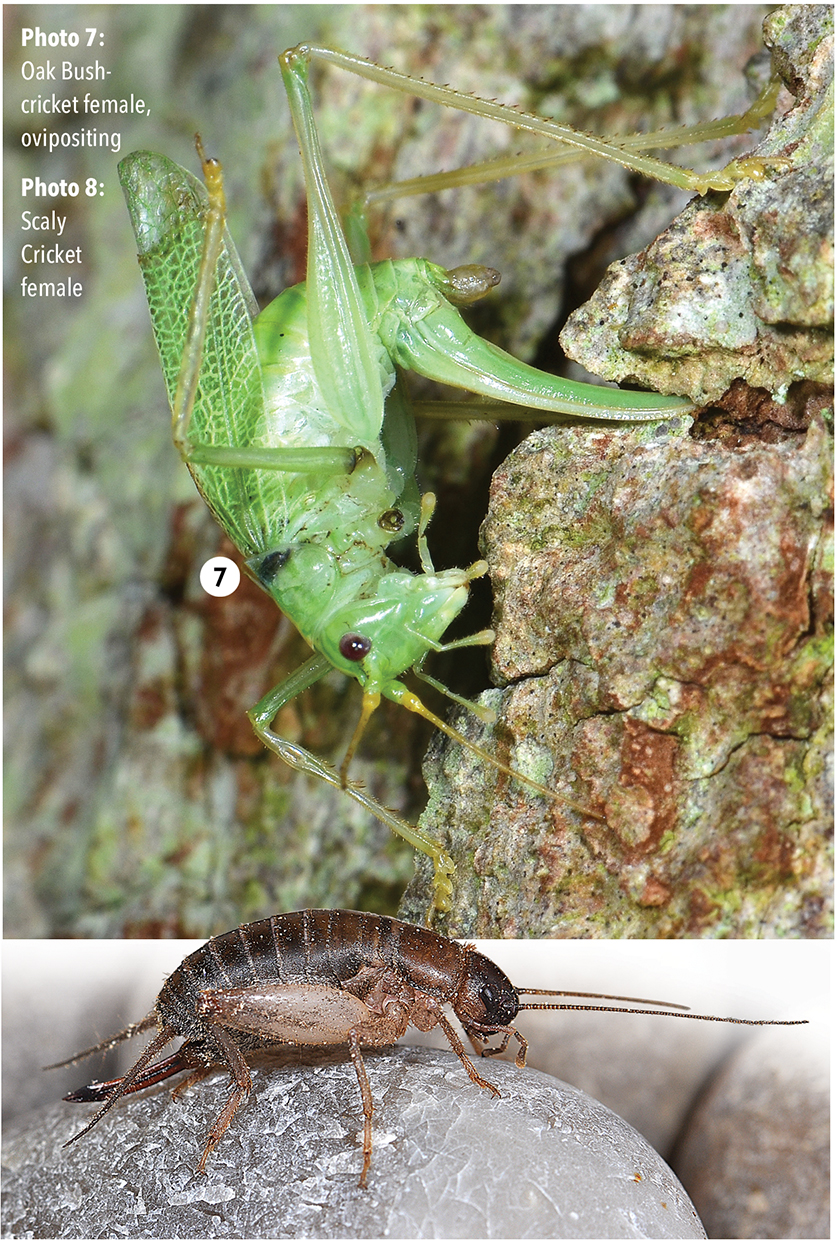 Once a male has successfully charmed a female with his song(s) and mating takes place, in many species there is a transfer of not only sperm (contained inside a small structure referred to as ‘ampulla’), but also of a gelatinous mass called a spermatophylax. The spermatophylax can be very large (reaching 40% of the male’s body weight in some bush-crickets) and remains outside the female’s body. It has been shown to contain high concen-trations of amino acids which are very appealing to the female, so that when mating is complete, the female removes the spermatophylax from the tip of her abdomen and consumes it, before later carrying on to remove the ampulla. While she is eating, the sperm have time to make their way out of the ampulla and into her reproductive tract. If a female is artificially prevented from eating the spermatophylax, or decides to discard it because it is not tasty enough, she immediately proceeds to removing the ampulla and all the sperm left within it, dramatically reducing the male’s reproductive contribution.

When it comes to egg laying, there is much variation with regard to preferred substrate, and the often impressive ovipositors typical of crickets and bush-crickets are equally variable. The long, narrow ovipositor of the female Oak Bush-cricket (photo 7), for example, allows the female to place her eggs deep within cracks in bark. 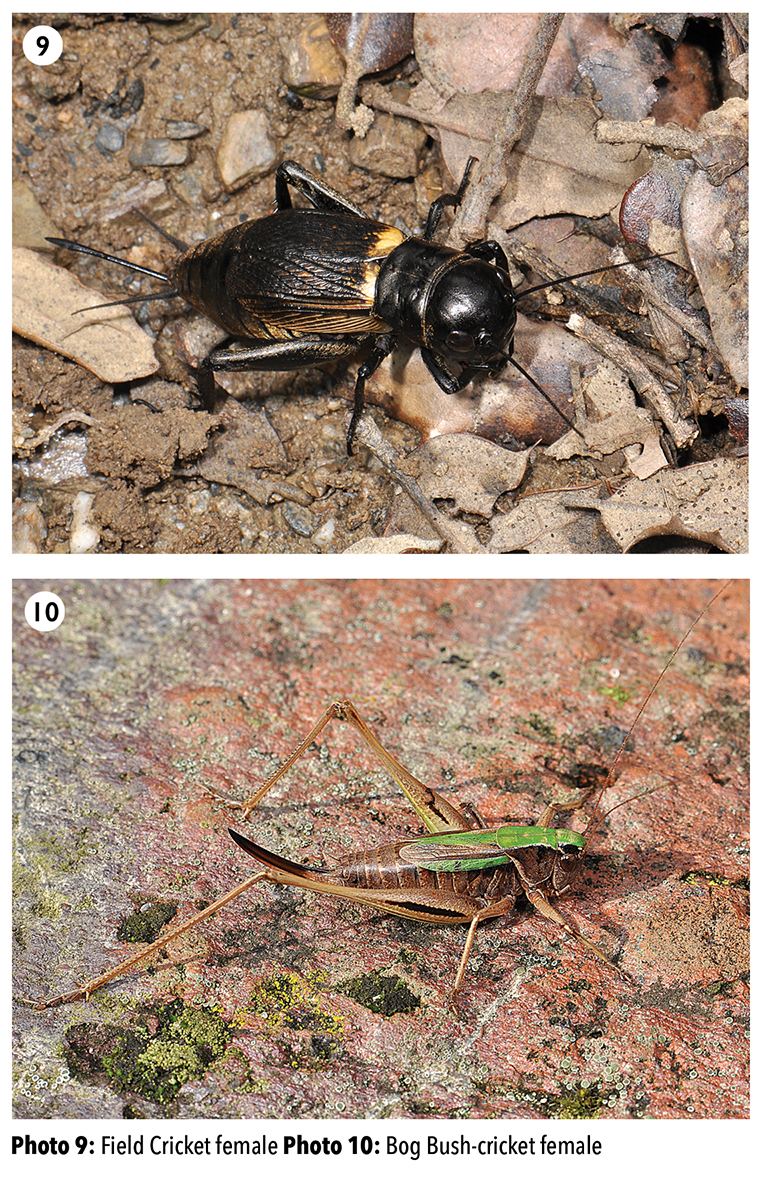 Until recently, nobody knew where female Scaly Crickets (photo 8) lay their eggs. In a detailed long-term study of the species, Professor Karim Vahed from the University of Derby has just discovered that they prefer soft driftwood as an egg-laying substrate to the more intuitive option of damp sand. The study also showed that the eggs take a year to hatch. This combination of factors may turn out to be an important dispersal mechanism for the species, potentially allowing it to colonize new habitats if their nursery wood gets picked up by the sea and is deposited further along the coast, or possibly even further afield.

The even thinner, needle-like ovipositors of female Field Crickets (photo 9) allow them to ‘inject’ their eggs into grassland soil. Female Bog Bush-crickets (photo 10), on the other hand, use their sharp ovipositors to cut slits in soft plant stems into which they insert their eggs.

Great Green Bush-crickets overwinter as eggs, so females have to lay their eggs deep in the ground for protection. In order to achieve this, they have an extraordinarily long ovipositor, which is almost as long as their (already unusually large) body (photo 11). Female Speckled Bush-crickets use their strong ovipositors to place their eggs into tight crevices in bark or other dry plant material (photo 12).

The most fearsome looking ovipositor probably belongs to the female Wart Biter (Decticus verrucivorus) (photo 13). This endangered species, which only occurs in a handful of nature reserves in England, lays its eggs deep in bare ground adjacent to grass tussocks, where the eggs remain dormant for at least two winters. At up to 40mm body length it is one of the largest, and probably the heaviest, British bush-cricket. It derives its curious name from the ancient custom of holding the head of one of them against a wart on somebody’s skin, which the animal would bite down on and regurgitate diges-tive juices over in defence. It was hoped (generally in vain) that this would aid in removing the wart from the skin.

Now that similar services are more commonly provided by GPs, crickets and bush-crickets have be-come largely unfamiliar and are often overlooked. This is not all due to lack of human interest or attention, however. Many species are uncommon, and most do not occur in large numbers even where they are present. They are also very well camouflaged and much more prone to hiding or quietly drop-ping into the undergrowth when disturbed than the more familiar bouncy grasshoppers.

Perhaps it is just as well that they keep a low profile, to prevent themselves from being used for such pastimes as cricket fighting, which even today is still practised in China, and where two males are pitted against each other in a small ring. Champion crickets have been known to change hands for considerable sums of money, and – although illegal – betting is frequently involved.

Luckily, until this custom spreads to Europe, some temporary persecution by overly keen wildlife photographers is about the worst our native crickets and bush-crickets have to put up with. Once spotted, some have proved to be rather accommodating photographic subjects, so it is always worth sneaking up on a suspicious chirp!