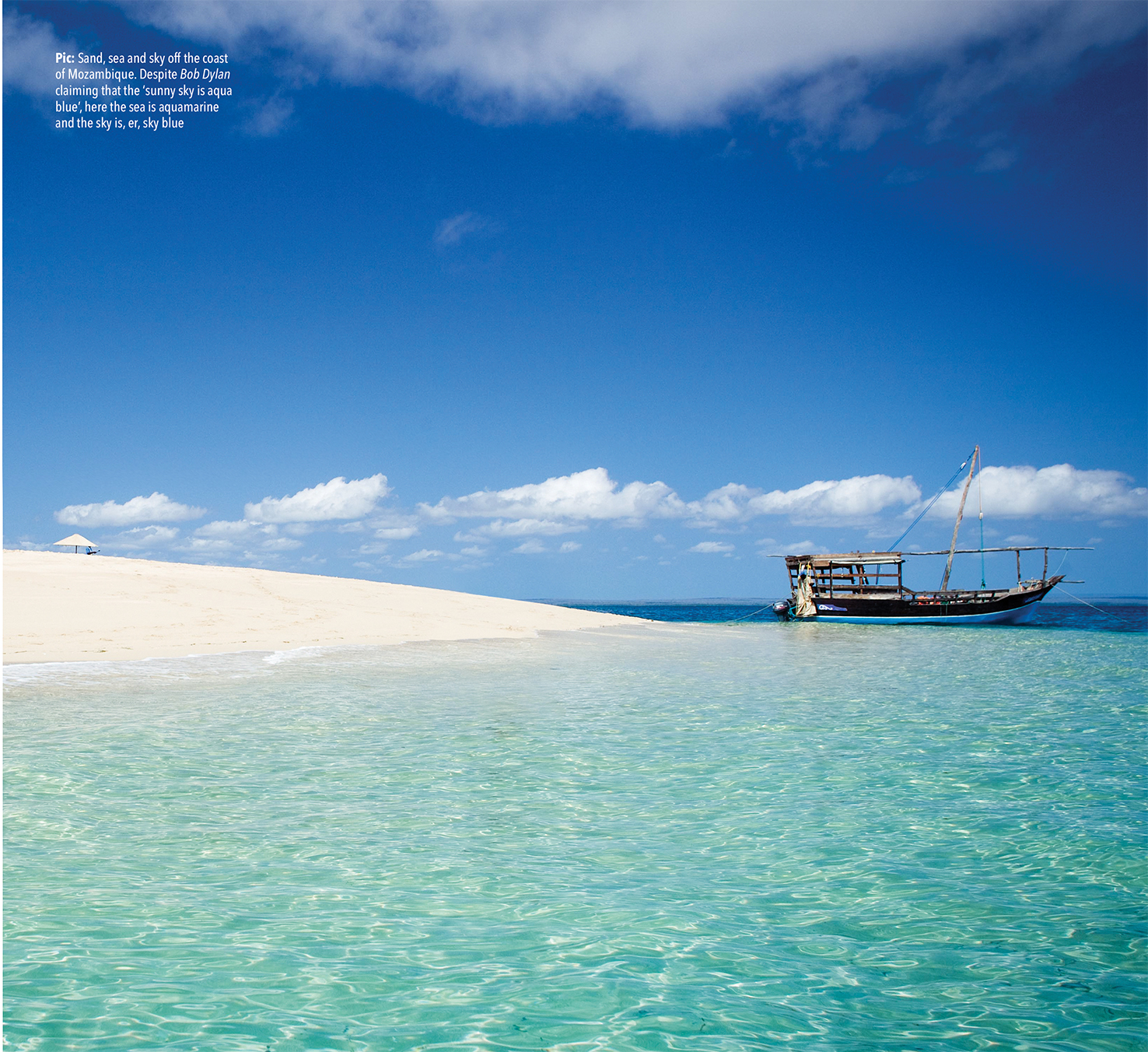 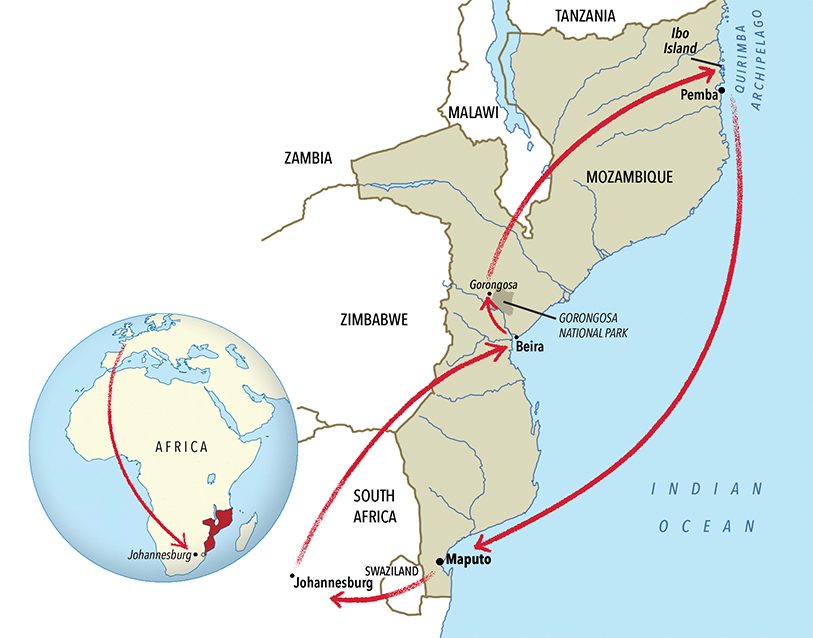 By the time we reached camp in Mozambique’s Gorongosa National Park, we were beyond exhausted.A sleepless overnight flight south from Heathrow to Johannesburg, followed by another international flight to Beira and a ten-hour drive in a boneshaker Land Rover, most of which was in darkness, meant that we were half dead with fatigue. The local ranger, Rob, cheerfully greeted us and helped us with our gear. “Fancy a cold beer, boys?” he asked with a heavy South African burr. My travelling companion Chris Leadbeater – a well-known national newspaper journalist – and I said we’d leave it until tomorrow. For now, please show us where the tent is. I was so tired I barely even shook hands with my host.

The tent was one of those big ‘box’ contraptions with separate quarters, right on the edge of the bush camp. Rob had wished us goodnight with the warning: “whatever you do, whatever you hear, do not set foot outside the tent until it is light.” I was just settling down to my first sleep since London when I heard an unmistakable low-frequency rumble coming from outside. Chris asked me what it might be. “Oh, that? It’s a lion. 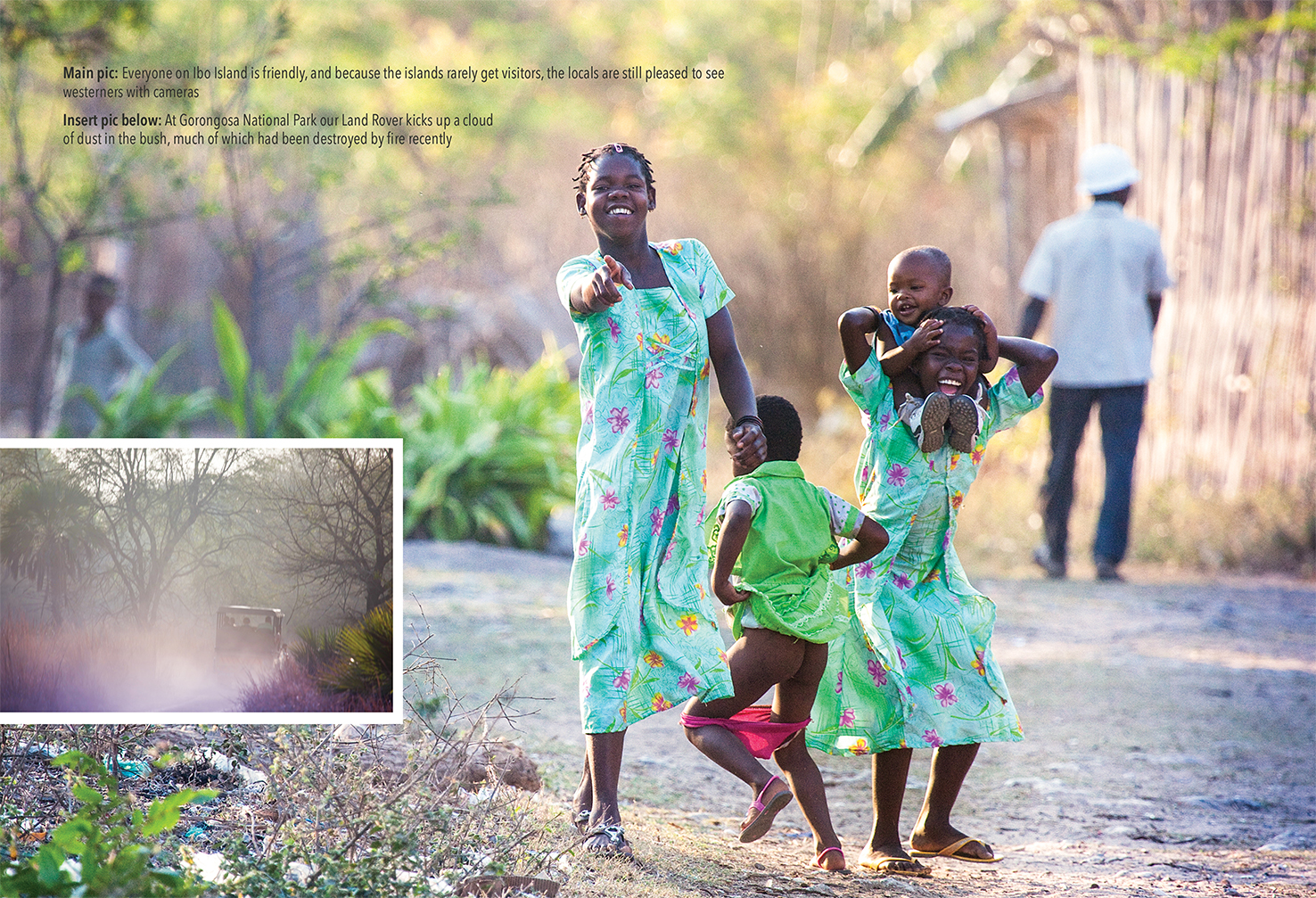 But don’t worry,” I said. “It’s miles off. Sound carries a long way in the still of the African night.” And with that I fell asleep.

The smell of freshly brewed coffee pulled me out of the tent at dawn, and there was Rob, rifle slung over his shoulder, and we all introduced ourselves again. “Did you hear the lions?” I asked the ranger. Sure, said Rob. “They spent most of the night a few feet away from your tent. Normally, they come no closer than the ravine. But last night something spooked them and they came into camp.” Rob then advanced the theory that they’d been disturbed by a BBC film unit that had loudly rolled into the area a few days ago. Rob swore in Afrikaans, muttering something about how, if he saw those bliksem BBC boomslangs again, he’d shoot them for disturbing his lions. “Where are they now?” I asked referring to my media brethren. “Asleep under a tree” replied Rob, referring to his lions. 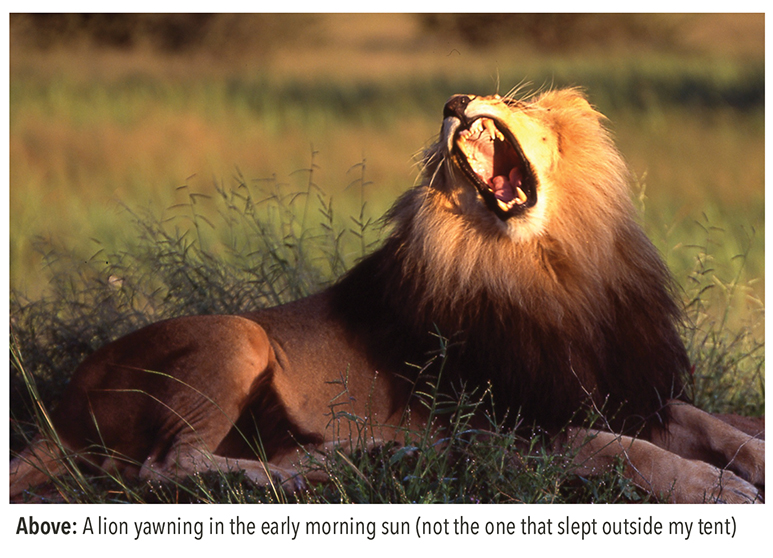 ver the next few days the three of us made several Land Rover reccies into the bush to see what wildlife was in the area. But apart from a few baboons and warthogs, monitor lizards and goliath herons, there wasn’t much around. A bush fire had ripped through the area recently and what animals there were had moved on, explained Rob. “In any case, there are no zebra, antelope or giraffe here any more.” The lions were just passing through and would be gone soon.

But, he said optimistically, we might be in luck and see a few elephant. Only don’t hold your breath, because ever since the Mozambican Civil War they have been reluctant to come here by day. Sometimes at dusk you’ll see them through your binocul-ars on the horizon. But they won’t come close. During the war, soldiers of the Front of Liberation for Mozambique (FRELIMO) and their opposition, the Mozambique Resistance Movement (RENAMO) slaughtered most of the wild animals to feed their armies. The lions were, after generations, starting to come back. But the elephants… “It’s true what they say. They never forget. They want to come home. But they won’t any time soon”. But the war was years ago, I said to Rob. “Yes. But they pass the know-ledge on to their calves. Their mothers bring them to the ridge to show them that they must not go any further until it is safe.” 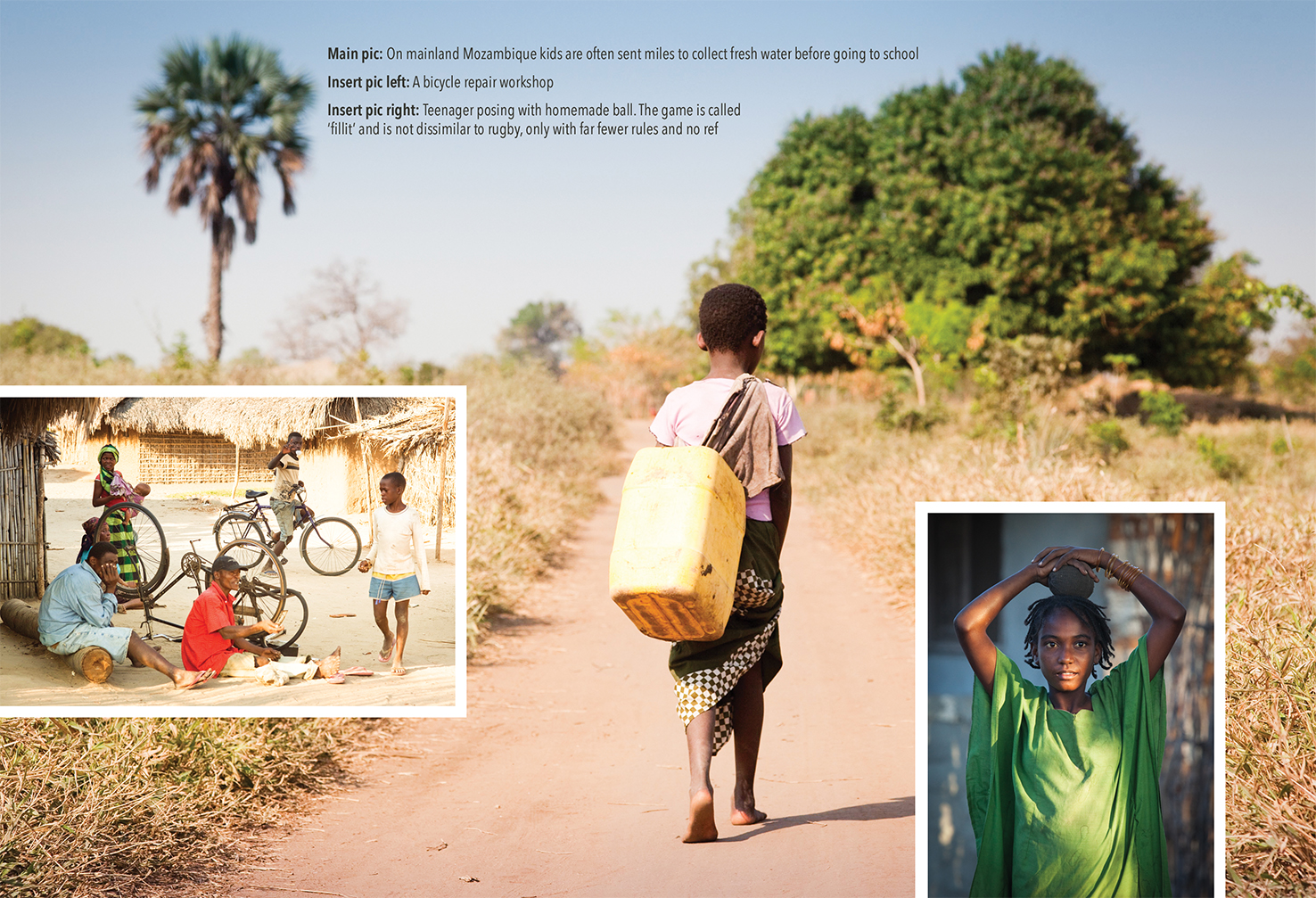 Into the heart of darkness 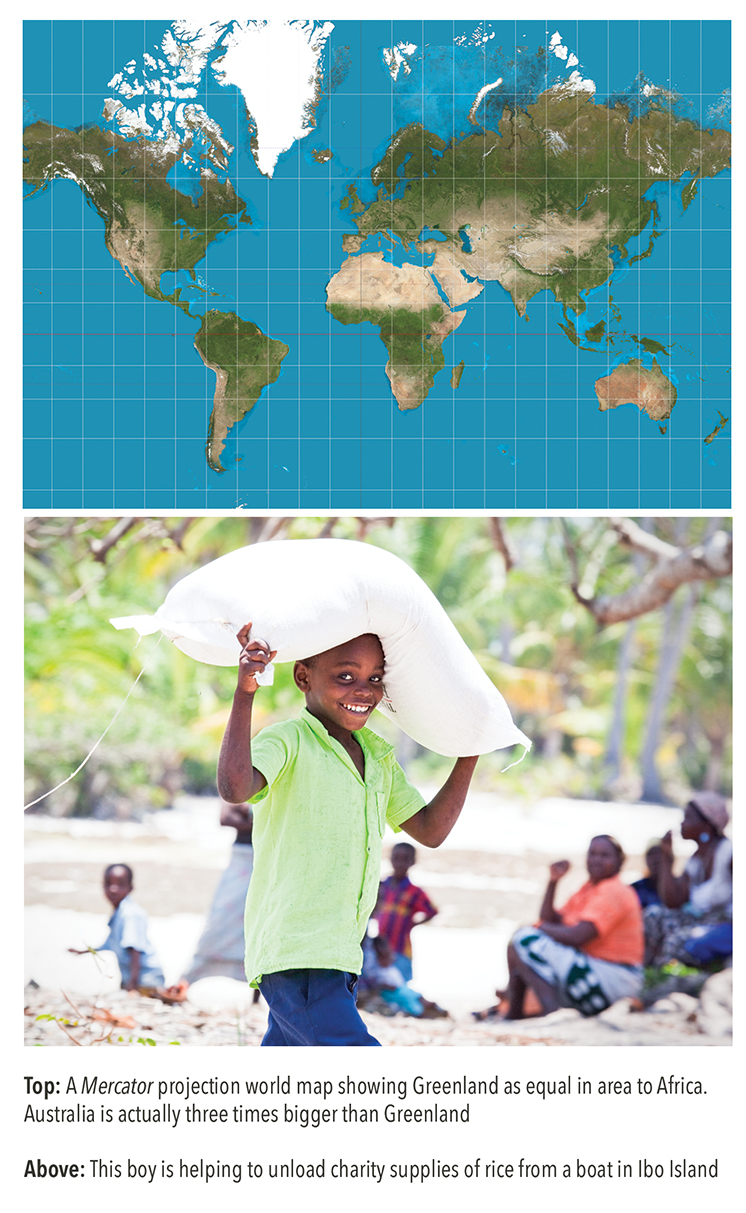 We know so little about Africa it’s embarrassing. When we look at a standard projection map of the world, such as the Flemish cartographer Gerardus Mercator’s, Africa appears roughly the same size as Greenland. But these historical maps were drawn in such a way as to give visual priority to places of political importance. What this means is that the lines of latitude – the ones that go horizontally around the planet – in the southern hemisphere are bunched together much more closely than the northern ones, giving the impression that Greenland (at under 1 million square miles) occupies the same area as Africa, which is a shade under 12 million square miles. Of course, Greenland wasn’t important in Mercator’s 16th century world. But tiny countries in Western Europe like ours were, and so we cooked the books to make ourselves look big and clever. Now look at the world’s landmasses on an ‘equal area’ projection map and you start to see how colossal Africa truly is. And yet, we know next to nothing about it.

If you think I’m exaggerating just how little we know of the ‘Dark Continent’, do the following experiment. Remember that parlour game we used to play as kids, where we’d sit around trying to name the 50 states of America in less than five minutes? Most of us can get somewhere near it, or at least, we could when we were studying geography at school. Now try to name the 54 countries of Africa. If anyone reading this (who isn’t a geography graduate or teacher) can get more than ten straight off, I’ll happily buy them a pint. So when we think of Africa, what we really mean is that safari holiday in Kenya, honeymoon at the Cape vineyards, or school trip to the Pyramids at Giza. Beyond that, all we really know is what the TV and newspapers tell us. But we learn more from what they don’t. 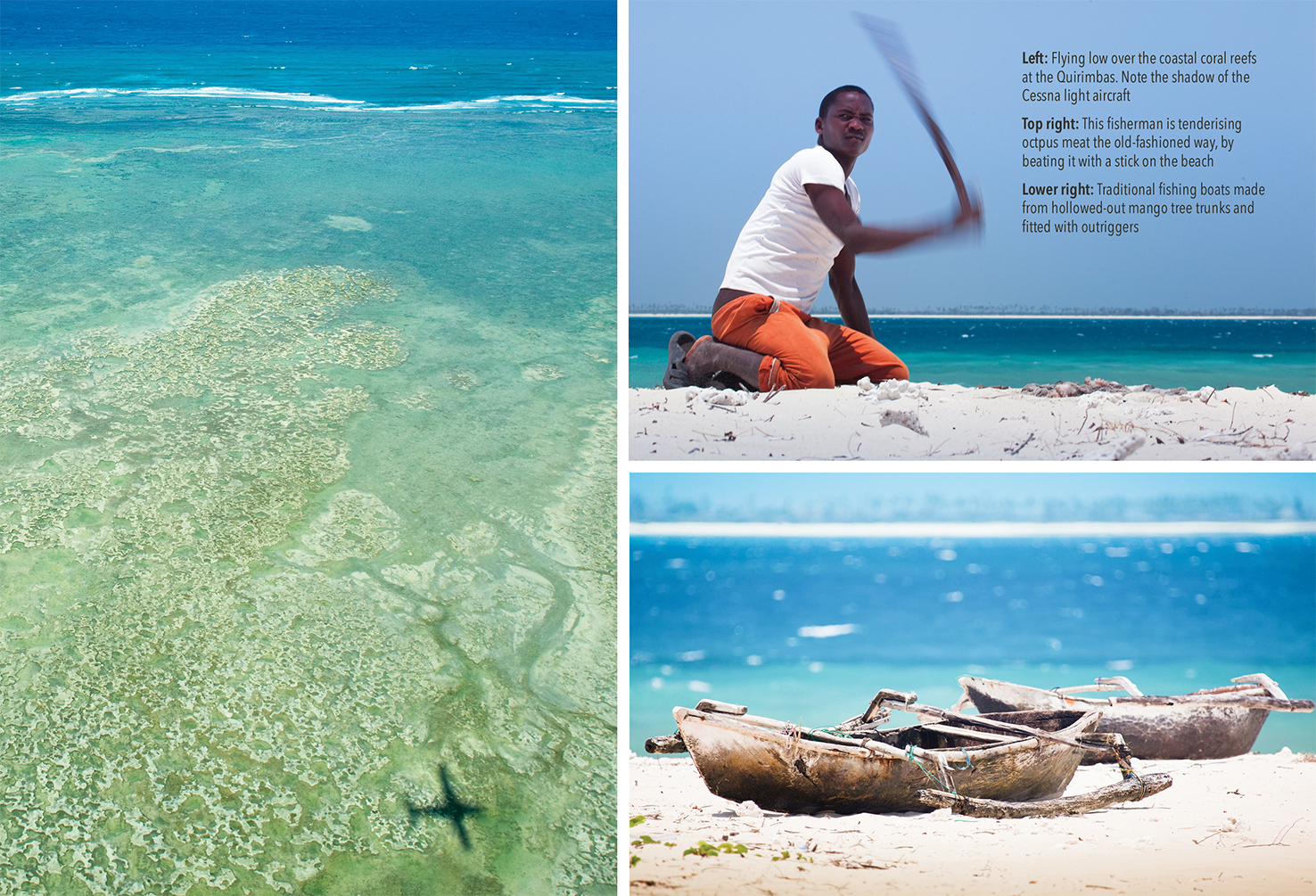 In search of Bob Dylan’s Mozambique

With Mozambique you get both sides of the coin. On the one, there is the impact of a war that goes so deep into the country’s bones even the wildlife remembers it. And yet on the other, you have the beginnings of economic reconstruction, a process tentatively spearheaded by foreign aid and tourism. And since the few tourists who make the effort to go to Mozambique will inevitably end up in the small cluster of tropical islands called the Quirimbas, this is where Chris and I headed next. As we said goodbye to Rob we wished him all the luck in the world with his work at Gorongosa. He was going to need it.

What followed next was one of those blurry sequences you only ever get when flying ‘bush-class’ in Africa. What was supposed to be a quick hop, skip and a jump in a Cessna or two ended up with Chris and I having our passports taken off us by green-uniformed men with guns, while I was nearly arrested, accused of trying to smuggle endangered bird species feathers out of the country. Despite my vigorous remonstrations that the goliath heron was not an endangered species, the officials –­ who were looking for a bribe – pretended to take a dim view of the foot-long feather festooning my straw hat. To make their position even more ridiculous, as we were waiting for an internal flight, we could hardly be accused of smuggling anything anywhere, either. But Mozambican officials, it seems, have little in the way of a sunny side to their character, and so being good-natured with them only served to make our situation worse. Four hours later we were tetchily reunited with our passports and thankfully airborne again, en route to one of the smallest airports I’ve ever flown to. At Ibo Island, as we tumbled out of the 4-seater into the equatorial sun, we realised that we’d arrived at one of the most extraordinary places either of us had ever been to. 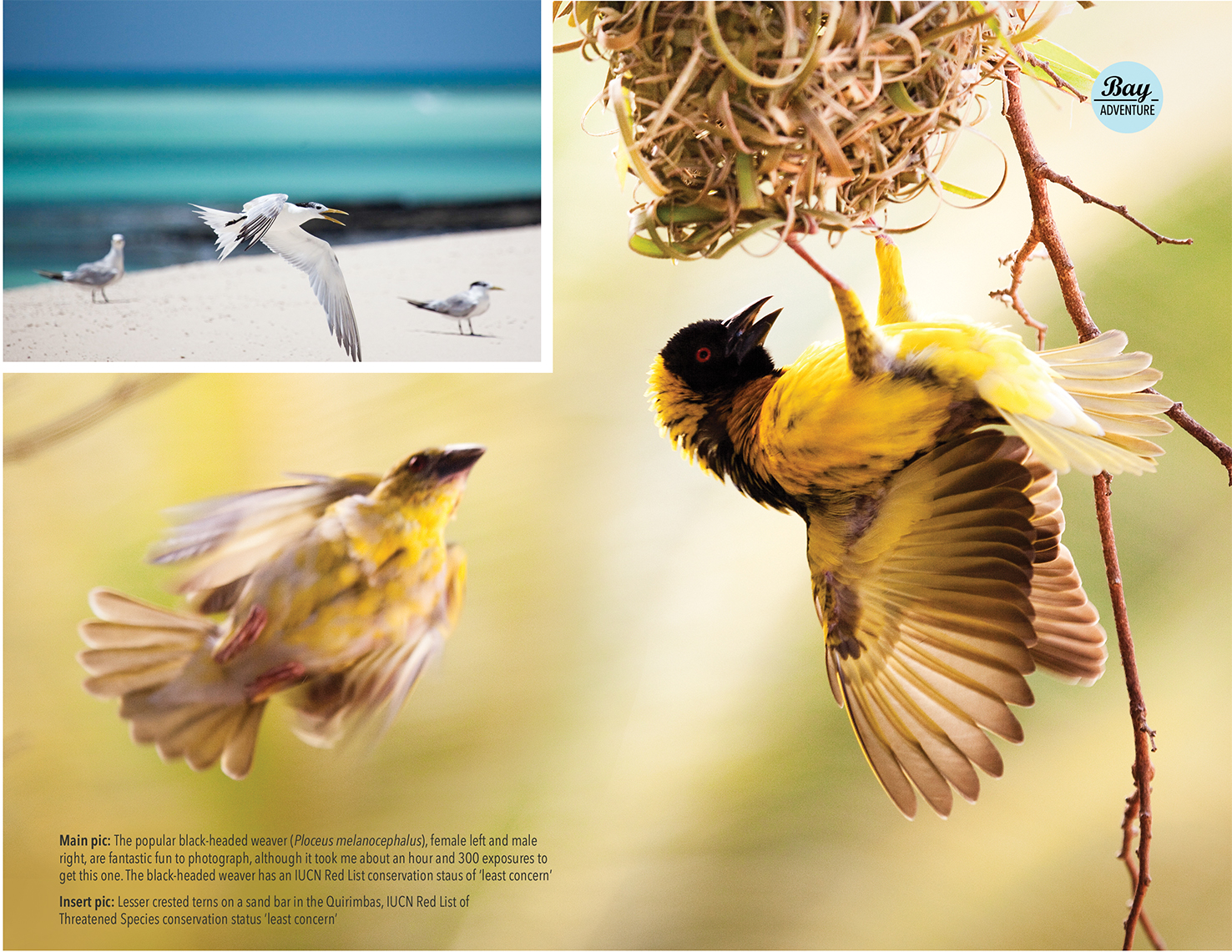 There’s a song by Bob Dylan on his album ‘Desire’ simply entitled ‘Mozambique’. It’s a light and breezy affair recalling how the ‘sunny sky is aqua blue’, while describing the ‘lovely people living free, upon the beach of sunny Mozambique’. When the song was originally released in 1975 the critics hated it, with some accusing the troubadour of trivialising the politics of the Civil War (one even thought that Dylan had intended the song to be about Marseilles, but then

changed its title to bring the lyric within his songwriter’s rhyming skills). But I’ve always found it harmless. And while I stayed in the Quirimbas, wandering through the ghostly colonial ruins of the Portuguese era, I started to see what it was about. Because here at Ibo, there is a sense of what the country was like before internal conflict put the place on the map. So laid back is Ibo – the main island of the archipelago – that you soon find yourself without the need for either shoes or a watch, idling away the hours photographing weaver birds for fun. 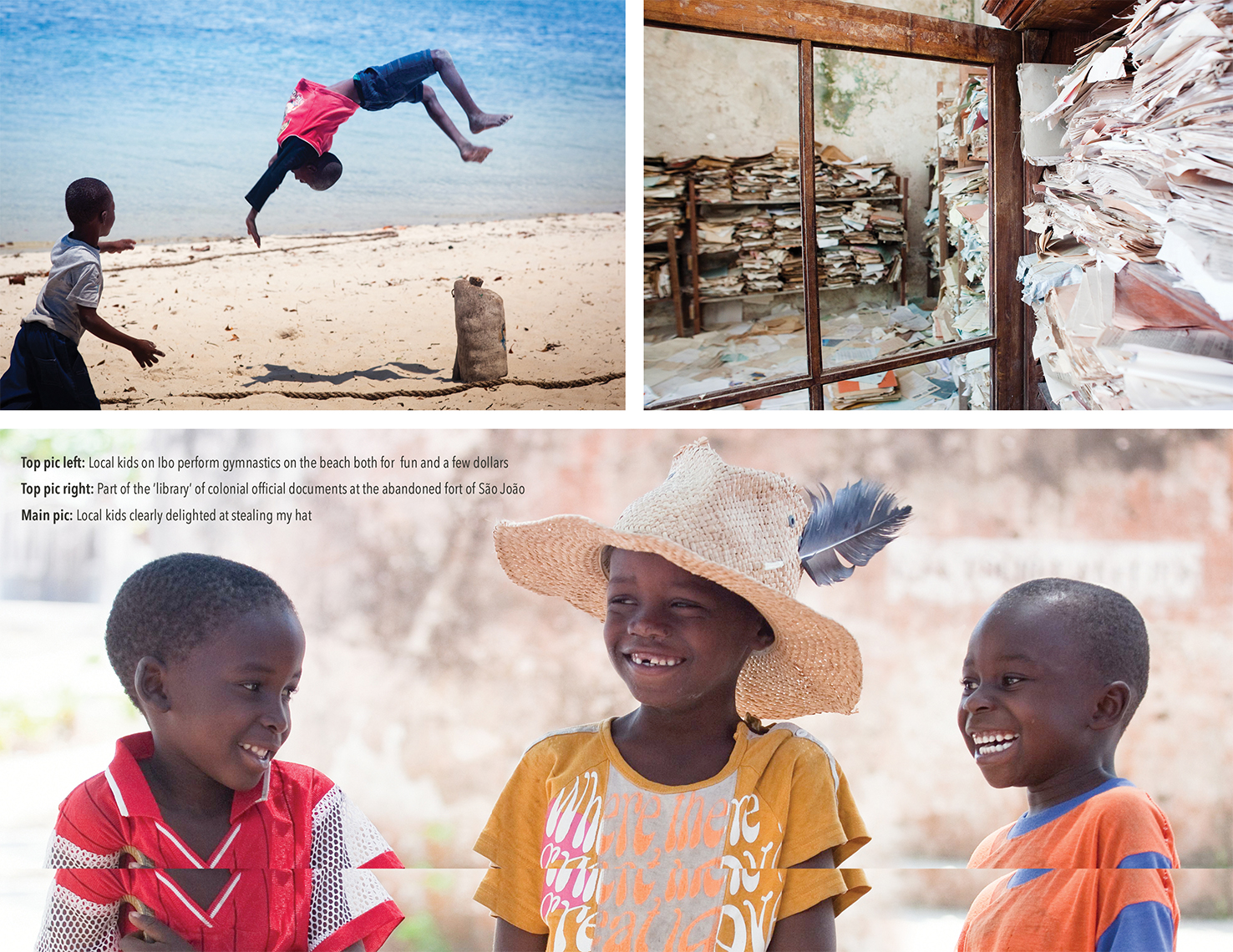 But you do definitely need a hat – remember this is Dylan’s ‘sunny Mozambique’. And while this was the very same headgear that had started all the kerfuffle with the boring green-uniformed officials, here it seemed to be a source of endless amusement to the local kids, who took it upon themselves to devote hours to stealing it. Chris and I visited their village to meet their families, who fed us and invited us to a local football match where the players wore Juventus FC jerseys, but only one boot each. They took us fishing and we helped them unload sacks of supplies sent to the island by aid charities. They performed gymnastics on the beach for the camera and tried to sell us ancient coins they’d found in the sand that really should be in a museum. They took us to the abandoned fort of São João, where they proudly showed us the ‘library’ of government documents from the Portuguese era strewn on the floor and blown to the four winds.

Before long it was time to fly to the capital city Maputo, from which began the long haul to Heathrow. On the way back I started to think that of all my trips to Africa – and I’ve been there more than 30 times – this was the one where I’d started to understand what the continent is really like. But then again, trying to find the ‘real’ Africa is probably as absurd as trying to find the real anywhere.