AS THIS IS THE MONTH THAT SITS BETWEEN WHAT IN MY HUMBLE OPINION ARE THE TWO GREATEST EVENTS OF THE MOTORING CALENDAR, A SPECIAL AUTO NEWS FOR AUGUST SEEMED WHOLLY APPROPRIATE

This month we take a look back at what we thought were just some of the myriad highlights of July’s GOODWOOD FESTIVAL OF SPEED, and one that hints as to what’s been promised for THE GOODWOOD REVIVAL in September too. Any excuse… 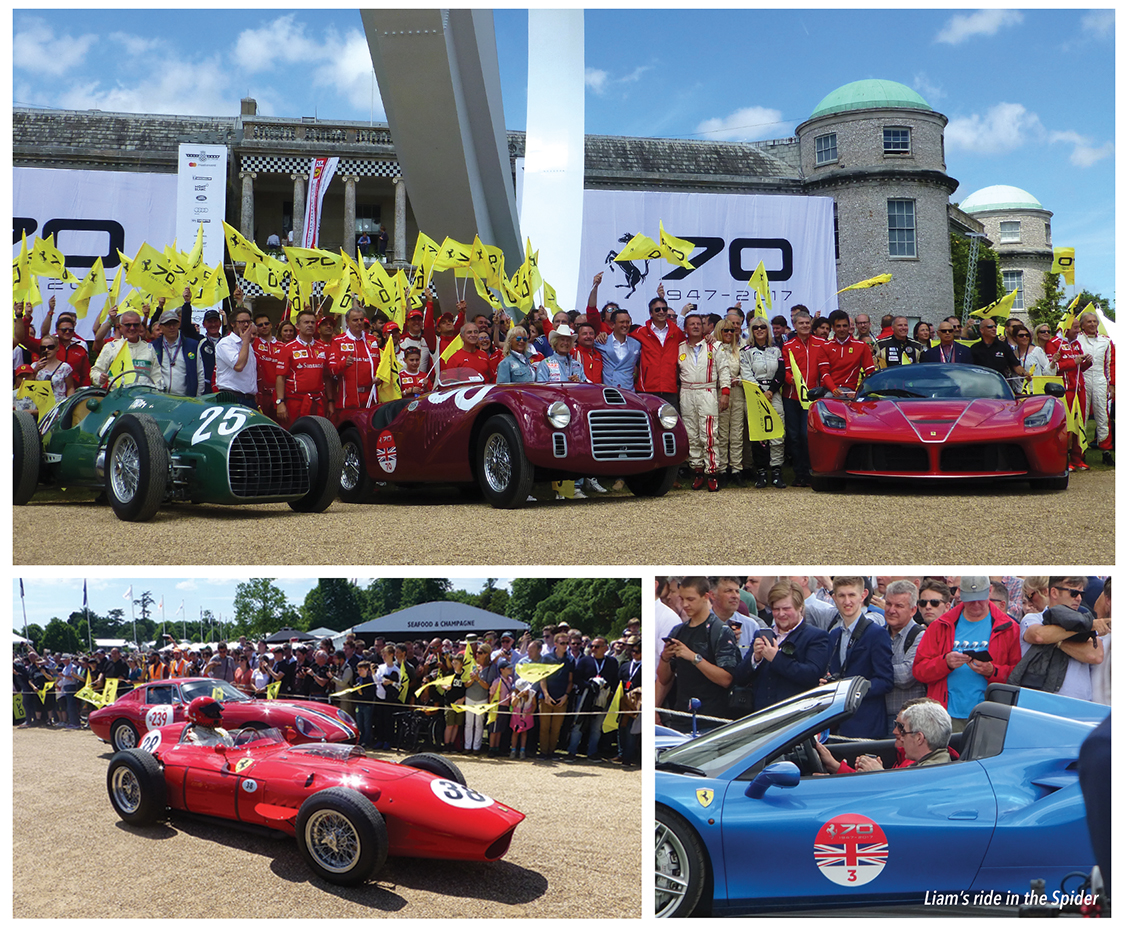 Surely the absolute highlight of this summer’s Goodwood Festival of Speed had to be the glittering array of at least 70 significant Ferraris, brought together from across the world in order to celebrate the legendary Maranello marque’s 70th anniversary of its founding by il commendatore, Enzo Ferrari, in 1947.

From Thursday June 29th to Sunday July 2nd, a mouth-watering variety of Ferrari’s finest road and racing cars were on parade, and on the track, at the Sussex Festival. Competition sports cars and single seaters, incredible road cars, and the very latest supercars were all present. For the Tifosi – lovers of the iconic Italian brand – and for yours truly, who bagged a ride up Lord March’s 1.16 mile driveway racetrack in a beautiful blue 488 Spider, it truly was a once-in-a-lifetime experience. 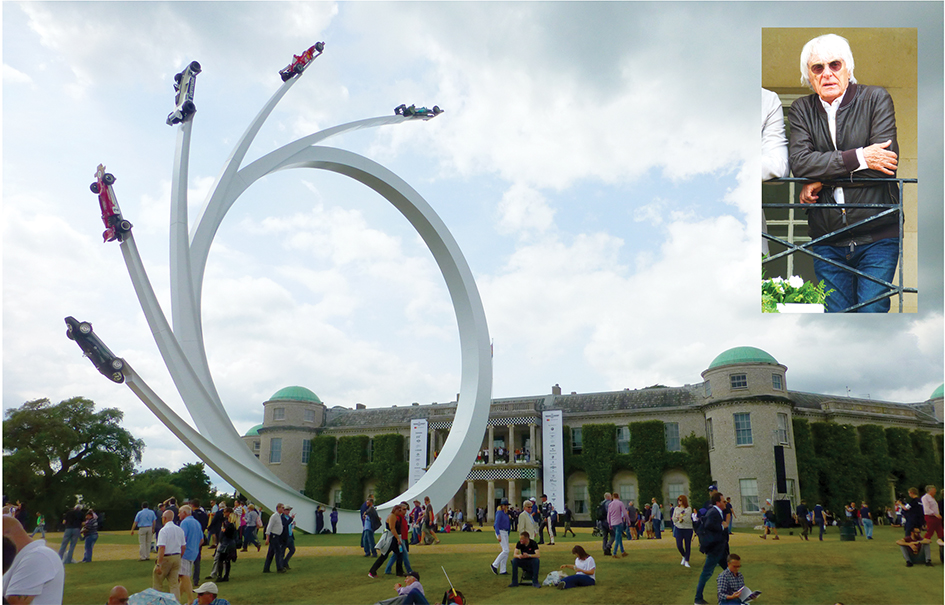 THE 5 AGES OF ECCLESTONE CENTRAL FEATURE by GERRY JUDAH

As the sun came up on the 25th Goodwood Festival of Speed visit-ors were treated to another iconic creation by sculptor Gerry Judah, designed to celebrate the extra-ordinary life and career of none other than Bernie Ecclestone.

The jaw-dropping work was in recognition of the ‘The Five Ages of Ecclestone’; five defining eras of Bernie’s career, as a driver, manager, team owner, impresario and quite simply as a legend of the sport. Each age was portrayed by a different car, glinting high up on the Central Features 5 arms.

Bernie himself was in attendance, along with a host of World Champ-ions, team owners, engineers, designers and mechanics from his life in motor racing. The celebrations culminated in a key tributary moment on the balcony of Goodwood House at 3pm on Sunday July 2nd. 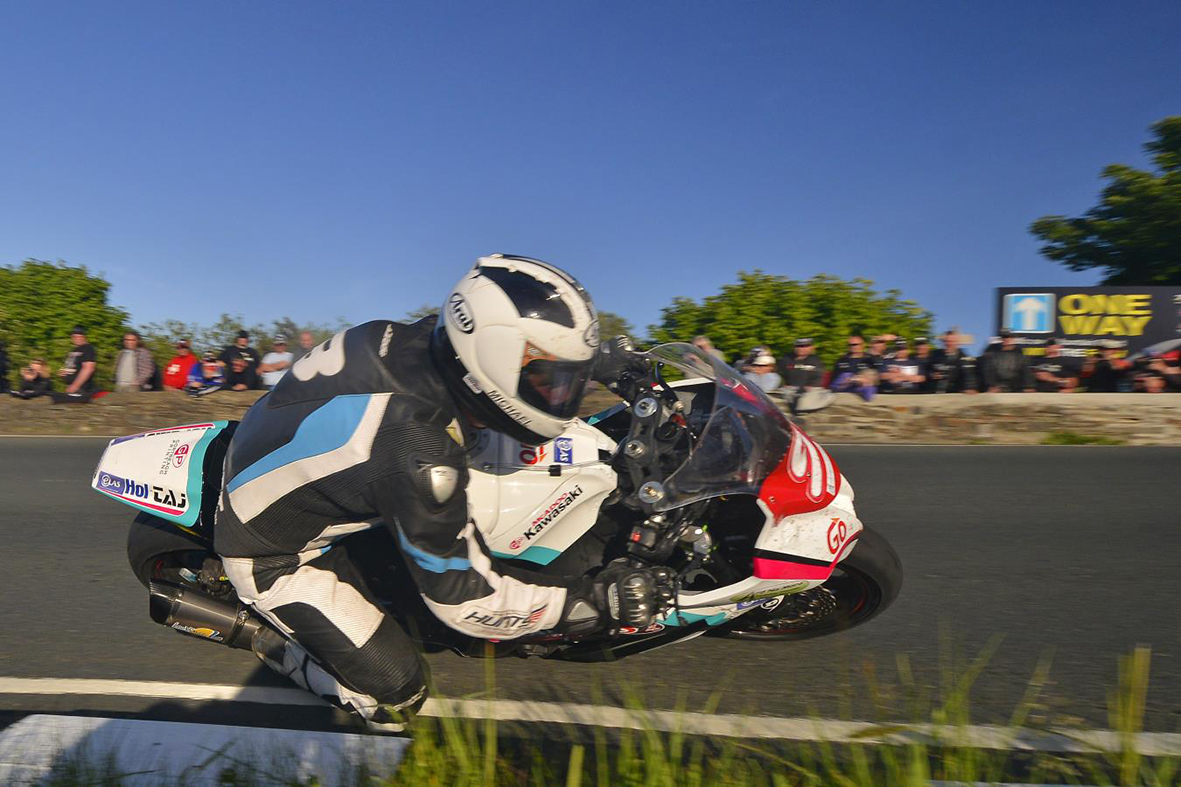 Forty years since ‘Yer Maun’ Joey Dunlop took his first Isle of Man TT victory, the Festival of Speed not only celebrated Joey, but also his brother Robert and nephews Michael and William. With a grand total of 41 TT wins and 37 North West 200s between the quartet, the Dunlops can surely lay claim to be THE first family of road racing.

Also lighting up the Hillclimb direct from the Manx roads was Bruce Anstey aboard the Padgett’s Honda Superbike, James Hillier on his JG Speedfit Kawasaki ZX-10R, Gary Johnson aboard a Triumph Daytona 675, plus Dan Kneen and Jenny Tinmouth who were riding a selection of Joey Dunlop machinery in the Dunlop Dynasty Class

AT THE GOODWOOD REVIVAL 2017

It’ll soon be time to dust off your furs and frocks, tweeds and trilbies, and revel in the most fabulous vintage fashion. The Goodwood Revival will soon be here.

Held at the Goodwood Motor Circuit, the only motorsport venue on the planet to remain preserved in its original form, the Revival attracts visitors, racers and celebrities from all over the world, this year from 8th to 10th September.

Nowhere else can you step back in time and find yourself immersed in the golden era of land girls in overalls, handsome air commanders, char ladies with their hair in rollers, and ’50s housewives with nipped-in waists. Mingle with starlets in red lipstick and nail varnish, crowned in victory rolls, and Twiggy aficionados, all miniskirts and eyeliner.

Such dedicated dressing-up is rewarded in the hotly-contested Best Dressed Competition held on each day of the Revival, where judges award prizes to the most glamorous and authentic outfits. It’s superb. I honestly can’t wait!

LONG AWAITED NEW TVR TO BE LAUNCHED AT 2017 GOODWOOD REVIVAL

A new TVR will be unveiled to the crowds as a global debut at the sell-out Goodwood Revival, this year on SEPTEMBER 8th – 10th.

The iconic British sports car maker, TVR, will be the first manu-facturer to globally launch a brand-new vehicle at the period motorsport event. Created in conjunction with Gordon Murray Design, the 1200kg car promises incredible 200mph performance and 0-60mph in less than 4 seconds. With the special launch edition car being offered at under £90,000, anticipation and demand for the 400BHP per tonne, five-litre, Cosworth developed V8-powered car is already at fever-pitch. The new car will go on display in the ‘Earls Court’ building at the Revival, and will be showcased at the centre of a display which features a number of older, heritage TVRs, in celebration of the brutish, Blackpool marque’s 70th anniversary.