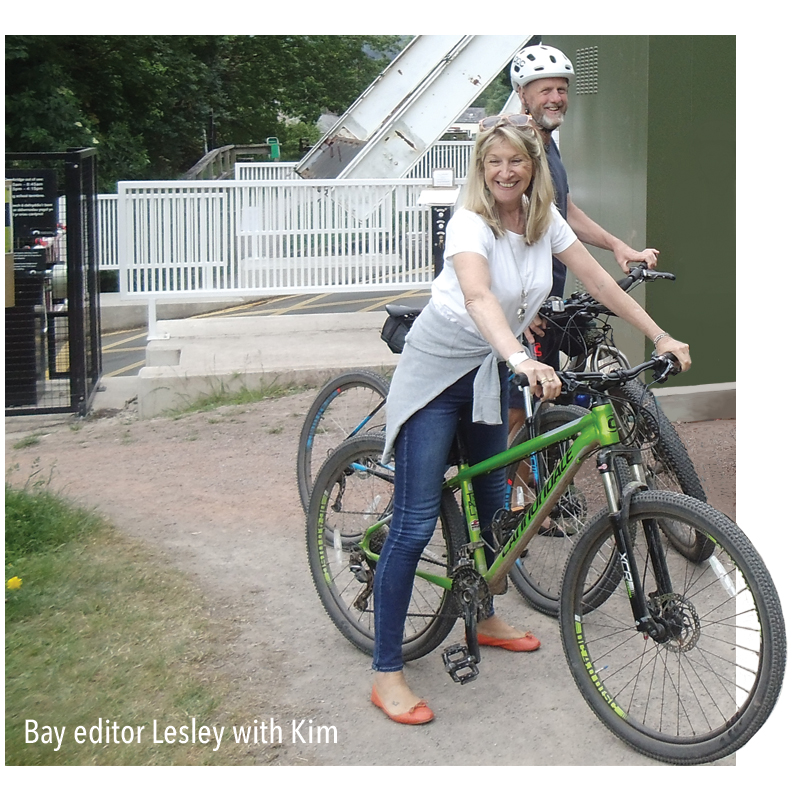 When I received Kim Jones’ copy for his bike ride for August, I read it and thought ‘this sounds like a lovely ride’. So as soon as we had delivered the July magazine to the printer in Merthyr, we continued our journey up to Brecon to see if we could hire some bikes. We found BiPed in Ship Street and who should we meet coming out of the shop with a new tyre under his arm, but Kim Jones! And so it was that we spent a very pleasant day cycling the canal path from Brecon to Talybont on Usk, with Kim.

If you’ve not been on a bike in a long time I can highly recommend this as a gentle initiation into the world of wheels – there are no hills, just flat paths that are completely traffic free. If you don’t have a bike you can hire a tip-top cycle from BiPed for £28 per day – call 01874 622296 for more information.

Aberhonddu is the Welsh name given for Brecon on an Os map; this translates as the mouth of the Honddu, the Honddu being one of the rivers that flow into Brecon. The etymology of the name however is rather interesting. It is said to originate from the name of a legendary 5th century king who went by the name of Brychan Brycheiniog. Now Brychan who happened to be Irish, the name originating from the Gaelic Broccan was a bit of a lad, having an eye for the ladies and who clearly had difficulty making his mind up as he was married 3 times. Now rather conveniently for Brychan, one of his wives Marchel was heiress to the Welsh kingdom of Brycheiniog which she inherited on the death of her father, so your man took on the name Brychan Brycheiniog and claimed the lands. The name Brycheiniog was later anglicised to Brecknock and then shortened to Brecon which seems to have stuck. As an aside though the Brecon Beacons are known in Welsh as Bannau Brycheiniog, Bannau being Beacon, which does beg the question why the town of Brecon is referred to as Aberhonddu. Anyway….

Brecon is a small but busy town which has narrowly avoided the global high street. It has also successfully rebuffed the advances of the Big T; instead hosting a Morrison’s which does a rather fine line in pork pies. Spend some time here and you soon get to recognise and chat with the people of the town, particularly if you frequent certain pubs or cafes. Talking of which The Brecon Tap on The Bulwark is a rather fine inn, owned by Brecon Brewing. If ales and beers are your thing together with some good chat then The Tap is for you. If you happen to have the munchies whilst you’re there they also serve some rather magnificent pies. For the coffee lovers, please, please, please avoid the 2 obvious cafes and instead visit Dugan’s Patisserie in Pegasus Lane (support your independent retailer!) where the cakes are exquisite and the coffee is also particularly good. 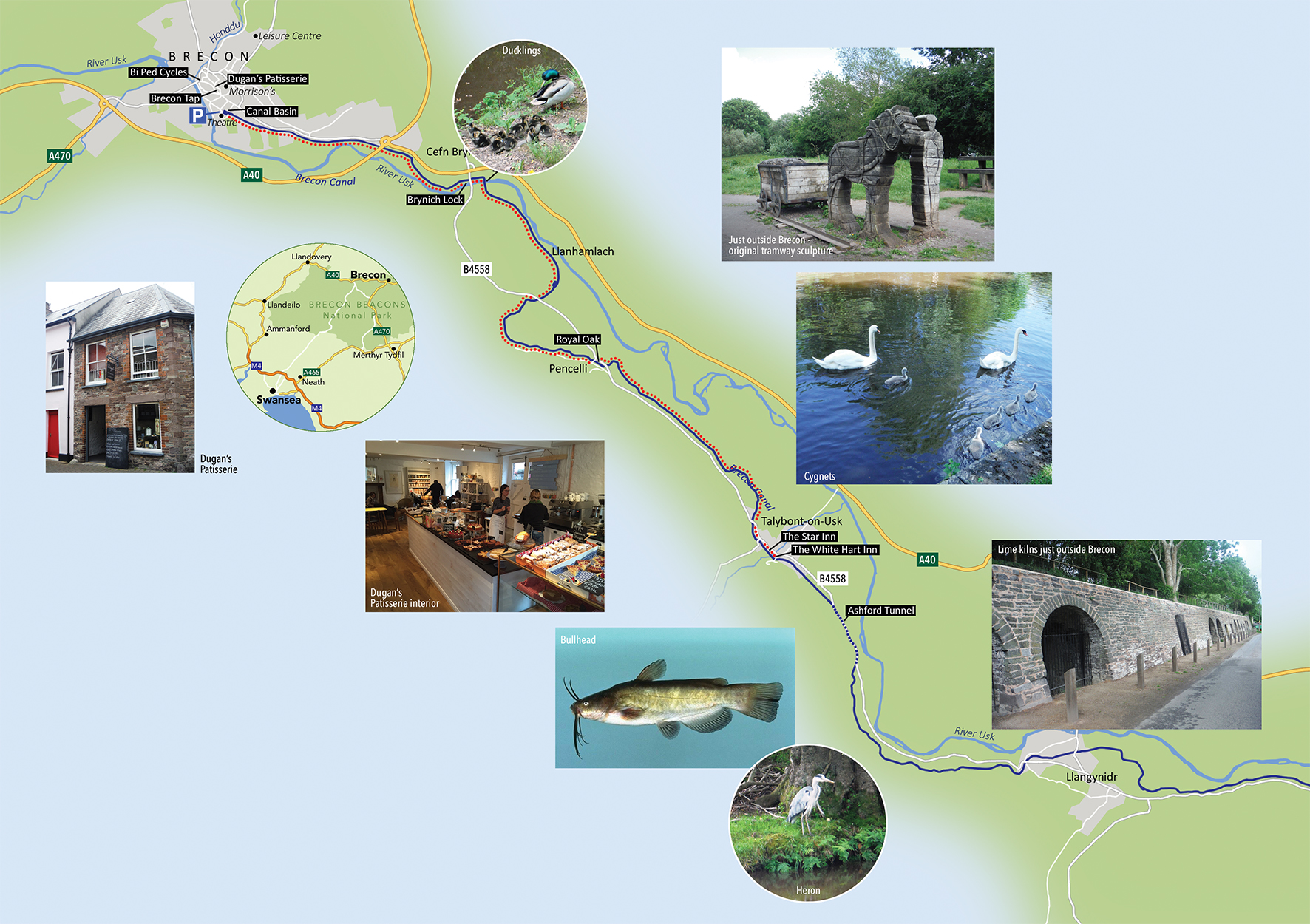 For the children Brecon has its fair share of outdoor parks but if the weather is warm and the sun is shining head for the pedallo’s just upstream of the bridge over the Usk. A weir was created here to feed the canal and this has created a small lake which is ideal for various water sports. It’s also one of the many launch points for the Beacons water trail which allows you to explore the area by canoe, though I certainly wouldn’t recommend paddling the weir, particularly in a pedallo! That brings back a memory which is probably left where it is – lodged deep in the annals of my brain. I was thrilled to learn the upper reaches of the Usk supports one of the largest otter populations in the UK. In addition to otters however the Usk plays host to the rather intriguing looking Bullhead which it must be said is not the prettiest of fish, with looks perhaps more suited to cage fighting rather than romantic dinners. If the weather is being particularly Welsh, there’s also a leisure centre which has some good amenities situated about a kilometre north of the town.

This ride is a simple out and back with plenty of opportunities to turn around and return, either along the canal or on the quiet B road which runs alongside and brings you back to Brynich Lock. Leave your vehicle in the car park by the theatre near the canal basin; this works particularly well as it’s a great incentive for tired children on their cycle back – on their return they can enjoy an ice cream and a play in the park whilst you savour a coffee in the theatre cafe. Having stocked up with supplies from St. Mary’s Bakery (excellent donuts!) leave the theatre heading east and follow the ‘Taff Trail’ signs. The tow path is never narrower than 2 metres and the path is well maintained making for easy and smooth cycling.

Along the way there’s plenty of wildlife to occupy interested minds in particular the kingfisher often to be seen darting amongst the banks. Whilst the ducklings and cygnets are quickly growing into trouble-teenagers they’re still to be seen reluctantly following mum as she mooches along the canal. Surprisingly if you’re patient and remain still the swans will swim over to you, the proud parents keen to introduce their new family. 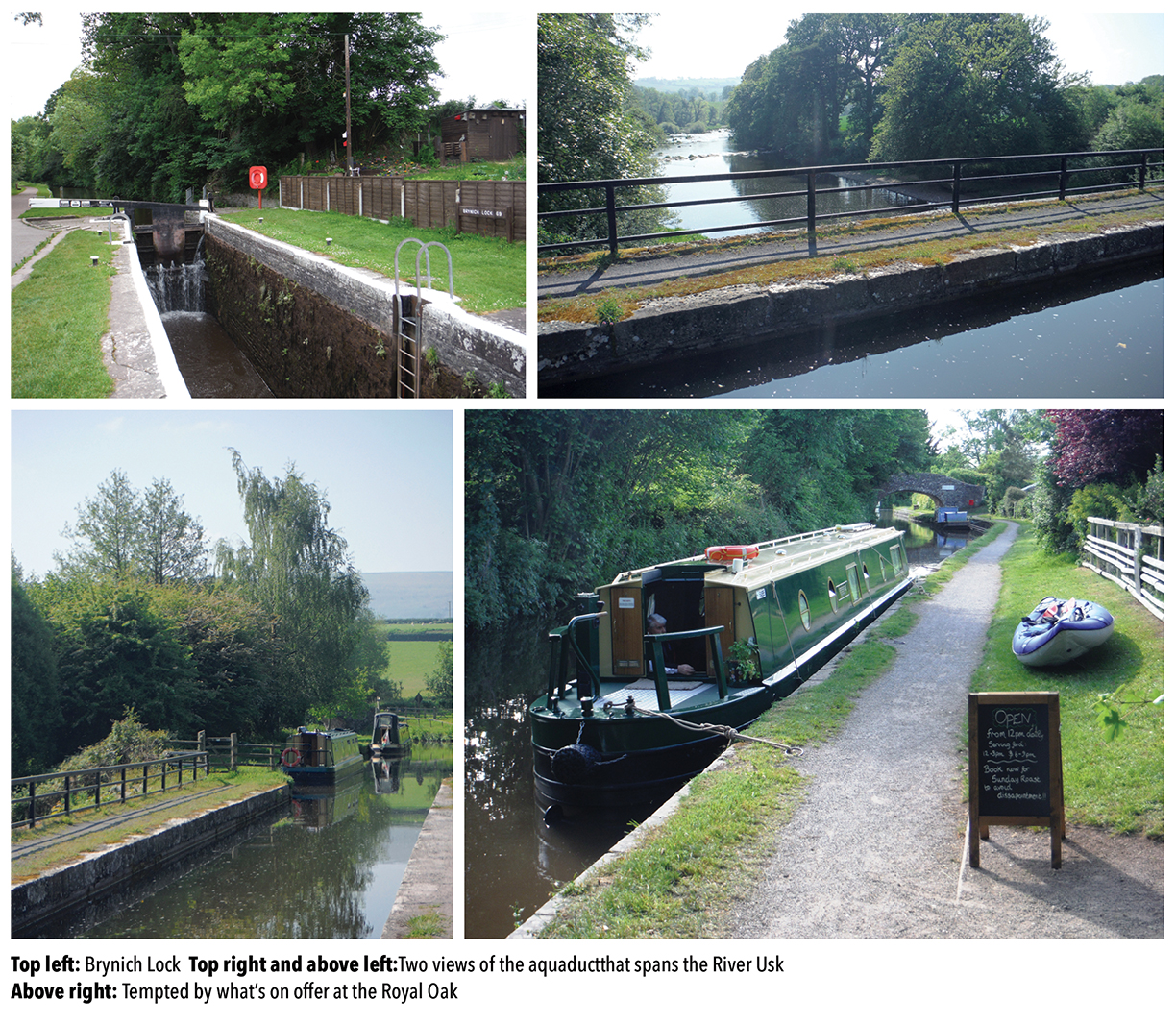 The first real point of interest is the Brynich Lock where most canal travellers will be more than happy to let the children turn the handle which opens the lock, often glad of a helping hand. The canal was opened in 1796 and this is the first of I think 42 locks. Originally built to carry goods from the docks in Newport which included timber, farm produce, beer and lime (the Watton lime kilns are still there below the canal); the canal is now used solely by various pleasure craft. Having had numerous conversations with barge dwellers, I must say I can see the appeal of canal life, in fact as I write this there’s one for sale in Pencelli.

Shortly after Brynich is the aqueduct over the River Usk, a great place to play extreme pooh sticks and if you look up and to the right you are given a different and impressive perspective of Pen y Fan and her cousins, hills that are normally viewed from the west. Moving on you pass through a couple of gates as you cross over the canal on your way towards the Royal Oak in Pencelli whose garden is adjacent to the path. Along the way please take care and remember to duck under the many low bridges, particularly if you are wearing a rucksack as one or two in particular are quite low. Just after The Oak is a bridge, which should you wish, gives the first opportunity to make your way back. 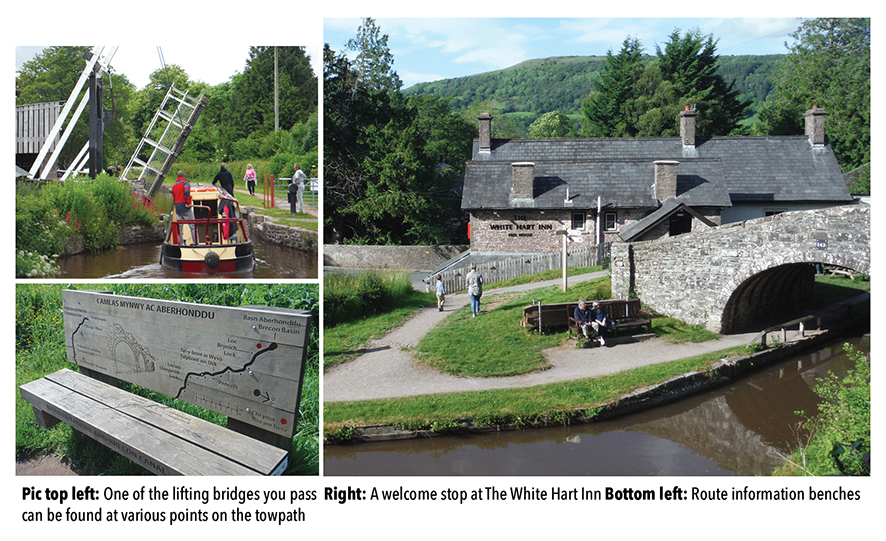 Press on however and your next port of call is the village of Talybont. Here the canal passes under another lifting bridge and it always puts a smile on my face to see the look of absolute joy on child passengers as they wait in their car and watch the barge motor sedately by.

Talybont is blessed with 2 pubs, a café-cum-store and a bike shop; also being some 12km from Brecon it is an obvious turn around point for young cyclists. If you choose to go further though, just over a km away is the Ashford tunnel. There is no tow path here but there’s a short trail which takes you over and around. Back in the day on approaching the tunnel, the barge pilots would lie on their backs and walking their legs along the roof and sides ‘leg’ the barge through the tunnel. From here on towards Llangynidr the canal has a different feel to it, possibly because the tow path has less traffic but also the serenity the wooded areas seem to bring. It’s probably worth mentioning that if you’ve travelled this far it might be worth considering your return journey as you’ve now cycled around 17km. It was here returning to Brecon one day I stopped to chat with a chap who on my approach had grabbed his dog, an interesting looking cross between a bull terrier and a whippet. 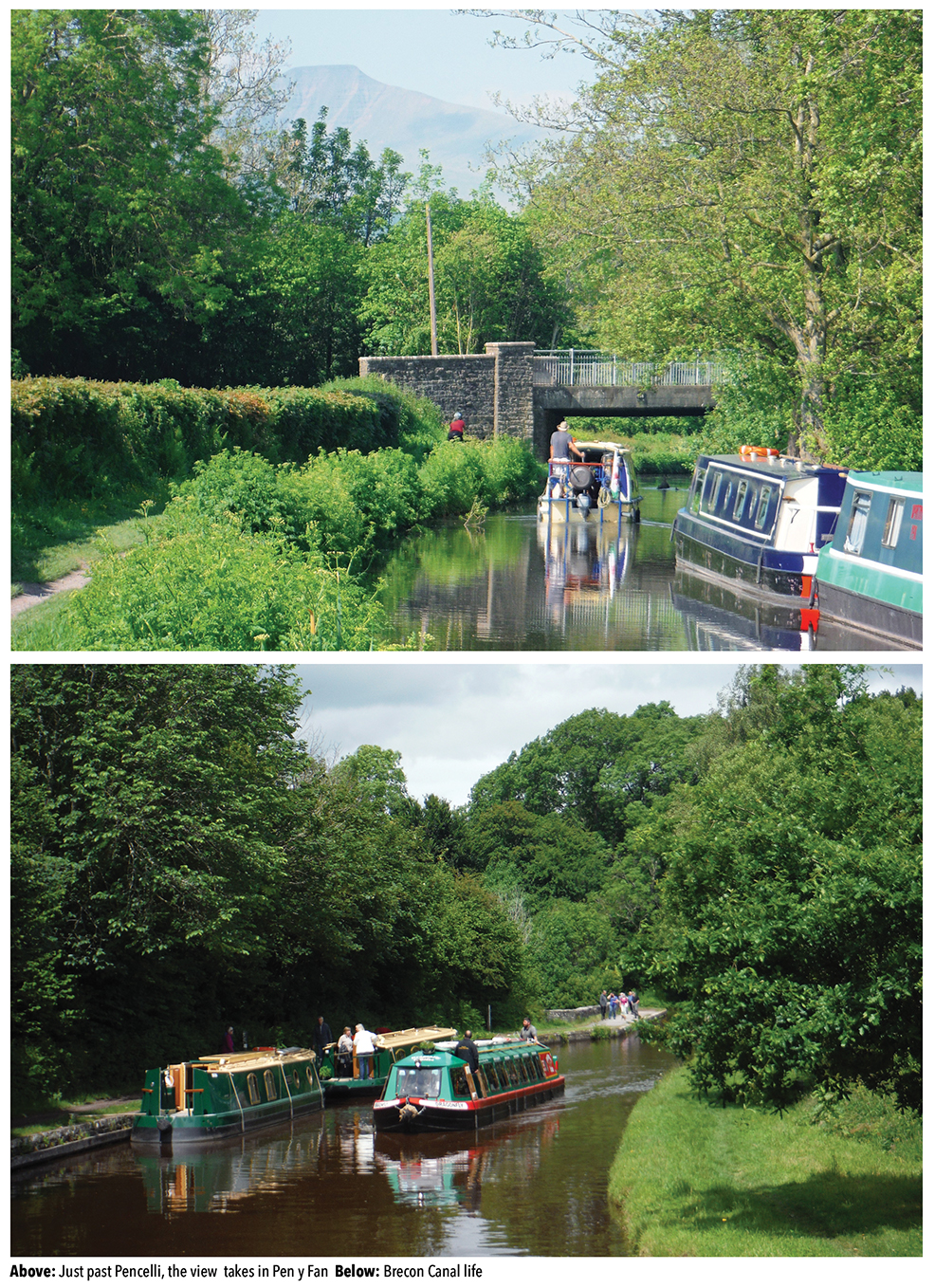 He explained as he released the dog how he loved to run with cyclists, any cyclist. As we chatted I happened to glance down as the dogs ears pricked up and a few seconds later a man on a bike came past us. The dog shot off in hot pursuit, completely oblivious to his owner calling his name. The man made his apologies and ran after the dog; the last I saw of him was as he disappeared around the bend shouting at the guy on the bike: “For the love of God, will you please stop so I can grab my dog!”

Tow path cycling can be a very sociable pas-time and with plenty of refreshment stops along the way this route makes for an enjoyable family day out. If you decide to make a weekend of it, there are campsites at, Brynich, Pencelli and Talybont.