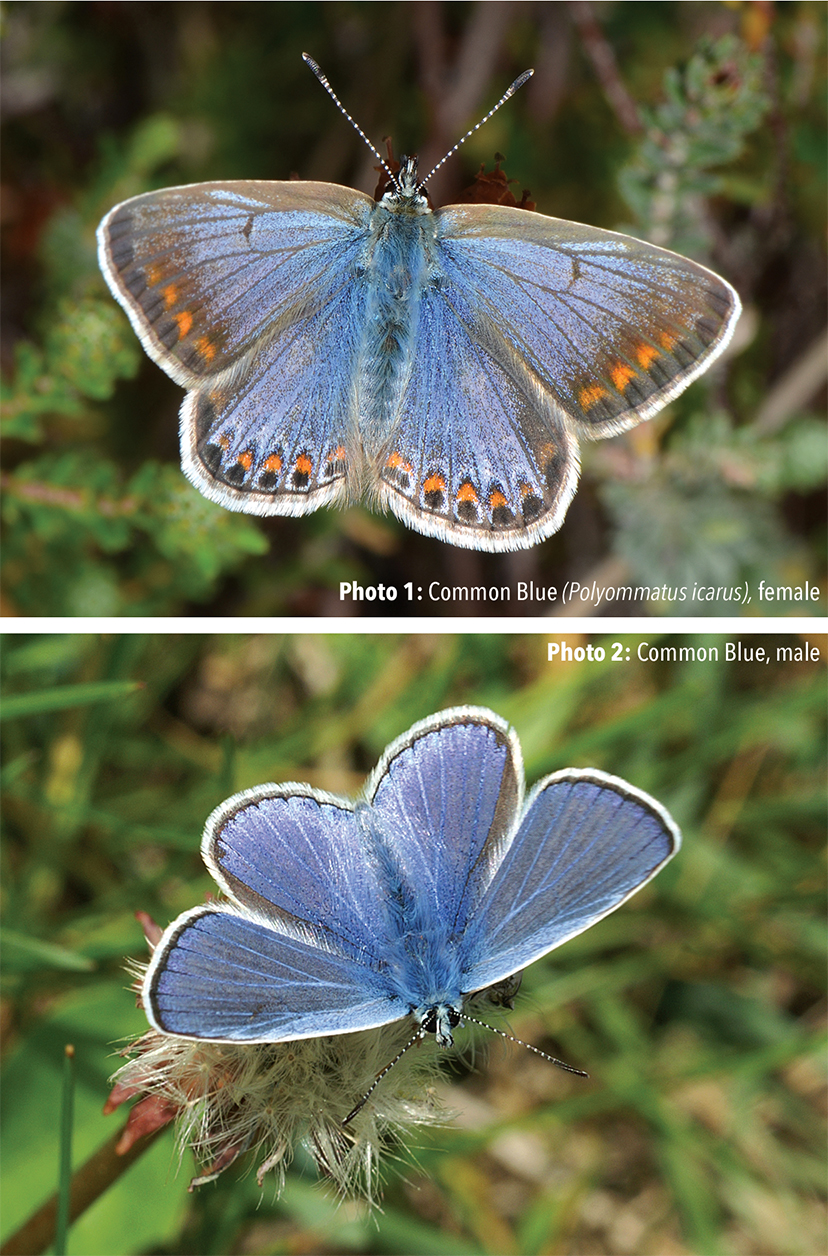 Just as the days are starting to grow shorter, the bright colours of summer fade, and the melancholy of autumn is looming on the horizon, a new generation of delightful fluttering jewels bursts upon the scene, allowing us to hang on to the joys of summer that little bit longer.

Many members of the family Lycaenidae – which in Britain comprises the blues, the coppers and the hairstreaks – have two, or sometimes even three, generations per year. As a result, a number of species can be seen out and about well into October if the weather conditions are favourable.

Fifteen species belonging to this family of dainty and elegant butterflies are native to Britain, and eight of these can be found on Gower. The most familiar is probably the colourful Common Blue (Polyommatus icarus). The Common Blue breeds in a range of open habitats that sustain its preferred larval foodplants Bird’s-foot Trefoil and White Clover. The females possess variable amounts of blue, often less than the female shown in photo 1, and always considerably less than the bright blue males (photo 2). The intricately pattered underside of both 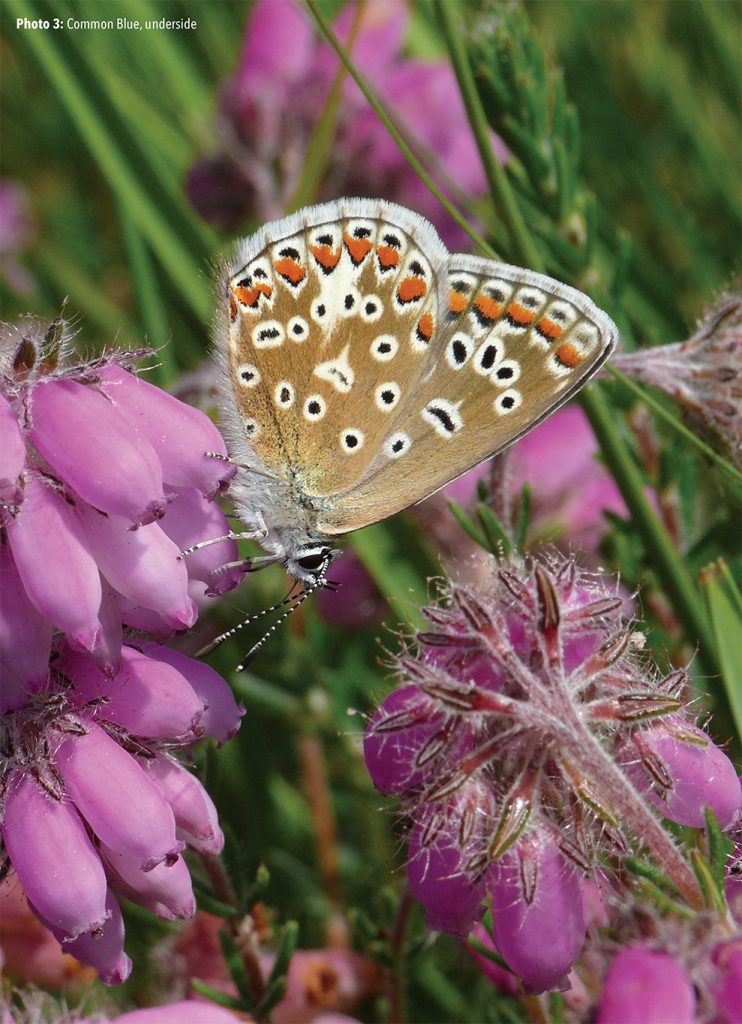 the males’ and females’ wings is quite distinctive (photo 3).

While Common Blues can often be seen feeding on flowers, the Holly Blue (Celastrina argiolus) generally prefers to feed on honeydew produced by aphids high up in trees and is therefore often over-looked. When a Holly Blue is spotted, the large amounts of black on the females’ wings (photo 4) and the silver-and-white appearance 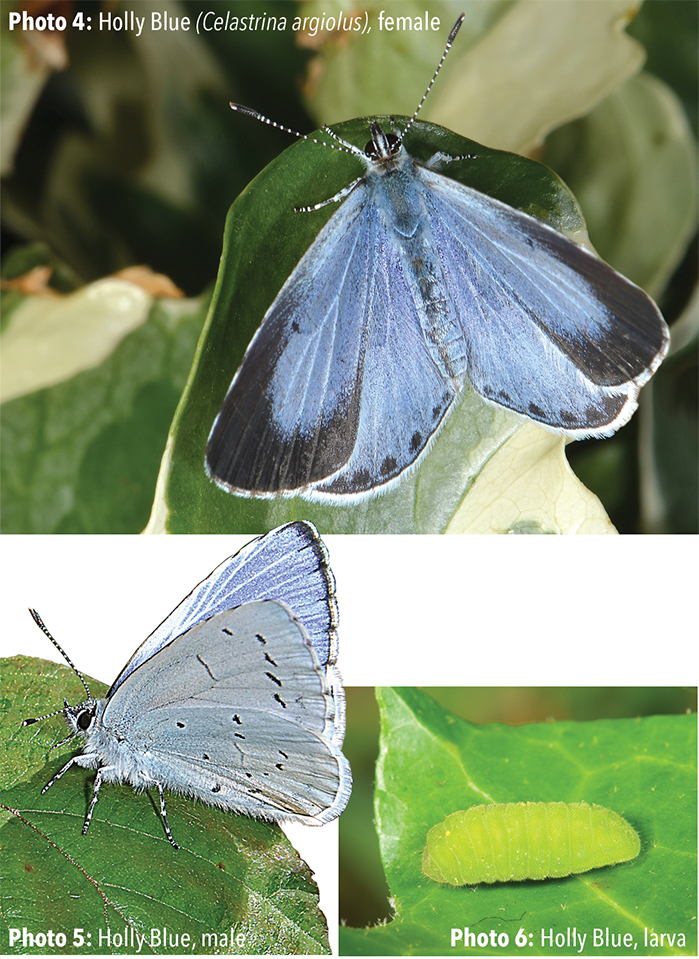 of the under-wings in both sexes (photo 5) help to distinguish it from most other blues. Very often, the habitat in which it is encountered is also a give-away, as the Holly Blue is much more closely associated with trees than other blues, its preferred larval foodplants being holly and ivy. Its caterpillars dis-play the unusual, squat body shape and tucked-under head typical of larval Lycaenidae (photo 6). 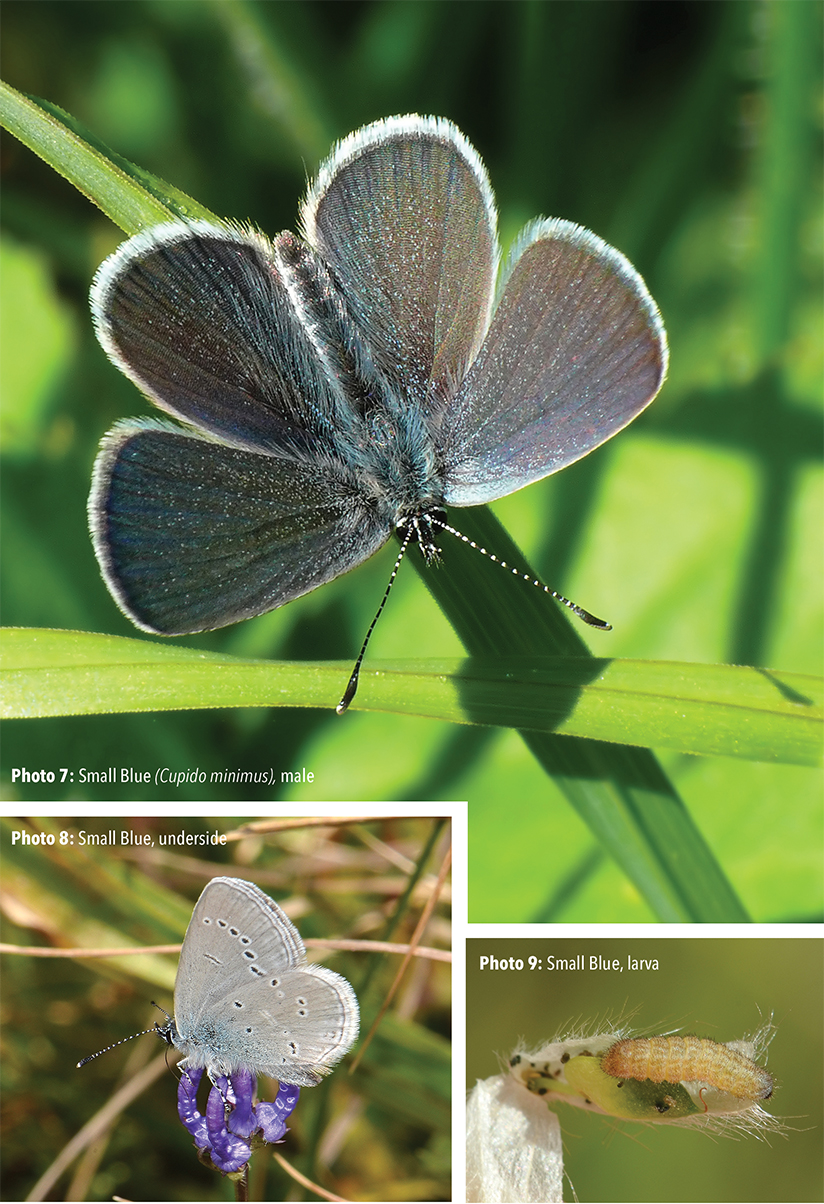 Small Blues (Cupido minimus) are the smallest British butterflies, reaching a maximum wingspan of just 27mm. Despite their name, they possess very little blue, and only newly emerged males have a dusting of blue scales on their otherwise slaty brown wings (photo 7), with the females being plain brown from the start. The undersides of their wings are vaguely reminiscent of those of the Holly Blue, with small, white-edged black markings on a pale grey background (photo 8). Small Blues do not venture far from their home site, and usually remain within around 40 metres from where they emerged. From late afternoon, adults start to congregate in communal roosts in sheltered areas of long grass, where they rest head-down until morning. Its tiny caterpillars live exclusively in the flower heads of Kidney Vetch, where they feed on the florets and the developing seeds (photo 9). 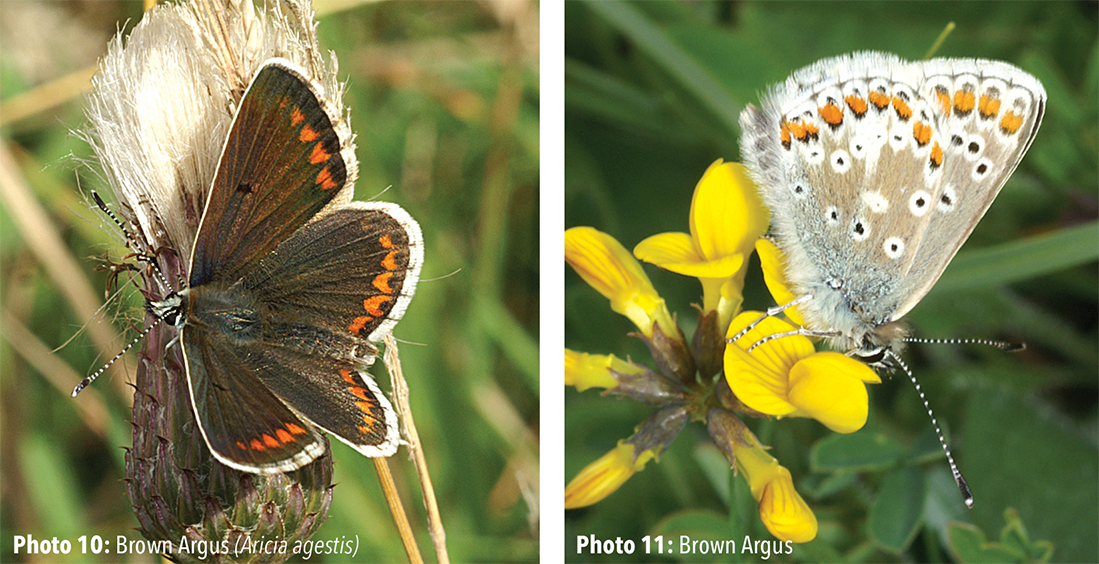 There is one more resident blue butterfly on Gower, but this species likes to remain incognito. The Brown Argus (Aricia agestis), as its name suggests, displays not even a hint of blue in either sex (photo 10). Both sexes are brown with very similar orange markings, and only the undersides of its wings give the Brown Argus away as a member of the blue subfamily (photo 11). It is usually found in mainly grassland habitats where its larvae preferentially feed on Common Rock-rose and, in the absence of the former, Dove’s-foot Crane’s-bill and Common Stork’s-bill. 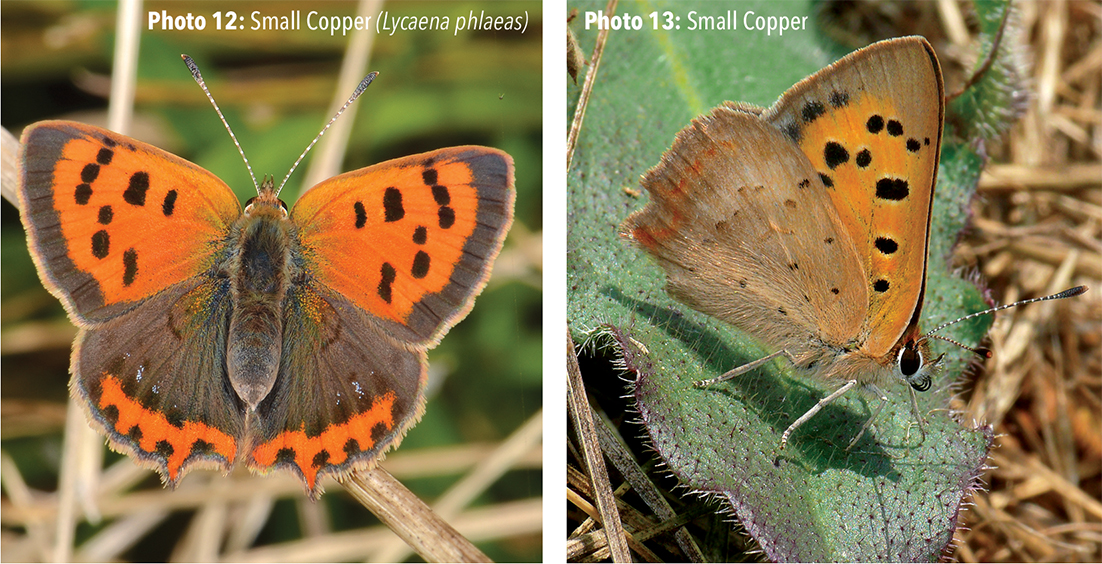 The shimmering Small Copper (Lycaena phlaeas) (photo 12) is another species that likes open habitats, where its caterpillars develop on Common Sorrel and Sheep’s Sorrel. Male Small Coppers have the unusual habit of setting up small territories on a flower head, a stone or a patch of bare ground, in which they bask and await passing females. Any other insects that venture into their patch are aggressively chased off. There is little difference in appearance between the sexes, and the spotted under-wings are faintly reminiscent of – but easily distinguishable from – the related blues (photo 13). The Small Copper is unusual in that it regularly produces three generations per year, so adults can be seen almost continuously from spring until well into autumn. 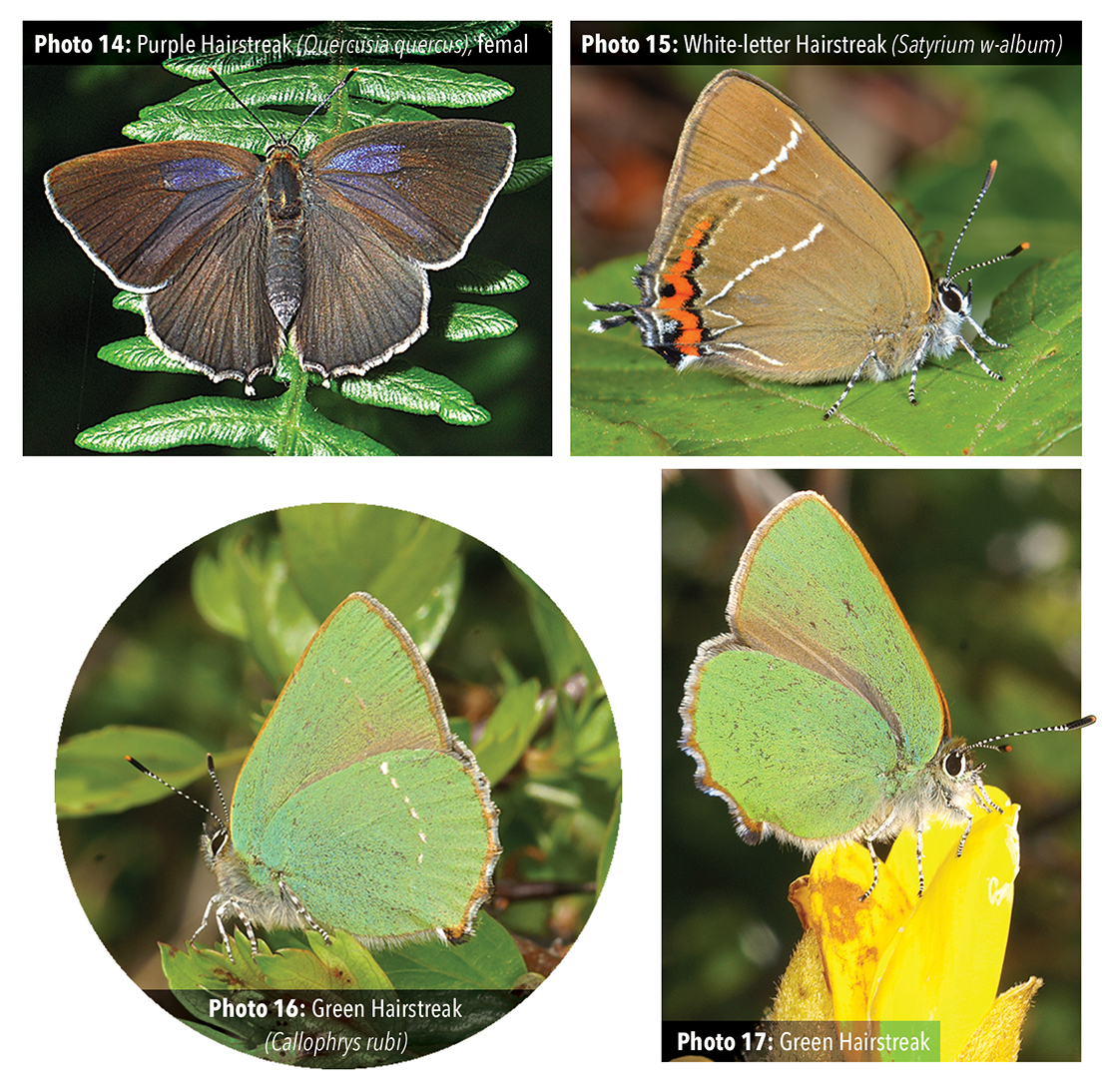 The hairstreaks, on the other hand, only have one generation per year. Of the three hairstreak species found on Gower, only the Purple Hairstreak (Quercusia quercus) can occasionally still be seen as late as September. This species is an unusual shade of purplish black with an attractive metallic sheen, which is confined to the base of the forewings in females (photo 14). Purple Hairstreaks are almost invariably encountered in association with large oak trees, where its caterpillars feed on the foliage, and the adults take advantage of the honeydew produced by aphids in the canopy. They often go unnoticed, spending their lives high among the branches, but sometimes on warm summer evenings they can be seen performing a dancing flight around their trees.

Hairstreaks are named for the thin white line running across the underside of their hind wings. In the aptly named White-letter Hairstreak (Satyrium w-album) this line is w-shaped and very distinctive. Identification is made easy by the White-letter Hairstreak’s habit of always resting with its wings closed, with the dark brown upperside of its wings consistently hidden and its distinguishing feature permanently on display (photo 15). Males and females are almost identical in appearance. The White-letter Hairstreak, too, is a species of woodlands, where it is entirely dependent on elms for its larval development. Like the Purple Hairstreak, it is rarely seen because it spends most of its time in the canopy. In addition, adults are only around for a fairly short period, usually from June to August.

The Green Hairstreak (Callophrys rubi) emerges even earlier and can sometimes be seen as early as April, and rarely later than July. Like the White-letter Hairstreak, it always rests with its wings closed, hiding the brown uppersides, while the beautiful iridescent green undersides make for excellent camouflage (photo 16). Again, there is very little difference between the sexes. Contrary to the other hairstreaks, the Green Hair-streak usually flies low and can often be seen fluttering around or perching on shrubs such as gorse, which is also one of its larval foodplants. This species is also unusual in that it is not restricted to one foodplant, but is instead able to develop on a fairly wide range of low-growing and shrubby plants. There is some variation among Green Hairstreaks with regard to their white markings. Not all individuals possess the typical continuous fine white line. In many cases it is broken, reduced to a series of spots, or even altogether absent (photo 17). With or without its marking, this is a delightful species, well worth looking out for on a country walk next season. In the meantime, its late-flying relatives are here to keep us company, helping to keep the autumn blues at bay a little longer.

Photos courtesy of Paul D. Brock. His latest bestseller A comprehensive guide to Insects of Britain & Ireland (Pisces 2015) covers more than 2100 species and is available from: www.naturebureau.co.uk/bookshop Tel: 01635 550380