In the past couple of months we’ve been featuring the film reviews by Emlyn Harries-Roberts. Not all of the films that we have reviewed have been available to watch in our Swansea cinemas. We’ve contacted both Vue and Odeon cinemas and have been told that not all films are screened countrywide. In our opinion it is a travesty that we are shortlisted for the title of City of Culture in 2021 and yet are not considered for anything other than mainstream films. Fortunately we have the Taliesin that does show some of the less commercial works – see www.taliesinartscentre.co.uk for details.

Emlyn Harries-Roberts’ film review for September is a gruesome murder mystery story, which has to be solved without the benefit of modern technology. 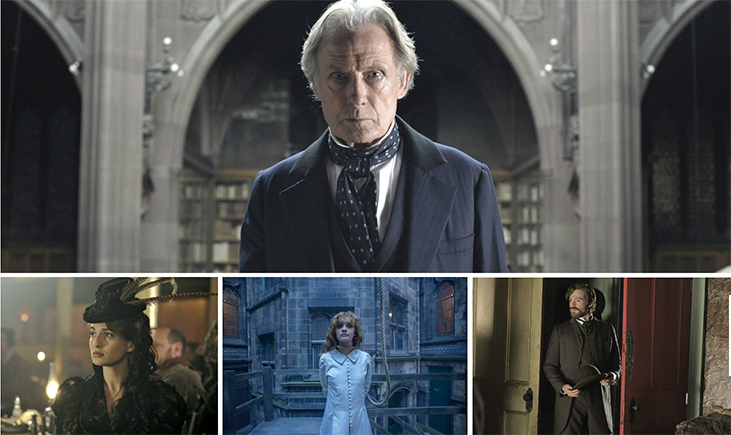 There’s something about Victorian London that’s always lent itself well to murder mysteries, whodunits and detective stories. The sheer darkness of the city, both in the absence of electric lighting and the unpleasantness of the times, works to the benefit of pulpy yarns about trying to track down a vicious serial killer, and there’s no denying that the lack of phones, Google and CSI teams makes for good drama as well. So if you’re in the mood for a twisty, lurid and surprisingly (and satisfyingly!) gruesome detective tale, The Limehouse Golem may be just what you’re looking for.

The ever-delightful Bill Nighy stars as Inspector John Kildare of Scotland Yard, who’s been sent to investigate a series of murders in London’s Limehouse district that are so brutal and savage, people think they’re the work of a Golem, a Frankenstein’s monster-esque creature from Judaic mythology. There are four suspects, one of whom has recently died, and whose wife Elizabeth is suspected of killing him, leading John to try and prove her innocence while also tracking down the Golem.

It’s safe to assume that Victorian London was not a particularly enjoyable time and place to be alive, and one of the most appealing things about The Limehouse Golem is its willingness to lean into the grimness of its setting where you might expect it to shy away from it. It’s richly atmospheric, with the dank, dirty quality of the city seeping from every frame as Kildare and his assistant George Flood go patrolling the lamplit streets after dark; and has a rather striking line in unexpectedly gruesome kills which do a lot to keep the audience interested when the film might reasonably have been expected to keep them off-screen. It’s not sanitising what it must have been like to live in this era of London, and it’s to the film’s great credit that it doesn’t dilute its horrors.

Victorian England being what it was, it’s especially nice to see Kildare’s growing bond with Elizabeth, one of a great many women of the time forced to exist in the shadow of men and not permitted any real agency of their own. Olivia Cooke does excellent work in the part, further establishing herself as an exciting talent worth keeping an eye on, as an embattled young woman facing appalling adversity largely because she is a woman. Coupled with the occasional hints that Kildare is being set up to fail because the higher-ups suspect he’s gay, it becomes a very effective little story about underdogs trying to carve out a niche for themselves in a world that doesn’t value them. Nighy is great in more or less everything and he’s particularly good here as a genuinely decent person in a horrible situation, with just enough of the dandy about him to make the rumours about Kildare plausible.

It moves along at a good clip, rarely pausing long enough to allow the pace to flag, although it could possibly do with a little more time to flesh out the suspects of the Golem case. Not unlike Tinker, Tailor, Soldier, Spy, two of the four possible culprits get so little screen time that you’ll instinctively write them off in very little time at all – although amusingly, Kildare himself does comment on how absurd it is to believe that one particular suspect could be out murdering people in the dark. The twists may be a little telegraphed in places, but the ultimate reveals still manage to be genuinely shocking and more than a little unsettling.

The Limehouse Golem is perhaps not high art, but it is an extremely entertaining, rewardingly pulpy whodunit that does a very effective job of wrong-footing its audience. Apart from anything else, it’s refreshing to watch a straightforward detective story where the focus is firmly on the case, in contrast to the latter seasons of Sherlock, for instance, which had an unfortunate tendency to disappear into tedious angst and navel-gazing. There’s no pretentiousness or desire to put on airs here – it’s content to be a relatively simple, lean film which keeps its focus on the plot. And a whodunit is nothing without a strong plot, which serves The Limehouse Golem very well indeed.